One of the greatest games of all time is finally on Switch, and it's better than ever 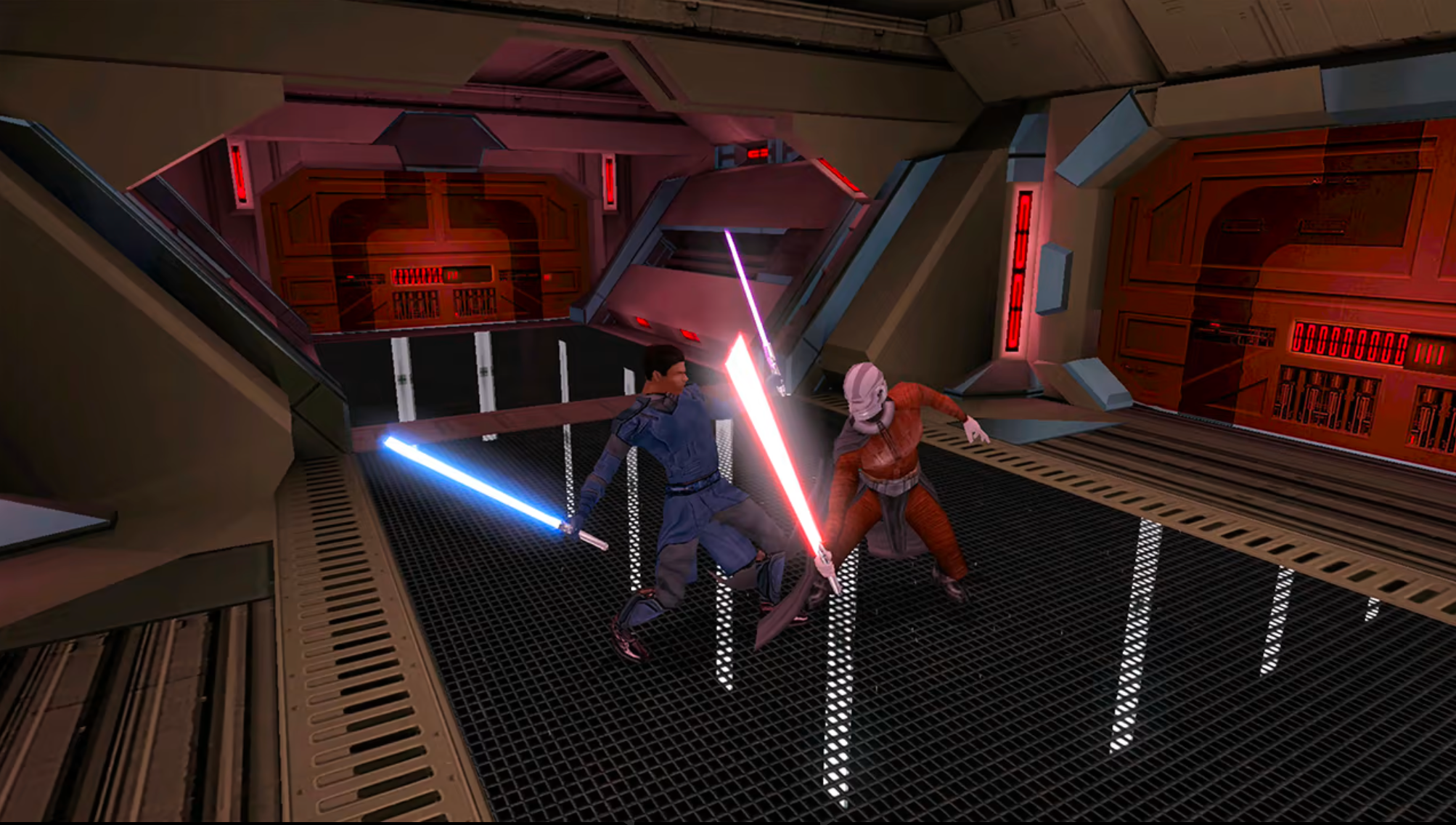 My lifelong love of RPGs started with Star Wars: Knights of the Old Republic.

The critically-acclaimed game from Canada’s own BioWare Edmonton totally engrossed me when I first played it at 10. I’ve since made a habit of replaying it every few years, and now, thanks to a recently released port from publisher Aspyr Media, I’m happy to now be able to do that on Nintendo Switch.

In case you’ve never played it, KOTOR lets you create your own Republic soldier (and, later, Jedi) who assembles a team to stop Darth Malak and the Sith from taking over the galaxy — thousands of years before the Skywalker Saga. It’s a classic Star Wars story, but it’s one that still feels fresh after all these years precisely because it’s unrelated to other media.

If you’re someone like me who has gotten absolutely fed up with practically every modern Star Wars story being, in some way, connected to that same damn family, KOTOR will feel like a breath of fresh air for fans and newcomers alike. That’s to say nothing of the game’s iconic, mind-blowing Empire Strikes Back-level twist that I won’t dare spoil here. Of course, the Light Side/Dark Side choices you can make are fairly binary in 2021, but they still fit the overall moral simplicity of Star Wars.

In any case, characters are far more important than plot, and thankfully, KOTOR has such a rich, superbly written cast that includes the Mandalorian bounty hunter Canderous Ordo, the hilariously homicidal droid HK-47 or the sardonic and morally grey former Jedi Jolee Bindo. These characters offer more nuance to the world outside of the classic Jedi-Sith conflict.

That strong writing extends to the locations you visit, which are diverse and flesh out the world of Star Wars in clever ways, be it the bustling prejudicial city of Taris, the ominous Sith Academy of Korriban or the serene Jedi Academy on Dantooine. And even when compared to modern games, KOTOR‘s litany of sidequests — ranging from a Romeo and Juliet-esque conflict between two lovers’ families, a fascinating murder mystery and trial and a trippy game of riddles — remain remarkably compelling. 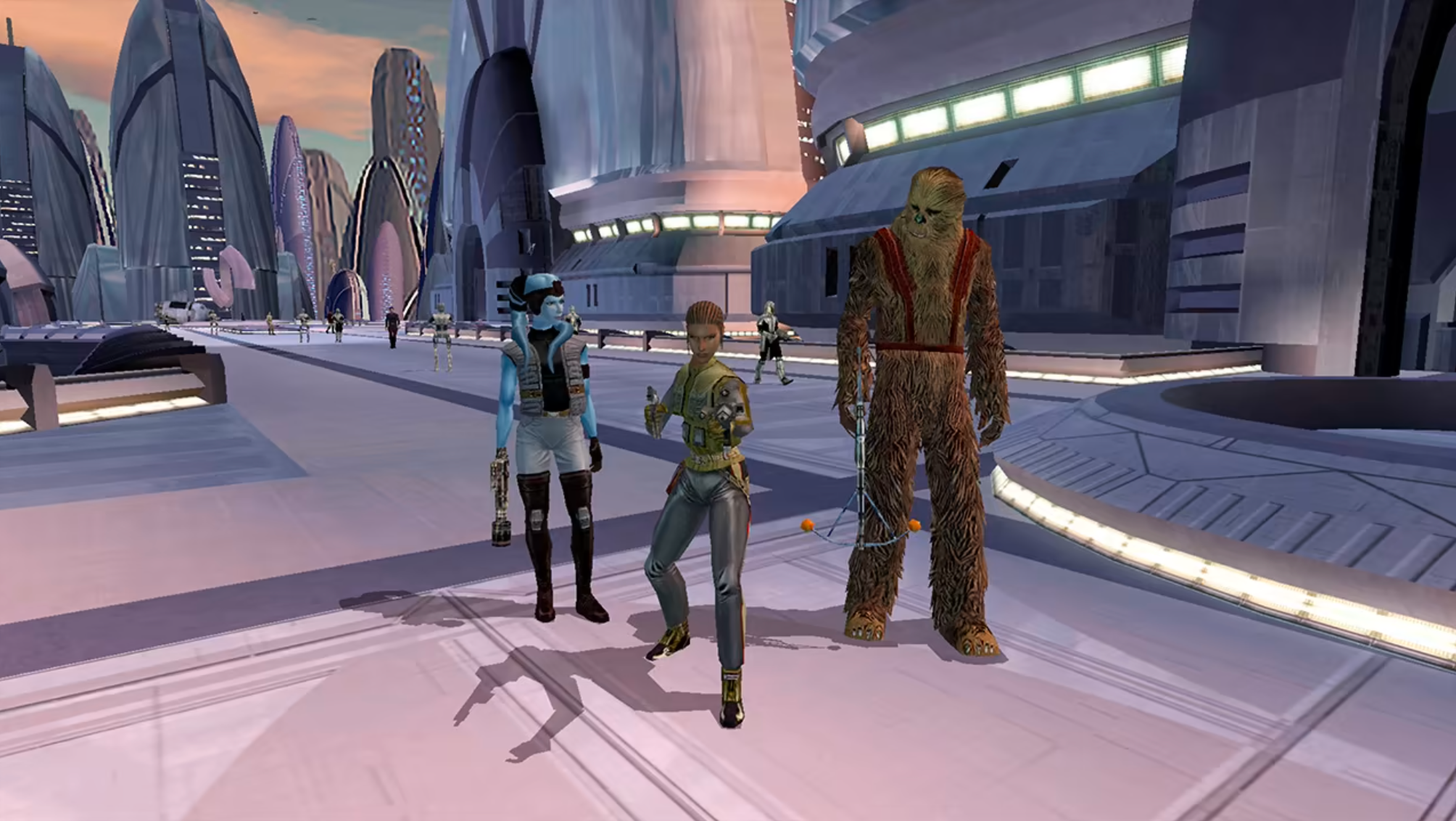 Gameplay-wise, KOTOR doesn’t hold up nearly as well as its writing, but it’s still quite solid. In practice, the game plays like a real-time action-RPG, although it’s really a turn-based system, as characters’ attacks are placed in queues. Behind the scenes, damage is calculated using Dungeons & Dragons‘ D20 system, which leverages dice rolls and modifiers based on your stats. It’s here that KOTOR remains a fairly deep RPG, even nearly 20 years later.

The game offers a well-balanced progression system in which you can’t unlock every ability in a single playthrough. This means you have to be mindful of where you invest points; personally, this meant focusing on dialogue-influencing ‘Attributes’ and ‘Skills’ like ‘Charm’ and ‘Persuade,’ and ‘Force Power’-enhancing Feats like ‘Jedi Defense.’ KOTOR further things up by giving you a wide variety of weapons, like ‘Blasters,’ ‘Vibroblades’ and ‘Lightsabers,’ as well as abilities to enhance the effectiveness of each, such as ‘Charged Shots’ or ‘Critical Strikes.’ Of course, ‘Force Powers’ like ‘Force Push,’ ‘Force Heal’ and ‘Force Lightning’ are just icing on the cake. 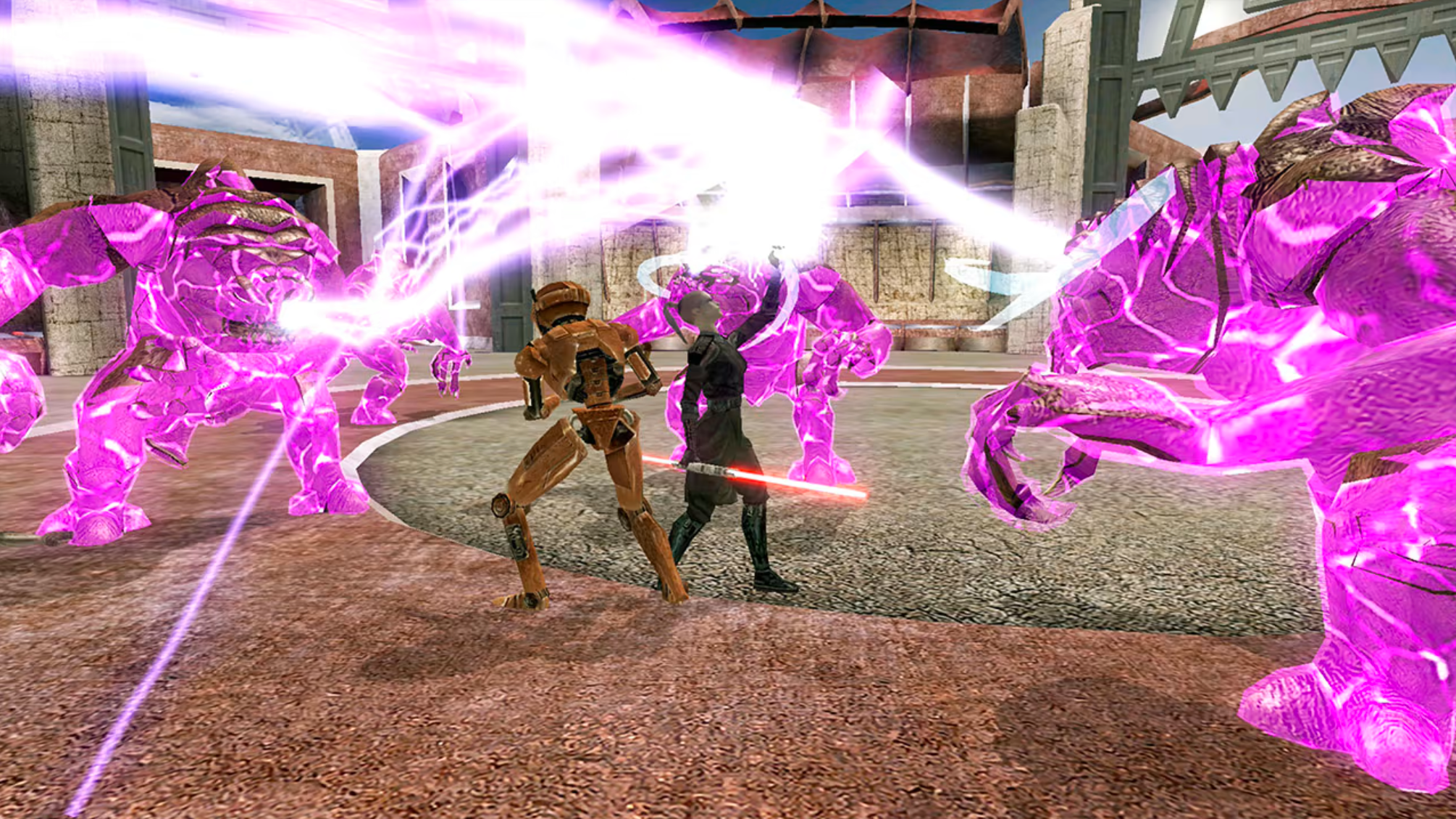 All of this is preserved in its entirety in the Switch port. Having seen how Rockstar recently completely botched its remasters of the iconic GTA Trilogy, I appreciate how Aspyr opted to leave KOTOR on Switch as is. Instead, there are small improvements like a crisp HD sheen and consistent 60fps. I booted up my copy of KOTOR on my Xbox Series X to compare, and the Switch port definitely looks better than that backwards compatible version. Of course, you should keep in mind that this game is nearly 20 years old, so character models, animations and environments won’t be very detailed or expansive by today’s standards.

The portability factor, naturally, makes the game even more appealing. While KOTOR and its criminally underrated sequel are both on Android and iOS, I’m not someone who really enjoys gaming on mobile. For that reason, I love being able to have KOTOR on the Switch, with the added benefit of playing on a TV while docked if I so choose. Across both methods of play, the game ran well with no issues. 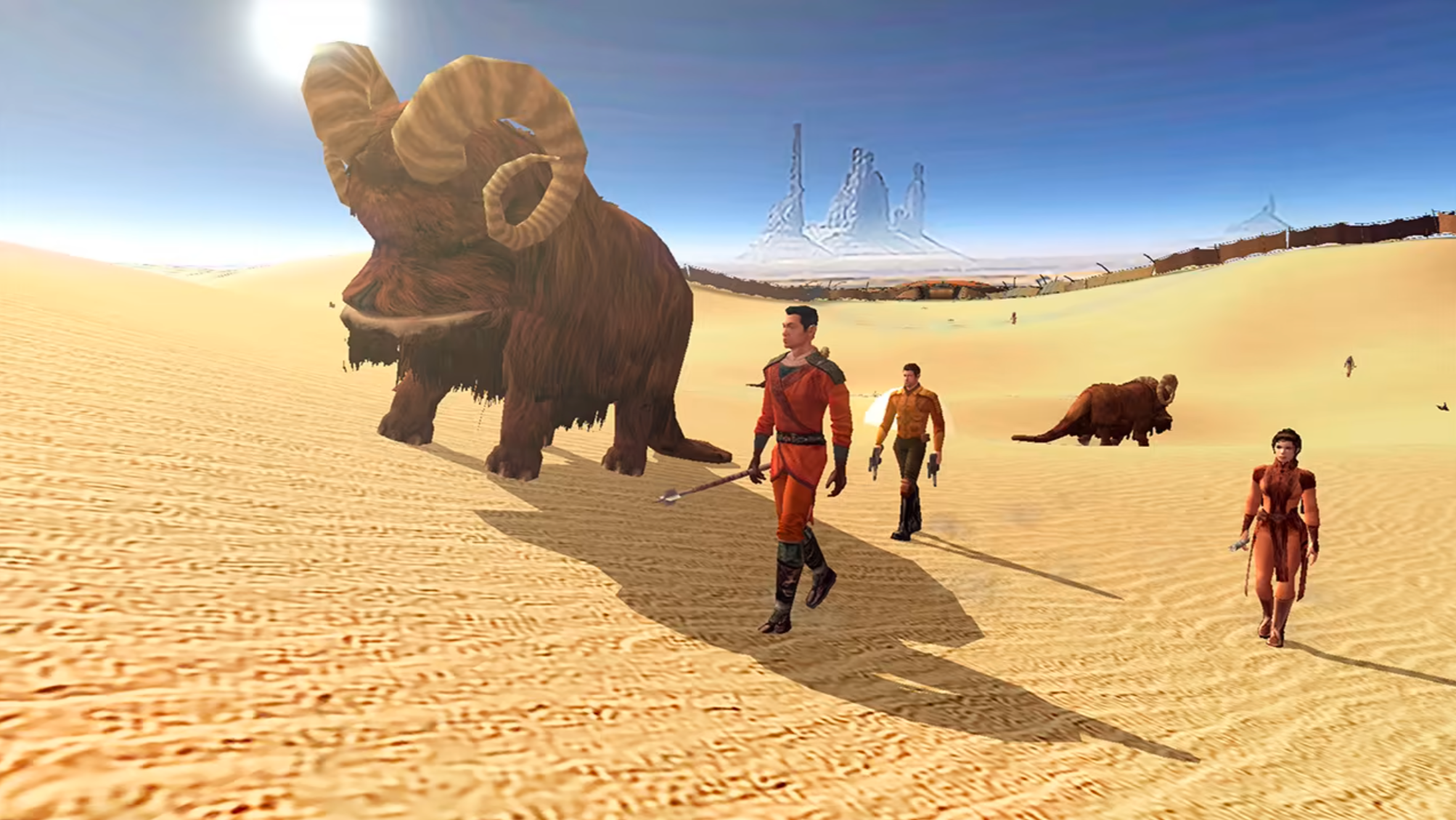 Having said all of that, I do still wish that Aspyr made some smaller quality-of-life improvements with this port. For example, it would have been nice if footlockers and other objects could have a marker to indicate that you’ve already looted them. This is something that was introduced in KOTOR II, but was sorely lacking in the original.

And after having played the modern console ports of Final Fantasy games like VII and IX, I feel that KOTOR on Switch really could have benefited from some sort of “times-three” speed increase option. While you can use the unlockable Force Speed power outside of combat for a boost, it’s not as elegant a solution as a permanent speed increase.

But really, these would have just been bonuses. The core 30-hour experience has been faithfully retained, as BioWare created it, and that’s worth celebrating. There’s a reason this is heralded as one of the greatest games of all time — from outstanding writing and voice acting, fascinating planets to explore and surprisingly robust character progression.

Whether you’ve never played KOTOR before or just want to revisit BioWare’s original masterpiece before Aspyr’s PS5 remake, the Nintendo Switch version is a great option.