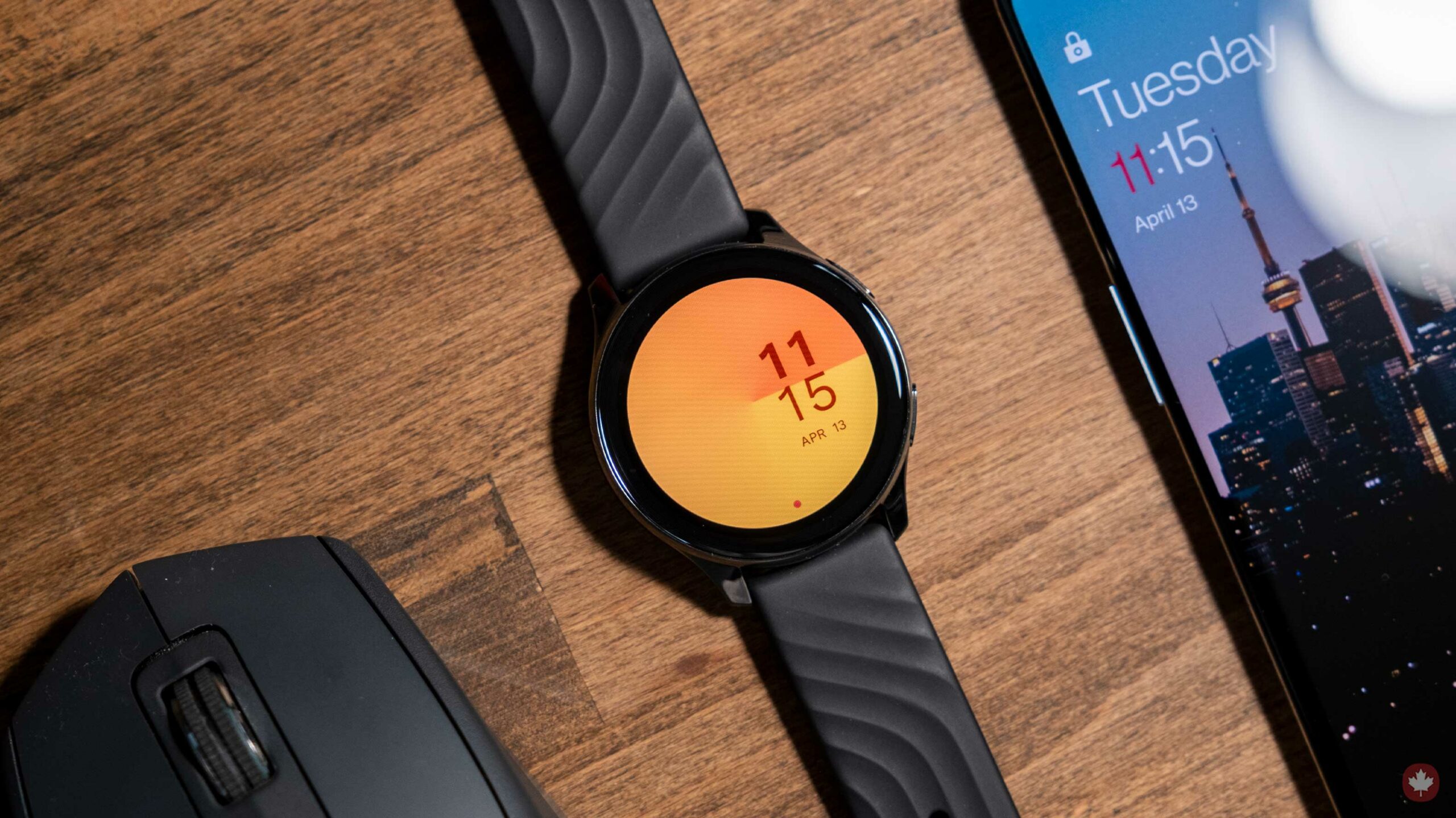 A smartwatch is a weird device to review right now.

Pretty much everything about the OnePlus Watch pales in comparison to the Apple Watch Series 6, but many companies like Fitbit and Garmin have been able to carve out niches for themselves by creating fitness trackers with smartwatch capabilities.

That’s what OnePlus is trying to do with the OnePlus Watch, and in some ways, it succeeds, but you’ll need to temper your expectations if you were hoping the wearable would compete with the Apple Watch or a Fitbit Versa. 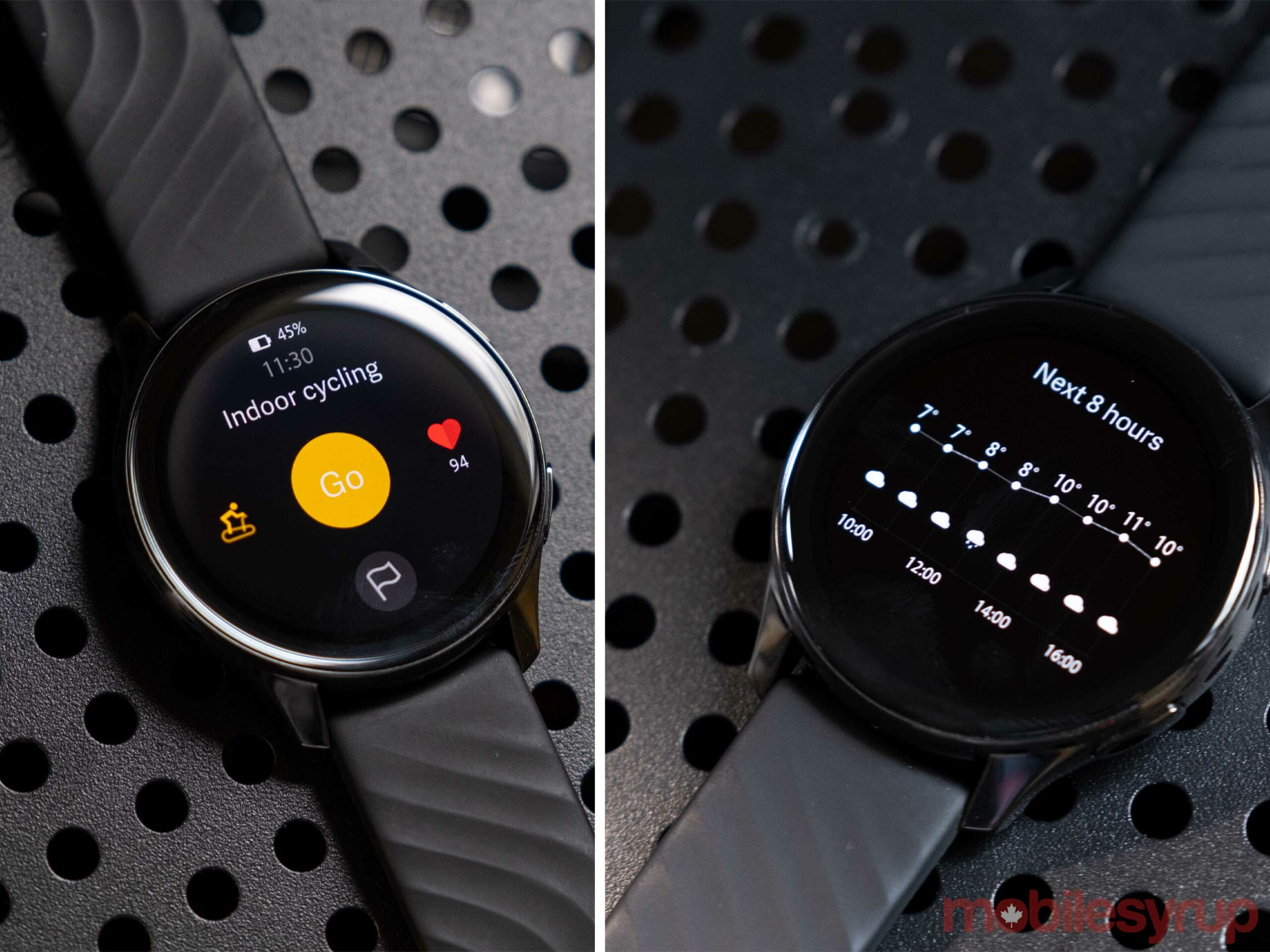 The single most impressive thing about the OnePlus Watch is its multi-week long battery life. I’ve been using mine for around a week and it’s still running with 50 percent left.

Beyond that, it features a pretty premium-feeling design that’s subtle and more appealing to me than a Fitbit or a Garmin watch. It looks a lot like a Samsung Galaxy Watch and various other Wear OS-powered wearables. In the end, it’s a pretty unassuming black circle, but a nice feeling one, thankfully.

The screen is bright and punchy, but there’s no always-on display, and I found that the raise-to-wake function didn’t work as well as with some other smartwatches. The simple two-button setup works well. One button opens the app drawer and acts as a home button, while the other can be mapped to open one of the watch’s built-in apps. 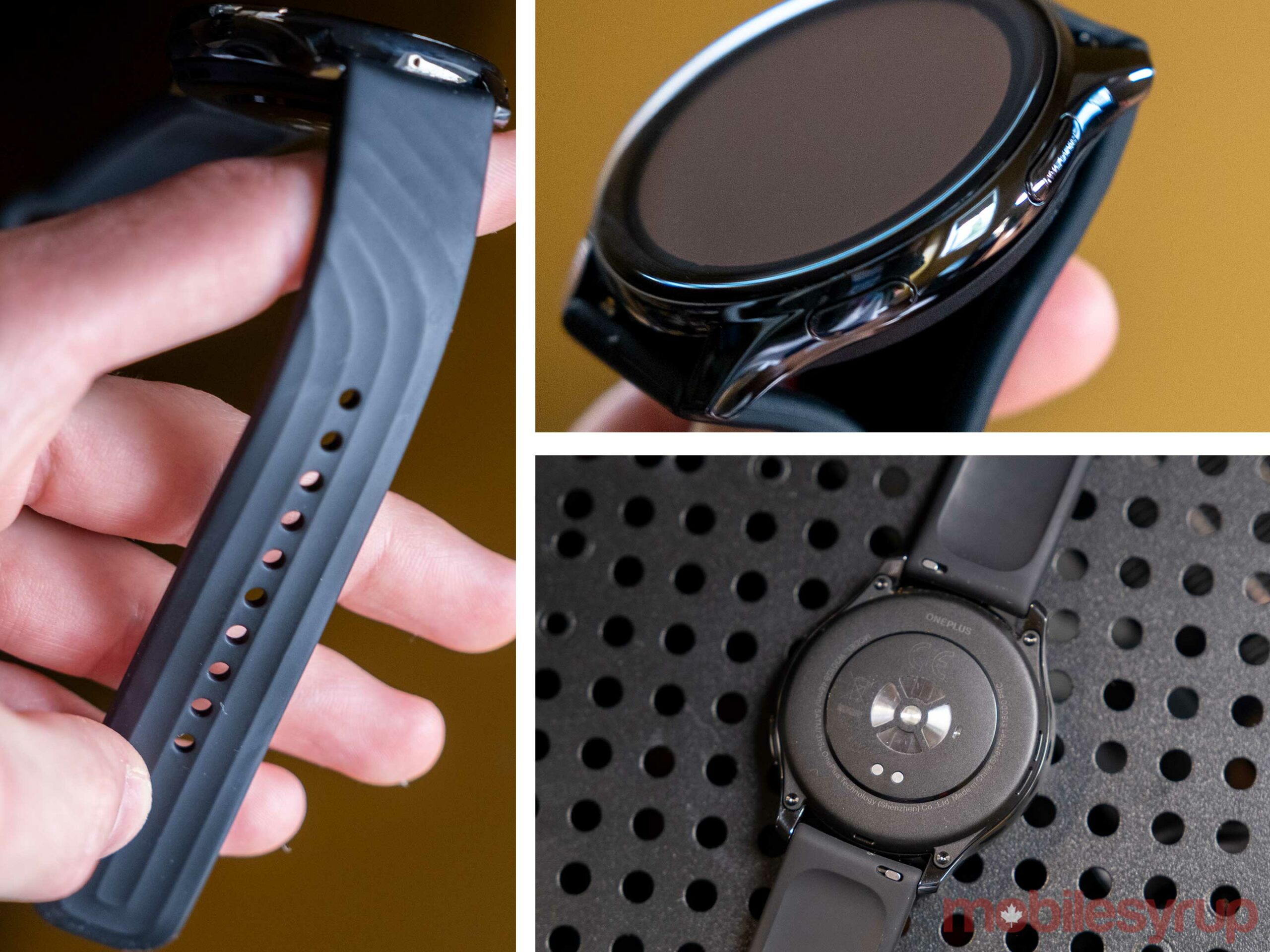 Speaking of the apps, there are a few here worth mentioning. They’re all reasonably bare-bones, but they work well enough. You can get the weather, control music playback, track a workout and more. That said, there’s no third-party app support, so using the OnePlus Watch to log bike rides with apps like Strava isn’t possible.

On the health side of things, you can track your blood oxygen level, heart rate, stress and sleep. This works well, but once again, these are more fitness-focused features, so unless you’re really into tracking your exercise, they will likely go unused.

I’m also a fan of some of the included watch faces. For example, there’s a simple gradient that looks great and other more functional faces that you can add preset app shortcuts to. Still, as I alluded to before, there aren’t many apps I open on a regular basis. 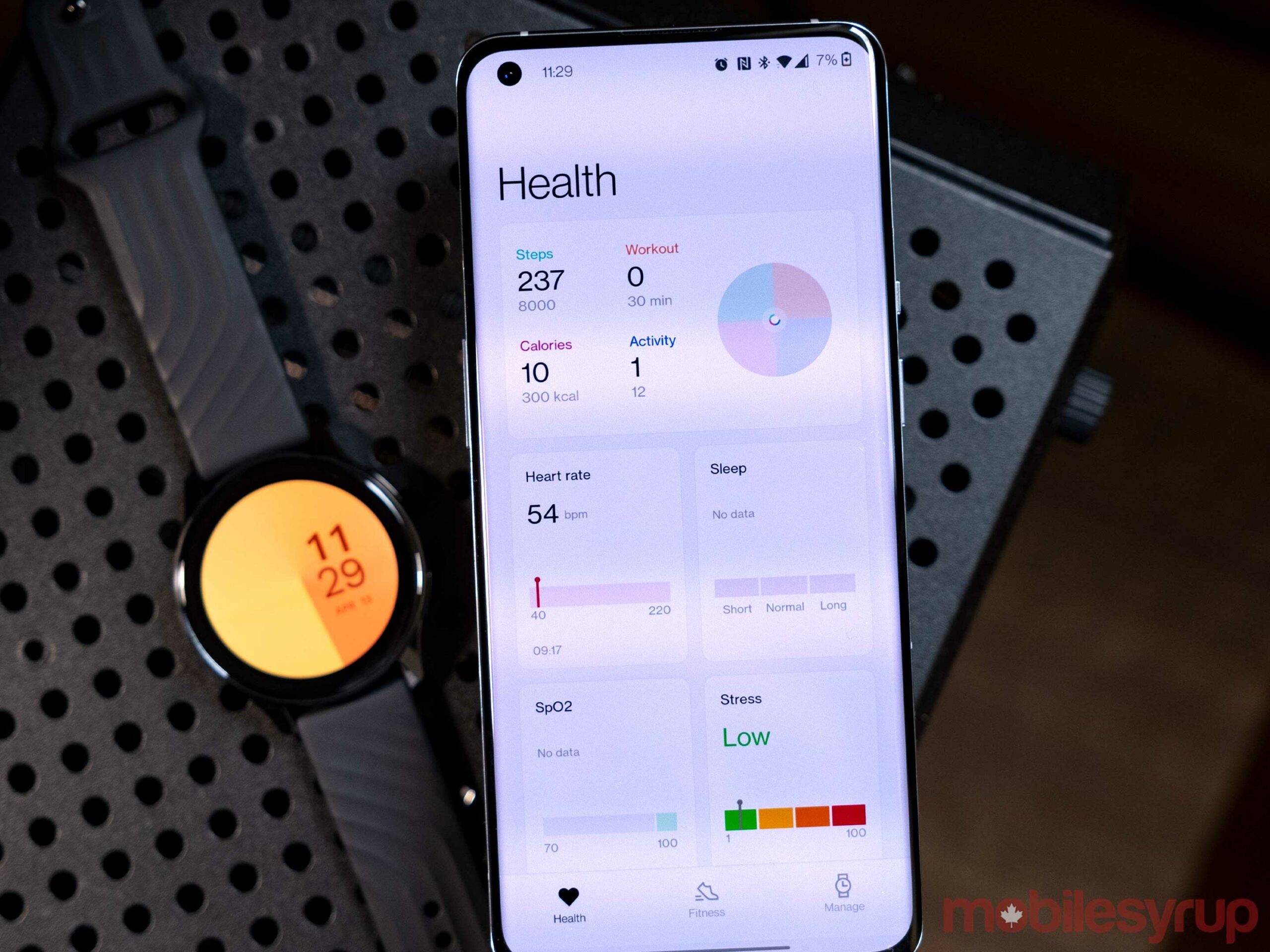 There’s nothing overtly terrible about the OnePlus Watch, but that changes when you stack it up against its competitors.

First off, it makes you download the OnePlus Health app, which is often confusing and frustrating. To be fair, Apple and Google’s Health and Fit apps aren’t that intuitive either, but the UI of OnePlus’ app is so simple that it’s difficult to tell what touch targets to tap. It’s also very buggy and even after the official release, the app doesn’t interact properly with the Watch.

“I took it on a few bike rides, and while the wearable recorded my activity, only some of the metrics were correct.”

Beyond that, the app also doesn’t accurately track any of my sleep data. It does tell me when I go to bed and when I wake up — it even does a decent job tracking naps. However, the app data only really indicates when you go to bed and wake up, and doesn’t delve into other details you’d get with a Fitbit or an Apple Watch. Frustratingly, the watch resets all stored sleep data at 8pm every day, which means if it doesn’t sync for some reason, you lose everything. 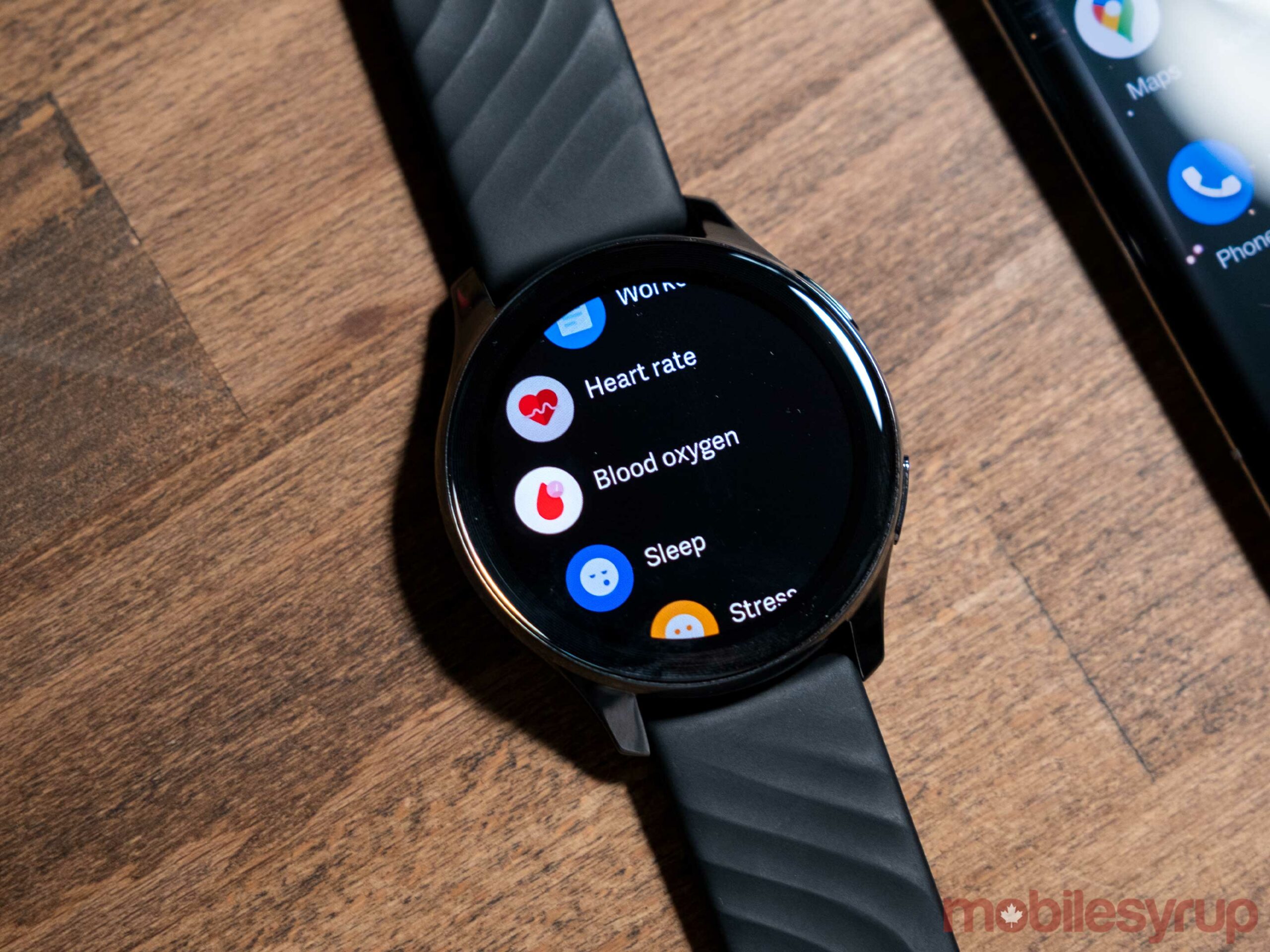 The OnePlus Watch’s notifications seem somewhat inconsistent and only come in fast when I’m near my phone. Then, once you access them, you can select from four pre-set messages to reply with. On top of that, OnePlus’ official renders show off a better-looking notification experience than what the actual watch features. I also found that notifications from Slack and some other apps don’t come to the Watch for some reason.

When it comes to working out, the OnePlus Health app is, again, really inconsistent. I took it on a few bike rides, and while the wearable recorded my activity, only some of the metrics were correct. For example, I went on a 5.5km bike ride the other day and the OnePlus Watch only recorded about 60m of the ride despite tracking my heart rate for the entire 5.5km. Then, at the end of my ride, the app said that it could only save bike rides that are over 500m. This happened every time I tried to bike while wearing it.

Other tracking features like yoga worked slightly better, but since there’s no always-on display function, it’s not possible to easily check your progress without physically touching the watch. There is a raise to wake, but I found it worked so inconsistently that I stopped relying on it. Also, during my exercise, the heartbeat metric on the OnePlus Watch was 10-20 bpm lower than the Apple Watch. 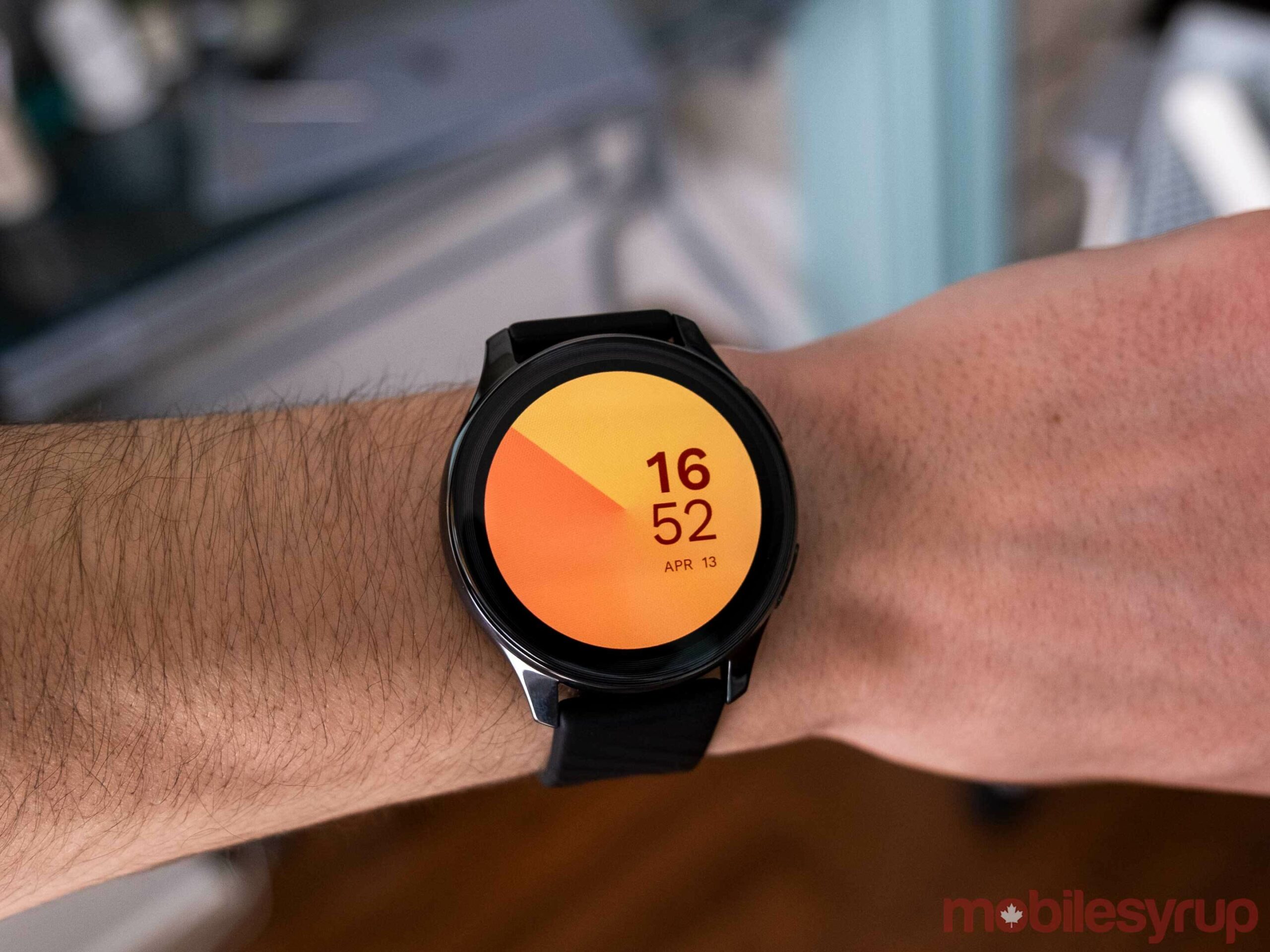 The little watch that couldn’t

With the OnePlus Watch, the company has built a decent beta wearable and I think with a few more cycles of refinement, it could have an excellent activity tracker on its hands.

That said, this first model feels like a concept device in some ways, so it’s something I’d recommend to early adopters and tech enthusiasts over people looking for an accurate fitness tracker or smartwatch.

It’s exciting to have OnePlus competing in the smartwatch space, but if it’s going to try again next year, the company still has a lot of work to do.

"With the OnePlus Watch, the company has built a decent beta wearable and I think with a few more cycles of refinement, it could have an excellent activity tracker on their hands."