Galaxy Watch Active Review: Very capable, even for the inactive

When it comes to technology people often seek out the latest and most innovative devices.

For manufacturers, changes to products often come in the form of interesting design shifts, such as Apple launching the ‘notched’ iPhone X, or modifications to the software experience, like Samsung and its generally great One UI.

Samsung’s latest smartwatch, unfortunately, isn’t a leap forward and instead feels more like a side step for the South Korean manufacturer. As a result, this ‘Active’ version of the South Korean company’s flagship Galaxy Watch features a new but still very familiar design.

But first, here’s a brief lesson on Samsung’s history with smartwatches.

In 2017, Samsung launched the Gear Sport, a slim alternative to the Gear S3 series that felt like it was aimed at customers with a more active lifestyle. When I reviewed the watch, I called it a “capable smartwatch, even for non-athletes.” In a way, the Galaxy Watch Active is the spiritual successor to the Gear Sport.

Back in 2018, Samsung rebranded its Gear moniker with ‘Galaxy’ so it matched with the company’s other products. The first device to feature this name change was the Galaxy Watch.

While 2019’s Galaxy Watch Active is not the successor to 2018’s variant of the smartwatch, it’s a lightweight take on the design that is still a capable smartwatch for all types of users. 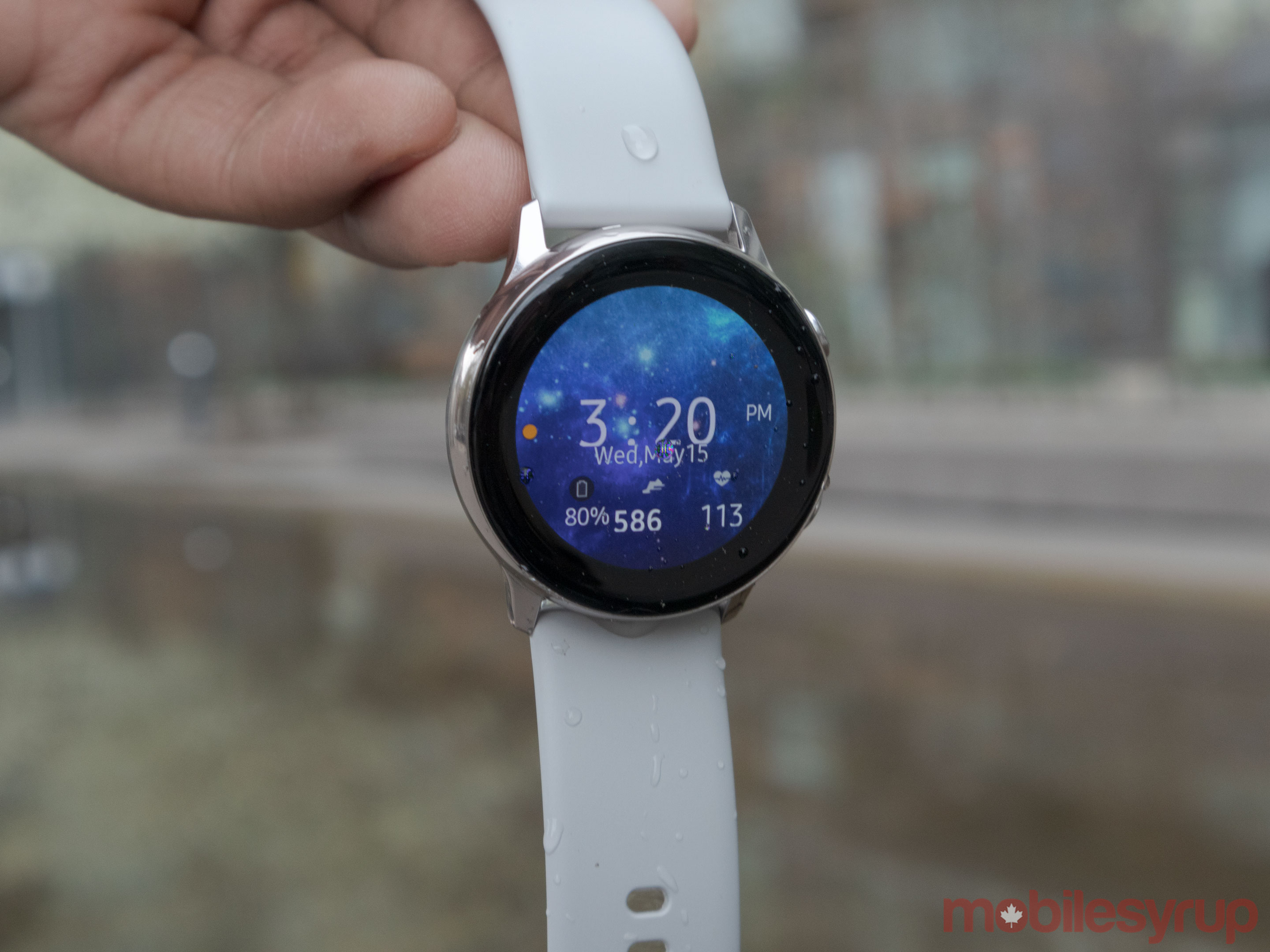 In 2018, I opted to review the 46mm Galaxy Watch because it featured a larger, longer-lasting battery. However, I remember the smaller 42mm version felt far more comfortable on my wrist. Now, the Galaxy Watch Active brings an even lighter and slimmer experience to Samsung’s smartwatch line when compared to even the 42mm Galaxy Watch.

However, my experience with the Galaxy Watch Active was different. Because it was so slim and so light, I barely noticed I was wearing it, even at work where I spend about 90 percent of the day typing at my desk.

While the Galaxy Watch Active is lighter and smaller when compared to Gear Sport and Galaxy Watch, it comes with another change that sets it apart from the Gear family — it lacks a rotating bezel.

I thought Samsung would have removed the navigation bezel when it switched from Gear to Galaxy, but the Galaxy Watch still featured it. With the Watch Active dropping the bezel, it’s unclear if Samsung will bring it back.

I don’t necessarily miss the gear bezel, but it was fun to use. That said, if removing the rotating bezel allows the smartwatch to feel lighter and slimmer, then I’m all about getting rid of it. It’s worth noting that it was also easier to see what you’re doing without having your fingers obstructing the watch’s small screen.

I’m fond of the change, and it makes the smartwatch look far more modern. This is the first Samsung smartwatch — not counting the company’s smart bands — since the Samsung Gear S that lacks the bezel. 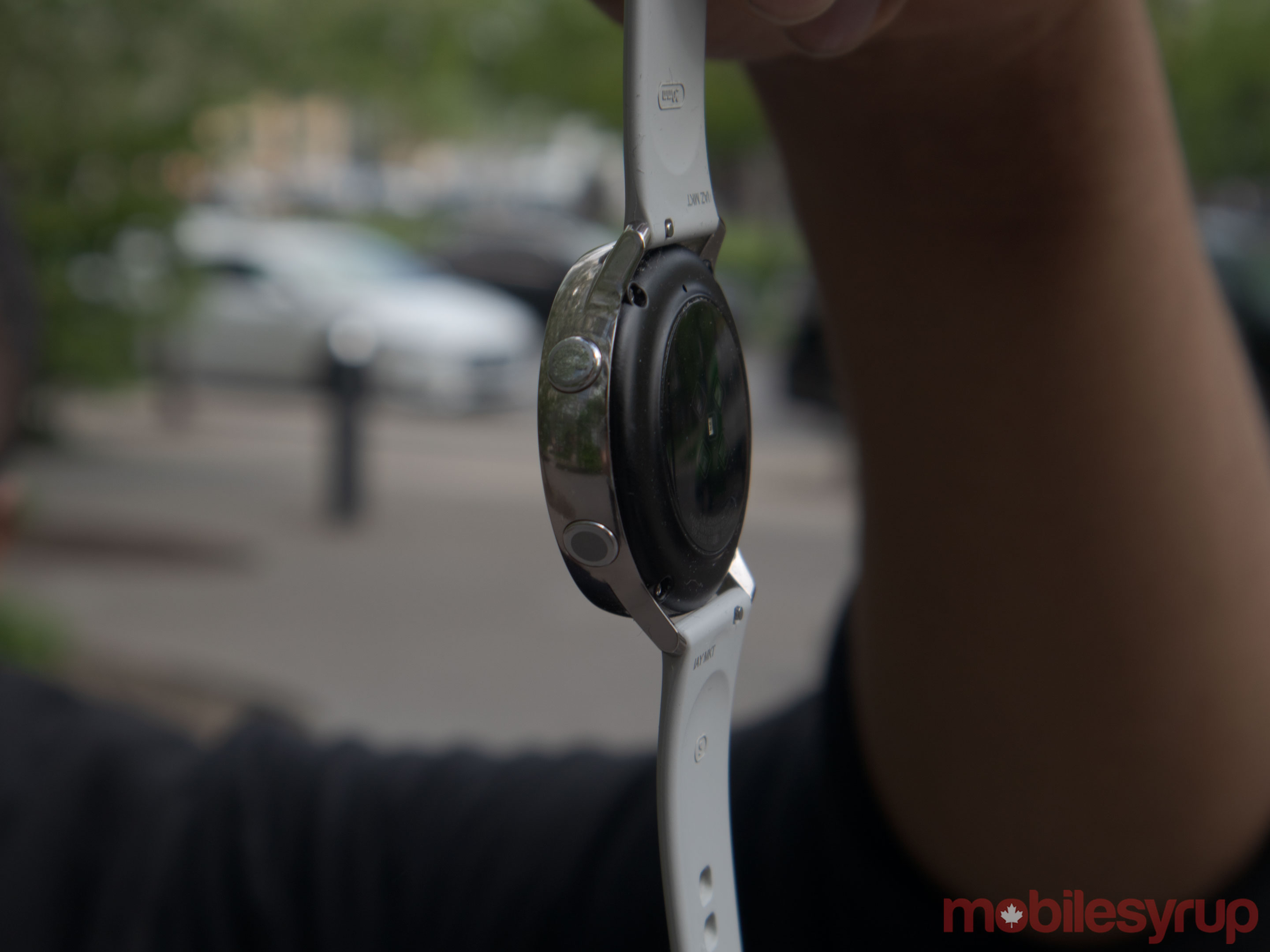 The Galaxy Watch Active features a 1.1-inch circular display that is smaller than the screen included in both the Gear Sport that uses a 1.2-inch panel and the 42mm Galaxy Watch, which sports a 1.3-inch screen.

At times I wished the wearable featured a bigger display. Text wasn’t difficult to read, but my experience with 2018’s Galaxy Watch was better because of the smartwatch’s size. That said, the Watch Active’s user interface does make content clear thanks to its bolded text and black background.

The Active sports a Super AMOLED panel with a 360 x 360-pixel resolution.

My most significant issue with the smartwatch and its screen is the bezel. Unlike the Apple Watch Series 4, which features a curved display with minimized bezels, the Watch Active includes a circular, flat screen that features considerably larger edges.

What some might find to be a more significant issue with the Watch Active is that it lacks a built-in speaker. So while the smartwatch features a mic that enables users to speak to Bixby, you can’t use it as a wristwatch telephone like with the Galaxy Watch. In fact, when you start a phone call on the Active, the watch will direct the user to pull out their handset.

Not the best or worst 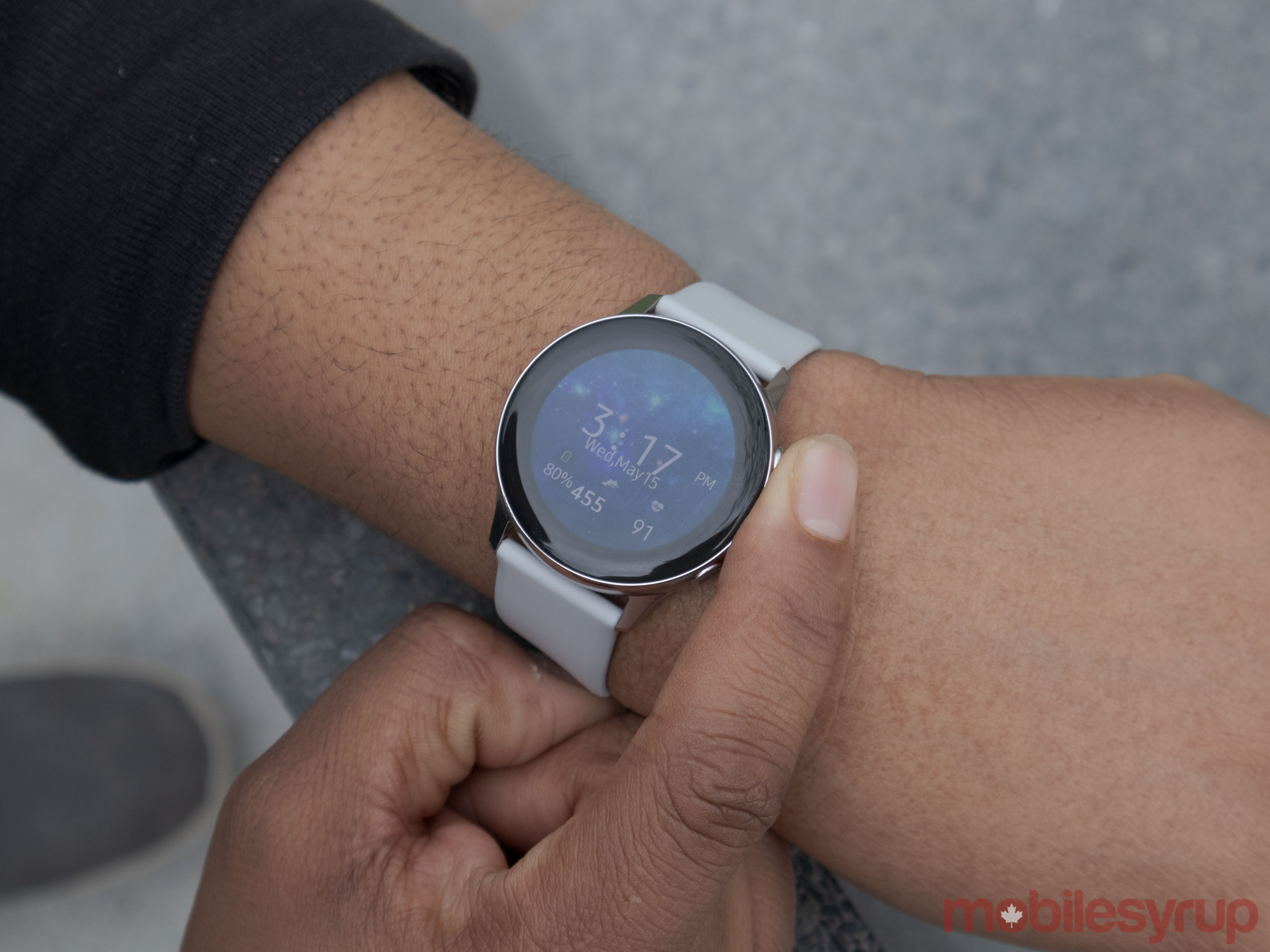 The Watch Active features a 230mAh battery that I found consistently lasted around 30 hours on a single charge. Battery Life isn’t as good as the 46mm Galaxy Watch, which typically got me through three nights and would die at some point during the fourth day.

The Active’s battery life was similar to the Apple Watch Series 4, which lasted MobileSyrup managing editor Patrick O’Rouke a day and a half with “moderate usage.”

Further, the Galaxy Watch Active charges wirelessly. That said, it’s important to note that it doesn’t place nice with the Qi wireless charging standard. Similar to most smartwatches, Samsung packed in its own charger for the wearable, which is good since it doesn’t seem to be compatible with any third-party wireless charging pads I tested out.

I’ve tried charging the watch on various wireless charging pads and it just didn’t work. However, it’s unclear if this is new as I never tried charging Samsung’s previous smartwatches on a charger that didn’t come with the device. 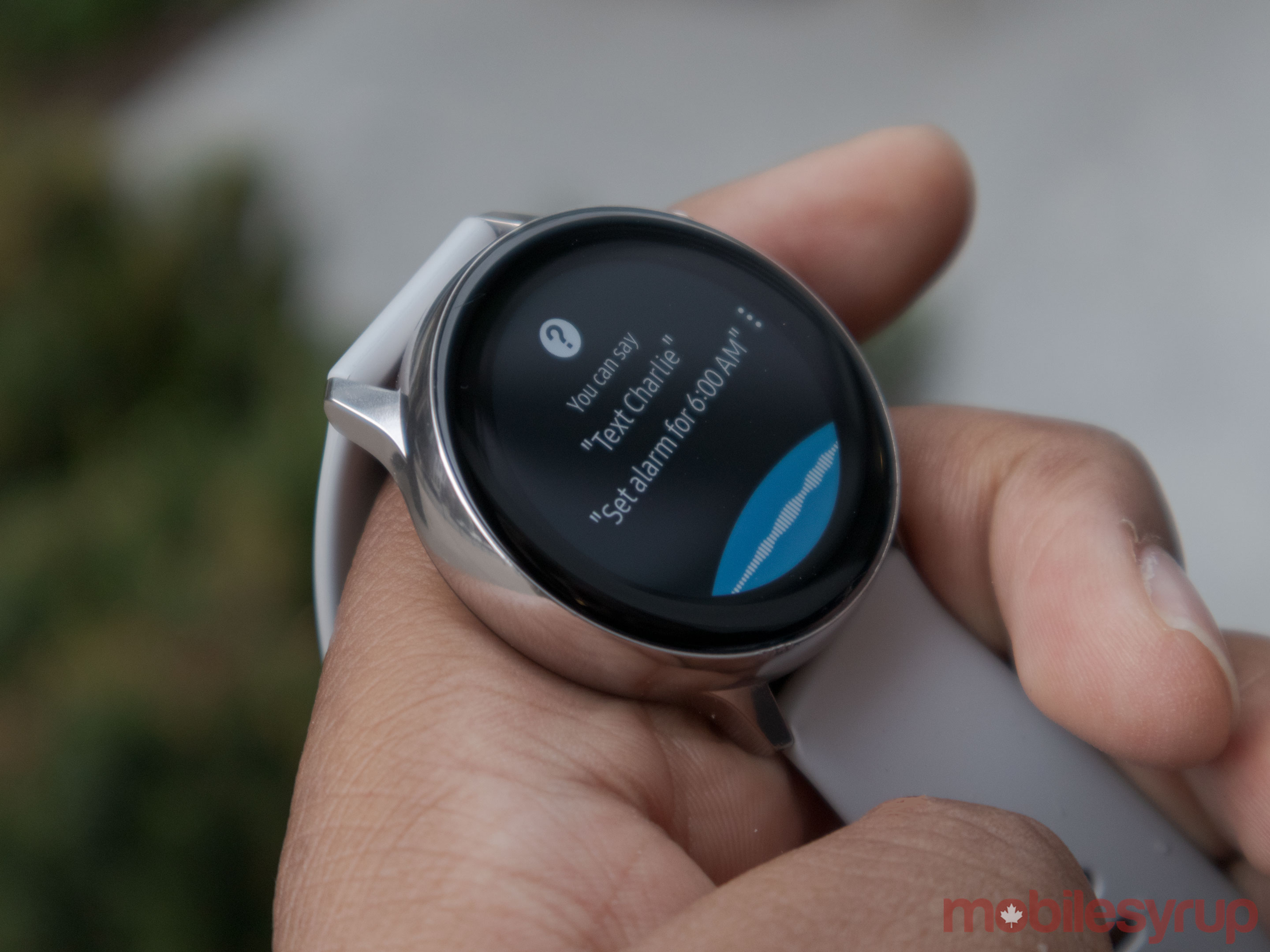 The Galaxy Watch Active is a snappy little watch even though it only sports 768MB of RAM and Samsung’s Exynos 9110 processor. You’re typically not doing anything intensive with a smartwatch, so the Active has no issue keeping pace with its user.

Samsung’s Tizen operating system (OS) hasn’t changed much from its previous version. It’s based on Linux and contains proprietary components owned by Samsung. The South Korean company uses Tizen on its smartwatches, smart appliances and even some smartphones.

Though Tizen OS doesn’t feature as many apps as Wear OS and watchOS it’s still a competent operating system.

Bixby works fine, with the artificial intelligence being able to perform actions promptly when you speak to it. Users can ask questions like “what is the time in Timbuktu?” You can also request that Bixby call your mom. If you start a call it’ll go straight to the handset.

‘Still workin’ on my fitness’ 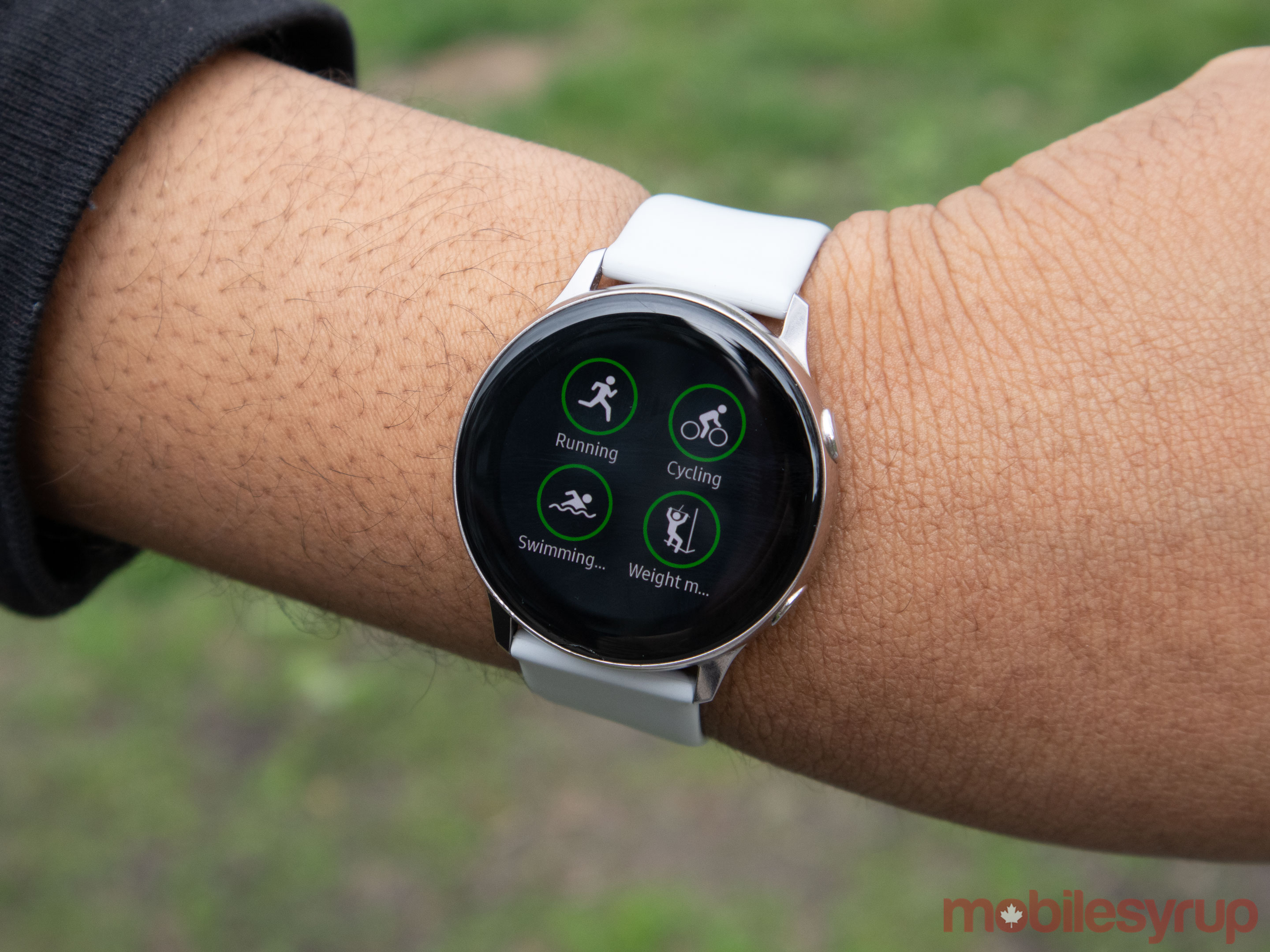 The Galaxy Watch Active is capable of monitoring the wearer’s activity while they exercise.

Similar to the Galaxy Watch, the wearable automatically recognizes when you’re running, using an elliptical, rowing and more.

You can also tell the watch that you’re doing other exercises, such as weight training, and the wearable can time how long you’re doing them for and monitor your pulse.

This feature seems pretty accurate, but similar to the Galaxy Watch, it does take a moment to realize you started an exercise with the automatic detection. 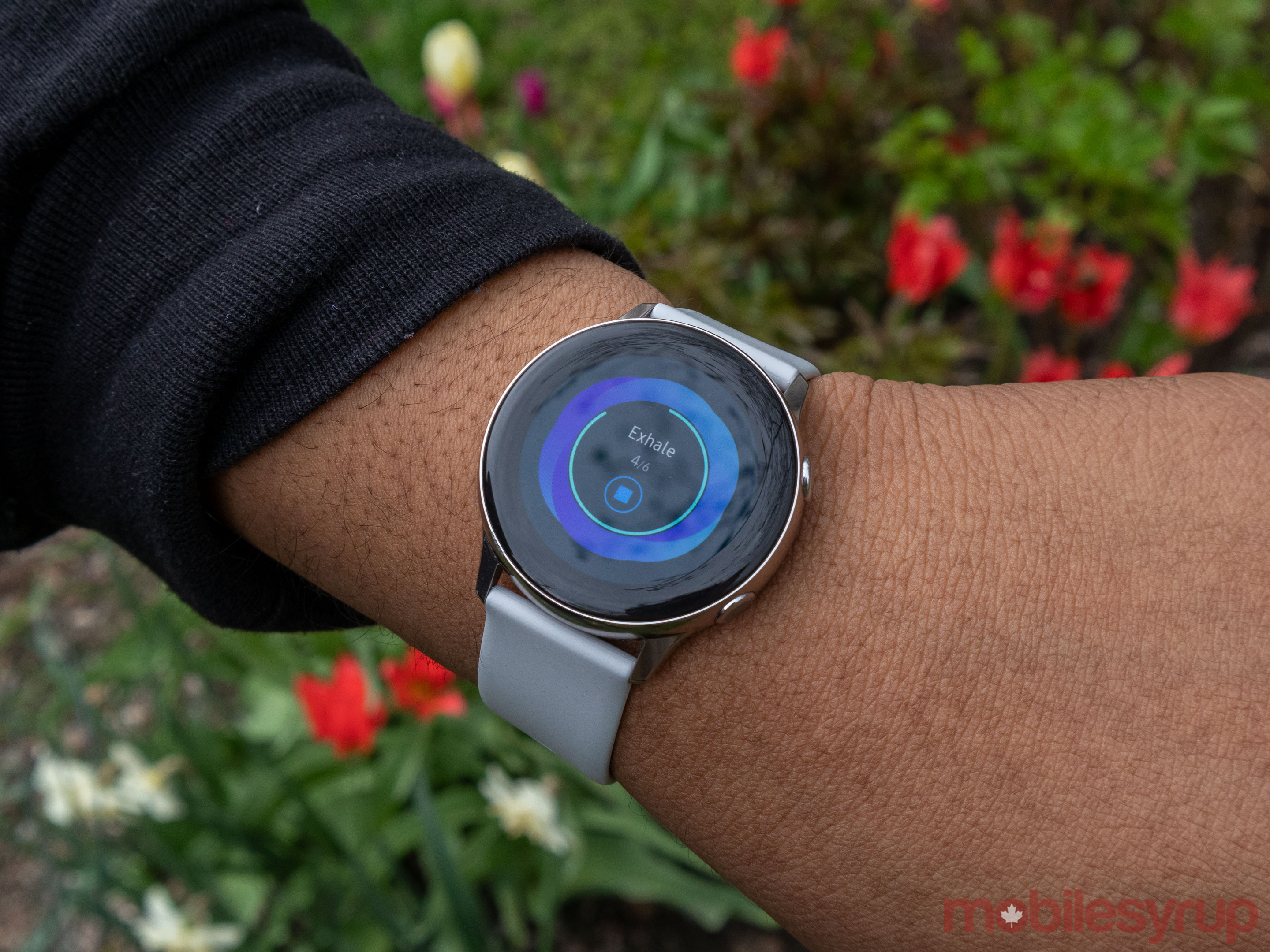 The Galaxy Watch Active can also monitor the user’s sleep and stress.

It’s impressive how well it works when it comes to sleep tracking. The wearable tracked my entire sleep, literally from the moment I fell asleep until the next morning when my alarm woke me up. To be clear. The Galaxy Watch was also able to do this as well.

The Active can also monitor and tell if a user is stressed.  Whenever I use the feature, it always says that I’m stressed, though I typically never actually feel stressed. The wearables takes a baseline of the user’s heart rate and uses it to compare with future stress tests, to figure out if the user is stressed.

In Canada, the smartwatch is available in ‘Silver,’ ‘Black,’ ‘Sea Green’ and ‘Rose Gold. And it costs $299.99 CAD from the Samsung Experience Store. You can also grab it from Best Buy and the Source

Samsung's Galaxy Active isn't as big as the Galaxy Watch, and as a result, it's slimmer and lightweight body might be what you're looking for. While I typically don't like having a wearable on my wrist, I found the 25g smartwatch comfortable, and I would sometimes not even notice the device on my wrist. While I personally don't like the shorter battery life, in comparison to the Galaxy Watch, it's definitely not that significant of a problem.

It would have been nice if Samsung added a speaker to the watch this time around, though speaking to your smartwatch like a Power Ranger can feel awkward.

The Galaxy Watch is a worthy purchase for anyone looking for a lightweight smartwatch that isn't interested in the Apple Watch.

Similar to the Gear Sport, the Active is a capable watch designed for everybody, regardless of how 'active' they are.