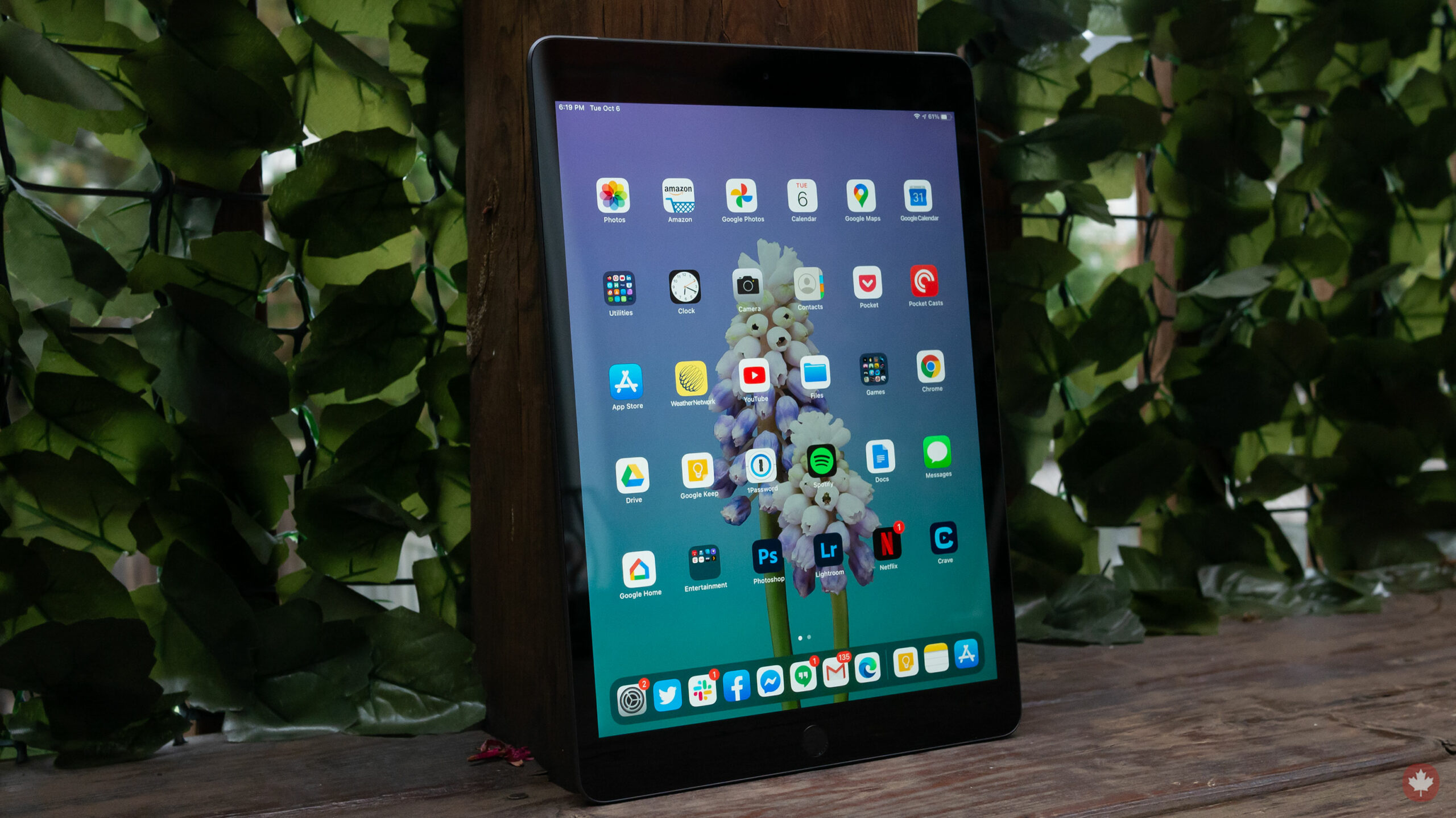 There’s nothing inherently wrong with Apple’s iPad (2020) refresh, but it’s also not the least bit exciting. 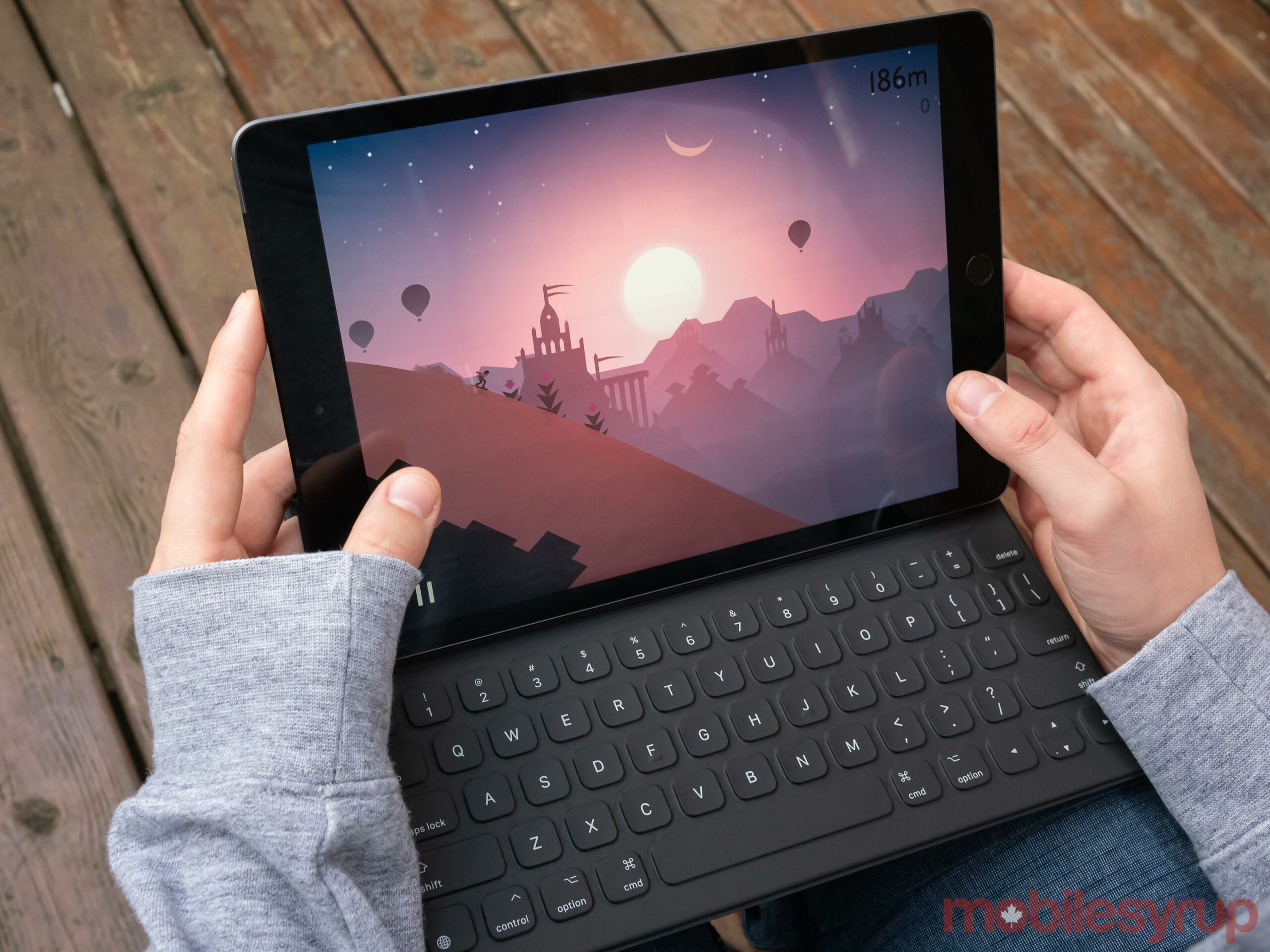 As you may have already guessed, this is a substantial power boost, amounting to the tablet being 40 percent faster than the 7th-generation iPad (more on this later).

But beyond the chip’s power bump, this is the same iPad Apple has released for years. It features identical sizeable bezels, a lightning port, a physical Touch ID button and first-generation Apple Pencil support.

For those looking for a tablet that they can use as a companion device, these shortcomings won’t be an issue. After all, the iPad (2020) is an entry-level device. Still, it would have been nice to see Apple at least refresh some aspects of the iPad’s design, especially given how great its upcoming iPad Air (2020) looks with its colourful design and squared-off edges.

The tablet for most people 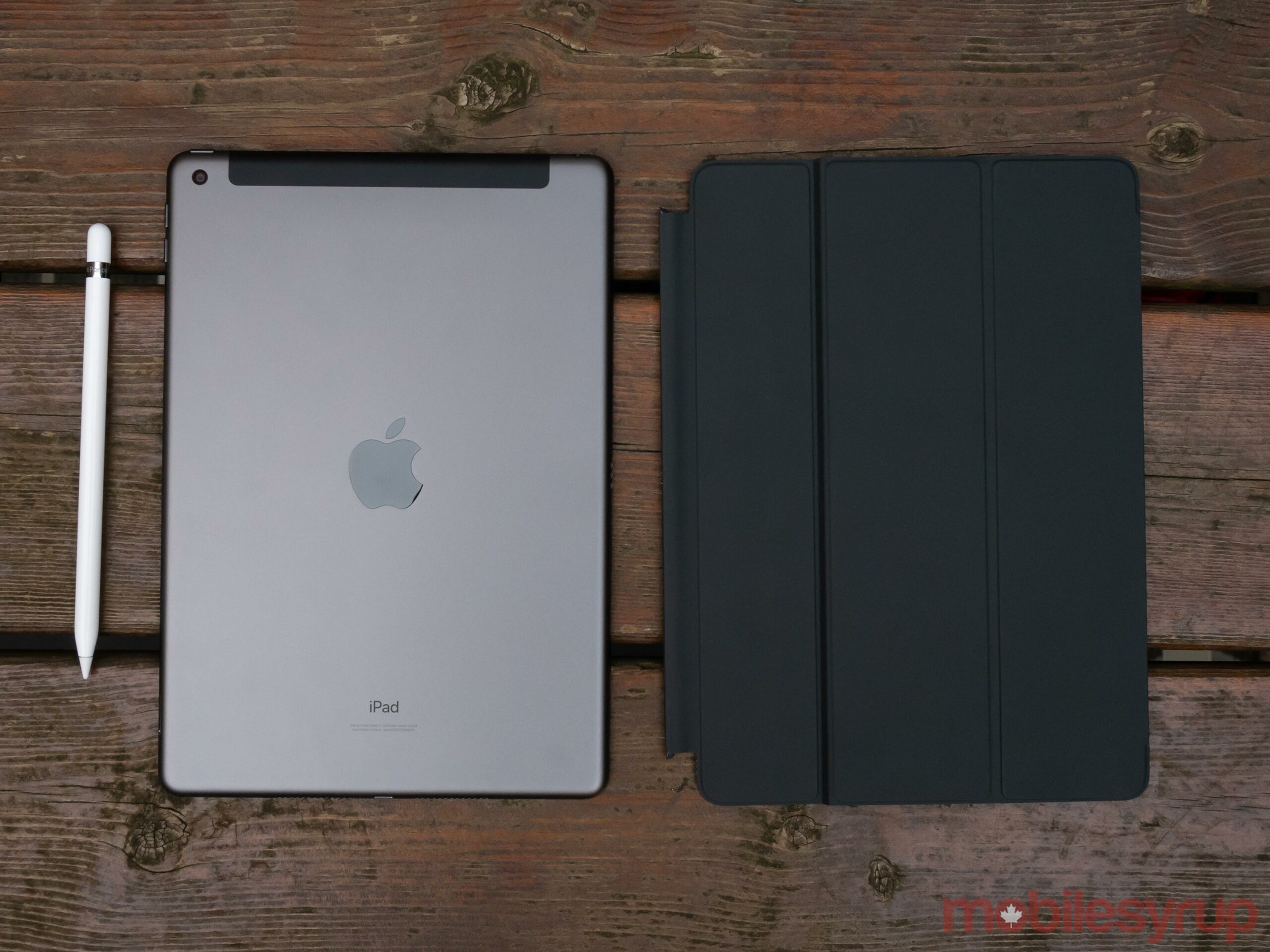 I view the iPad (2020) as the ideal tablet for most people. While some may have switched entirely over to using the iPad Pro as their main computer, many of us still use tablets — usually the iPad — as a companion device for chatting with friends, playing games, browsing the web and watching video content.

Despite its rapidly ageing look, the iPad is still perfect for these specific purposes, especially given its reasonable $429 starting price tag for the 32GB version. Its 10.2-inch display remains great for watching Netflix or Crave while lying in bed despite not featuring some of the iPad Pro’s high-end wide-colour screen with a laminated display. 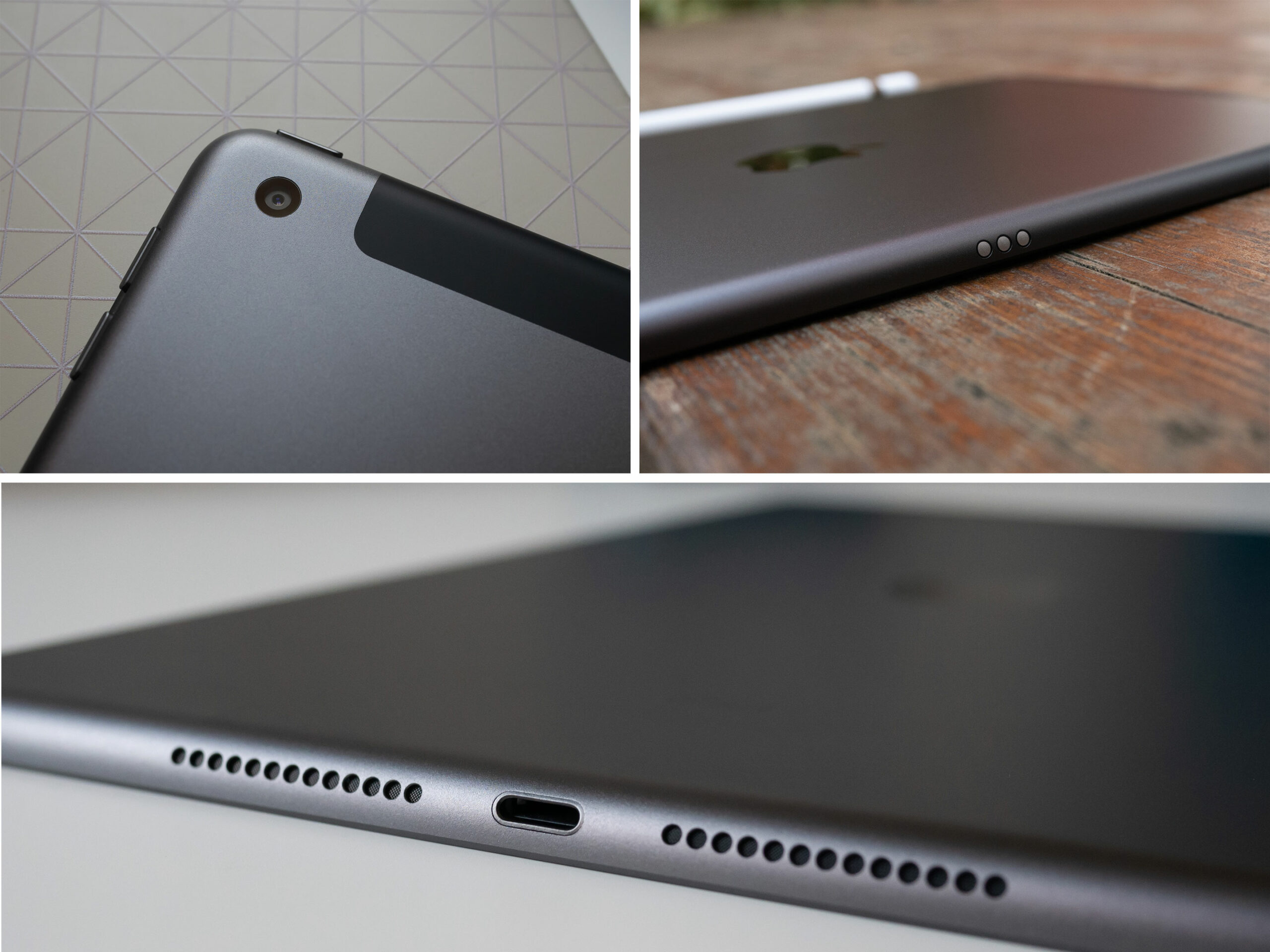 Of course, if you want to turn it into a productivity device, you easily could. The iPad (2020) is still compatible with Apple’s first-gen Pencil, which seems strange given you have to awkwardly charge it with the stylus sticking out of the tablet’s Lightning port. This is likely because the $129 2nd-gen Apple Pencil attaches via magnets at the top of the tablet and uses conductive charging. Adding support for the new Pencil would likely require a redesign of the iPad.

You can also attach Apple’s pricey $219 Smart Keyboard to the iPad (2020) thanks to its ‘Smart Connector.’ The Smart Keyboard isn’t great. Its keys feel overly mushy and it only allows you to set the iPad at one angle. There are tons of third-party keyboards out there that are similarly priced and in some cases, far better, like Logitech’s slightly cheaper Folio Touch that also features a built-in trackpad. 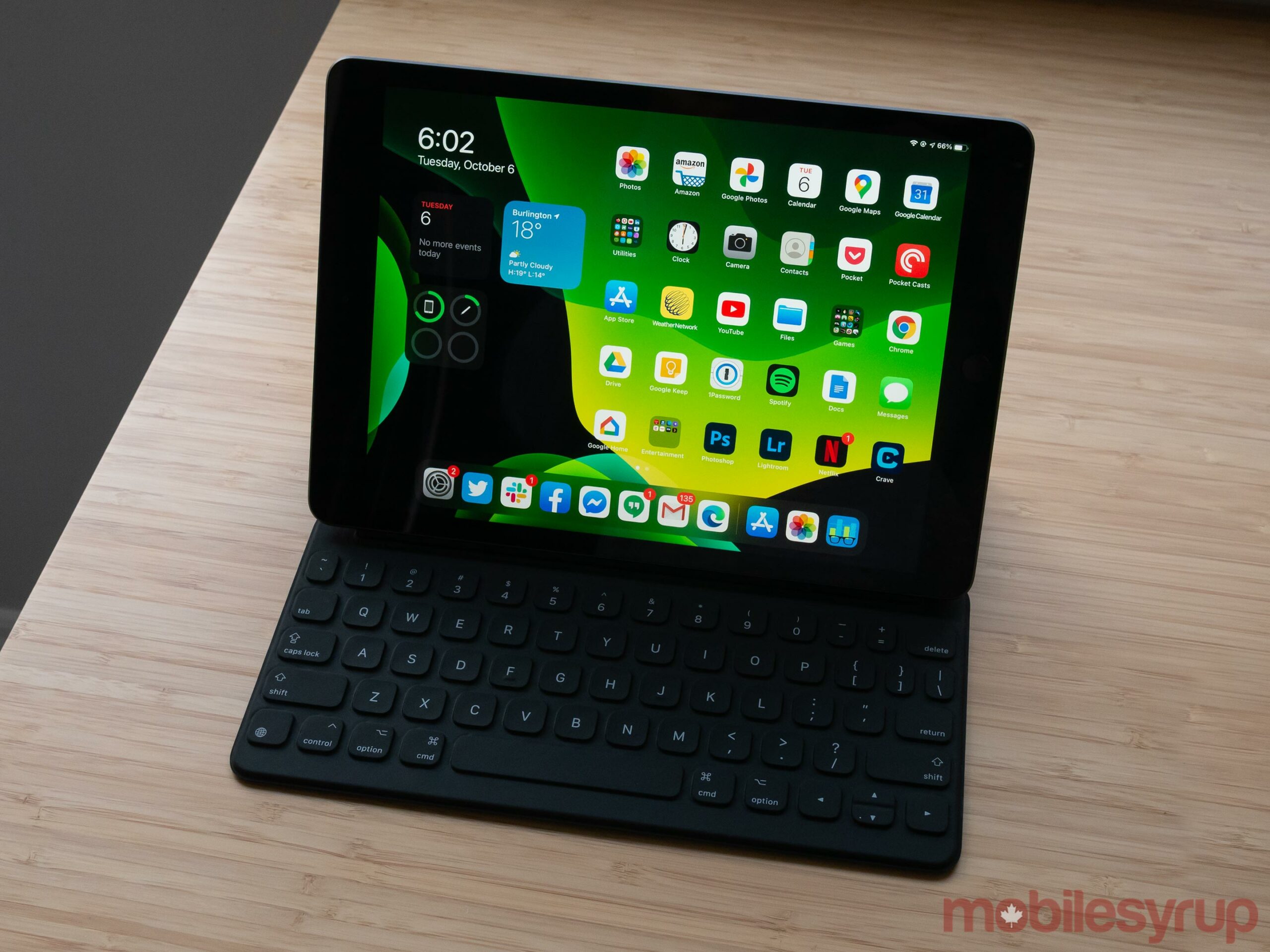 The new iPad feels slightly heavier than the 7th-gen version, though not noticeably so. It still features the same curved design as its predecessor, measures in at 25cm by 17cm and is a very reasonable 7.5mm thick. Despite its ageing aesthetic, the iPad (2020) still looks pretty small and sleek. However, putting it beside an iPad Pro or the upcoming iPad Air really shows its age.

Its selfie camera is a disappointment coming in at a dismal 1.2-megapixels, with the rear lens measuring in at 8-megapixels. It’s safe to say that you should not be planning to snap photos with the iPad (2020) as it takes pretty bad images unless the lighting conditions are ideal. Further, this isn’t a great tablet for video call meetings given the horizontal orientation of the camera coupled with its low quality. 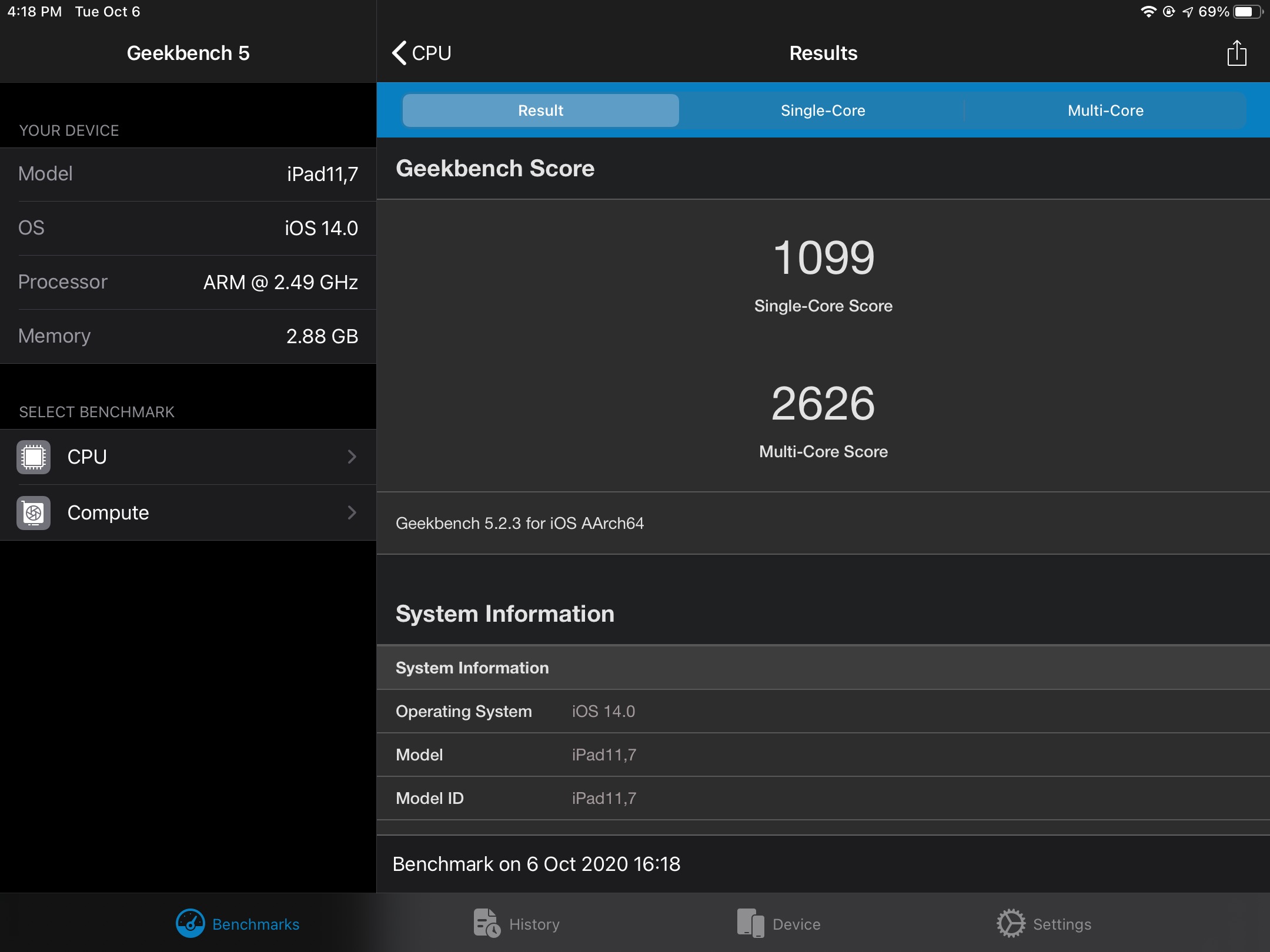 The only significant change this year is the inclusion of the A12 chip. Whether this upgrade is worth it to you will likely depend on which iPad you’re currently using and if it’s capable of still performing what you need it to do smoothly.

Though I don’t put much stock into benchmarks, the iPad (2020) hits 1,099 in single-core performance and 2,626 in multi-core performance with Geekbench. The tablet could handle anything I threw at it, including gaming, photo editing with Lightroom and browsing the web with one of iPadOS’ still unfortunately confusing multitasking modes. 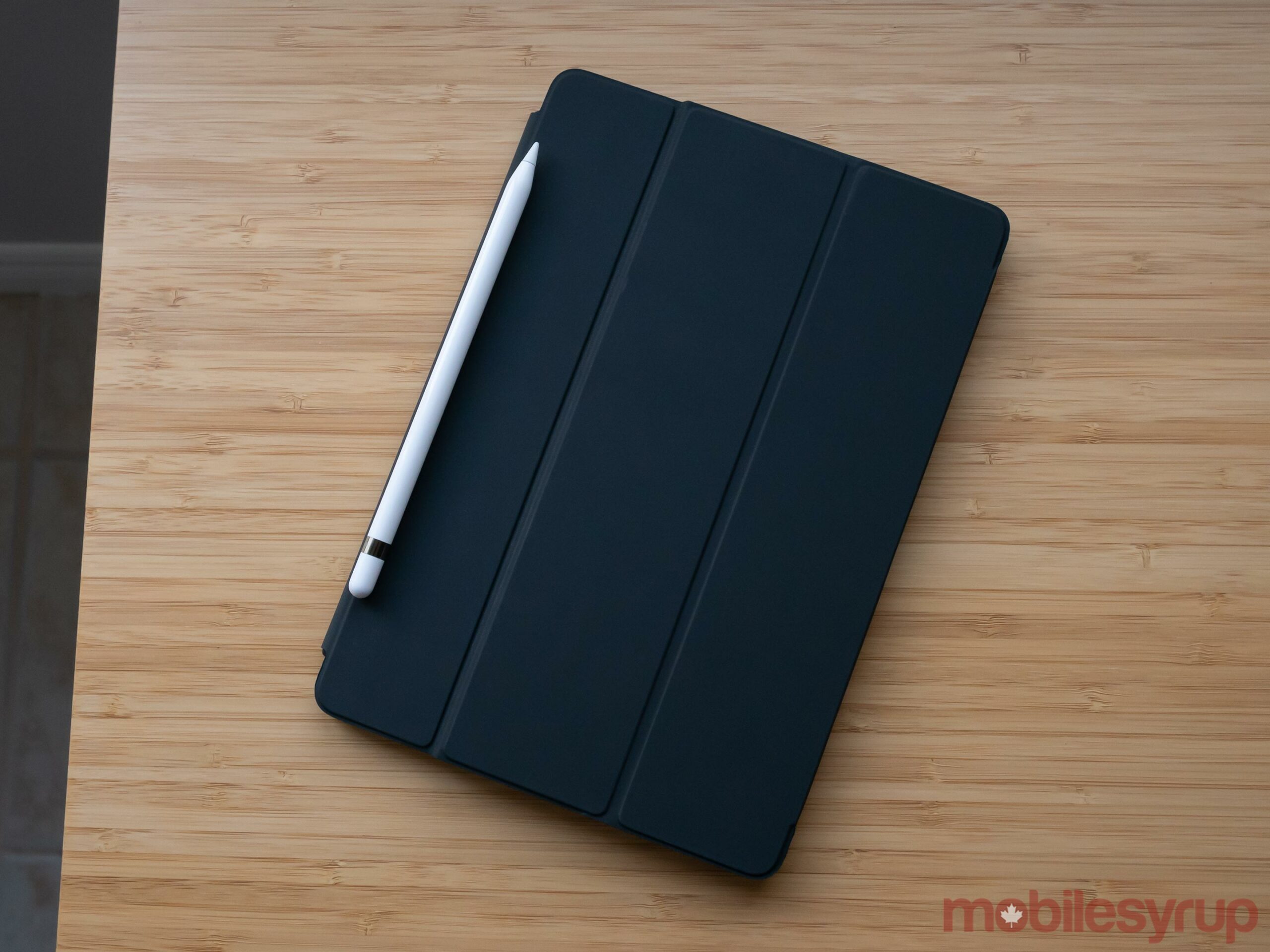 The tablet features passable sound that isn’t remarkable in any significant way since there’s little stereo separation between its speakers. This is in stark contrast to the absolutely stellar sound featured in the iPad Pro (2020), but again, this is Apple’s no-frills tablet, so this shortcoming is forgivable.

On the plus side, the iPad (2020) still comes with a pair of headphones and also includes a 3.5mm headphone jack, unlike its more expensive counterpart. While I’ve long since moved on to the sometimes-frustrating world of wireless earbuds, Apple keeping the traditional headphone jack on its entry-level tablet is a welcome move by the tech giant. 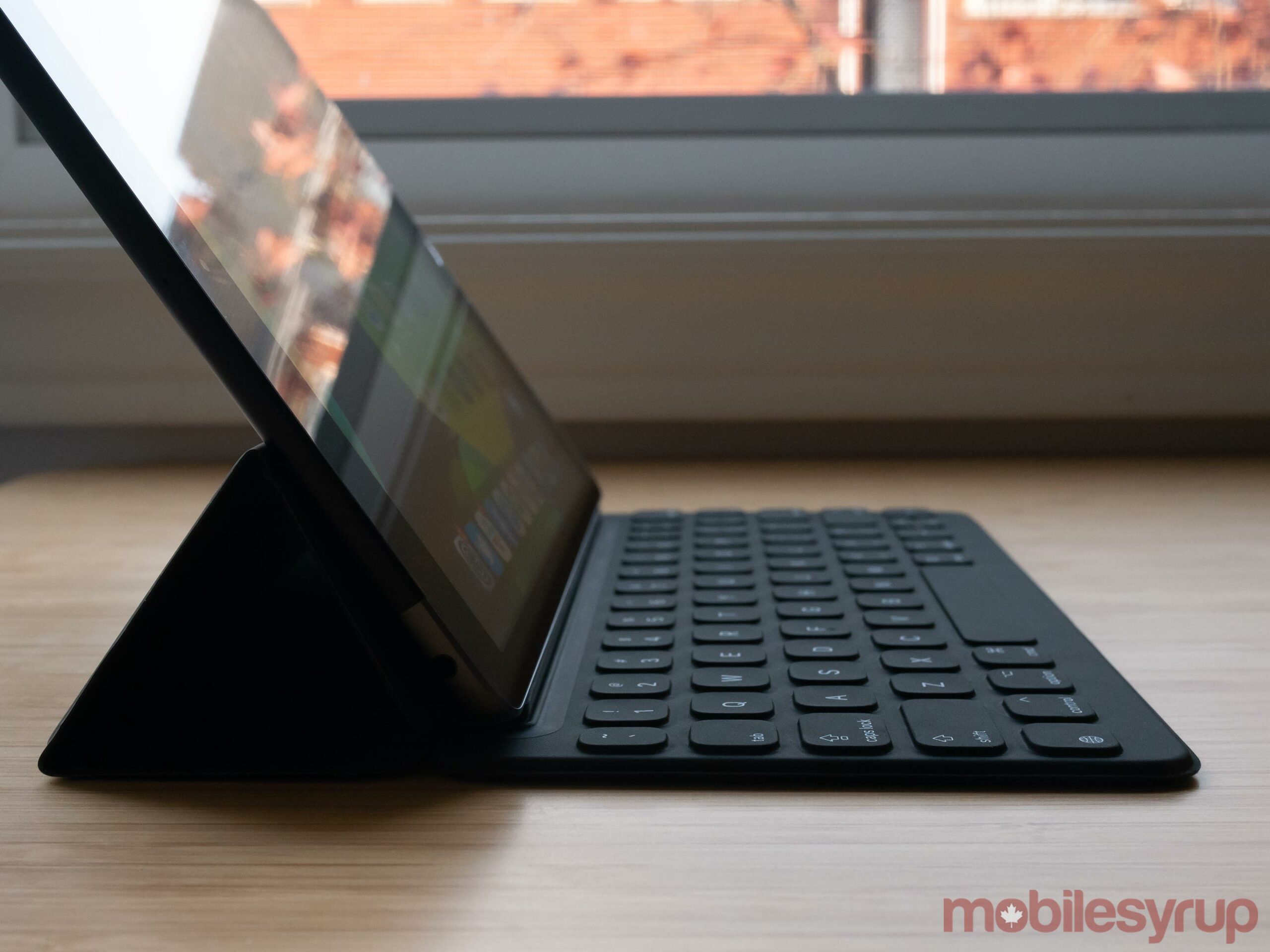 There’s also the same Lightning port we’ve seen in previous generations of the iPad. While it would have been great to see Apple switch the entire line over to USB-C, there’s still an ecosystem of Lightning accessories out there. However, there’s no denying that the iPad (2020) should have also made the jump to USB-C given how universal the port is now.

Though it’s unlikely many people will need significant storage on an entry-level iPad like this, the fact that the iPad (2020) features only 32GB of internal storage isn’t great, especially since even the iPhone SE (2020) starts at 64GB now.

It’s also worth noting that the iPad (2020) is compatible with iPadOS 14, the latest version of Apple’s tablet operating system that brings with it a host of new features.

‘Scribble,’ which allows you to write with the Apple Pencil directly into any text field, works great, but isn’t likely a feature many people will end up using since typing is so much faster. Still, it’s cool Apple carried this functionality down to the entry-level iPad and first-gen Apple Pencil. 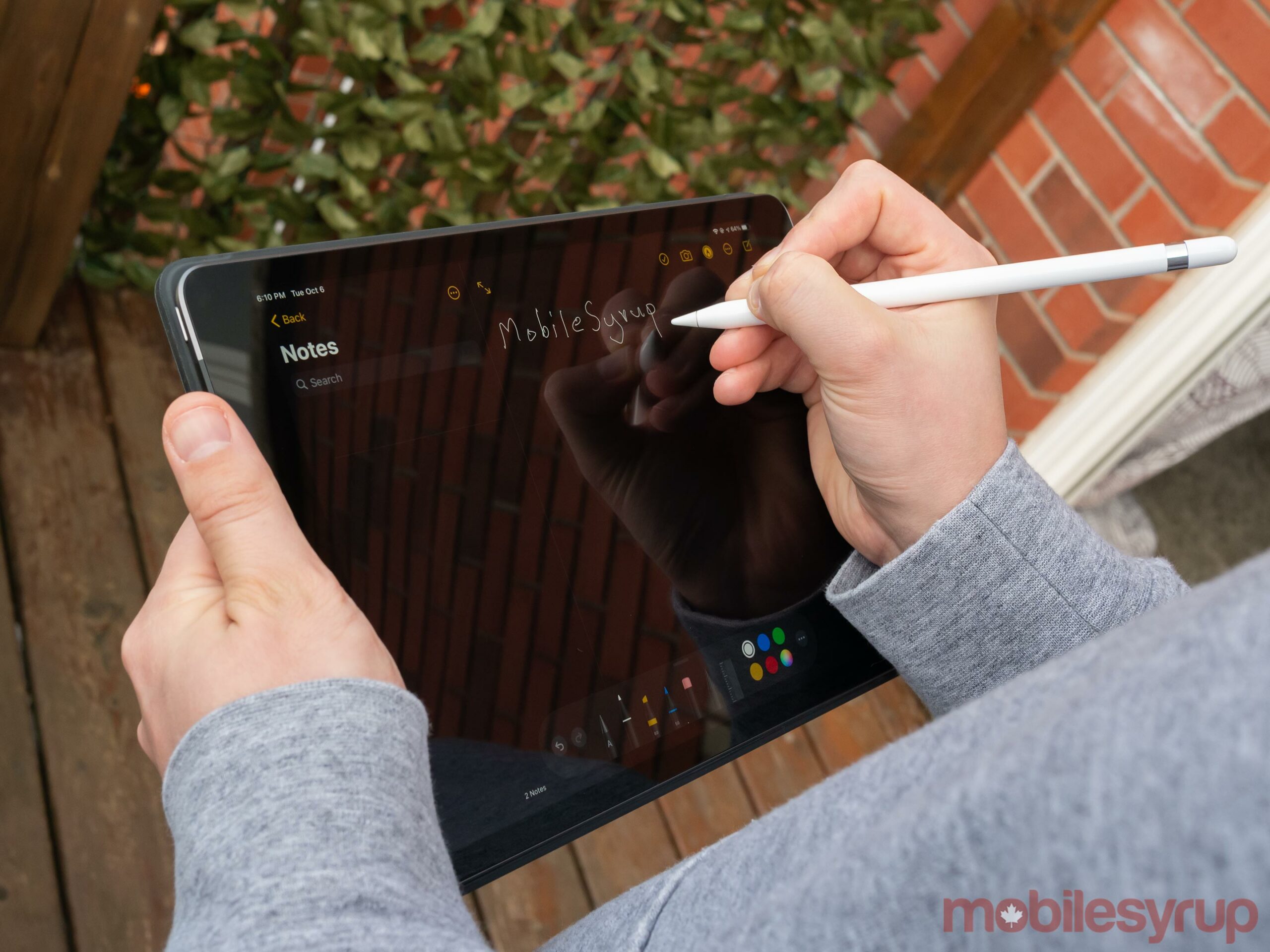 Widgets are also here, though just like with every other version of the iPad, can’t be moved around and placed wherever you want like with iOS. This limits their usefulness significantly.

There are other subtle improvements like ‘Smart Selection’ with the Apple Pencil or your finger, shape recognition when drawing objects, Siri being less intrusive and more. Overall, iPadOS 14 is a decent, but not very exciting update to Apple’s tablet operating system. 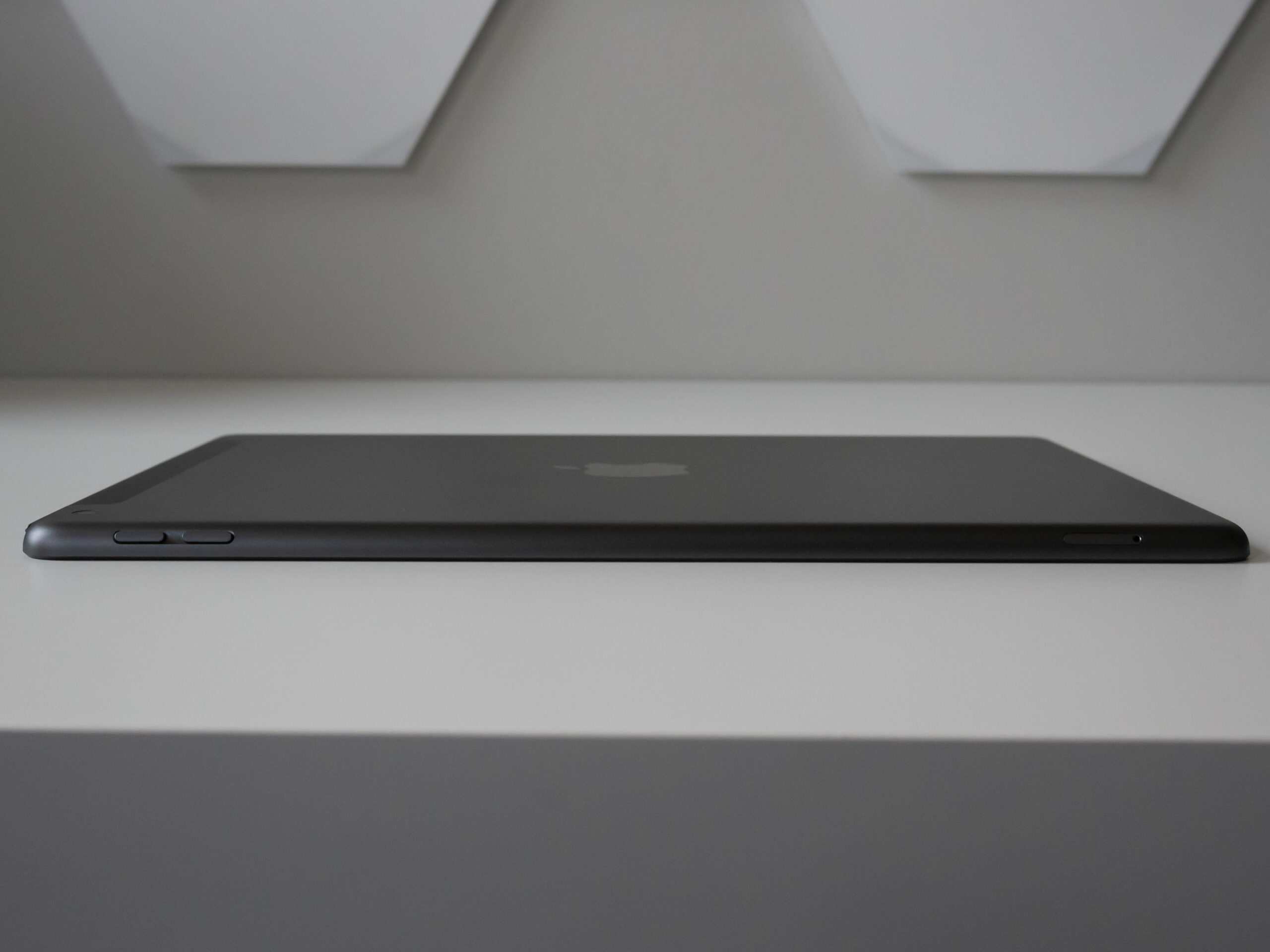 Dreaming of the iPad Air

The iPad (2020) is still a solid tablet, it's just not exciting in any way, especially in the face of the soon to launch but far more expensive iPad Air (2020) that brings all of the pricey iPad Pro (2020)'s best features down to a slightly lower cost.

I would have liked to see more of an update this year, particularly when it comes to design. For example, as each year passes, the iPad's bezels are beginning to look increasingly large.

Still, as a companion device designed to be "the good screen" you hang out on after work, Apple's iPad (2020) is difficult to beat thanks to its capable operating system and the access it has to the vast variety of apps available in Apple's App Store.

"As a companion device designed to be 'the good screen' you hang out on after work, Apple's iPad (2020) is difficult to beat"