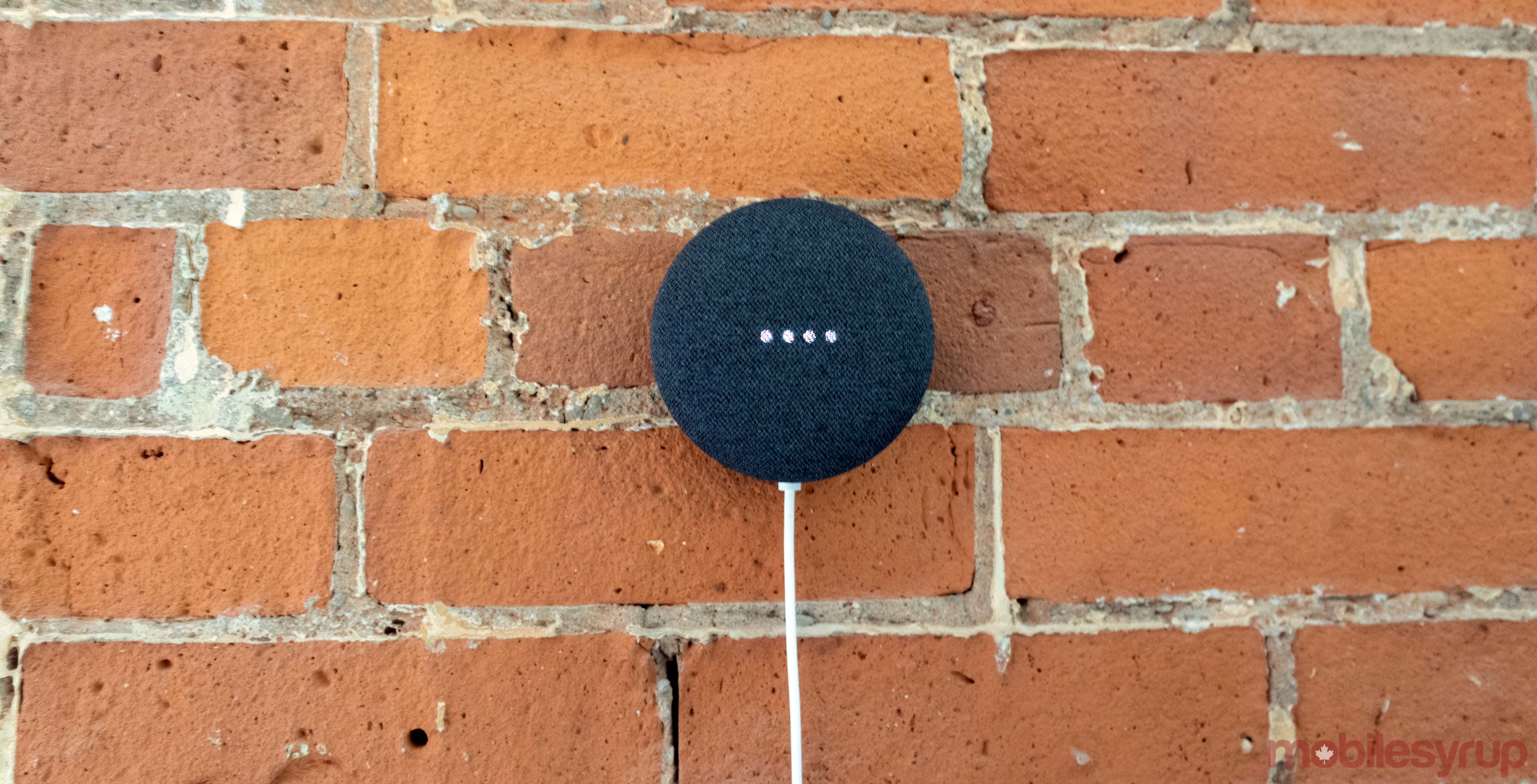 While I enjoyed using the Nest Mini, it’s not that much of an upgrade over its predecessor. The new smart speaker offers quality sound, the ability to wall mount and more interactive touch controls. 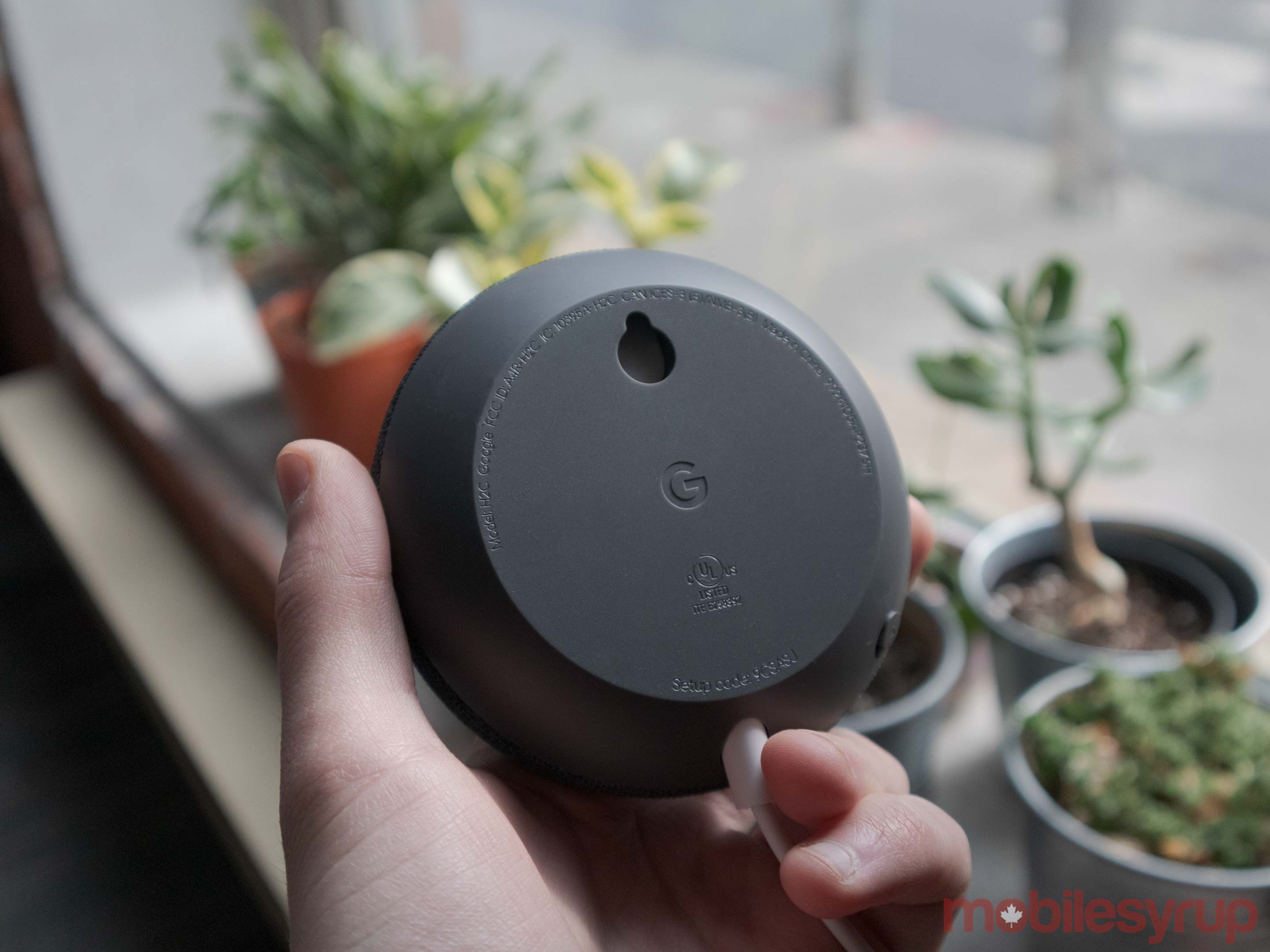 The Nest Mini is the same shape and a similar size to the Home Mini. Additionally, the fabric on the top of the device feels and looks nearly identical. Google says that the Nest Mini’s fabric is made from 100 percent recycled plastic bottles.

It’s important to note that while the Nest Mini can sync up with other Home Minis for stereo pairing, they can’t share the same power plug. Instead of a micro USB port, the Nest Mini has a DC power port. 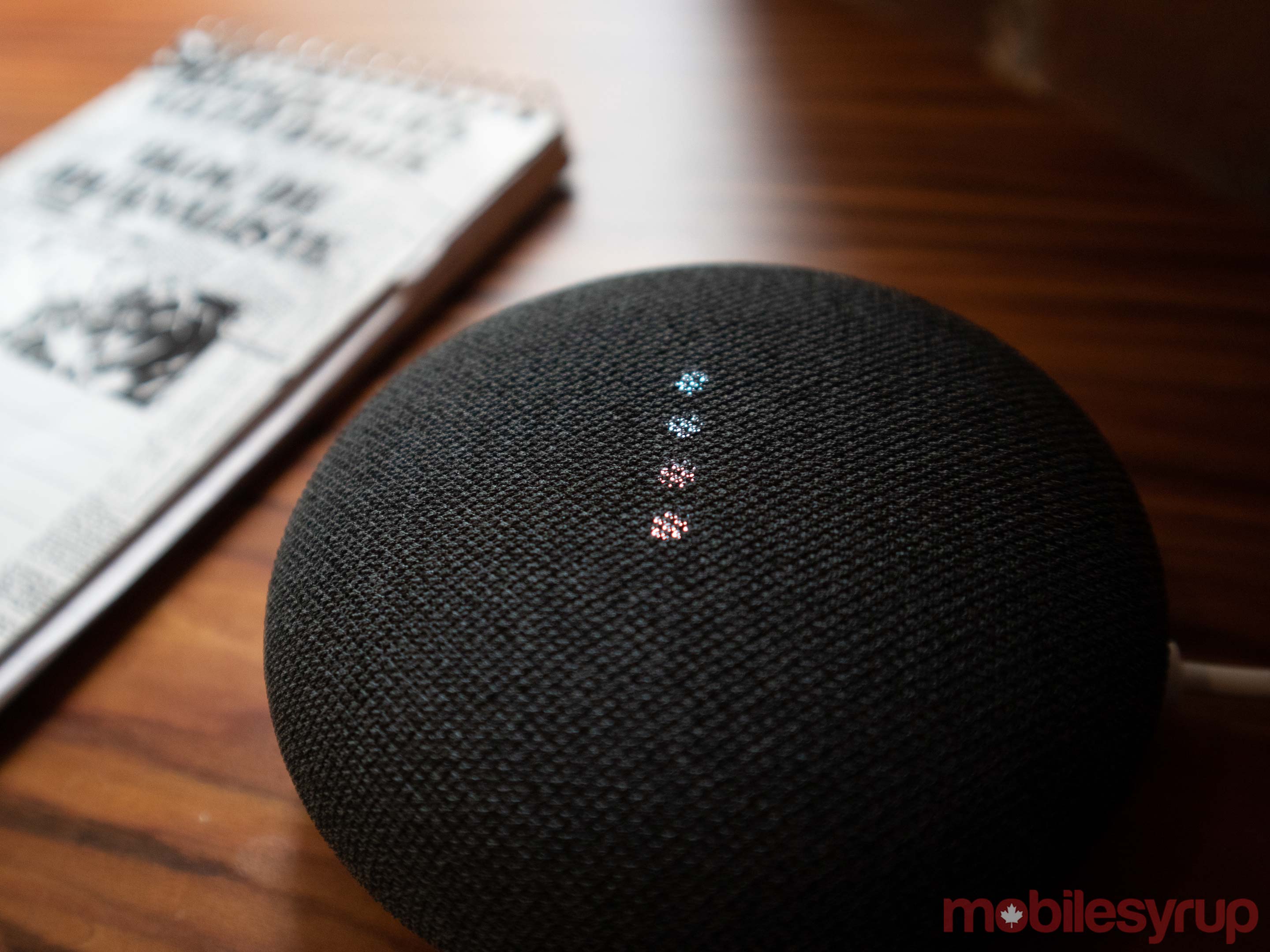 The Nest Mini still isn’t the perfect speaker for a party since it’s only a tad louder than its predecessor. However, what’s important is that I found the tiny smart speaker provided more articulate sound and stronger bass than the Home Mini.

Google says that the tiny device’s bass is twice as powerful as the original Mini. Overall, the speaker features enhanced sound quality, whether you’re listening to podcasts or music.

My home has an open concept living and dining room and the sound filled the rooms adequately. My preferred location for the Nest Mini was my smaller kitchen, where it had me jamming out while washing the dishes and cooking.

The Nest Mini also features Ambient IQ, which allows the device to change its equalizer depending on the noise in a room. I didn’t find that this feature affected the device very much, and while washing the dishes, I couldn’t tell if the device’s EQ changed at all.

Spider-Man it to the wall 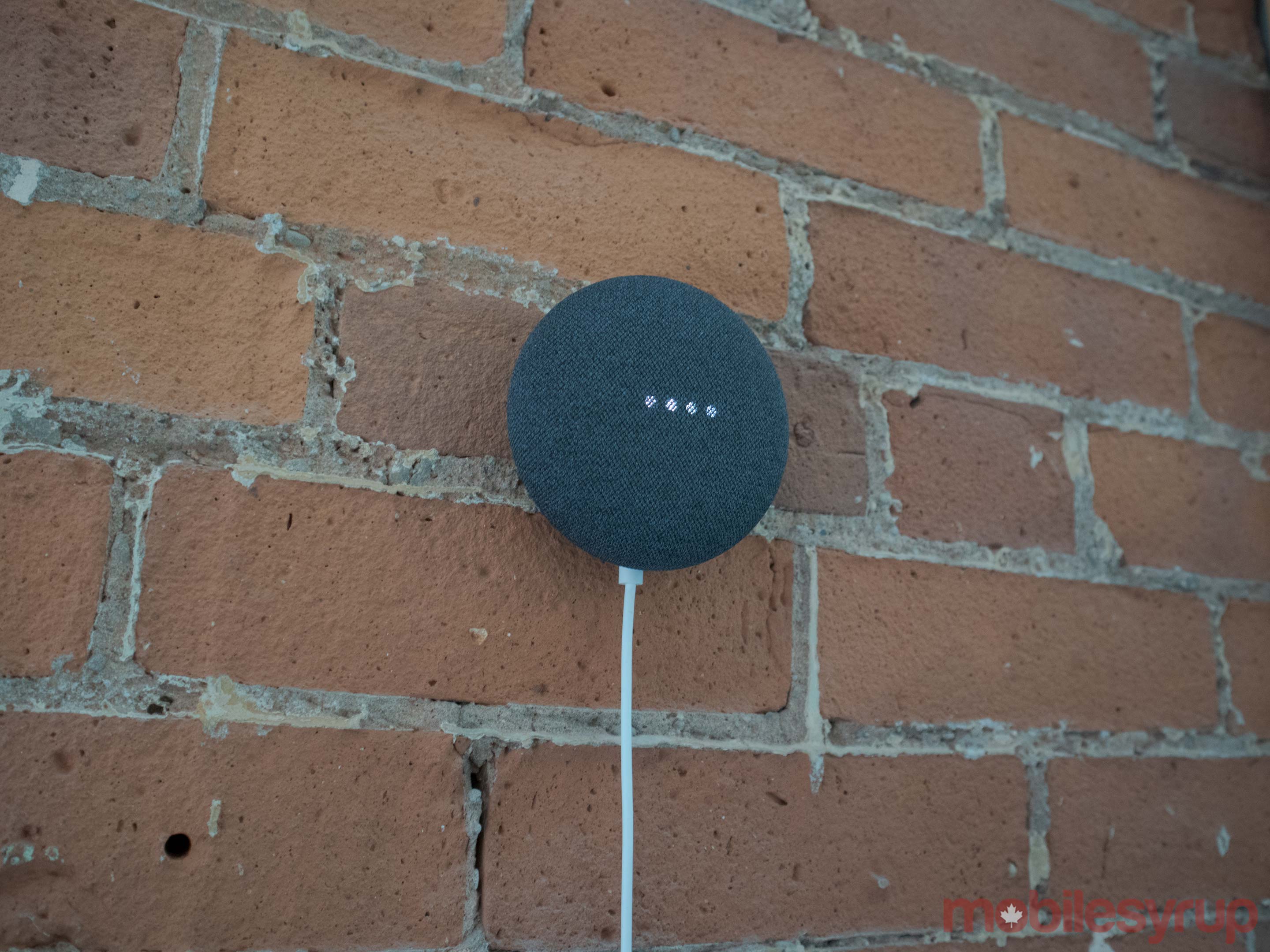 The Nest Mini has a small notch like what’s on a wall clock in the back for wall mounting. While a nice touch, the speaker features a 1.5m long cord, so you’ll still need to make sure it’s near an outlet.

I wanted to put it up above my bed, but this, unfortunately, was impossible because there are no outlets anywhere near it.

Similar to LG’s G7 and G8, the Nest Mini uses the wall to amplify and resonate sound. This makes music slightly louder, but the difference isn’t substantial.

It’s important to note that this also doesn’t work with all types of walls. For example, a brick wall, like in the above picture, would likely not produce a louder sound. 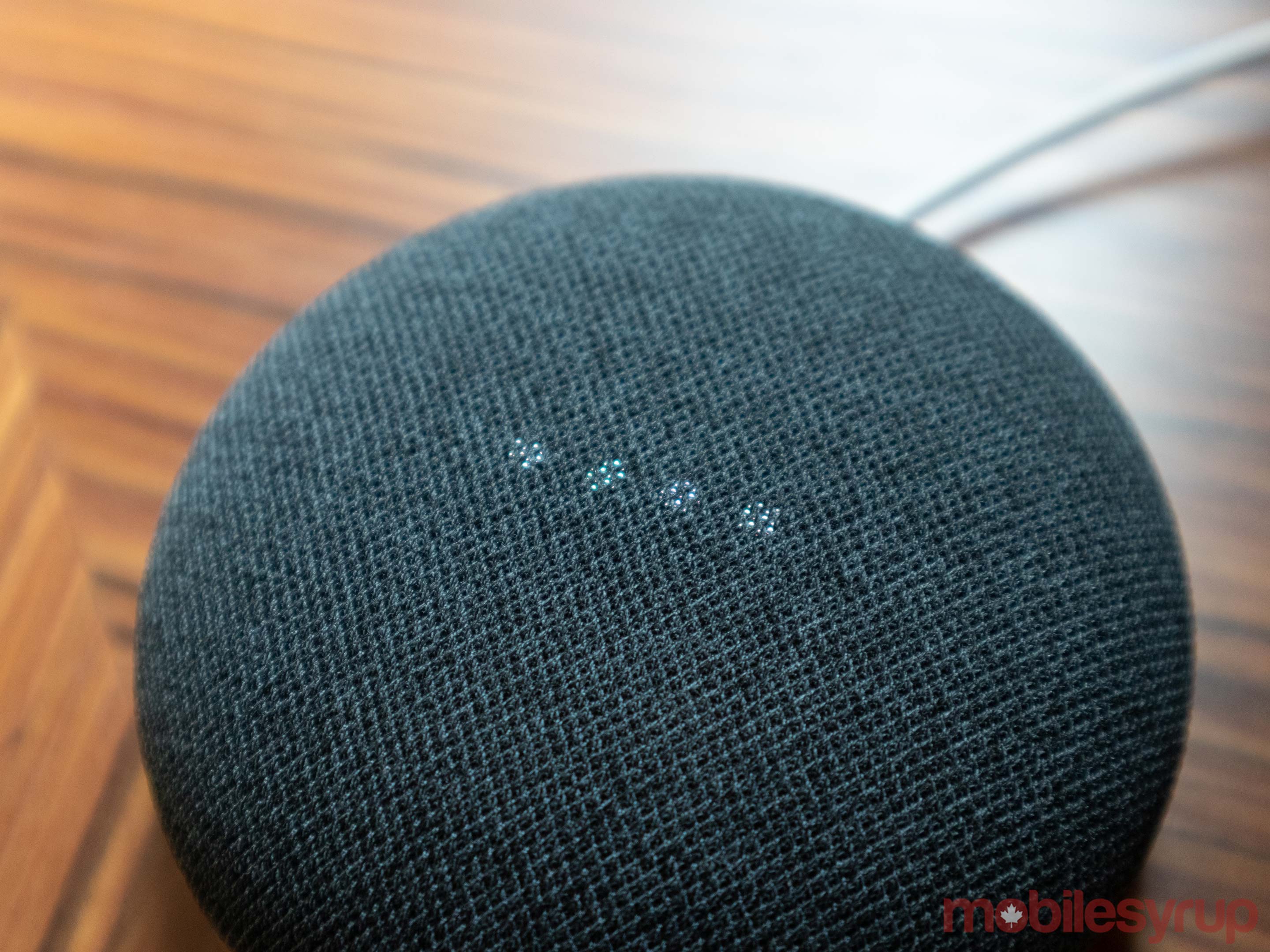 The Nest Mini also has three microphones. I found that occasionally, I’d be in my room or the living room, and the Nest Mini would respond from my kitchen. I was impressed by how well the microphones pick up sound. Still, with music at full blast, the device can’t consistently hear your commands.

The physical volume controls are labelled by two LED lights on each side of the device. Tapping on either LED light makes the device louder or quieter. The touch controls were easy to use and were there for me when the Nest Mini couldn’t detect my voice when it was on full blast.

The Nest Mini features on-device learning that allows it to store information so it can respond quickly to the user’s questions. Unfortunately, the Canadian version of the smart speaker doesn’t have this technology enabled yet. Either way, I thought the Nest Mini responded quickly enough, similar to the other Home and Nest speakers. 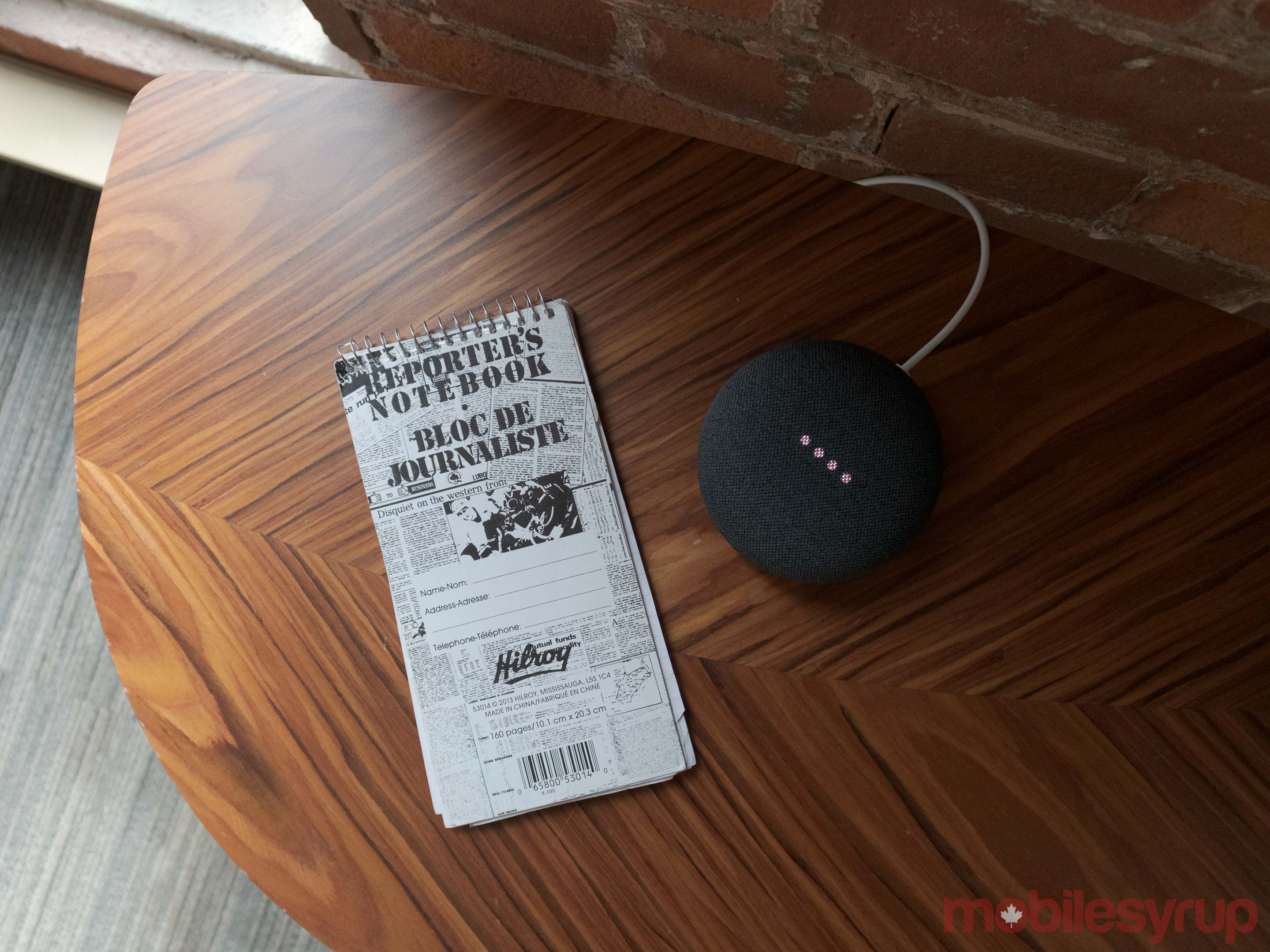 Users can also broadcast to their Nest Mini from their phone and call contacts with Google Duo. The smart speaker also works with a Nest Aware subscription, which allows the device to listen out for critical sounds like fire and carbon monoxide alarms. Then it will report the alarm to the user.

The Nest Mini comes in a cool new ‘Sky Blue’ colour and can be wall-mounted, but if you’re already a Google Home Mini owner, you likely don’t need to upgrade to this new version of the device.