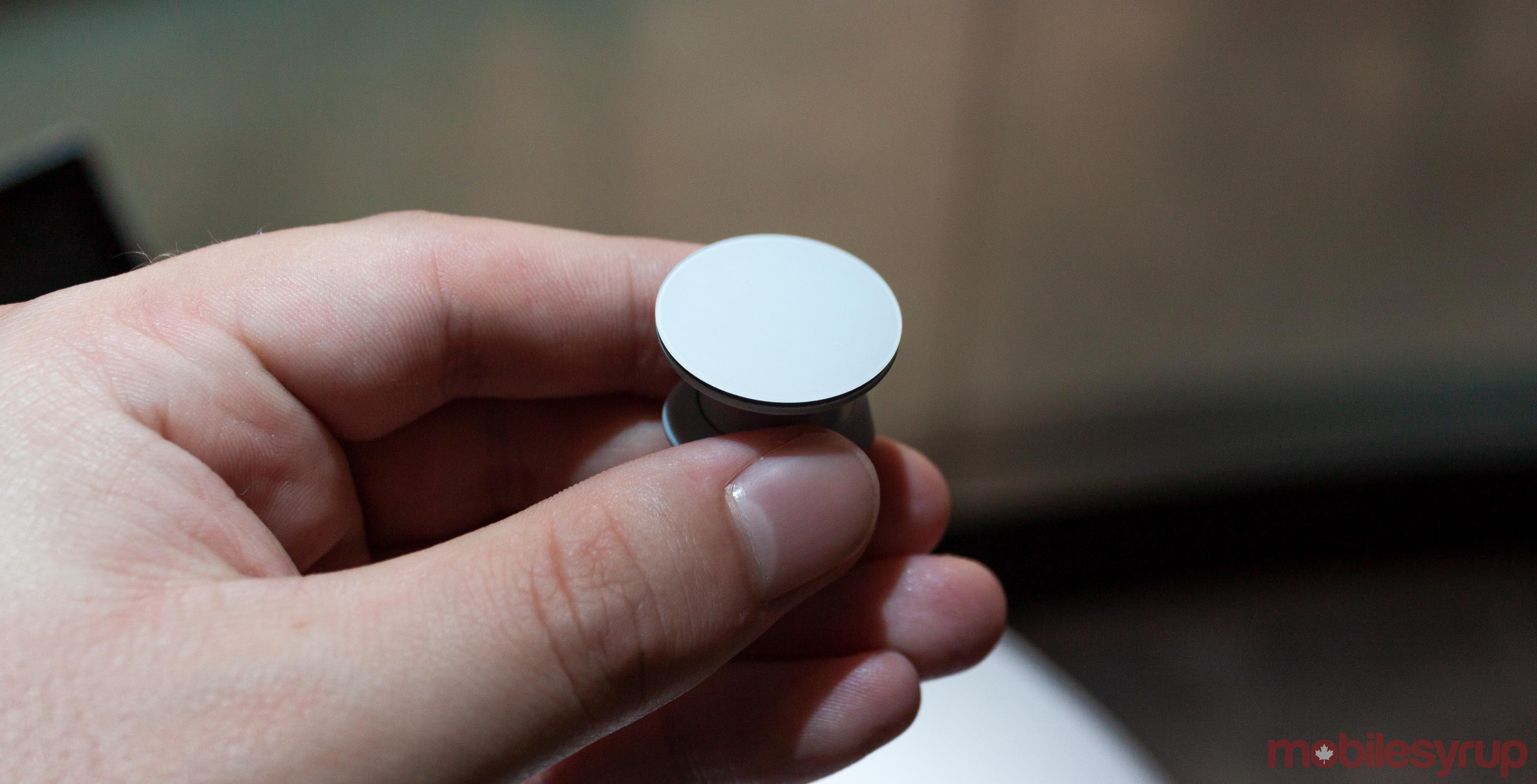 Truly wireless, smart and connected earbuds are the next big thing.

AirPods, Pixel Buds, Echo Buds. Now Microsoft has joined the fray with its Surface Earbuds, and if the showing at its New York event is any indication, they may be among the best.

Following the keynote, I had a chance to spend time with the Earbuds at one of the displays. It was loud — although Microsoft did provide an isolated area to cut down on some of the showroom noise — and busy, but the Earbuds impressed me.

Let’s start with the most crucial thing: sound quality. Microsoft’s last run at audio, the Surface Headphones, did many things right. But, audio wasn’t one of them. It seems the Earbuds fare better.

A Microsoft spokesperson at the event told me the company decided against noise cancellation due to safety. The idea behind the buds is that you can use them on-the-go. If you’re walking around in the city, you want to be able to hear what’s happening around you to avoid danger. It’s a fair point, but considering Sony’s new wireless earbuds offer noise cancellation and a workaround so you can hear what’s happening, Microsoft’s argument isn’t compelling enough. 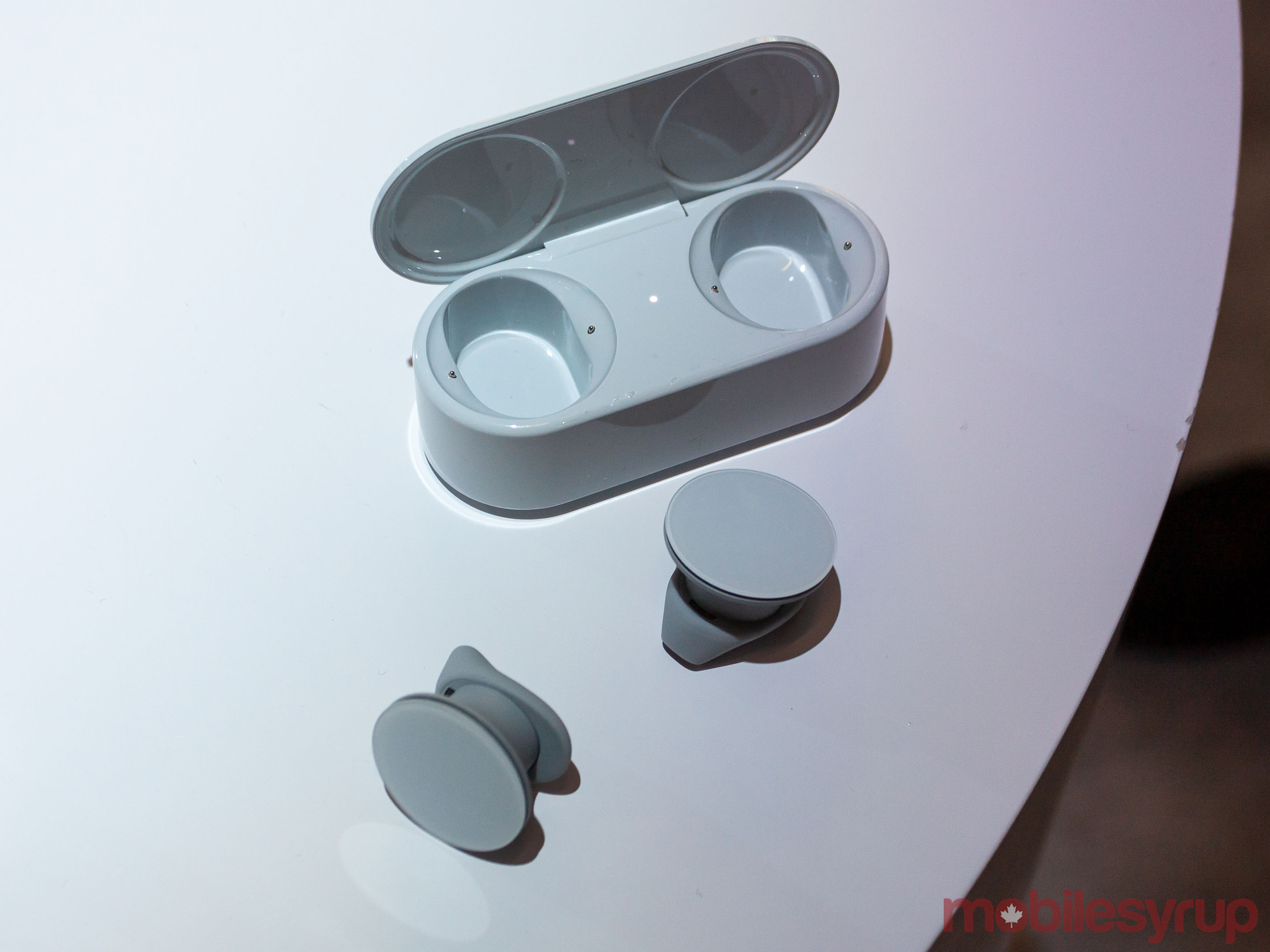 Thankfully, the Earbuds have several other things going for them. For one, the design is unique.

When Microsoft first revealed the large, disk-shaped Earbuds, I thought the company had lost its mind. Turns out it held onto its sanity until the bombastic ending of the keynote and lost it after announcing the Neo and Duo. Anyways, the design of the Earbuds looked odd at first glance. I couldn’t imagine anyone walking around with these large white disks protruding from their ears.

Then I tried them on.

The Surface Earbuds are by far the most comfortable wireless earbuds I’ve ever worn. Granted, I have not worn AirPods, but Apple’s wired earbuds never quite fit comfortably in my ears so the AirPods likely wouldn’t either.

Microsoft engineered the Surface Earbuds to be incredibly light, which helps with the in-ear feel. But Microsoft also designed the Earbuds to work with the natural shape of the human ear. Instead of a circular plastic dome that sits in the ear canal like most buds, the Earbuds’ earpiece is an oval, almost egg-shaped. A Microsoft spokesperson told me that the shape helped the earbud rest on two points of the ear and in practice it worked well. 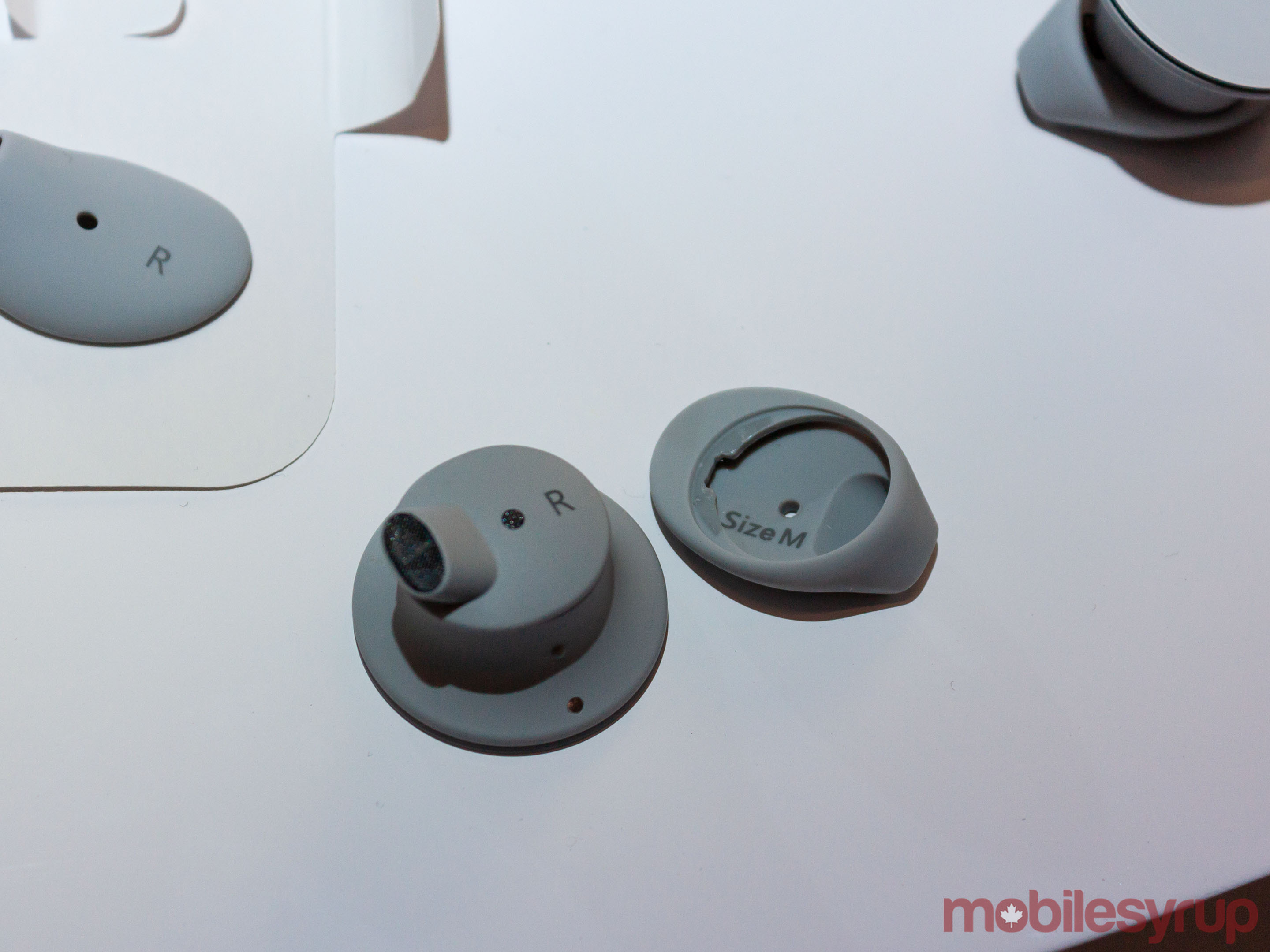 When I tried them on, I had to slide the Earbuds in at an angle, then rotate them down to lock the buds in place. It was a bit confusing at first, but once I got the hang of it, the fit was snug. Of course, more testing needs to be done – the demo didn’t allow me to test how the buds worked if I was moving around a lot or if my ears were sweaty.

The outside of the Earbuds, with the odd disk-shape, is another matter. 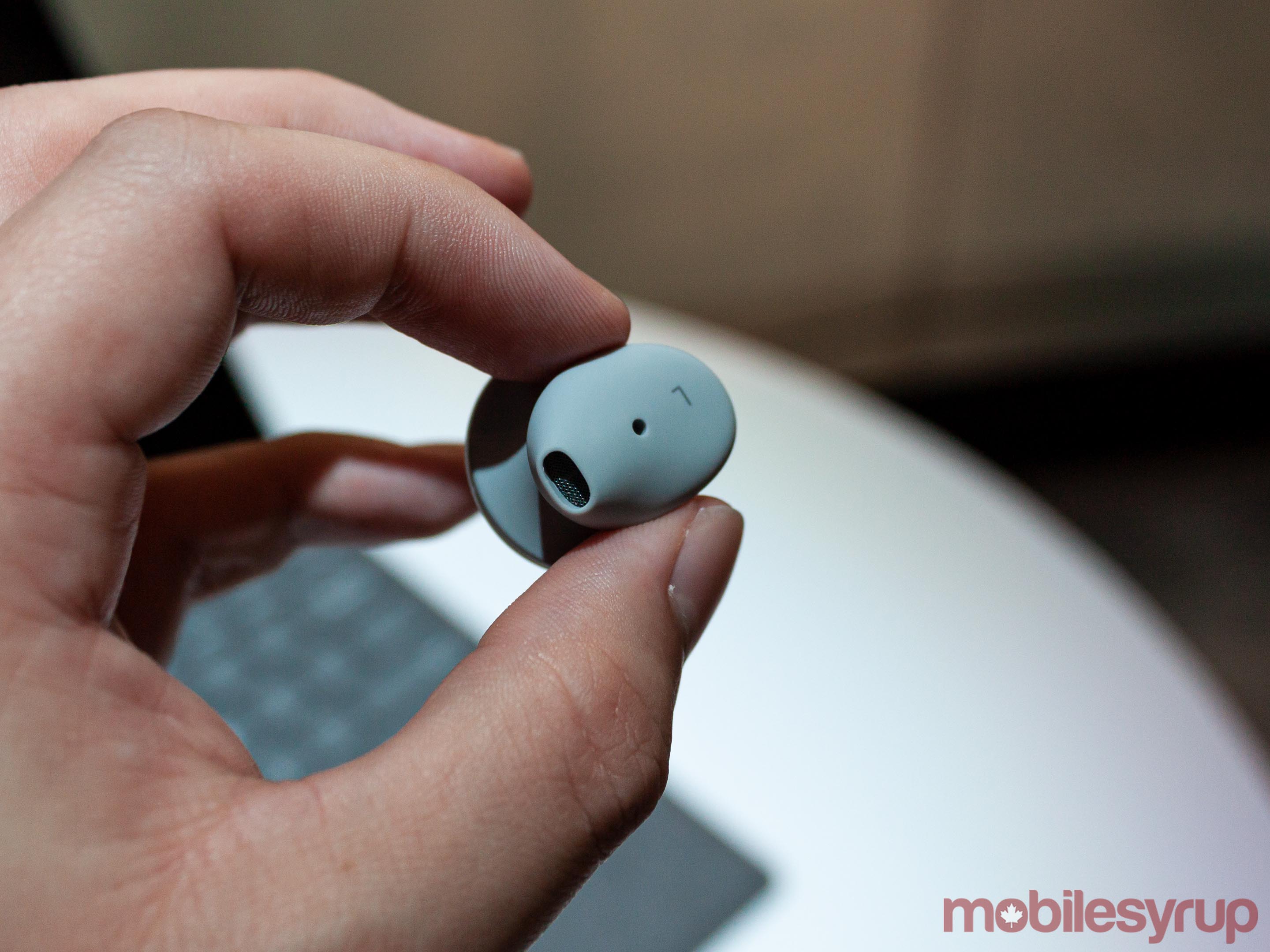 There’s a reason why the Earbuds feature a large disc on the outside: touch controls. You can swipe up and down to change volume or left and right to switch songs. Double-tapping plays or pauses music. A tap-and-hold conjures whichever digital assistant is on the connected device — Cortana on Windows, Assistant on Android and I assume Siri on iOS, but Microsoft didn’t explicitly mention the last one. Further, from the sounds of it, the Earbuds will bring up the default Assistant on Android. Those who prefer Alexa won’t be left out in the cold.

There’s even a gesture to call up Spotify on the connected device. The level of control was impressive, but things started to fall apart when I tried the gestures for myself.

The main issue I had was with the directional swiping. The Earbuds had a hard time determining if I was swiping up and down or left and right. In my brief time with them, I often skipped songs when I wanted to change volume or vice versa.

With some practice, it got better, but it was never perfect. Touching the Earbuds was unpredictable — you never knew what would happen.

Additionally, the Earbuds offer a variety of other smart capabilities, like live translation with over 60 languages and integration with Office 365 — the latter 0nly being in the U.S. for now.

That said, I got a chance to demo how the Earbuds work with PowerPoint, and it was incredible. As I spoke, the buds displayed a live transcription on the PowerPoint slide. Users can also advance the slides by swiping on the Earbuds, but this was disabled during my demo.

Battery and charging options we deserved 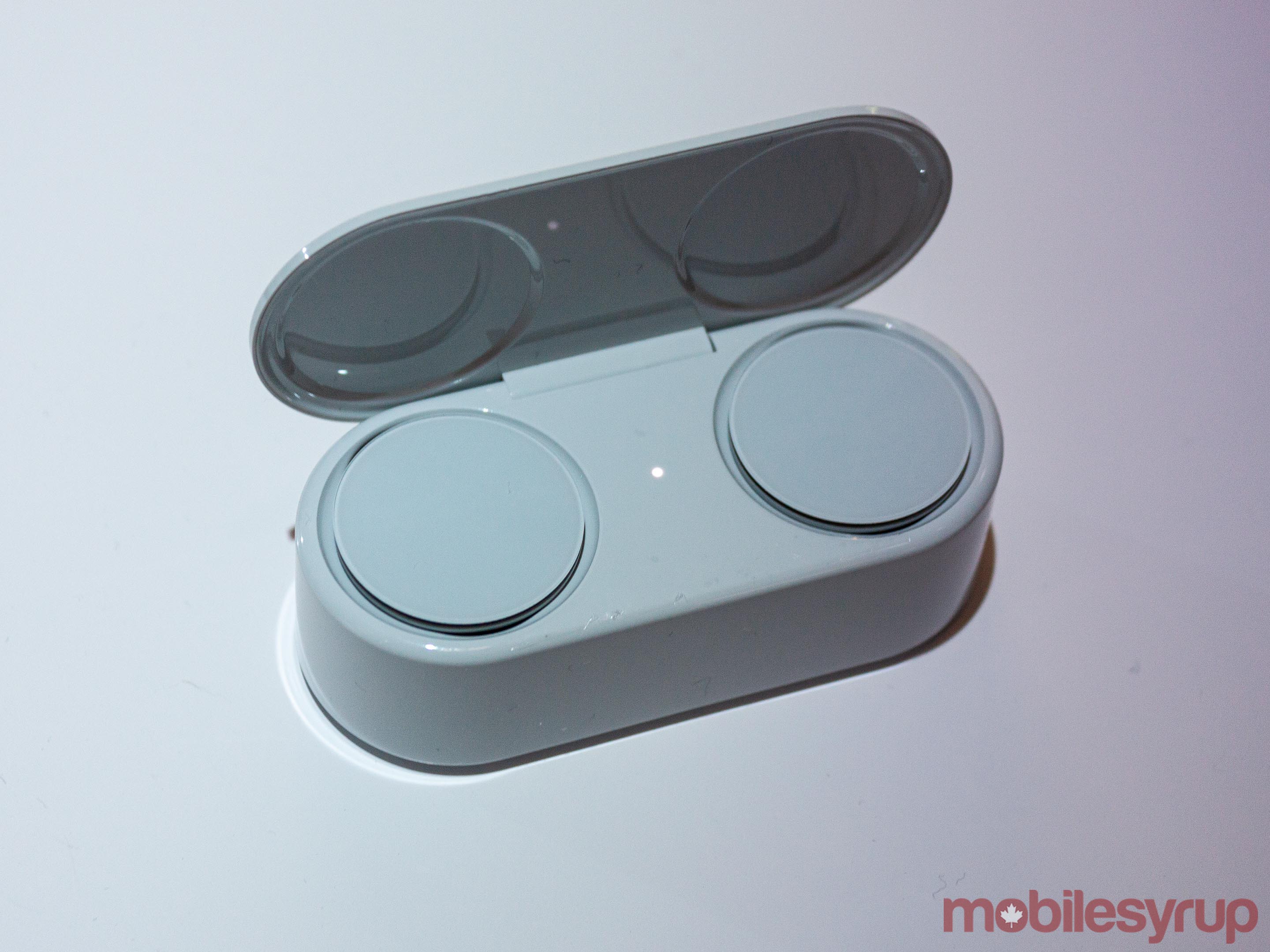 Finally, the battery and charging aspect of the Surface Earbuds was one area I think Microsoft almost nailed. Beyond a few minor issues, the design of the charging case was perfect.

To start: USB-C and wireless charging. That’s all I’ve ever wanted in the charging case of truly wireless buds, and Microsoft delivered.

The charging case itself is large but not heavy. It appears to be made of a glossy plastic, which attracts fingerprints and smudges like you wouldn’t believe. It isn’t a screen, so I can forgive it, but I prefer to keep my devices smudge-free when possible.

When you open the lid, the Earbuds rest neatly inside. There’s a little LED to indicate charging. However, this is also where the biggest issue with the case lies: it’s hard to get the Earbuds out. The disk side faces up, is flat and nearly flush with the case, aside from a small lip around the buds. I found it difficult to grip the buds to pull them out. I imagine with practice, it’d become more natural, but in my testing, it was an annoyance.

Microsoft engineered the case with magnets to prevent users from putting the Earbuds in an incorrect way. The case repels the buds if you get it wrong, which helps since the symmetrical disk shape can make it hard to tell which way they go.

Thankfully, you won’t have to put the Earbuds in the case that often. Microsoft claims the buds last eight hours and the case has another 16 hours for a total of 24 hours of battery. That’s quite a bit more than the AirPods, but on par with what Sony’s earbuds offer without noise cancellation.

Again, it’s hard to say just how well the Earbuds perform without spending more time with them. However, the Earbuds are among the most exciting of what Microsoft announced today and the initial time with them suggests they’re a promising new product.

The earbuds are slated to release early 2020 for $249 USD (roughly, $329 CAD). It’s unclear when the Surface Earbuds will release in Canada, but Microsoft says it plans to drop earbuds in more regions in early 2020.