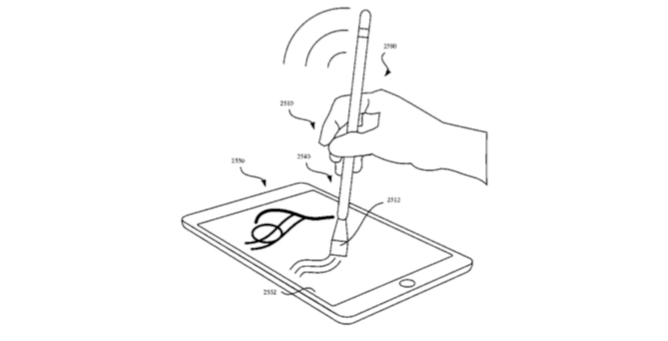 A new Apple patent hints that an upcoming version of the Apple Pencil could feature a changeable tip that resembles a traditional paintbrush.

The patent goes on to say that the paintbrush will be able to simulate the feeling of using a paintbrush through haptic feedback. This vibration could also be applied to make the Apple Pencil feel like a pen, pencil or marker.

Below is a brief excerpt from the lengthy patent filing:

“According to some embodiments, an electronic stylus for use with an electronic device having a display assembly overlaid by a protective layer, the display assembly including a touch sensitive surface that overlays a display, is described. The electronic stylus can include a housing that carries components, where the components can include flexible contact members disposed at a distal end of the housing, and at least some of which are capable of independently flexing relative to one another when contacting the protective layer…”

Though the possibility of using an actual paintbrush with the iPad doesn’t interest me at all given my complete lack of artistic ability, I could see it appealing to artists.

As with all patents, particularly Apple’s, just because one has been filed it doesn’t mean a product will actually be released.

The first-generation Apple Pencil was released for original iPad Pro back in 2015. The new, updated version of the Apple Pencil magnetically attaches to the top of the iPad Pro (2018) and also features gesture controls.