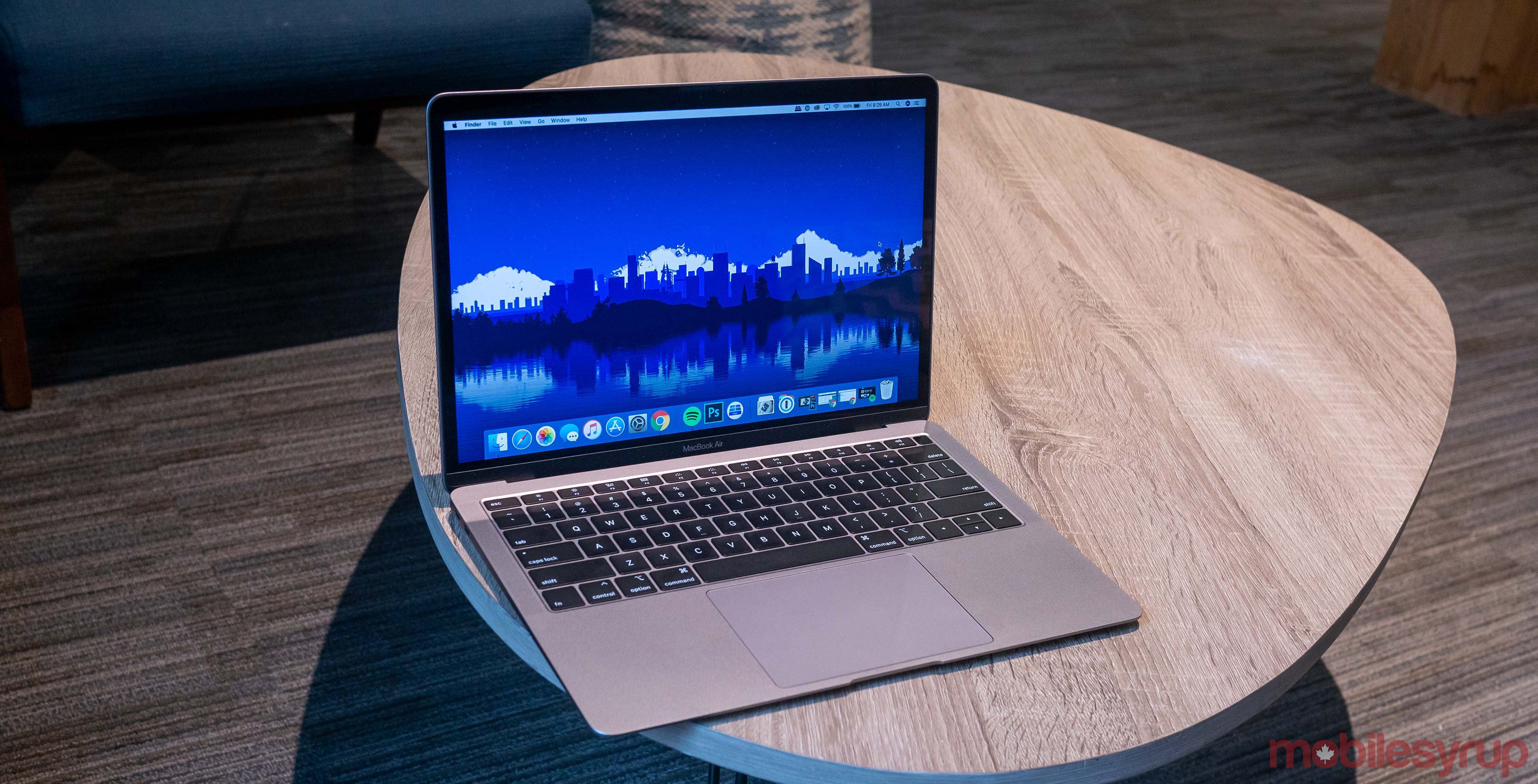 Though Apple has stated in the past that the new MacBook Air features the same third-generation Butterfly keyboard mechanism as the 2018 MacBook Pro, a recent iFixit teardown has confirmed.

iFixit, as the website does with nearly every tech product, tore apart Apple’s 2018 MacBook Air, confirming that the new version of Apple’s popular laptop features a silicon membrane under its keyboard keys.

Similar to the third-generation MacBook Pro, this thin layer of silicon should, in theory, prevent debris from getting stuck under the laptop’s keyboard, preventing keyboard reliability issues. It also gives the keyboard’s keys a squishier feeling that Apple often describes as being more balanced. 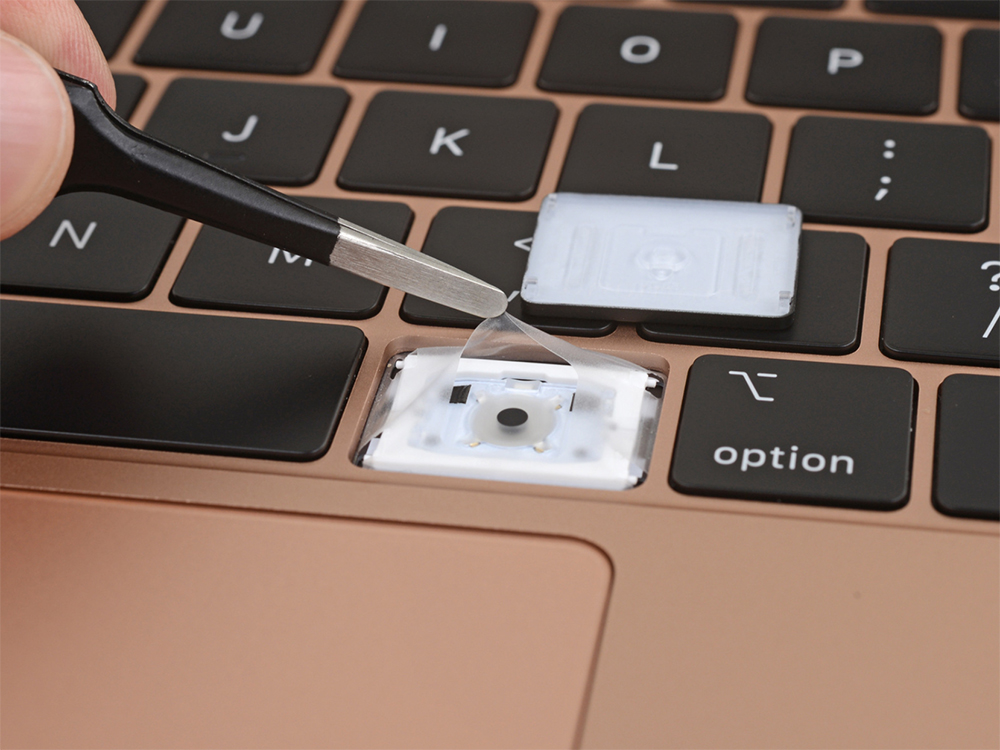 Given the controversy surrounding the butterfly keyboard featured in Apple’s more recent laptops, which forced the company to launch a replacement program eventually, it’s not surprising that the new MacBook Air features the new keyboard tech.

iFixit also uncovered that the laptop features the same pentalobe screws on its base that require a specific screwdriver to open. The computer also features a tiny logic board, rather large speakers and what iFixit calls a “radiator-esque heat sink.”

Under the logic board is Apple’s T2 security chip, as well as Intel’s Thunderbolt 3 controller, 128GB of flash storage and 8GB of LPDDR3 RAM.

In an uncharacteristic move, the two Thunderbolt 3 ports featured in the new Air are modular. The new Air’s 49.9Wh battery and speakers are secured by pull-to-remove adhesive tabs, according to iFixit.

Overall, iFixit says the MacBook Air is far more repairable when compared to other recent Apple laptops for a variety of reasons. For instance, the Air’s Touch ID sensor is modular and doesn’t require a full logic board replacement to replace. Further, as was first reported by MacRumors, the entire top of the laptop’s case doesn’t need to be replaced when a new battery is installed, unlike every MacBook released since 2012. 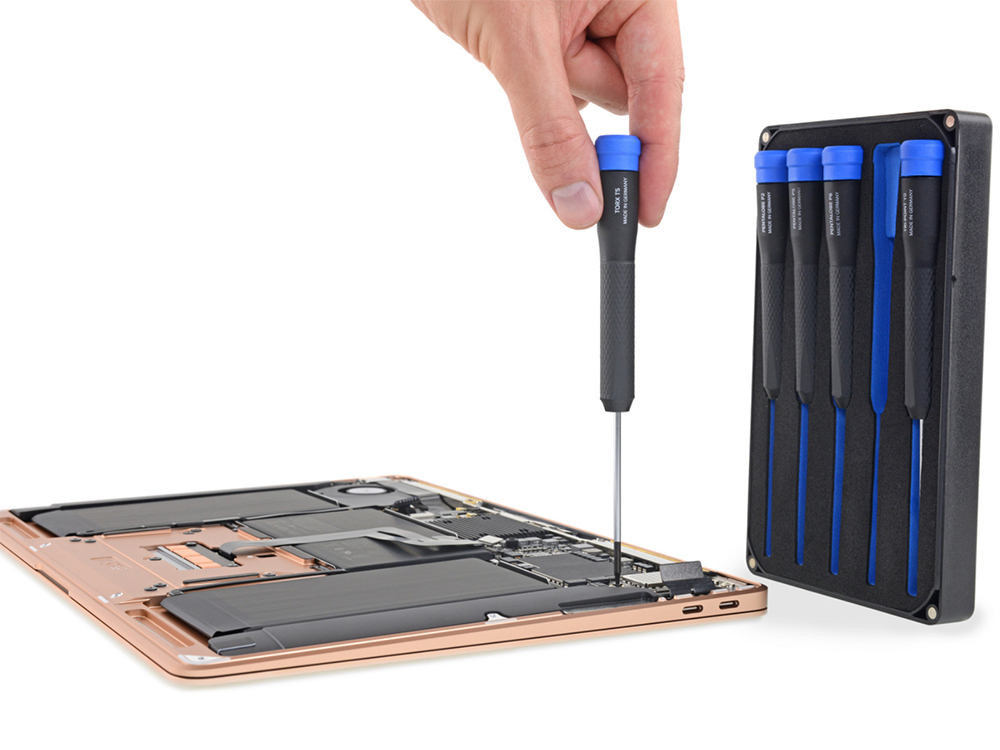 Though Apple has made significant changes regarding the Air’s repairabilities, especially when compared to other laptops manufactured by the company, the device still earned only a three out of 10 on iFixit’s repairability scale.

I’m currently in the process of reviewing Apple’s new MacBook Air and I’ve been impressed with my experience with the laptop so far. It features the best aspects of the Pro, the 12-inch MacBook and the classic Air, all combined into a sleek-looking device.

That said, the fact that the laptop features a more energy-efficient 8th-generation Intel Core i5-8210Y processor, rather than the more powerful i5-8250U included in competing devices like Microsoft’s Surface Pro 6, remains disappointing.