Hands-on with Samsung Pay, coming to Canada later this year 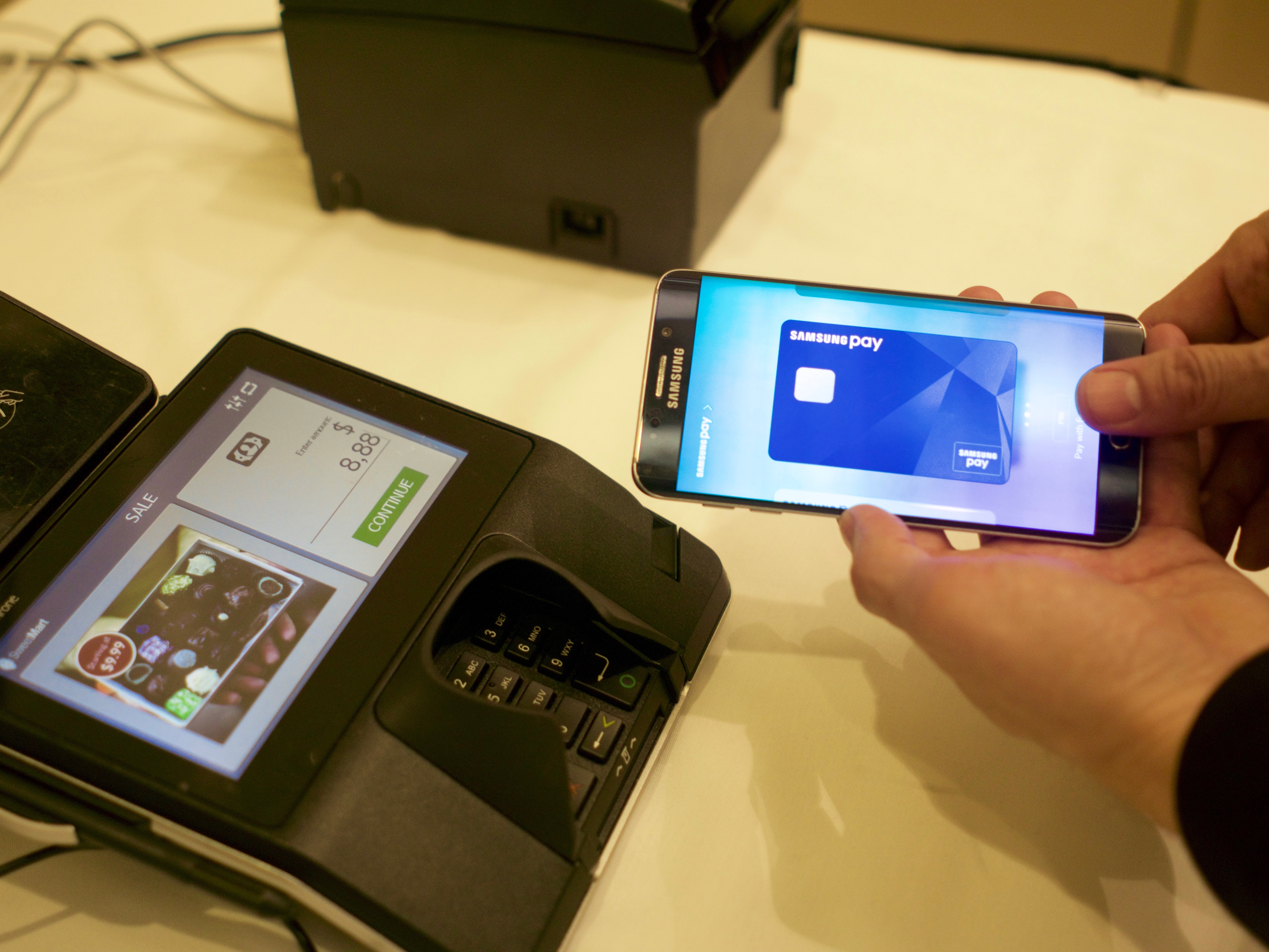 If the last two weeks have been an indication of anything, it’s that mobile payments are about to be a big thing in Canada.

Nowhere was that more apparent than at this year’s Dx3, which just wrapped up on Thursday. In a small conference room, the MobileSyrup team got a chance to go hands-on with one of the major mobile payment platforms that has yet to come to Canada, Samsung Pay.

If you had the chance to use Apple Pay, then almost everything about Samsung Pay will be familiar. The platform allows S7, S7 edge, S6, S6 edge, S6 edge+, Note5 and Galaxy A5 owners to save their credit card information to their device and then use it to tap and authorize payments at point of sales terminals. A combination of fingerprint authentication, credit card tokenization and Samsung’s security platform, Knox, help keep a person’s credit card information safe. It’s convenient, secure and definitely just a bit cool.

And unlike other mobile payment solutions, Samsung Pay is not only compatible with the latest NFC terminals, it can also work with older magstripe card readers as well. This is thanks to Samsung’s 2015 acquisition of LoopPay, a Massachusetts-based startup the South Korean company paid approximately $250 million USD to acquire. The company’s latest phones — including the upcoming S7 and S7 edge, as well as many of the devices it released throughout the course of 2015 — have a small magnetic coil embedded within their body. It’s this coil that allows any Samsung Pay-equipped smartphone to communicate with magstripe point of sales terminals.

In practice, the work Samsung has in this department will be helpful in Canada, but it won’t quite be the huge differentiator it is in markets like the U.S. According to a Samsung spokesperson, approximately 50 percent of Canadian merchants, both large and small, have a point of sales terminal that is equipped to handle NFC. In comparison, that number is closer to 10 percent in the U.S. and around 30 percent in other developed countries. 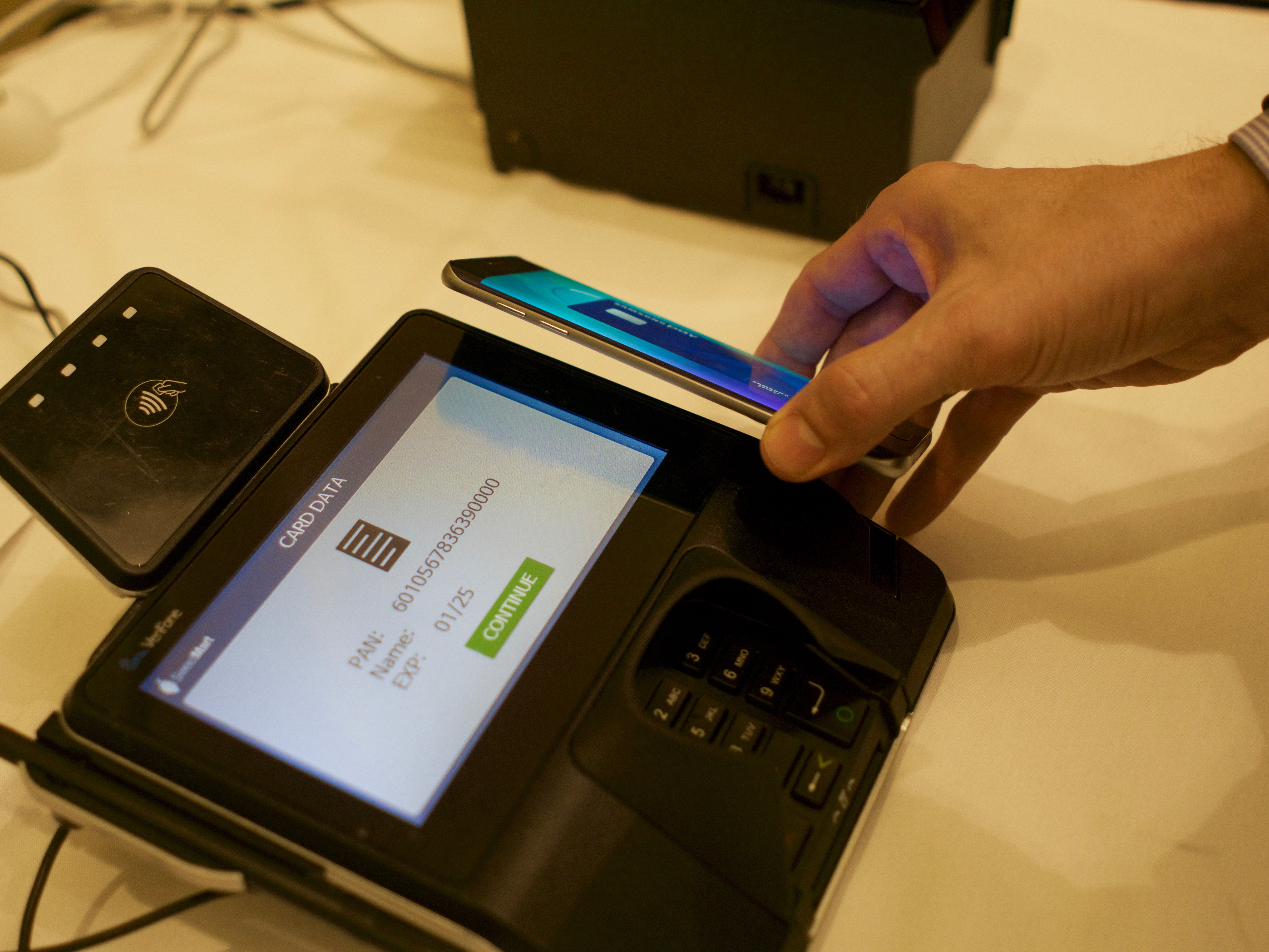 Moreover, from a merchant’s perspective, Samsung Pay is also a bit unusual in that the company has decided to not charge a transaction fee whenever it helps facilitate a payment. At least, that’s the case in the U.S. The company wasn’t able to confirm whether that will be the case in Canada, as well.

Otherwise, Samsung Pay is a no nonsense affair. There’s no NFC SIM card Samsung smartphone owners have to get from their carrier, and, well, they also don’t need to be on a specific carrier to use the platform either. In other words, the platform just works.

Samsung says its mobile payment platform takes a total of four seconds to process the entire transaction, and in our brief hands-on experience, the technology seemed to match this claim.

Of course, one major question remains, which is whether Canadian banks intend to support the platform. At Dx3, Samsung wasn’t ready to comment if Samsung Pay will support Visa and MasterCard at launch in Canada.

We’ll find out the answer to that question when Samsung Pay launches in Canada later this year.

Related reading: Chat bots are back and they want to sell products to teens