These 3 mobile apps will change the way you drive 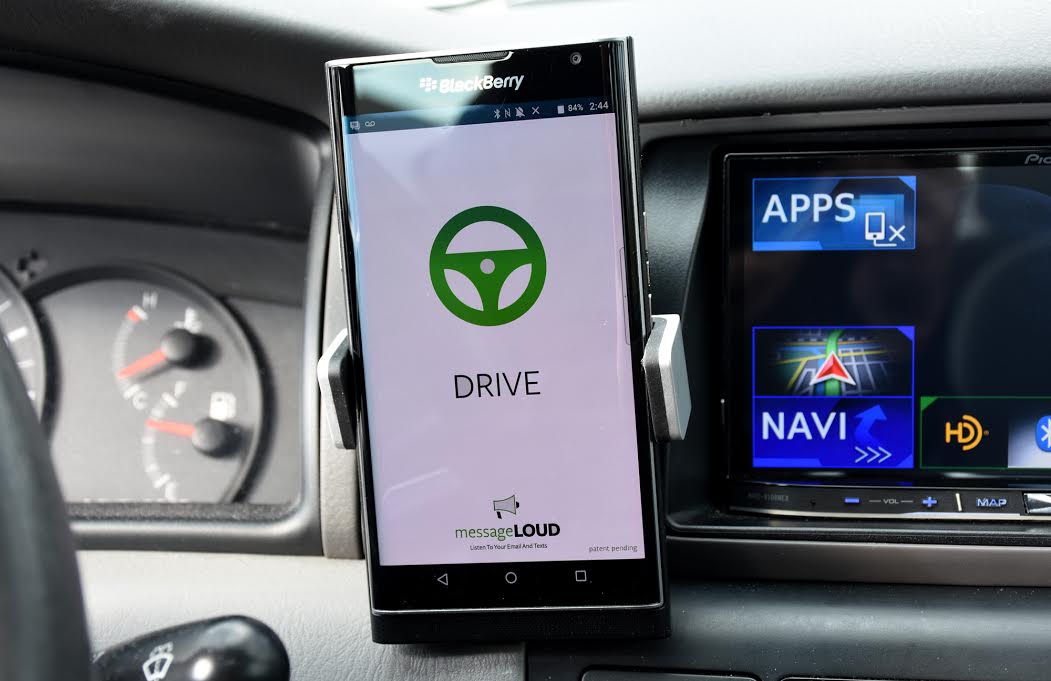 Given the laws against smartphone usage in the car, it would seem odd — or perhaps, appropriate — that apps specific to the car are only growing in number and sophistication. Not surprisingly, the focus on several of them is safety, with a touch of convenience.

Not many apps in this category necessarily stand out, though it is already a crowded space of the little-known variety because so few are capable of truly changing driver behaviour. The three in this particular roundup claim to do just that in unique ways that are very different from each other. 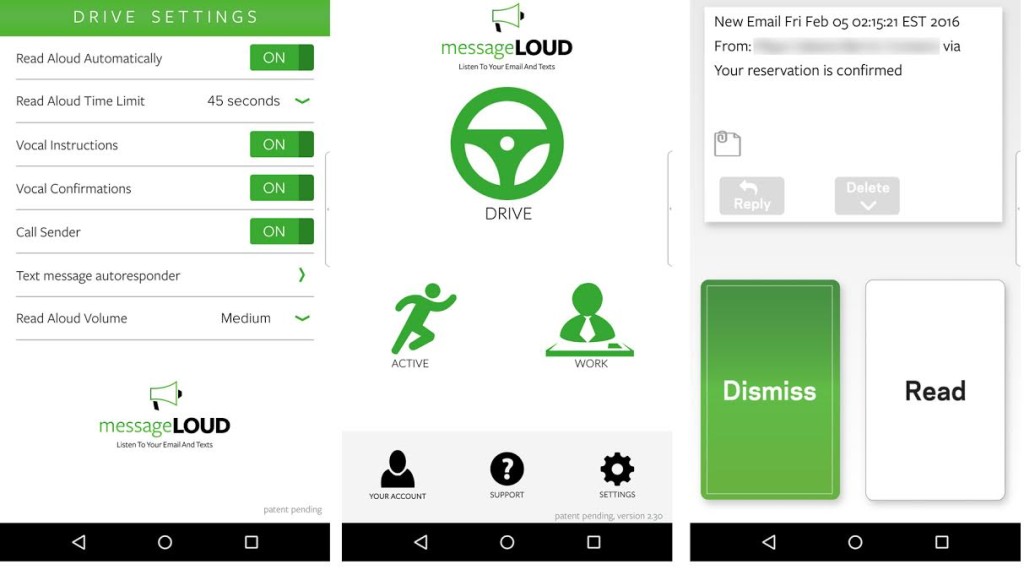 There are no easy ways to listen to incoming messages and emails while driving. Even fewer if you want to include email from various accounts. A New York-based startup, messageLoud aims to tackle both simultaneously by making it all audible, and using gestures to swiftly deal with them after the fact.

For the moment, this app is only for Android, with an iOS version in the works for launch later this year. It also starts off with a 30-day trial that unlocks all the features, and costs around $2.65/month or $26.62/year (based on current exchange rates) thereafter.

Setting up the app to link to email accounts, including Gmail, Yahoo, Hotmail, Outlook and Exchange accounts is easy and straightforward. It also links seamlessly to contacts, so that it knows who is texting. This support is set to expand with WhatsApp this month, Facebook Messenger in April, Skype in June and Android Auto sometime after. Beyond that, Tango, Viber and Telegram are slated for the latter months of the year.

That’s an impressive list, despite missing Hangouts, because of how it covers most of the messaging apps people use. messageLoud is also broken down into three distinct modes: Drive, Active and Work. They are not altogether different from each other, save for the fact Drive is entirely gesture-based, while the others are more about tapping buttons onscreen.

In reading out incoming emails, it notes who each email is from, the subject line, whether or not there’s an attachment and asks if you want to call the sender, which you can do with a single swipe up on the screen. Perhaps paradoxically, messageLoud’s developers don’t believe in voice as a safe response to any of its features, opting instead for the quick gestures to make things happen.

A single tap pauses the reading; a double-tap dismisses the email or message. A swipe down deletes it and an upward swipe calls the sender. The lack of voice recognition takes away an input option that could make it easy to respond to an email with a quick word or line.

Responding to texts by voice is already possible on Android anyway, so that isn’t a total loss, but in looking to be versatile, it’s an omission that irks. When connected via Bluetooth, messageLoud’s readings flowed through the car’s audio system, yet still opened up the chance to use Google Now or S Voice (at least in newer vehicles that supported it) to respond to texts independently of the app.

Overall, it’s a nice idea and given that the app is a mere two months old, it’s understandable that it is still finding its way. The subscription may also be polarizing, but good car apps with potential aren’t really easy to find, either. 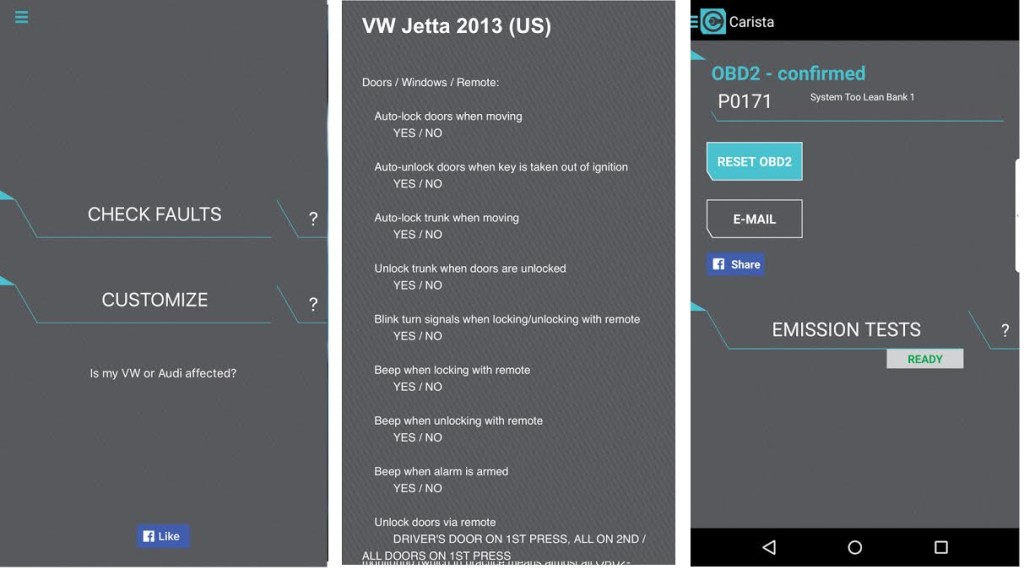 Plugging in a module into an OBD-II (On-Board Diagnostic System) port isn’t new anymore. No-name units are already available online, and branded ones easy to find, too.

In that vein, what makes Carista so different? It’s an app that tinkers with a vehicle’s internal computer to alter certain features.

Well, it doesn’t only do that. It does keep tabs on a vehicle’s diagnostics and includes an overheat alarm that will alert drivers if the engine hits a dangerous temperature. The customization sits somewhat separately from those, but everything works through the app.

In “customization,” we are talking about tweaking existing features a vehicle already has.

For example, if I had a car that supported it, I could use Carista to change or remove the beeping tone that comes on whenever a driver or front passenger isn’t wearing a seatbelt.

I could also open the sunroof by holding the key in the door lock or keep lights from blinking whenever I unlock the doors using the remote. The list of options to turn on or off are more numerous that one might imagine. For some vehicles, there are more than two dozen different options. Others have less, a select few even more.

However, there are a number of caveats to how Carista does this. First, customization is currently limited to certain makes: BMW, Mini, Toyota, Lexus, Scion, Subaru, Volkswagen and Audi. SEAT and Skoda are also supported, though they have no presence in Canada.

Second, only certain years and models are supported within that short list, some of which are further limited by the market they were launched in. The model year also matters. A Camry from 2006 or earlier is left out, while 2007-later models are included. For general diagnostics, though, any vehicle after 1996 with an OBD-II port will work with Carista.

For the basic features, like diagnostics and temperature, any Wi-Fi-enabled ELM327 module should work (generic Bluetooth ones won’t). Branded ones also usually won’t.

The Lemur BlueDriver, for example, can’t do anything with the Carista app at all. There is a Carista-branded one available directly from the company website (for $40 USD) that also supports Bluetooth 4.0, making it suitable for both Android and iOS. Incidentally, on iOS, that one can only work with the Carista and OBD Fusion, an app that the former uses for live vehicle data, due to the proprietary Bluetooth LE connection required.

A $20 USD in-app purchase unlocks everything, which is primarily unlimited customizations. That might seem steep, but considering what dealerships charge to make these types of adjustments, it can be a very good deal. 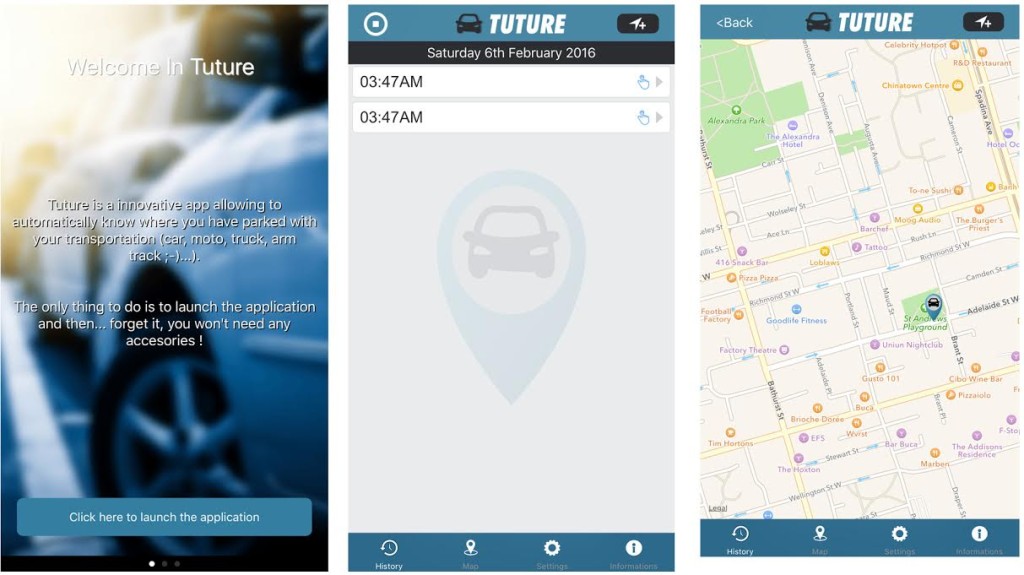 This app from a French developer is less about driving, and more about parking. The premise is simple: it remembers where you parked automatically upon leaving your vehicle. If it’s in an underground lot, it remembers the entry point.

What Tuture does isn’t new or special, but the fact it’s designed to work without the need for input makes it intriguing enough to try out. It is currently only available for iOS, and an Android version will come soon.

At first glance, the poor English translations give a bad impression. Somewhat surprising for an app from France, but judging its merits squarely on performance, it is a mostly positive mixed bag. Though it was technically possible to manually input my location, I couldn’t always do it, and didn’t know why. Other times, it worked flawlessly. It also worked automatically after a few test drives where nothing happened. Again, I couldn’t troubleshoot or confirm why any of this was happening.

It for those reasons that I give Tuture a fighting chance. These are kinks that can and should be ironed out. Once they are, it becomes a very capable app for something that people need more than they realize. Parking outside in a big mall lot, or in the dark, getting to one’s car faster is always appreciated. In that respect, there is a safety element here that is applicable to many.

With that said, the incessant ads used in the free version are terribly annoying. It is only worth paying the $11.99 fee to remove them if you deem the app to be helpful in what it does. Otherwise, you could always find an alternative that doesn’t cost as much, or if your level of patience includes dealing with ads.