GO Transit mobile apps have ‘reached the end of its lifespan,’ directs people to its mobile website 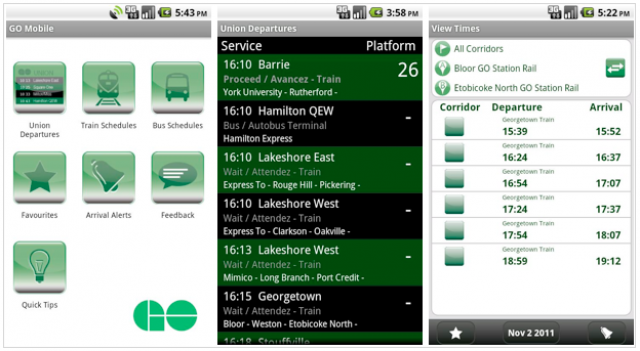 Go Transit has axed its family of mobile apps, and is now telling users to access transit information through its website.

The GO Transit mobile app was available on iOS, Android and BlackBerry and gave riders direct information about train and bus schedules, and provided departure notifications, as well as the ability to map routes across the GTA.

According to its site, GO states, “Please note that the GO Mobile app has reached the end of its lifespan.” The app was created by the DMZ at Ryerson University in 2011. Metrolinx spokeswoman Anne Marie Aikins said the app had a number of technical issues that would need “significant” work to keep it active.

GO is suggesting users access the mobile version of its website for the latest information, “(The mobile site) does require behaviour change from people and we know that causes some angst. It’s new and they have to learn something different but it was designed for that purpose.”

There are 3rd party apps available, such as GOToronto, but it costs $1.19 CAD. In addition, GO has also listed the Triplinx app that is available for iPhone, Android, Windows Phone, and BlackBerry.