When the Competition Bureau completed its review of the TELUS/Public deal they noted that Public Mobile believed its current $19/month Unlimited plan is unsustainable and planned to discontinue it “due to financial sustainability issues.” The Bureau, according to its report, was concerned that the proposed transaction might accelerate the death of this plan and advised TELUS to “continue to offer, under the Public Mobile brand, a $19/month ‘Unlimited Talk’ plan until at least the end of 2014.”

The $19 per month plan is still in operation, but getting the quick boot is one of Public Mobile’s core values of offering Unlimited data. According to an internal doc we received, Public will begin to notify existing customers that their unlimited data option is no longer available and will be replaced with a cap of 1GB per month. The doc says this move is in the best interest of managing “internet traffic to ensure all users have a consistent, high quality experience.

Perhaps this is part of TELUS making Public Mobile “much more profitable, or profitable period.”

Update: We’ve received some additional info on the finer details. While Public Mobile will no longer be offering unlimited data, cutting it down to 1GB per month, the doc and their site now notes that “If you do go over 1 GB, you will notice a slowdown in your service after a reasonable buffer.” 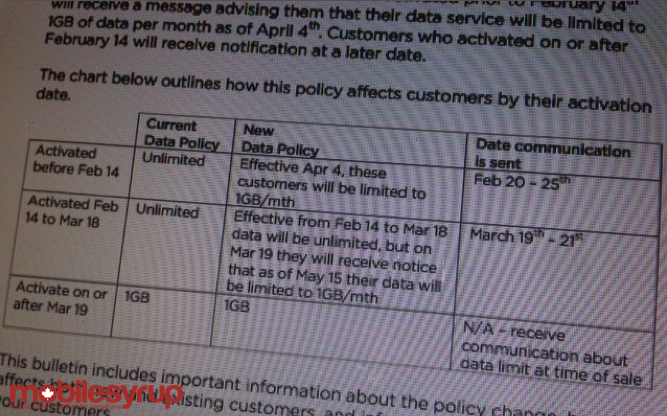 “Over the next few weeks, we will be letting out existing customers know that the unlimited data currently included as part of their plan, will be replaced with 1GB of data.

Public Mobile is committed to being open and honest about policies such as how we manage internet traffice on our network to ensure that all users have a consistent, high quality experience.

There are a small number of customers within our base who have been using excessive amounts of data. This strains our network and can negatively impact the quality of service that other customers receive. For the majority of our customers 1GB is more than enough data to surf the web, access social media and send or receive emails.