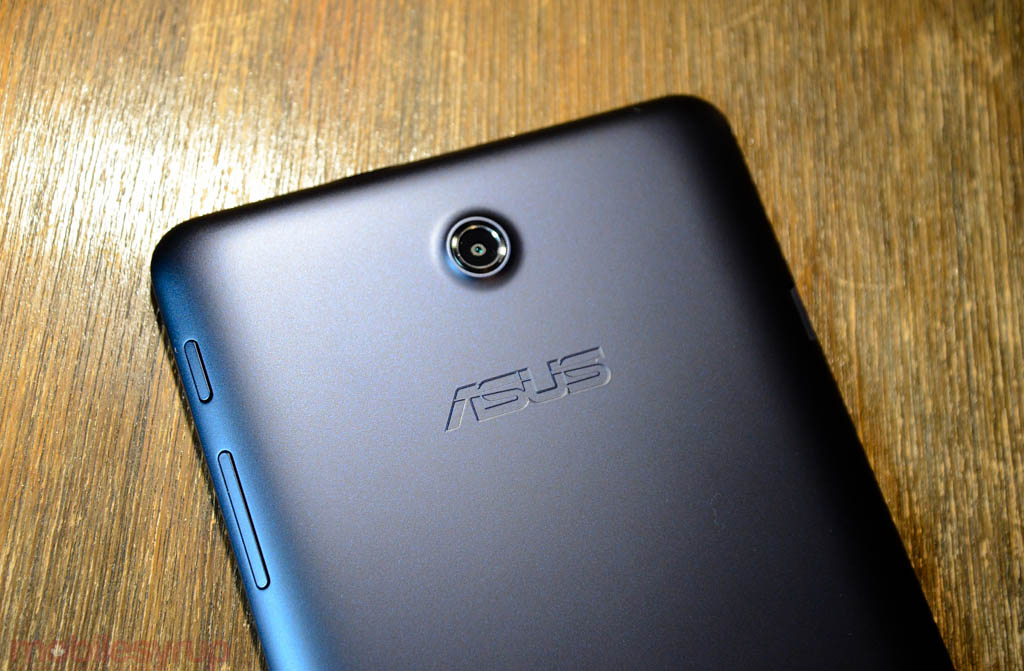 What can a $159 tablet get you these days? Quite a bit, if you’re willing to take the plunge.

The king of low-cost Android tablets, and the manufacturer of the original and newly-released Nexus 7, has unveiled the oddly-named MeMO Pad HD 7, a seven-inch tablet that takes a lot of cues from the original Nexus 7, but adds a bit of the company’s own flair. It’s not the best tablet on the market, and we’re sure Asus wouldn’t mind you spending the extra $70 on a new Nexus 7, but the MeMo Pad should find a home in many stockings this holiday season. 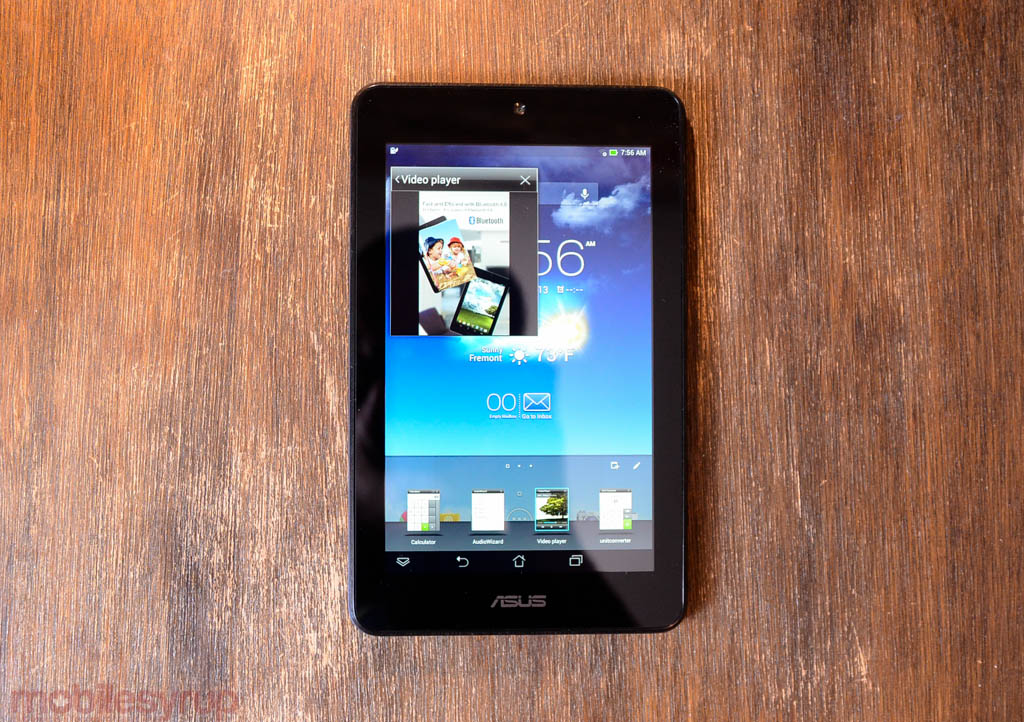 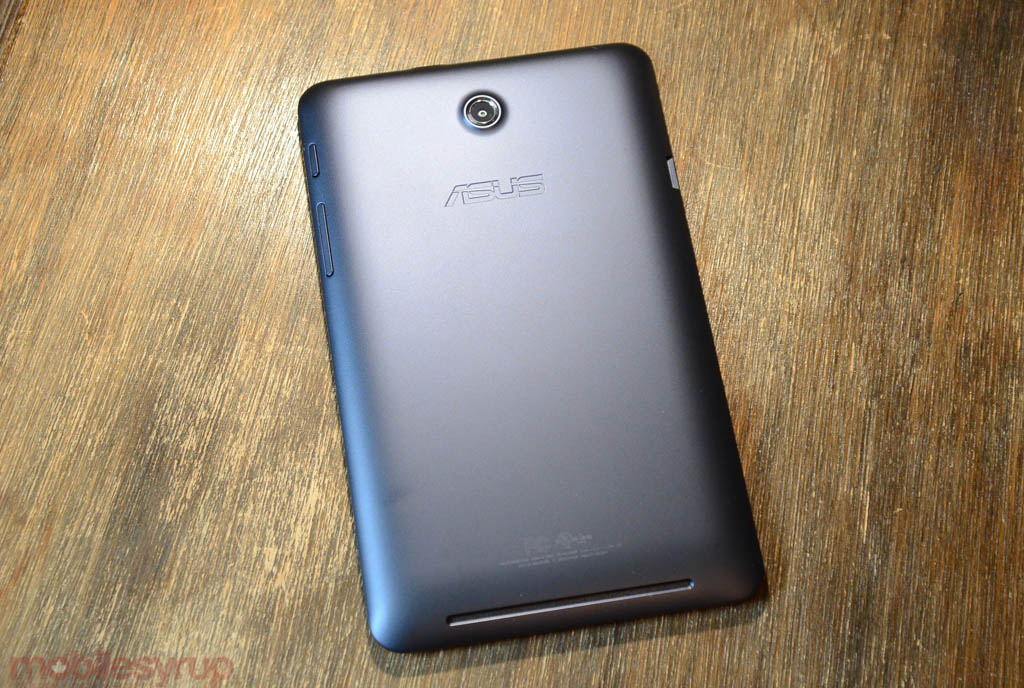 This is a good tablet. That’s what you need to know, first and foremost. Before 2013, a $159 tablet would get you a screen with 16 colours and all the processing power of a digitized snail.

But what would have cost over $100 more a year ago you can buy today for the price of a nice dinner (for two). The MeMo Pad HD is an offshoot of last year’s Nexus 7, which itself was derived from an early $249 Asus prototype. Though it contains a 1.2Ghz quad-core MediaTek proceesor, this is not a slow device, though it stutters in places that most high-end Android tablets don’t. Instead, the MeMo Pad excels at the basics: browsing, reading, listening to music.

The 1280×800 pixel IPS display is surprisingly bright and crisp, with decent viewing angles and a penchant for punchy colours. Where it falls short is in uniformity: the backlights, which are ordinarily invisible to the user, project themselves unevenly under the LCD’s surface, and distract when they should blend in. This isn’t a problem under most circumstances, but it speaks to the shortcuts Asus took in both parts and manufacturing to reach this price point. 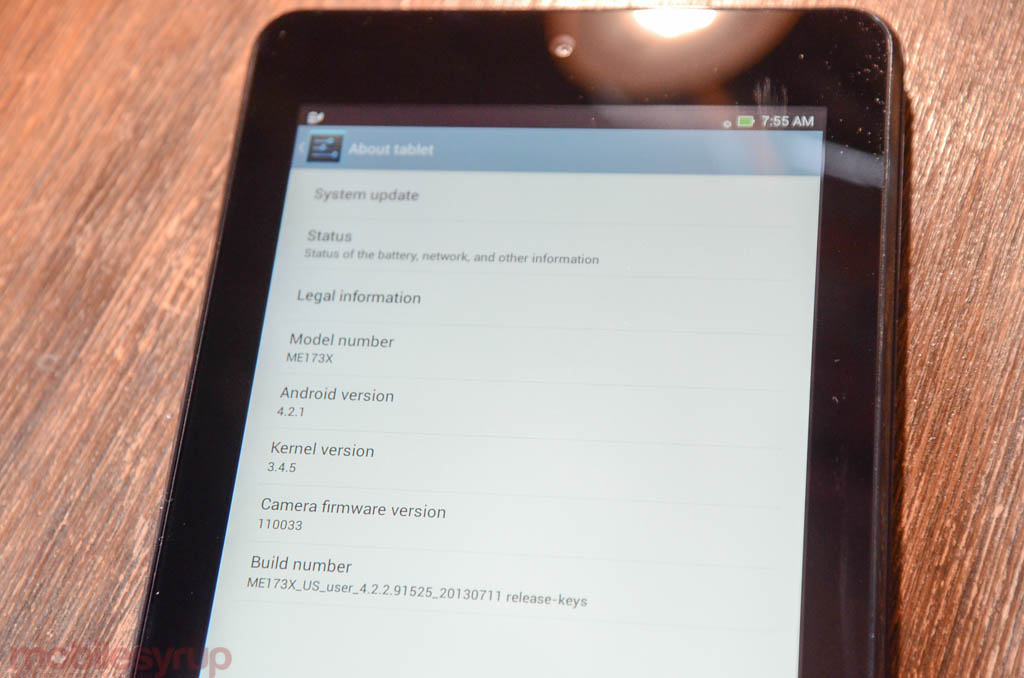 The MeMo Pad is otherwise consummately made, with large bezels surrounding an LCD that lives close to the surface glass covering it. The back, which is rounded and rubbery, feels snug in the hand, and engenders easy one-handed usage. We did see some gaps between the front and back pieces, and the overall quality of the build isn’t up to the standards of the Nexus 7 or even the average Samsung Galaxy Tab, but this is still a far better choice than your average no-name Android slate.

The device runs Android 4.2.1, and comes with 1GB of RAM, 16GB of internal storage, a 5MP rear camera, a 1.2MP front camera, a microSD slot which holds 32GB of additional storage, a batter slated to last 10 hours, and a fairly slim 10.8mm frame. At 302 grams, it’s also lighter than your average 7-inch Android device.

We were immediately surprised at the consistently smooth performance of the mostly-stock Android OS. There were a few stutters here and there, especially when returning to the home screen, but we encountered few noticeable obstructions. 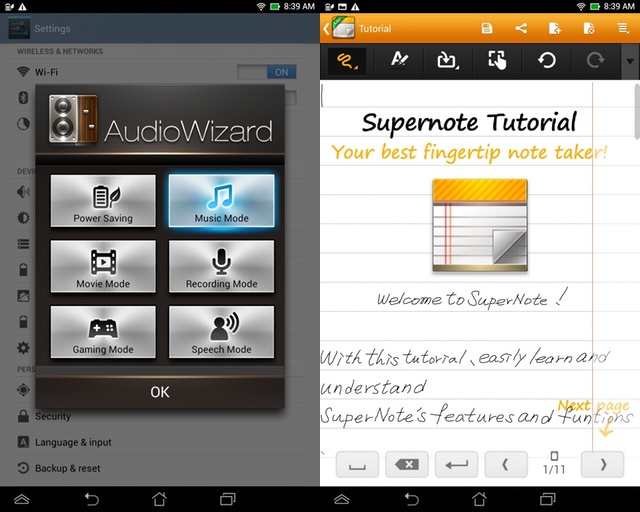 Asus preloads a number of its own services to complement the stock Android experience, some more useful than others. There is an app to take notes with your finger, Supernote, which was a demo and quite unusable; an app to change audio presets, AudioWizard, though I detected no context-specific improvements; an app, BuddyBuzz, to post updates to various social networks, though it paled in comparison to actually using Twitter, Facebook or Google+; an app to store files and photos, Asus Webstorage, though I saw no reason to use it over Google Drive or Dropbox. This was the case with all of the preloaded apps, which on their own seamed useless but overall added to the sense that Asus was adding “value” to the inexpensive device. 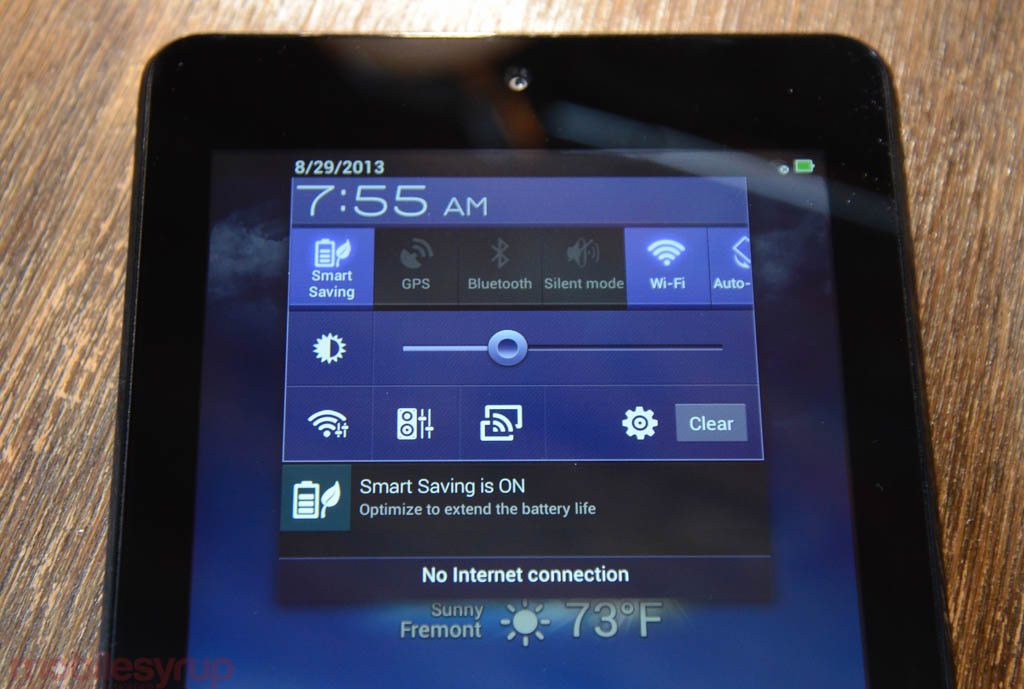 Rather, the MeMo Pad excelled where you’d expect it to: in apps that were either developed for 7-inch tablets, or scale up without negatively affecting the feel. Asus smartly didn’t handicap the device by giving it a small amount of internal storage, either: the base model comes with 16GB of space for movies, music and games, and the microSD card augments that amount. The tablet is more than capable of playing the latest 3D games, though we detected slowdown in modern action titles like Riptide GP2, which has been optimized for the Nvidia’s latest.

Also impressive was the camera quality. Though I don’t recommend ever using a tablet to take photos, the MeMo Tab actually delivers some quick autofocus and decent amounts of detail from the 5MP sensor. The 1.2MP front-facer is wide-angle and decent in a pinch, too. I didn’t test video camera capabilities because…tablet. 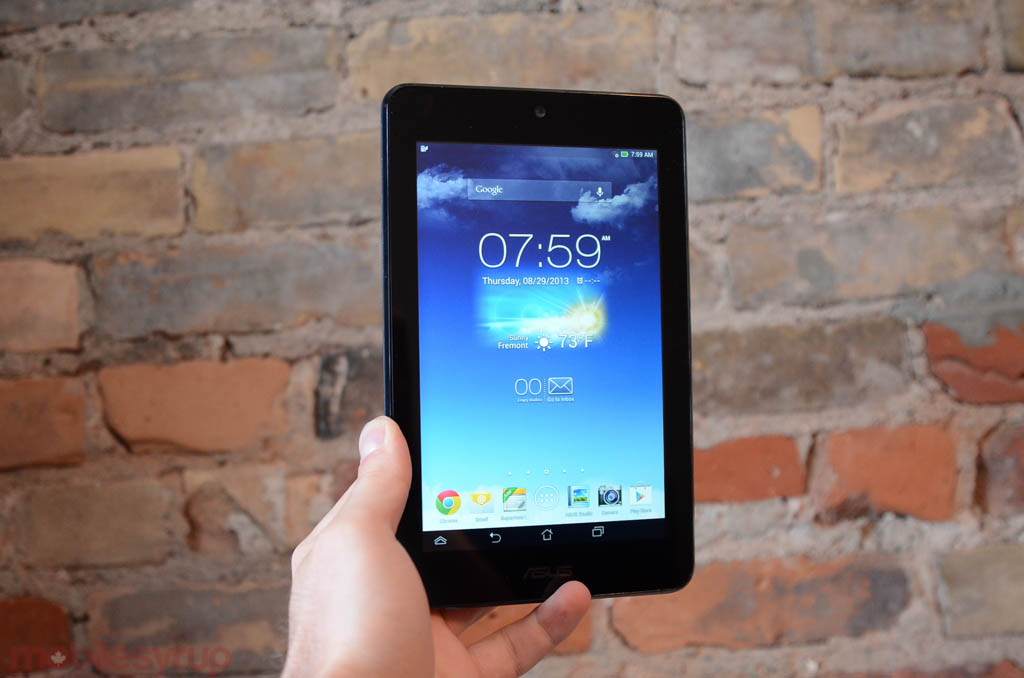 The Asus MeMo Pad HD 7 feels rough around the edges. Literally. The volume and power buttons rattle, and the whole chassis creaks under the weight of its addled-together plastic. The tablet actually feels malleable between two moderately-strong hands, and we worry about the longevity of this purchase.

As with the Nexus 7, and all Android tablets in general, there is a lack of great tablet apps, and the MeMo Pad’s clunky form factor doesn’t help matters. While basic browsing, e-reading and media consumption functions just fine, we wouldn’t recommend using it for more than basic text entry. Apps load relatively slowly, and while we noticed no performance issues per se, this by no means a zippy piece of hardware. MediaTek is printing money by being the SoC supplier to OEMs hawking entry-level products, but the CPU capabilities and GPU fill rate are a fraction of today’s high-end chips.

I also found battery life and sound quality to be disappointing, two obvious tradeoffs when going with a lower-cost tablet. The device did not live up to its 10 hours of uptime, though I did manage to hit seven without issue. Tablet uptime is often not as important as that of a smartphone, but it’s still important that manufacturers hit their self-imposed benchmarks.

Similarly, the MeMo Pad’s stereo speakers disappointed, even when compared to the mono output of the iPad; unlike the new Nexus 7, which delivers true spatial separation and achieves a soundstage when in portrait or landscape, Asus’ less expensive offering offers stereo only in portrait mode, and even then it comes across as mono. 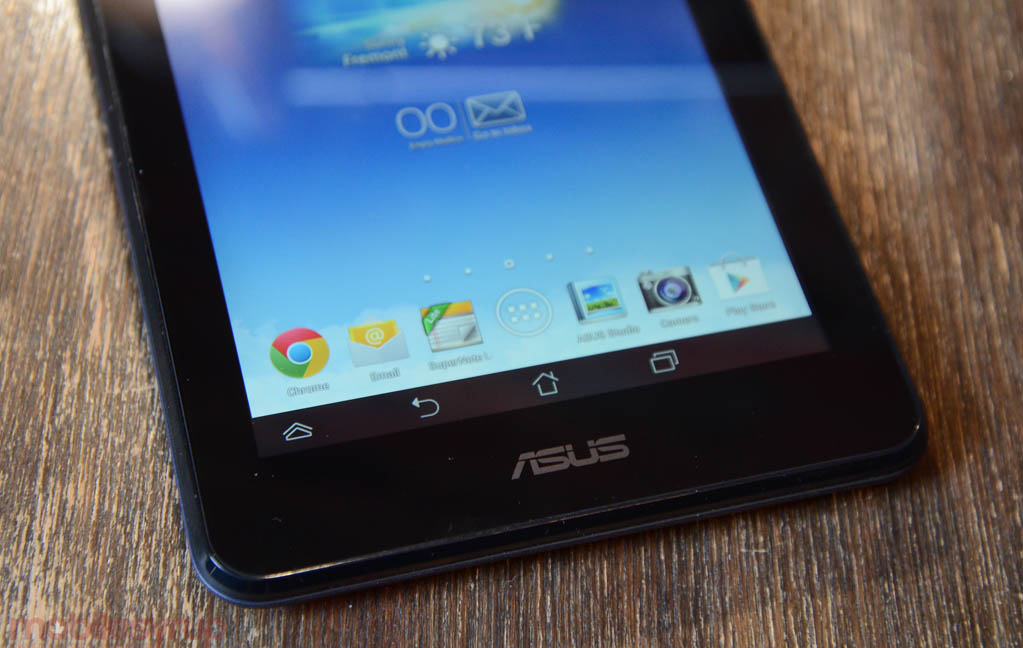 There’s also the question of whether, if you’re investing in an Android tablet at all, whether it’s in your best interest, even for the most basic user, to spend the extra $70 and go with a Nexus 7. The tradeoffs in using the MeMo Pad are significant: poorer screen, slower processor, infrequent updates, lower app compatibility.

If you can live with these sacrifices, the MemoPad is a decent product, and at $159, a great deal.