Bell Q2 2012 results: Subscriber base increases to 7,453,363, boasts about having the largest LTE network in Canada 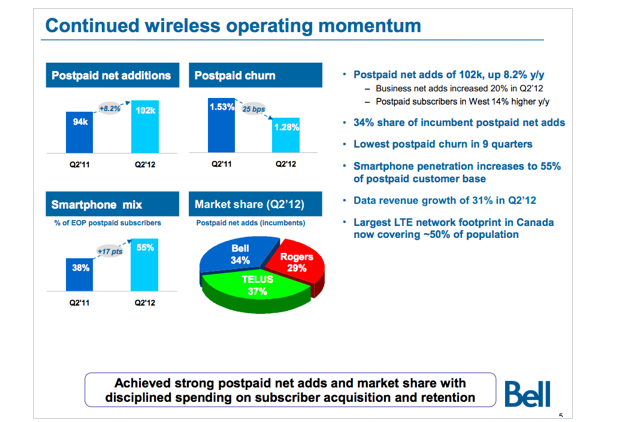 In their press release Bell noted that they “continued on a strong upward trajectory” with wireless revenues coming in at $1,361 million, up 6.7%. Blended ARPU (Average Revenue Per User) was $55.37/month, up 4.5% from $52.99/month in Q2 2011. Data was a big part of this revenue as their smartphone subscriber base dramatically increased, now making up 55% of the total postpaid subs – an increase from 38% in Q2 1011.

Another key takeaway is their LTE network, now claiming to have “the largest next-generation 4G LTE network in Canada, covering more than 49% of Canadians across 23 markets in 7 provinces and territories.” This must drive Rogers a bit crazy as they usually enjoy being in first place. Bell has actively been rolling out their LTE network over the past year and will expand their coverage to reach 20 million Canadians by the end of 2012. No word on how many subscribers are hooked onto their LTE network.

Overall it looks like the race is on for 2nd place. TELUS reported Q2 results last week and stated their subscriber base is sitting at 7,447,000. Bell has just 6,363 more subs. Rogers is still leading the pack with over 9.351 million wireless subscribers.