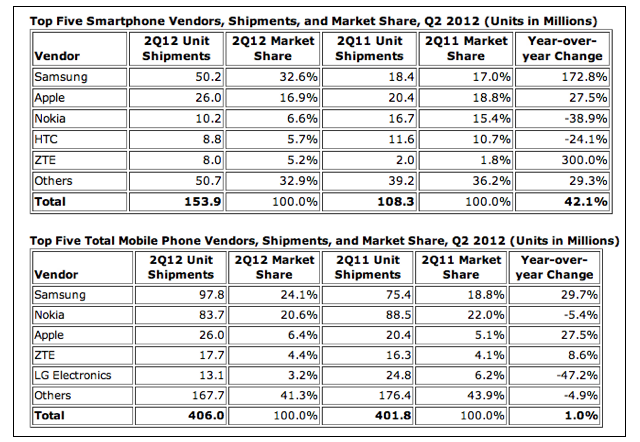 The smartphone race is hot and heavy with all the manufacturers pining for more market share. At the top of the heap is a ongoing battle between Samsung and Apple. Earlier this week Apple reported that they shipped 26 million iPhones in Q2 2012 (16.9% market share), but Samsung has come to the table and completely destroyed this number. They announced late last night that Q2 2012 shipments reached 50.2 million smartphone shipments (32.6% market share), let by the Galaxy S III which has now surpassed the 10 million mark. This makes both Samsung and Apple capture 49.5% of the smartphone market.

Kevin Restivo, senior research analyst with IDC, stated that “Samsung and Apple have quickly become the global smartphone heavyweights though both employ somewhat different approaches to the market. Samsung employs a ‘shotgun’ strategy wherein many models are created that cover a wide range of market segments. Apple, in contrast, offers a small number of high-profile models. While both companies have expanded their geographic presence in pursuit of market share, the two companies will inevitably come into greater conflict as both try to generate additional gains.”

Coming in 3rd spot for Q2 2012 results was Nokia, respectfully hitting 10.2 million smartphone shipments, but dropping to 6.6% of the global market share. In fourth and fifth spot were both HTC and ZTE with a combined market share of 10.9% market share. Sadly, RIM is missing from the top 5 and sinks below the 5% market share mark.