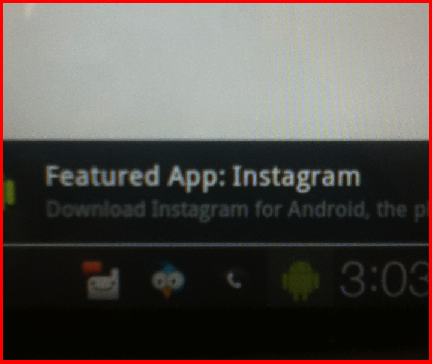 According to a screenshot captured from a promotional notification on a Samsung Galaxy Tab 10.1, Instagram for Android may only be days away from its much-awaited debut.

The app, which has been confirmed in development for several months, has come to symbolize the app quality divide between iOS and Android, and has in many ways captured the imagination of the proliferation Android community. We even showcased three Instagram alternatives for Google’s platform. Last we checked, the photo sharing social network was closing in on 20 million users.

While the screenshot could be faked, or a false alarm, it was likely sent out prematurely. Nevertheless, it could indicate that Instagram is only days away from its debut, and may even be tablet-compatible, though that is highly unlikely for a team as disciplined as this one.