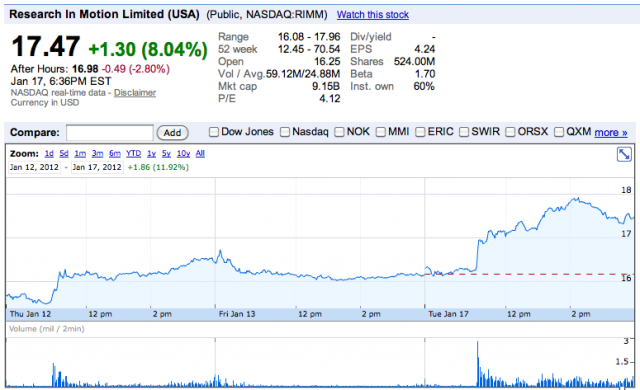 Over the past couple weeks various reports surfaced that Waterloo-based RIM was thinking about licensing their BlackBerry 10 OS to companies such as Samsung or HTC. RIM, and others, declined to comment on the rumour… but here’s another one to add to the mix. Over at BGR, trusted sources say that RIM is leaning towards selling a specific part of the business, or even the entire company, with the hopes of scooping up between $12 billion to $15 billion. Apparently RIM co-CEO Jim Balsillie “is going hard after Samsung”. No other details are given, but the possible reasons Samsung is interested in RIM is because of their BlackBerry Messenger service and various enterprise features. Not mentioned in the report is the patents that RIM holds, specifically Nortel. Personally, I can’t see it happening, but hey, mobile is a crazy space these days and you never know.

If Samsung dished out $12 billion for RIM, they would take the 75 million BlackBerry users and rise way above Nokia and become the number 1 mobile manufacturer in the world. What do you think… will Samsung gobble up RIM?

Update: A new report from Reuters says that Samsung is not interested in purchasing RIM. Samsung spokesman James Chung said “We haven’t considered acquiring the firm and are not interested in (buying RIM)”. RIM’s stock increased just over 8% on the news today, but unfortunately after hours trading is down over 3%.