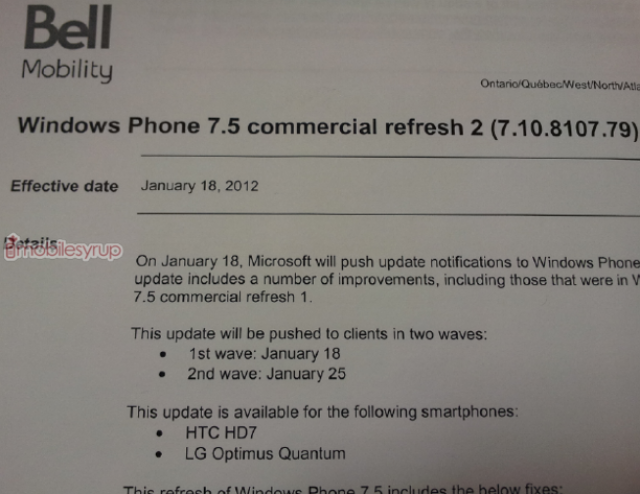 Microsoft will be starting to officially roll out Windows Phone 7 build 7.10.8107.79 tomorrow. This update will most likely hit all Windows Phone owners in Canada, but the above internal document reveals that Bell will deploy a 2-stage rollout for the LG Optimus Quantum and the HTC HD7. The “1st wave” will start on January 18th, followed by the “2nd wave” on January 25th. Curious what fixes this will bring… here’s the complete list:

– On-screen keyboard. Fixes an issue to prevent the keyboard from disappearing during typing.

– Location. Fixes a location access issue. With this fix, the Me feature in the People Hub sends anonymous information about nearby Wi-Fi access points and cell towers to Microsoft only if you agree to allow the Check In function to access and use location information.

– Email threads. Fixes an email issue related to Microsoft Exchange Server 2003. With this fix, when you reply to or forward a message, the original message is now included in your response.

– Voicemail. Fixes a voicemail notification display issue that occurs on some European and Asian networks under certain conditions.