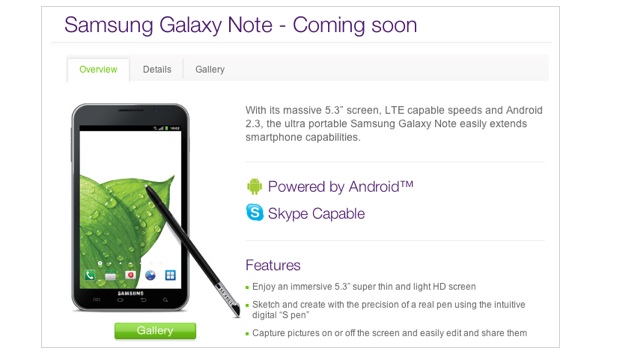 At CES this year the Samsung Galaxy Note was confirmed to arrive at TELUS, no word on price or a specific date, but we’re hearing the mid-February time frame. The Note will also be arriving at Bell and Rogers, too. However, it’s TELUS that doesn’t mess around and are first to market when it comes to placing the familiar “coming soon” on their site. TELUS notes that “With its massive 5.3” screen, LTE capable speeds and Android 2.3, the ultra portable Samsung Galaxy Note easily extends smartphone capabilities”.

The Note will most likely be one of TELUS’ first LTE-capable devices, along with the Samsung Galaxy Tab 8.9 LTE. A press release a few days ago stated that their LTE network will launch “later this quarter”.

Check it here at TELUS
(Thanks Denver!)