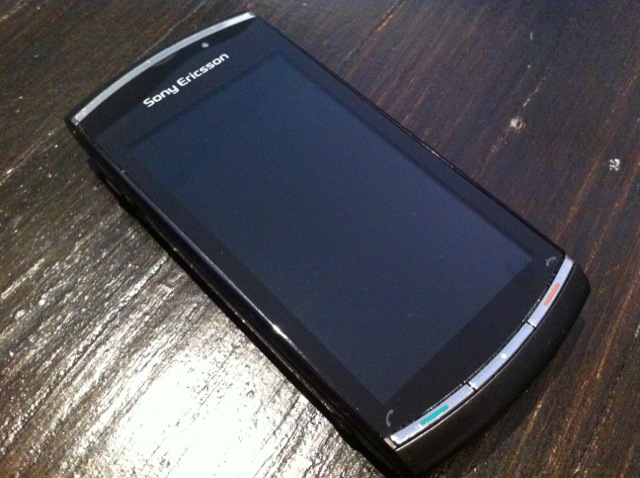 Sony recently released an updated version of their initial Ericsson Vivaz, now dubbed the Vivaz Pro, which sports a 3.2” TFT resistive touchscreen, with a resolution of 360 x 640, and a full slide out, QWERTY keyboard. The Vivaz Pro is approximately 109mm (tall) by 52mm (wide) by 15mm (thick) and weighs around 117g.

AESTHETICS
When I first picked up the Vivaz Pro, I noticed that it felt very simple and lacked a high quality feel to it, this is mainly due to its plastic housing; however the curved shape of the device fit nicely in the palm of my hand.

The front of the Vivaz Pro houses a 3.2” resistive touchscreen, with three plastic buttons located underneath (open call, menu, and end call). The right side of the device has volume/zoom rockers, as well as individual camera and camcorder buttons. The left side of the device has a microUSB port for charging/PC connectivity and a 3.5mm headphone jack. It should be noted that the top and bottom of the device do not house any features, due to the curved design of the casing.
SIDE NOTE: It would have been nice if the headphone jack was located in a more convenient location (such as the top), since it makes your headphone cord bend awkwardly when listening to music with phone in your pocket. 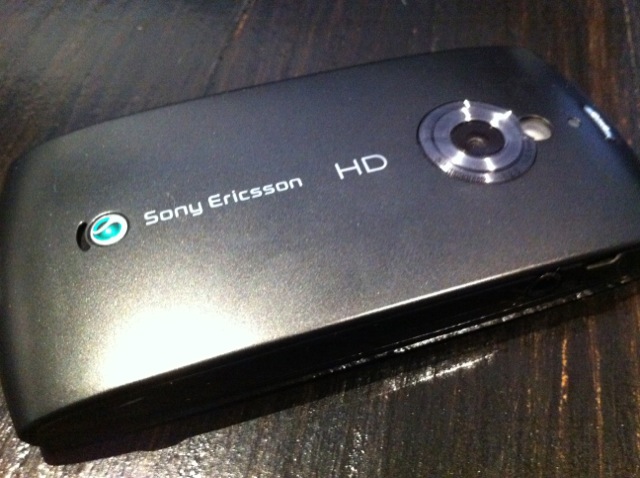 The back of the Vivaz Pro reveals a 5.1MP camera (downgrade from 8.0MP camera on original Vivaz), as well as a small power/lock button. Removing the back cover reveals a microSD port with up to 32GB support (2GB microSD card included). The Vivaz Pro is powered by a 1200 mAh Li-Po battery, which advertises approximately 310 minutes of talk time, and/or 440 hours of standby time. The device also has a built-in accelerometer sensor for UI auto-rotate, allowing users to toggle the display between portrait and landscape orientations.

SIDE NOTE: The size and location of the power/lock button is not practical or common and I would have liked to see the button placed on top of the device, or combined with the “END CALL” button. 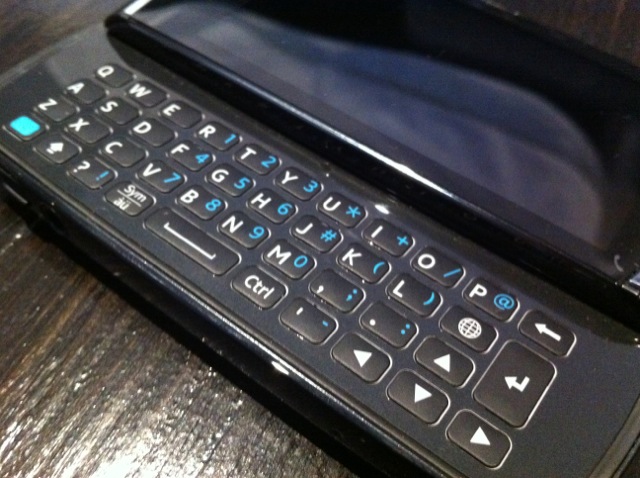 Sliding the screen up will reveal a full, QWERTY keyboard, with rubberized keys that are slightly raised. I found the sliding mechanism very stable and durable, and I had no concerns about wearing out the mechanism or breaking the keyboard off the screen. I also found that the keys were adequately spaced apart and sized, so that any user could type quickly and efficiently when making phone calls, composing text messages, emails, etc.

PERFORMANCE
The Sony Ericsson is powered by a 720MHz processor, with 70MB internal memory, and comes preloaded with Symbian Series 60, 5th Edition. This device supports HSPDA 900 / 2100 and HSPDA 850 / 1900 / 2100 MHz networks, and advertises network speeds of up to 7.20 Mbps (download) and 2.00 Mbps (upload). The phone is powered by a 1200mAh Li-Po battery, with up to 310 minutes of talk time, and/or 440 hours of standby time. The Vivaz Pro supports GPS, +AGPS, and Bluetooth 2.1, while housing a WiFi 802.11 b/g card for WiFi support. It should be noted that most new smartphones ship with wireless “N” capability for increased speeds/connectivity and the lack of support on this device is disappointing.

The call quality of the Vivaz Pro was satisfactory, but could have been improved with a better microphone. The sound through the speaker was crisp and clear, but often times, callers complained that they could not hear me clearly. The phone interface was very user friendly, and the large buttons for dialing allowed for quick phone calls, without having to slide out the keyboard.
SIDE NOTE: There is no proximity sensor on the Vivaz Pro, which would have been nice, in order to preserve some battery life by turning the screen off during calls. 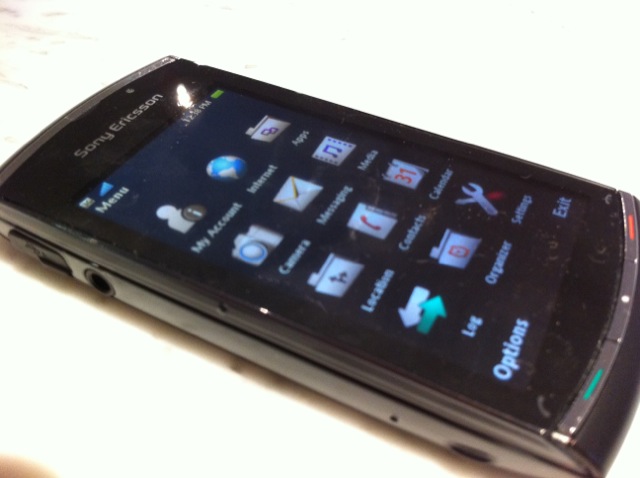 The touchscreen on this device was somewhat responsive and accurate, but at times, I found myself clicking the screen multiple times, trying to navigate through the various menus. I found greater success when using the tips of my finger/fingernail for increased accuracy. This is very important when trying to use the small scroll bars while navigating through various menus.
SIDE NOTE: The OS made the touchscreen experience very unpleasant at times, since some menus required a double tap to open, while others only needed a single tap. 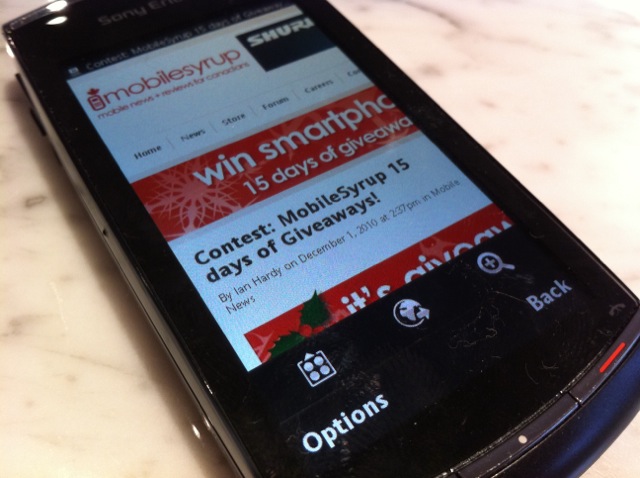 The web browser was very slow and outdated. The resistive touchscreen made it almost impossible to click links without having to zoom right into the link. There is a full screen mode; however it is not possible to use the navigation buttons while in this mode. Also, there is no text re-flow capability, so when you zoom in to read text, you will have to pan over or zoom out to continue reading, since the browser does not automatically adjust text to fit the screen. One of the positive features of this browser is the Flash Lite support, which will allow you to play embedded video/media such as YouTube.

SIDE NOTE: Although the WiFi, Bluetooth and Internet connectivity performed very well, the phone seemed to become confused when multiple connections were available, as it continually asked the user for their choice of connection (Fido Browser, WiFi Browser, Bluetooth, etc.)

One area where the Vivaz Pro does thrive is in the media department. The 5.1MP camera took some stunning pictures, and features such as panorama mode, macro, smile and continuous shot allowed for many different angles/customization. I also liked that there was a separate shortcut on the side of the phone for video recording and would like to see this on more devices in the future. Although the Vivaz Pro advertises video recording of up to 720p HD, some recorded video was not as crisp and clear as expected. Here’s a pic and a video that shows the high quality: 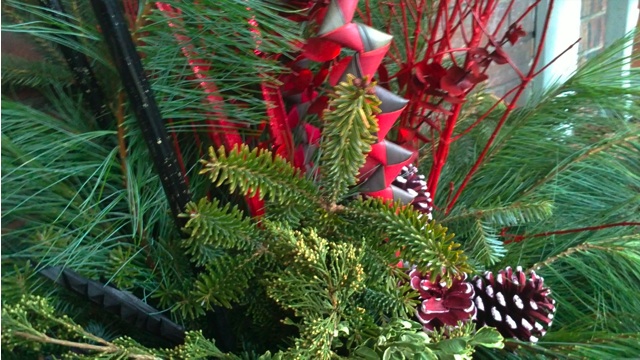 The battery for this phone performed very well for its size, and I was able to use the phone for two full days before recharging (light calls, text messaging, browsing). Like all phones, I did notice that web browsing drastically decreased the battery life, and I also wonder how much battery life could have been gained from utilizing a proximity sensor while making phone calls.

SOFTWARE
The biggest complaint I have with this phone is its OS, however I’ve had bad experiences with Symbian in the past and have never been a fan (so take this section with a grain of salt). Symbian S60 feels slows and outdated, especially when compared to newer devices on the marker (iOS, Android, Windows 7, etc.).

The main screen is composed of five separate home screens that can be toggled through using the shortcuts at the top of the screen. However, only one of those home screens is customizable, while the rest are permanent (Twitter, Favourites, Plain Screen, and Media). Pressing the “End Call” key did bring up a small menu at the bottom of the screen for shortcuts to Music, Phone, Messages, and Search. Another annoying feature was the constant running of some of the menu options. Sometimes when I navigated to and from various menu options (such as messaging), I noticed that a small green circle would appear near the icon, signaling it was still running.

If you are not a fan of the physical keyboard, a virtual keyboard is present, which I found to be quite responsive. Although it may seem that the keys are not spaced far enough apart on the screen, my typing was quite accurate and I did not notice much lag between input and output.

CONCLUSION
Overall, the Sony Ericsson Vivaz Pro is a strong and durable device that gives off an invaluable feeling from its housing and software. The slide out, QWERTY keyboard is well designed and ergonomic, making messaging experiences quite enjoyable. The sliding mechanism on this device is also well designed and alleviates any fears of wear and tear. The main downside to this device is the software, as Symbian hindered the touchscreen accuracy and performance during Internet browsing and while navigating through menus. This device is very affordable, and I would recommend it to beginner cell phone users, looking for a “messaging-friendly” phone. Teenagers that find themselves constantly texting and taking pictures/video would also find this phone as a suitable option.

The Song Ericsson Vivaz Pro is currently available with Fido under the following pricing structure:
• $275.00 (no term contract)
• $75.00 (2 year contract)