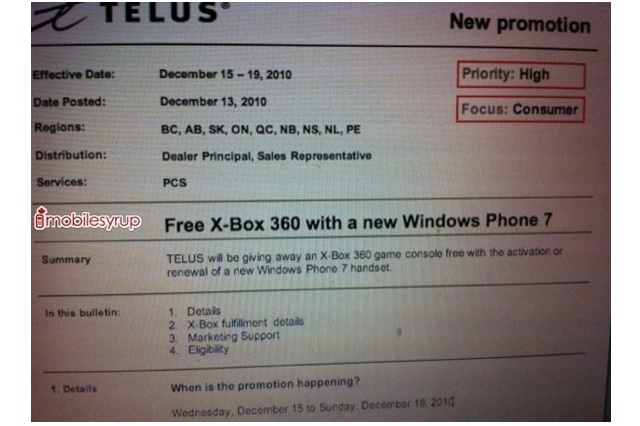 When TELUS launched their Windows Phone 7 devices (HTC Surround & LG Optimus 7) to entice buyers they offered a free XBOX 360. Sounds good but there was only about 100 consoles and was only available at the Toronto flagship location.

Over a month has passed and the festive season has come forth over at TELUS. The reason: free XBOX 360 consoles for all who purchase a Windows Phone 7 device. According to the internal doc we received it states that “TELUS will be giving away an X-Box 360 game console free with the activation or renewal of a new Windows Phone 7 handset”. So this is not just for new customers or for those located in Toronto… this time it’s all TELUS locations across Canada. The promo will start on December 15th until the 19th and the doc says the XBOX is not located in stores but will be shipped to you. TELUS confirms that “All eligible clients who activate/renew a Windows Phone 7 device during the promotion period will be shipped an X-Box”. Also, you must “activate or renew on 3 year contract term”.

Good deal. Certainly the best WP7 promo around!
(Thanks tipster!)