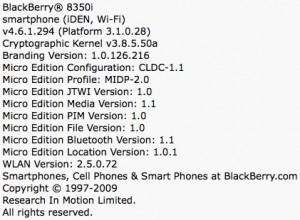 If you bought the TELUS BlackBerry Curve 8350i when it first launched you might have been a bit frustrated with the text messaging as is was unable to see who the sender was when incoming messages arrived.

However, Piper975 in our forums has informed us that an update (OS version 4.6.1.294) has been made available in the download manager that fixes the issue. He states “it does fix the texting issue and you now know who the texts are from and can reply to them”