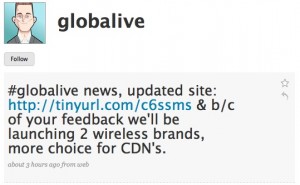 Globalive is set to enter the Canadian wireless space later this year and even though we got incredibly thrilled by that so-called leaked marketing strategy, it turned out to be a “fake”. Some say it was a move to gain customer insight.

As it turns out, one thing that Globalive is great at doing is gaining feedback. They recently re-launched WirelessSoapbox and today we found on their Twitter page that they will be launching a couple brands. The Tweet says “…b/c of your feedback we’ll be launching 2 wireless brands, more choice for CDN’s.”

We can only guess that this will be similar to the other carriers where Rogers has Fido, Bell has Solo and Virgin, and TELUS has the Koodo Mobile Brand. Expect Globalive to come to market looking to take away some serious business.