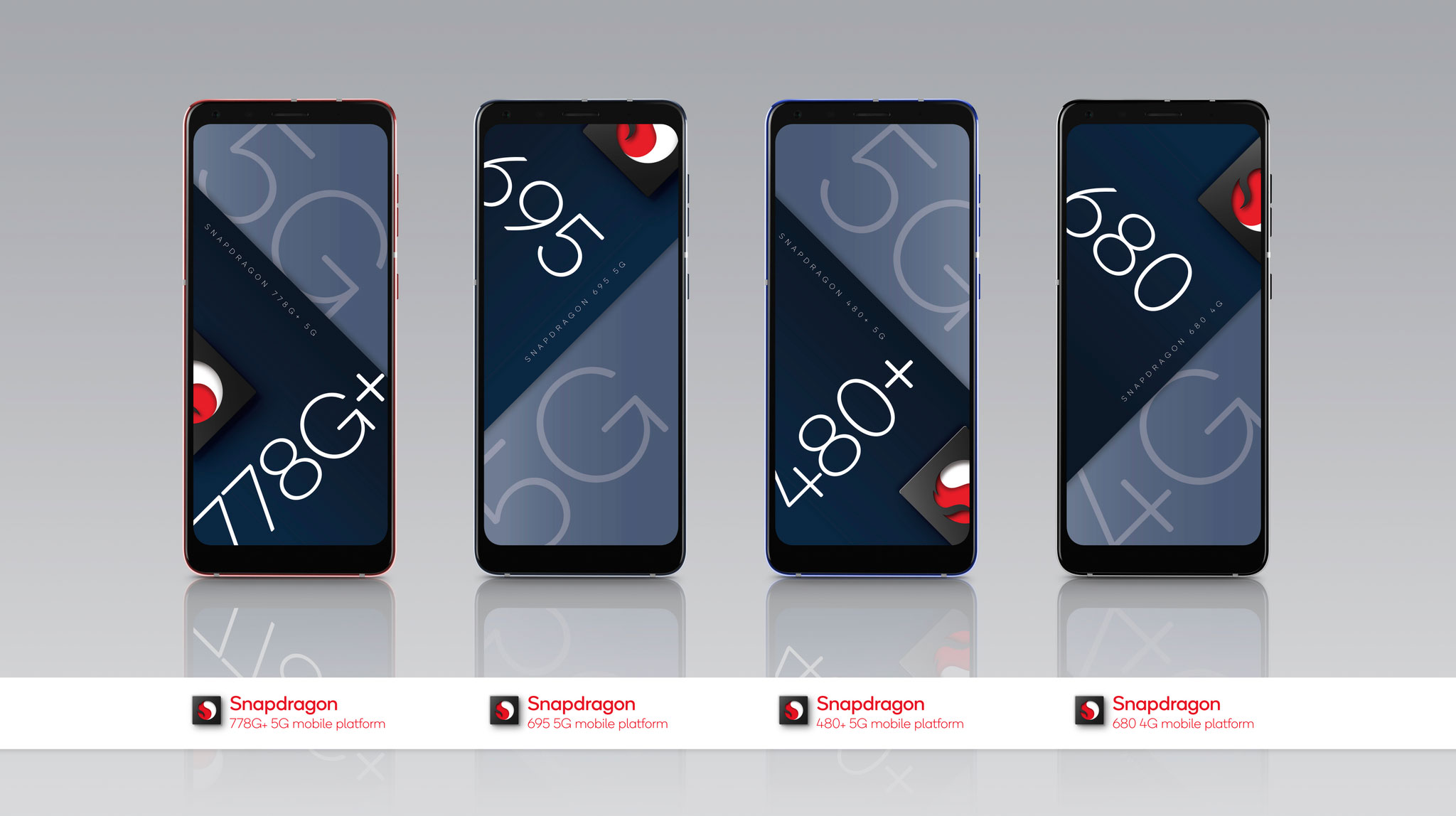 Qualcomm is introducing four new mobile platforms in its Snapdragon 7, 6 and 4 series that it says will increase performance across high-, mid-, and entry-tier smartphones.

According to Qualcomm, the new 5G and 4G mobile platforms boost performance and capabilities, giving OEMs alternatives to fulfil demand in a time of massive chip shortage.

The successor to the 778G, the 778G Plus takes its Kyro 670 CPU and Adreno 642L GPU performance one step further with the 6th-gen Qualcomm AI engine. It includes a Snapdragon X53 5G Modem-RF System that supports both mmWave and Sub-6GHz 5G networks in SA and NSA modes, TDD, FDD and with Dynamic Spectrum Sharing (DSS).

The platform also includes an ultra-efficient 6nm process for smooth performance that conserves battery along with ‘Quick Charge 4+’ for fast charging.

On the camera side of things, the 778G Plus uses the Qualcomm Spectra 570L Image Signal Processor, which is capable of speeds up to 2 gigapixels per second, allowing it to capture 4K video, up to 192 megapixel photos, slow-mo video capture at 720p @ 240 FPS and enhanced AI-based auto-focus and auto-exposure.

The mid-tier Snapdragon 695 5G also supports both mmWave and Sub-6GHz 5G networks thanks to the Snapdragon X51 5G Modem-RF System. According to Qualcomm, the new platform, when compared to the Snapdragon 690, has up to 30 percent faster graphic rendering with the Adreno 619 GPU and 15 percent better CPU performance with the Kryo 660 CPU, allowing for immersive gaming, greater productivity and high-end photo and video capturing.

The platform features a Qualcomm Kryo 460 CPU that delivers speeds of up to 2.2 GHz along with Qualcomm’s Adreno 619 GPU, which the company says is the fastest in the 4-series. 480 Plus also includes an ultra-efficient 8nm process for smooth performance and low battery usage, along with ‘Quick Charge 4+’ for fast charging.

The 680 is the only new 4G platform unveiled by Qualcomm. The company says the platform was designed for extensive multimedia playback, with unrivalled efficiency and long-lasting power. To put things in perspective, the platform supports Quick Charge 3.0 that can charge your device up to 50 percent in just 30 minutes which goes hand-in-hand with the Kryo 265 CPU designed for robust computing without draining power.

The platform can support devices with FHD+ (1080 x 2520) and HD+ (900 x 1600) screens at 90Hz. It features a Snapdragon X11 LTE Modem for reliable 4G LTE connectivity for entertainment and gaming. On the camera side, the 680 4G uses a Qualcomm Spectra 346 Image Signal Processor with up to 64-megapixel photo captures and can accommodate a 13+13+5 megapixel triple camera setup.