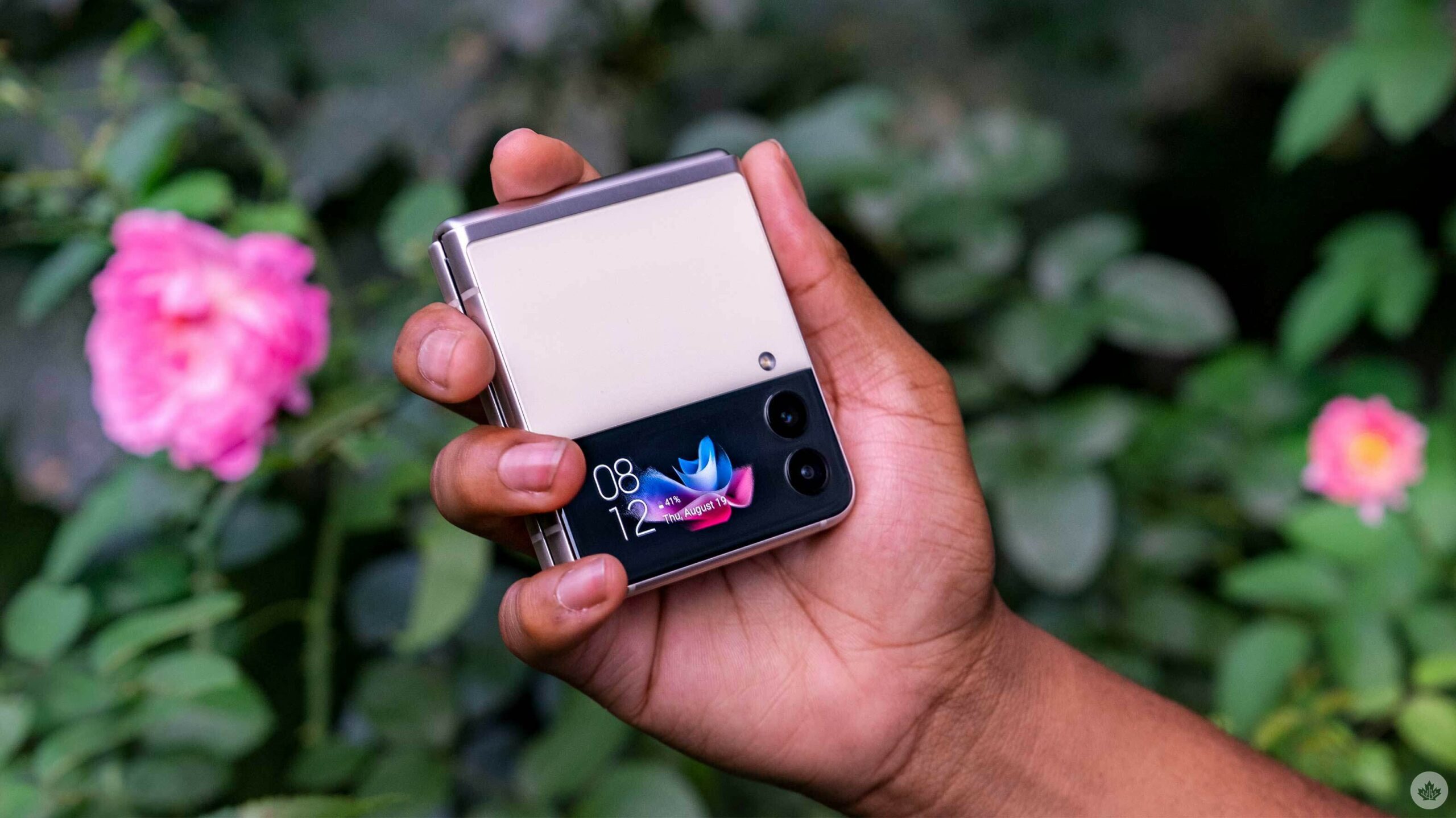 The Galaxy Z Flip 3, one of Samsung’s latest flagship smartphones, offers a foldable display that folds in like a clamshell, similar to the flip phones of the past.

Unlike Samsung’s other foldable smartphones, the Z Flip 3 costs far less, offers top-of-the-line specs and features a great-feeling glass display. However, during my brief time with the foldable device, I also noted that its battery life isn’t great.

Over the past few weeks, I’ve put the smartphone through its paces by using it as my day-to-day device, including playing mobile games, taking photos and just flipping it shut whenever I’m bored (this is a lot of fun, trust me).

I want to make one thing clear though — while Z Flip 3 likely isn’t for everyone, it’s by far the most accessible foldable on the Canadian market.

To flip or to fold 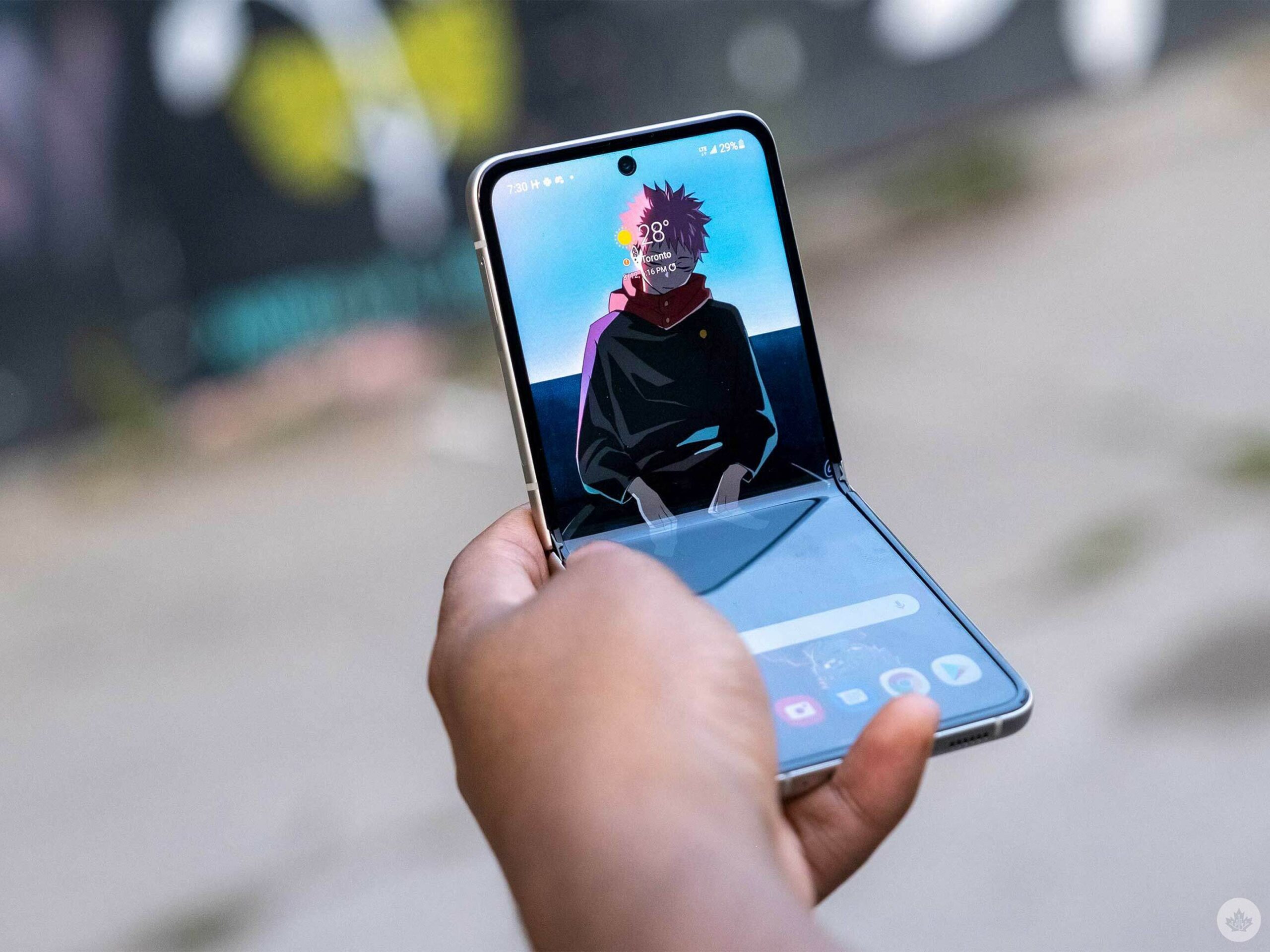 MobileSyrup’s managing editor Patrick O’Rourke recently wrote a story about the different folding methods used by smartphones in an attempt to figure out which is better: the clamshell fold (Z Flip 3 and Razr) or the book fold (Z Fold 2 and 3).

Right off the top, I’ll say that while the book-style folding method is more useful, the Z Flip 3’s flip folding does offer several benefits.

For instance, being able to flick your phone shut is endlessly fun, and using the Flip 3’s 1.9-inch cover screen is more useful than I expected. I also like that I can see previews of my notifications, quickly pause music or skip songs, and take pictures, all from its easily accessible front display.

This front screen is far improved compared to the predecessor’s 1.1-inch Cover Screen, which I typically avoided using because it was too small.

Look at my flip phone 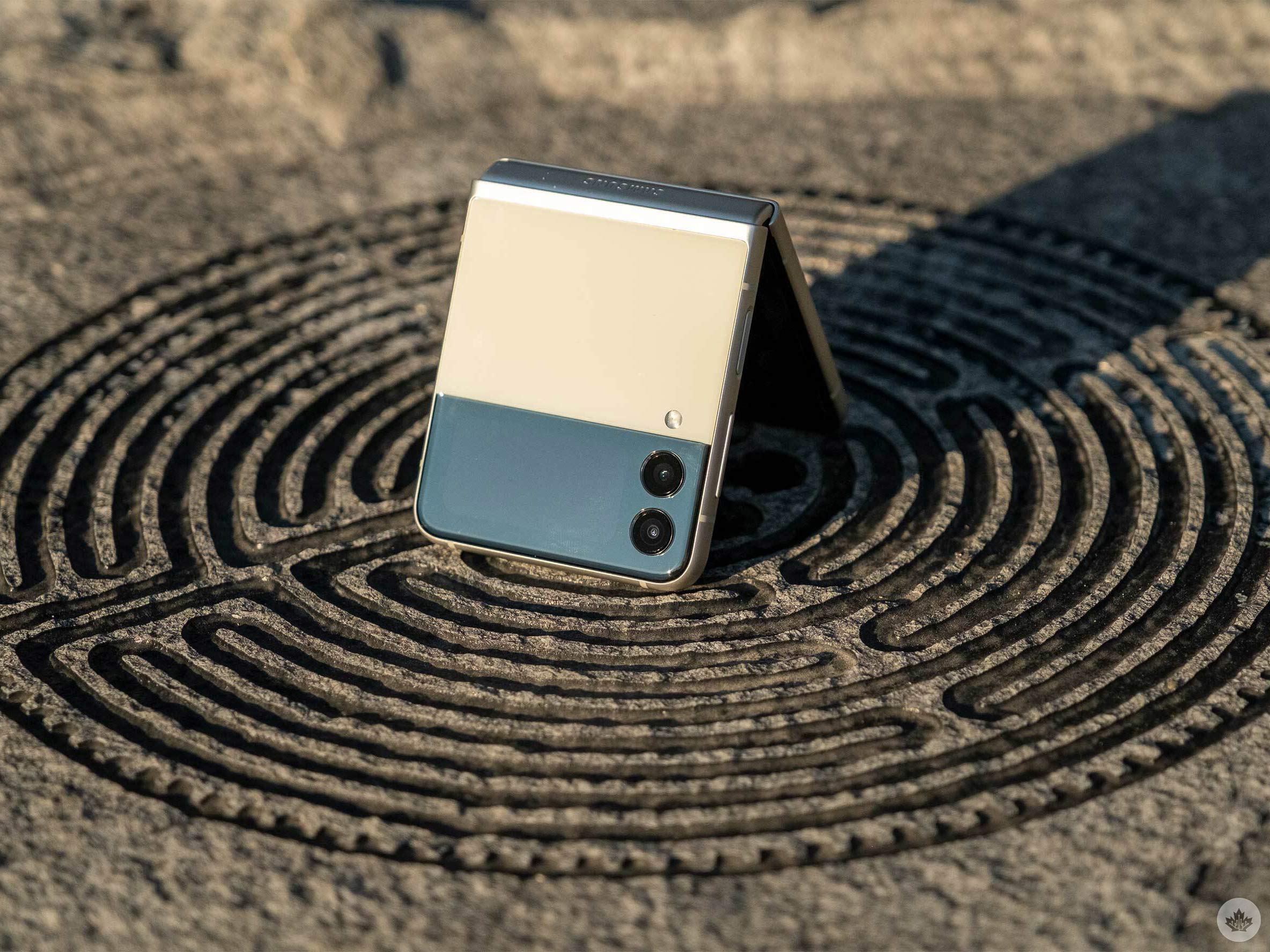 Dimensions-wise, the Z Flip 3 is slightly shorter, smaller and thinner than the Z Flip 5G, but the device weighs the same.

Interestingly, when I first got my hands on the Z Flip 3, I assumed it was substantially smaller and lighter than its predecessor, but evidently, that’s not the case. The Z Flip 3 and Z Flip 5G are actually a lot closer in size and the millimetre difference is negligible.

Compared to the Z Flip 5G, the Z Flip 3 features a glossy front and rear, which I found makes it feel decidedly less premium. Last year’s model offered a matte finish that prevents unsightly fingerprints; the new glossy front and back is a fingerprint magnet and not a design choice most flagship smartphones go with anymore. 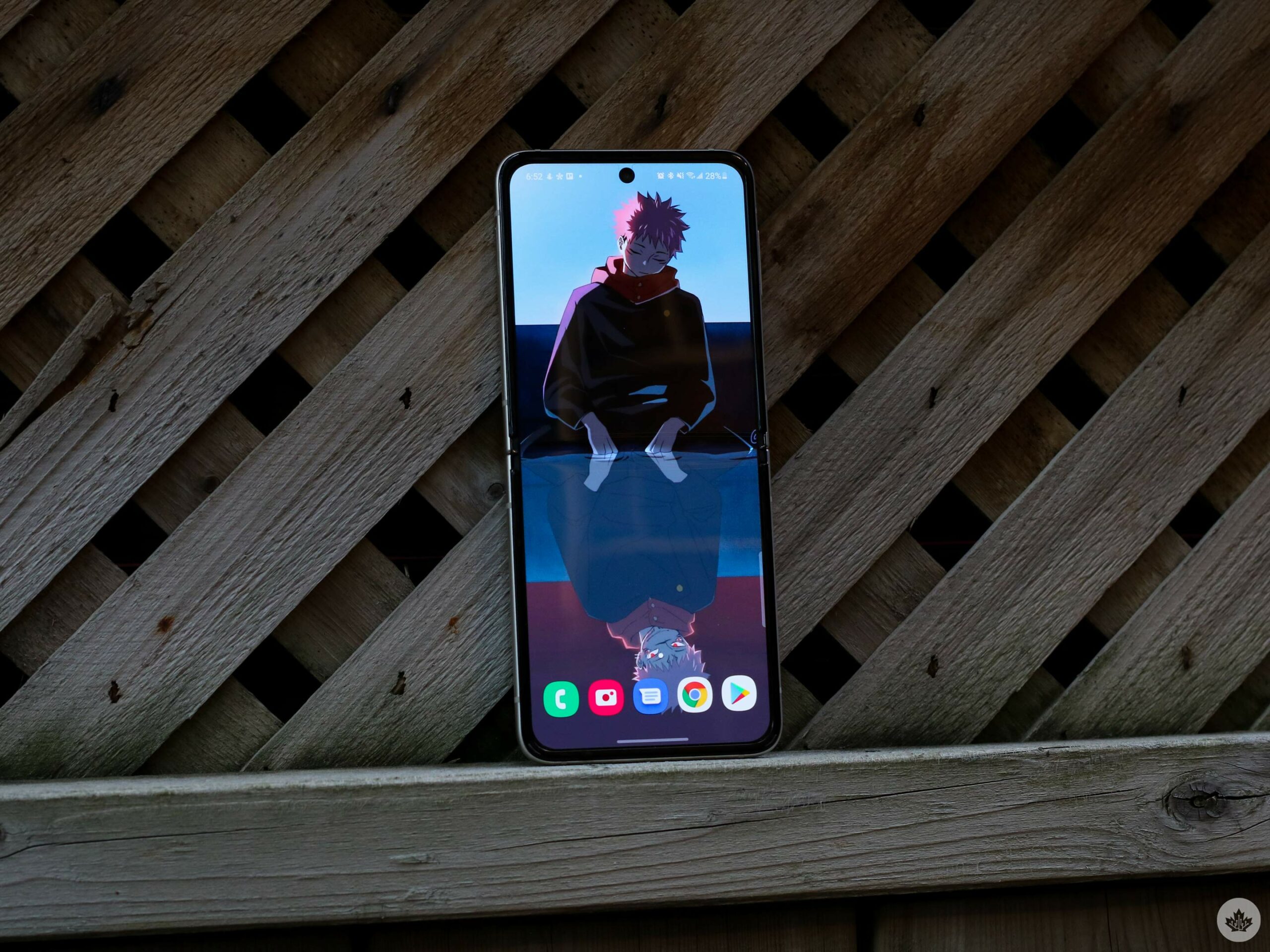 On top of that, Samsung added what it calls an ‘Armor Aluminum’ frame to the foldable device. On my ‘Cream’ Z Flip 3, the frame is an off-silver colour, and you can see it prominently around the handset and the device’s hinge. Samsung says this feature aims to make the smartphone’s folding mechanism stronger and more durable, but to me, it makes it look cheaper.

It’s worth noting this could be pretty subjective. For example, my co-worker Bradley Bennett disagrees with me and feels that the Z Flip 3 looks decidedly more high-end than the Z Flip 5G.

The crease says it all 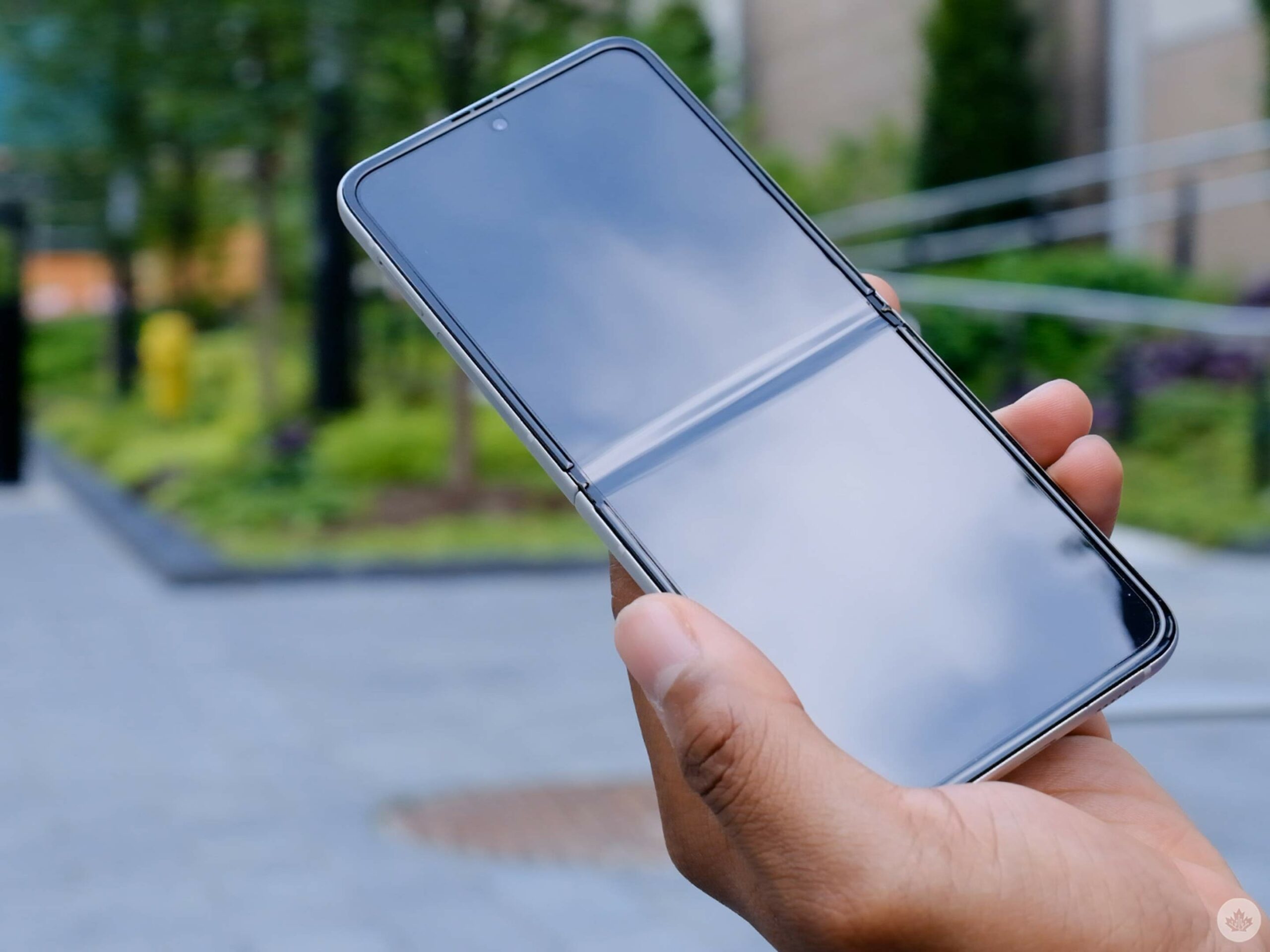 Flipping to the front, the Z Flip 3 features Corning Gorilla Glass Victus and offers a new protective film made of stretchable plastic that Samsung claims improves the durability of the main screen by 80 percent. It’s important to note that Samsung also told me that this film can’t be removed. With that in mind, I still found the display had a ‘glassier’ feel compared to its predecessor’s rubber-feeling screen.

It’s also worth mentioning that the Galaxy Z Flip 3 is IPX8 waterproof, an impressive feat on Samsung’s part given the phone’s display is foldable. While outside in the rain the other day, I slid the Z Flip out of my pocket to text a friend and didn’t have to worry about damaging the handset, which is something I’d never consider doing with the Z Fold 2 or Z Flip 5G.

“Yes, the crease is still present and very visible, and eventually, you do get used to it.”

While we’re on the display, the Z Flip 3 features a 6.7-inch main panel with a Dynamic Foldable 2X 1080 x 2640 pixel resolution screen and an adaptive 120Hz refresh rate. During my time with the phone, I always ran the Z Flip 3’s display with adaptive 120Hz turned on. The feature can scale down the device’s refresh rate to 11Hz when doing something static, like texting or reading, or push it to 120Hz while scrolling or gaming.

The viewing experience on the device is great, and I enjoy watching YouTube and Netflix videos on the Z Flip 3. While its screen doesn’t offer the highest resolution out there, it’s definitely good enough for most people. It’s also worth mentioning that the Galaxy Z Flip 3 features a longer display, and when you fully expand videos on YouTube, the stretched crop looks very odd. 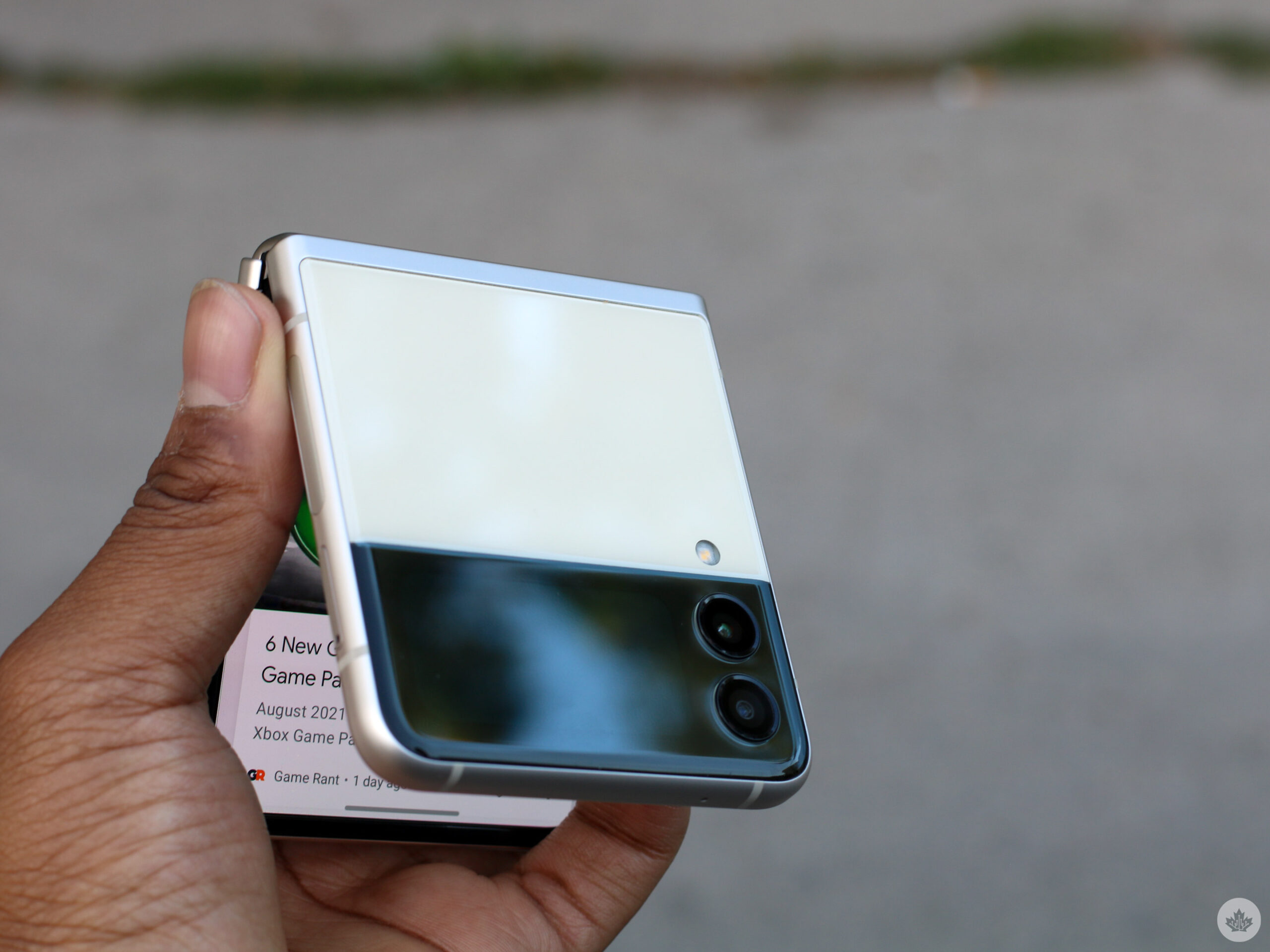 Just because the Z Flip 3 feels more like a regular smartphone, it doesn’t mean Samsung managed to get rid of its display crease.

Yes, the crease is still present and very visible, but eventually, you do get used to it. Every once in a while, though, you’ll slide your finger across the middle of the handset and feel the crease, reminding you that it’s there.

On the front, the Z Flip 3 features an ‘Infinity-O’ selfie shooter placed in the top centre of the device, along with small bezels running around the display that feel somewhat “mid-range.”

Flipping the phone to the rear, there’s the already mentioned glossy Gorilla Glass Victus and a black top, giving the Flip 3 a dual-tone look. This is also where the two 12-megapixel cameras and a dual-LED flash are located. Finally, the smartphone features a volume rocker and a power button that doubles as a fingerprint scanner on the right side. 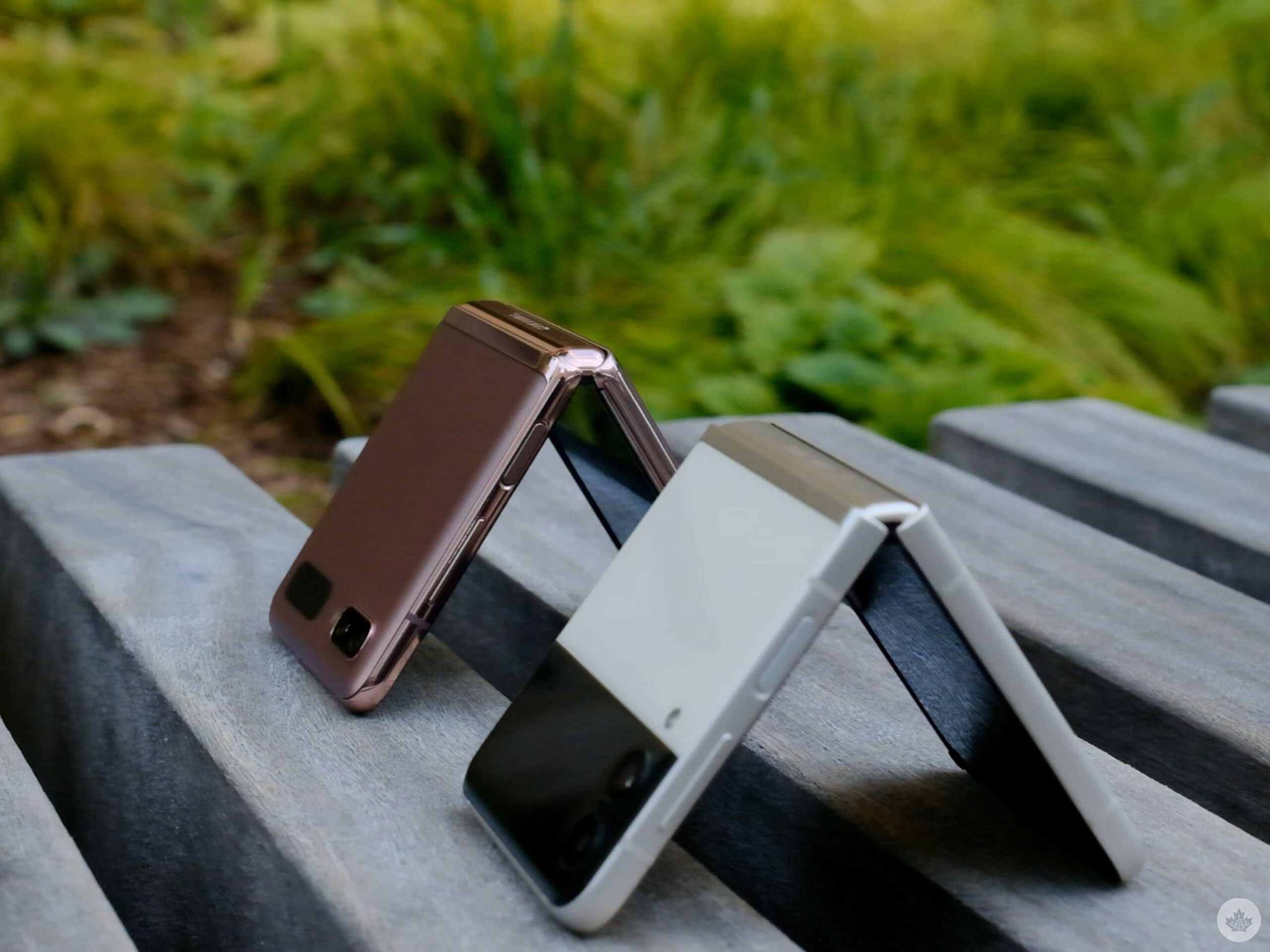 The Z Flip 3 features a Qualcomm Snapdragon 888 processor, 8GB of RAM, and up to 256GB of storage. The smartphone feels quick and the processor does a good job of keeping up with what I need it to do. This includes taking several pictures, using Google Docs to write this review, playing games like League of Legends: Wild Rift, using tons of social networking apps, and more.

While playing Wild Rift, the handset did get a tad warm, but I wouldn’t say that it got overly hot. Oddly, only the top half of the smartphone gets warm, likely because that’s where the chipset is located.

Like the Z Fold 3, the Flip 3 includes Samsung’s ‘Labs’ feature that automatically forces apps to offer the ‘Flex mode’ panel, a feature meant to leverage the folding screen for unique app experiences, such as putting a video on one half and comments on the other. YouTube does that already, but the Flex mode panel works differently with each app (and often not as well as with YouTube). 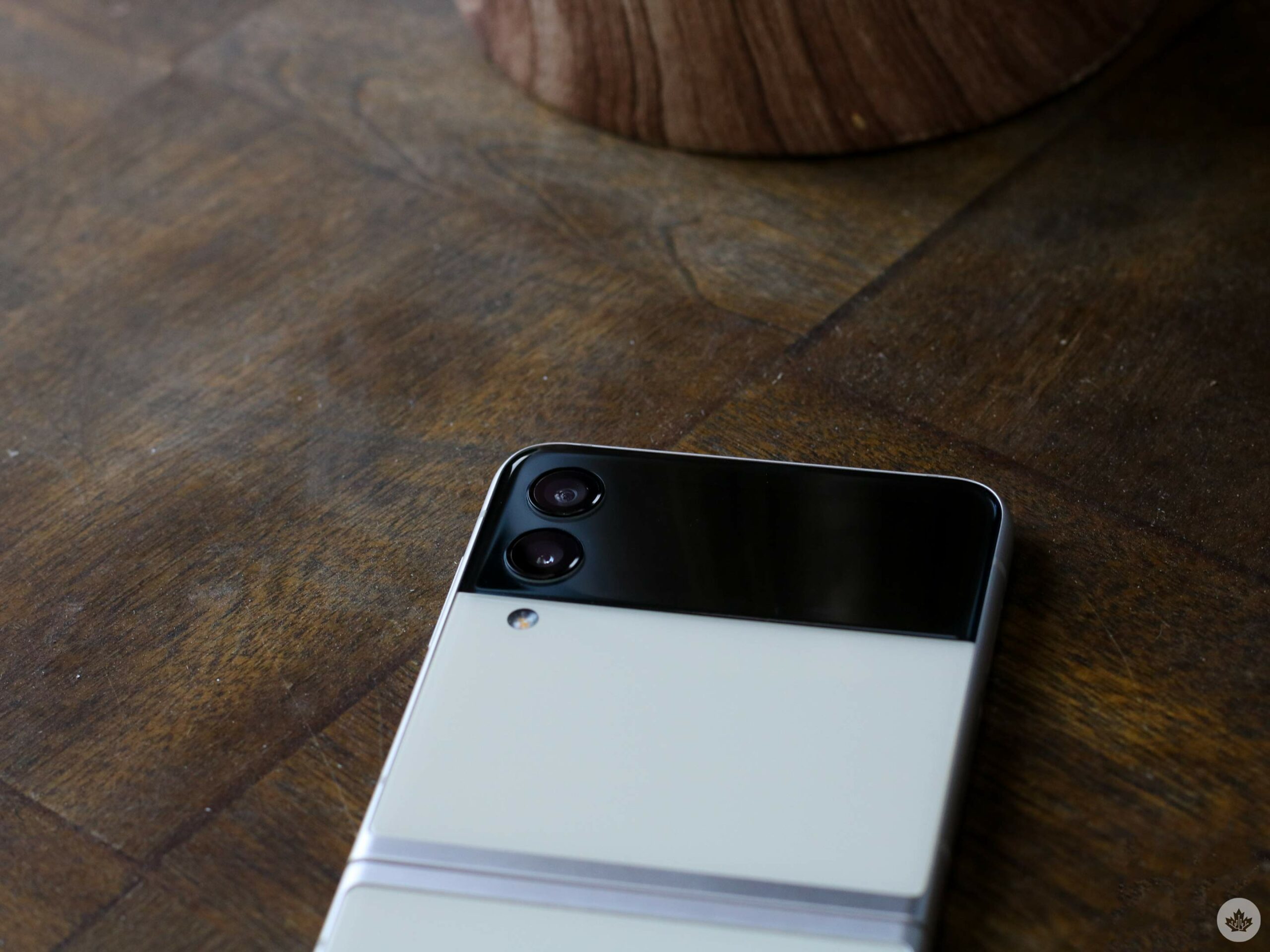 On Messages, for example, all the messages go on the top part of the screen and there’s nothing on the bottom half of the handset. After forcing Labs with Messages, I decided not to try it with another app because of how poorly it looked and operated.

The Z Flip 3 also features a 3,300mAh battery that doesn’t last all day, unfortunately. I found that if I used the device consistently starting at 9am, it’ll only make it until roughly 7pm. Checking the phone’s ‘Battery’ settings reveals that I only ever get at most four and a half hours of screen-on time. It’s unfortunate that the battery doesn’t last as long as I’d hoped it would, as it’s probably the Z Flip 3’s most significant issue.

Another negative point I should mention is that the Cover Screen doesn’t let you use your widgets when charging the device. 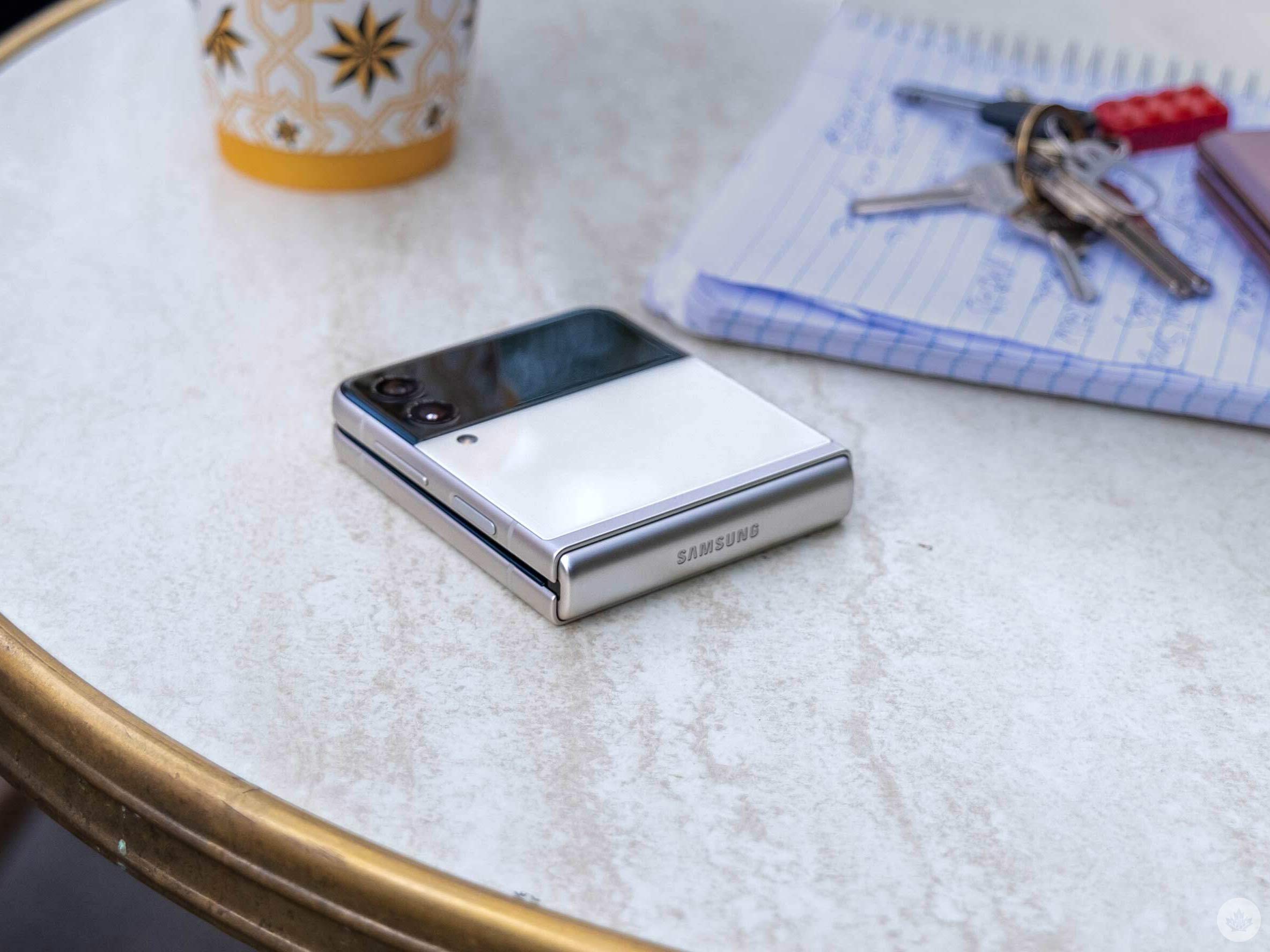 Finally, the Z Flip 3 features dual speakers on the top and bottom of the smartphone, offering a reasonably loud amount of sound. It won’t replace an actual external Bluetooth speaker (no smartphone really can), but it’s good enough to provide background music when you’re hanging out with friends or roommates.

Using the Sound Meter app, I determined the Z Flip 3’s speakers are louder than the Pixel 5 and S21+ and typically peaked around 75 to 79 decibels. That said, they still sound like smartphone speakers, which means they don’t offer a ton of bass and the sound profile isn’t very full. 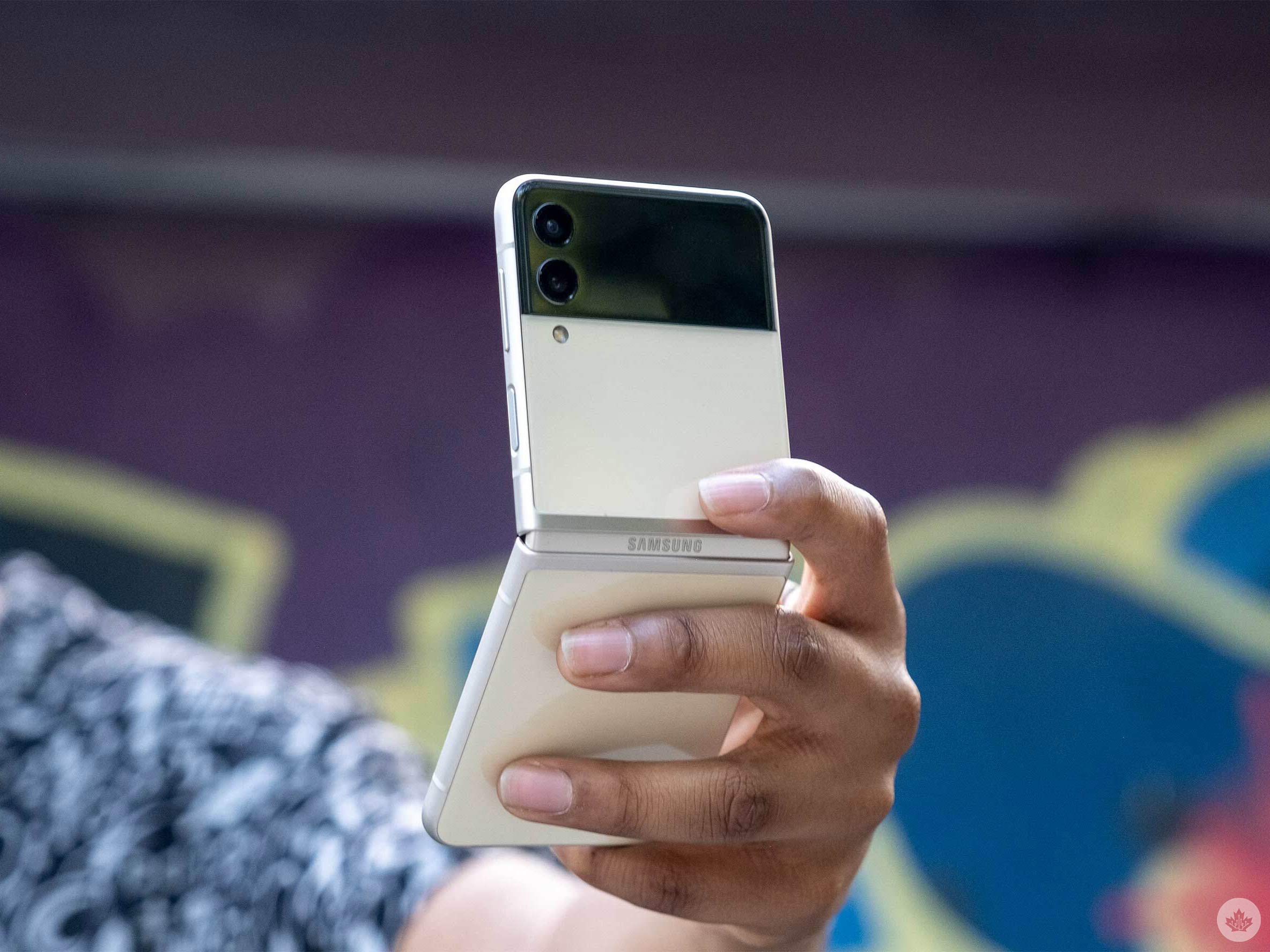 The Z Flip 3 features two 12-megapixel shooters, a wide-angle and ultra-wide angle, but it lacks a telephoto lens. Some might not like this, but I don’t mind it, although at one point I was trying to take a dope picture of a hawk and using the digital zoom resulted in several not-so-great shots. In some ways, this reminds me of what Google did with the mid-range Pixel 5; still, at a far more expensive $1,259, I expected the Z Flip 3 to feature a telephoto shooter.

Even though the phone doesn’t feature a telephoto lens, it does take impressive shots with the camera hardware it has. The Z Flip 3’s photos are sometimes oversaturated, like most Samsung smartphone cameras, but images are vibrant, detailed, and show a wide range of colours. 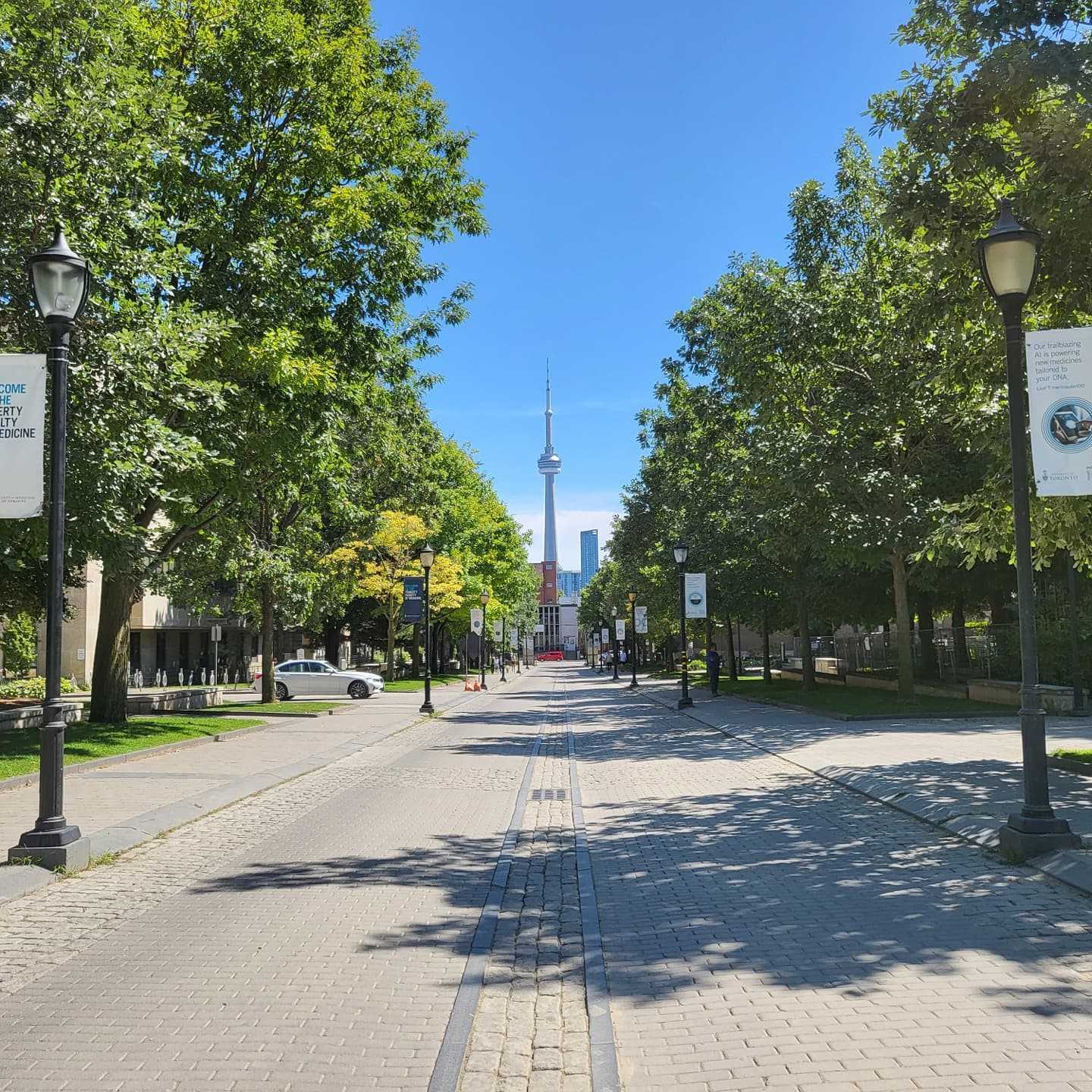 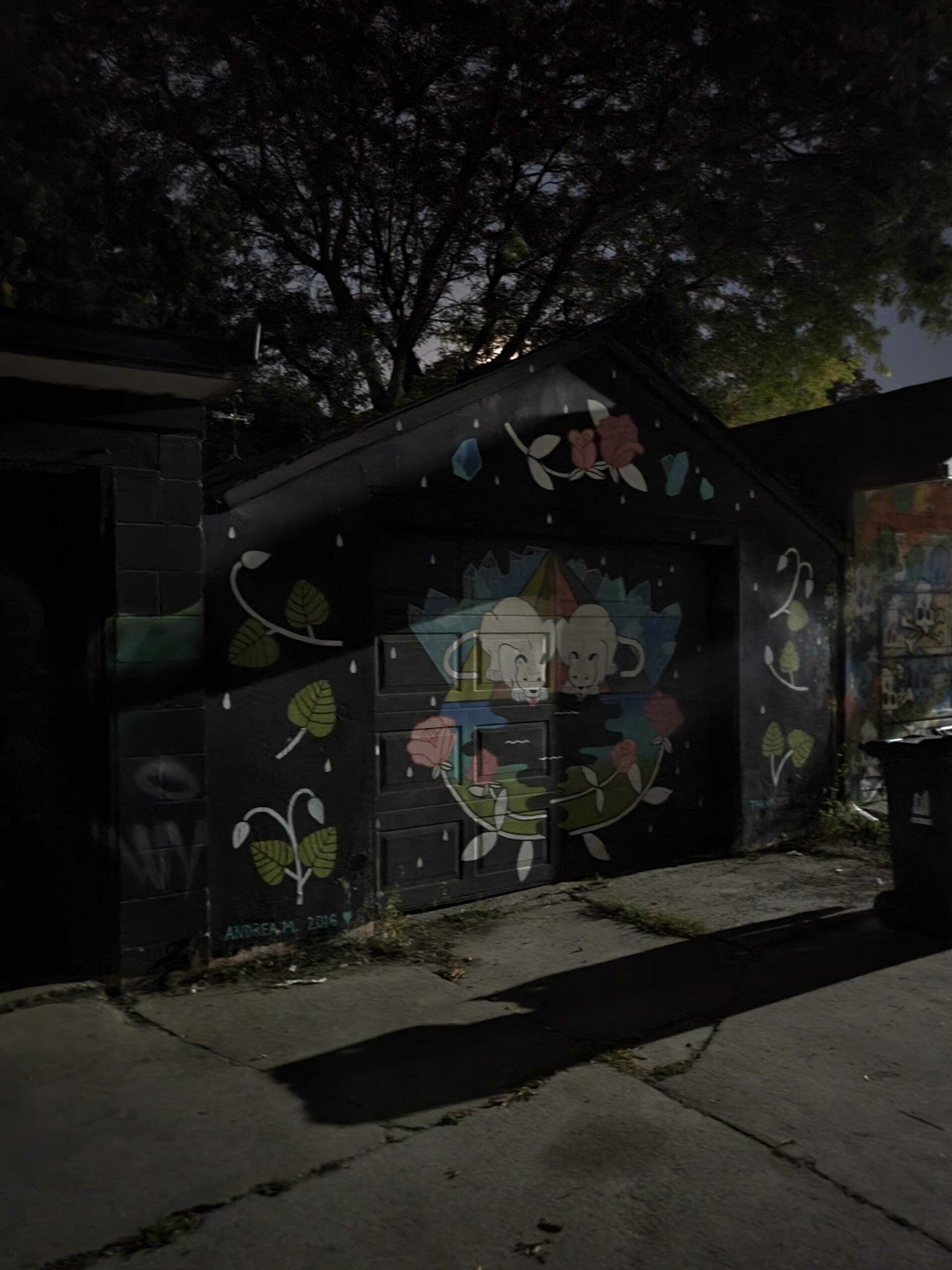 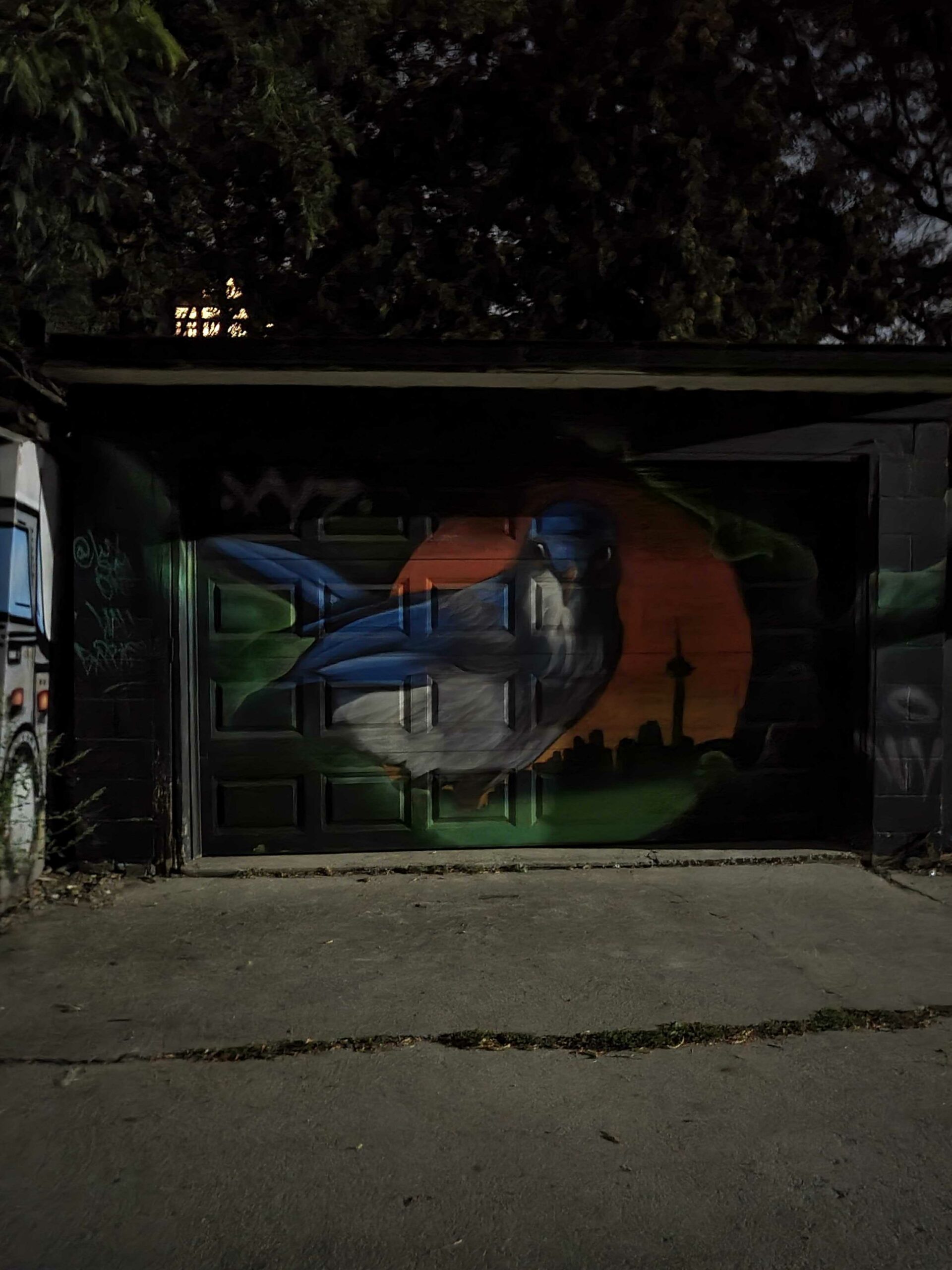 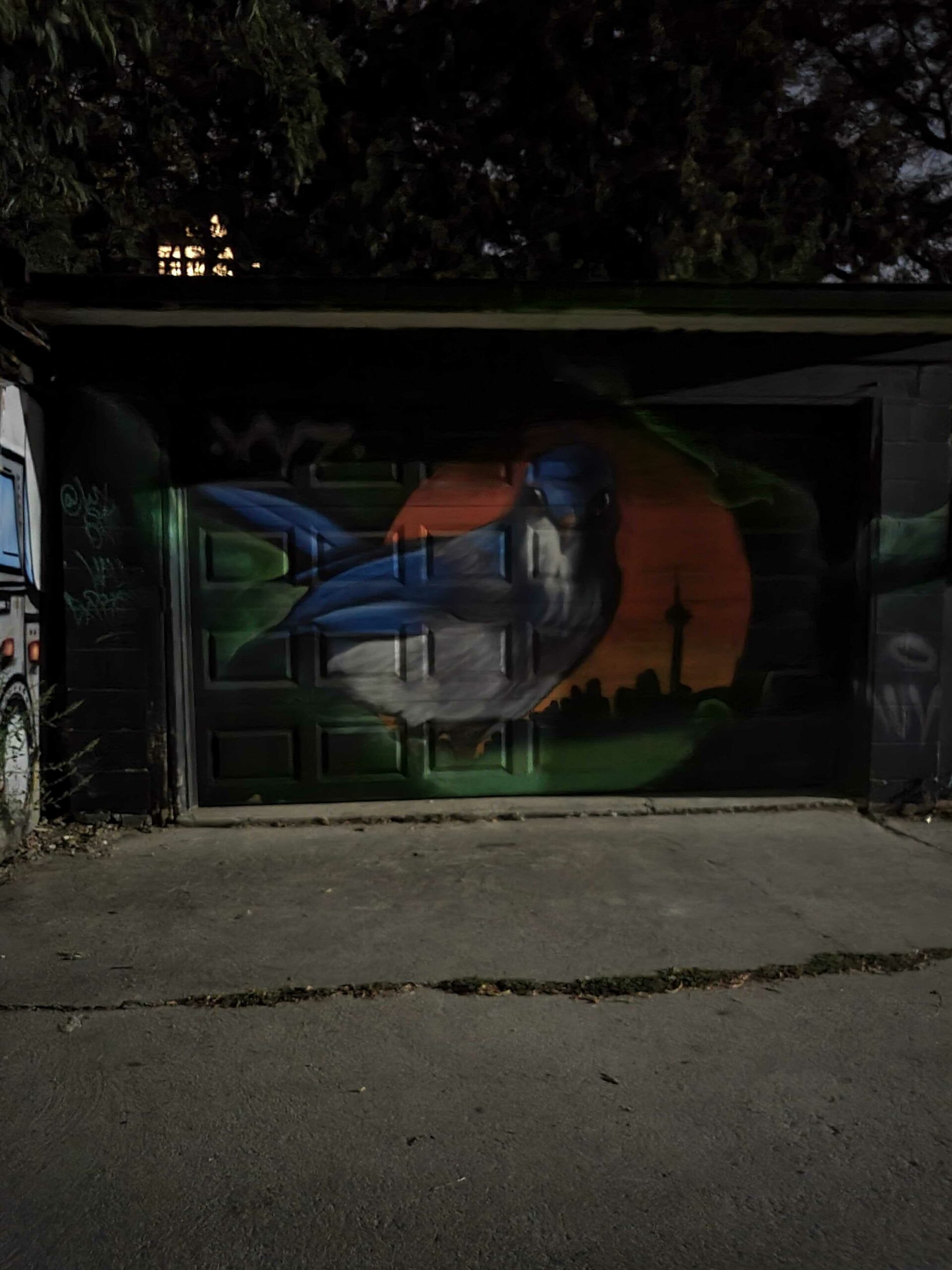 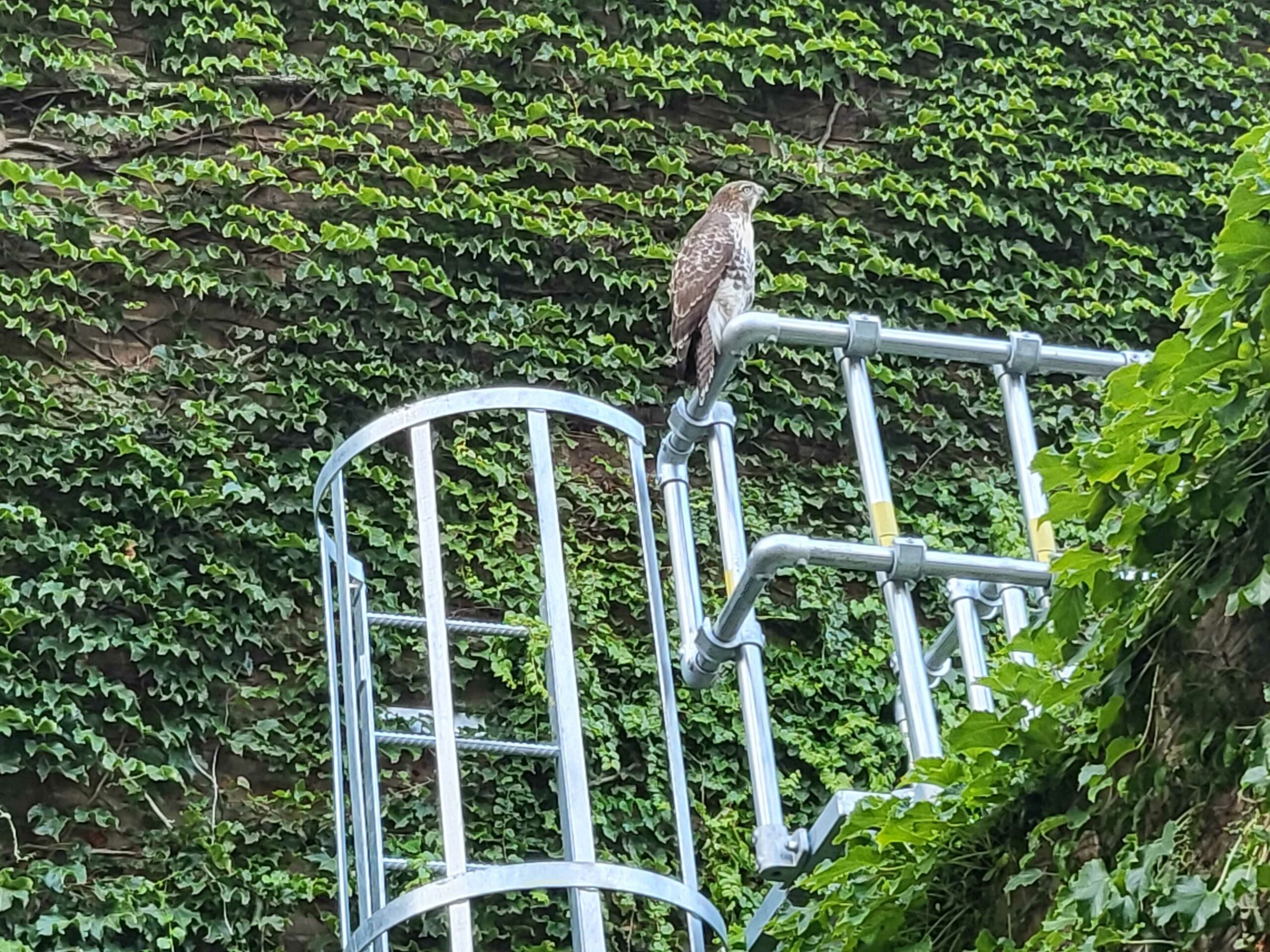 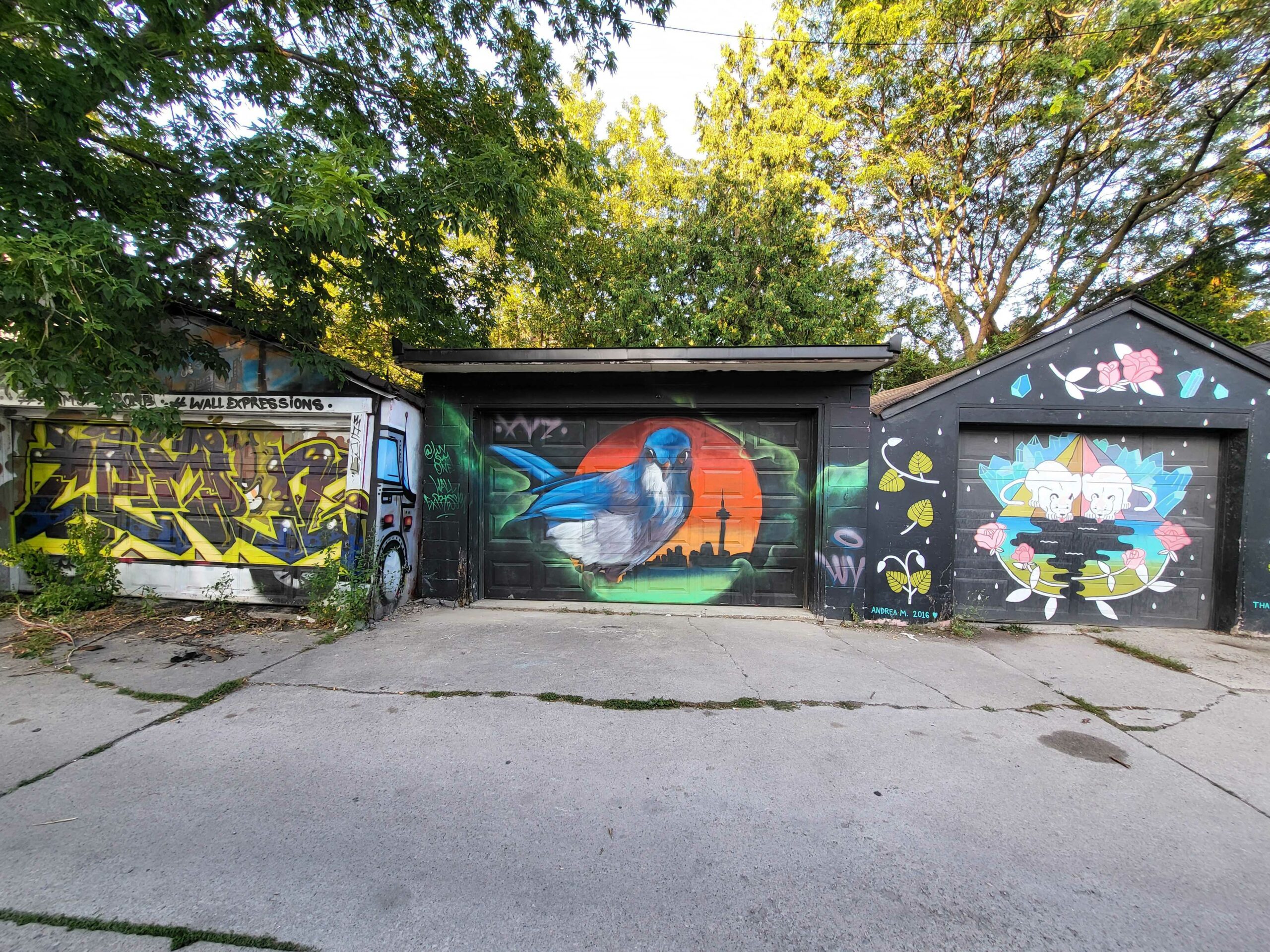 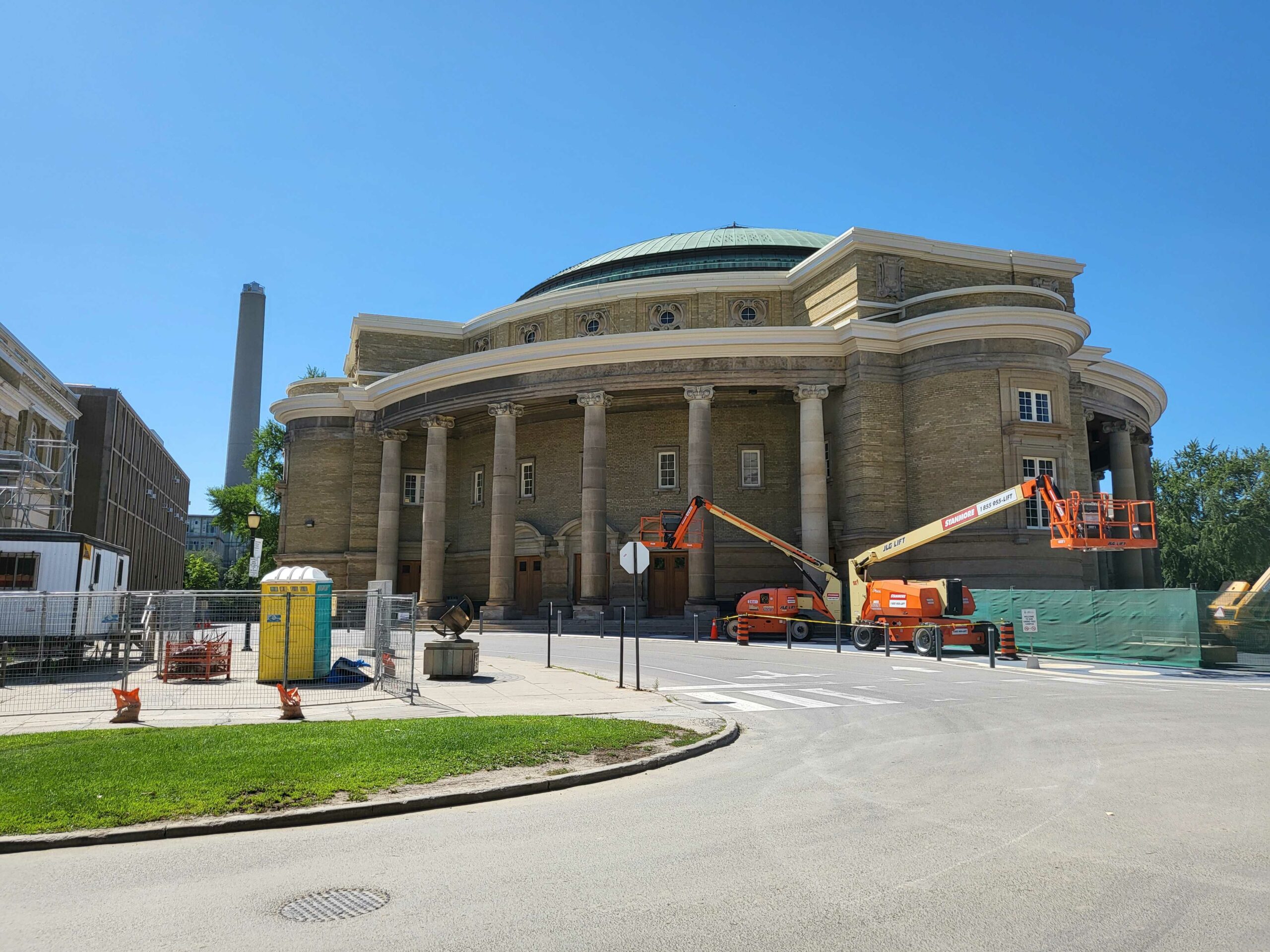 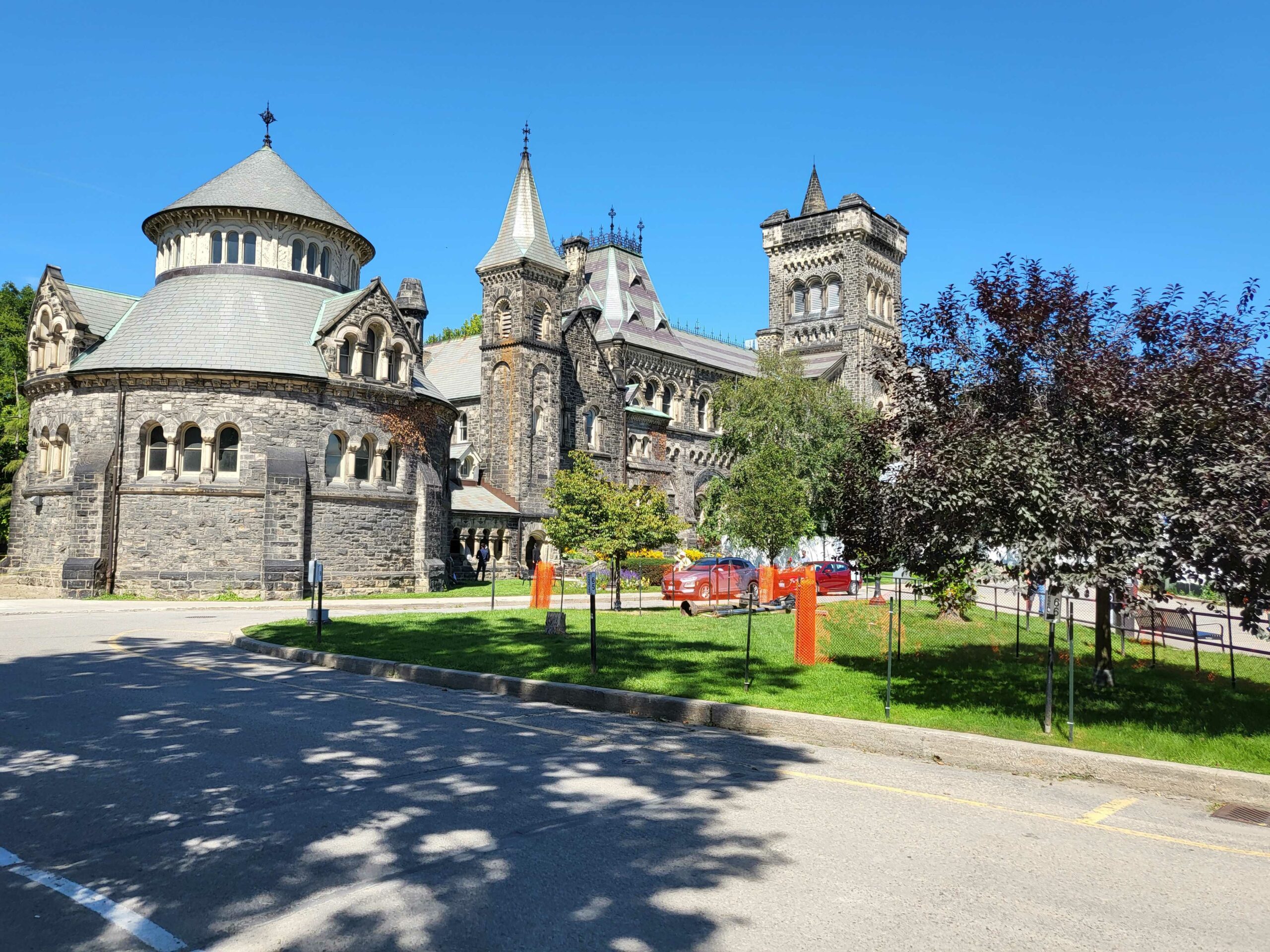 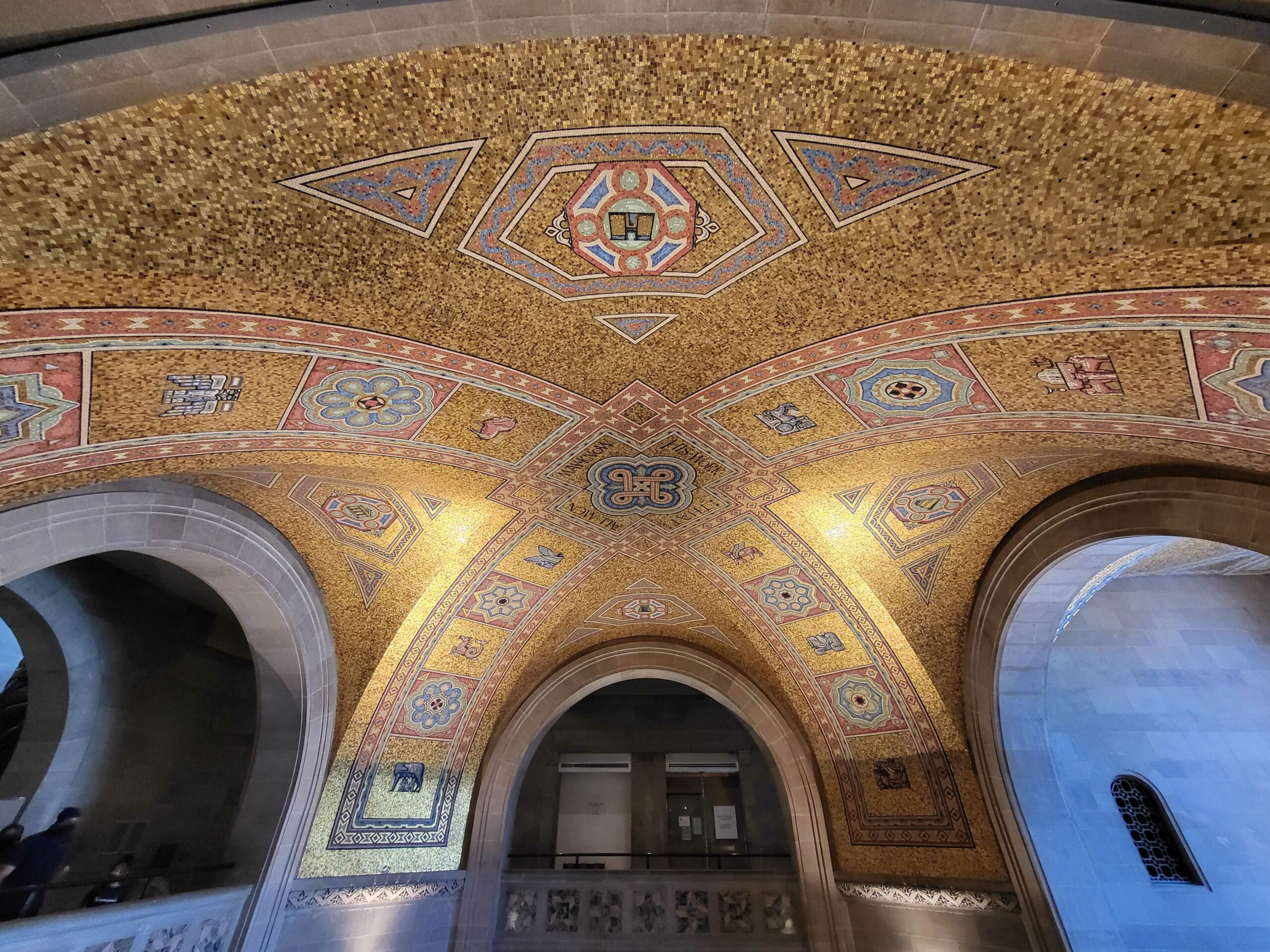 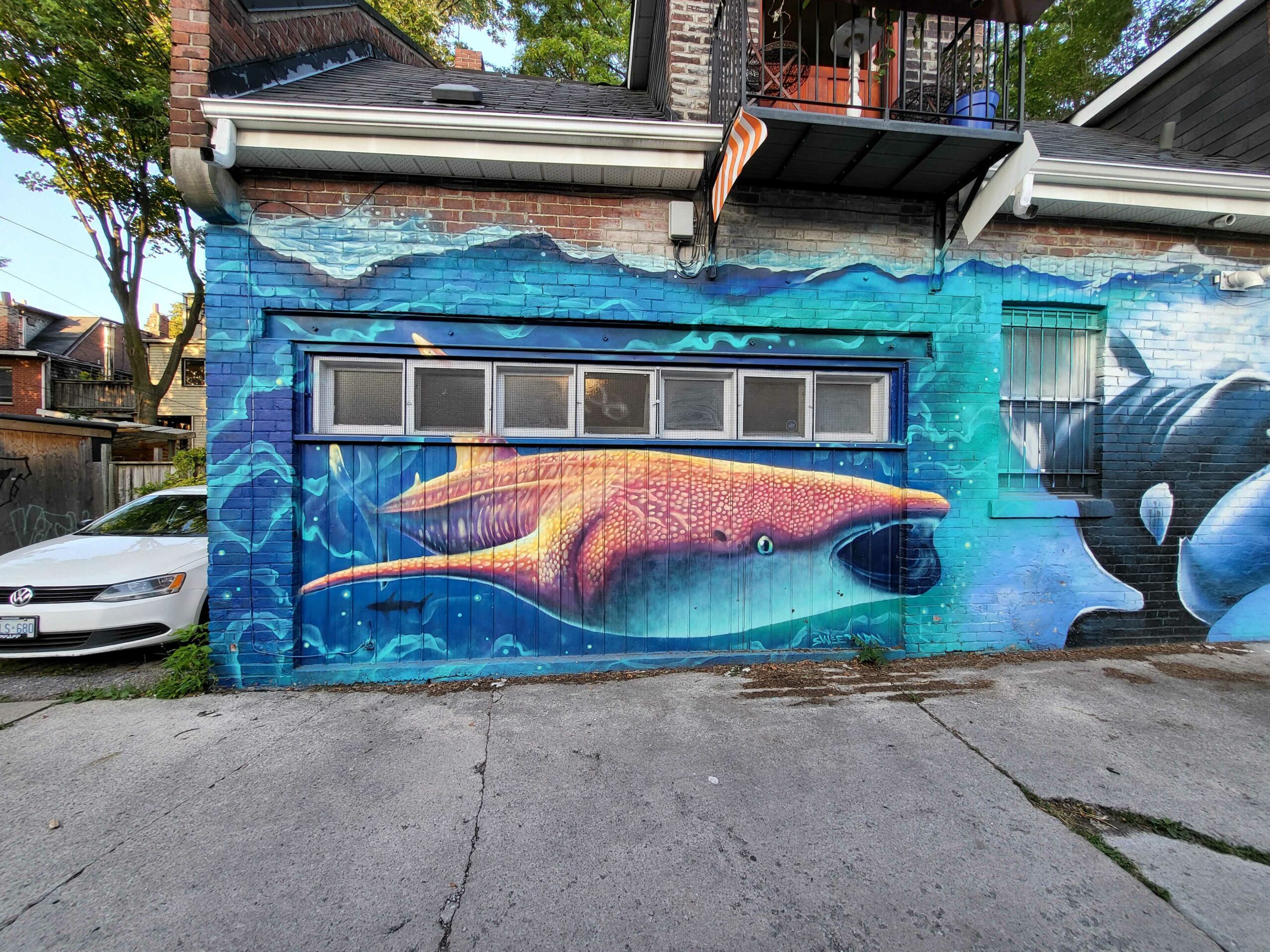 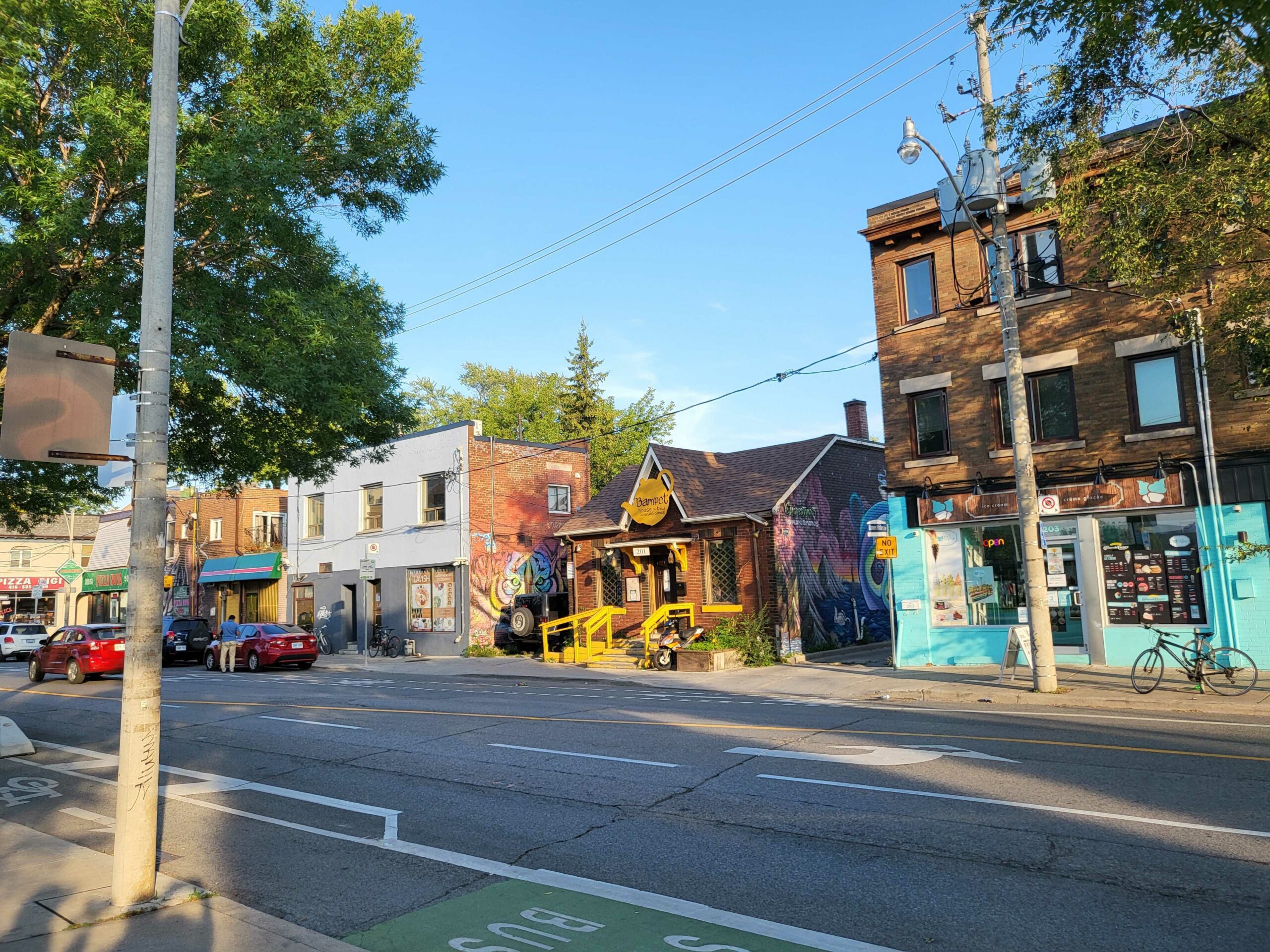 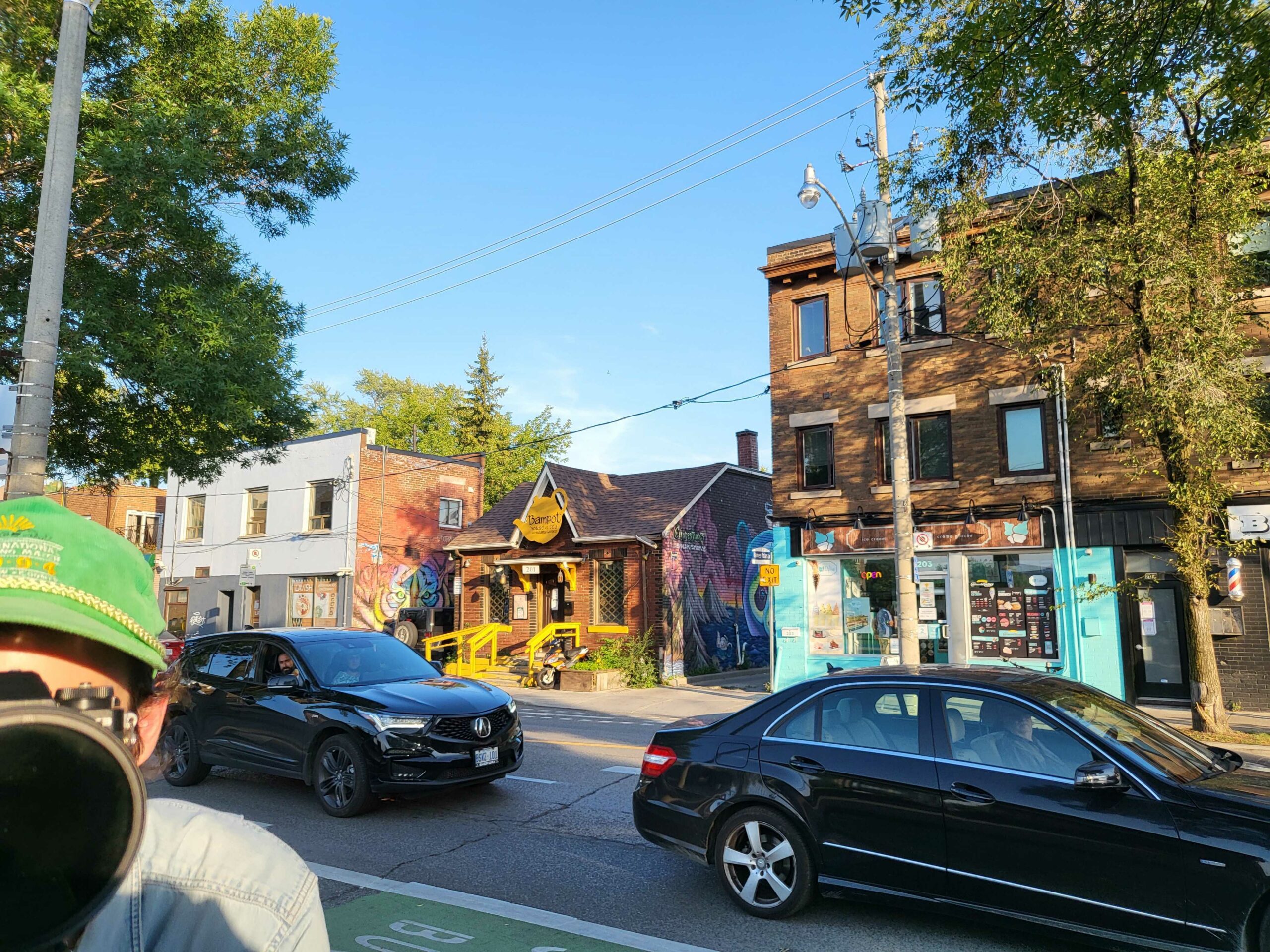 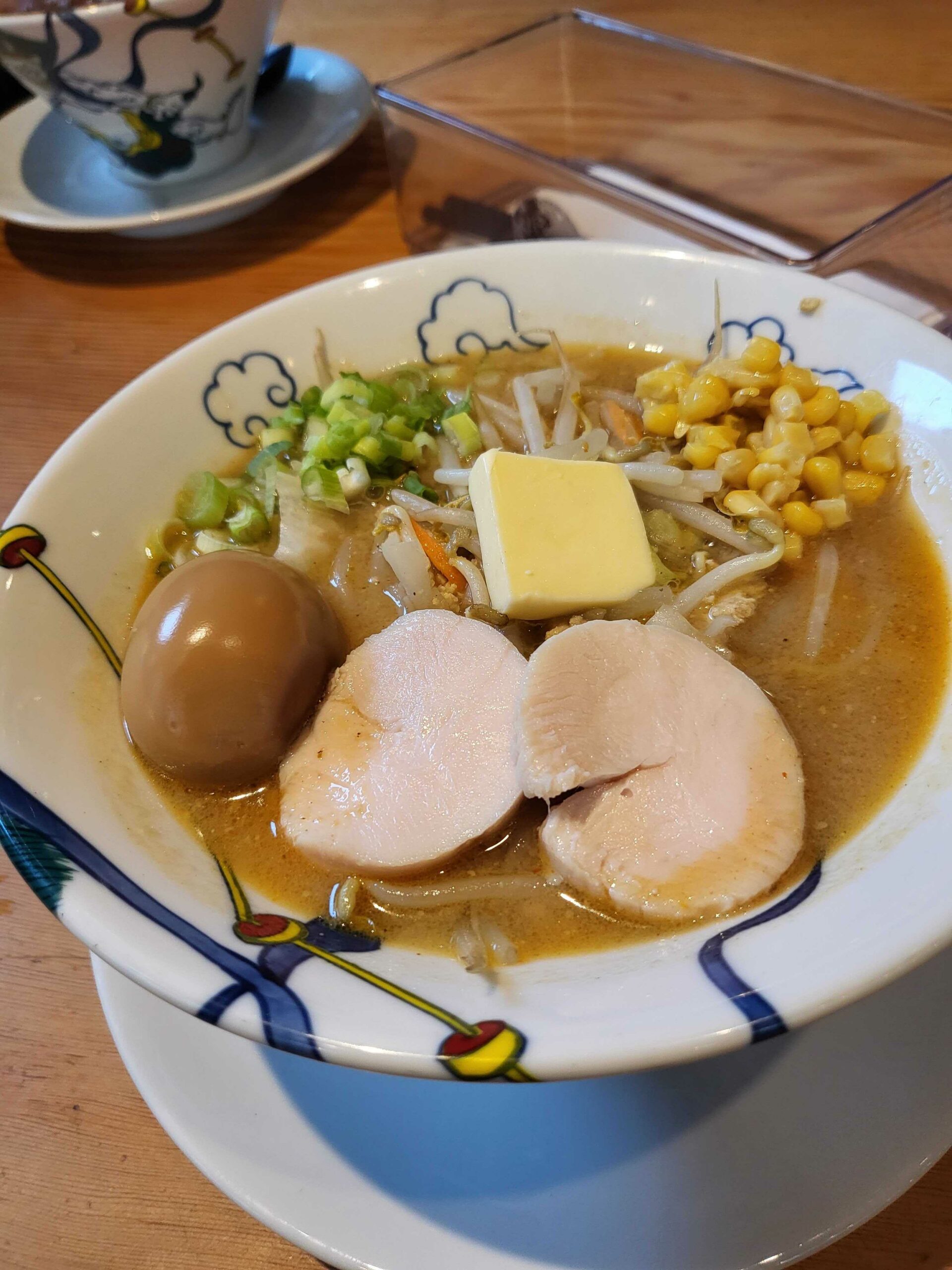 For example, you can clearly make out shadows, the sun setting, and the blue of the sky.

Sometimes the Z Flip 3’s image optimizer can make a mess of photos, but for the most part, it doesn’t add much to images save for making colours deeper. The AI-powered ‘Scene Optimizer’ typically results in greener grass or slightly more vivid flowers.

Taking selfies with the Z Flip 3’s front-facing camera is what I’d describe as an okay experience. Similar to most Samsung smartphones, my skin is a little too light in images, and you can’t make out the follicles of hair in my beard. However, when you take selfies with the Z Flip 3’s Cover Screen using the handset’s main 12-megapixel shooters, there’s a wider range of colour and detail, for instance, you can better make out the details in my beard. 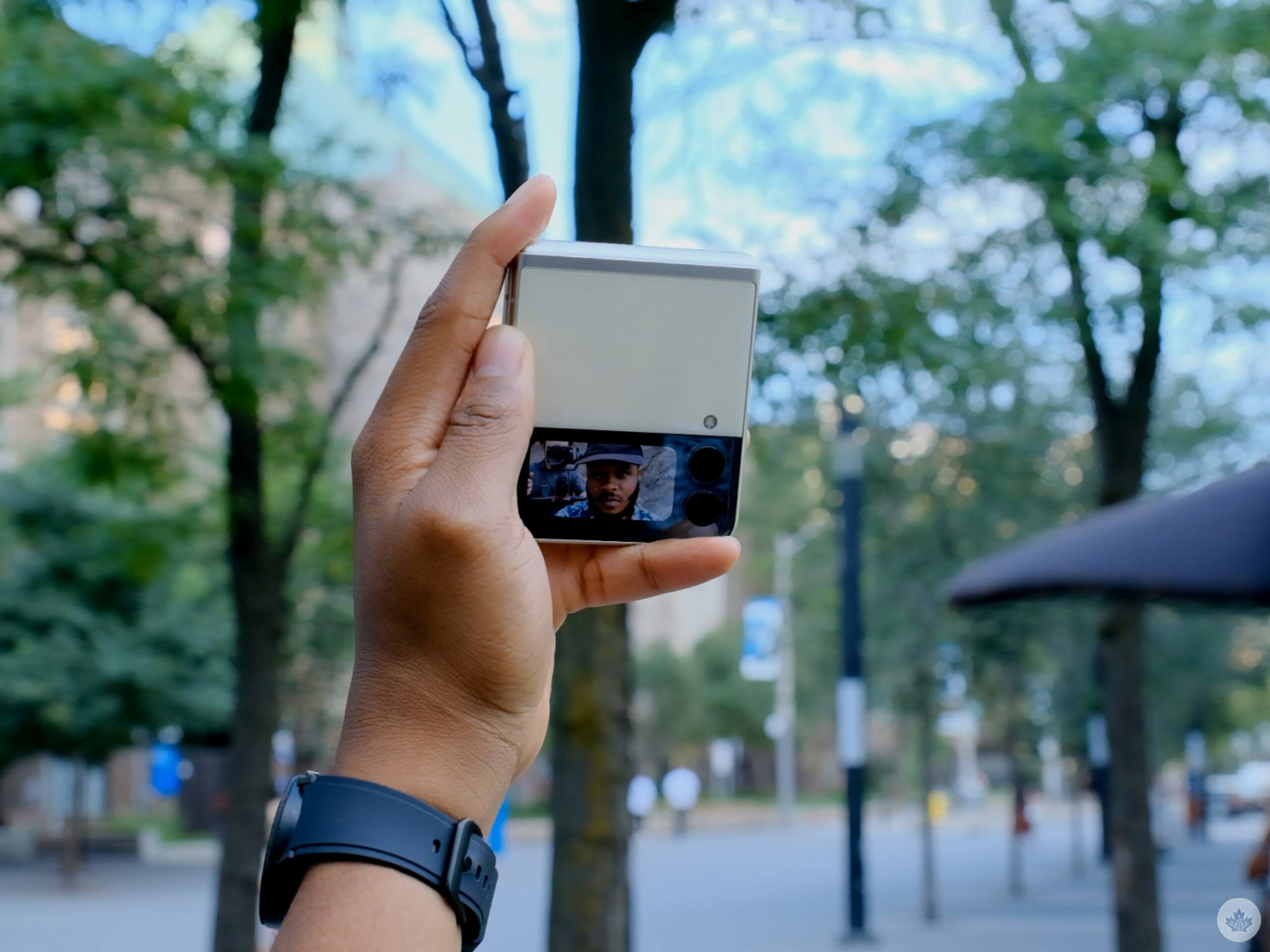 If you want to see a camera comparison, take a look at our video below:

With night shots, I had to hold the phone a bit longer than I did with the Galaxy S21+. Generally, the images are still pretty dark, and I think the Pixel 5 and iPhone 12 Pro are better at taking pictures in low-light. That said, the images are decent so long as you’re using the Z Flip 3’s main shooter; the ultra-wide camera is unable to take shots with Night Mode.

The most accessible foldable

Galaxy Z Flip 3 is a flagship smartphone, and while it’s definitely not the most affordable phone on the market, its price tag is comparable to other high-end devices out there.

In fact, you could argue that the Flip 3 is the first foldable smartphone an average person might consider buying. For those looking to get this phone, I’d also consider buying a case. While the foldable handset is pretty sturdy, I’m still concerned about its durability if I happened to drop it. Not to mention how much you'll be able to fold it over time.

Further other flagships on the market typically offer a telephoto lens, better battery life, and a lot have more RAM, but I wouldn’t say you’re giving up a lot with this foldable device. If you’re okay with that and the ever-noticeable crease, this year’s Z Galaxy Flip 3 is a pretty good flagship smartphone option.

"Samsung's Galaxy Z Flip 3 is a flagship smartphone, and while it’s definitely not the most affordable phone on the market, its price tag is comparable to other high-end devices out there"