Wild Rift is the League of Legends for everyone 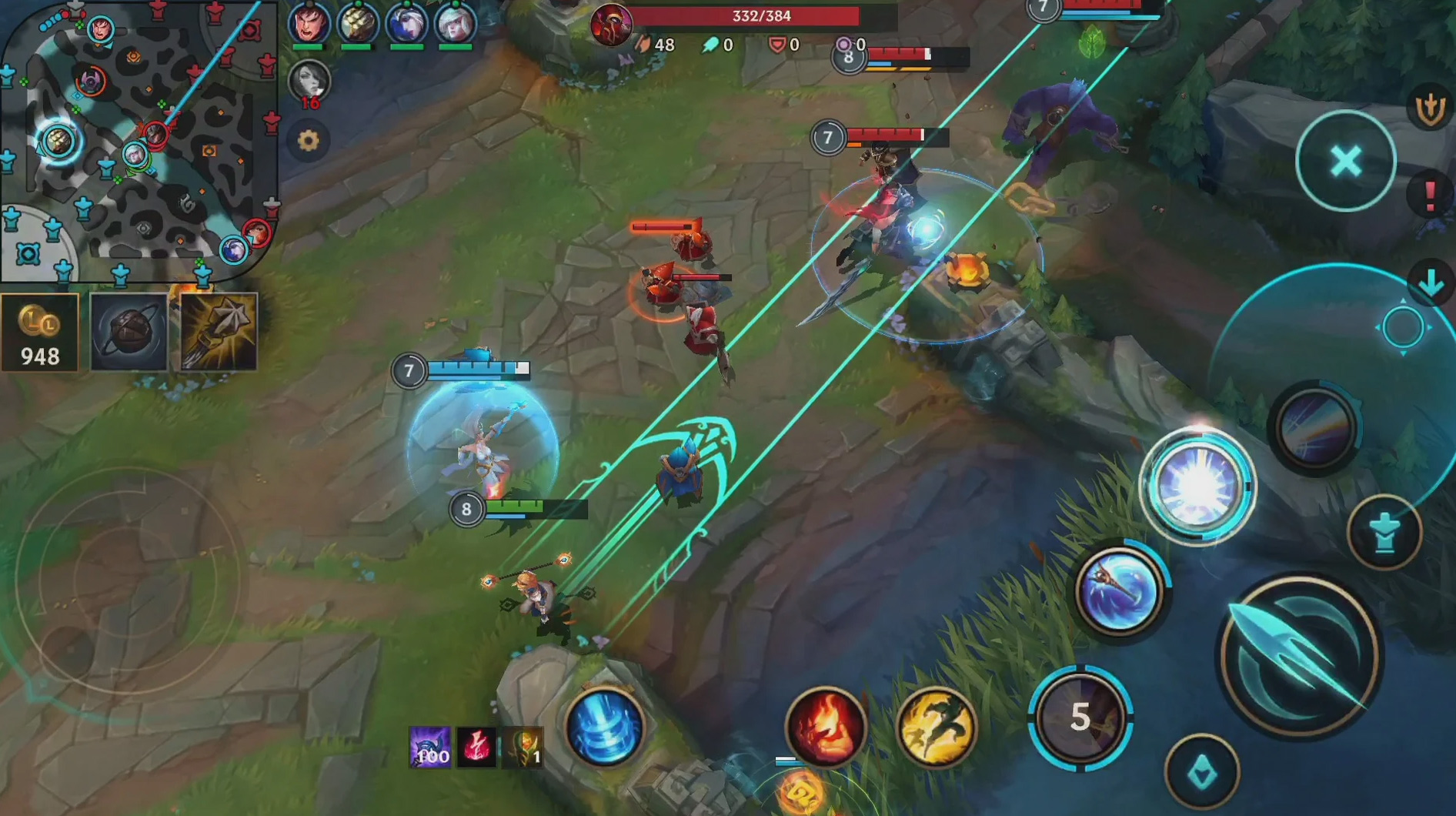 I’ve been console gaming for the past 20 years, but in 2020 I wanted to get into League of Legends because several of my friends started playing the game. While I don’t have a ‘gaming PC,’ I do own a relatively powerful 2019 HP Spectre that was capable of playing League (I know League isn’t that resource-intensive, but bear with me). I’d connect my gaming keyboard and mouse to the laptop, and since the Spectre is convertible, I positioned it so only the display would be visible, simulating a monitor.

And with that, I was ready to play League. However, even with a good enough set up to run the game, I failed to be the least bit good at it. I was way too slow with the mouse and keyboard and longed for the simplicity and familiarity of a controller.

So when I got access to the League of Legends: Wild Rift open beta, I knew I needed to give it a shot.

While Wild Rift isn’t the full League package, it’s great for those interested in maybe one day playing the title on PC, don’t have access to a PC, or who, like me, just can’t get a handle on playing games with a mouse and keyboard. 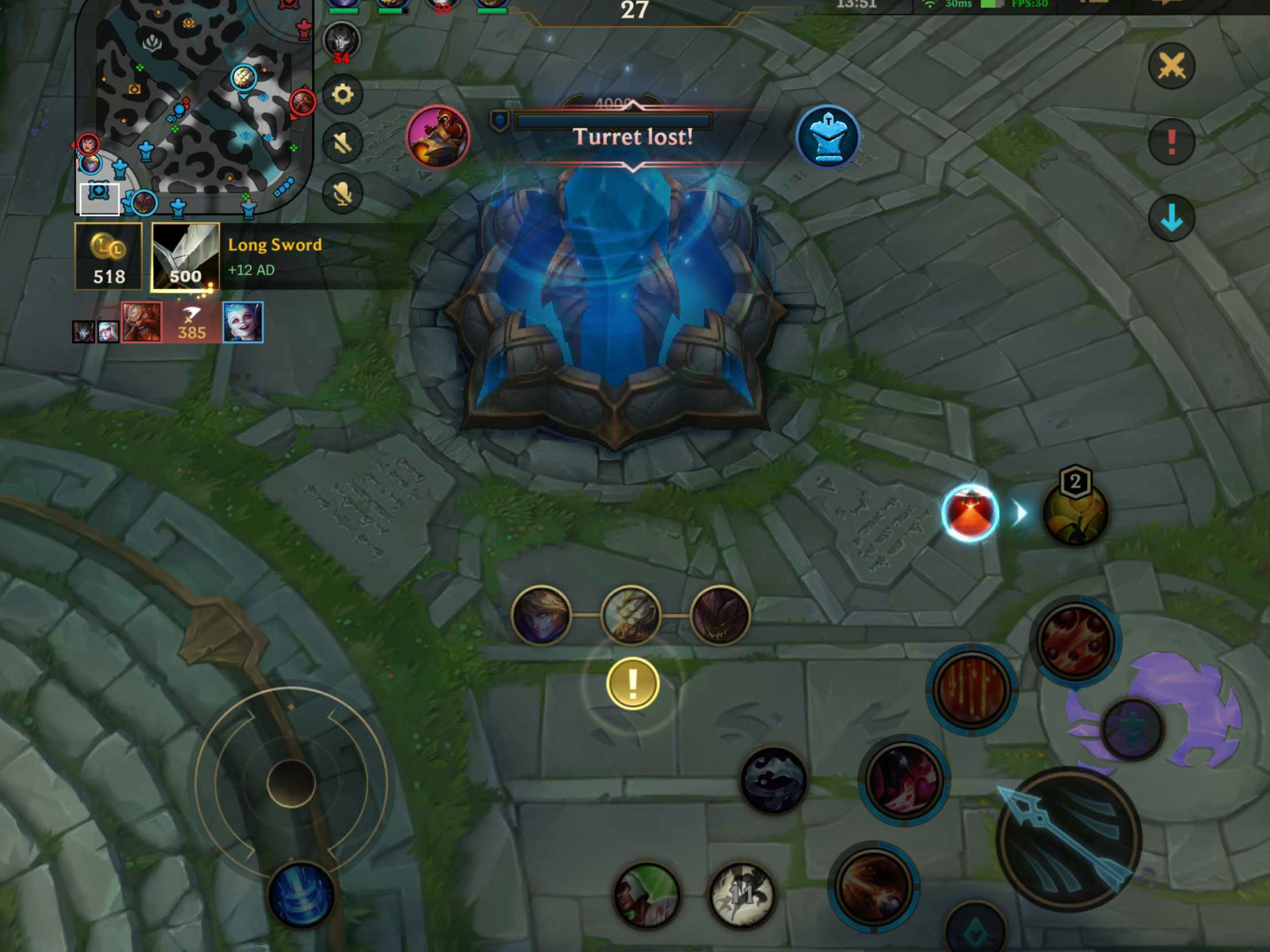 I’ve played Wild Rift on two Android devices: the Galaxy Z Fold 2 and the Pixel 5. The game played well on the Pixel 5’s Snapdragon 765 processor, and while the smartphone did get warm after 15 minutes, the heat was definitely still bearable. However, playing on the Z Fold 2’s larger display was preferable as you’re able to see the battlefield more clearly, and your fingers aren’t that squished together while playing. With this in mind, if you have a foldable or Android/iOS tablet, Wild Rift offers a better experience on those devices.

Additionally, on the Z Fold 2’s Snapdragon 865+ processor, I’ve played three 10- to 20-minute games in a row and never even noticed a change in the handset’s temperature.

While playing on the Z Fold 2, I set the game at 60fps for a smoother and more responsive experience. There will eventually be options for 90fps, and 120fps with Wild Rift, but they’re coming in an upcoming update. On the other hand, I played at 30fps on the Pixel 5. While the game was still quite responsive, 60fps on the Z Fold 2 became my go-to option.

“…many characters have undergone at least some changes, with some more drastic than others.”

Wild Rift’s visuals are overall impressive for a mobile game, though don’t expect the graphics to rival League of Legends‘ PC version. Even the in-game character models and NPCs (non-player characters) like minions, dragons and the Rift Herald all look great.

I’ve also never run into lag or skipped frames in my time playing the game, which isn’t typical of my experience with other mobile titles like PUBG. There are even character pages that offer more information about the game’s roster of Champions, including great-looking card art in both 3D and 2D modes. It’s obvious Riot put a lot of care into the game’s aesthetics. 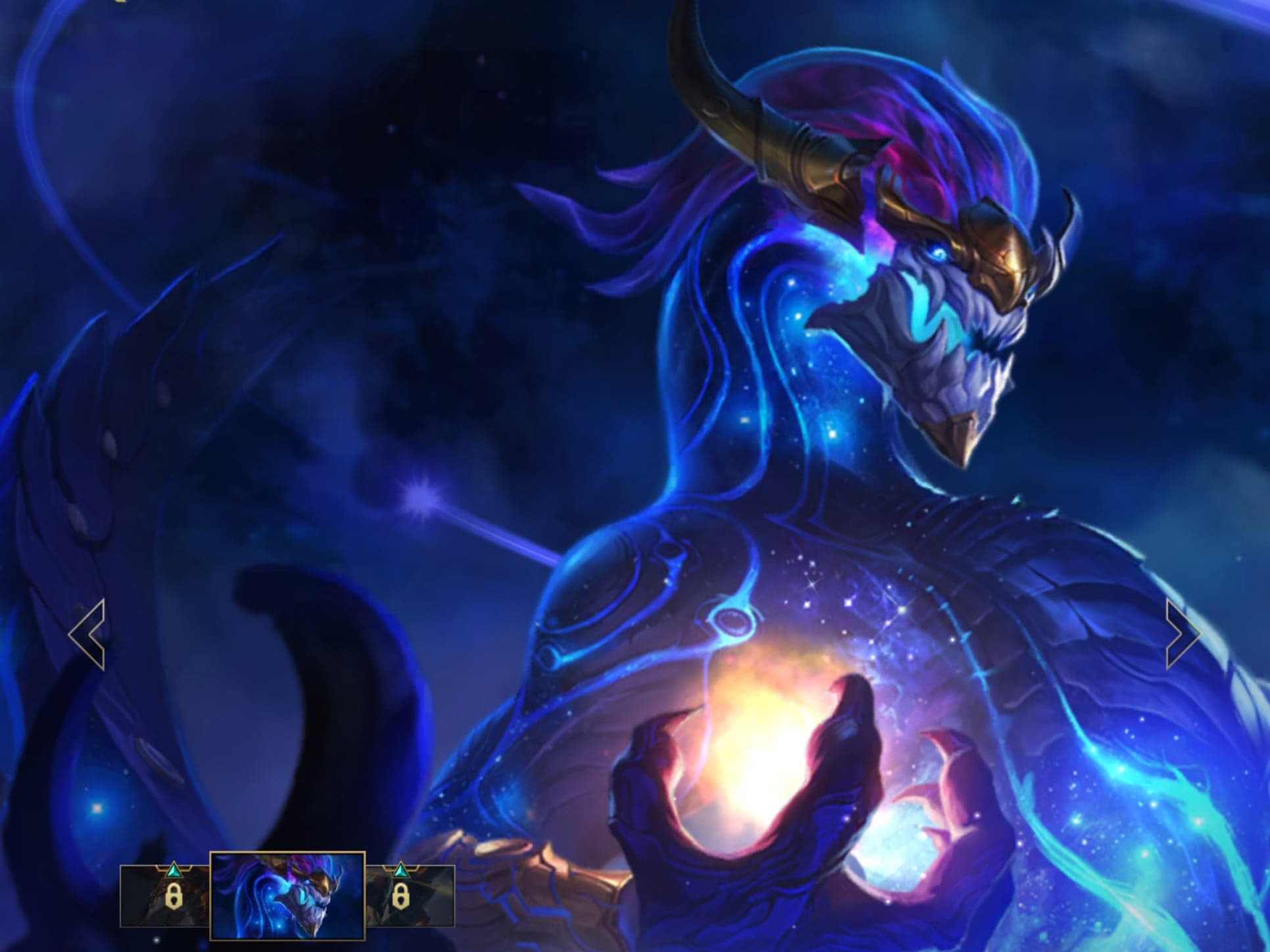 Wild Rift doesn’t feature the full roster of characters available in its PC counterpart, though Riot says it will continue to add more characters to the game in the coming months. For instance, throughout April and May, players will get access to five new Champions: Galio, the Colossus; Rammus, the Armordillo; Kha’Zix, the Voidreaver; Rengar, the Pridestalker; and Renekton, the Butcher of the Sands. This will bring the total roster to 61, out of the 155 characters available in the PC game.

But for those who are big fans of characters like Ilaoi, the Kracken Priestess, Senna, the Redeemer or Pyke, the Bloodharbor Ripper, you’ll be missing out — for now, at least.

That said, many fan-favourites are currently in the game, including Ahri, Akali, Braum, Sona, Miss Fortune and more, so plenty of series veterans should be happy with what’s available. I’m a weeb and a fan of Ahri, so Riot has me covered.

In this mobile take on the League of Legends series, Riot has made changes to character abilities to better optimize the game for touchscreens. I haven’t noticed significant changes, but that’s likely due to my lack of experience with the PC game. That said, while I was playing Aurelion Sol, I felt like I had more control over his ‘Comet of Legend’ ability. Checking out the game’s fandom page seems to indicate many characters have undergone at least some changes, with some more drastic than others.

Since Riot has to change some of these characters’ abilities, create new card art, new indicators and, in some cases, even make new skins, it makes sense that it hasn’t released all of its characters at once for the mobile game.

The developer has even released some new champion-related videos specifically for Wild Rift. 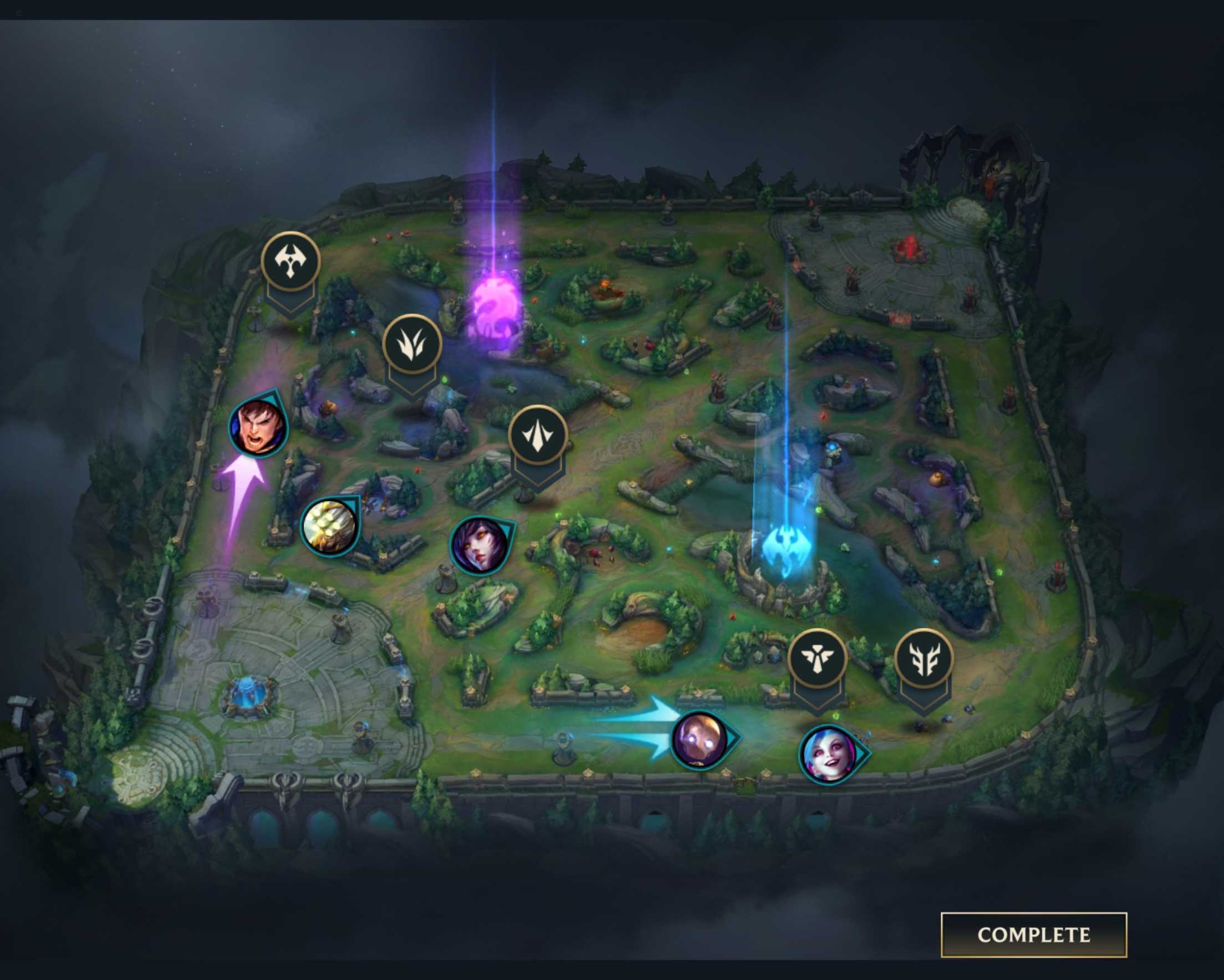 At its core, Wild Rift plays similarly to Riot Games’ PC offering, League of Legends. It’s a multiplayer online battle arena (MOBA) with three lanes that features 5v5 PVP (player vs player) gameplay. For noobs like me, countless hand-holding tutorials help you get a better grasp on the game’s mechanics. I found these guides more helpful than they were in the PC version now that I feel that I have a better handle on how the MOBA plays.

The more you play Wild Rift, the more you progress, and you’ll unlock new heroes with chests by levelling up and with ‘Blue Motes’ or in-game currency. Given that the game is free to play, you can’t access the full roster (and you can’t bring over your roster from PC, either), but I never felt like I didn’t have enough characters play as.

It’s worth noting that I obtained Ahri through the game’s level-up system and Aurelion Sol I got from a chest that gave you one free character of choice. You can purchase additional characters with actual money, but it’s entirely optional.

“In general, I’m not a big fan of mobile gaming, but Wild Rift might change that for me.”

When playing the beta before it publicly launched in Canada, it’d take me a minute or two to find a match, but now, matchmaking is even quicker. Speaking of matchmaking, I’ve won most of my games I’ve played so far, but I’m rarely doing the bulk of the work. I’m better than I am when playing the game on PC, but I still have a lot to learn. Since that’s the case, I feel that Wild Rift‘s matchmaking offers a pretty balanced experience, even for relatively inexperienced players like myself.

I haven’t tried ‘Ranked’ mode yet, as I’m not high enough level, so I can’t speak to how that game type plays yet.

Like the PC version of League of Legends, Wild Rift isn’t something you can pick up and play. Matches can last anywhere from 15-20 minutes (in the PC version, some matches can be a lot longer) and require your full attention, even more so than a game like Hearthstone or Magic: The Gathering Arena. 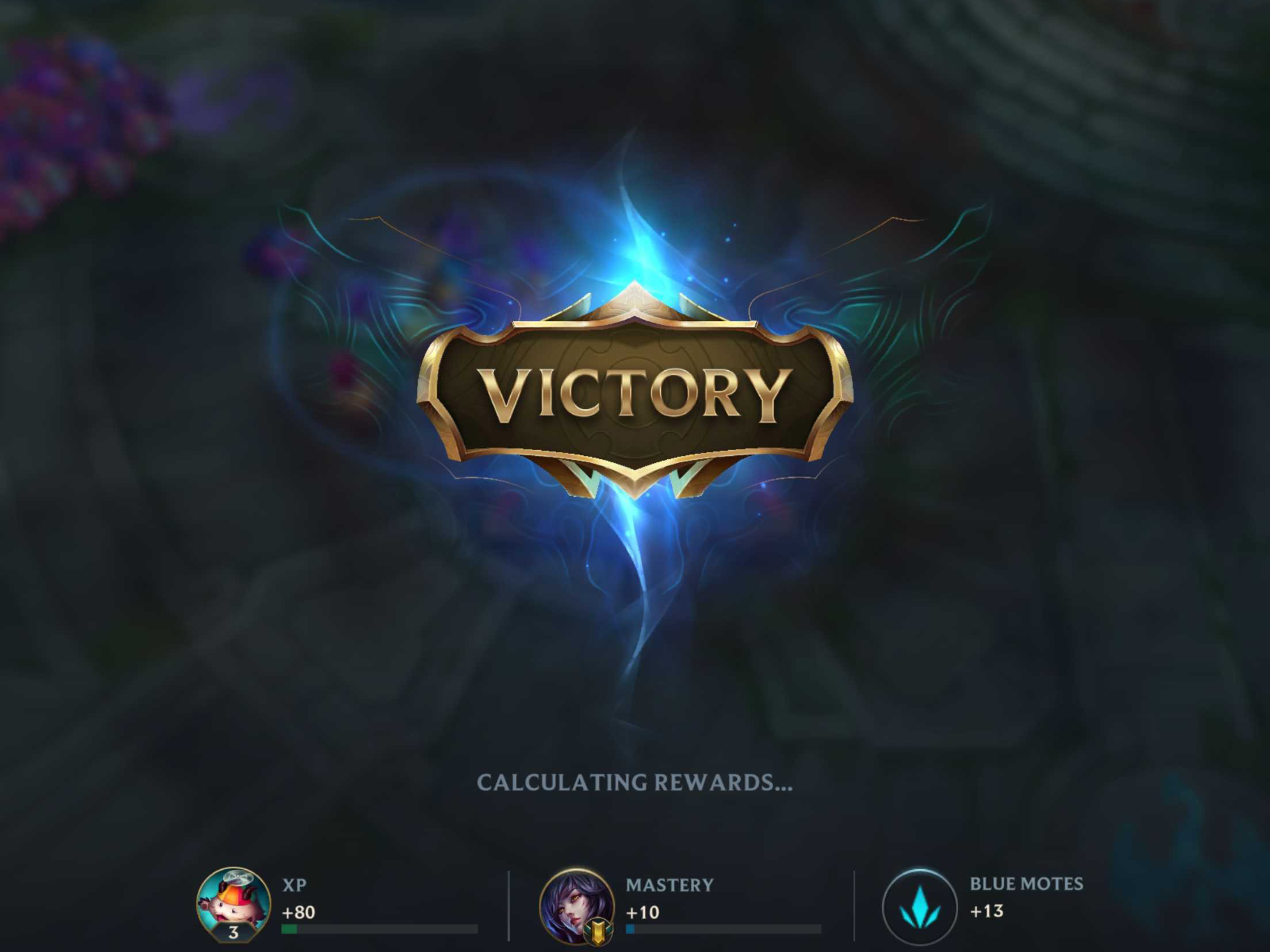 Wild Rift is a free-to-play title and offers an in-game currency to purchase new characters, but you’ll have to spend real money to purchase most of the skins and other customizations. A single skin can cost as much as $13.99, which will be steep for some people. I’m not the biggest fan of this approach to monetization given other free-to-play games I play like Apex Legends and Smite let you purchase at least some new skins with in-game currency. There are challenges you can complete that give users essentially skin loot boxes, that’ll give a skin at random or let users pick between five chosen skins. This is sort of a nice balance, but I’d prefer more freedom and an actual in-game currency to purchase cosmetics.

To be clear, Wild Rift isn’t a pay-to-win mobile title and these are only cosmetics.

In general, I’m not a big fan of mobile gaming, but Wild Rift might change that for me. I’m impressed with Wild Rift, and I enjoy MOBAs like Smite, so this is right up my alley. I’ve tried other MOBAs on mobile, but nothing has even come close to really catching my attention until now.

Wild Rift‘s gameplay is fluid, there’s a lot of content, and the League of Legends lore is vast. This past week I’ve even found myself putting down my controller and picking up my phone to play the game. For those interested in the concept of a mobile MOBA, I’d definitely give Wild Rift a chance.

The Wild Rift beta is available on Android and iOS.