"As much as we've made progress, there’s still a lot of progress to be made" 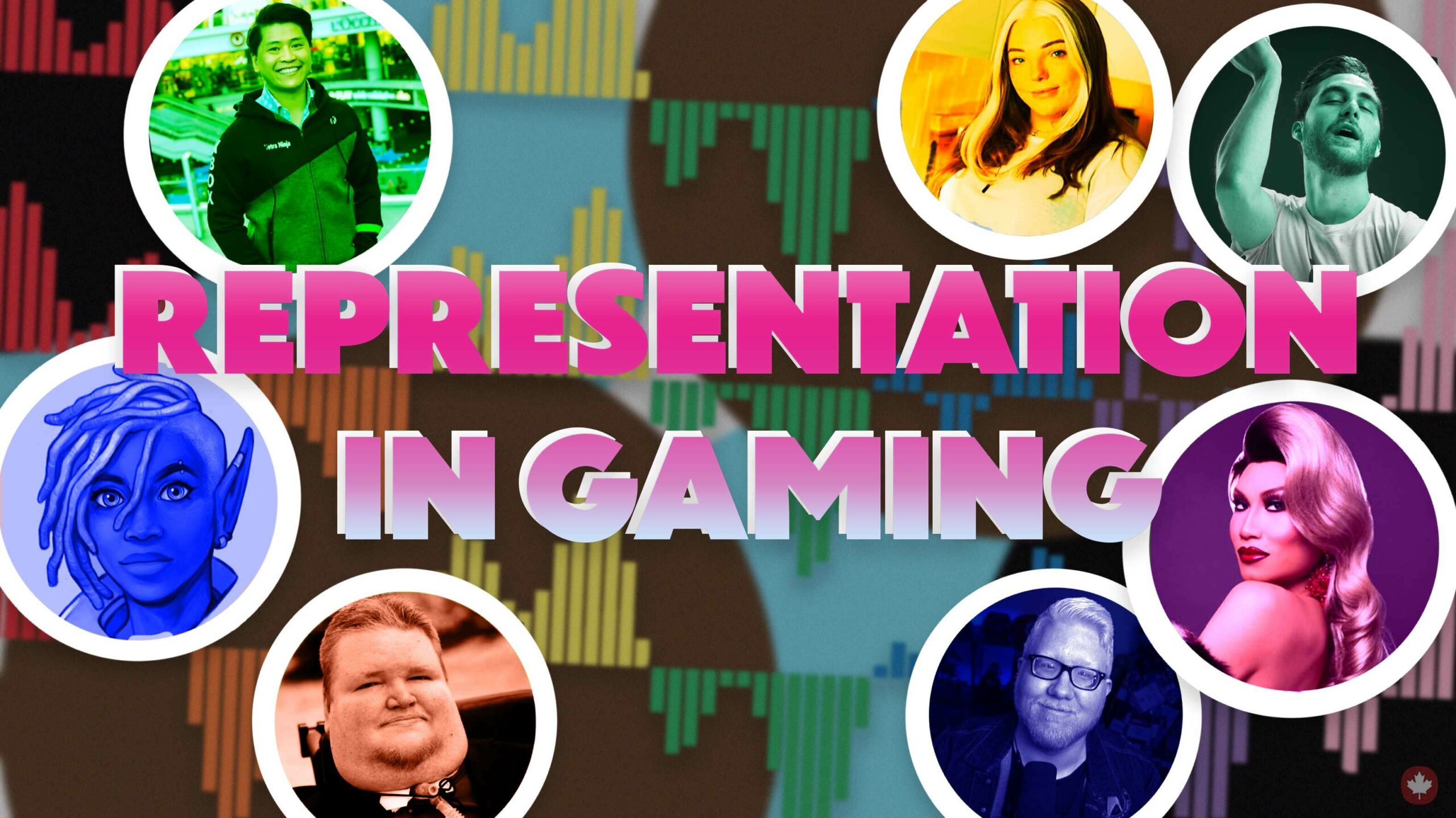 I’ve been playing video games for the majority of my life.

Ranging from Sonic on the Sega Genesis to the original Super Smash Bros. and Pokémon Stadium on the N64, and even The Simpsons and Teenage Mutant Ninja Turtles: Turtles in Time at the arcade, video games have always been something I’ve enjoyed and played for a significant part in my life.

However, even as a child, I quickly realized I wanted to be represented in the video games I played, but unfortunately, that wasn’t something I was able to experience very often.

A lot of people won’t understand what I mean, but that’s because taking on the role of a white, straight cis-male is extremely common in gaming — even today. I remember playing 2013’s Pokémon X and Y, the first game in the series where you can change the skin tone of the character, and I was ecstatic because finally, I could make myself darker.

It’s hard to explain, but in a sense, you want to be represented in the shows you see, the movies you watch and the video games you play. You feel a deeper connection to the character and can more easily relate to them, and that, in turn, makes the story so much more impactful.

When I recently finally reached 100 percent completion in Marvel’s Spider-Man: Miles Morales, one of the only video games I’ve ever encountered with a Black protagonist that didn’t feel like a walking stereotype, I realized that I wanted to reach out to those who aren’t well-represented in video games — women, BIPOC, LGBTQ+ people and those with disabilities — to hear why (or if) representation even matters to them.

Is there enough representation in video games?

Kate Rayner is a trans woman who serves as the studio technical director at Vancouver’s The Coalition (Gears 5), Xbox Games Studios

I feel there is not enough diversity or authentic representation in video games today. However, there is a lot to be optimistic about as we have seen trends towards more diverse gender, ethnic and LGBTQIA+ representation over the last decade.

The games industry historically targeted a cis-gendered white hetero-normative male gaming audience. Non-male gamers were commonly regarded as a minority. While perhaps true in the 90s, the gender ratio of game players has become essentially equal since 2010. While representation is still disproportionate, in recent years we have seen a positive trend towards more female and ethnic representation in mainstream games.

Over the last decade, we have seen increasingly more LGBTQIA+ representation in games. While the indie game scene is more progressive, there have been significant, albeit sometimes faltering, efforts at representation within mainstream gaming.

LGBTQIA+ characters and queer narratives can be found in major franchises like Dragon Age, Mass Effect, Assassins Creed, Borderlands, Overwatch, The Sims and The Last of Us, to name a few. While missteps still happen too often due to not involving the queer community game developers wish to represent, generally, LGBTQIA+ representation has become more common, increasingly authentic, and less controversial.

There are fewer examples of transgender and non-binary characters in games. While fewer, it is a lot better than zero, which is basically where we started at the beginning of the decade — games are trending in the right direction with more visibility. There are some recent highlights (Dragon Age Inquisition, Tell Me Why, The Last of Us Part II), missteps (Mass Effect Andromeda, The Legend of Zelda: Breath of The Wild) and, arguably, total misses (Cyberpunk 2077).

It depends on the type of games you played growing up. For me, I grew up playing Street Fighter, Mortal Kombat, and Pokémon. These games (to me) had plenty of Asian characters and representation, and perhaps that’s why I was drawn to them.

But when I think about it, a lot of the male characters, even if their style was inspired by Asian cultures, looked very ‘Western’ or white. I would say this applies to the early Mortal Kombat games — characters like Scorpion, Sub-Zero, Raiden, or even female characters like Kitana.

"My dream for Tell Me Why is that it's a vehicle for discussing inclusive production practices and how they work."

I do not [think so]. Although in recent years, there has been a trend (especially in the indie space) of an increasing number of diverse content creators making titles that depict a more diverse range of experiences and viewpoints than the industry historically has. I find that the industry is geared towards a predominantly white and predominantly male player base.

While I am buoyed up by the success of recent games that champion diverse representation and inclusive production practices, I do believe there is much more established content creators — especially large studios — can do to move the industry forward. This includes things like intentionally broadening portfolio offerings to include more diverse stories, investing in opportunities for diverse content creators to get their products to market, and hiring practices, which actively strive to bring a more diverse set of humans together to create products.

Steve Saylor is a Canadian gamer who plays games with nystagmus, a vision condition in which the eyes make repetitive, uncontrolled movements. He’s on YouTube as Blind Gamer — Steve Saylor and Twitch as BlindGamerSteve

I think we’re getting there.

We’re kind of at the end of the beginning, I like to say.

Where we’re kind of at a point where definitely people are more aware of diversity in gaming, whether that’s for accessibility or people of colour or the LGBTQIA+ community.

People are aware of it now and I think just now we need to get to a point where other companies can be able to kind of be a little bit more diverse, but I think we’re starting to kind of see that. It’s not fully saturated with diversity as of yet, but it’s coming.

The video game industry has made some strides in the last few years in showcasing diversity, but still lags behind in comparison to other forms of entertainment.

Games like Spider-Man Miles Morales and Ghost of Tsushima are positive steps, but the fact remains that the vast majority of titles focus on white leads. This is especially true when you talk about AAA games. I can already tell you what this year’s Call of Duty game cover will look like. It will feature a beefed-up military white male holding an overly large weapon.

In comparison books, movies, television, and video-on-demand services have been more open in showcasing diverse leads and characters.

Anita Mortaloni is the director of Accessibility at Xbox

Similar to accessibility, this is a space where there is never enough and there will always be more work to be done. There will always be opportunities to make the gaming ecosystem better represent the diversity of our community. It’s important to us that players can feel authentically represented in games. We’re on a journey and we’re committed to providing a platform where everyone can see themselves as the hero.

This week's schedule includes 1) THE FINALE OF OUTRIDERS STORY, 2) more of Dead Cells, wow I LOVE it! and 3) a giveaway of 3 mobile game codes for Northgard, a viking strategy game that we'll be doing a first impressions stream with!

I'll see you by the campfire! Link below: pic.twitter.com/3xH3Seq2aU

It certainly has improved, but I think it’s also good to strive for more. So “enough” is kind of a hard target to reach.

Overall, I think it’s always good to drive for more diversity. As much as we’ve made progress, there’s still a lot of progress to be made.

Steve Spohn, is the COO of Able Gamers and has Spinal Muscular Atrophy. He believes that when minds are willing and bodies are unable, video games still allow people to access a world that would otherwise not be accessible. Steve Spohn streams on the Twitch as SteveInSpawn

My main concern is always ‘disability,’ and there is still a significant work of disability representation in video games, particularly stemming from the norms that society has put forth.

For example, when you see a bad guy, normally, you will see either a disfigurement or disability or quite often the protagonist is fighting against a villain who is mad at the world because the world wronged them by making them disabled. Like a core of [a] movie is they’re just angry that they’re disabled.

And you know the core theme for a video game is that, if the world had been kinder to them and their disability and understood them, then they wouldn’t have had to go and, you know, nuke the planet or whatever. So, you know, that’s something that I feel like video games still have a ways to go on.

I think there are instances where this is better. And this is done in a more respectful way. For example, Overwatch is really good with bringing in characters who are disabled and sort of just, making them part of the lore and part of the universe.

Then you have other games that still continue to associate wheelchairs with being insane, and it’s something that we need to continue to work on to be respectful of a number of different ways.

Dylan Zaner, is an LGBTQ Twitch partner and YouTube streamer who goes by 8BitDylan

I’ll give credit where credit is due in that we have seen a lot more representation of underrepresented groups in video games within the last five years, but we still have a long ways to go to make it commonplace.

We are still in an era where seeing a Black woman in a leading role or having meaningful trans representation in a game is rare. I do think we will get there and some of the upcoming battles we are seeing in this are in making sure character customization in games reflects all communities who are playing the game, whether this is in skin tones or pronouns.

Where to find & support your local Cypher 🏳️‍🌈 ⚔️😁

Games still have a long, long way to go. Even if games are inclusive, the way some gamers act when we get a Black woman lead (see Forspoken) or any non-white dude lead and folks act like they are forced to change.

The interview answers have been edited for style, clarity and length.

The next part of the series asks the question, “Why do you feel like we need more diversity in video games/why is it important for diversity to be in video games?” If you are part of the LGBTQ+, BIPOC, or disabled communities and would like to be a part of this series please email dean@mobilesyrup.com.