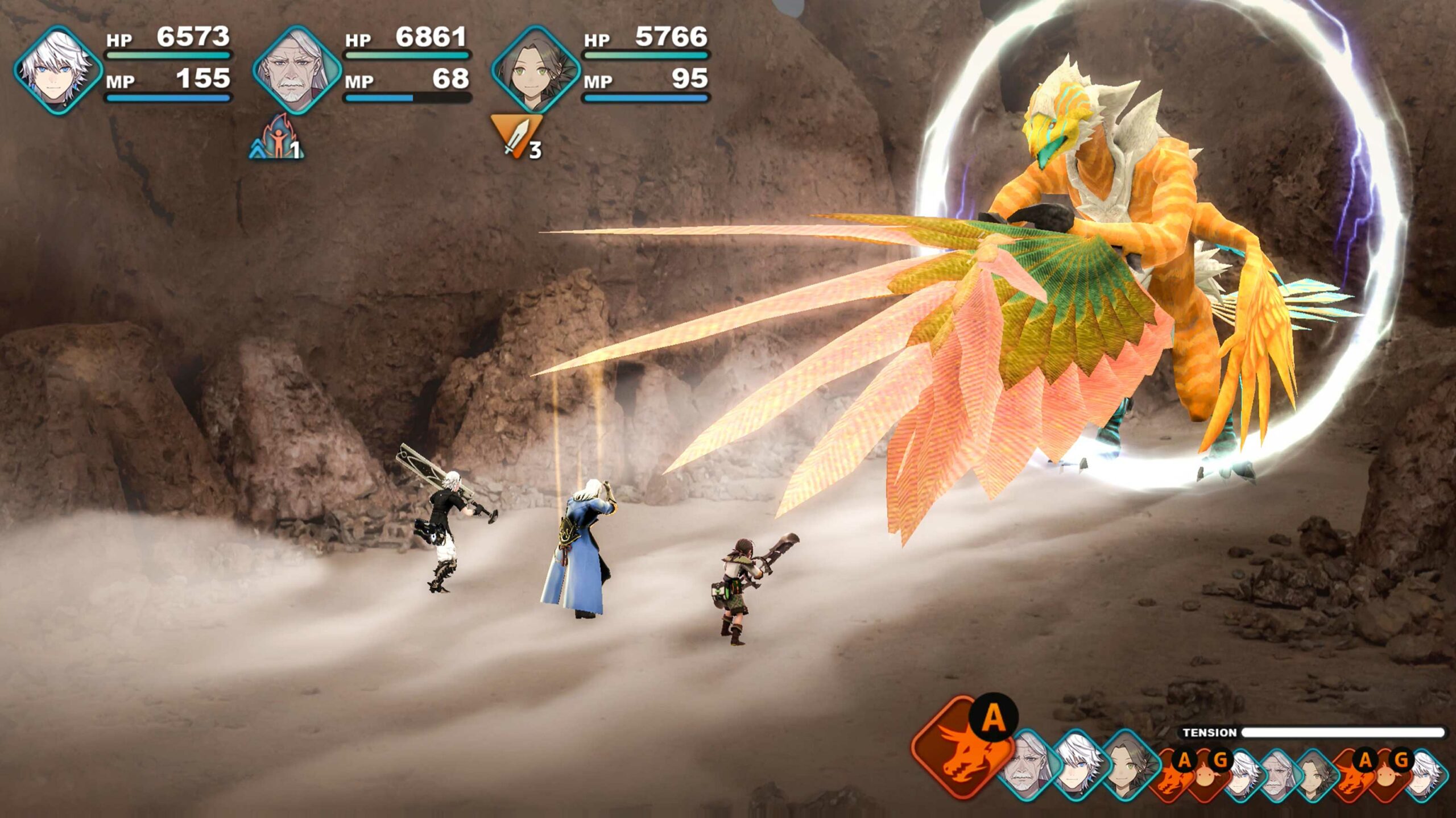 Over the past several years, it’s become quite common for a prolific Japanese developer to leave a major company to create a “spiritual successor” of sorts to the games that made them famous.

However, this trend has yielded mixed results so far. For every success story like Koji Igarashi’s Castlevania- inspired Bloodstained or Devil May Cry creator Hideki Kamiya’s Bayonetta, you have such major disappointments as Mega Man designer Keiji Inafune’s Mighty No. 9 or, most recently, Sonic the Hedgehog co-creator Yuji Naka’s Balan Wonderworld.

Thankfully, the latest game from legendary RPG designer Hironobu Sakaguchi, Fantasian, falls very much in the former camp. By paying loving tribute to the Final Fantasy creator and Chrono Trigger co-creator’s previous works, while at the same time bringing some smart innovations to the table, Sakaguchi’s studio Mistwalker has delivered a great JRPG that feels both nostalgically familiar and excitingly fresh.

Although a full verdict will have to wait until the Apple Arcade game’s second and final part releases later this year, Sakaguchi has already won over this lifelong fan of the genre.

At first glance, Fantasian might seem rather derivative. The story places an amnesiac protagonist named Leo at the centre of a multi-dimensional conflict between machines and humans, the gameplay revolves around turn-based combat and random encounters, and you’ll even ride on an extravagant airship early on. 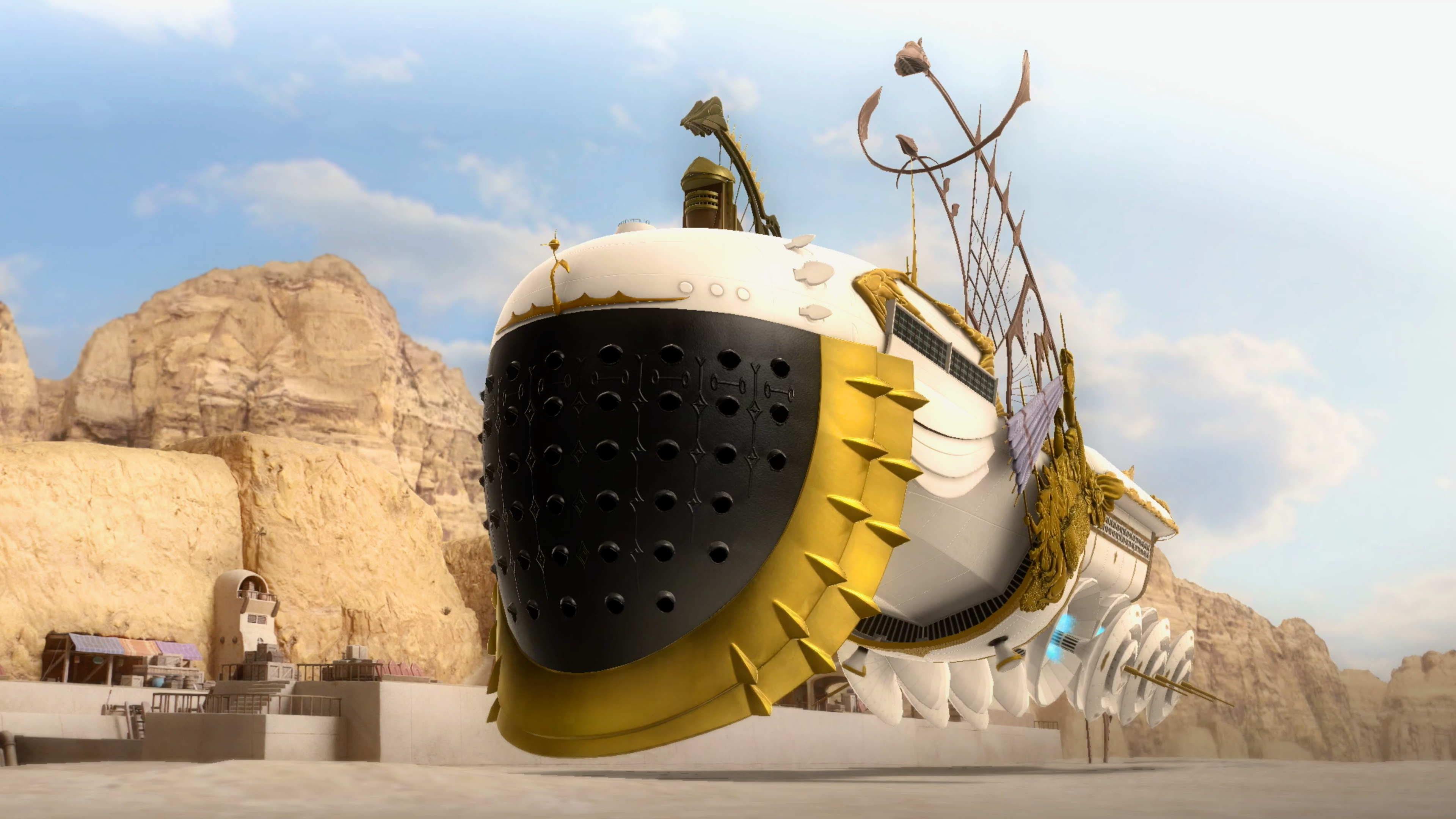 Even more casual players of Sakaguchi’s older games are likely to catch that characters named ‘Sid’ and ‘Garland’ and a ‘Phoenix’ item being used to revive downed party members are not-so-subtle nods to Final Fantasy. Fantasian is very traditional in this sense, but therein lies a good deal of its charm.

But Sakaguchi — who penned the game’s story and oversaw the rest of its development — is careful not to rely solely on fanservice. Instead, he uses these tropes to weave an engaging tale about the balance of “chaos” and “order” and the unwitting heroes who get caught in the middle. While the dialogue itself might not be terribly original, the characters prove to be quite likable and grew on me over time.

“Impressively, Mistwalker has gone to the trouble of producing more than 150 physical models filled with incredible amounts of detail and scanned them into the game.”

Learning more about Leo’s past by following the interdimensional exploits of his enigmatic father kept me intrigued, while the tragic backstories Princess Cheryl and the Queendom of Vibra and the mysterious Kina added a powerful emotional hook. All the while, Sakaguchi maintains the whimsy of the older FF games through fun bickering between the characters, like the Uzra airship captain Zinikr constantly butting heads with the disrespectful-yet-genius orphan Ez. 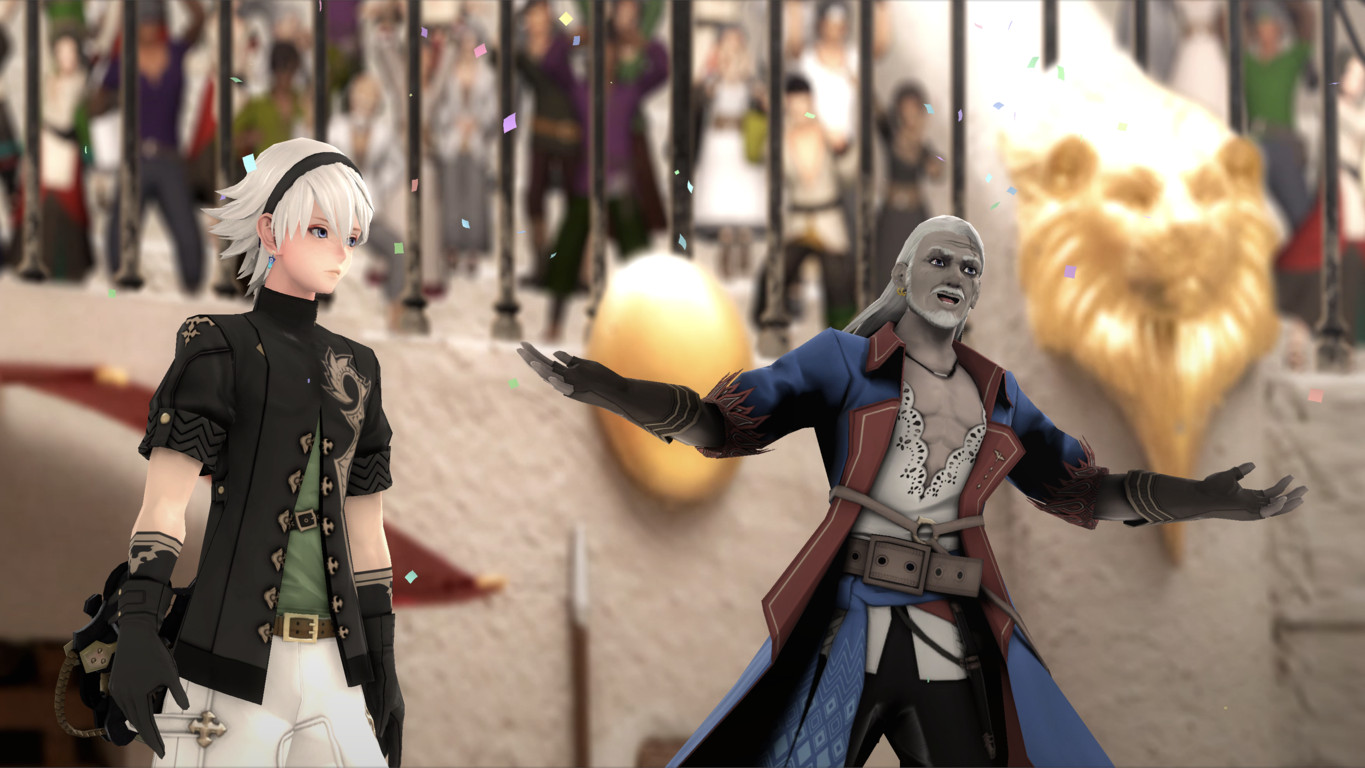 The world of Fantasian is also fleshed out through beautiful hand-drawn vignettes that offer a nice change of pace from traditional cutscenes while allowing the music of famed composer Nobuo Uematsu — Sakaguchi’s friend and longtime Final Fantasy collaborator — to really shine through. Overall, the legendary musician’s work here is outstanding and, surprisingly, even experimental, mixing the likes of rock, piano and synth with such distinct sounds as an internet dial-up connection to convey the mood of an alternate dimension robot-filled factory.

While Fantasian‘s otherwise solid story and characters don’t necessarily tread new ground for RPGs, Mistwalker has done a commendable job distinguishing the game in a number of other key ways.

The most apparent of these is Fantasian‘s absolutely gorgeous aesthetic, which blends well-designed HD character models with actual intricate real-world dioramas. Impressively, Mistwalker has gone to the trouble of producing more than 150 physical models filled with incredible amounts of detail and scanned them into the game. It’s a striking and wholly original visual style that reminds me of the awe I had as a kid while running through the towering pre-rendered environments of Sakaguchi’s Final Fantasy VII on the original PlayStation. 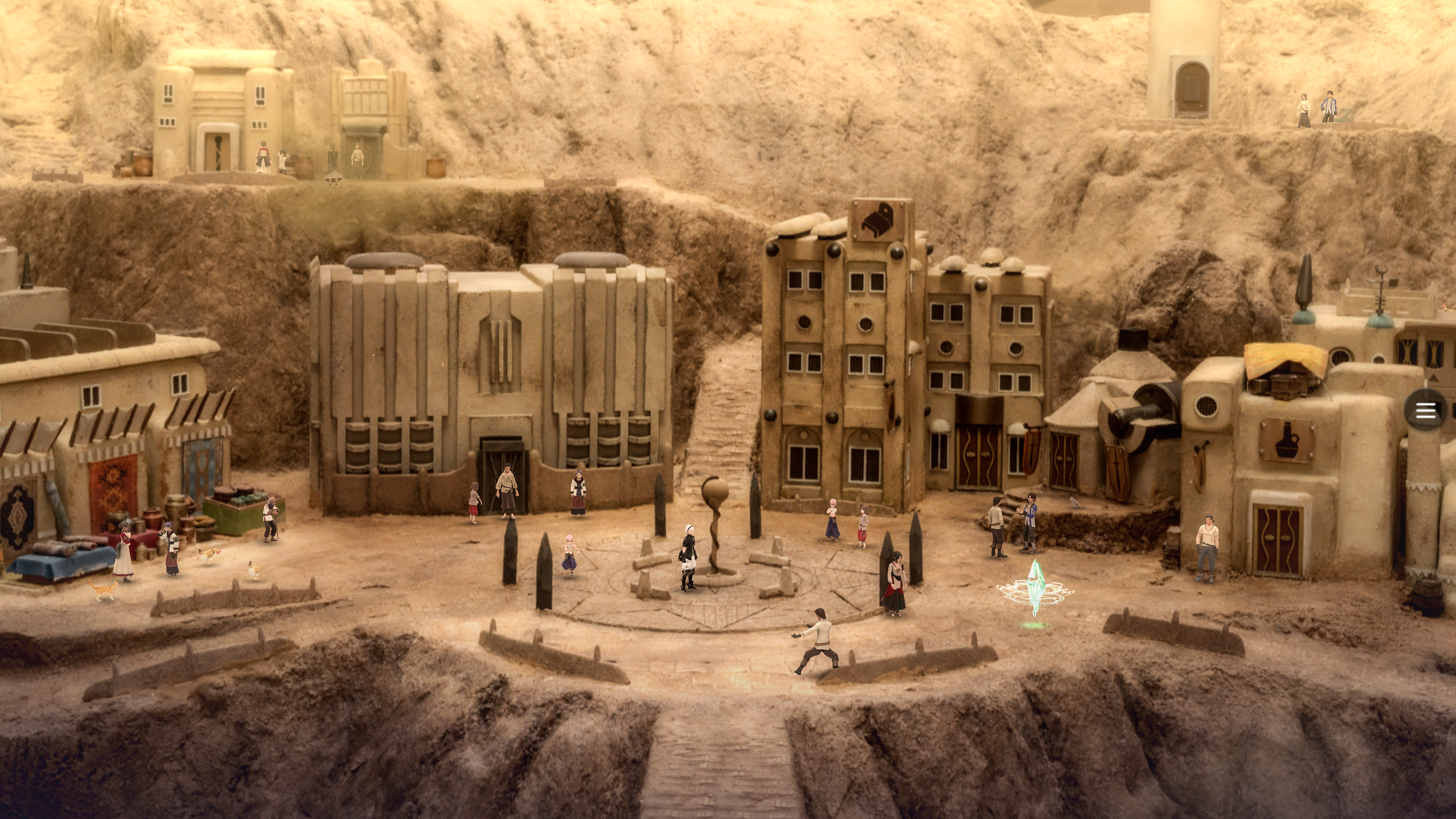 In fact, Fantasian actually gave me a unique sense of immersion unlike any I’ve felt before in a game thanks to the world being grounded by these tangible, so-real-you-could-almost-feel-them backgrounds. As a nice touch, Mistwalker has also added a ‘pin’ system that lets you tap where you want your character to go. This at once makes navigation easier on mobile devices while also letting you take a moment to lean back and truly soak in the beautiful vistas and engrossing score.

Beyond that, though, Mistwalker has taken care to shake up genre conventions and add some much-needed nuance to tried-and-true gameplay mechanics. As someone who has played many JRPGs, I certainly have a bit of a love-hate relationship with random encounters. On the one hand, they can keep things feeling dynamic and surprising, but they also can often feel grating and repetitive.

In Fantasian, Mistwalker has made the absolutely brilliant decision to give you control over when random encounters can happen. Enter the ‘Dimengeon’ system (a mix of “dimension” and “dungeon”), which lets you banish enemies you would have otherwise had to fight to another realm to battle all at once later on.

It’s a remarkably finely-tuned mechanic, as you can initially only ‘Dimengeon’ a pre-set number of enemies before it’s at full capacity and you are forced to fight them all. Further, any new enemies you haven’t encountered still need to be fought once even when Dimengeon is turned on, after which time they’ll be automatically sent away like any other previously met foe.

On the flip side, being able to toggle the Dimengeon device at will gives you the very welcome freedom of exploring the world at your own pace. What’s more, the Dimengeon system adds a rewarding strategy element to combat that isn’t found in standard encounters, which can usually just be cleared by a few basic attacks or spells.

In Dimengeon battles, though, you’ll be facing up to 30 enemies (which come in waves), so you have to be much more thoughtful, especially where MP is concerned. This is where Fantasian‘s other signature gameplay mechanic — the ability to curve certain moves — really comes in. If you play your cards right, you can hit multiple enemies at once depending on how you arc your attack. It also feels incredibly intuitive on a touchscreen like an iPhone or when using a mouse/trackpad. 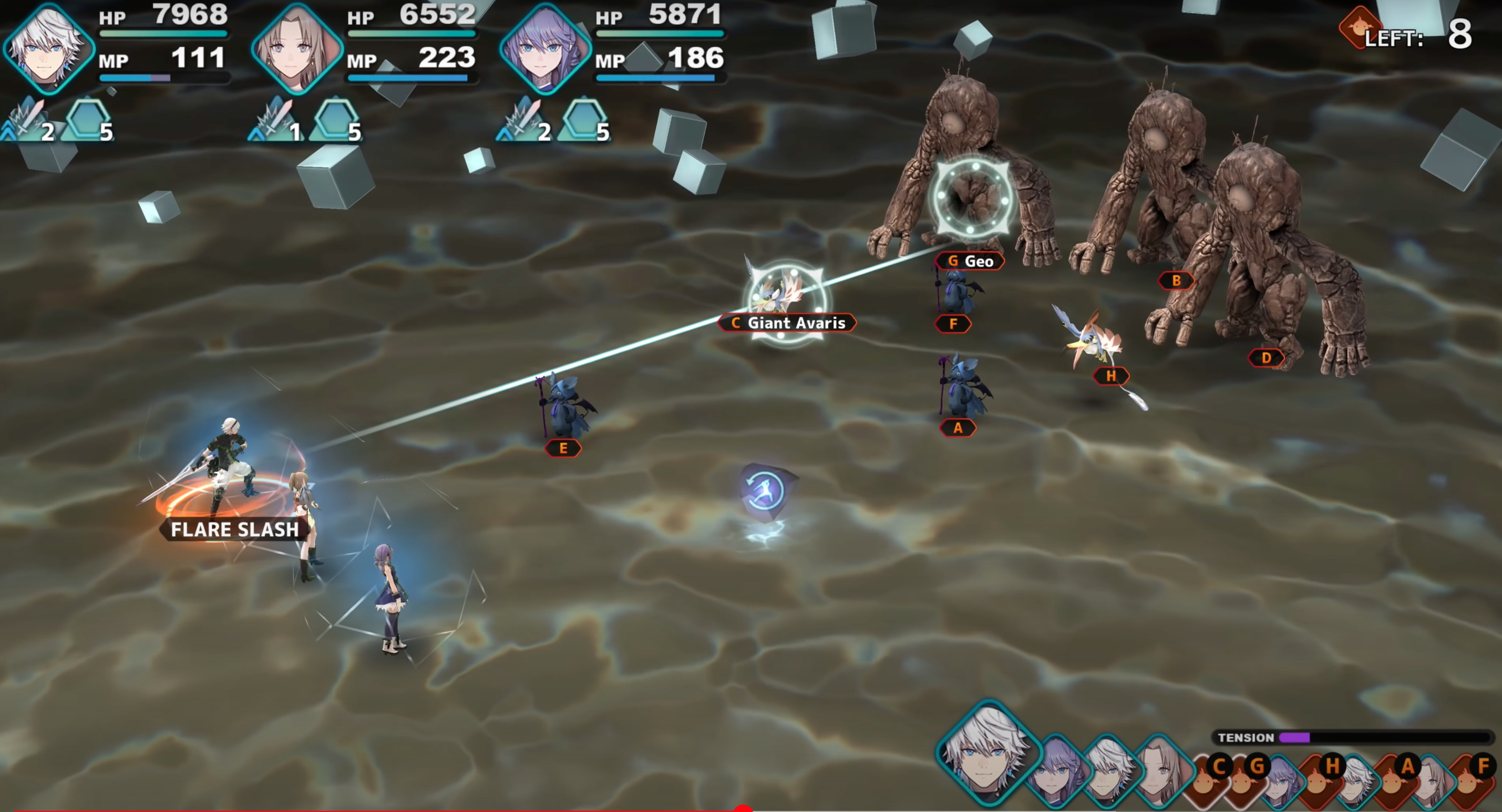 Balancing this out, however, is the fact that rows of enemies might contain an assortment of monsters with different elemental weaknesses, while other creatures might be able to put up a wall that prevents you from hitting those directly behind them. Meanwhile, Dimengeon battles occasionally spawn power-ups that boost your attack power or even give you a second turn.

With all of this in mind, you’ll want to be thoughtful in launching your attacks. Spatial awareness is key to being efficient in battle, and it was always deeply satisfying to wipe out four or five enemies in one fell swoop with a well-placed curved Holy spell from Kina, or using Ez’s throwable double-edged sword to hit one group before moving onto a second. Play your cards right and you even hit multiple Lightning-vulnerable enemies with a single bolt, letting you maximize damage while minimizing MP consumption.

“While it remains to be seen how well Part Two will stick the landing, the many strengths of the first entry have me eager to see how it all pans out.”

You also net a lot more XP when defeating these groups, which makes progression feel more meaningful as opposed to the more piecemeal gains that you’d get through more numerous smaller-scale fights.

The “Part Two” of it all

The only real major shortcoming to Fantasian lies in its conclusion. While I’m not opposed to splitting up an RPG into two parts (especially when they can run for dozens of hours), Fantasian‘s first half comes to a rather abrupt and awkward ending. Plot developments and a key new gameplay mechanic are introduced at the last minute, while a marked difficulty spike kicks in with the final two bosses — all of which makes the finale feel disappointingly disjointed and frustrating. Likewise, Vam, the villain of Fantasian, is also a rather generic world-conquering threat in Part One, even by the end of the nearly 20-hour journey. Hopefully, Part Two does a better job handling all of these threads. 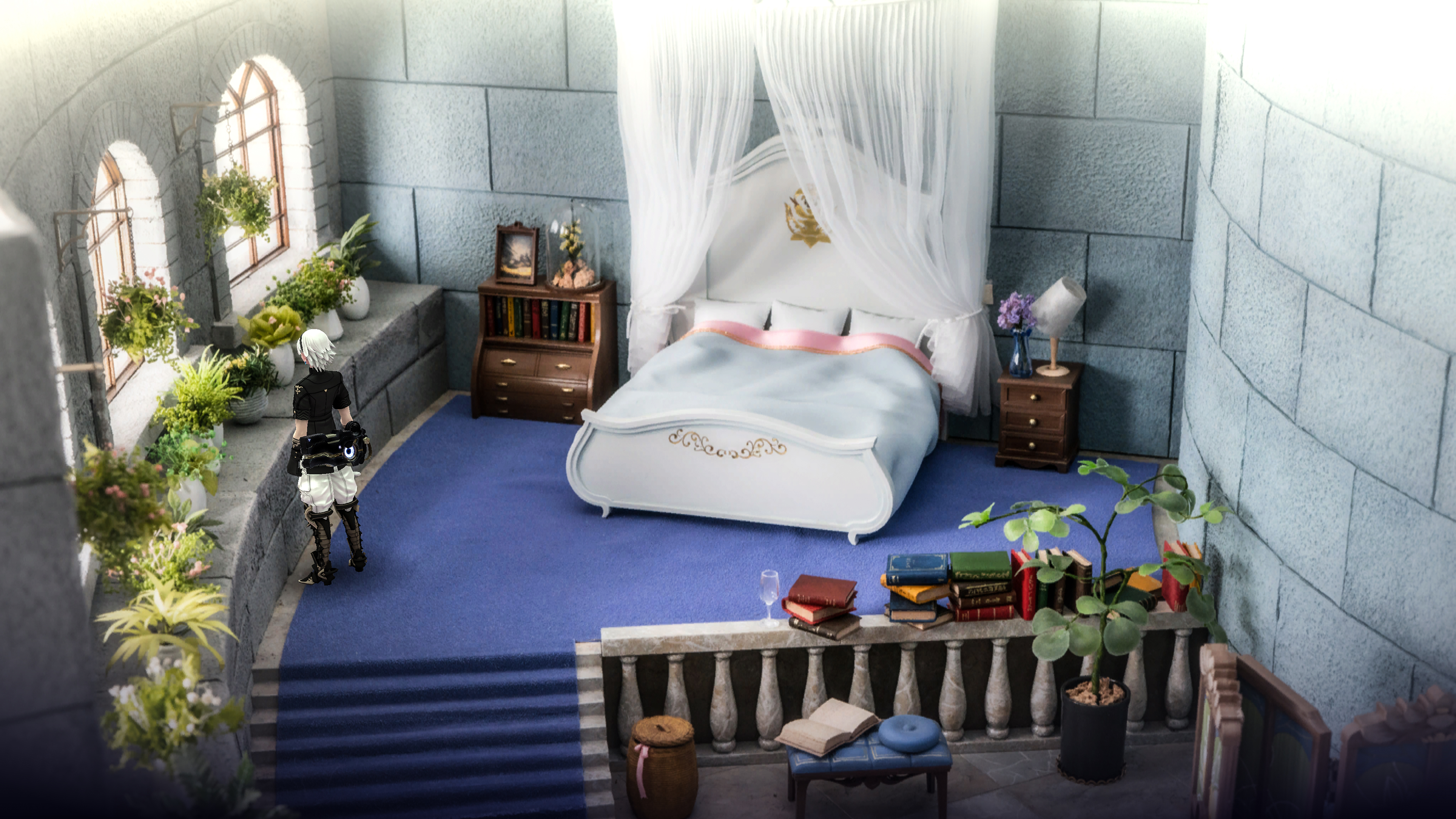 On the other hand, Mistwalker has confirmed that the second part will adopt a more quest-based, free-roam structure. This is certainly very tantalizing, as Fantasian is overall quite linear outside of a few largely trite sidequests here and there. The game already features an incredibly handy fast travel mechanic that lets you instantly warp to virtually any previous points of interest, so I’m looking forward to making better use of it once more quests open up. The promise of potentially exploring Fantasian‘s world map with an airship is especially exciting since recent numbered Final Fantasy games — barring XV, which itself suffered from an uninteresting open-world — have forgone such mechanics.

Sakaguchi’s return to his roots so far has been nearly everything a JRPG veteran like me could have asked for. With a charming cast of characters, intriguing world, sublime visuals and music and some genuinely clever spins on traditional turn-based combat, Fantasian feels right at home with the beloved Final Fantasy games of yesteryear.

While it remains to be seen how well Part Two will stick the landing, the many strengths of the first entry have me eager to see how it all pans out. Whether you’re a JRPG fanatic or a relative newcomer to the genre, Fantasian is a wonderful experience that’s absolutely worth your time.

Fantasian (Part One) is now available on Apple Arcade, which costs $5.99 CAD/month and can be accessed on iPhone, iPad, Mac and Apple TV.

For more on Fantasian, check out my recent interview with Sakaguchi.