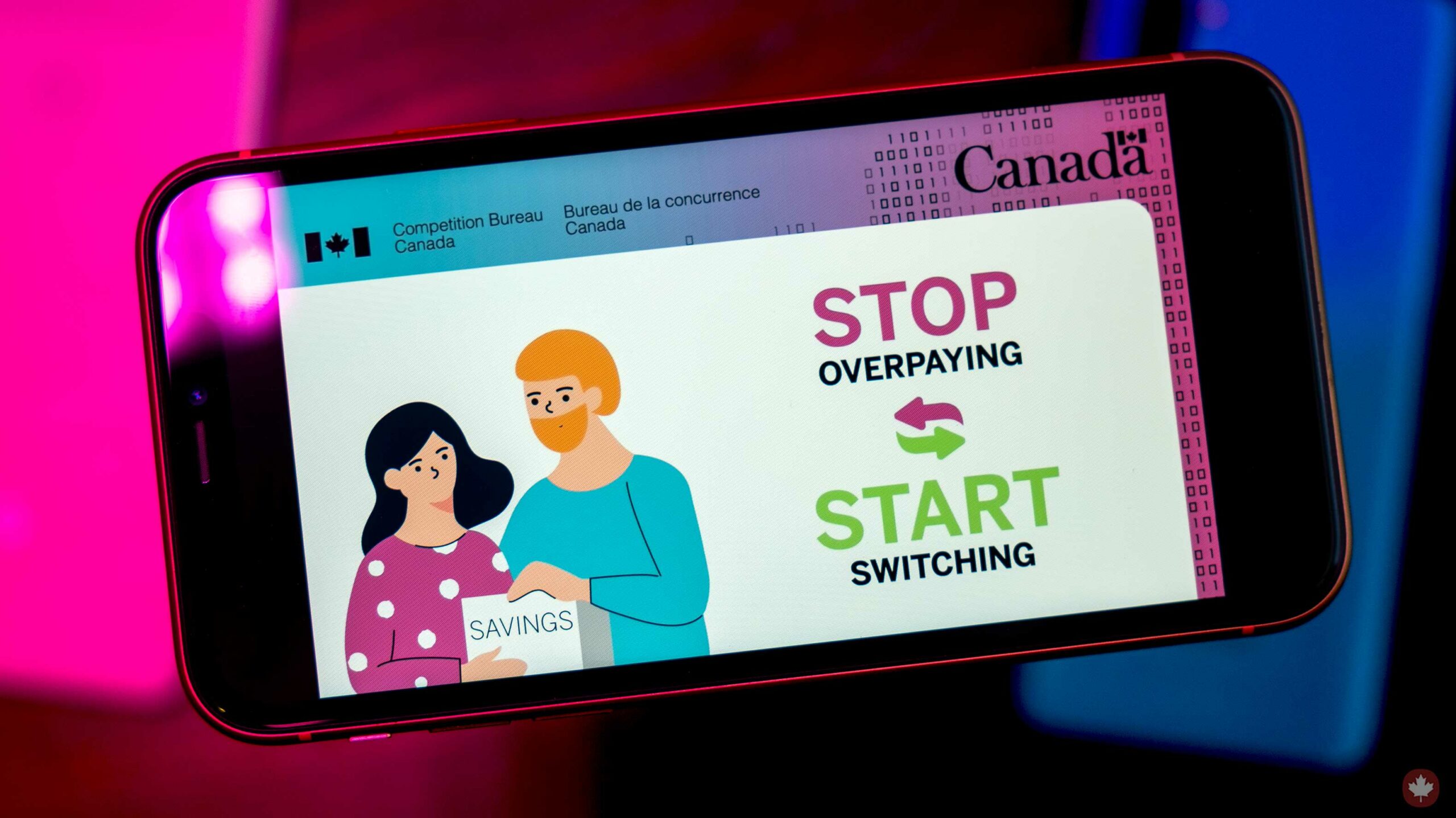 The Competition Bureau has launched a ‘Switch Week’ campaign to encourage Canadians to switch their service providers to save money.

The bureau says that by switching your telecom, insurance and banking providers or renegotiating your contracts, you can take advantage of competition to lower your monthly bills.

Anthony Durocher, deputy commissioner at the Competition Bureau, told MobileSyrup in an interview that the goal of the one-week awareness campaign is to “essentially inform Canadians about potential savings.”

The campaign outlines that Canadians could be overpaying around $1,860 per year by sticking with their telecom, banking and insurance plans combined. It notes that in the past year, one in four Canadians surveyed renegotiated their contracts or switched providers to take advantage of better deals and services.

#DYK you could be #overpaying around $240 a year for your cell phone plan?

In the past year, 1 in 3 Canadians switched cell phone providers or renegotiated their contracts.

Data released by the bureau shows that the median estimated annual savings from switching providers or renegotiating contracts is $240 for cell phone services, $360 for TV services and $300 for internet plans.

Some Canadians have taken to social media to critique the campaign and say the reason people are overpaying is because there aren’t enough measures to prevent anti-competitive behaviour and not because Canadians aren’t switching providers.

In response to this, Durocher said the bureau has a mandate to enforce the Competition Act and that if the bureau finds anti-competitive conduct, it would investigate and take the appropriate action.

“We also have a mandate to promote competition, which we do in the telecom space with the CRTC by intervening processes and advocating for greater competition. But this campaign is largely rooted in consumer awareness and speaking directly to consumers to showcase the benefits of switching as well,” he stated.

Durocher outlined that survey data showed that the majority of respondents who didn’t switch providers in the past year didn’t know the types of saving they could achieve.

Tips and steps to take when switching providers

“We’ve presented five easy steps for consumers to follow. The first one is to pick a date to switch, and this can be different for different people. Ultimately, good practice here might be, shortly before a contract is expiring, to research to decide who to switch to or to leverage deals out there,” Durocher stated.

The second step is to review your current service plan and monthly bills to see what’s included and how much you’re paying. The bureau says that consumers should compare their current services to other offers available in the market. 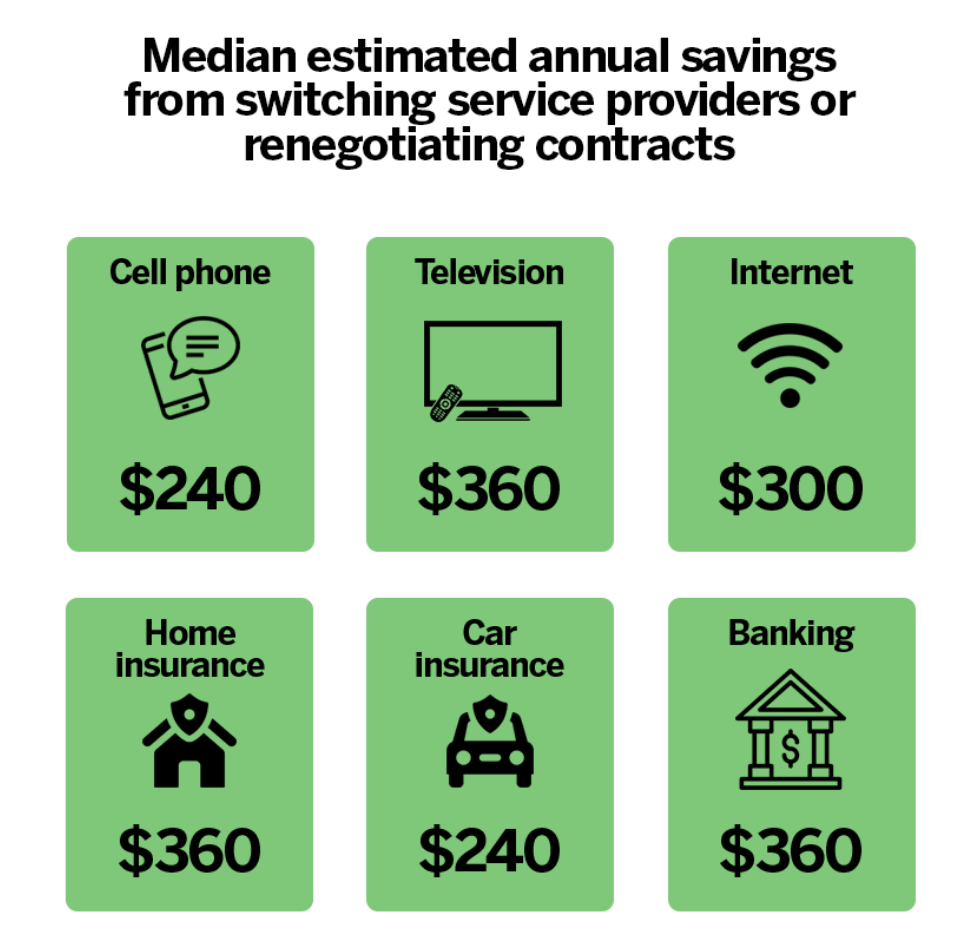 Thirdly, the bureau outlines that you should make the switch if you have found a better offer. However, if you prefer to stay with your current provider, you can use the offer to renegotiate your contract. The bureau says that negotiating your contract does in fact work, as 7 in 10 Canadians surveyed got a better deal after they told their cell phone provider that they might switch.

“Before you set up a new service, familiarize yourself with the deadlines for cancelling your existing services, including when your billing cycle ends,” the bureau outlines in the fourth step.

You should make sure to read all the fine print before signing a new contract to confirm what services are included, the associated fees and the contract term. Lastly, the bureau says that consumers should set a reminder to evaluate their services. It notes that prices are always changing and that what’s considered a good deal one year may not be in the next.

“Annual reminders synchronized with your billing cycles will help you plan ahead and remember deadlines for cancelling services. This can help to ensure that your services continue to meet your needs, at a fair market price,” the bureau notes.

Think switching is a hassle? Think again! 8 in 10 Canadians surveyed who switched cell phone providers thought it was easy. ✅

Your new provider may even be able to transfer your services for you.

When asked about why the bureau decided to launch the campaign now, Durocher stated that this is a time where affordability is a big issue for all consumers and that people are looking for ways to save money or get better services.

“I think that the campaign is timely in that respect. But ultimately, this is rooted in building awareness for the benefits of leveraging competition for the consumer,” he said.

Durocher said the Competition Bureau plans to make this campaign a yearly initiative and that more data and testimonials will advance future campaigns.

“We’re anxious to see how the campaign works out over the next few days. The feedback that we get and data is important to incentivize people to put in the time and effort to do this,” he outlined.

The campaign outlines that switching providers is easier than you think and that depending on the type of service, your new provider may even be able to transfer your services for you.