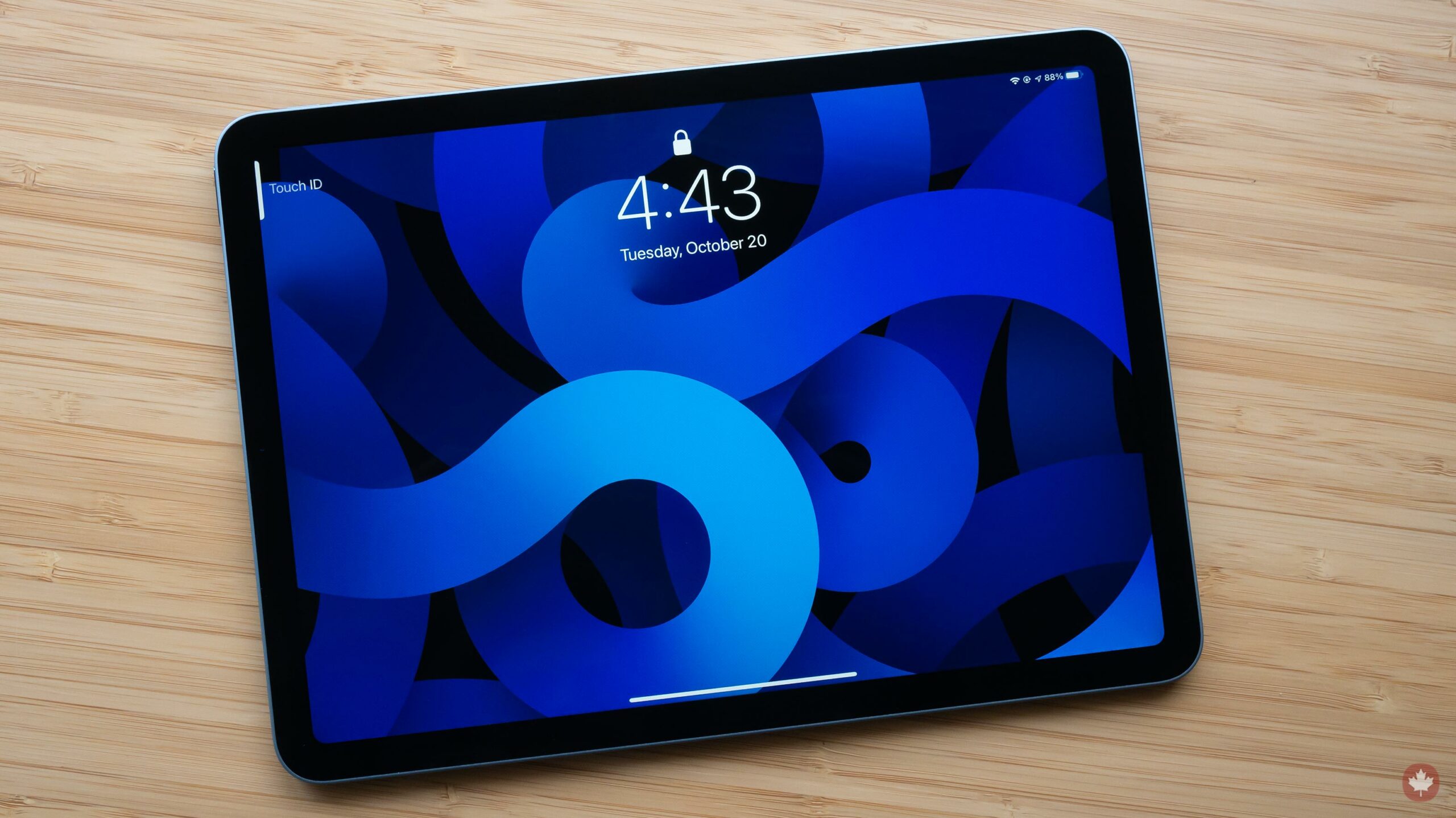 The iPad Air (2020) is my favourite iPad and the tablet most people should buy if they’re looking to make the jump from a traditional laptop to Apple’s increasingly capable iPadOS.

It features the best aspects of the pricey iPad Pro (2020) combined with the entry-level iPad (2020). Further, the squared-off edged design looks great in ‘Silver,’ ‘Space Grey,’ ‘Rose Gold, ‘Sky Blue,’ and — my personal favourite hue — ‘Green,’ setting the new tablet apart from its predecessor and even the iPad Pro. 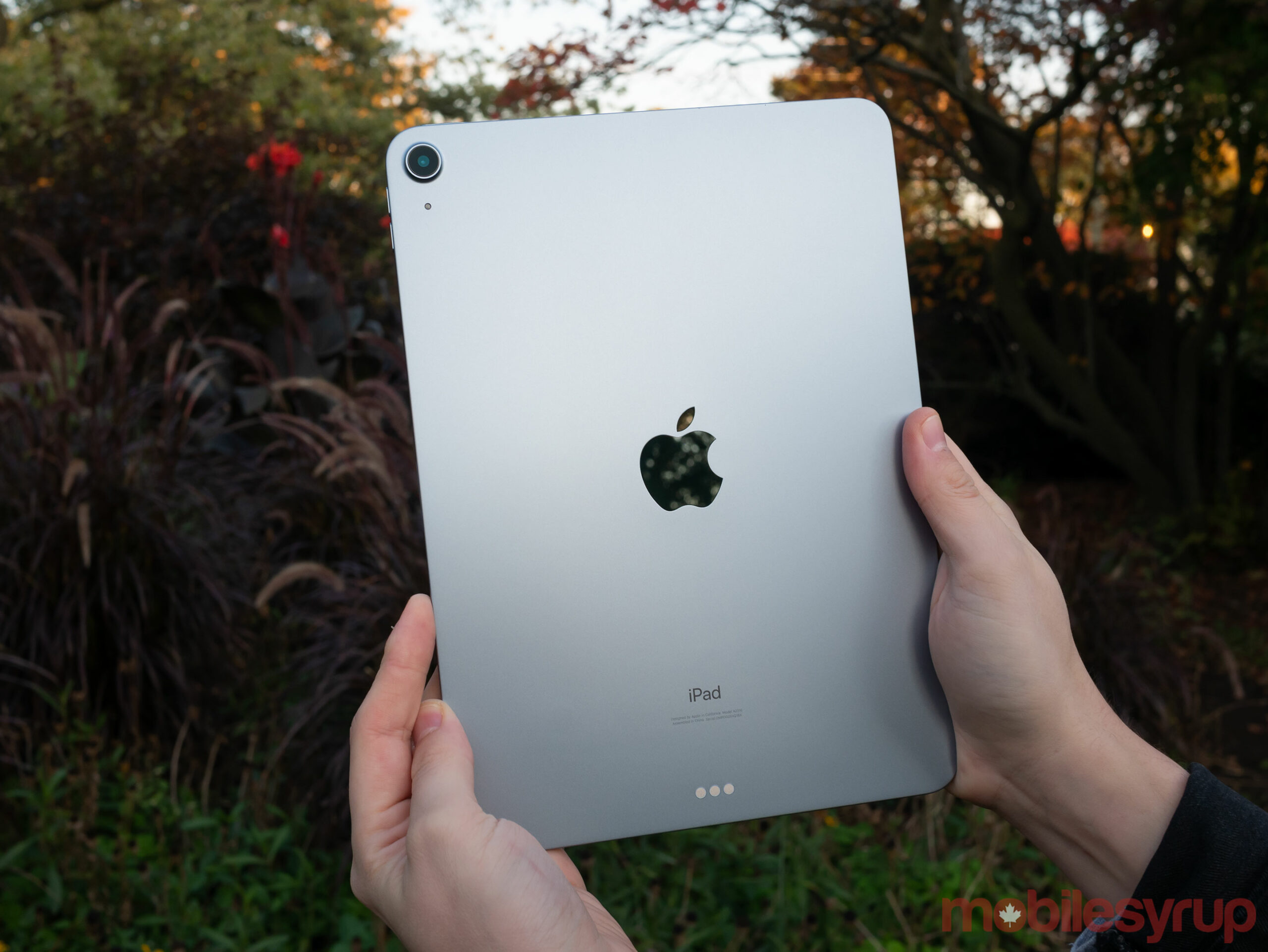 Other features have been brought over to the entirely redesigned Air as well, including a much-needed USB-C port that is great for transferring photos from an SD card onto the tablet to edit, the iPhone 12’s A14 Bionic chip, 2nd-generation Apple Pencil support and more.

Though I’ve only spent a few days with the iPad Air (2020) so far, it seems to be Apple’s iPad model that cuts out some of the high-end iPad Pro’s less popular features to hit a lower price point.

That said, the new Air makes the overall iPad line a little more confusing given how close this latest tablet is to the standard iPad Pro in several ways.

A dash of colour 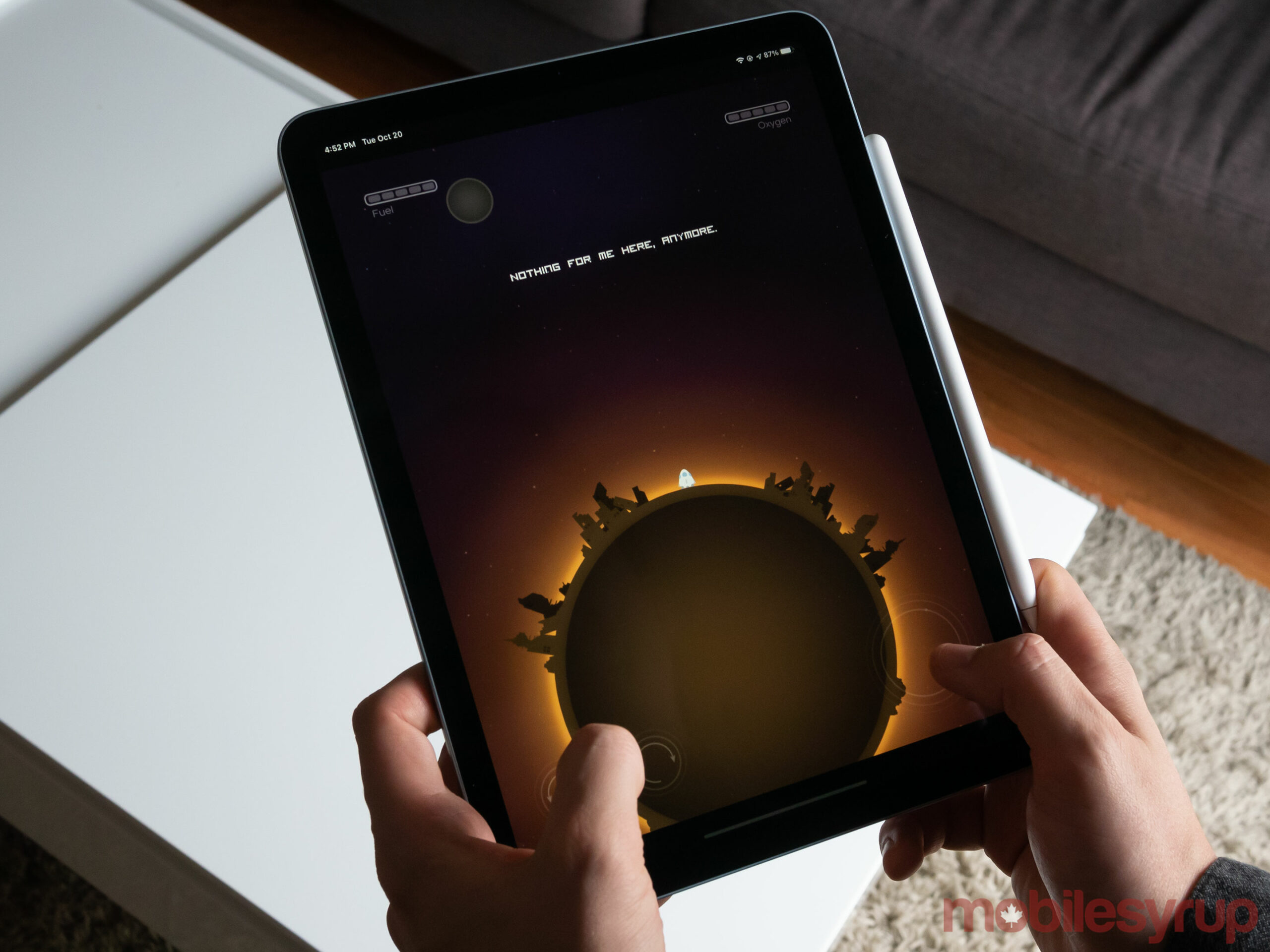 I’ve always been fond of tech devices that are colourful because they add a unique flair to the product. Apple’s new iPad Air fits this description perfectly.

The rest of the iPad Air design is nearly identical to the iPad Pro, with the only exception being its smaller camera bump, given it only features a single five-element 12-megapixel wide camera and not a 12-megapixel wide and 10-megapixel ultrawide shooter like the iPad Pro (2020). The camera’s performance is decent and matches the iPad Pro’s primary shooter. Still, beyond the occasional photo, it’s unlikely many people will be doing mobile photography with a tablet of this size. The iPad Air’s front-facing camera comes in at 7-megapixels. 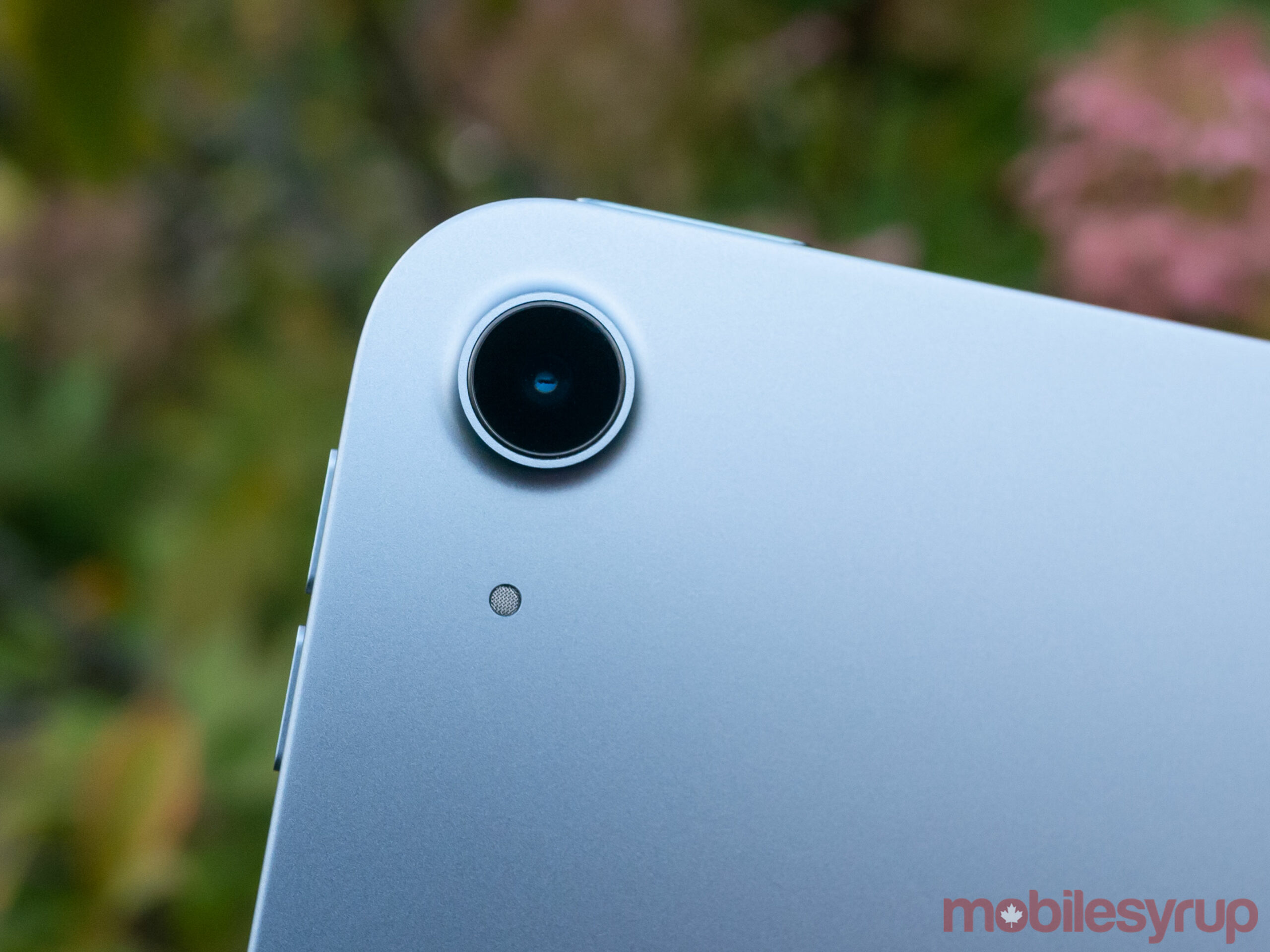 The iPad Air (2020) feels substantial in your hand, though it does weigh slightly less than the iPad Pro. Thankfully, the new iPad Air’s sides are aluminum, just like the iPhone 12. This means they’re grease-resistant, unlike the iPhone 12 Pro’s stainless steel edges.

Finally, there’s no notch on the Air, but it does feature a new form of Touch ID instead of Face ID like its more expensive counterpart (more on this later).

In general, I’m fond of the throwback design direction Apple has been moving in with the release of the iPad Pro (2020) and the new iPhone 12 series, and think it’s a great new look for the tech giant’s products.

iPad Air vs the iPad Pro 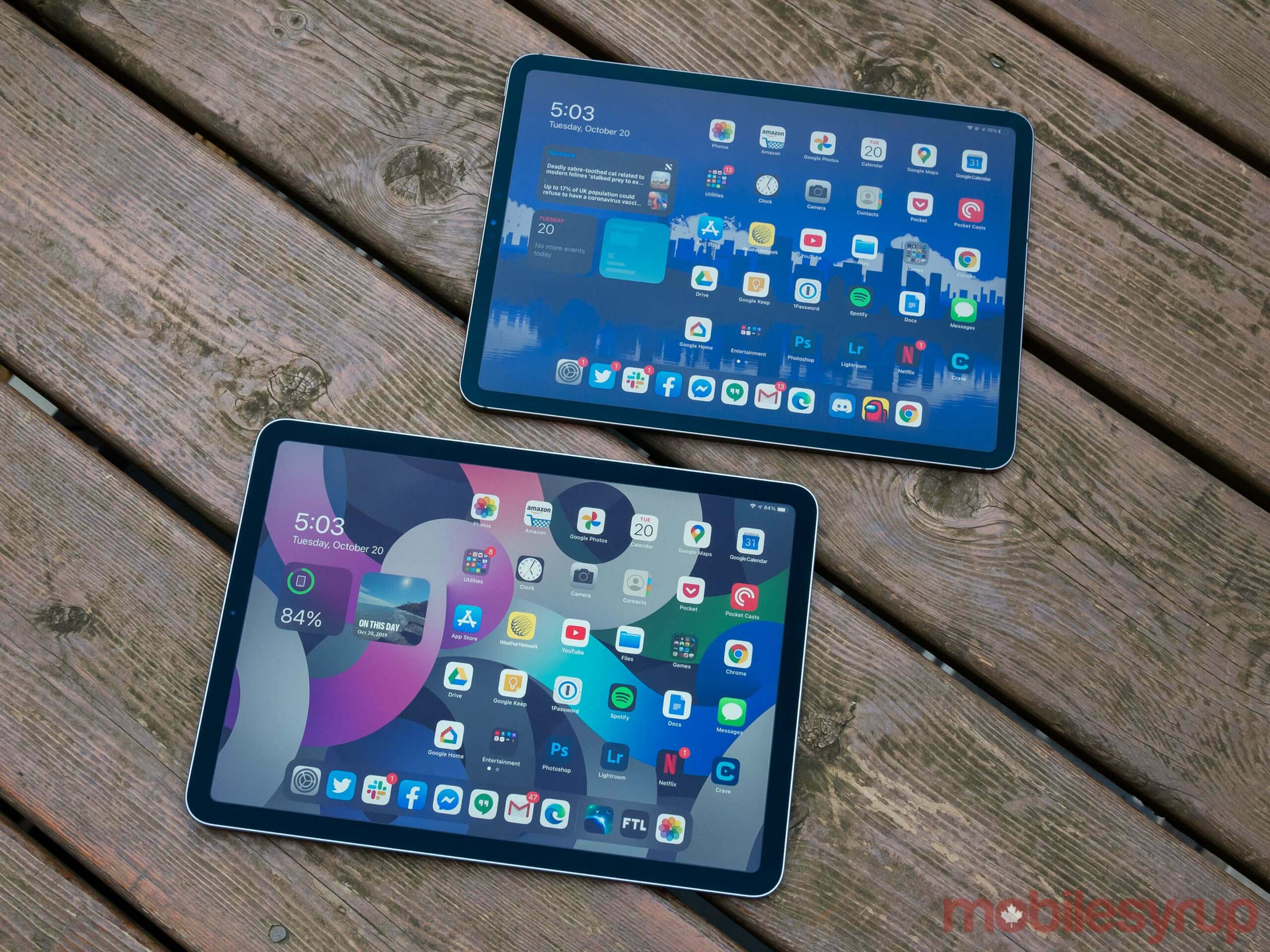 The iPad Air adds confusion to Apple’s already bloated iPad line, as it features a 5Gbps USB-C port, a more powerful A14 processor compared to the A12Z chip that launched alongside the iPad Pro 2020 this year, and even measures in at nearly the same size.

Both devices feature Liquid Retina LED-backlit displays, with the iPad Pro’s screen measuring in at 11 inches and the iPad Air’s panel coming in with the same display technology at 10.9 inches. Given the minor display size difference, the Pro features a 2,388 x 1,668 resolution, with the Air featuring a 2,360 x 1,640 pixel resolution screen.

Both displays look nearly identical, though the iPad Pro can hit 600 nits at max brightness and the iPad Air tops at 500 nits. In practice, this difference in brightness isn’t noticeable at all. 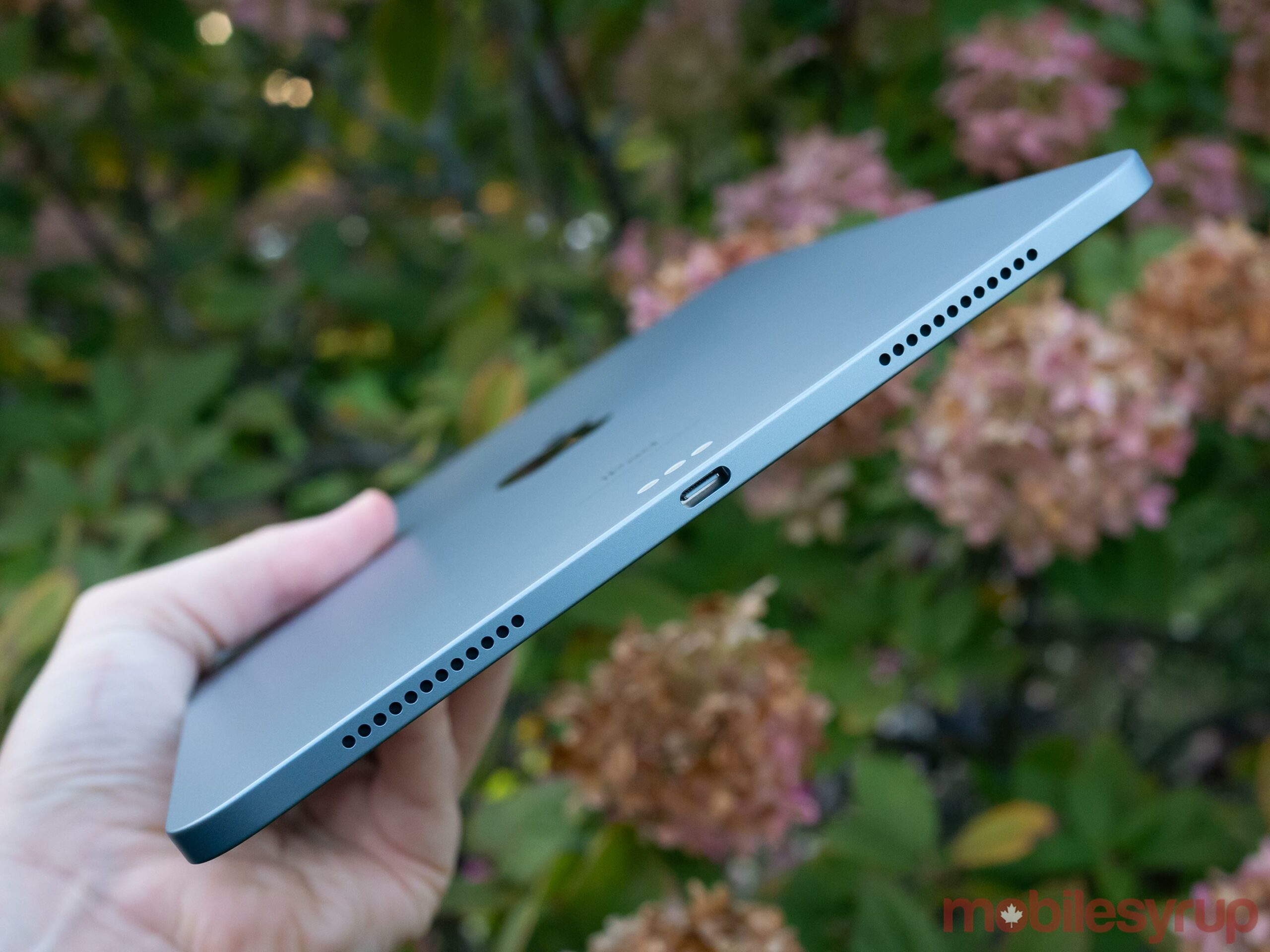 With ProMotion being the only major missing feature, the iPad Air screen looks and performs identically to the iPad Pro’s, which is impressive given its cheaper price tag. ProMotion is Apple’s display technology that gives the iPad Pro’s panel a 120Hz refresh rate for smoother scrolling, animations and usage with the Apple Pencil. 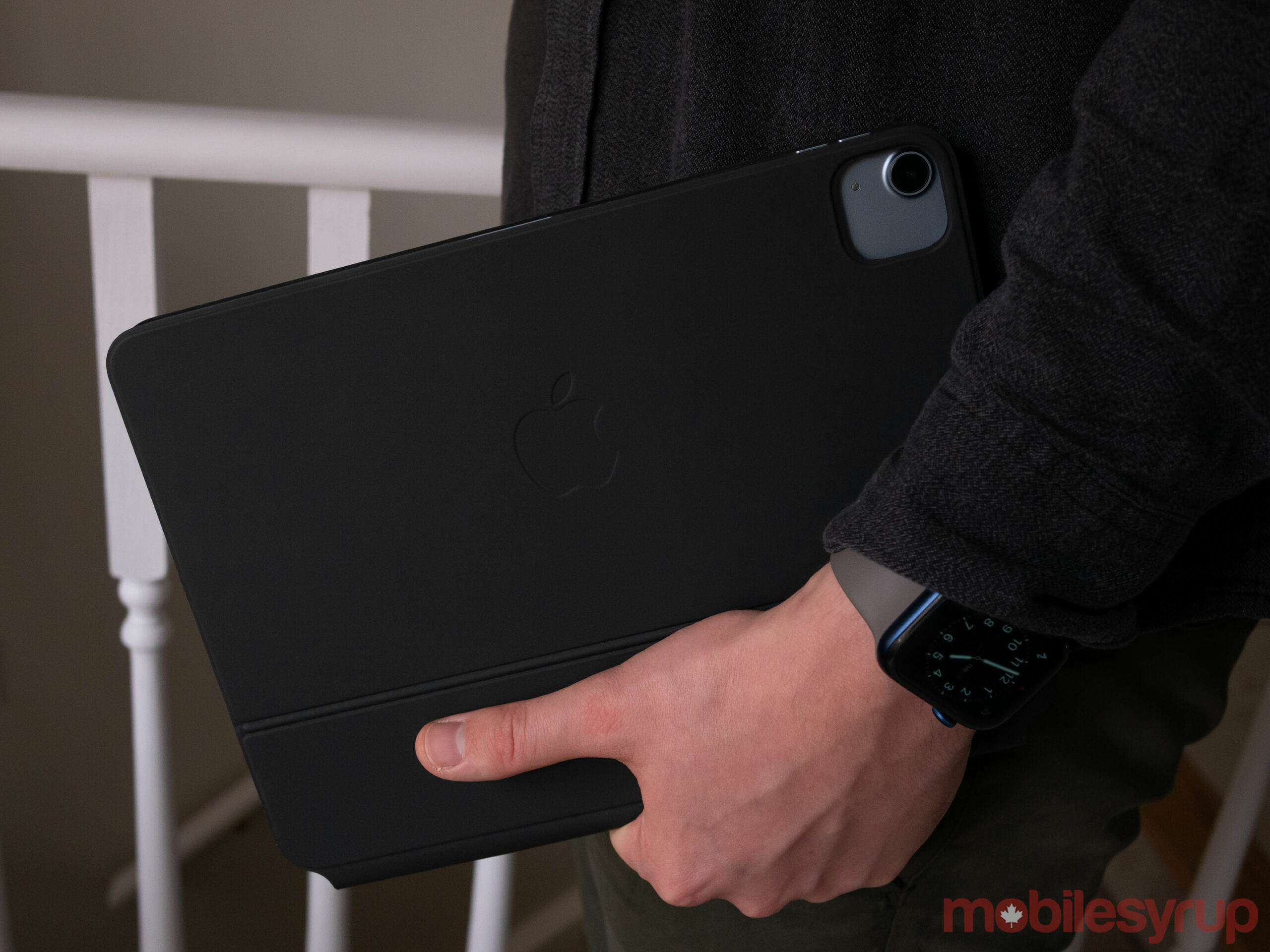 Everything from playing games to watching content on Netflix looks stellar on the iPad Air’s screen.

The tablet’s minimized bezels also offer a more immersive viewing experience — again, just like its more expensive counterpart. It’s also important to note that while the iPad Pro does feature Touch ID, this is the first time Apple has embedded its fingerprint authentication technology in the power button of one of its devices. 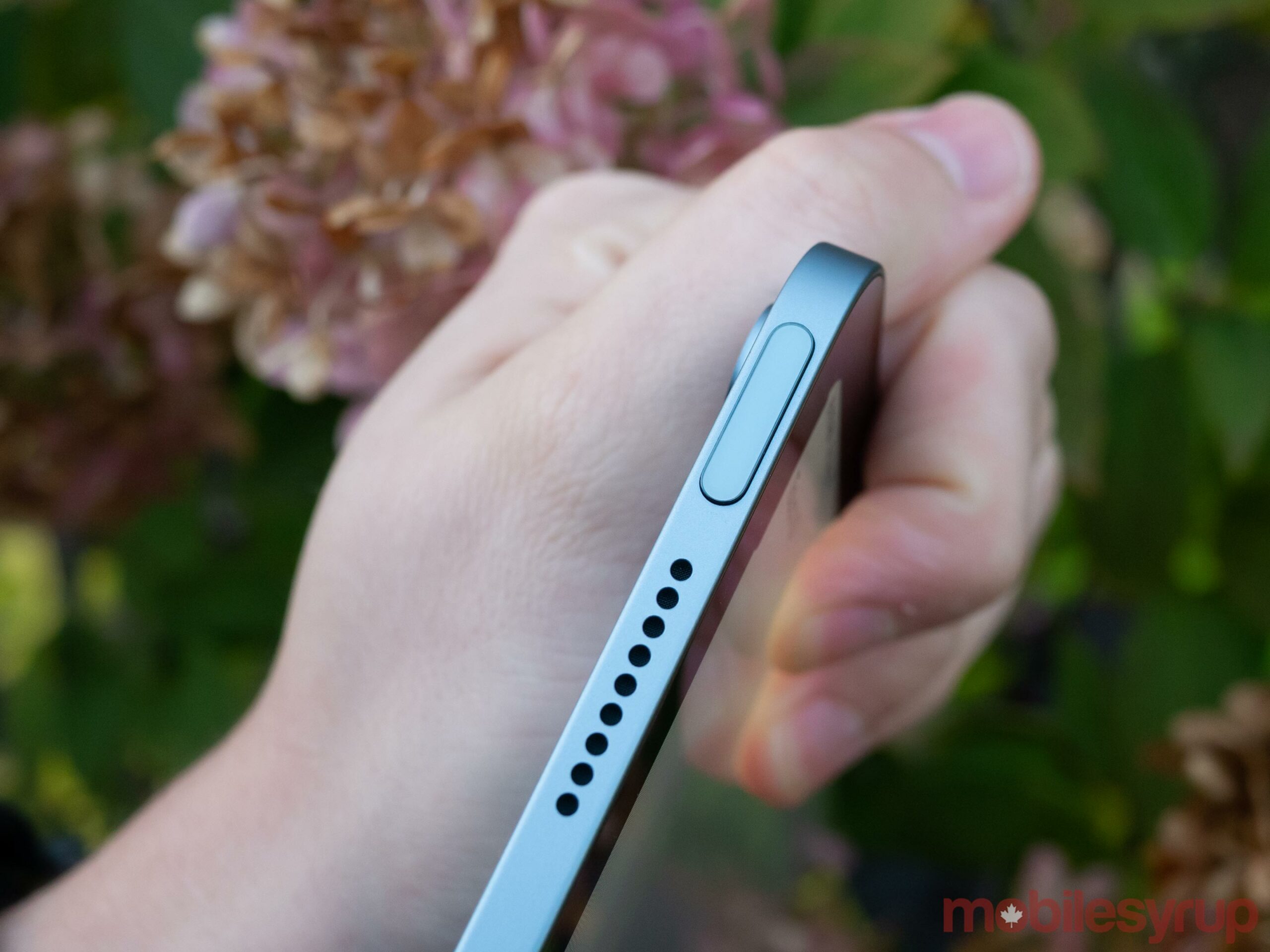 While I couldn’t get the scanner to log my fingerprint properly during the initial setup process for some reason, I was able to set it up after getting the new iPad Air up and running.

I find the scanner works roughly as reliably as the standard Touch ID button. If you have water or debris on your hands, it’s not going to authenticate properly. The button itself is also a little sticky, has a strange gloss to it and is sometimes difficult to reach given its positioning. 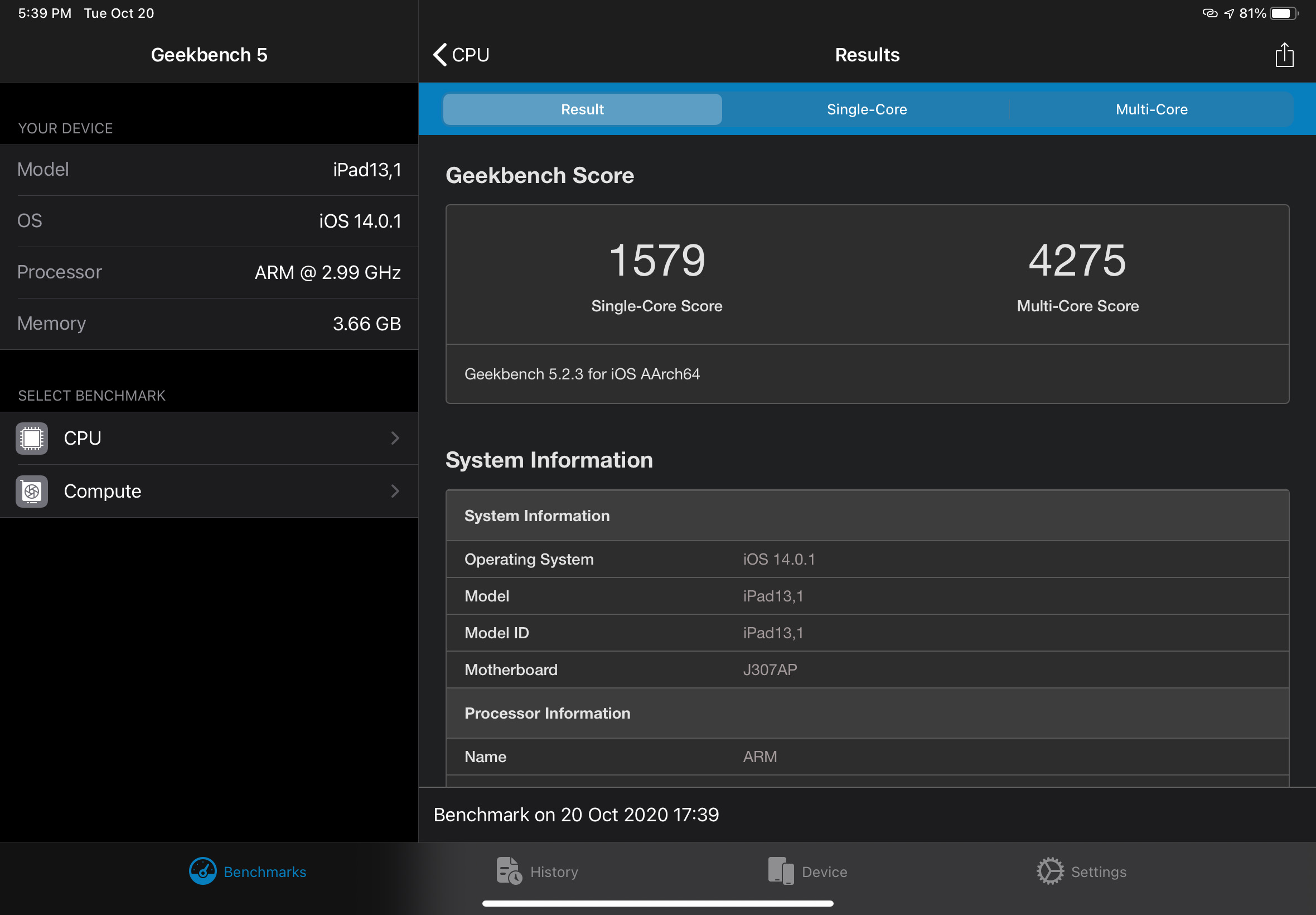 When I have the tablet in landscape mode, it doesn’t feel natural to claw my right hand over to the tablet’s left side. When in portrait mode, I experience similar results, though tapping my index finger on the sensor feels a little more natural in this orientation. Of course, you can register multiple fingers, so if you’re right-handed like me, it might make sense to add your left index finger as well. I like this concept for Touch ID, and I hope that Apple eventually brings it to other devices.

Though I don’t put much stock into benchmarks, with Geekbench, the iPad Air (2020) comes in at 1,579 for single-core and 4,275 for multi-core. This is higher than the 11-inch iPad Pro’s single-core 1,113 but under the high-end tablet’s 4,607 multi-core score. This is likely because the iPad Pro 2020 features 5.57GB of RAM compared to the iPad Air’s 3.66GB despite the latter tablet featuring a faster processor. 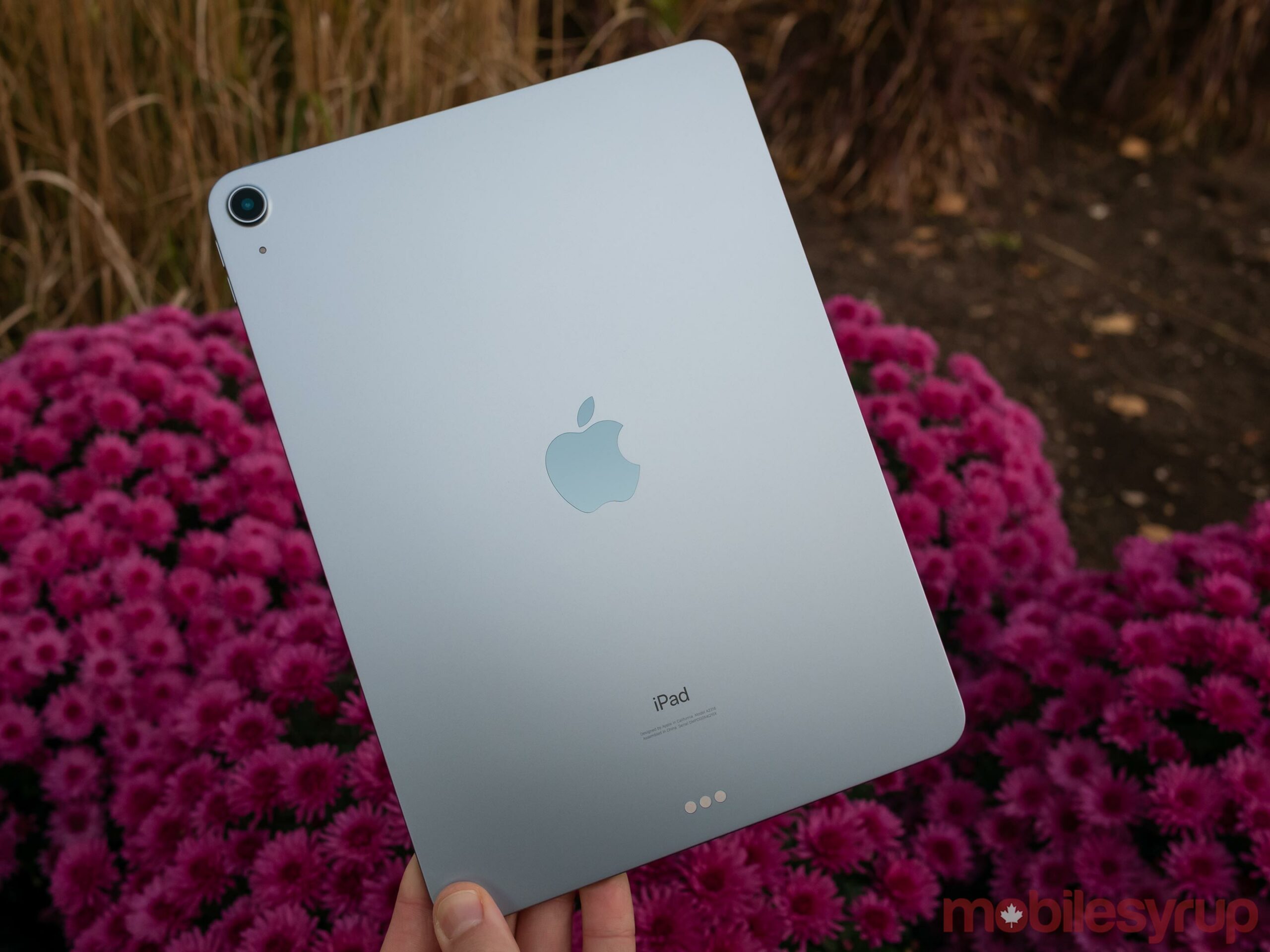 Other specs include the tablet’s camera capable of 4K video recording at up to 60fps and slo-mo video at 1080p at 120fps or 240fps.

Storage this year starts at 64GB and only goes up to 256GB. In comparison, the iPad Pro features two additional storage options, 512GB and 1TB. 64GB isn’t a lot of storage in 2020, especially if you aren’t paying for one of Apple’s iCloud plans, so most people are going to want to opt for the 256GB option.

“While the Pro’s speakers do sound more full, the different Air still emits great audio whether in landscape or portrait mode”

Finally, I found that battery life came in between 10 and 12 hours, depending on what I was doing with the tablet. As expected, watching content on Netflix, for example, drains the battery life a little faster than just browsing the internet.

The iPad Air also doesn’t feature quad speakers like the iPad Pro and instead includes a set of stereo speakers. While the Pro’s speakers do sound more full, the different Air still emits great audio whether in landscape or portrait mode. 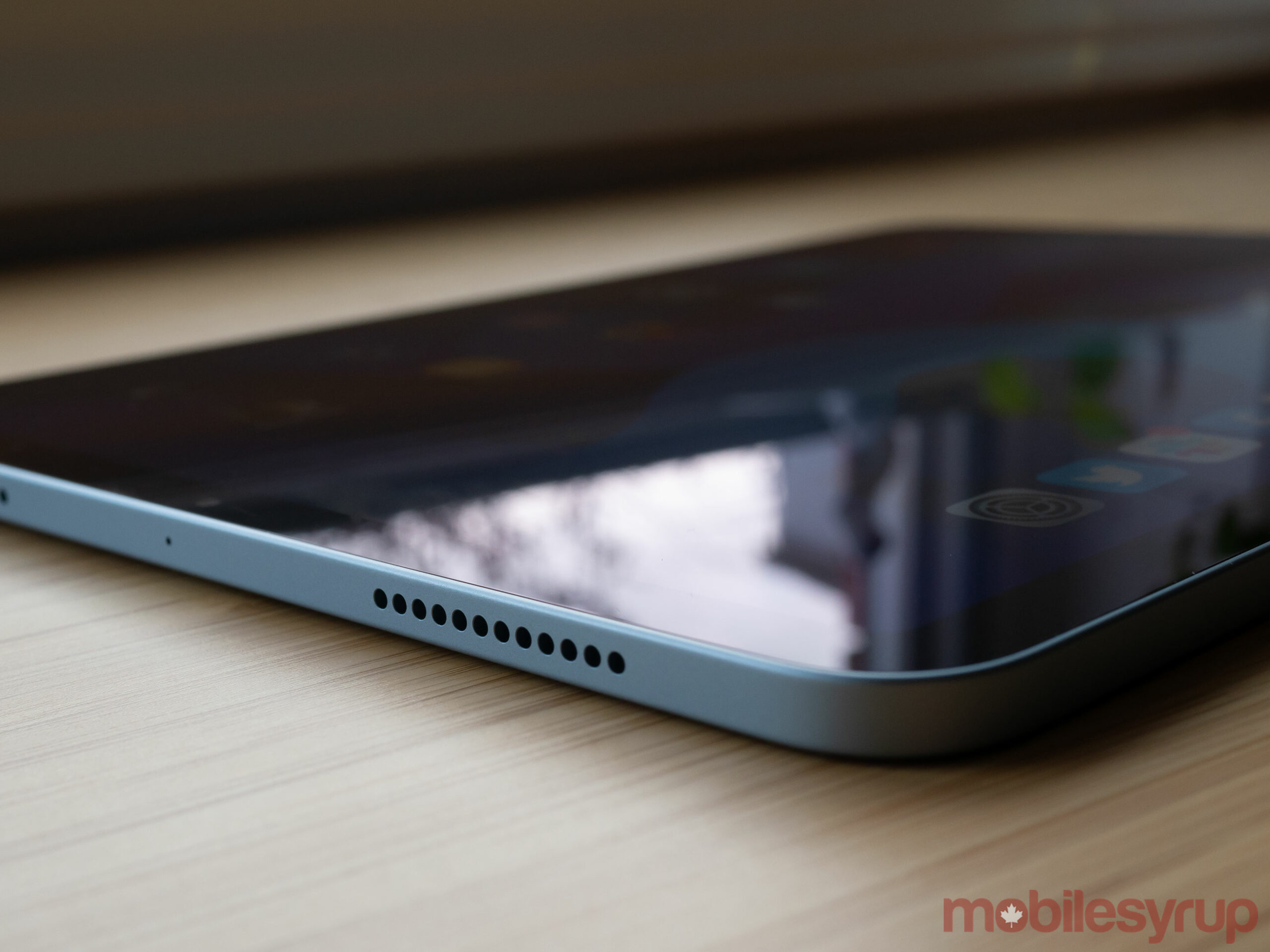 Unlike the previous iPad Air, this new, refreshed version of the tablet features 2nd-generation Apple Pencil support. This is a welcome move on Apple’s part, and I’d really like to see the company phase out the first-generation Apple Pencil at some point in the future. Like with the iPad Pro, the Apple Pencil magnetically attaches to the tablet’s top, making it always easy to charge and more accessible than the awkward first-gen stylus plugging into the previous iPad Air’s Lightning port.

The Apple Pencil itself is responsive and works great with new iOS 14 features like ‘Scribble.’ I edited all the photos you see in this review with the iPad Air (2020) with Lightroom and the 2nd-generation Apple Pencil. The experience was quick and snappy, but I did run into a few instances of lag when doing extensive spot removal. Beyond editing photos, I still don’t have much use for the Apple Pencil, but that comes down to how I personally use the tablet. 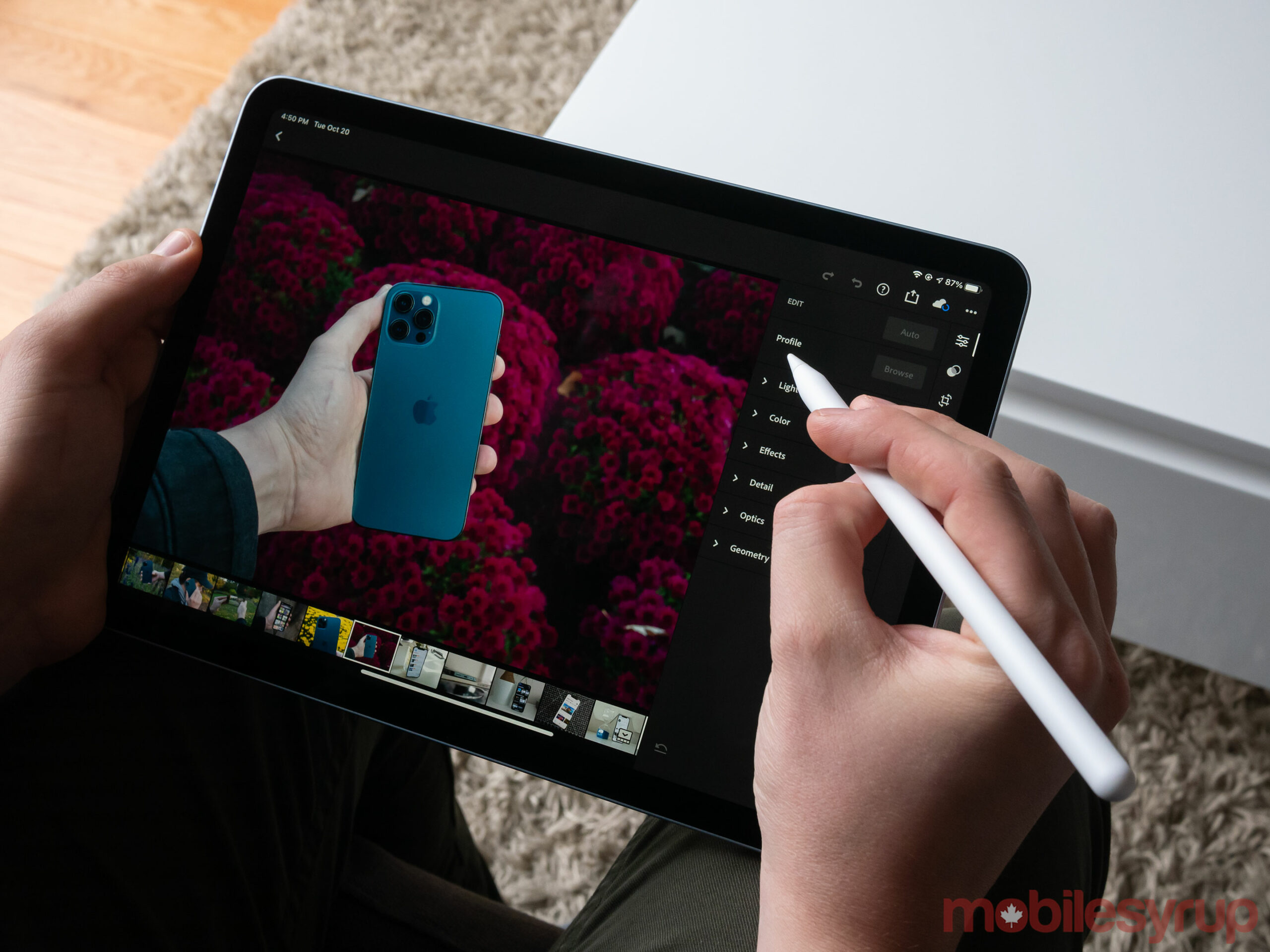 Surprisingly, the iPad Air (2020) works with Apple’s 11-inch Magic Keyboard originally designed for the iPad Pro (2020). The keyboard kind of weird, with only the single camera sticking out of the large square cutout, but it attaches solidly to the tablet.

While the Magic Keyboard is stellar, the iPad Air (2020) also likely works with third-party keyboards designed for the 11-inch iPad Pro. Most people will probably be better buying a third-party keyboard, especially if they plan to take advantage of iOS 14’s trackpad controls. 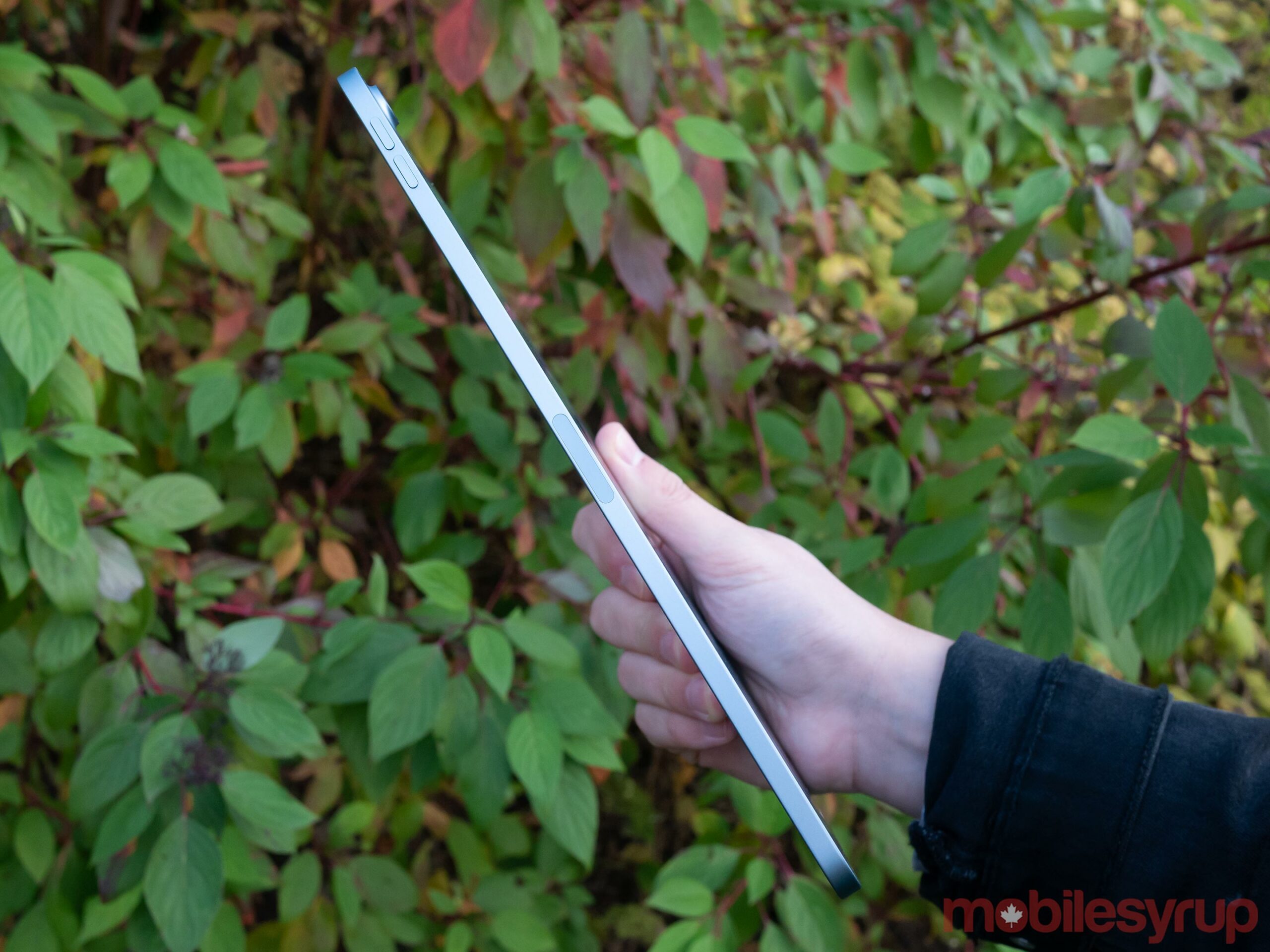 The one to buy

What's most confusing about the iPad Air is how it fits into Apple's tablet lineup. It's more powerful than the current iPad Pro despite not being a 'Pro' tier device, but lacks a LiDAR sensor for improved augmented reality AR apps and a 120Hz ProMotion display. Essentially, the new Air is Apple's no-frills, cheaper high-end tablet offering.

Given that I didn't find the iPad Pro's LiDAR sensor very useful, and while I like ProMotion, it isn't that drastic of a change to the display's performance, releasing the new Air is a really good move by Apple -- especially since it starts at $779 for the 64GB version compared to $1049 for the iPad Pro.

What you're getting with the new iPad Air is all of the great features Apple's highest-end iPad has to offer, including access to a robust App Store, a powerful processor, mouse/trackpad support and more, but for a lower cost.