With assistance from Quebec City's Beenox, Toys For Bob has made the best Crash game to date 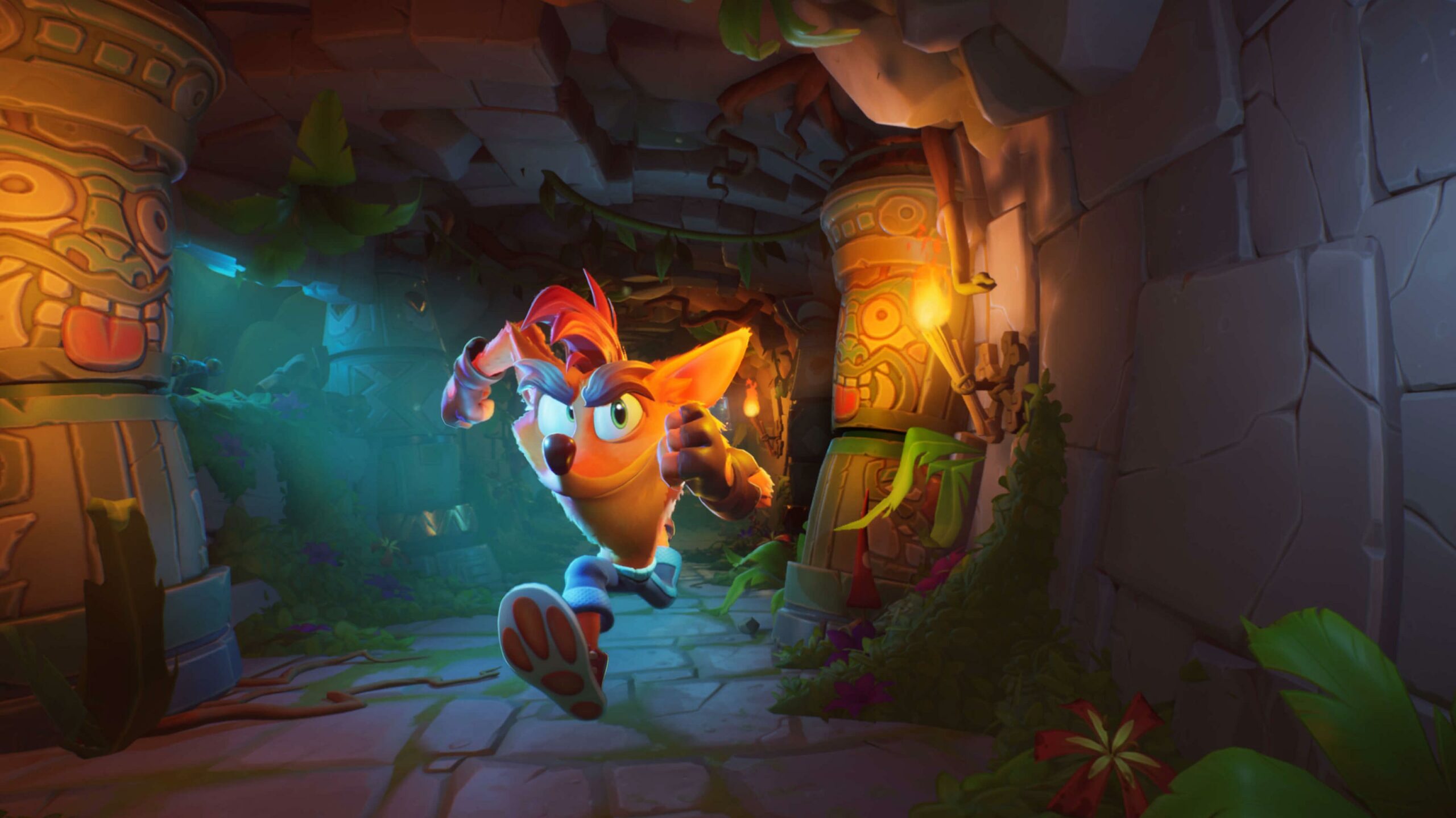 Crash Bandicoot 4: It’s About Time is something of a novelty among Activision’s large catalogue of games.

However, it’s been years since these properties had anything besides remasters, particularly Crash, which — outside of various mobile and kart racing games — hasn’t had a new mainline platforming entry since 2008’s mostly-forgotten Mind over Mutant. Even then, the other Crash games that populated the 2000s weren’t anything to write home about, either.

All of that is to say that Toys For Bob, the developer behind the Crash and Spyro remaster trilogies, had a lot going against it with Crash 4. It’s also why it’s even more impressive that the studio has made a Crash game that not only lives up to Naughty Dog’s original PlayStation trilogy, but actually surpasses it.

Right from the start, Toys For Bob has made the wise choice to ignore the continuity of the many Crash games over the past 20 years and set It’s About Time directly after the Naughty Dog trilogy.

This time around, Crash and his sister Coco must travel across the multiverse to collect the reality-altering Quantum Masks to stop Neo Cortex and N. Tropy once again. While the plot is rather thin, the game still provides a steady supply of charming interactions between Crash, Coco, Cortex and co., as well as numerous callbacks to Crash’s history and even a few Spyro easter eggs. Cortex is definitely the highlight of the story, though, with much of the humour coming from seeing just how defeated he feels after years of the same go-around with the ever-meddlesome marsupials. 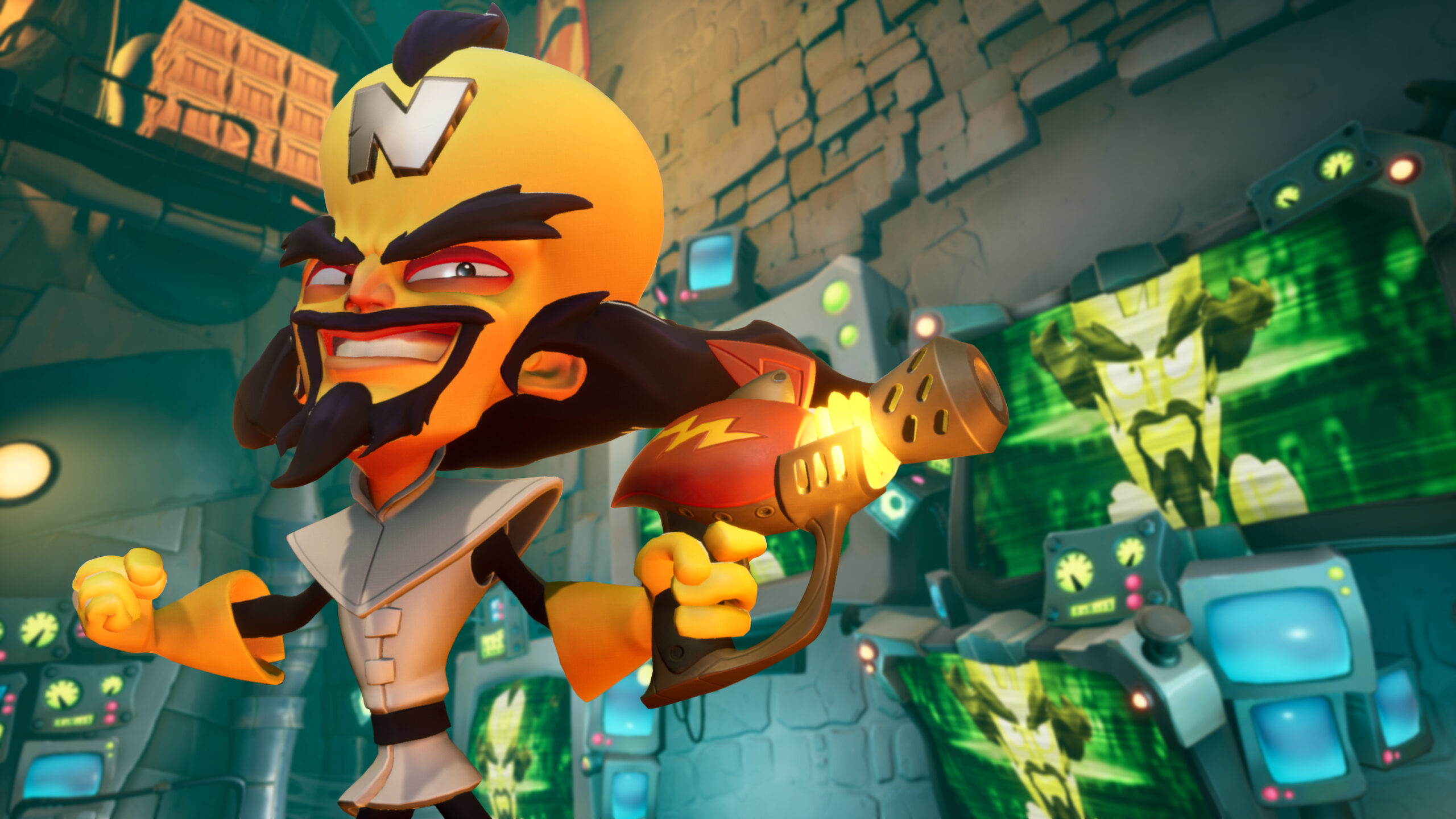 Above all else, though, Toys For Bob smartly takes full advantage of the multiverse concept to offer a variety of gorgeously detailed stages that take place across different time periods. At one minute, you might be running away from a T-Rex in prehistoric jungle, while in the next, you’ll be hopping through a lively Mardi Gras-inspired city and deadly chemical-filled factory. If you want to shake things up even more, you can even choose to play any level as either Crash or Coco, who play identically but have their own subtle differences in animation and voice acting.

In terms of gameplay, Crash 4 at its basic level offers the same double jump, slide, spin and Wumpa Fruit-collecting mechanics the franchise is known for. This time, though, they’ve been given a welcome added layer of polish. Admittedly, the original Crash games are notorious for being overly difficult. In particular, their somewhat wonky, loose controls could make it difficult to gauge where, exactly, Crash would end up after a jump.

Crash 4, however, tightens up Crash’s handling to make it less floaty and more precise, so you always feel like you have a perfect hang on his movement. A new optional ‘shadow precision’ setting also places a little yellow circle below an airborne Crash so you can see exactly where he’s going to land.

That’s not to say Crash 4 is easy, though. All told, the game is consistently challenging, especially when you factor in the aforementioned Quantum Masks, which are found in specific areas of levels and change how you view and interact the environment in radical ways. To be sure, the masks’ abilities — such as the time-altering Kupuna-Wa and gravity-shifting Ika-Ika — aren’t exactly original. Nonetheless, they’re used to outstanding effect, with the setpieces involving them becoming appropriately more elaborate over the course of the campaign.

For example, some of the first challenges with Kupuna-Wa simply have you slowing time to keep some falling stalactites out of the way while you quickly jump on others to progress. Later stages, though, require more strategy, such as in instances where you’ll have to rapidly turn Kupuna-Wa on and off in between jumping to use Nitro Crates as platforms before they explode. Masks are made even better when used in conjunction with new mechanics like wall-running and grind rails — activating and deactivating Lani-Loli to phase environmental hazards out of my way right in the nick of time never stopped being thrilling. This all culminates in some brilliantly-designed late-game stages where you’ll be swapping masks mid-jump and have to quickly react to incoming obstacles accordingly. 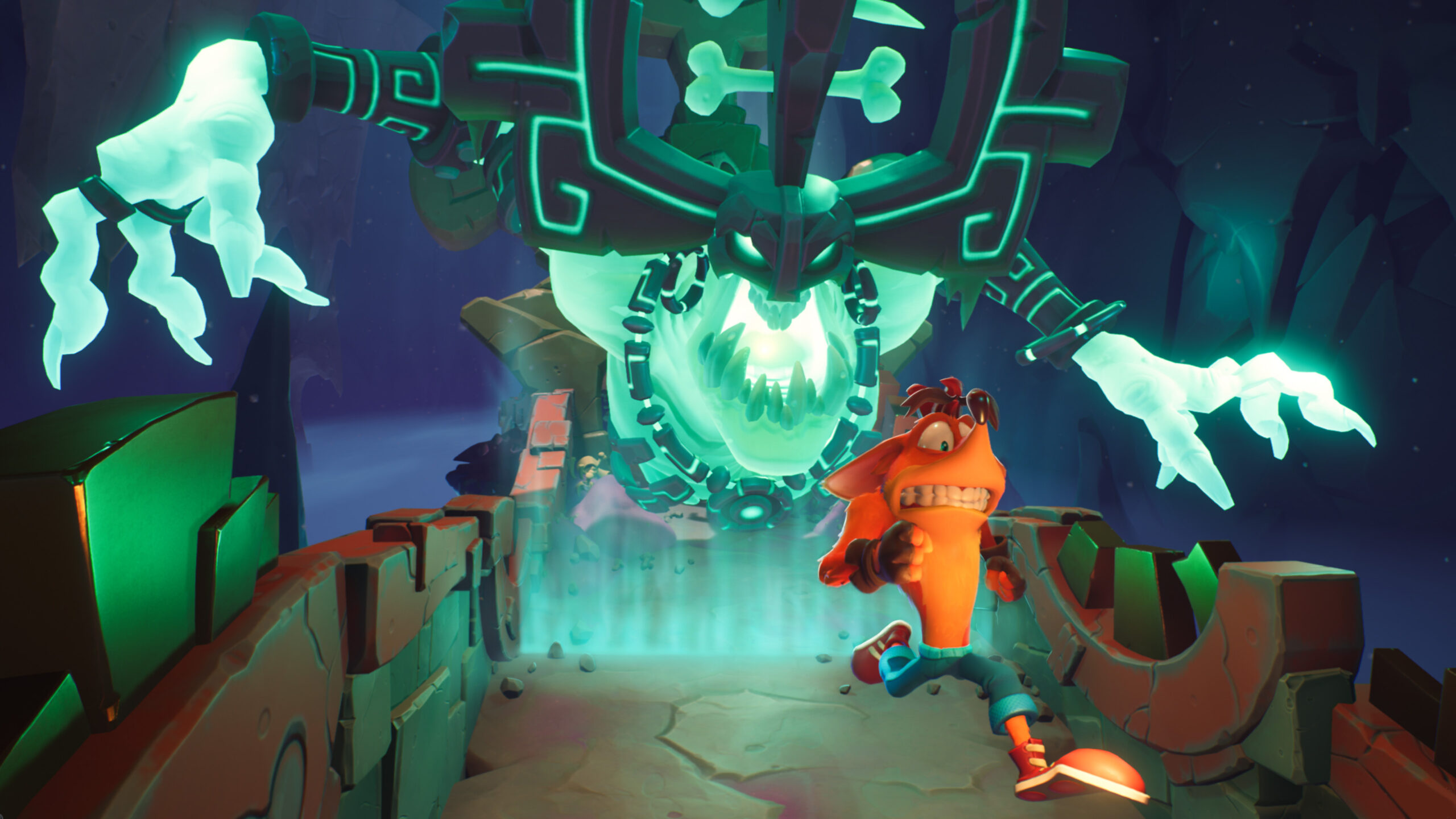 For one thing, the game’s regular shifts in perspective (like in the classic ‘run towards the camera’ sections and during corner-turning rail grinding) prove to be a double-edged sword. While they do help keep gameplay varied and provide an impressive feeling of scope, they also sometimes make it difficult to gauge where Crash is in relation to an obstacle. In turn, you’ll likely mistime a jump, especially during on-rails segments where you swiftly turn corners and aren’t given enough time to react.

Likewise, Crash 4 has a rather frustrating tendency to place out-of-sight projectile-firing enemies in its 2D sections. This lead to several situations when I’d already plotted my jumps to avoid lasers and Nitro Crates, only to fall right into an attack from a barely visible enemy. Overall, though, Crash 4 typically feels challenging but fair, with most of my deaths resulting from my own errors.

More content than you can fit into a crate

What’s most impressive about Crash 4‘s campaign is that it’s only a small part of the overall package. For context, I cleared the story in about 10 hours, and my game said I’d only reached 37 percent completion. That’s because there is a slew of other great content on display here — most notably, the Flashback Tapes and N. Verted Mode, both developed in conjunction with Quebec City-based Beenox (Crash Team Racing Nitro-Fueled). 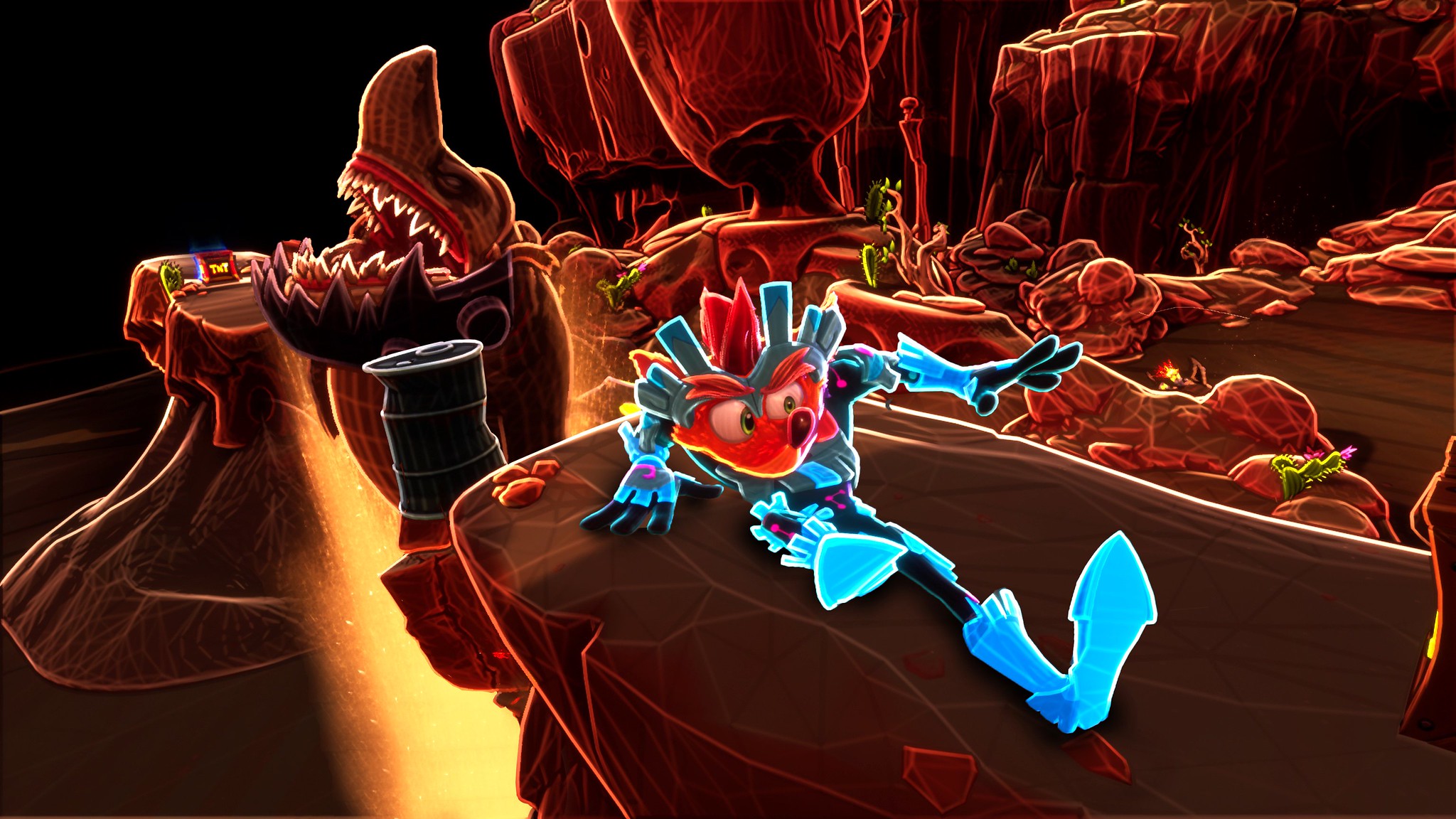 N. Verted Mode is a clever spin on ‘mirror modes’ that is unlocked for each level once you clear it once. With N. Verted Mode, each level is given appealing new hooks, including a beautiful, unique visual style (like a black-and-white filter that also speeds up gameplay) and reworked obstacles.

The Flashback Tapes, meanwhile, are special levels that can only be unlocked in levels if you manage to collect them without having died before reaching them. That said, they’re absolutely worth the hassle, as they offer tantalizing looks at Cortex’s early tests on Crash alongside entertaining banter between the mad scientist and his assistant, N. Brio. In practice, each Tape unlocks a unique 2D platforming crate-based challenges, which are a Crash in its purest form and serve as a nice contrast to the campaign’s mask-fuelled mayhem.

Finally, there are bonus levels that allow you to play as Cortex, an alternate universe version of Crash’s girlfriend Tawna and former Cortex minion Dingodile — all of whom feel wonderfully distinct. Cortex, the best of the bunch, lacks a double jump but has a dash to give some horizontal range, and the ability to zap enemies to turn them into static platforms or bouncy pads to get higher. Dingo, for his part, can glide short distances using his gun and suction up distant objects like TNT to shoot at enemies or obstacles. Finally, Tawna has a grappling hook that can reach distant enemies and crates.

These characters’ unique abilities ensure that their levels are always refreshingly different from Crash and Coco’s. There’s one moderate nuisance, however: there’s no way to aim Cortex and Dingo’s guns manually. As a result, you sometimes have to rely on the game auto-locking on the desired target, which can be frustrating as it fails to do so amid all of the crates and enemies that lie in front of you.

Given the series’ track record over the past two decades, Crash 4 could have easily been yet another underwhelming Crash game. Thankfully, Toys For Bob was more than up to the task, delivering a top-notch Crash experience containing a nostalgia-driven story, expertly designed levels, several equally compelling playable characters and outstanding replay value. Simply put, this is the best Crash has ever been, and it’s a game that all developers looking to revive classic franchises should absolutely take notes from.

Crash Bandicoot 4: It’s About Time is now available on PlayStation 4 and Xbox One. A free demo containing three levels from the game is also available on both platforms.

Note: Crash 4 has a ‘Pass N. Play’ mode, which brings local multiplayer to the mainline Crash games for the first time. As the name suggests, up to four players can take turns passing the controller to see who can get the highest score across a few different modes. Because of physical distancing amid the COVID-19 pandemic, I did not have someone to try these modes with, but their inclusion is still noteworthy.