Google's desktop OS is far from perfect, but it finally does enough for almost everyone

Google created Chrome OS in 2009 and has been adding new features to the still relatively new operating system ever since. The rapid-fire updates seldom stop, allowing you to almost watch Google build out the desktop-class OS in real-time.

While a nice idea, in theory, this also means that Chrome OS had a rocky start. Fast-forward to now and the operating system is facing difficulty shaking the “barely better than a tablet,” stereotype.

As 2019 closed, I started to spend more time with Chrome OS while reviewing laptops like the Asus Chromebook Flip C434TA and the Acer Chromebook Spin 311. I’ve also been spending an extended period with Google’s Pixelbook Go and the excellent Acer Spin 13.

It’s safe to say that while I’m no Chrome OS mastermind, I’ve incorporated the operating system into my life and I’ve learned how to work with its quirks instead of against them. Hopefully, I can use what I’ve learned to help you decide if a Chromebook is right for you.

How I use Chrome OS 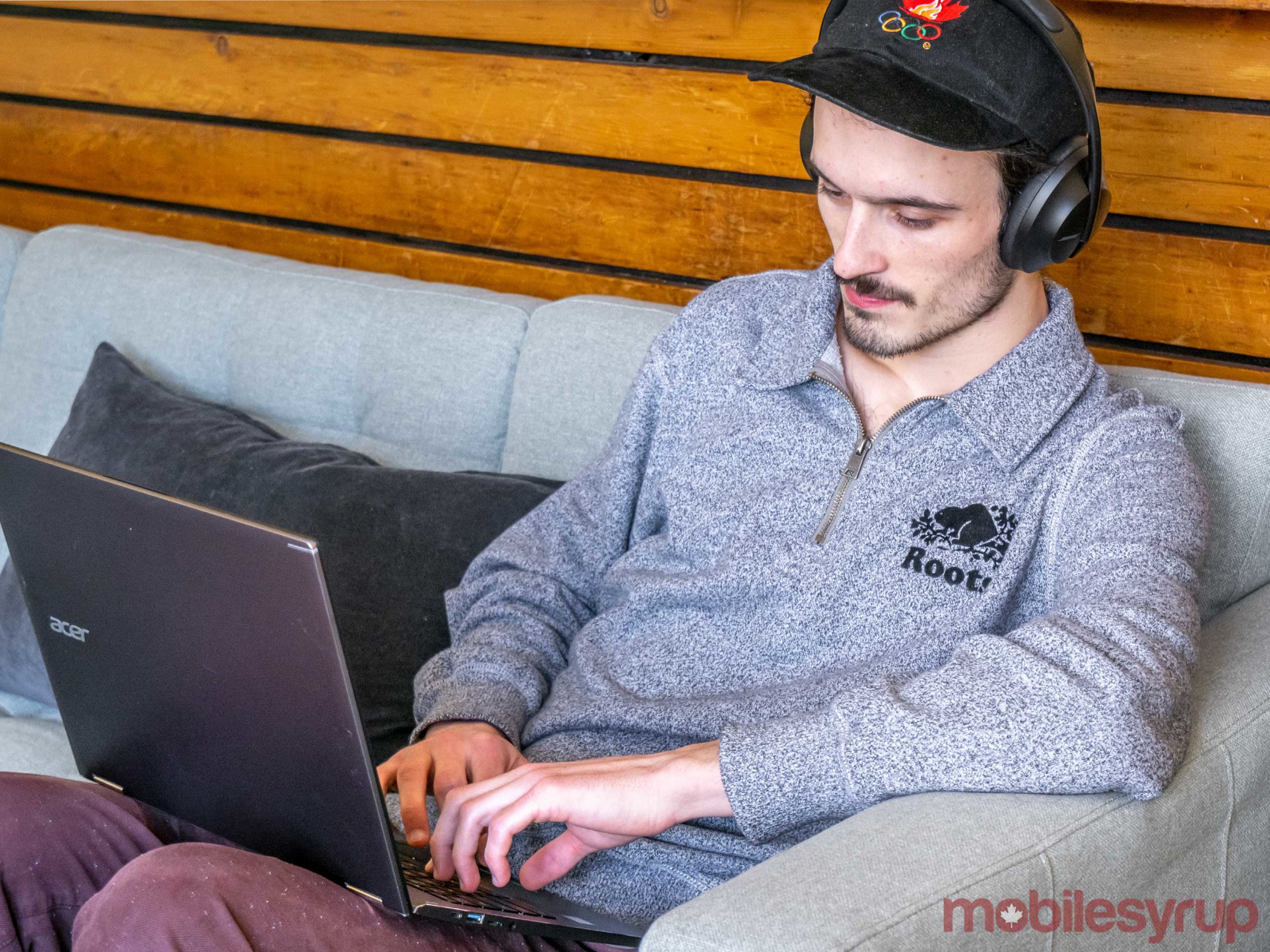 Before anything, I needed to learn about progressive web apps (PWAs) since Android apps on Chromebooks aren’t exactly great. While they can often help you find a niche tool or service, most big-name apps that also run as a PWA are generally better.

Once I set up a handful of PWA shortcuts to platforms like Spotify, Google Docs, Gmail, Slack and MobileSyrup, I was ready to go. Some of these I set to open in a Chrome tab like a regular web page, while others I specify to open in a dedicated window, masquerading as a traditional app. 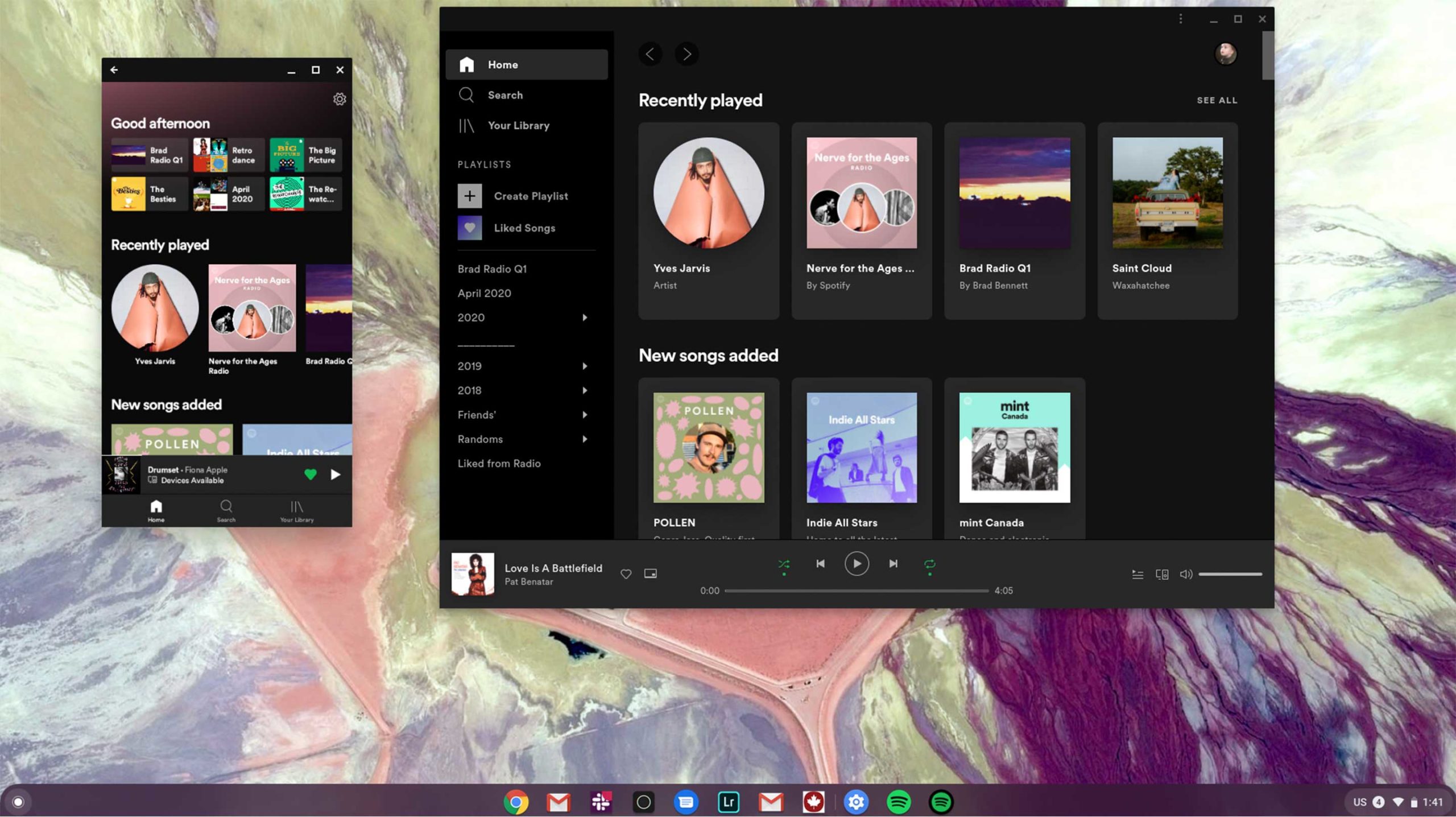 From there, you need to download Chrome or Android apps to fill the gaps in your workflow. For me, that means an advanced wallpaper tool to rotate my desktop background and a photo editing app.

I’ve tried out a few editing apps, but I’ve found Polarr to be the most consistent and easiest to use. Hopefully, someday Adobe will fix the web version of Lightroom so it’s more usable, but for now, Polarr is better. This app isn’t perfect, but I’ve found it perfectly capable of editing small batches of RAW pictures.

Next, I link my phone to the Chromebook, allowing text messages to appear on the laptop. You can also set your computer to stay unlocked when it’s near your phone and instantly tether to the device’s hotspot if you lose Wi-Fi. 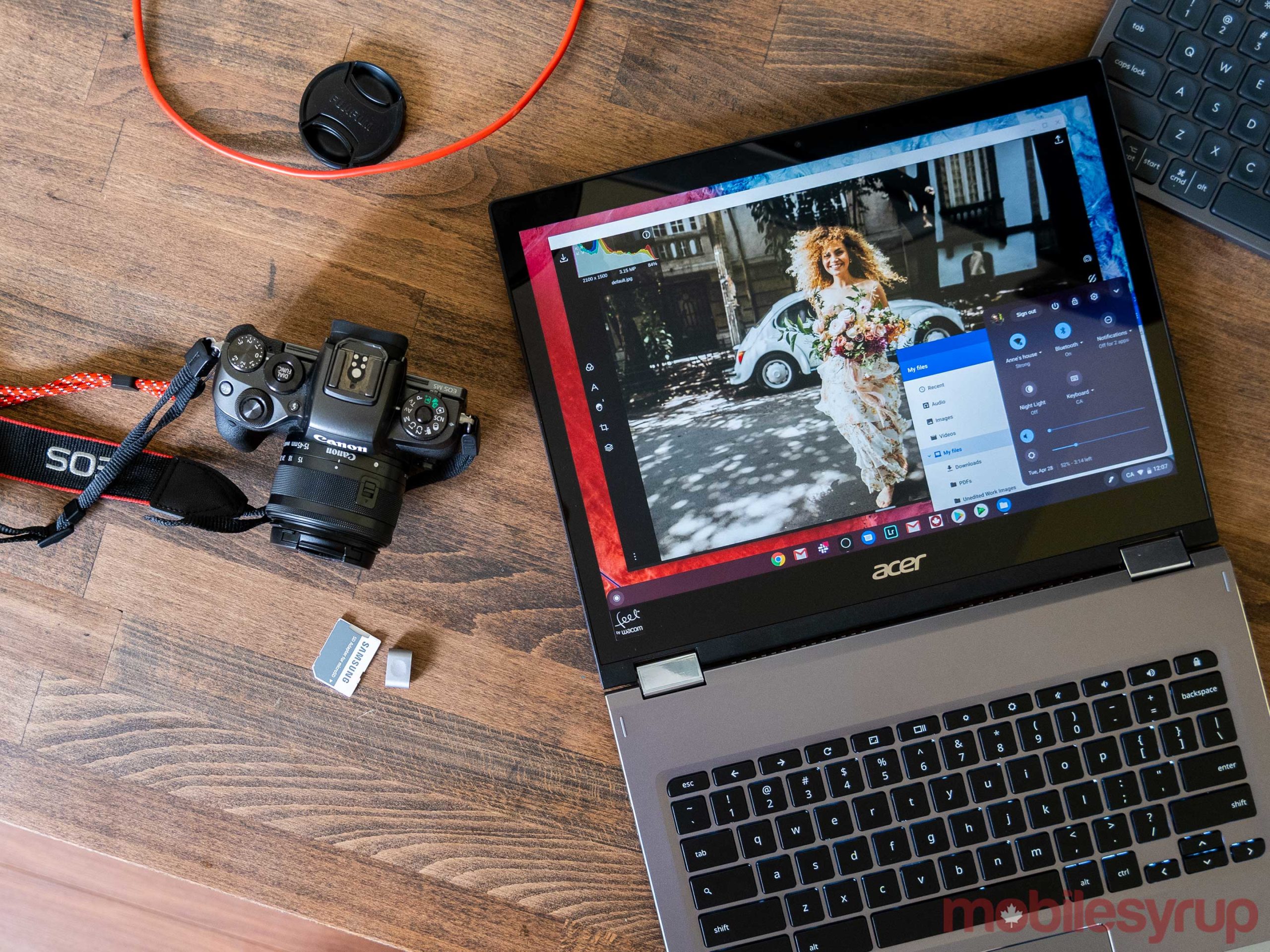 You’ll need to get used to the awful ‘Files’ app that looks like it was pulled straight from Android Eclair. Luckily, Google seems to be on track to update its visual design. Still, it’s unclear if users will be blessed with any added functionality.

Because it’s a Chromebook, Google expects you to save a majority of your work in the cloud. That means the file system works a little differently than Mac and Windows. I’ll get more into that below when I detail what Chrome OS needs to step up in usability.

Overall, that’s how I set up my Chromebook and it takes about ten minutes or less.

What it needs to really compete 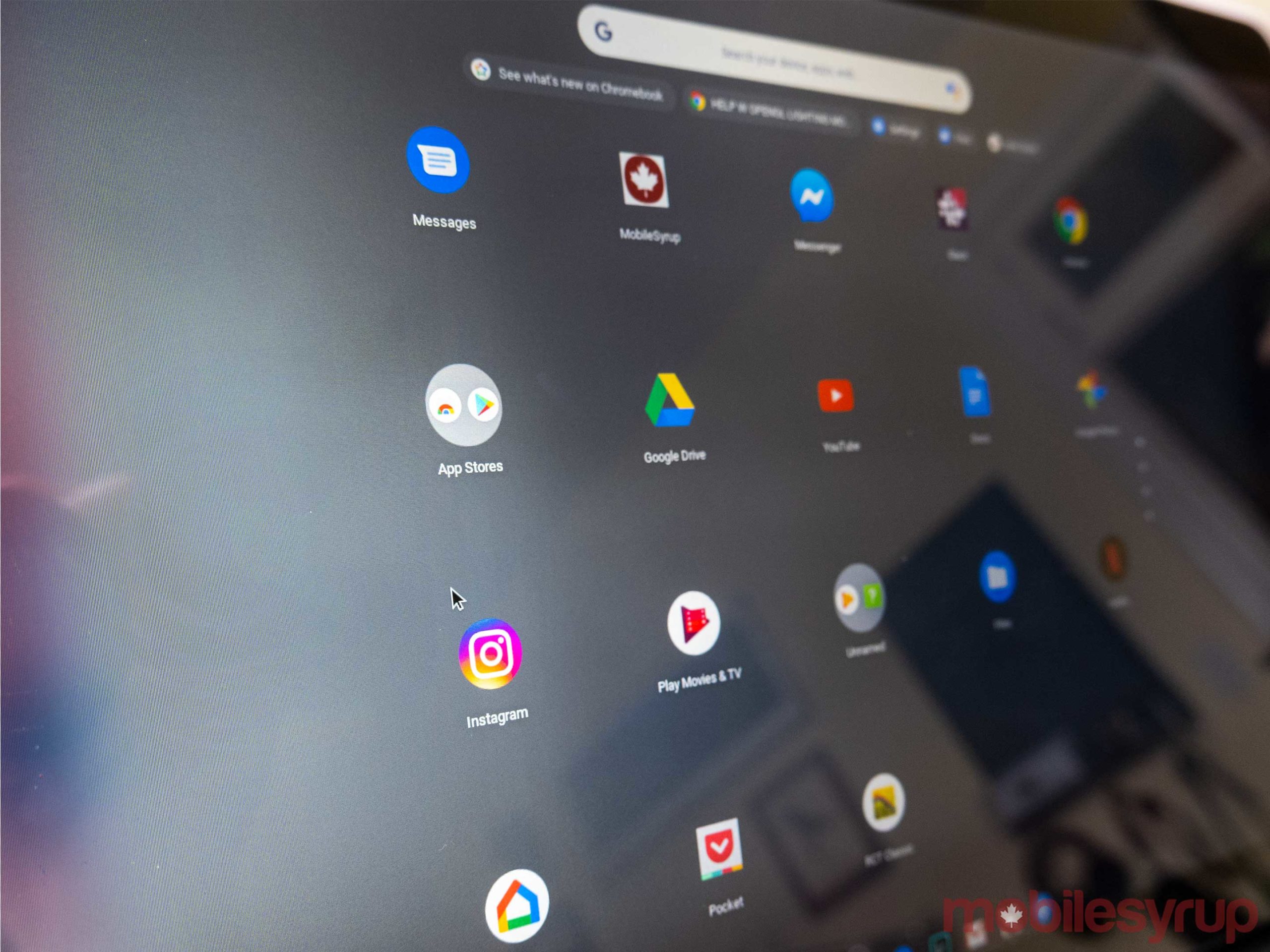 While Chrome OS is usable, I think fixes in a few areas will improve the usability of the platform.

My biggest gripe right now is the Files app. It’s old and gets the job done, but compared to what you can do in the files apps on Windows and macOS, it’s hard to forgive Google’s lacklustre effort here.

For instance, any new file you add to a Chrome computer from the web goes into the ‘Downloads’ folder. That means you might want to make a few sub-folders here to help keep it organized.

I have a folder for my edited work pictures, another for the unedited versions and a folder for my wallpapers. You might be like that’s a weirdly small amount of folders, but you’re forgetting that all of my written work is stored in Google Drive. 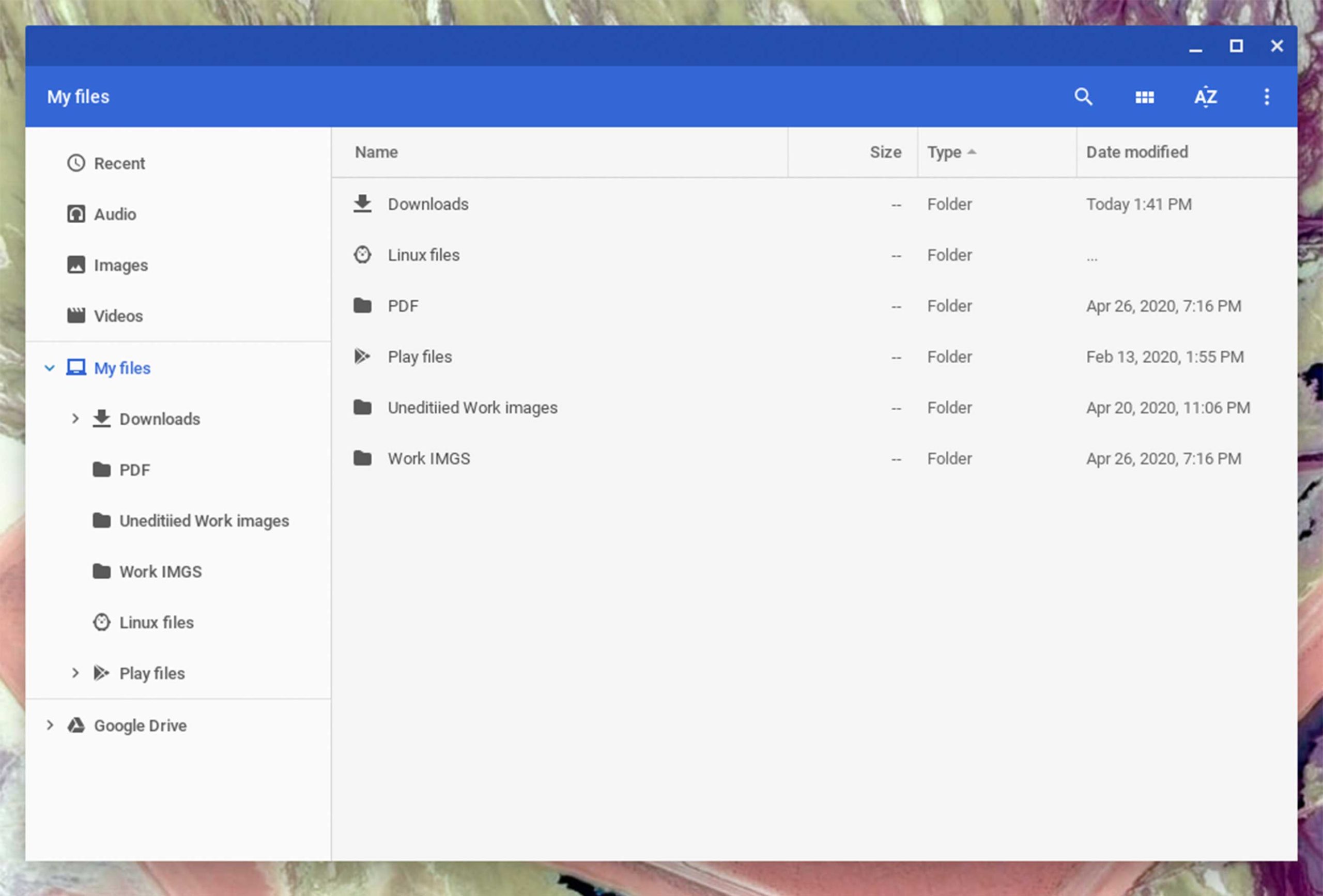 There are dedicated ‘Audio,’ ‘Images’ and ‘Videos’ sections along the top of the app, but they’re useless if you mainly deal with photos like me since it just throws all your pictures together. It would be nice to have PDF and document sections here, along with more sorting options.

There are a few other tweaks, like adding your own folders to the sidebar, but overall, Google needs to put in some work to this section of the operating system

Next up, Chrome OS needs an Adobe partnership. This would open up laptops powered by the OS to more pro-level creative functions. Even having Lightroom, Photoshop and Premiere Pro would go a long way to making Chrome OS a more attractive operating system.

Even Google releasing its own creative suite that in theory would bring some of the significant features over from Adobe products to Chrome OS, would help fill the creative void. If you do the odd RAW photo edit, you can get away with it on Chrome OS, but the experience is nowhere near as good as it is with Adobe’s apps. 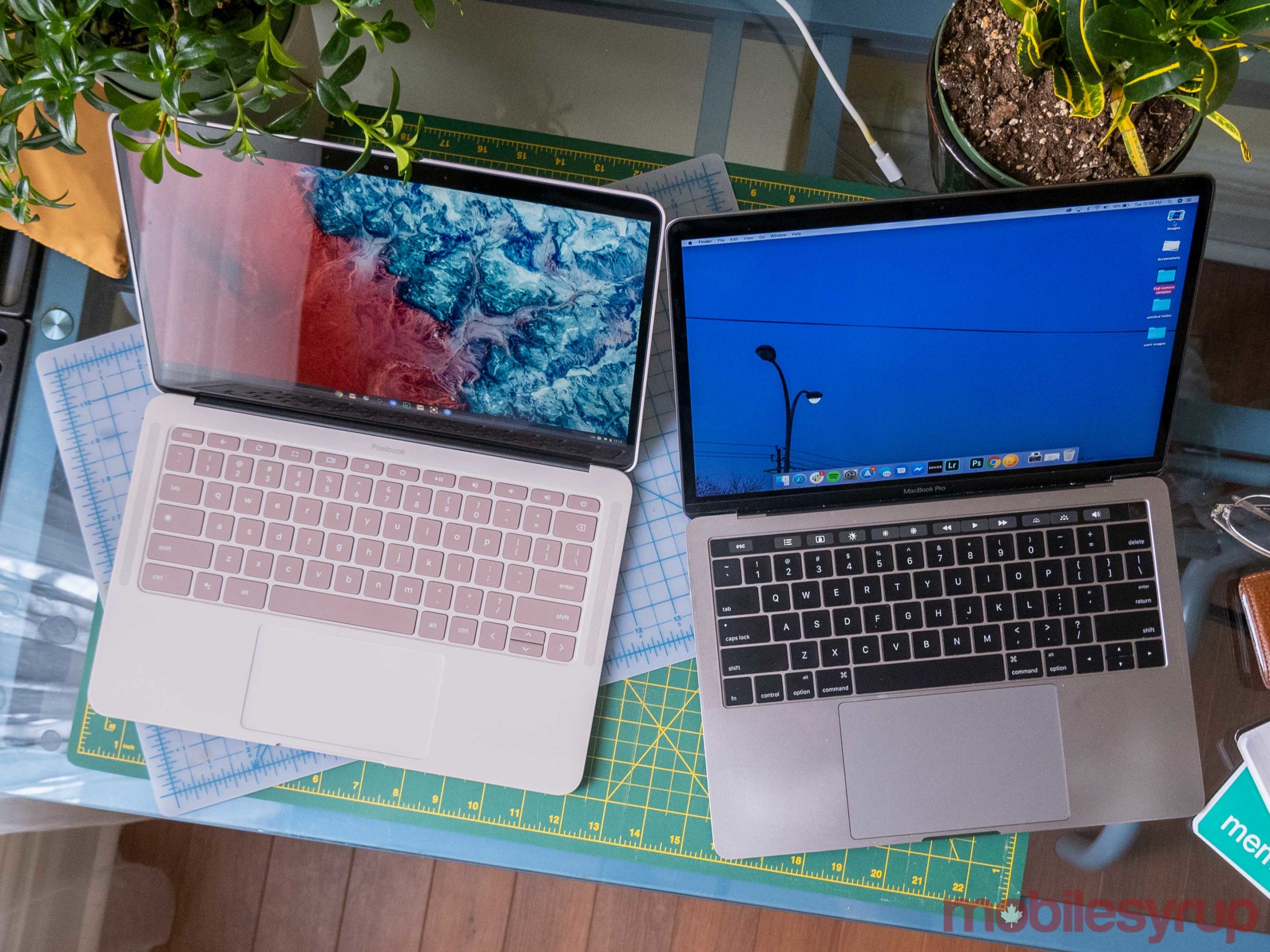 Yes, I know you can run Linux apps on the device, but if Chrome OS wants to step up, it needs better native implementation.

I’d also like to see Google implement improved Android app integration. Currently, it’s quite limited and it would be awesome for Google to add something similar to Apple’s ‘Handoff’ and ‘Cloud Copy & Paste’ features.

Beyond these core issues, Chrome OS is surprisingly good. It could use a little bit of polish, but as long as you don’t rely on specific apps for your work, you’re more than likely good to go with a Chromebook. 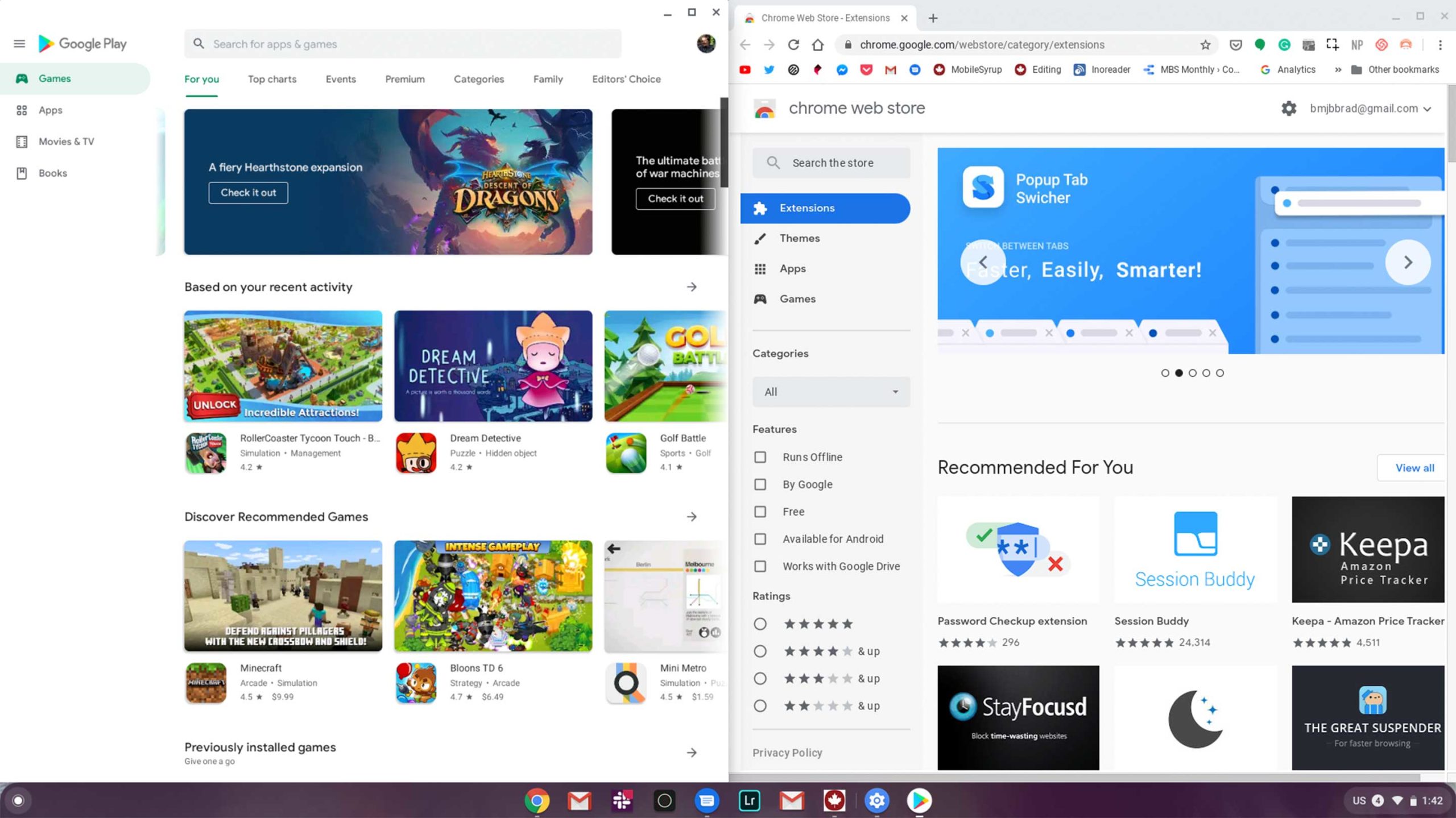 The final thing Chrome OS needs is a cohesive app store where you can find PWAs, Android Apps and Chrome extensions all in one location.

Google does seem to be working on this feature as some users are reporting the Play Store installing PWAs instead of Android apps, but I think the tech giant needs to be more transparent with this and make it more intuitive for people to add programs to their device

But wait, I thought you said it was usable today? 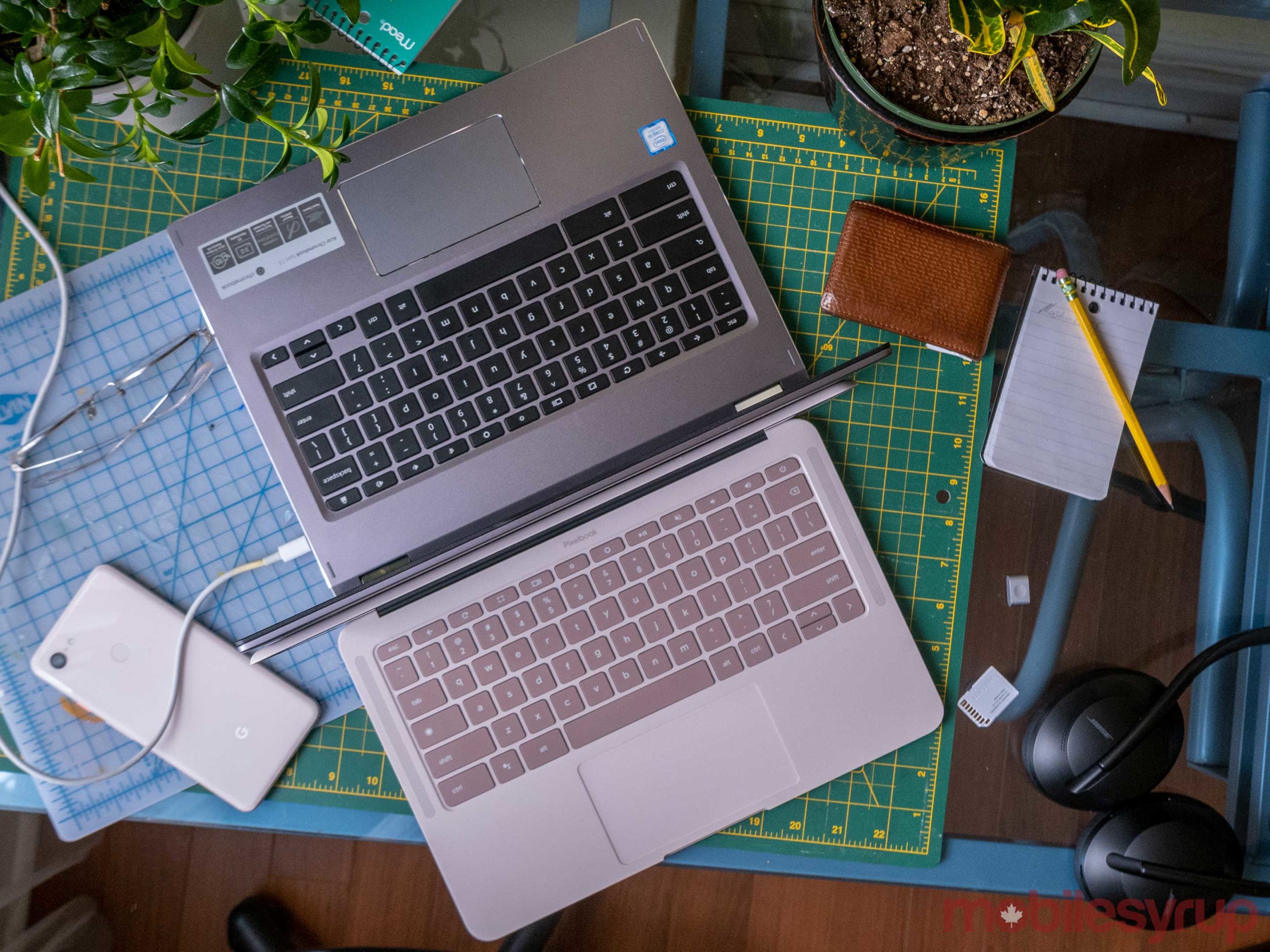 In 2020 almost anyone can sit down at a Chromebook and be up and running in a few minutes as long as they have a Google Account.

Right from the get-go, you can use Google Docs for word processing, Sheets for working with spreadsheets, Slides for making presentations, Gmail and more. Anything accessible from the Chrome browser is fair game and that means you can do way more than you might assume.

For anyone like me who only edits maybe five RAW images a day and then spends most of my time online in WordPress and parsing through way too many open tabs, Chrome OS is more than fine. Depending on your model, it can be very responsive, and it’s often packed into small and lightweight computers with excellent keyboards.

Many even have convertible designs making them pseudo-tablets. Oh, and did I mention that Chrome OS also has a reasonably decent tablet mode. That means when you’re in this interface, or if you have a tablet-first Chrome OS device like the Pixel Slate, it’s still quite natural to use.

For anyone that writes for a living, a decent Chromebook can be the ultimate tool. Its simplicity is key because while it does lose some features, it’s also devoid of distractions. Speaking of working without distractions, Chrome OS features an excellent full-screen mode that also works through Chrome on Windows, but not Mac. It hides that search bar and everything on the screen except for the page you’re working on. I’m a big fan of this because it makes every website feel like an app.

Another feature that people might either love or hate is a physical ‘Search’ button on the keyboard. This button pulls up the app drawer about a quarter of the way and presents a Google Search bar and five recently opened apps. 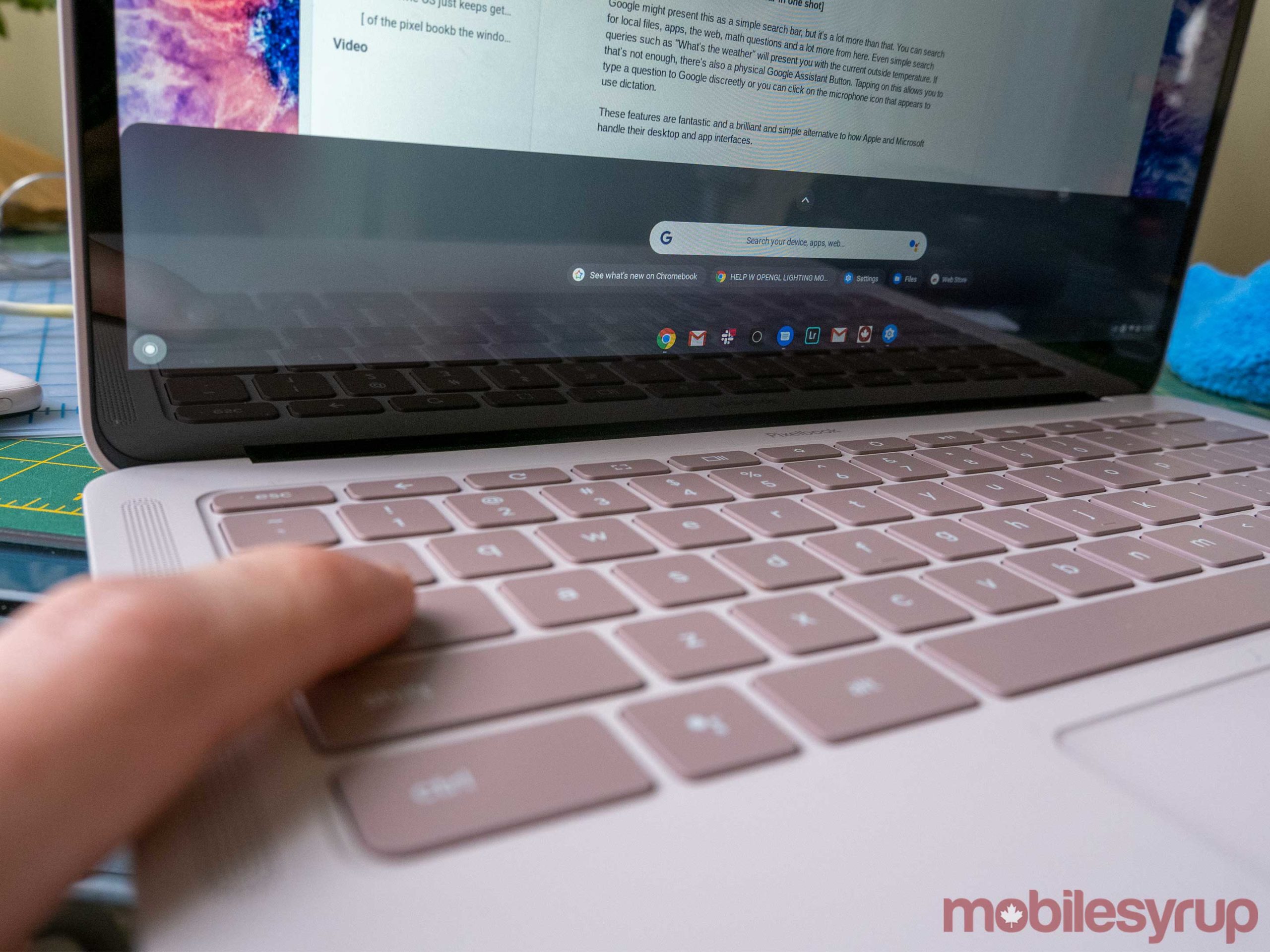 Google might present this as a simple search bar, but it’s a lot more than that. You can search for local files, apps, the web, math questions and a lot more from here. Even simple search queries such as “What’s the weather” will present you with the current outside temperature. If that’s not enough, there’s also a physical Google Assistant Button. Tapping on this allows you to type a question to Google discreetly or you can click on the microphone icon that appears to use dictation.

These features are fantastic and a brilliant and simple alternative to how Apple and Microsoft handle their desktop and app interfaces. 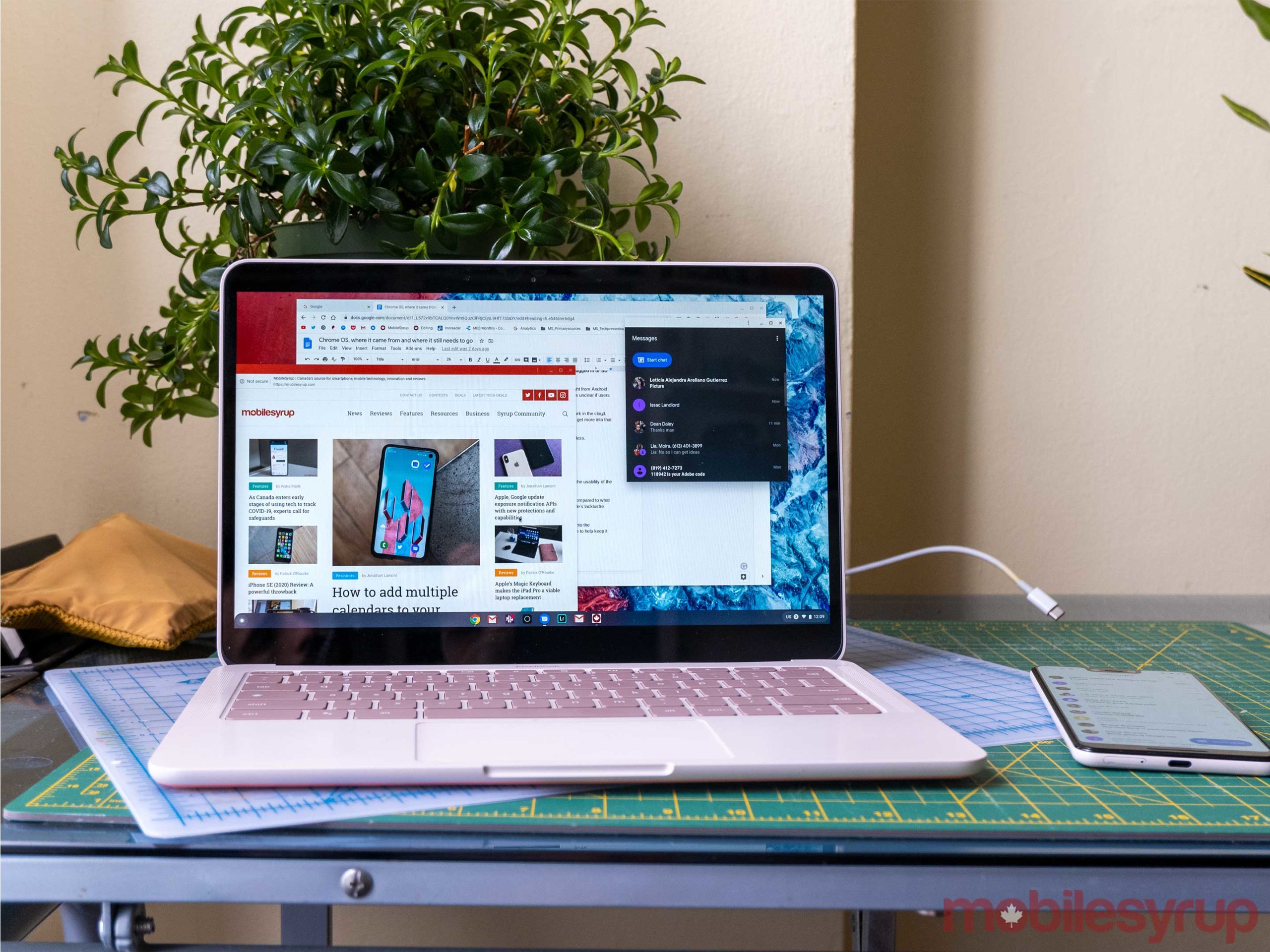 If you want to see if a Chromebook is right for you, try only using Google Chrome to accomplish your daily computing needs for a few days. It will be hard to adapt your workflow perfectly in a few days, but hopefully, this kind of test can help people see how capable Chromebooks are for everyday tasks.

While I have pointed out a lot of flaws within Chrome OS throughout this article, I originally wanted to let people know that Chrome OS is likely perfect for them because it’s simple setup and reliance on Chrome actually make it really easy to use.

Something is exhilarating about running the lightweight operating system on a machine that might struggle under Windows or macOS, all while still working productively. And, while I may have mentioned a lot of issues with the OS here, the good part is that Google is always updating it so a lot of these problems will likely start to fade away after a little more time.