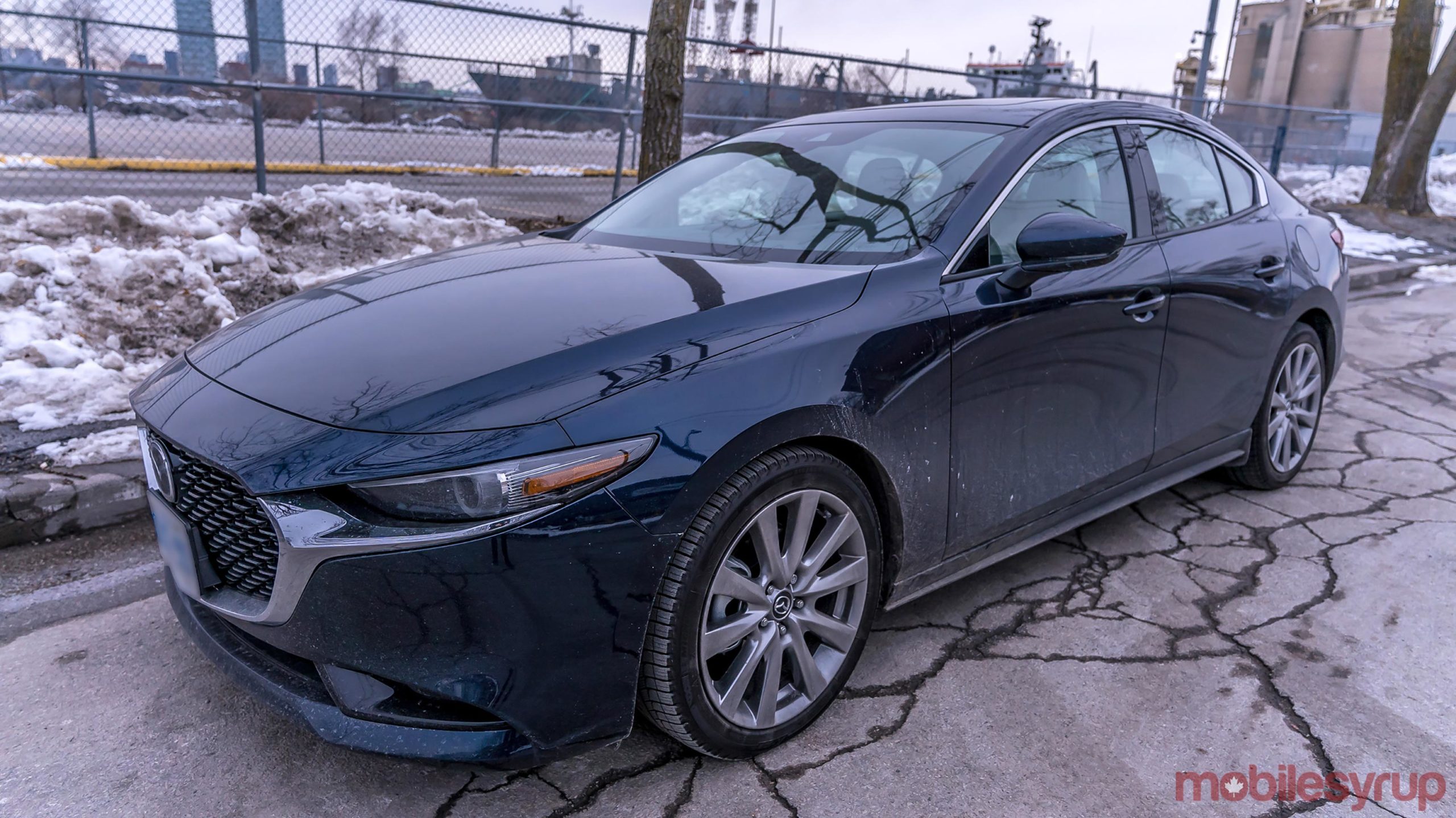 Not too long ago, Mazda was a stubborn holdout, but since embracing Apple CarPlay and Android Auto, its Connect infotainment system has quietly grown up.

This isn’t the first year Mazda supported those platforms, but since it has, the Connect with HMI Commander (for Human Machine Interface) system has leaned more on them. This time around, the automaker also opted for a slightly different input method, veering away from touchscreens in favour of more tactile integration.

I got to test it out on a 2020 Mazda3 GT AWD trim, a compact sedan that looks and drives smoothly. The rotary dial setup isn’t new, but the newer implementation means you won’t be touching the screen anymore. 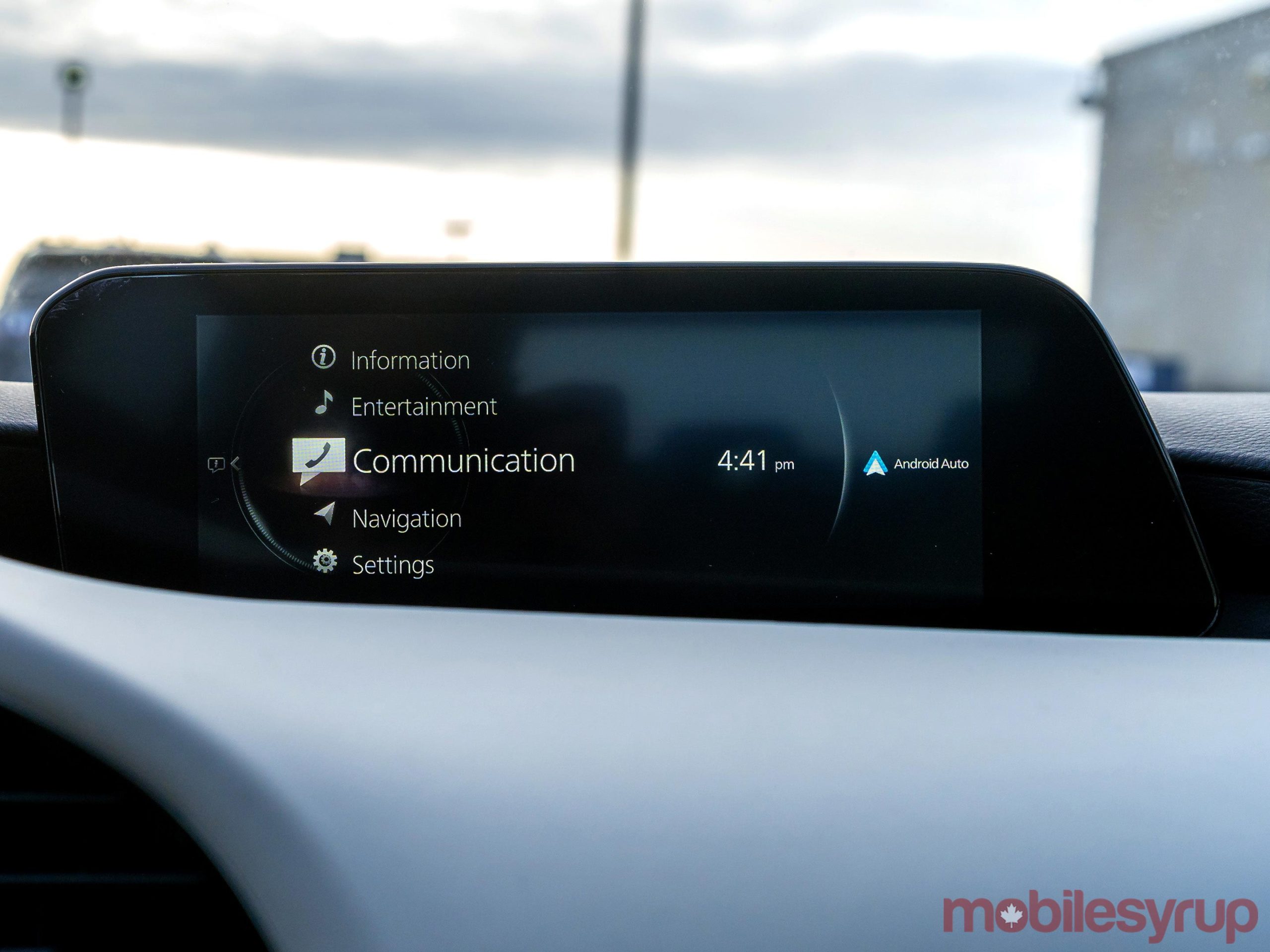 As I previously noted in my last Mazda Connect review, the automaker had gone with a hybrid setup combining an 8-inch touch display with the rotary dial. The Mazda3 has an 8.8-inch non-touch display situated deeper onto the dash to make it harder to reach purposely.

This particular trim is $32,250 with the optional upgrades and freight included. CarPlay and Android Auto are standard features, just as the new larger screen is.

The centerpiece is the rotary dial in the middle, supplemented by a smaller one that acts as more than just a volume dial. Mazda altered the layout for the surrounding buttons by removing the favourites one and moving it over below the volume dial. The others are carryovers from previous models, with back, navigation, media and home flanking the dial.

The dial also maintains the same mechanisms, where clicks correspond with onscreen movement and presses confirm selections. Tilt it up, down, left or right, and you can switch between sub-menus or sections on the display. What’s different this time around is that the volume dial carries a similar ergonomic function. For example, tilting that dial left or right can skip or repeat audio tracks, since the steering wheel’s controls cycle through audio sources, rather than tracks.

Mazda also overhauled the software UI, taking out the semi-circle menu and replacing it with a cleaner and more text-heavy layout. Sub-menus have been cut down, making it easier to get to features and functions in fewer steps. 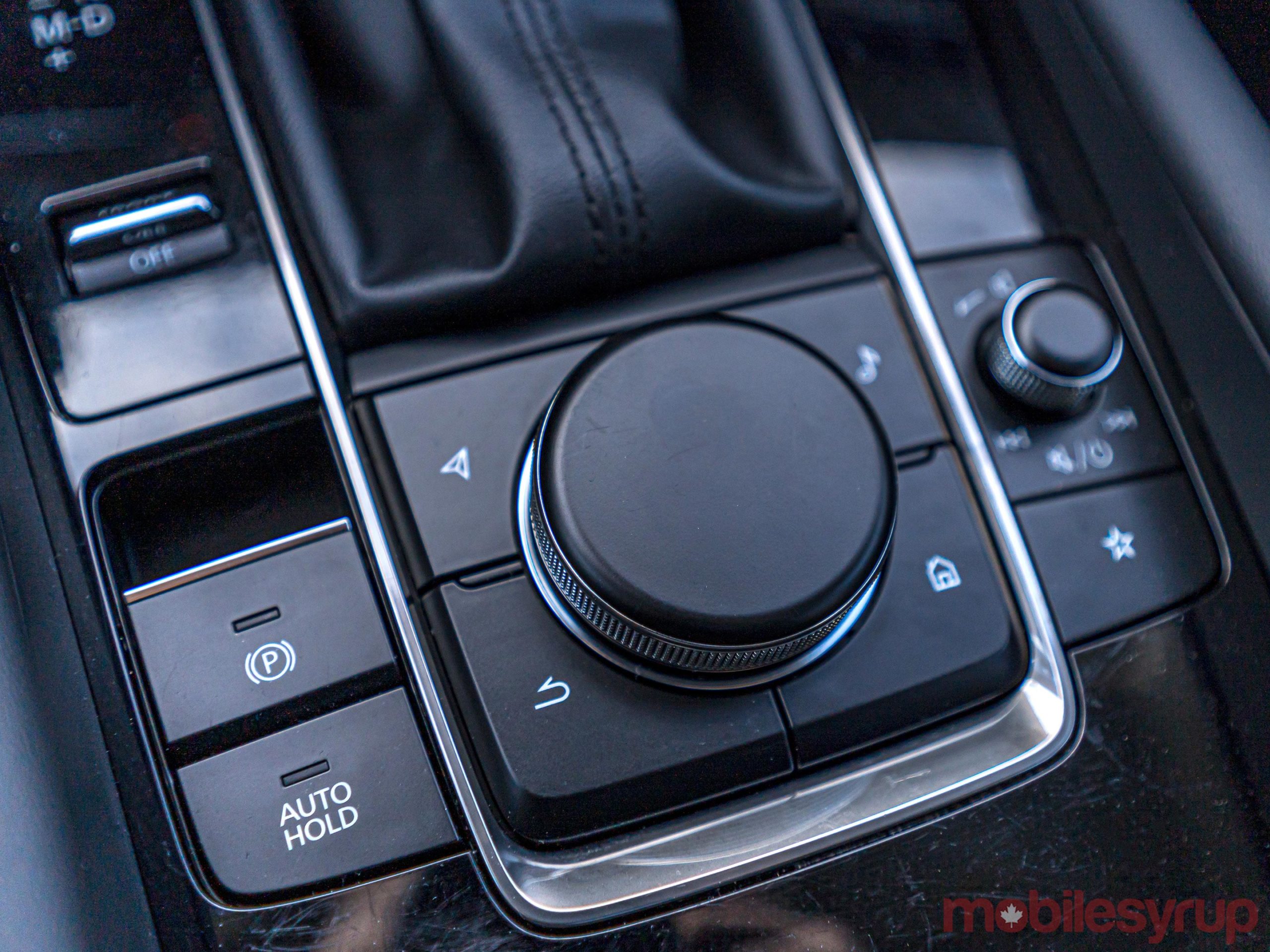 For reasons I’ll touch on later, there is no in-car LTE or Wi-Fi hotspot in the car, in spite of an embedded SIM card. As I’ll explain later, that’s also limited in scope, too.

Bluetooth is standard, as always, though it remains out of reach in one key respect. Where Siri Eyes Free works with iPhones paired via Bluetooth, the same isn’t true of Android devices using Google Assistant. For reasons that remain unclear, Mazda hasn’t plugged the gap, and so, the only way to get Google talking is to use Android Auto.

There were only two USB ports in this Mazda3, one of which was under the climate controls, which acts as the primary port for Mazda Connect integration. A second one is inside the centre console for charging devices. There are no USB-C ports anywhere in the cabin, nor an Aux-In jack to plug in that way. A 12-volt socket is included, which could add another charging option through a compatible accessory. And forget wireless charging because that’s not in here, either.

The onboard SD card slot is purely for Mazda’s own navigation map package. My test drive vehicle had it already installed, but it is an optional upgrade at the dealership after purchase, so if you decide you want it at a later time, you can get it done at a Mazda dealership. Otherwise, as before, the slot does nothing if the mapping card isn’t inside. 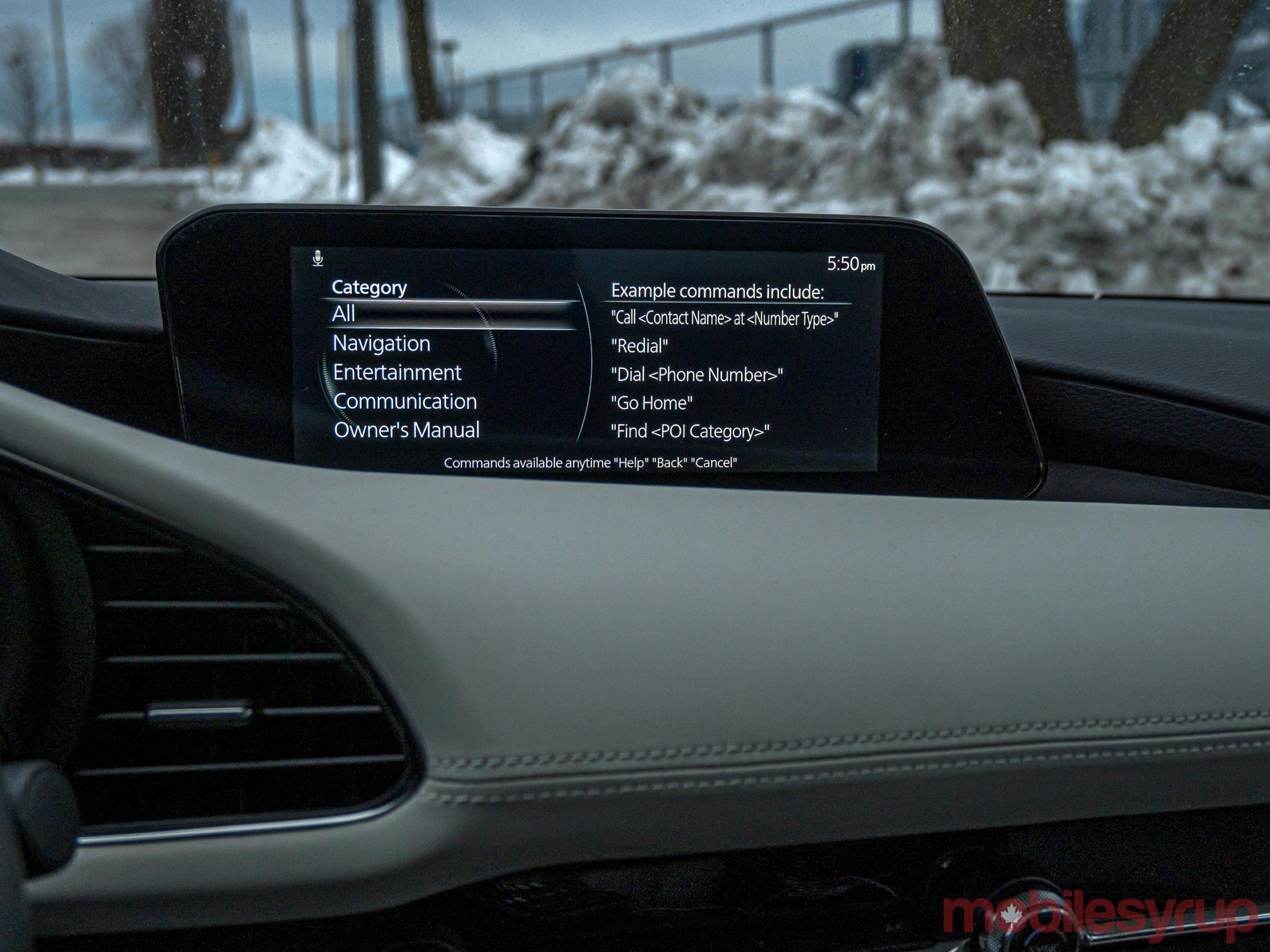 Previous versions of Mazda Connect had some limited app support, like Stitcher, Aha and Pandora, but that’s not the case here. Any app integration now falls under CarPlay and Android Auto. Bluetooth audio streaming does work perfectly fine, with accessible playback controls, and even album art.

SiriusXM is also included on a three-month trial, along with its Travel Link and Traffic Plus data services thrown in for five years when you subscribe. Nothing has changed there, given Mazda had the same deal going back to at least 2016-17 for most models.

Mazda’s own built-in voice recognition platform is slightly different, but more or less maintains the same level of performance. It’s embedded and doesn’t work with the cloud at all. This means any updates would have to come from a dealership, rather than over the air.

When paired with a phone, it handles text messages reasonably well, including the ability to read them out loud. Once a message comes in, you have the option to select ‘Read’ on the screen, where it appears visually and is read aloud by the embedded voice platform. Incoming messages while CarPlay or Android Auto are running go through those platforms instead.

In fact, Mazda’s own voice is silenced once either of those two are running, putting Siri or Google Assistant in charge. It works well, though one downside I noted was that I couldn’t tune to an FM or AM radio station by voice because that integration only works through Mazda’s voice activation. And interestingly, while Mazda Connect can handle incoming messages, it doesn’t go the other way. Every time I tried verbally sending a message or responding to one by voice, I couldn’t do it, forcing me to plug in and use Siri or Google Assistant instead.

As a voice assistant to navigate Mazda’s own features and options, it’s not bad, but lacks any real integrative depth to make it something you would rely on regularly. 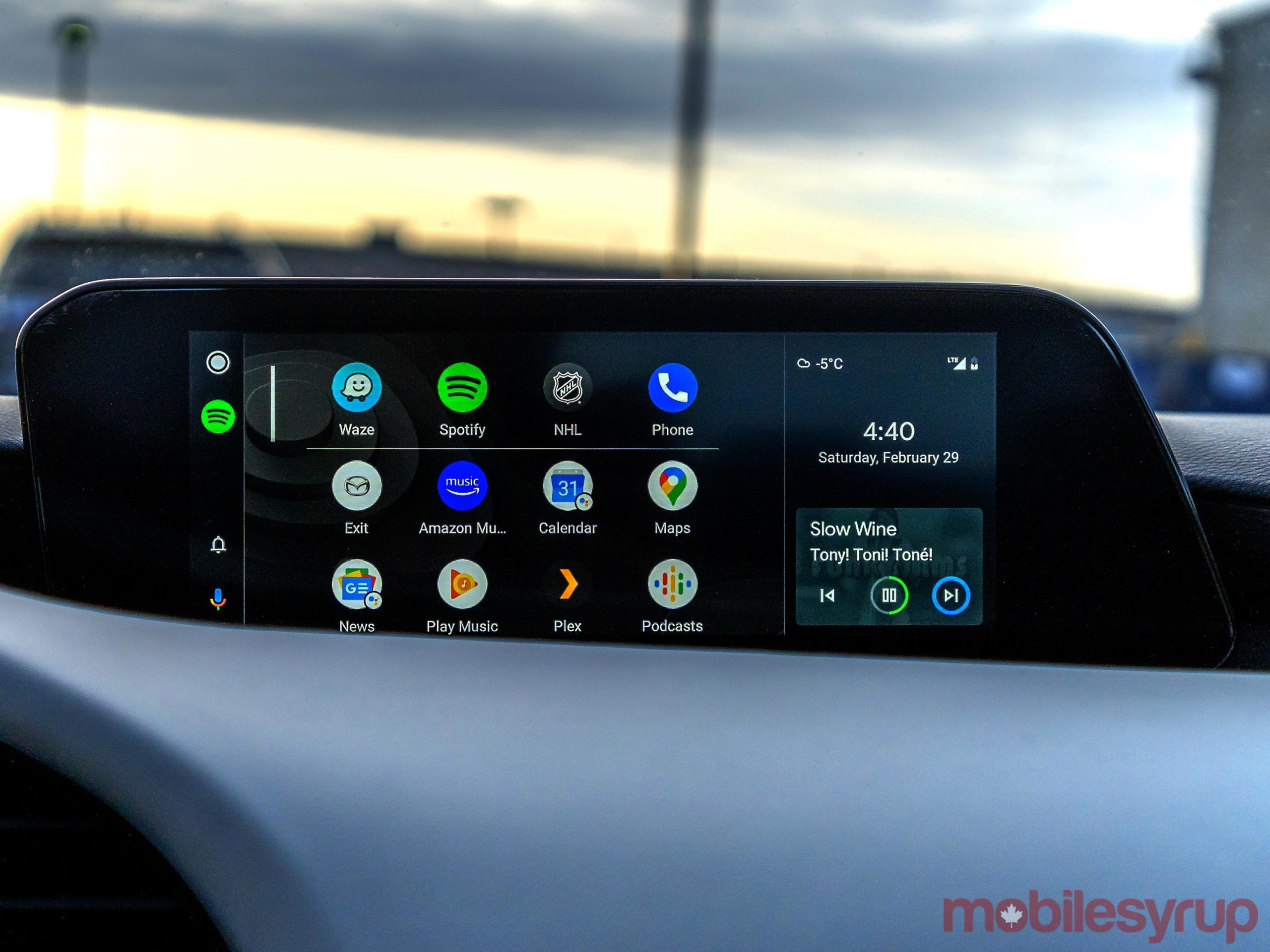 The newer version of Android Auto is better suited to setups like the Mazda3. The older card-based layout felt clunky with a rotary dial input, whereas the new grid-based UI is easier to deal with.

Not that there weren’t a couple of odd kinks in the mix. For reasons I couldn’t troubleshoot, Google Assistant would go silent while the vehicle was in motion. The familiar multi-colour pop-up and ping would be there, except never register a command or query.

At first, I thought it was because my Pixel 4 XL was set at “Phone Only” under Bluetooth settings. Switching it to “Phone and Audio” initially worked, only to stop afterward because it kicked me out of Android Auto and stuck with Mazda Connect. I recreated the steps, and realized that the Assistant was working just fine when the car was in park (and in Phone Only), only to freeze once I started driving.

The same issue happened with a Samsung Galaxy S20 Ultra, but nowhere near as often, so I can’t be sure which part of the equation gets the blame.

In addition, because of the way Android Auto is laid out, tilting the dial to the left or right switches between the different segments onscreen, and not playback. I then tried the volume dial, and found that tilting that left or right skips and repeats tracks. Curiously, both dials can do that in CarPlay, possibly because its layout isn’t split up the same way onscreen.

Other than that, everything worked as it should. As Apple and Google continue to improve these platforms, the easier it is to use them, regardless of the input method. 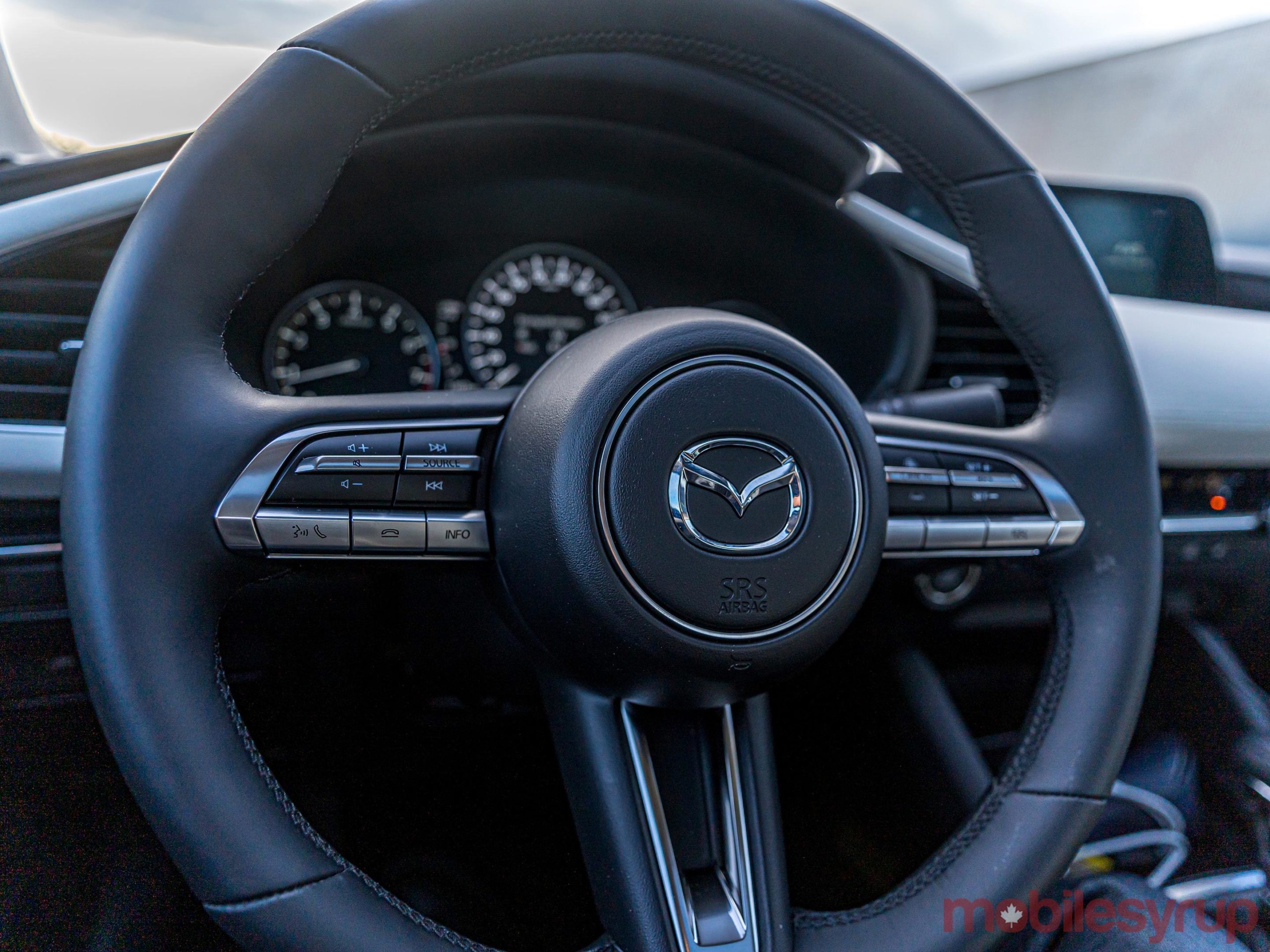 Mazda used to have a direct link to certain vehicles with its Mobile Start app, which enabled drivers to remote start and lock their cars, but that wasn’t an option with this car. Based on the app’s website, it’s not an option for anything in the 2020 lineup, which I confirmed with Mazda Canada.

Not only that, but the subsequent MyMazda app also isn’t available in Canada yet. Mazda Connected Services works through that app in the United States, bringing in the controls of Mobile Start, and adding over-the-air updates to the infotainment system.

It offers remote start/stop, lock/unlock, vehicle locator, diagnostics, anti-theft notifications and sending destination addresses to the car. This is standard fare for some other automakers and their apps, but since Mazda has an exclusive arrangement with Verizon, Canadian drivers can’t access it. Whether or not vehicles can be retrofitted to work with it once the gates open isn’t clear, though future models are expected to get it eventually. 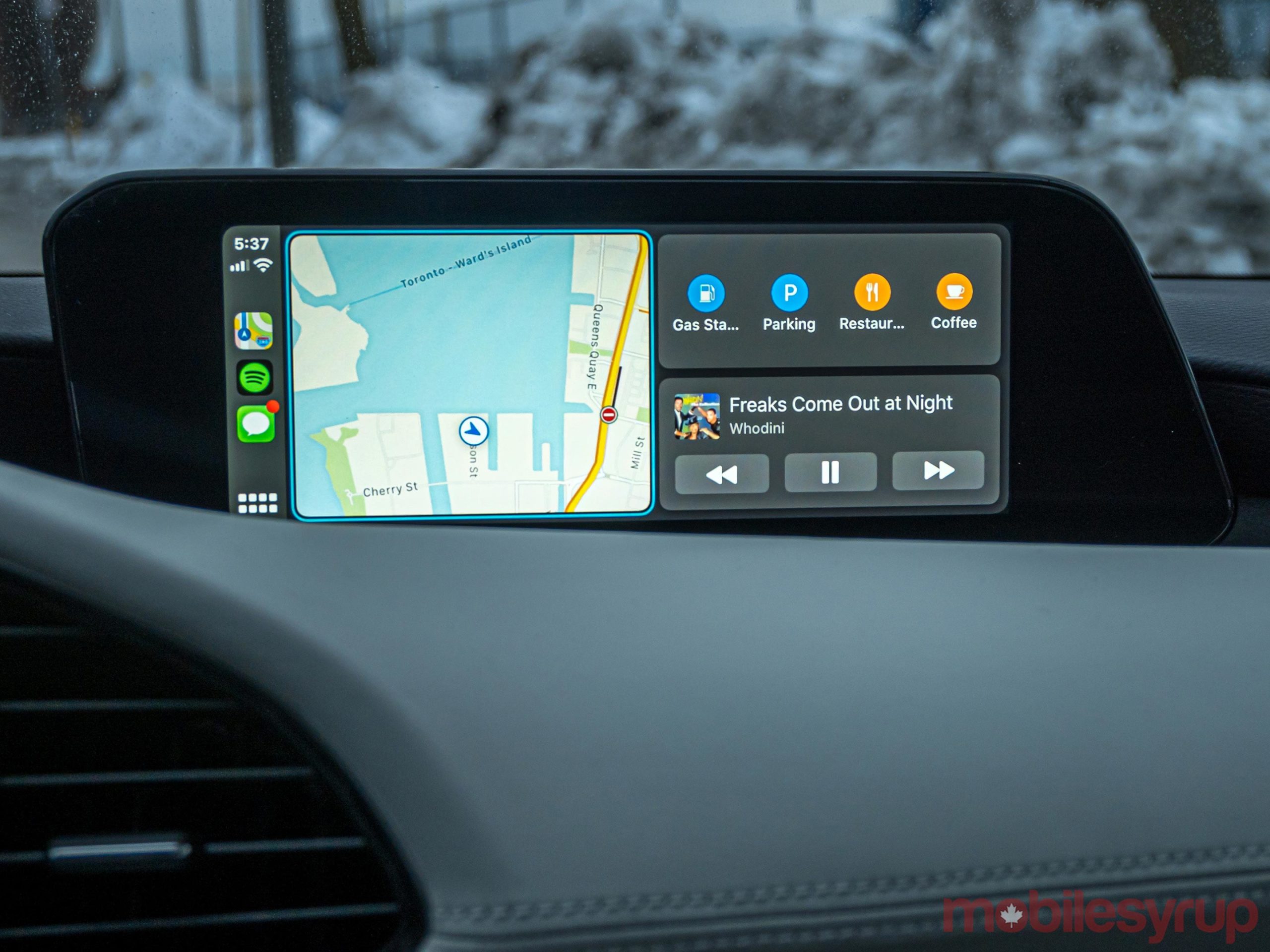 Speaking of retrofits, Mazda does offer that for some models of the recent past. Mazda made CarPlay and Android Auto standard on all 2019 Mazda models, except for the MX-5 that added it for 2020. There are several prior models eligible for a retrofit to bring both of those platforms in. The current list is below:

Mazda Canada dealerships charge a one-time fee of $445 for the install — maybe less, depending on the dealer. While it’s mostly a software update, installers do need to take apart the centre console and replace the USB ports with current ones.

Mazda’s new-look Connect is more nip and tuck than drastic makeover, but it works well as a user-friendly system. With a pretty barebones layout and native feature set, it’s your own phone that really brings it to life through CarPlay and Android Auto. It’s just too bad there’s no native Mazda app to work with it, nor an in-car hotspot to get a little more out of the connectivity. That’s why it’s simple, yet quietly efficient.

I’m not sure if the Google Assistant issue I encountered was an aberration, though I suspect it likely is. Assuming it’s on Google’s end, an update to the Android Auto app could presumably fix that. If not, then Mazda may hear more drivers seethe with frustration before they take care of it. Time will tell.

"With a pretty barebones layout and native feature set, it’s your own phone that really brings it to life through CarPlay and Android Auto"