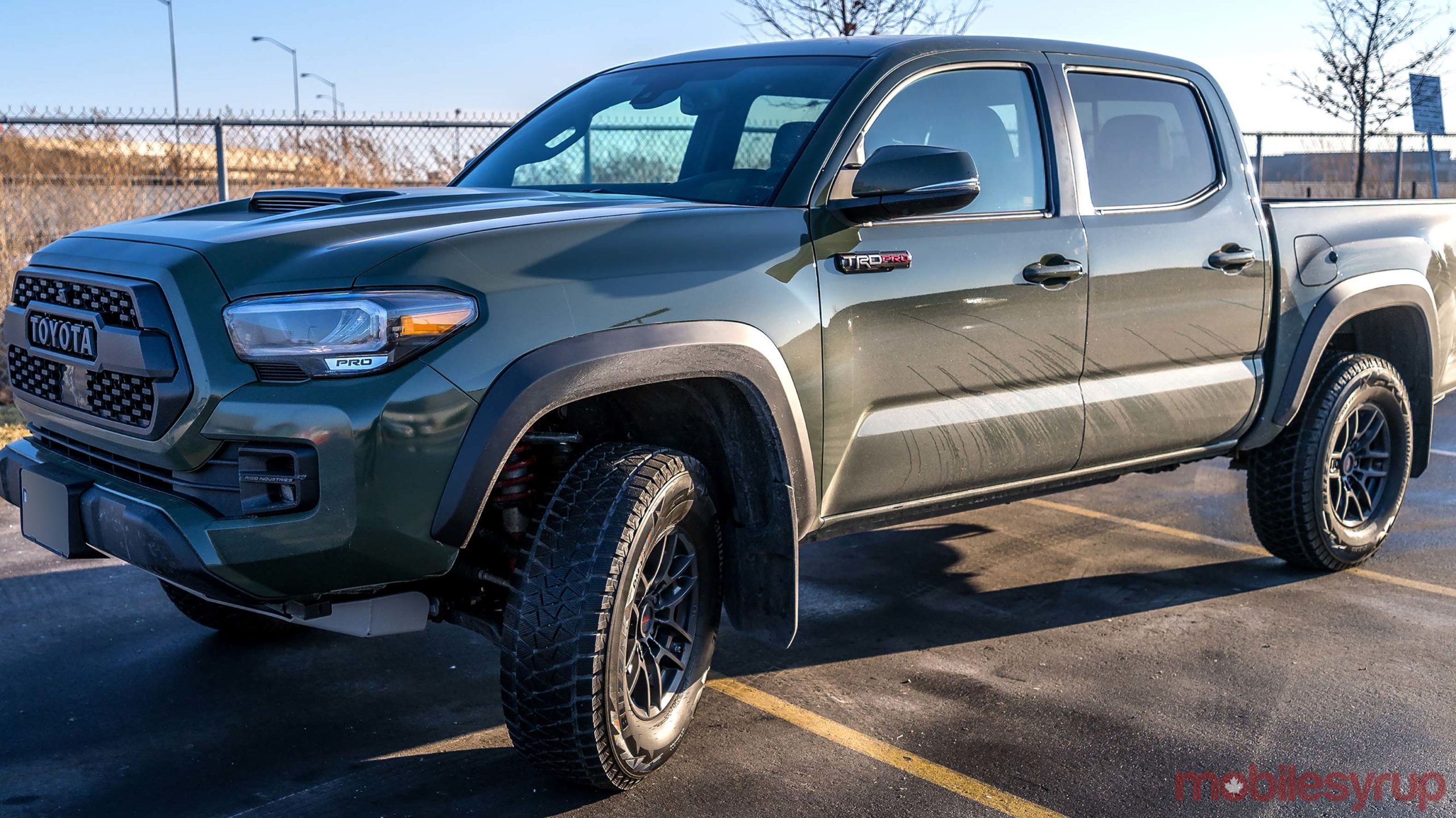 It was only two years ago that Toyota brought its Entune infotainment system to Canada, but now with 2020 upon us, it’s waving it goodbye.

Toyota ended its infotainment isolation when it adopted Apple CarPlay, starting with the 2019 Avalon, and subsequently moving on to a handful of other 2019 models, followed up after that by several more in the 2020 lineup. Android Auto was left out until the automaker announced it would be adding Google’s platform to the 2020 Tacoma, 4Runner, Tundra and Sequoia.

The resulting combination here is a significant shift the other way for Toyota. Long a holdout in letting Apple and Google do anything in its dashboards, it appears to be embracing them in a big way. 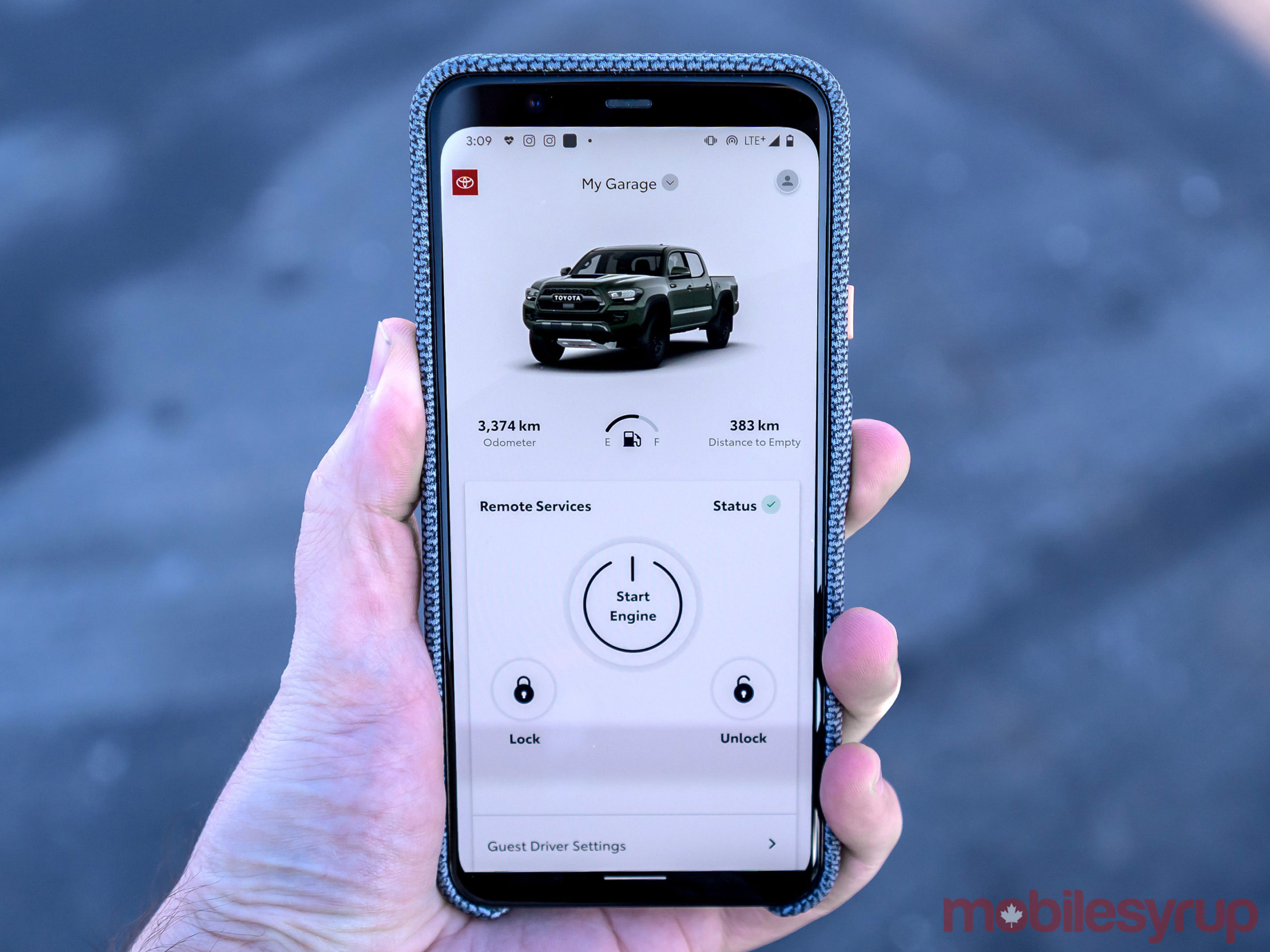 Previously, Entune was the infotainment system unto itself, but it now plays a middleman role. Much of the Linux-based software Toyota would’ve used for that platform makes up the middleware that supports what is currently available now.

All the previous app integration Toyota pushed — Scout GPS Link, plus the other ones that came with it — are gone. There is a built-in navigation map, though not a match for Google Maps and Waze. Maybe out in an area where cellular coverage is low, but otherwise, it’s nothing to get excited about.

Even third-party apps Toyota previously integrated, like Yelp, Slacker and NPR One, are all gone too. The only app I saw in the ‘Apps’ section was Toyota’s own for connecting to the vehicle, which I’ll touch on later. 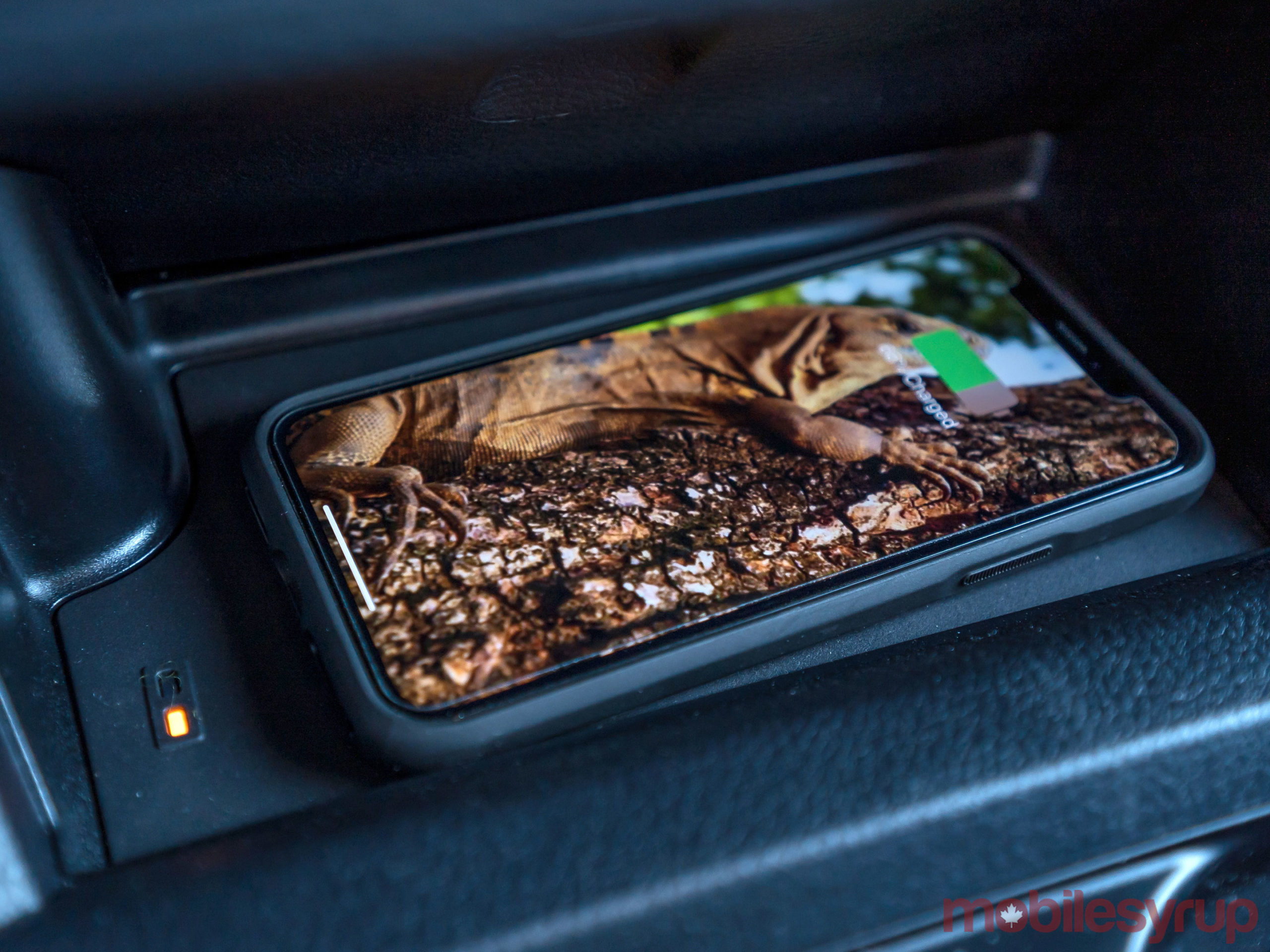 As is now typical for most Toyota vehicles these days, the Tacoma has a dedicated USB port under the climate control for plugging in smartphones. I was surprised that I didn’t see an extra port beyond that, including inside the centre console storage bin, but the 12-volt socket offers a way to remedy that through a plugged-in charger.

There’s also the Qi wireless charging pad in the space below the connectivity ports. Any phone supporting the standard works just fine, and Toyota included a button to turn the feature on or off. It doesn’t function as its own physical input, meaning you can’t run CarPlay or Android Auto through it. However, it can stay connected via Bluetooth when charging there.

Speaking of Bluetooth, Siri Eyes Free and Google Assistant both work when phones are paired. Toyota also maintains its preference for mapping those voice platforms to the steering wheel’s call button, rather than the voice button, which only works with the automaker’s own voice assistant.

There is an in-car SIM embedded in the vehicle, though still no Wi-Fi hotspot to use. The connection is purely for over-the-air updates to the infotainment system and communicating via Toyota’s mobile app.

The 8-inch display (7-inches if you go with the base trim) looks to be the same as previous Toyota models. It’s relatively bright, though not with the same level of sharpness that I’ve seen in other cars. Despite that, it does have improved responsiveness and pinch-to-zoom is better as a result.

Shortcuts to various points in the system are still lined up along the sides of the display, with dials for volume and tuning along the bottom. 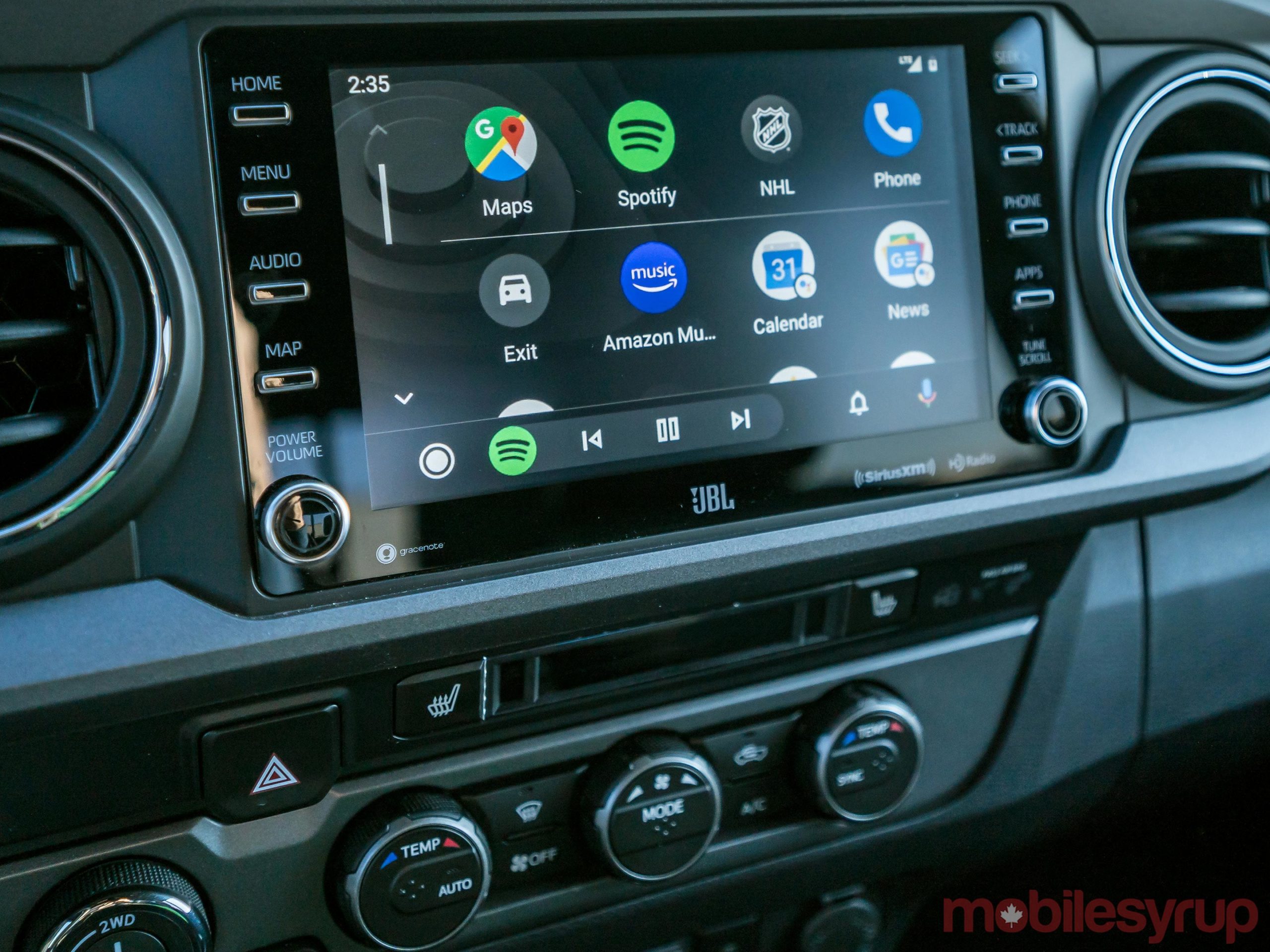 Only two years ago, this scenario seemed out of reach for any Toyota owner, unless they managed to install an aftermarket head unit. Apple, and especially Google, were persona non grata for years. Seeing them in this vehicle was interesting, primarily because they are so dominant throughout.

Without either CarPlay or Android Auto running, Toyota’s Connected Services don’t offer much on the table. Once you plug in an iPhone or Android device, however, the full breadth of those platforms comes to the fore. It’s why I viewed this as a transformative about-face.

But it’s one that makes sense. Toyota owners, be they existing or prospective, lamented the absence of what was readily available from competitors. The timing, while late, at least benefits from the facelifts both recently received. The new-look CarPlay home screen is a big step forward in accessibility, while the revamped Android Auto is a major improvement, in my opinion.

There was an odd usability caveat I noticed. With a phone plugged in, the home screen would show CarPlay or Android Auto occupying one of the sections. When I tapped it, it took me to the audio page, where I had to tap the corresponding platform again just to get to the interface. Not a deal-breaker, but unnecessary when there’s a physical audio button that would take me to the same screen. 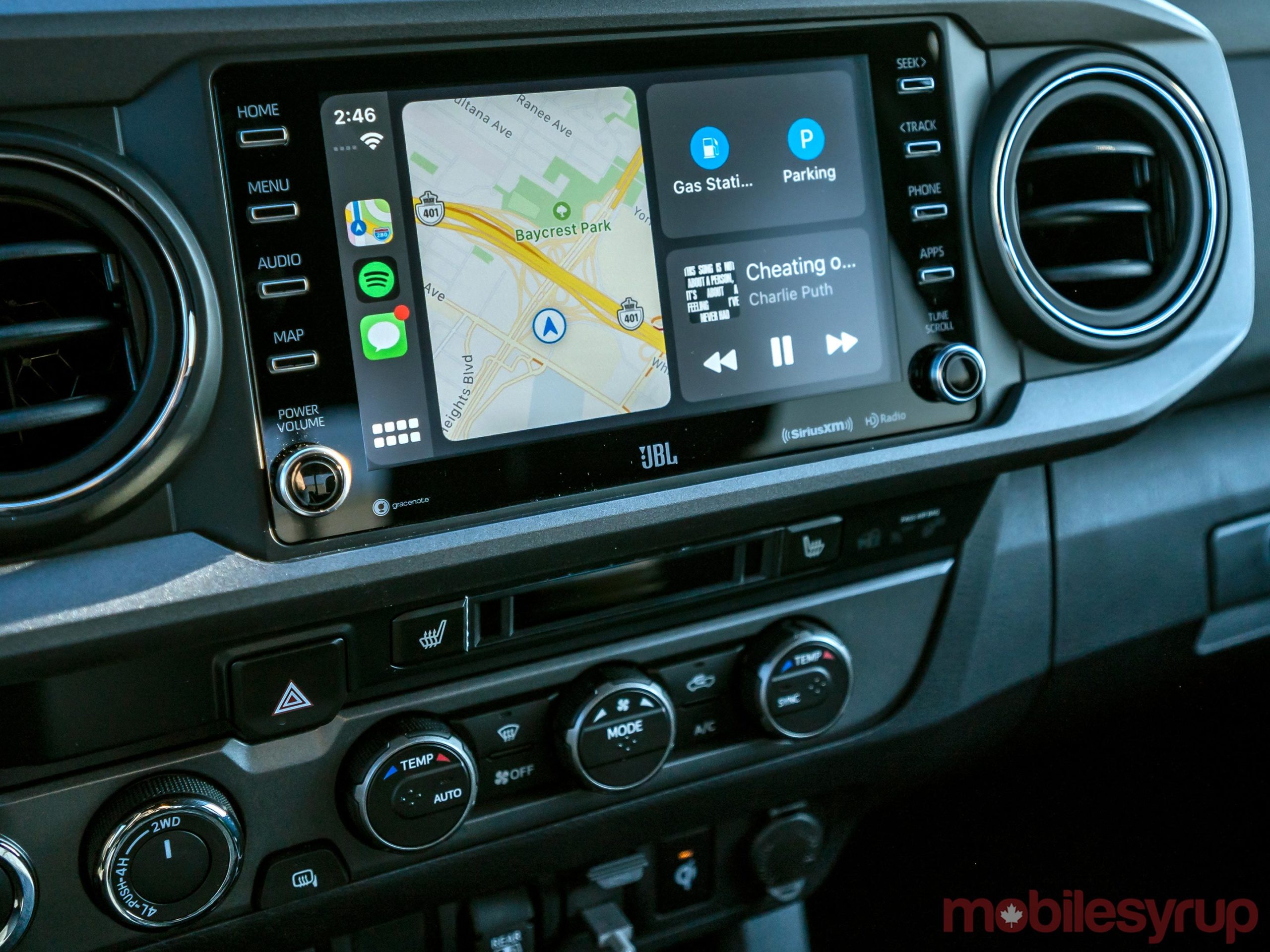 If I pushed the menu button, I would see a grid of options. Selecting CarPlay or Android Auto from there usually led to a direct shortcut. Again, not anything terrible, only less efficient than it could’ve been.

Otherwise, both platforms worked as expected. I would have liked to see the integration go so far as to show Google Maps or Waze on the Connected Services home screen (only the built-in nav shows up there), but I guess it would’ve been too much of an integration at that point.

I do like that Toyota maintained quick access to four chosen contacts on the home screen, making it easy to communicate without diving further into the system. 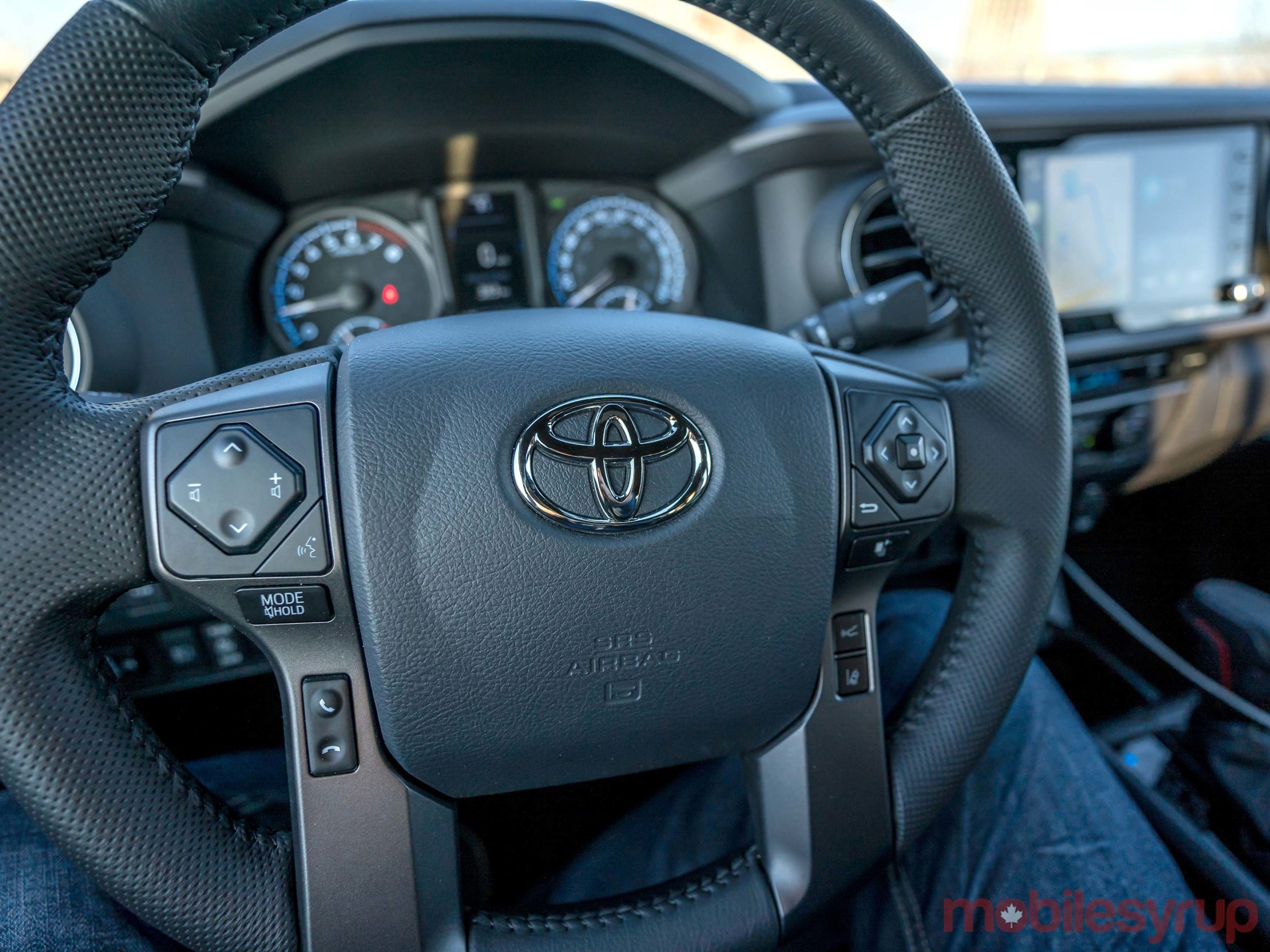 As I noted earlier, two voice platforms run parallel to one another. If you want to use Siri or Google Assistant, you can certainly stick with those, but Toyota feels its own platform can step in too. It uses the same 10-step training process, where you have to read different phrases to help it learn your voice.

It’s not bad at all, mainly because it removed some of the needless back-and-forth of prior versions. For instance, you would have had to qualify what you wanted to do by verbalizing the category you wanted. For texting, you would’ve had to say, “messaging” first before issuing a command.

Now, saying “send a message to (name)” gets the job done, provided it’s a contact in your phone’s address book. I had less luck doing it with phone numbers, presumably because it didn’t always catch every number I spoke.

For calls and messages, Toyota’s voice recognition system is quite good, but I often leaned toward Siri or Google Assistant to cover those bases, especially since I could also message on WhatsApp.

Bringing in CarPlay and Android Auto also dramatically changes the music experience. Bluetooth audio streaming is pretty much unchanged, which is fine, but being able to play music by voice command is always great. Spotify, Apple Music, Google Play Music, Deezer, Tidal — all of these apps would never have been integrated otherwise.

The Toyota app is not to be confused with the Entune app. They are two separate things, and the latter played no role with the 2020 Tacoma. The primary functions are basic communication with the vehicle, like remote starting, locking, mileage and last known location. When I used it, there was always a 10-15 second delay between pressing one of the buttons on the app and seeing it happen in the vehicle. Anytime I remote started, the engine would shut off once I unlocked the doors to get in.

Toyota did throw in some other features to add some peace of mind. There are sections for valet, friends and family, where you can set restrictions on how far they can drive. The catch is that the restrictions aren’t binding, meaning the vehicle can go past them. It’s just that you would know they did by looking at the app as the administrator afterward. Great for helicopter parents and scrutinizing a shady valet, but also making sure it’s handled with some care.

There’s also a driver score section. Nothing binding here, either, just more a measure of how much TLC the driver delivers with things related to speed, braking and turning. 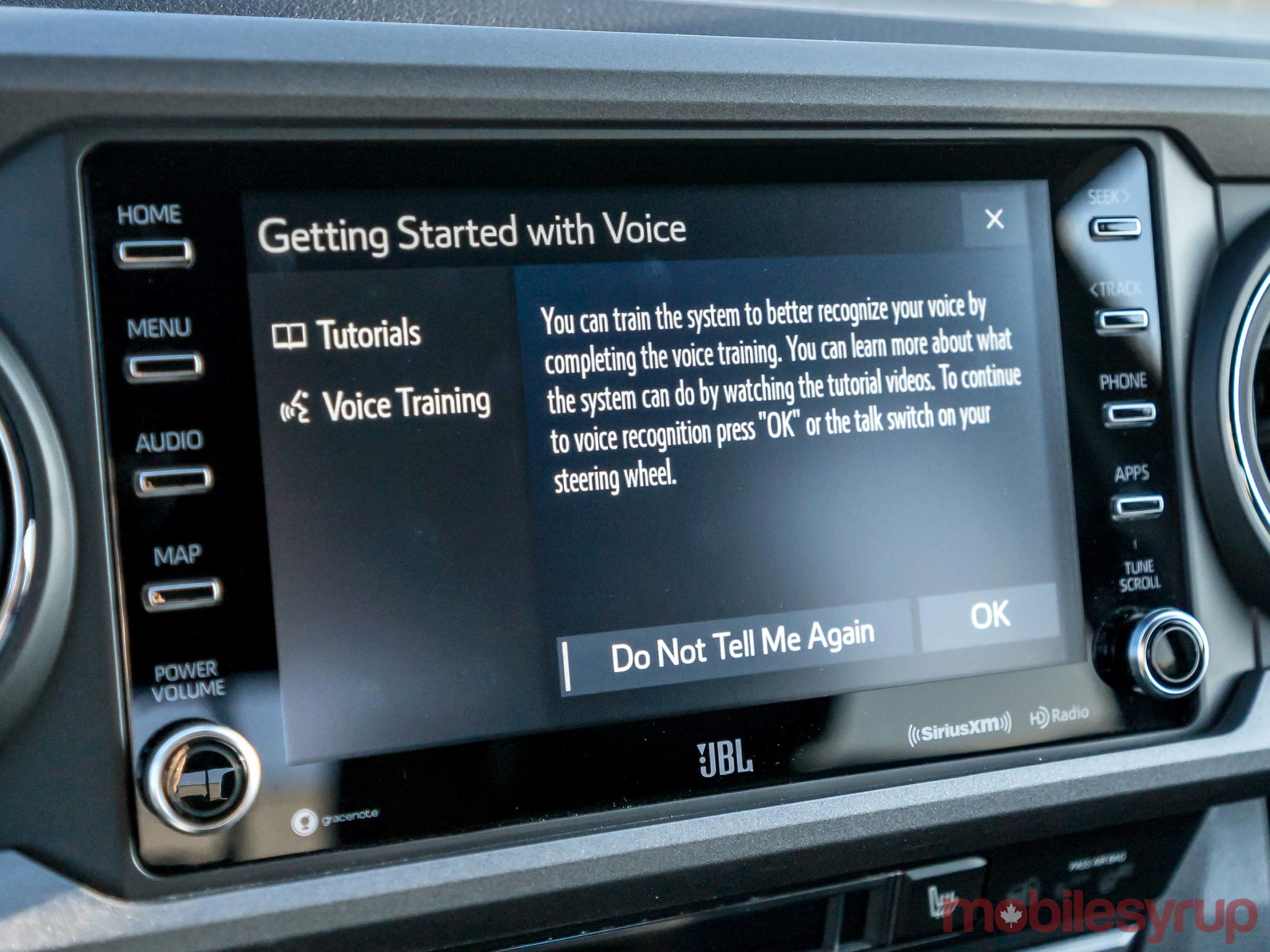 In the United States, the Tacoma also has Amazon Alexa built-in. Don’t expect it to come to Canada with a future update, as there are no plans to do so.

However, other Toyota vehicles are currently available for CarPlay retrofits. The eligible models are the 2018 Camry, 2018 Camry Hybrid and 2018 Sienna. Up until December 7, 2019, it cost $60 to get the job done at a dealership if you exceeded the 3-year/60,000km Basic Warranty period. It’s still $60 if you’re under that, but not clear what it is if you’ve gone past those limits.

Unfortunately, Android Auto isn’t in the mix, and the retrofit doesn’t apply to Google’s platform. That’s the current situation, which may or may not change. I didn’t get any confirmation that it would.

Whether the company will admit it or not, it has waved the white flag to Apple and Google. Its infotainment setup, as it is in vehicles like the 2020 Tacoma, cedes a great deal of control to those tech giants.

Drivers and passengers certainly benefit from it because of the improved access and integration they offer. What would have been a good move years ago has finally happened.

By doing so, Toyota also addressed a big pain point for its customers. You can have a car or truck that drives and maintains well, but if there’s little to rave about with the tech inside the cabin, it’s easy to look elsewhere.

And so, the isolationist approach is over. It’s just a shame that retrofits aren’t more extensive.

"Whether the company will admit it or not, it has waved the white flag to Apple and Google"