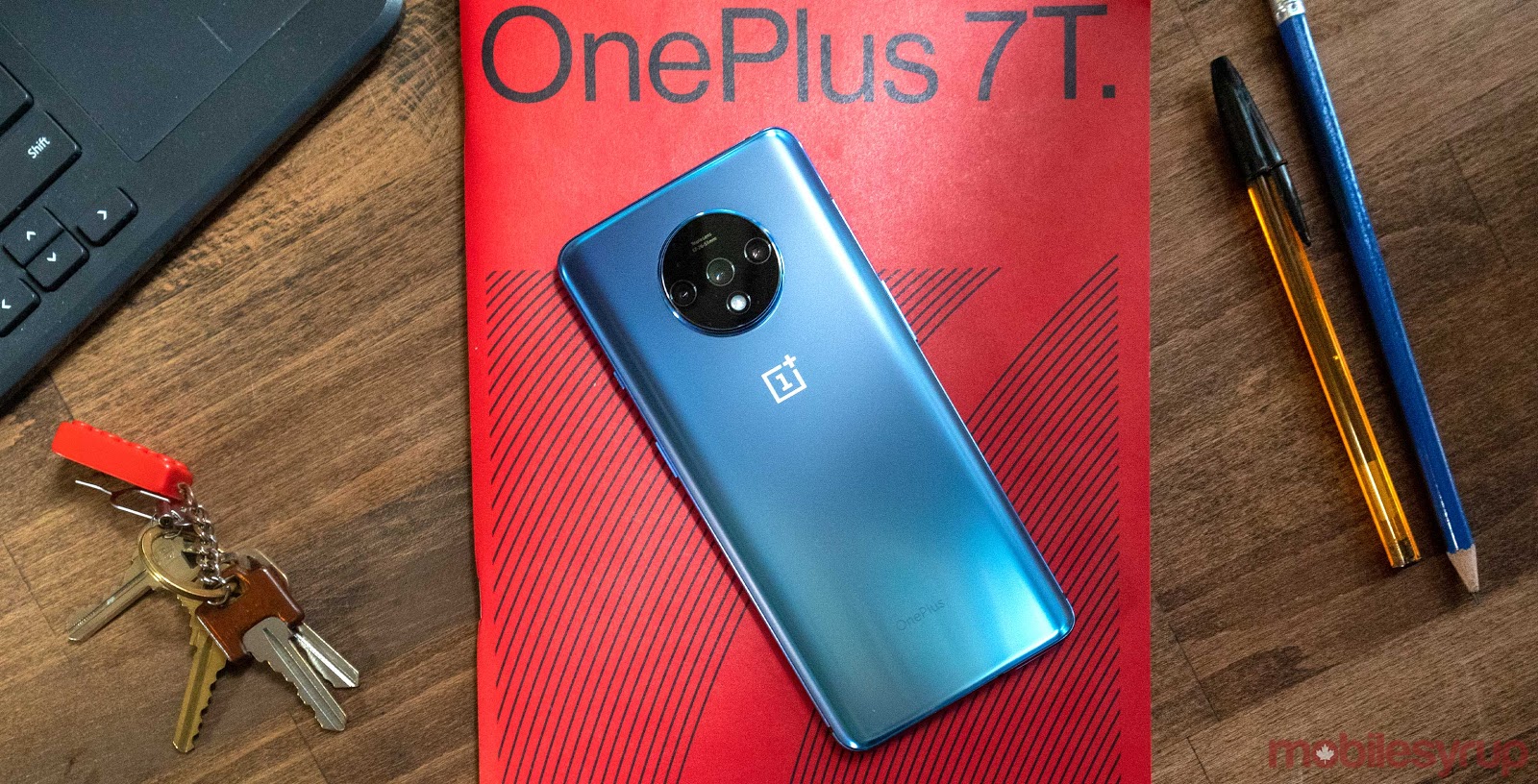 It’s that time of year again when OnePlus releases a new device. This time around the company has shaken up its release cycle in the Canadian market.

This shift resulted in the new OnePlus 7T, which sits below the OnePlus 7 Pro in the company’s smartphone hierarchy. To be clear, this in no way signifies the OnePlus 7T is an inadequate handset. It’s filled to the brim with nuanced features, and I see it as the most consumer-friendly smartphone the company has released in some time.

OnePlus launched as a brand that offered great phones for an attractive price. As the years progressed, the company slowly started charging more for its phones, which culminated with last May’s OnePlus 7 Pro. The $800 7T is a return to form for OnePlus with its high-end features for a reasonable price.

The OnePlus 7T is perfect for the Canadian market since it’s cheaper than the 7 Pro and offers a parallel user experience in the areas that matter.

Attention to the details 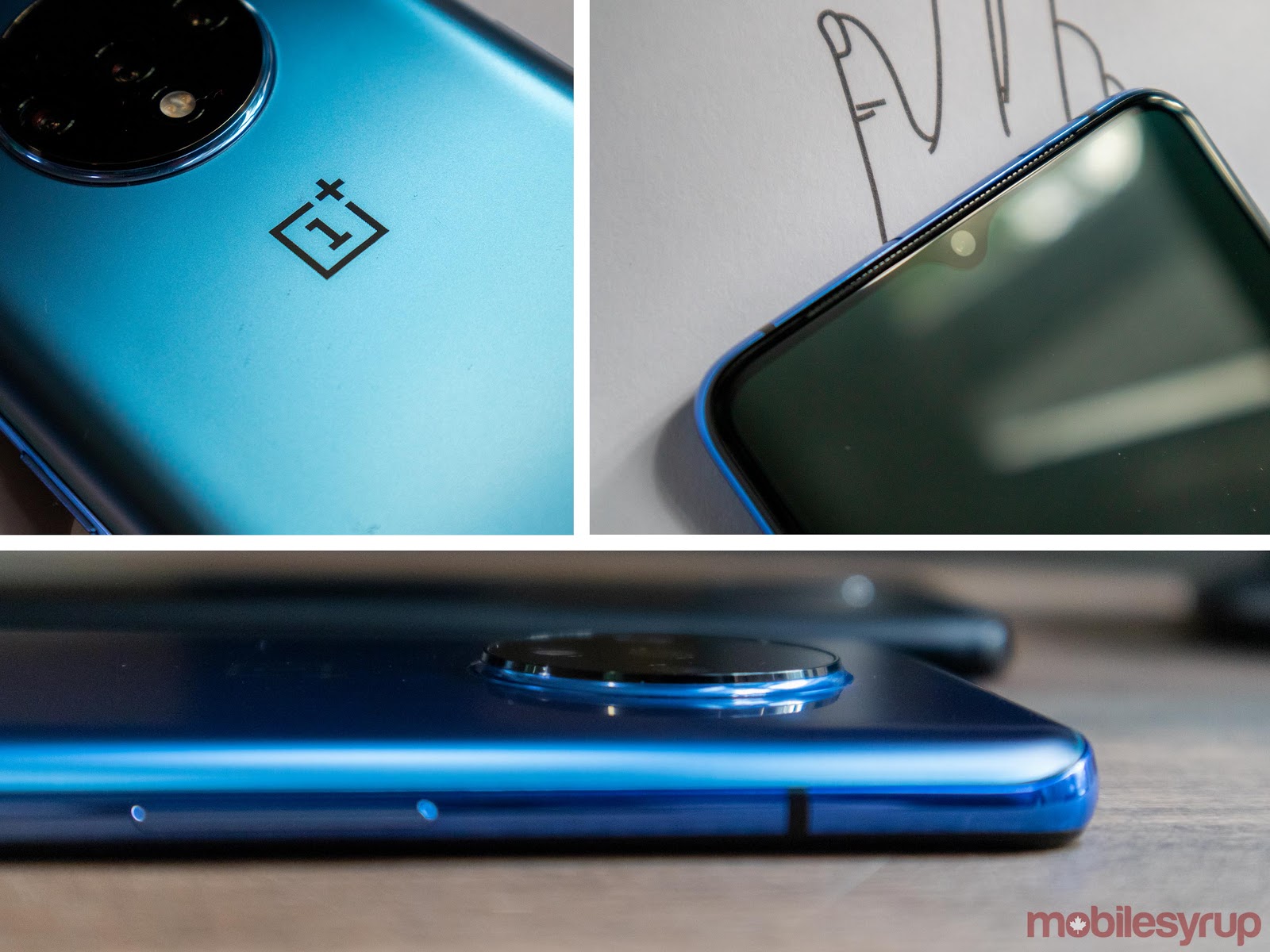 The OnePlus 7T is a decent looking phone if you can get used to its massive camera bump. From a design standpoint, it gives the back of the handset a touch of personality that helps it stand out. That said, it’s a bit large, and I worry about scratching it every time I put it down on a table.

The new smartphone is a little bit smaller than the OnePlus 7 Pro. It comes in at about 161mm tall, 74mm wide and 8.13mm thick. While this is still a large phone, I was able to use it comfortably with one hand.

OnePlus is once again offering a colourful version of its latest phone with a new shade of blue. This time it’s called ‘Glacier Blue.’ Users can also buy the phone in ‘Frosted Silver,’ which features a gray and silver gradient.

About that camera bump: it’s enormous. The bump consists of three lenses and an LED flash. It’s hard to defend the flying-saucer-sized protrusion, but in day-to-day use, it isn’t overly noticeable.

The 7T weighed in at 190g, which is a little lighter than the 7 Pro and a little heavier than the 6T from last year. This weight helps the phone feel solid in hand. I’ve often felt that older OnePlus devices are too light and that makes them feel more delicate than they are. 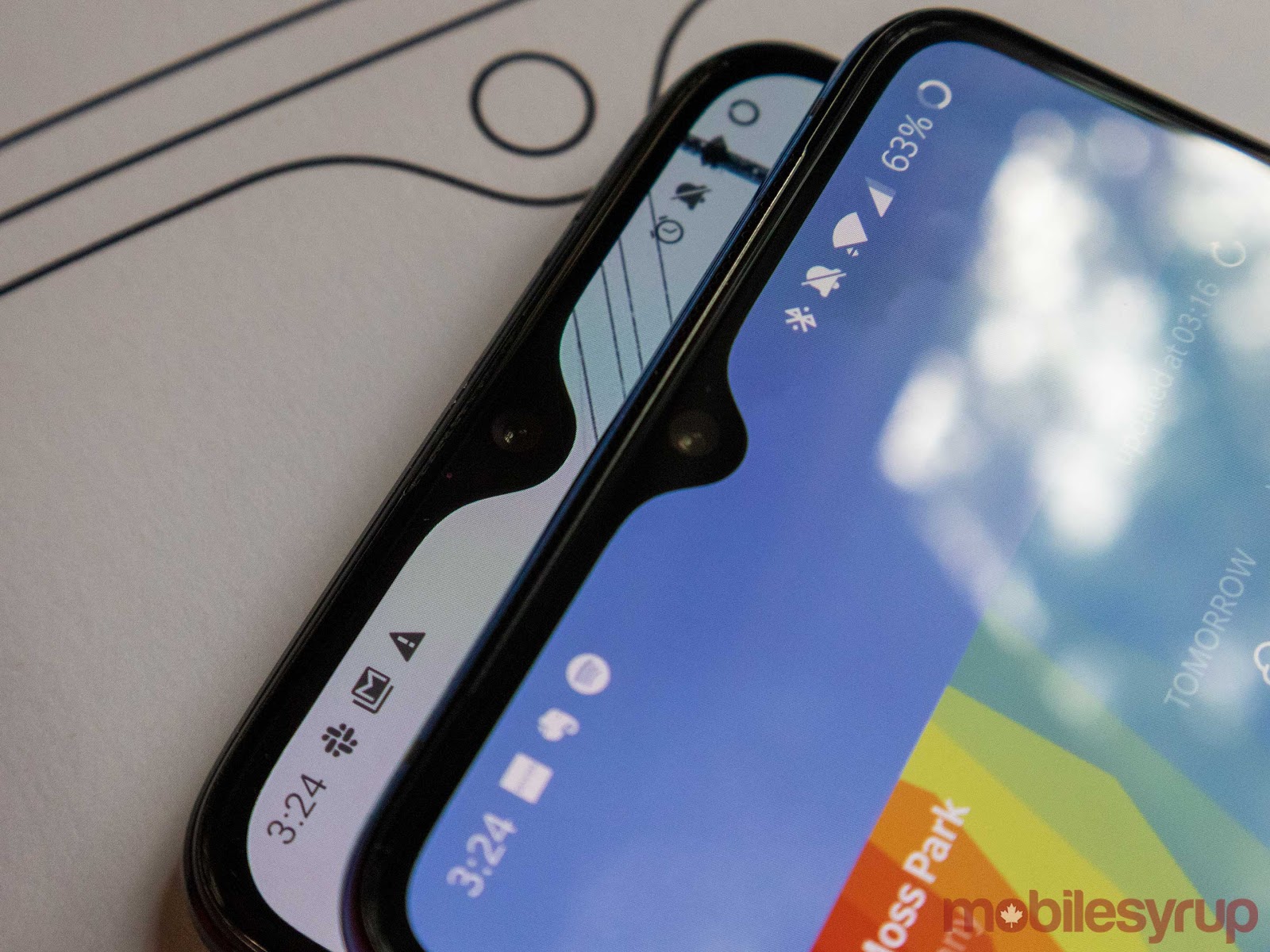 The phone is rocking a 6.55-inch screen with a tiny waterdrop notch that’s smaller than the 6T’s. While it’s sad to see OnePlus move away from the fun pop-up camera the 7 Pro features, the notch helps to lower the cost of the phone, and that’s a win for consumers. For the sake of comparison, the 7 Pro’s screen is 6.67-inches and the 6T’s is 6.41-inches.

OnePlus also implemented the large earpiece speaker from the 7 Pro in the 7T for stereo audio. This helps when playing games and watching videos. Further, it means the 7T is plenty loud. That said, it’s still too easy to cover the bottom facing speaker with your hand. 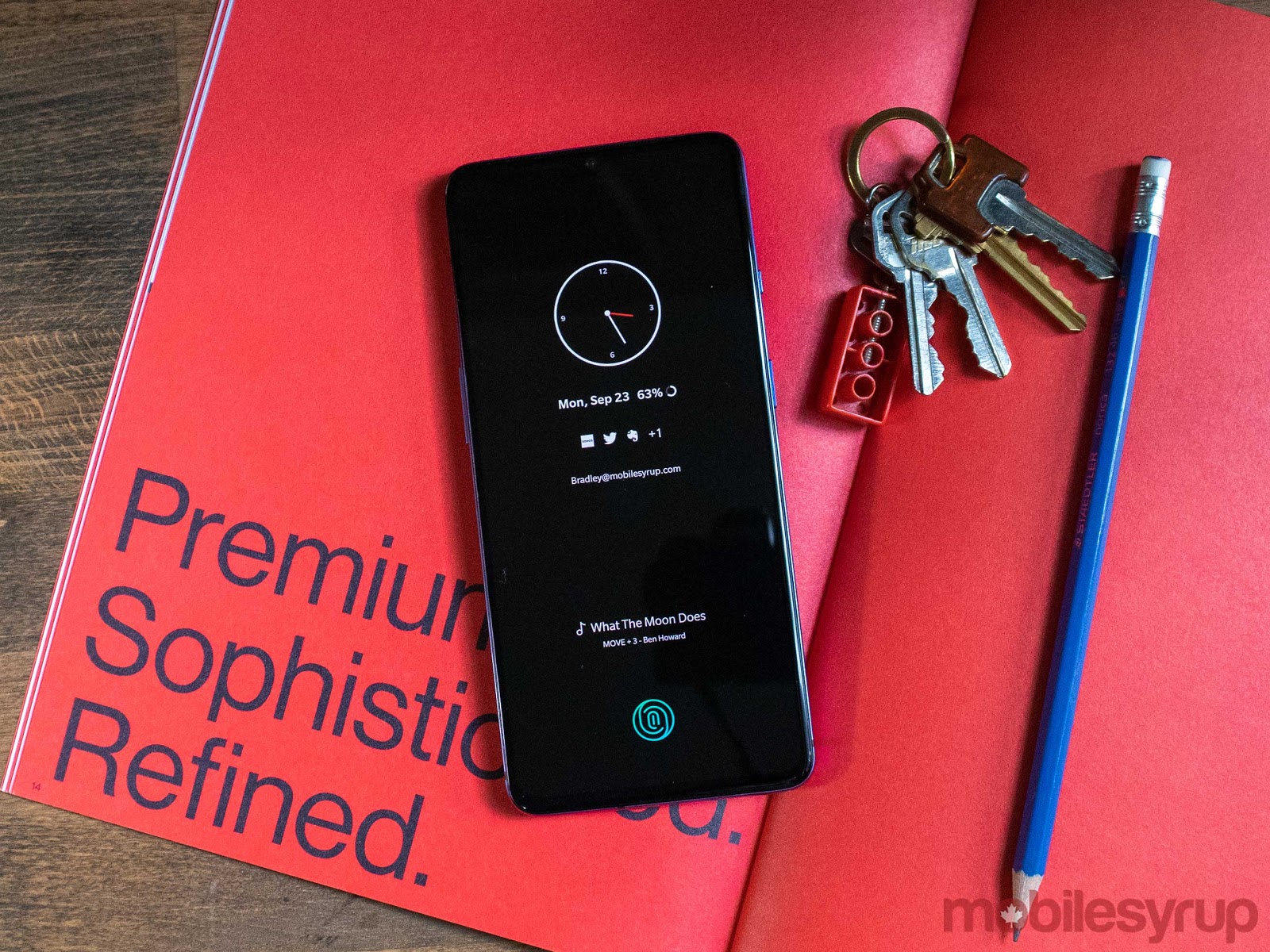 The OnePlus 7T’s screen even has a few tricks up its sleeve.

This time around the company added a 90Hz Fluid AMOLED display with support for HDR10+, so watching content and playing games on the screen is a dream. While it isn’t as crisp as the 7 Pro’s, it features a 2400 x 1080 pixel resolution (402 ppi), which means the screen looks sharp enough for just about everything. It’s also a lot brighter than the 7 Pro so using it in the sun isn’t an issue.

There’s also a new internal luminescent material that blocks roughly 40 percent of the device’s blue light output which is better on your eyes.

On the inside, OnePlus features Qualcomm’s new Snapdragon 855+ chipset and 8GB of RAM. The phone is blazingly fast as a result. When scrolling through the operating system I never experienced any lag and I was able to play graphically intense games like Asphalt 9 and Darkness Rises without any issues. Coupling this with the device’s 90hz refresh rate makes for an excellent gaming experience.

The phone also has enhanced haptic feedback like the 7 Pro. And oddly enough, this is one of my favourite parts of the 7T. Going from a OnePlus 6T where I had to turn the haptics off since they were so blunt, to the precise vibrations on the 7T felt like a breath of fresh air. Everything from typing to using Android 10’s new gesture navigation scheme feels natural and interactive with the latest haptic motor. 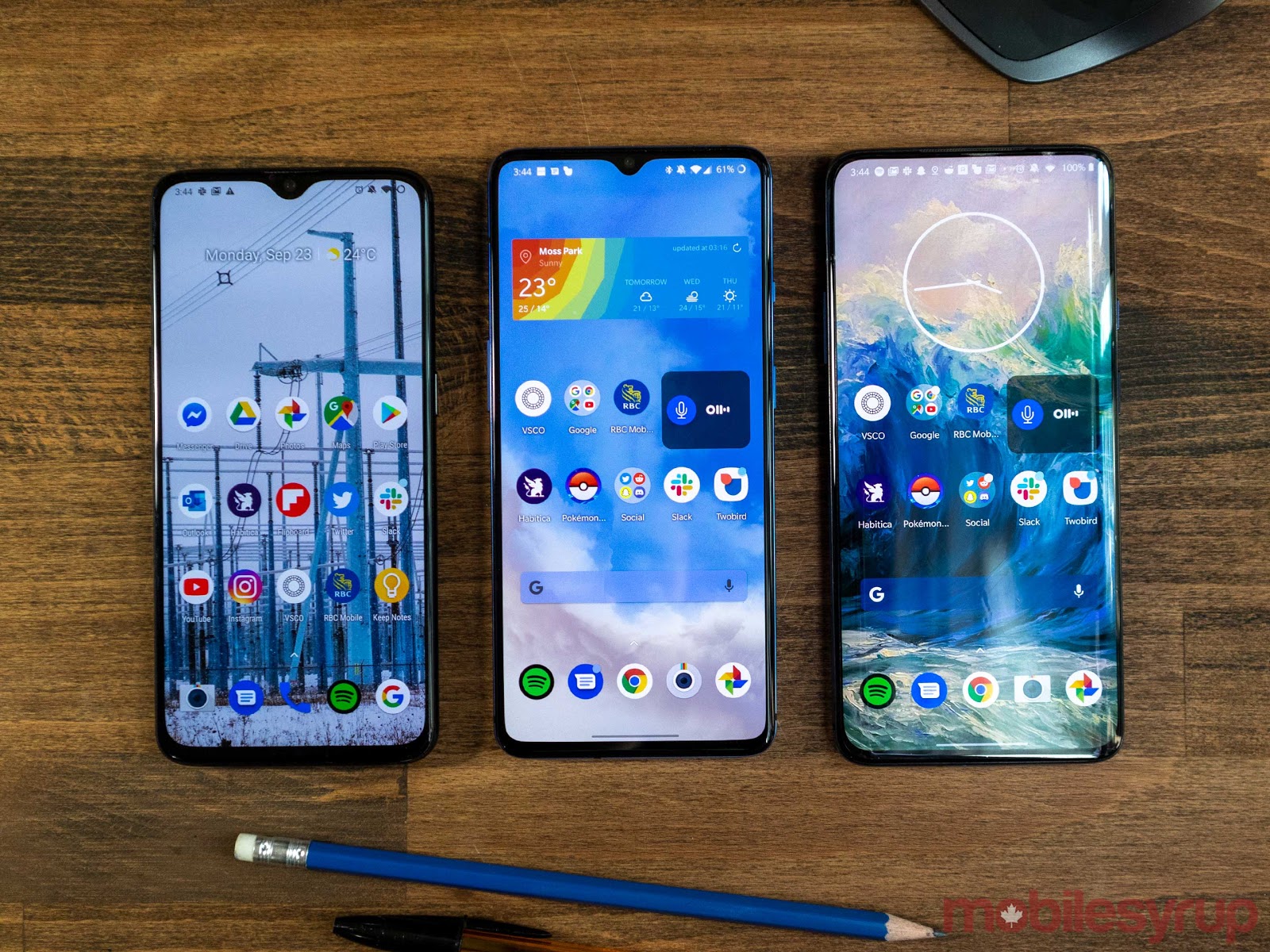 Speaking of Android 10, the OnePlus 7T is running the latest version of Android out of the box. This means that you get a cohesive system-wide dark mode plus new privacy enhancements and more straightforward notification controls.

Other smaller upgrades include a new ‘Customization’ setting for changing the look of the phone. Some of the default apps like ‘Gallery’ and ‘Phone’ have changed slightly, and the company added challenges to the Zen Mode feature.

There’s also a new fast-charging standard with the phone called Warp Charge 30T, which tops up the 7T’s 3,800mAh battery in under an hour. It even takes the phone 30 minutes to hit 70 percent with the default charger. In terms of battery life I felt like the OnePlus 7T lasted for about five hours of screen on time with the 9oHz dispaly wich would get me through a full day. It’s worth noting, that turning the ‘Battery saver’ mode on and switching the 90Hz screen down to 60Hz is will last a bit longer.

OnePlus included an in-screen fingerprint reader so users can either use their fingerprint, a face scan or a password to unlock the handset.

Great pictures for everyone 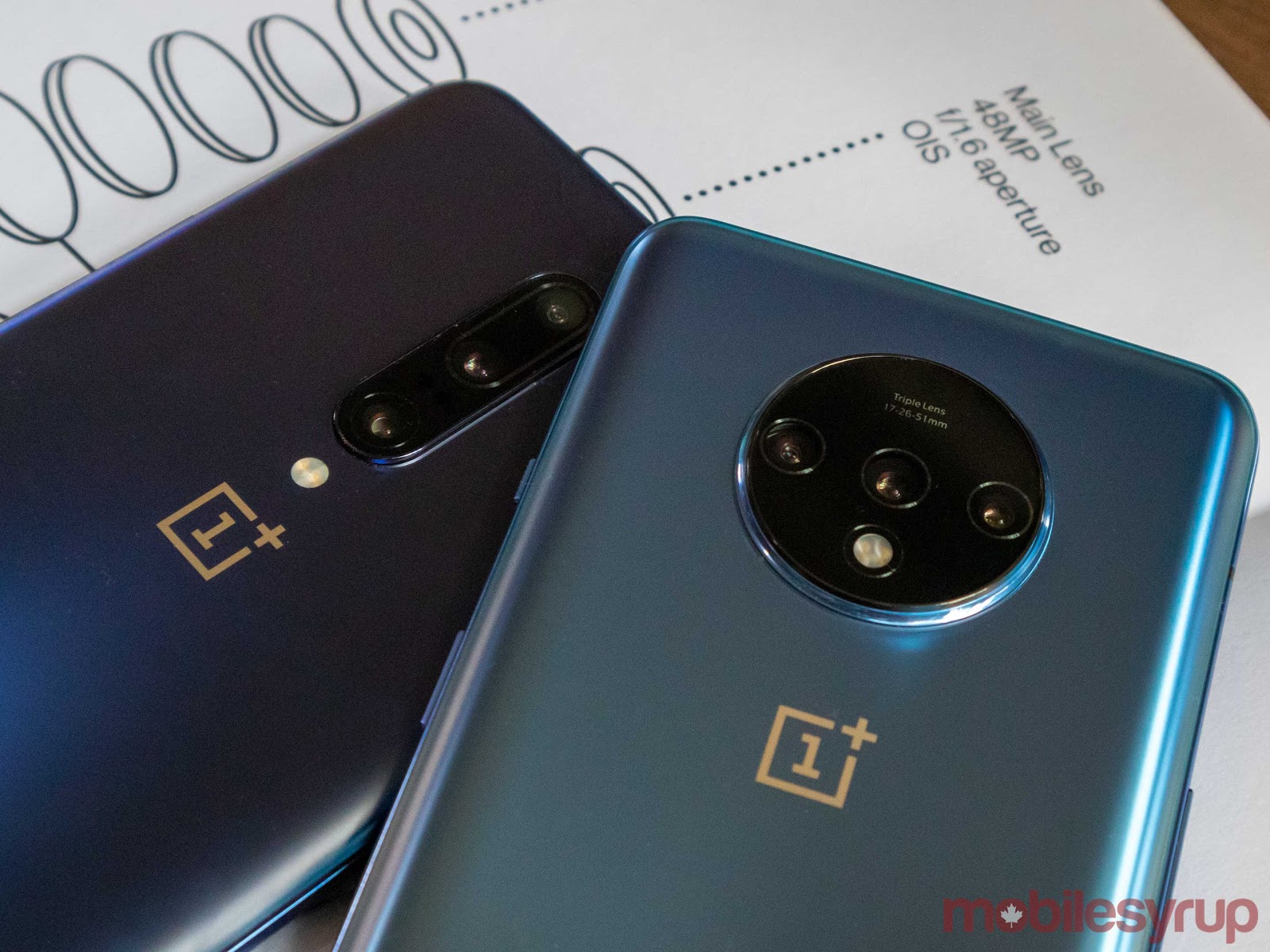 In the past, OnePlus’ cameras have faltered when compared to other devices, but that’s not the case here since the 7T takes wonderful shots.

Photos are perfectly sharp, capture a wide range of colours and offer natural shadows, which results in pleasing images. However, I would recommend turning on HDR by default since it helps the camera considerably. While it doesn’t remove shadows, it does help bring more natural-looking lighting into challenging shots.

I’m a big fan of the default 48-megapixel sensor with its f/1.6 aperture. I think photos turned out sharp, which meant that I could even crop them. There’s also a new ‘Macro’ mode for shooting close up pictures from 2.5cm away.

The phone’s 2x telephoto lens is a 12-megapixel shooter with an f/2.2 aperture. It also took acceptable, if not great photos, but you can’t crop them as much. The 10x digital zoom also proved useful in a pinch, and if I could hold the phone steady enough these shots were only a little grainy.

The final camera is a 16-megapixel wide-angle shooter with an f/2.2 aperture. It isn’t as wide as Samsung’s S10, but it’s nice to have on the phone for shooting landscapes and other tricky subjects. You can also use this lens to shoot ‘Portrait’ shots of more than one person.

You can use both the wide-angle lens and the regular camera to shoot Nightscape pictures, which impressed me more than I expected and was able to take usable photos in almost complete darkness.

The OnePlus 7T has a 16-megapixel selfie camera as well and it can be tack sharp. There are times when I’d take a selfie and the camera would blow me away with how good it was, and then in other instances, it lost detail in my hair or face.

Overall, as a picture-taking machine, the OnePlus 7T doesn’t have a lot of shortcomings. It’s decent and I felt like I was able to take a picture of anything since the phone offers a trio of versatile lenses. I’ve even become a fan of how the company’s ‘Ultrashot Engine’ processed pictures.

The primary camera even has an optical image stabilizer which should not only allow for crisper shots but also smoother video. Combining this with some software tricks, the 7T provides a steady video shooting experience. This is only when you’re shooting in 1080p. If you step up to shooting at 60fps at 4K resolution then the ‘Super Stable’ software doesn’t work.

Videos are still reasonably stable without Super Stable enabled, but the feature adds a more cinematic quality to your videos. 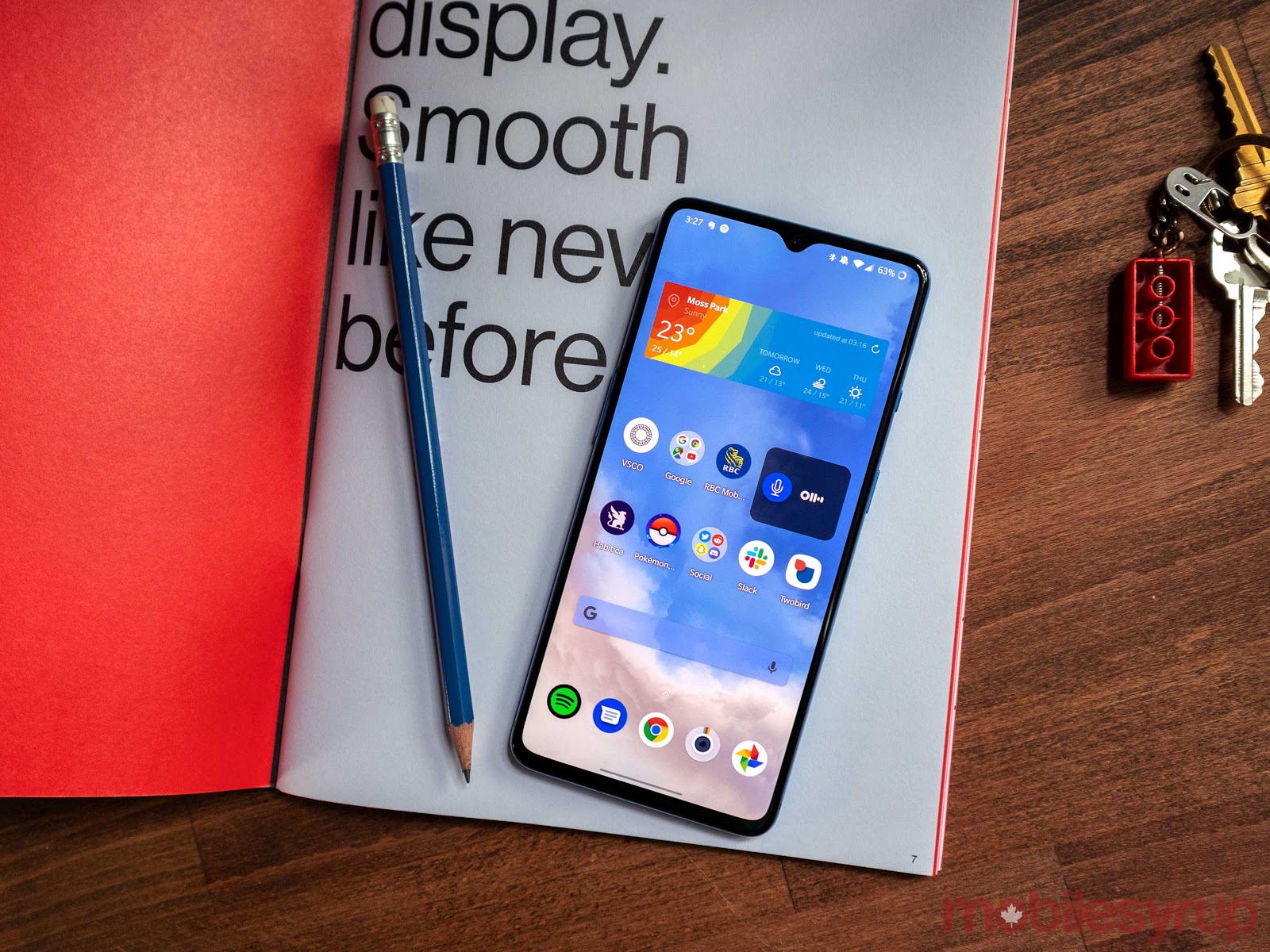 Overall the OnePlus 7T is a fantastic phone that offers a decent amount of value in a market filled with $1,000+ flagships.

That said, it's not perfect, and I could see some people being turned off by its design.

If you like the look, it's a serviceable smartphone that's likely going to surprise you with how good it is more often than it's going to let you down.

For example, two things I really liked were the camera and the updated haptics. The camera can take awesome pictures and I really like the higher contrast it produces compared to some other smartphone shooters. The haptics help elevate this phone from a basic Android device to a premier phone. It seems like a small addition, but since you tap on the phone likely thousands of time a day the subtle vibrations add a lot to the experience.

While I don't know if a 90Hz refresh rate is something most people would notice, it’s still a nice addition for users who like to play mobile games. I would rather a slightly higher display resolution, or a cheaper price instead of the high refresh rate since I don't find it useful. I’m also not a huge fan of OnePlus’ Ambient Display implementation since it’s not always-on and it looks tacky with its red accents.

Taking everything I've said into account, it's hard to go wrong with the OnePlus 7T. It might not have the reputation of a Samsung or Pixel device, but after my time with the phone, I've come to the conclusion that there's nothing significantly wrong with it.

The OnePlus 7T is set to cost $799 CAD and is available on OnePlus’ website starting October 18th.

“it's a perfectly serviceable smartphone that's likely going to surprise you with how good it is more often than it's going to let you down.“