There's a lot to like about the OnePlus 6T, even if it's not a huge update

If there was ever a year for OnePlus to skip a T-style update and focus its efforts on its next major release, this was the year.

In the weeks and months since I wrote MobileSyrup‘s review of the OnePlus 6, I’ve come to regard the OP6 as one of my favourite phones from the past year. Despite its flaws, the OnePlus 6 felt like a significant step forward for the Chinese device manufacturer. Even after a flurry of fall releases, the phone still holds its own against the competition.

None of that is to say the company’s new phone, the OnePlus 6T, is a bad device.

Far from it. There’s a lot to like about the 6T.

And what’s new here, in my mind, isn’t that noteworthy.

As a feature, the 6T’s new in-display fingerprint is expertly executed but feels more like something OnePlus added to help T-Mobile market the device to U.S. consumers than a substantive upgrade that improves the experience of using the phone. Worse yet, the in-display fingerprint sensor comes at the cost of a headphone jack.

Say what you will about market uptake on Bluetooth headphones and the overall direction of the smartphone industry, to remove an analog audio connection to make room for what is, at most, a lateral upgrade feels like a misstep to me.

None of that diminishes what was so great about the OnePlus 6 and continues to be great about the 6T, but I can’t help but feel that the 6T represents a missed opportunity. 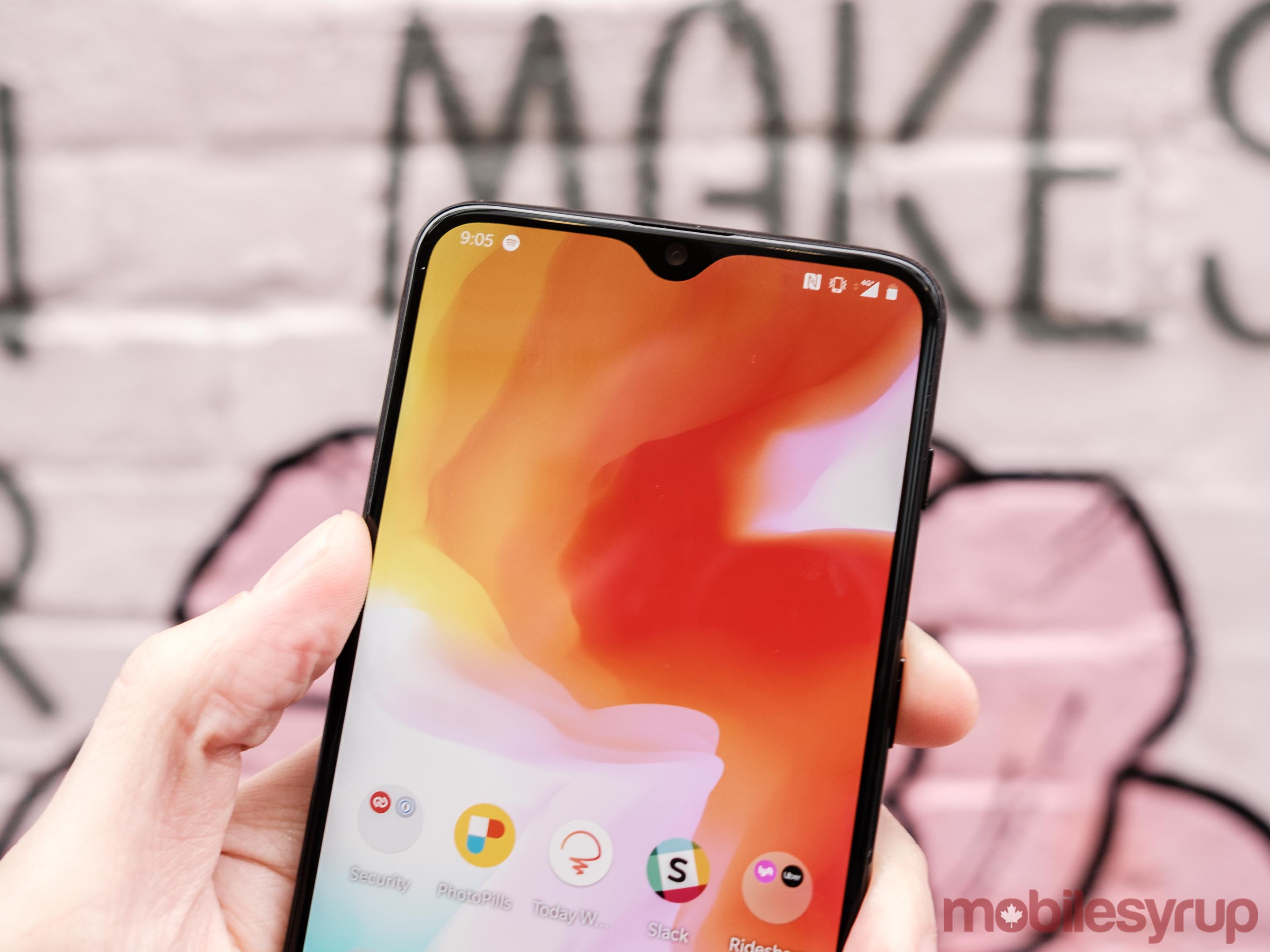 Sitting next to the OnePlus 6, what’s most noticeable about the 6T is its new waterdrop-shaped notch.

The OnePlus 6 had one of the less intrusive notches on a phone released this past year, and with the 6T OnePlus has found a cutout design that’s an even better compromise between form and function. Despite its recessed top speaker, the 6T sounds just as good as the OnePlus 6. When I asked my colleague Patrick O’Rourke to call me on both the OP6 and OP6T, call quality and volume were identical, with his voice coming out loud and clear across both handsets.

Beyond the new notch, the 6T’s display is bigger than the one found on the OnePlus 6. It measures in at 6.41-inches, instead of 6.2-inches. OnePlus has also managed to reduce the bottom chin bezel on the OP6T, shaving it down by 1mm. As a result of the larger display, the 6T features a taller 19.5:9 aspect ratio.

One issue I noticed with the display on my review unit was colour calibration. Even when set to the same colour space, there’s a visible difference between how the OnePlus 6 and OnePlus 6T render colour. Compared to the OnePlus 6, colours on the 6T’s screen look colder and overly saturated. 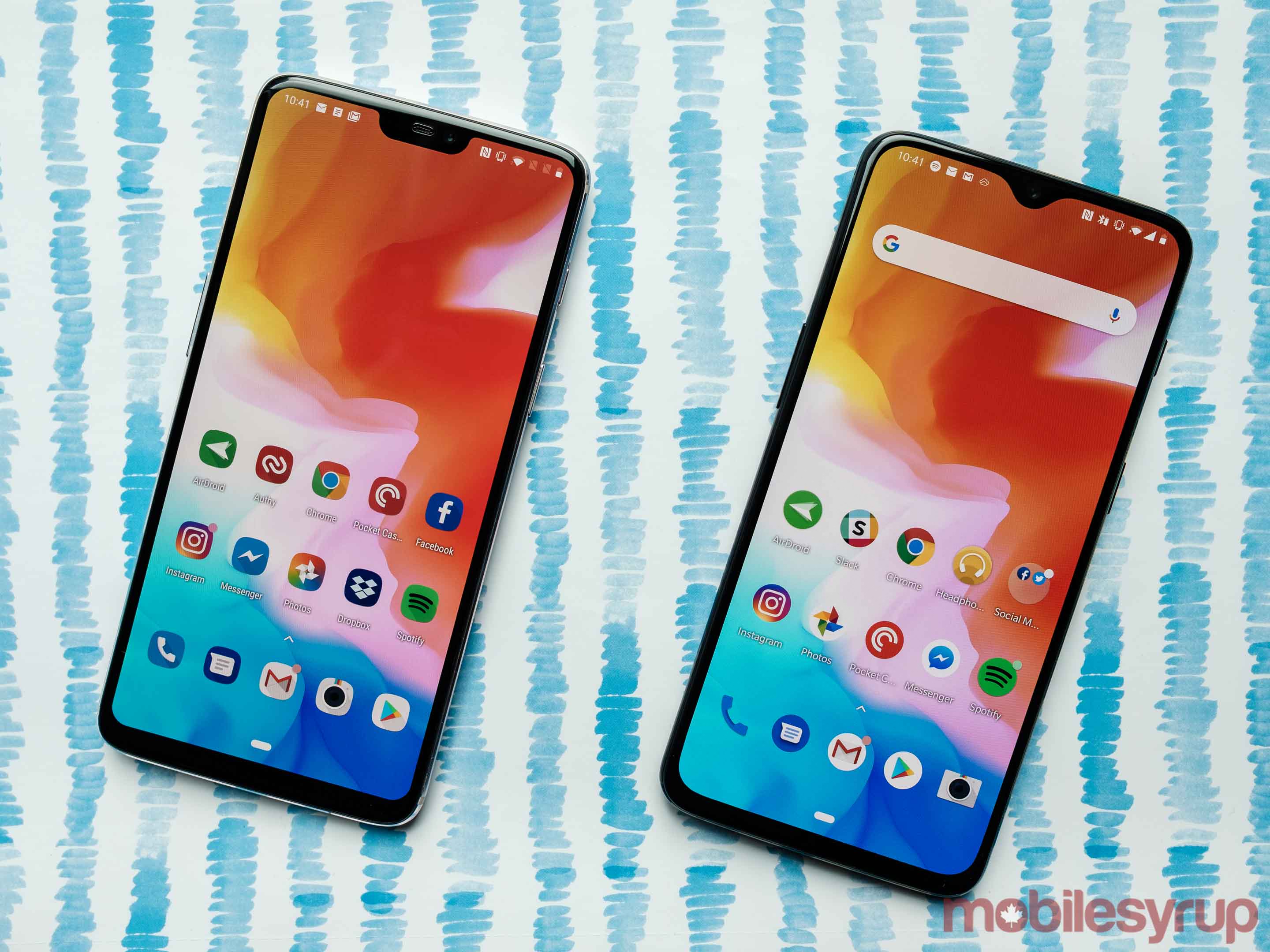 According to a OnePlus spokesperson, the company changed how it calibrates the screen on the 6T to improve brightness levels, chromatic accuracy and colour range. Coming from any other phone, including the OnePlus 6, the display on the 6T didn’t look right to my eye. As best as I can tell, this may be an issue with my specific unit. Comparing an image Android Authority’s David Imel sent me of his OnePlus 6 and OnePlus 6T side-by-side, the two phones displayed similar colour saturation and temperature.

Colour calibration aside, if you’ve used a OnePlus phone anytime in the past couple of years, you know what to expect from the 6T’s screen. As with the OnePlus 6, its a 1080p panel with DCI-P3 wide-colour support. It gets decently bright, but not enough to support HDR10. With just how big the screen on the 6T has become, its 1080p display is starting to feel more like a liability than a strength. By no means do text and icons look blurry, but the 6T isn’t making the best use of its big screen.

OnePlus’ first attempt at an in-display fingerprint sensor is a success, mostly 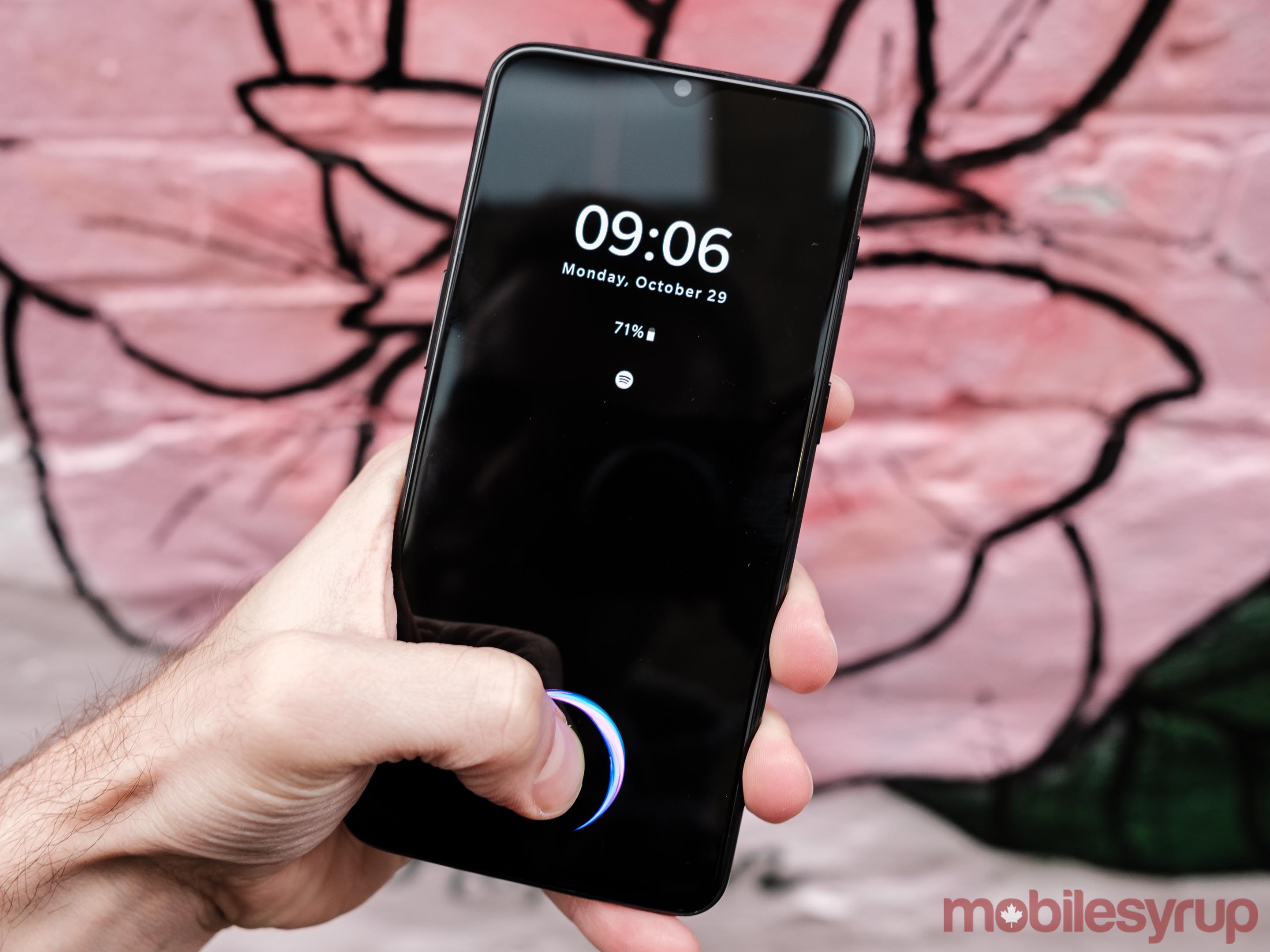 The 6T’s marquee new feature, however, is its in-display fingerprint sensor.

I wasn’t able to test the OnePlus 6T’s in-display sensor against the one featured in the Mate 20 Pro — MobileSyrup’s review unit hasn’t arrived yet, so this is a comparison I’ll evaluate later. In the meantime, I’ll say — based on what I’ve read in the past about in-display sensors in other, older smartphones — I was expecting to not like the 6T’s fingerprint scanner. Instead, I left my first experience with it pleasantly surprised.

When the sensor works without a hitch, the effect is, undeniably, cool. Moreover, the fact that it’s now once again on the front of the device is a major plus for those that prefer that placement.

Functionally, however, the 6T’s in-display fingerprint sensor is not an improvement over traditional scanners. At least not yet. 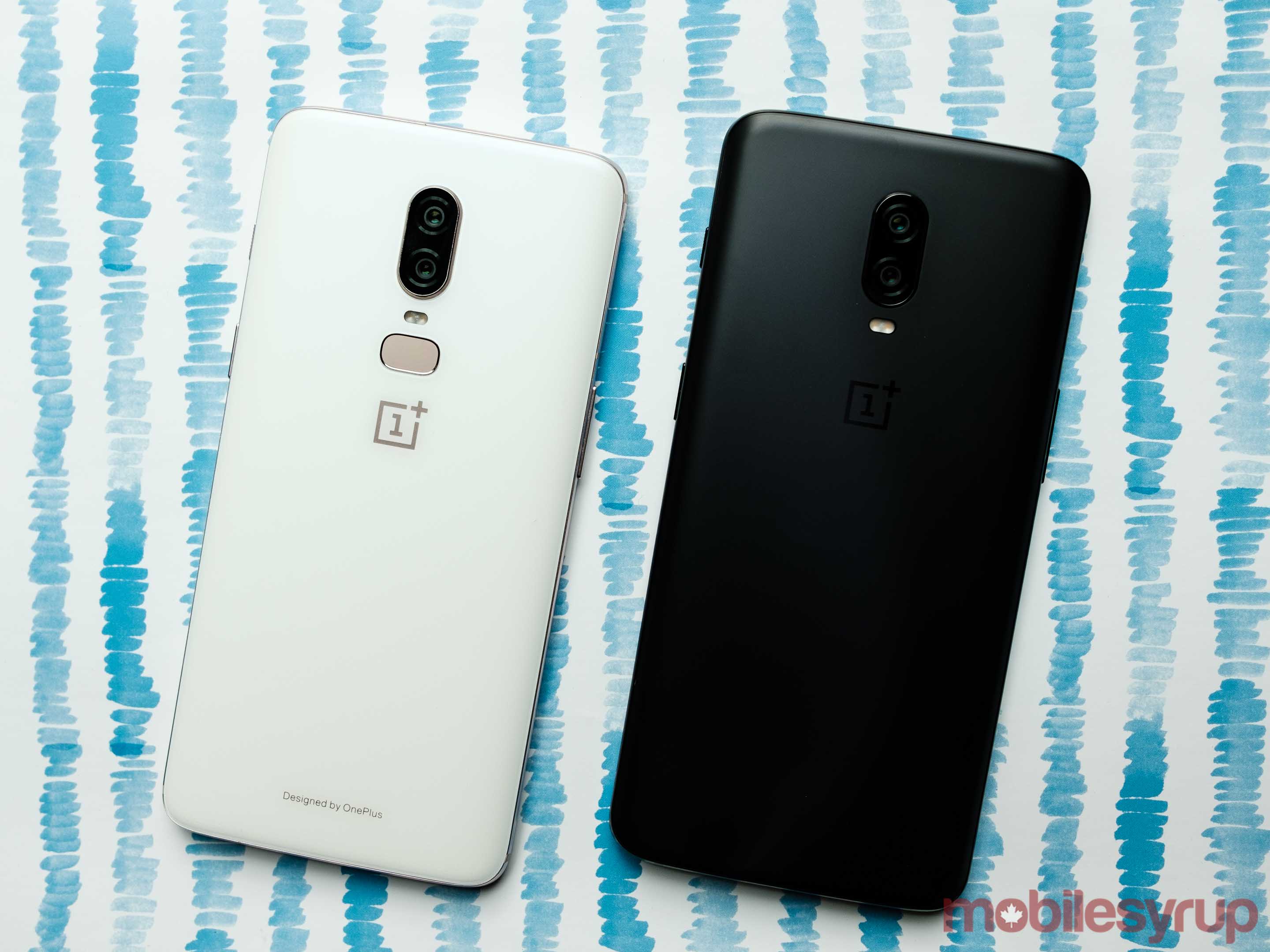 In use, I found there was a perceptible difference between using the OnePlus 6T’s in-display fingerprint scanner and the OnePlus 6’s physical sensor.

To start, setup takes longer than it would with a traditional fingerprint scanner due to the fact the sensor can have issues accurately imaging the edges of a fingertip. Moreover, even in regular use, the sensor is slower to unlock the phone than the OP6’s traditional fingerprint scanner. Add to this that the in-display sensor is not a physical and tactile element of the 6T’s design that you can find by touch, and the experience of using the in-display sensor to unlock the 6T is slower across the board.

Another issue with OnePlus’ current of implementation of its in-display fingerprint technology is that OxygenOS doesn’t provide much in the way of feedback when the sensor can’t get a good read of your fingerprint. Say you place your finger or thumb slightly to the side of the designated scanning area, OxygenOS won’t prompt you to move it closer. In most cases, the solution is to reposition your finger to ensure it lays as flat as possible on the scanning surface. And yet even after repositioning your finger in what appears to be the best possible position, the 6T will still, in some circumstances, fail to authenticate your identity correctly.

To be clear, in the vast majority of cases the 6T’s in-display fingerprint sensor works and makes a compelling argument for the technology going forward. A revolutionary feature it is not, however.

Moreover, to accommodate the in-display scanner, OnePlus had to make several internal and external changes to the 6T’s design. 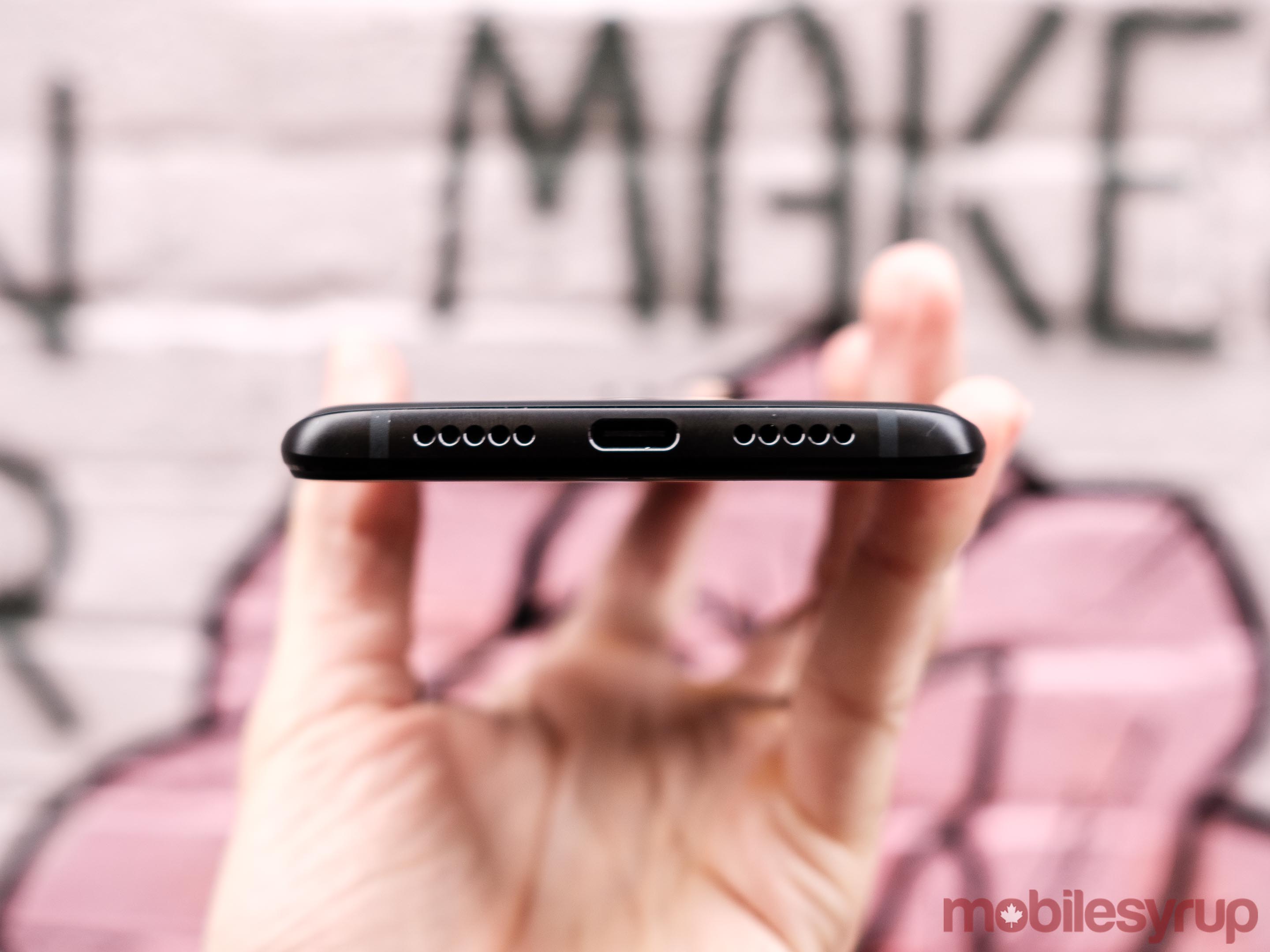 Physically, the phone is 0.4mm thicker than its predecessor. It’s also rounder. Together I found these changes made the 6T less comfortable to hold than the 6. 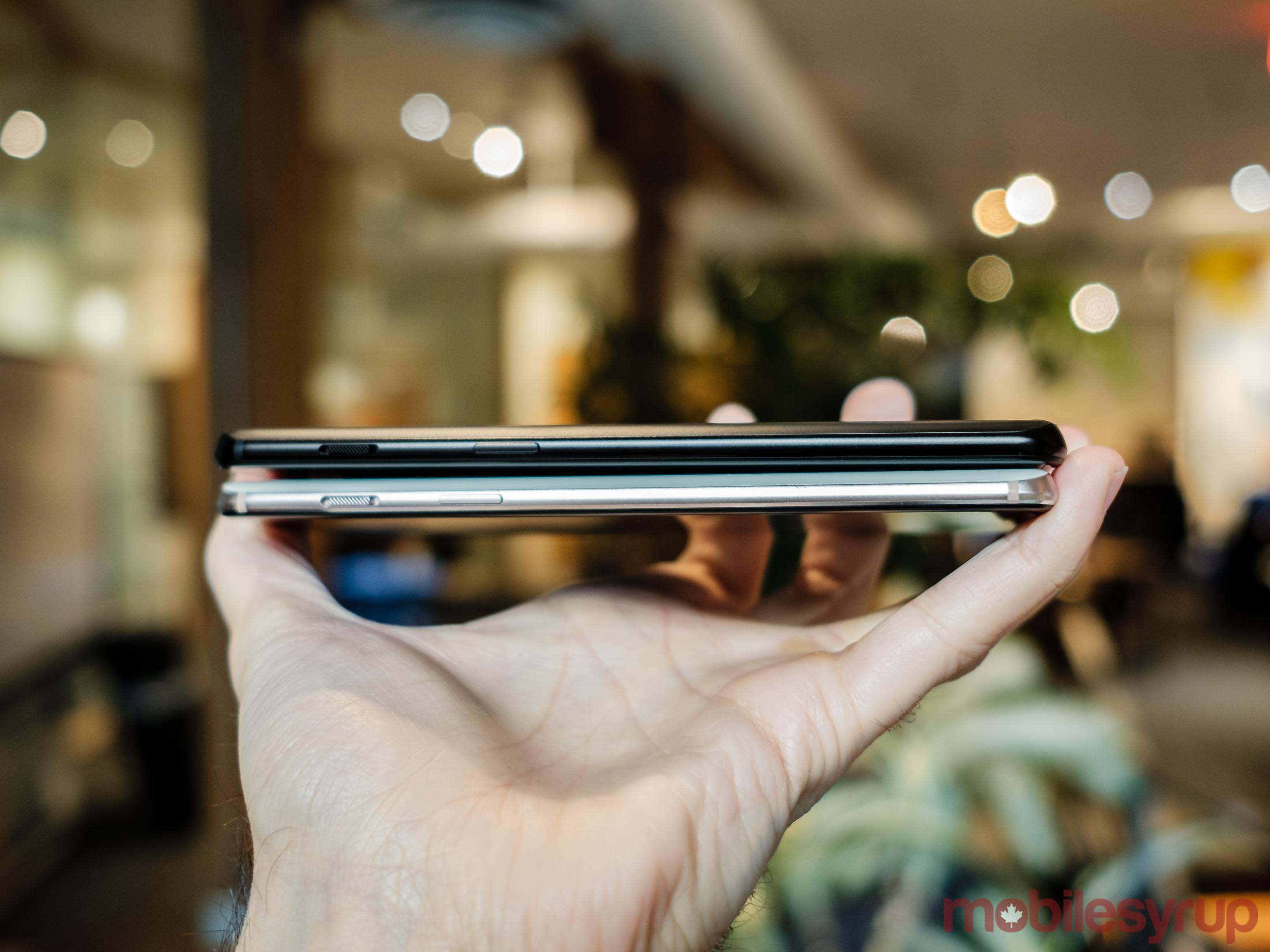 Another change is that the phone now appears to feature what look like stereo speakers. However, the righthand set of speaker holes are mostly for show; there’s not a second speaker unit.

Last but not least, OnePlus, as I already mentioned, removed the 6T’s headphone jack to make room for its in-display fingerprint sensor. To make up for the fact, the 6T features a 20 percent larger capacity battery. The OnePlus 6 already had great all-day battery life, and the 6T improves on that. I was consistently able to get seven to eight hours of screen time while using the phone throughout the day.

Inductive charging is once again missing, but as with its predecessor, OnePlus’ fast-charging technology makes up for its absence with its excellent performance and implementation. 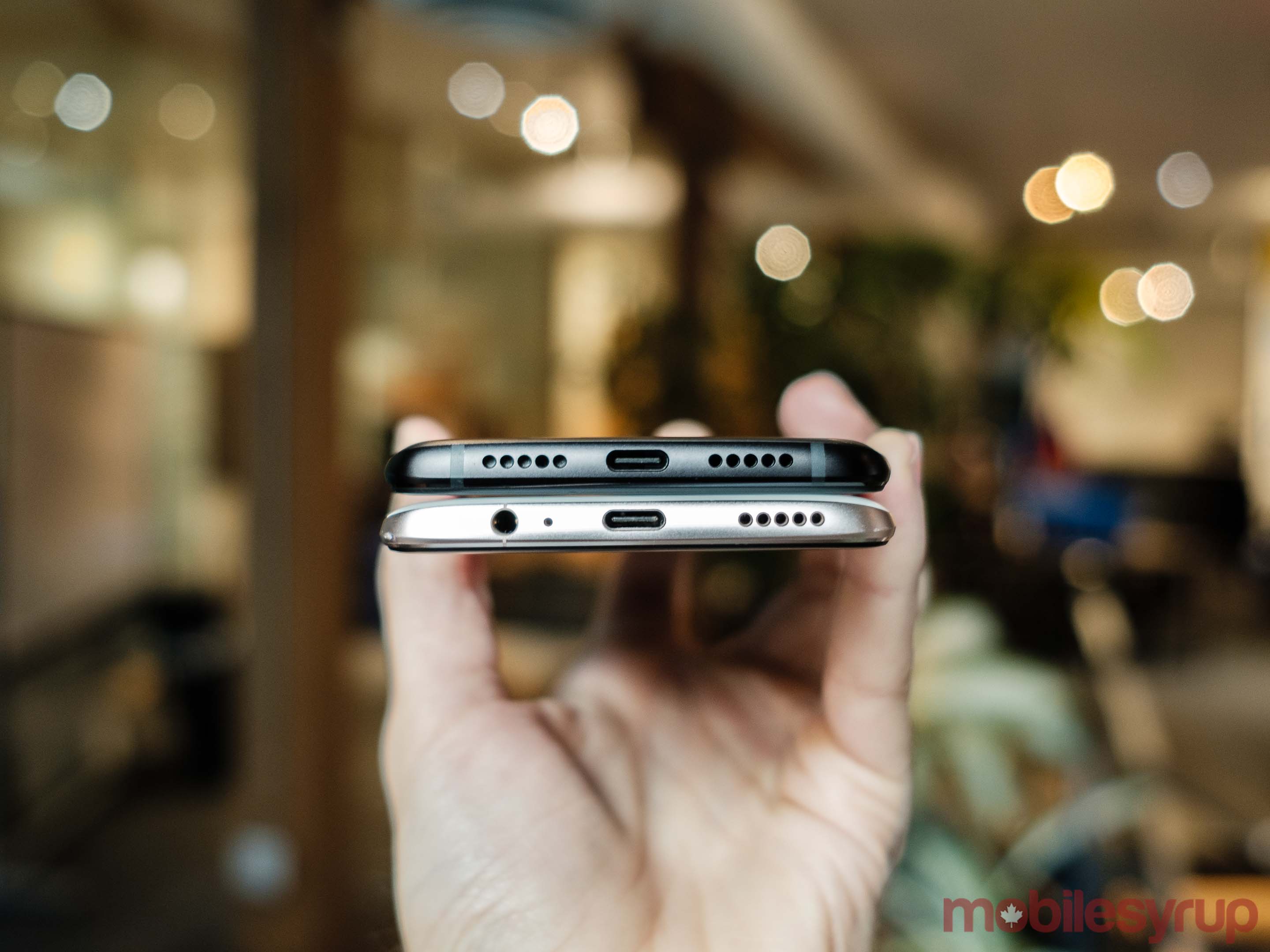 Additionally, OnePlus is releasing a new pair of USB-C headphones alongside the 6T. The company sent a pair to MobileSyrup with the 6T. Like the Bullets V2 before them, the Bullets USB-C sound great — especially for their modest price — and feature thoughtful design additions like a flat, tangle-proof cable. OnePlus also offers a pair of excellent Bluetooth headphones in the Bullets Wireless.

Whatever issues I have with the 6T’s hardware, I don’t have anything negative to say about its software.

The phone ships with Android 9 Pie out-of-the-box. What’s more, since the launch of the OnePlus 6, OnePlus has committed to supporting all of its new smartphones with two years of platform updates and three years of security updates. Next to the Pixel 3 and Pixel 3 XL, which are slated to receive three years of platform updates, the OnePlus 6T is the best deal in Android in that regard.

Moreover, as far as Android forks go, OxygenOS continues to be among my favourite. With returning features like ‘Reading mode’ — which gives you the option to turn the screen greyscale when reading, making the phone function like an e-reader — and the overall speed and fluidity with which OxygenOS handles every task, the 6T is a pleasure to use.

The one major feature OnePlus has added to OxygenOS is called ‘Speed Boost.’ According to the company, Speed Boost improves the speed at which the 6T cold launches apps by as much as 20 percent. Without the OnePlus 6 next to the 6T, it’s hard to register the difference in app launch speed. At most, the difference is half-a-second, but there is a difference. 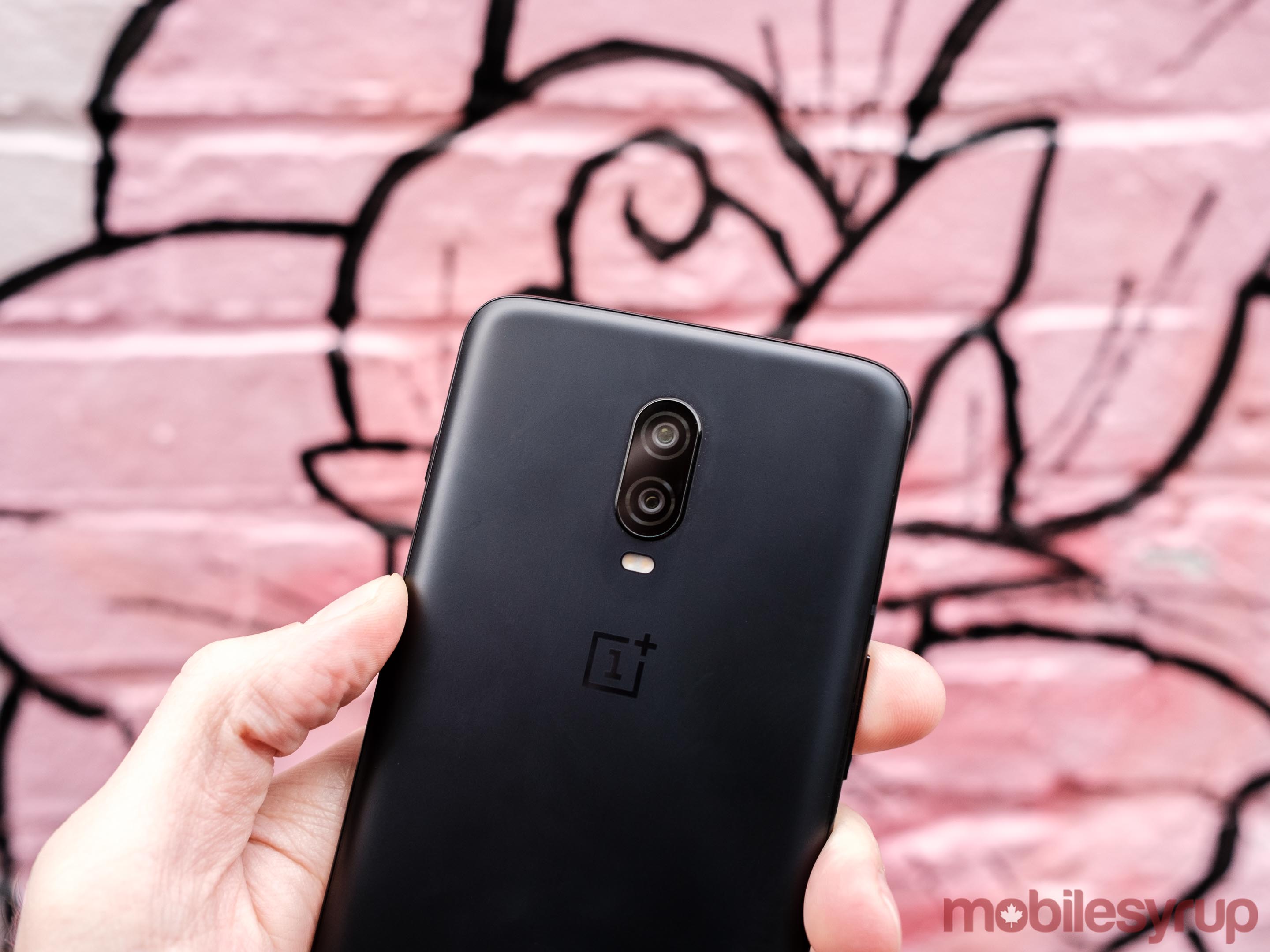 New to the 6T are a variety of software enhancements and features that help shore up some of the feature gaps the OP6’s camera had compared to phones like the P20 Pro. I’ll note here that all the camera features I’m about to detail will make their way to the OnePlus 6 via a software update later this year. 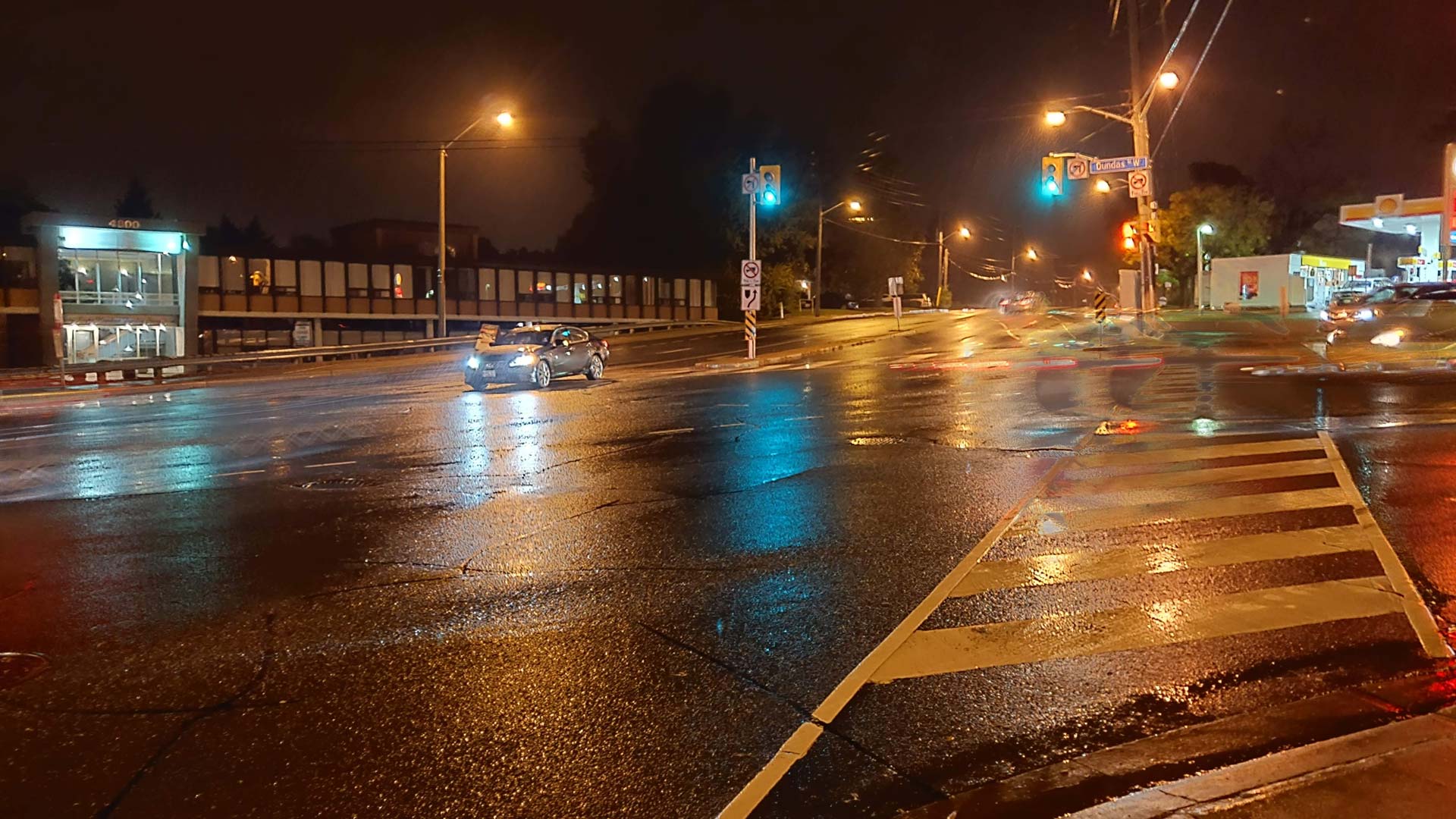 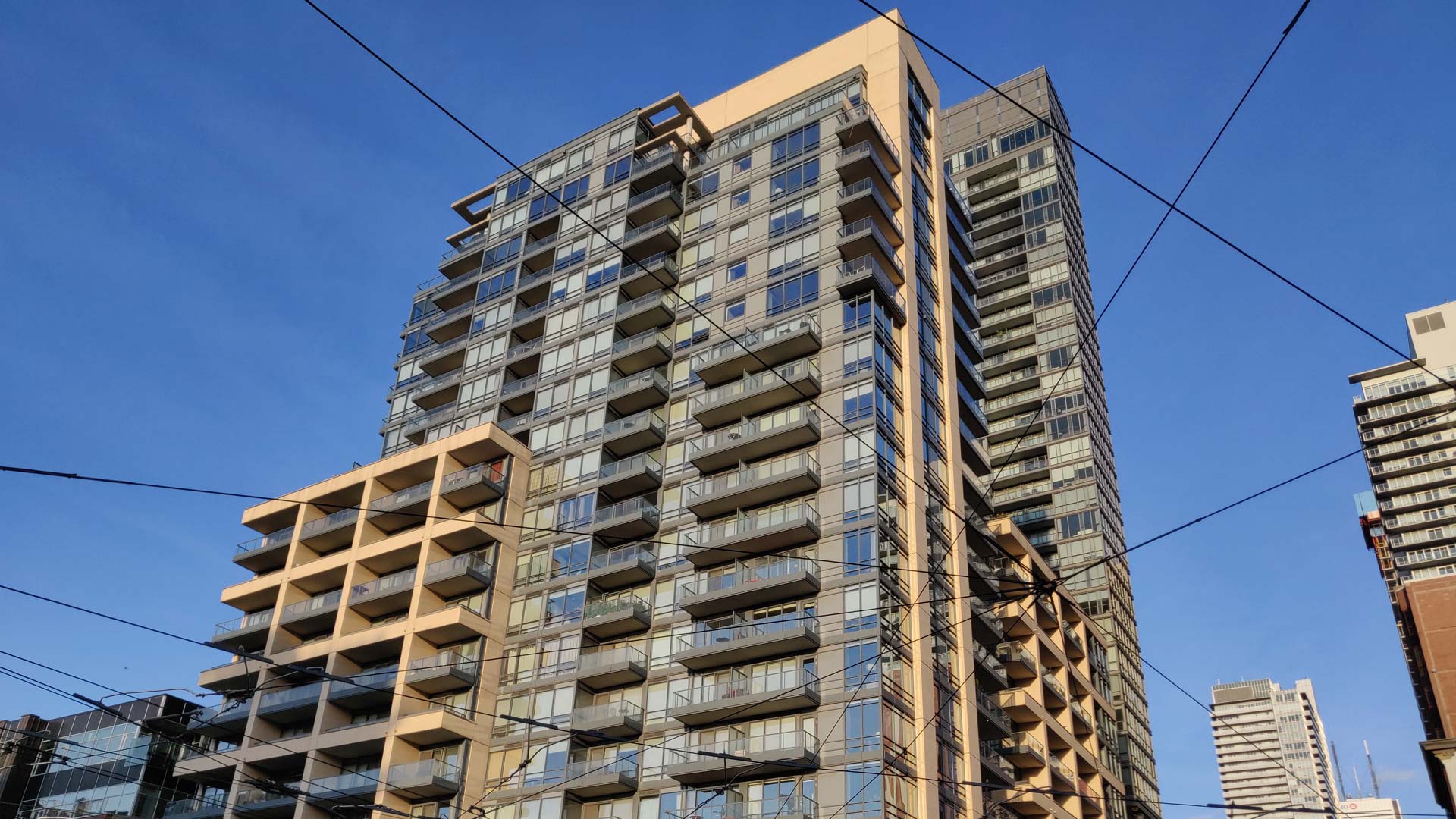 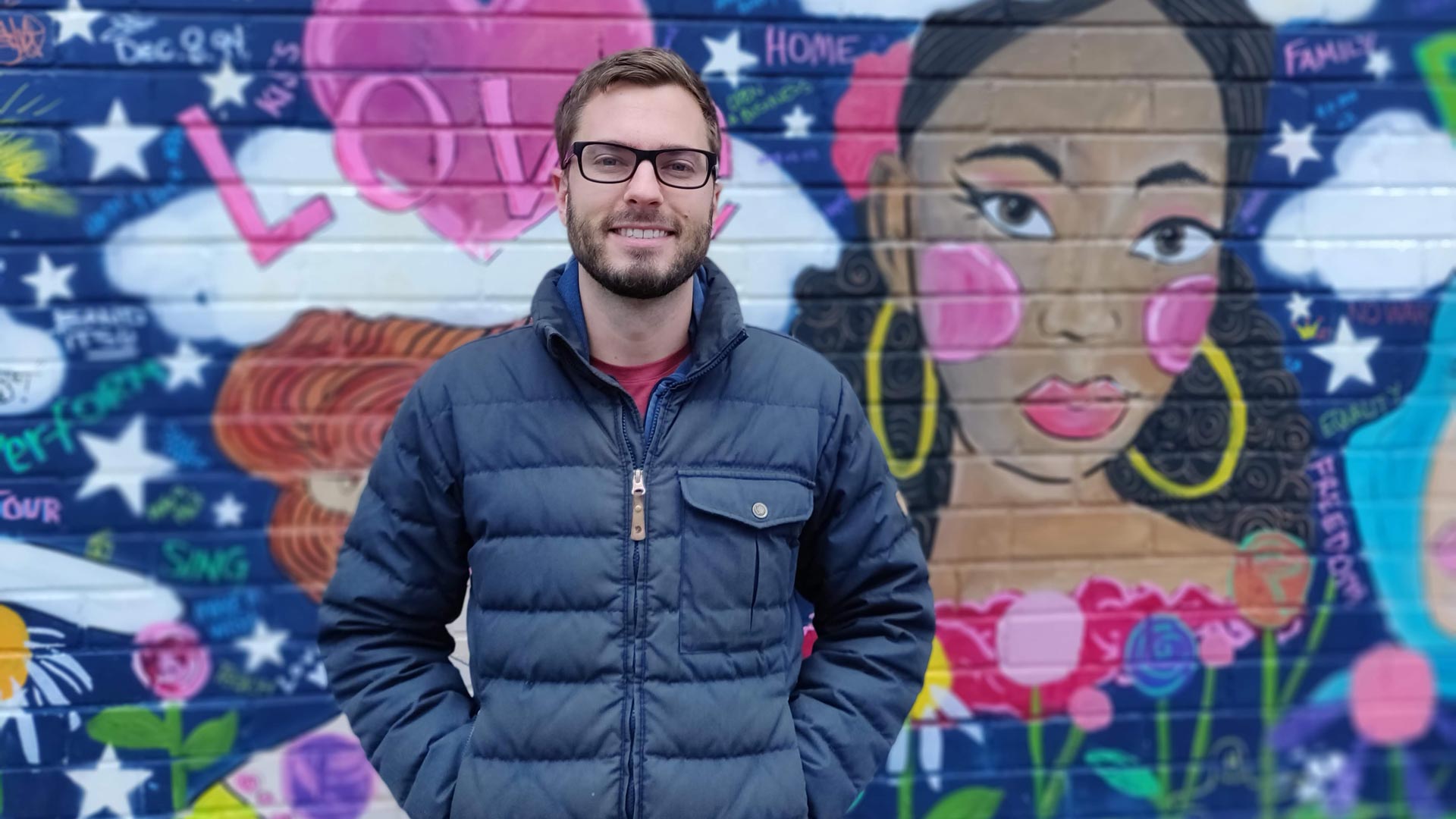 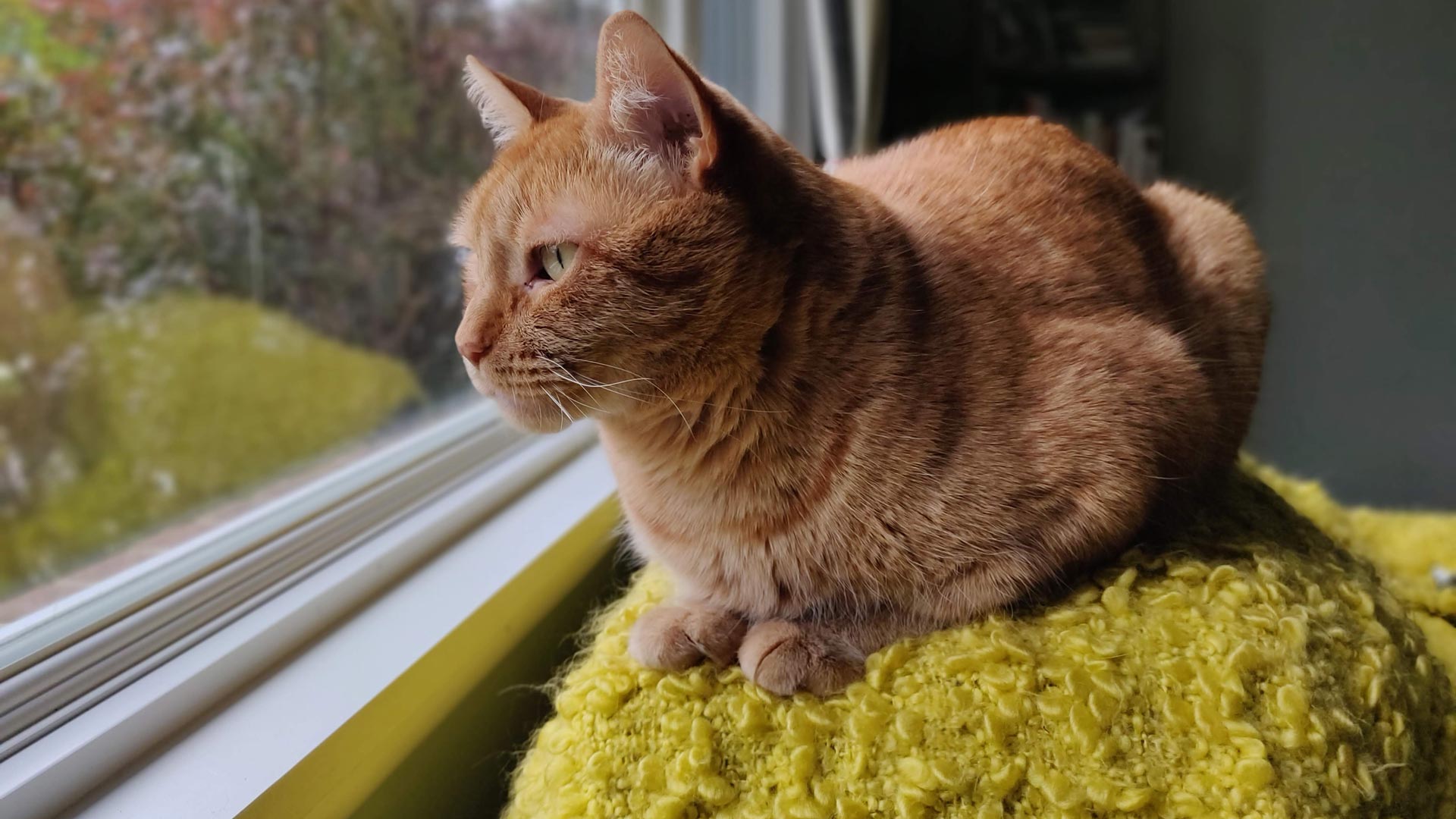 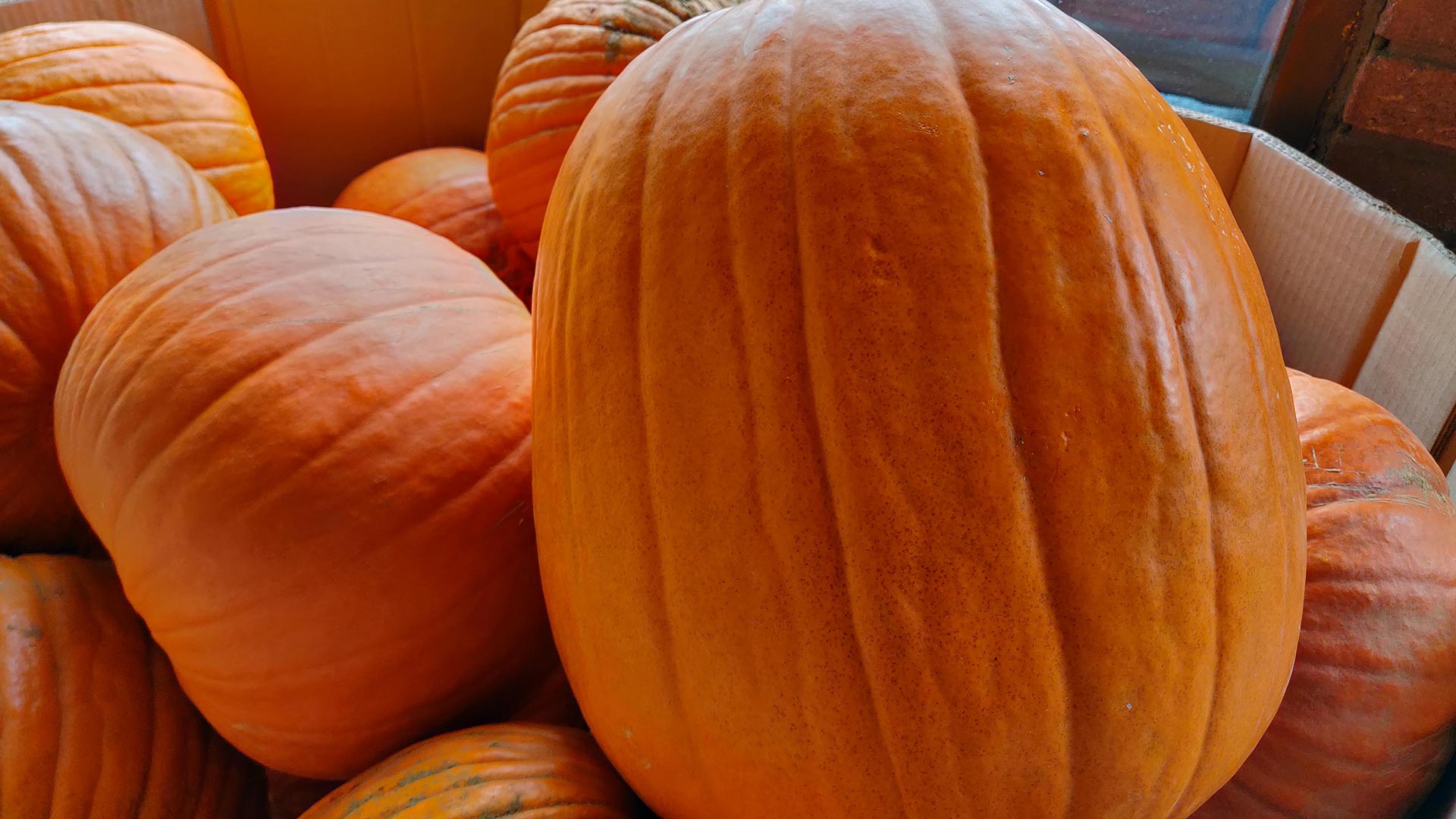 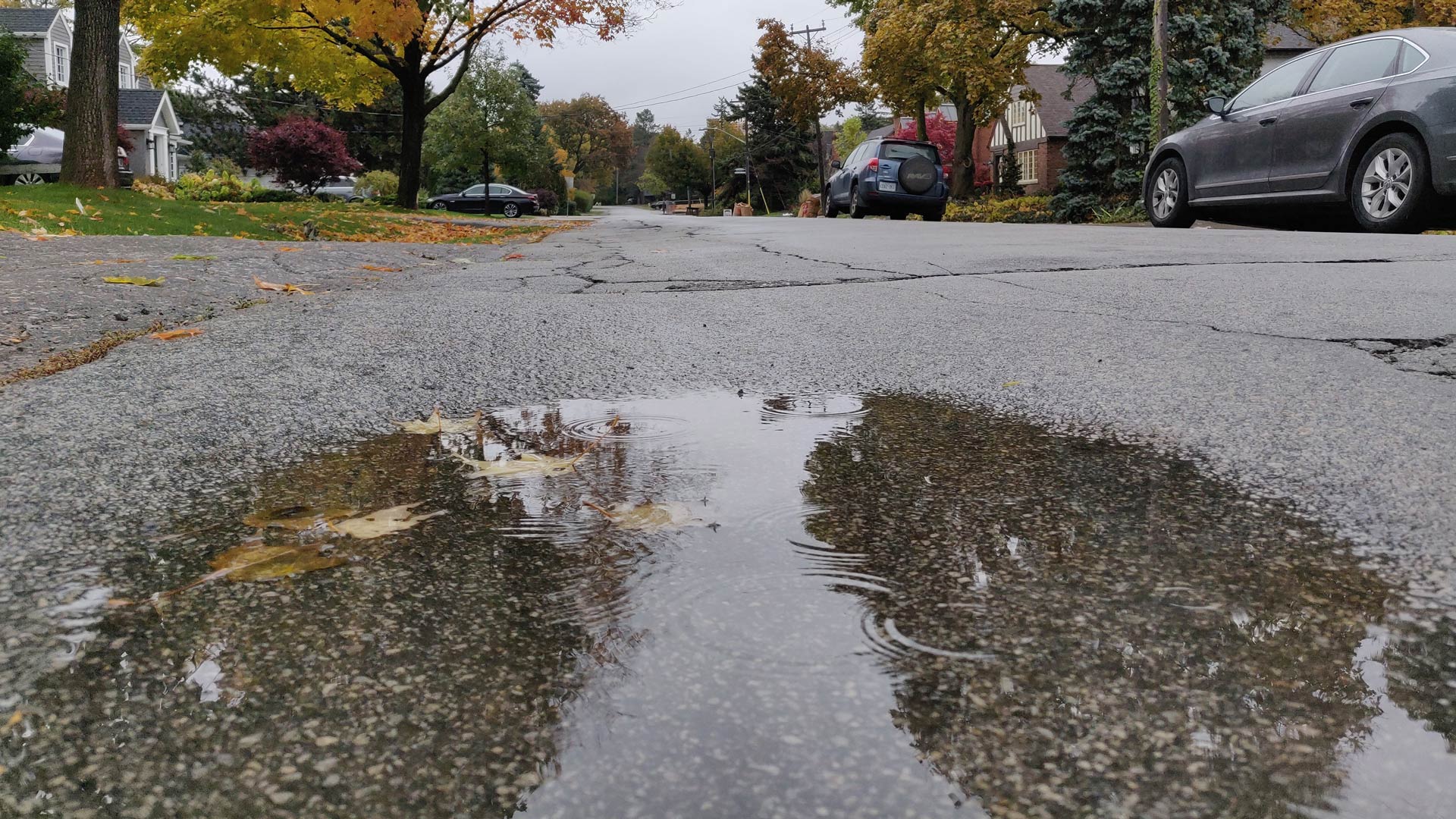 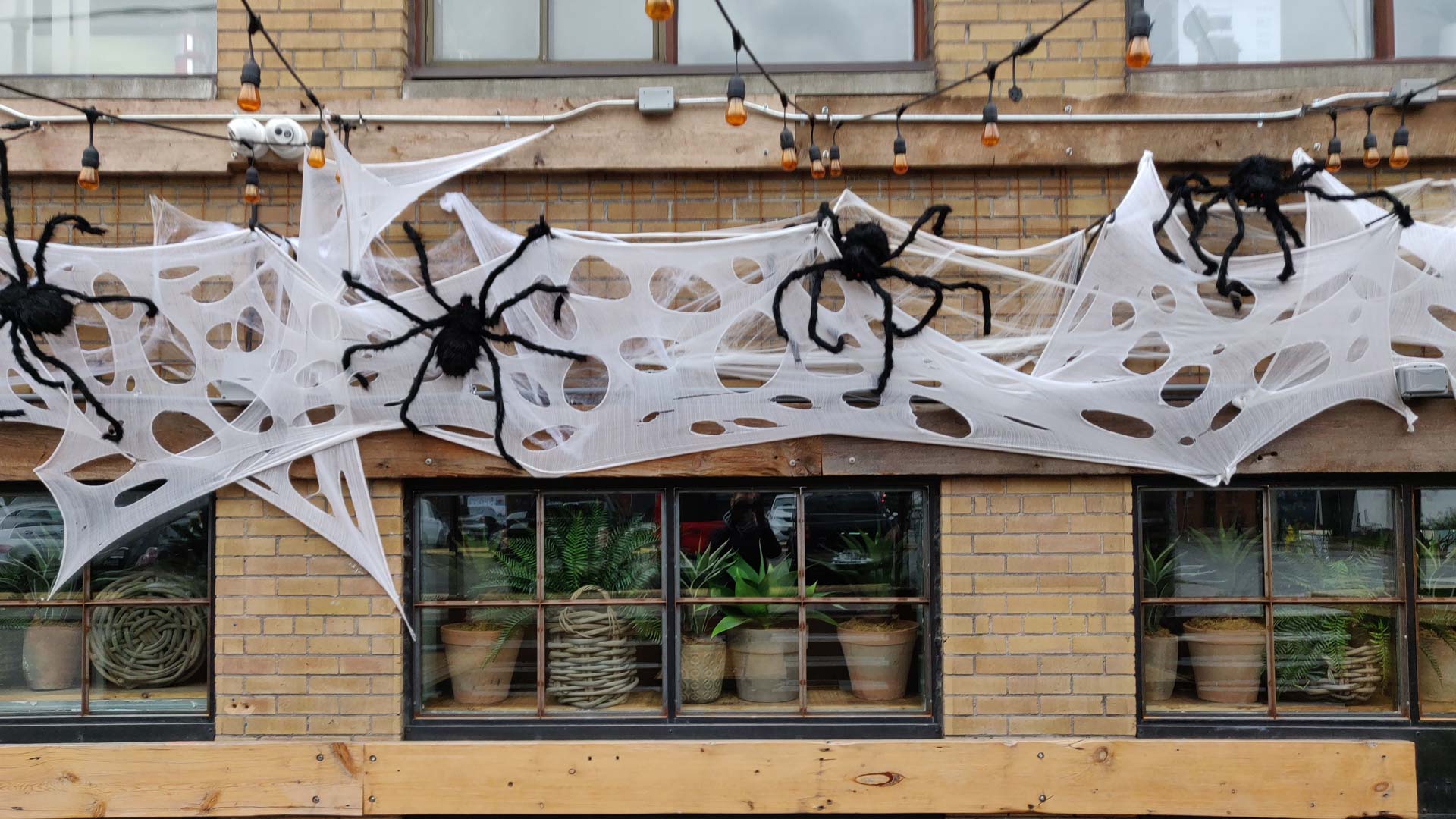 Leading the list of the 6T’s new camera software is a feature called ‘Nightscape.’ Using a combination of long exposure photography and shot bracketing, Nightscape promises better night time photos. At times, the difference between photos captured using Nightscape and a single press of the shutter can appear minimal, but the mode does a good job of recovering shadow detail, reducing the appearance of unsightly digital noise and better preserving colours. 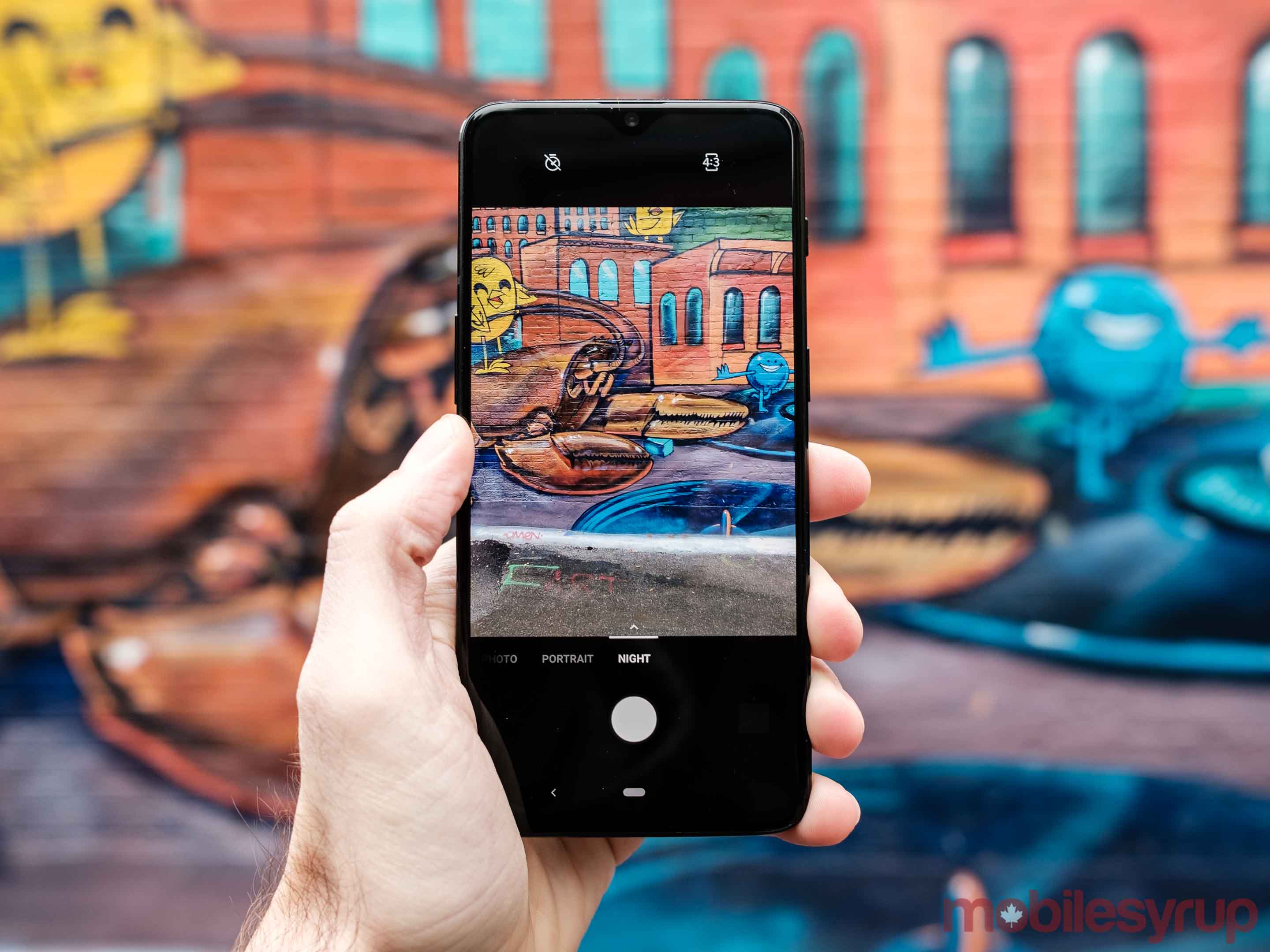 I imagine the feature, at least in its current iteration, won’t blow most people away, but its addition is appreciated nonetheless. Moreover, with a bit of lucky timing, it’s possible to create interesting shots involving light trails from cars and other vehicles using Nightscape.

Behind the scenes, OnePlus says it has also introduced a new de-noising algorithm to help with capturing photos in low-lighting scenarios, and improved edge detection in portrait mode, as well as improved portait mode more generally. The phone is also reportedly better at properly identifying the subject of an image you’re about to take and adjusting settings accordingly.

In practice, none of these additions make the 6T’s camera significantly better than what was already on offer with the OnePlus 6, but they’re welcome additions all the same.

Still one of the best deals in mobile

If I put aside what I wanted from the OnePlus 6T and think about whether it makes sense for the average Canadian consumer to purchase this as their next phone, it's hard not to recommend the 6T.

I may miss the headphone jack, but between its excellent software, fast internals, incredible battery life and capable camera, there's a lot of value to be had with the 6T, especially now that the base model comes with 128GB of internal storage, instead of 64GB.

The OnePlus 6T goes on sale in Canada on November 1st. The base model, with 6GB of RAM and 128GB of internal storage, starts at $719 CAD.

"I may miss the headphone jack, but between its excellent software, fast internals, incredible battery life and capable camera, there's a lot of value to be had with the 6T."