Taking your house by storm 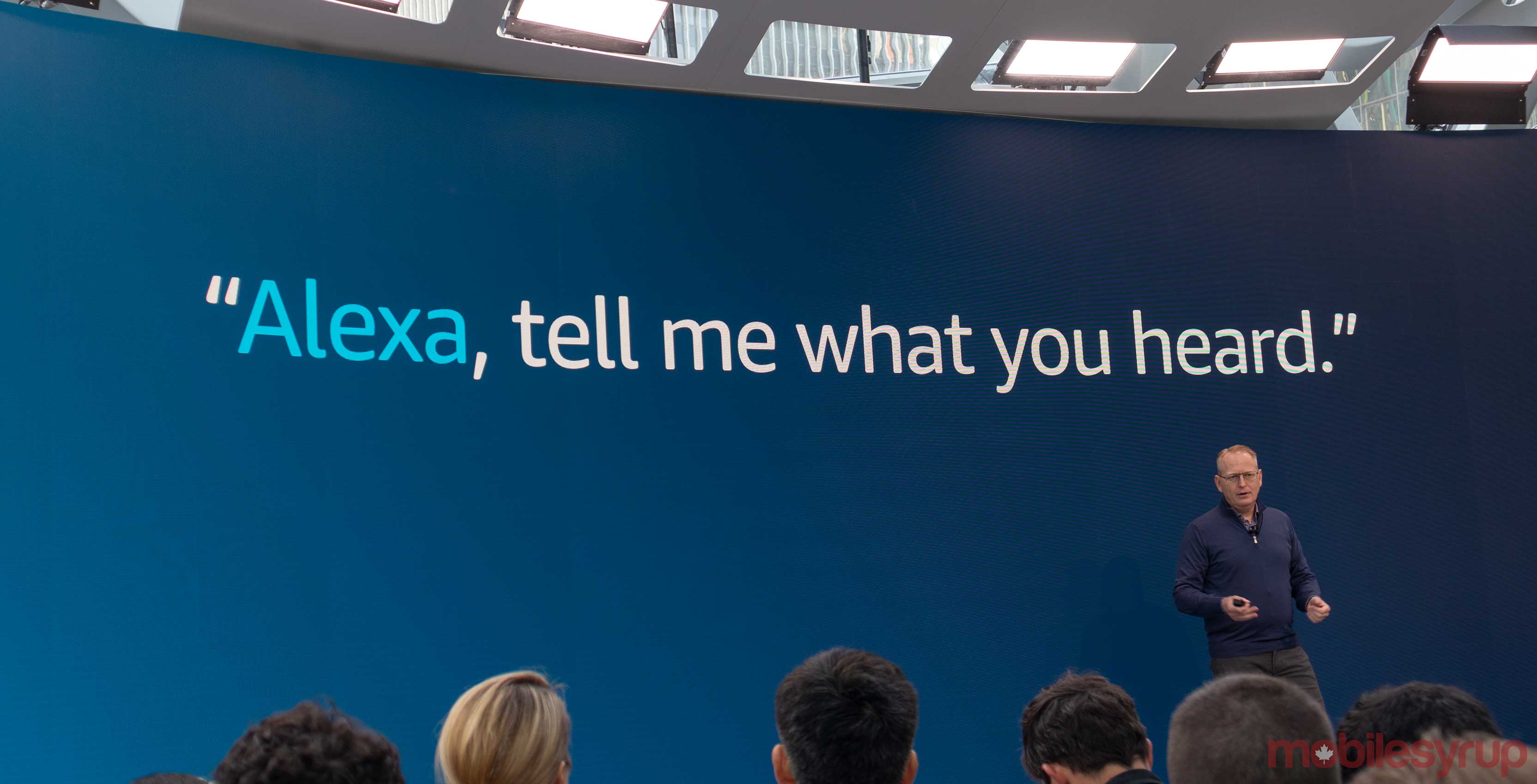 Amazon announced an absolute barrage of new features and hardware at its September 25th ‘#AskAlexa’ event, so MobileSyrup went hands-on with the latest products coming to the Canadian market.

The primary five hardware devices the company showed off are all coming to Canada at the same time as they launch in the U.S., which means there’s a lot to unpack. 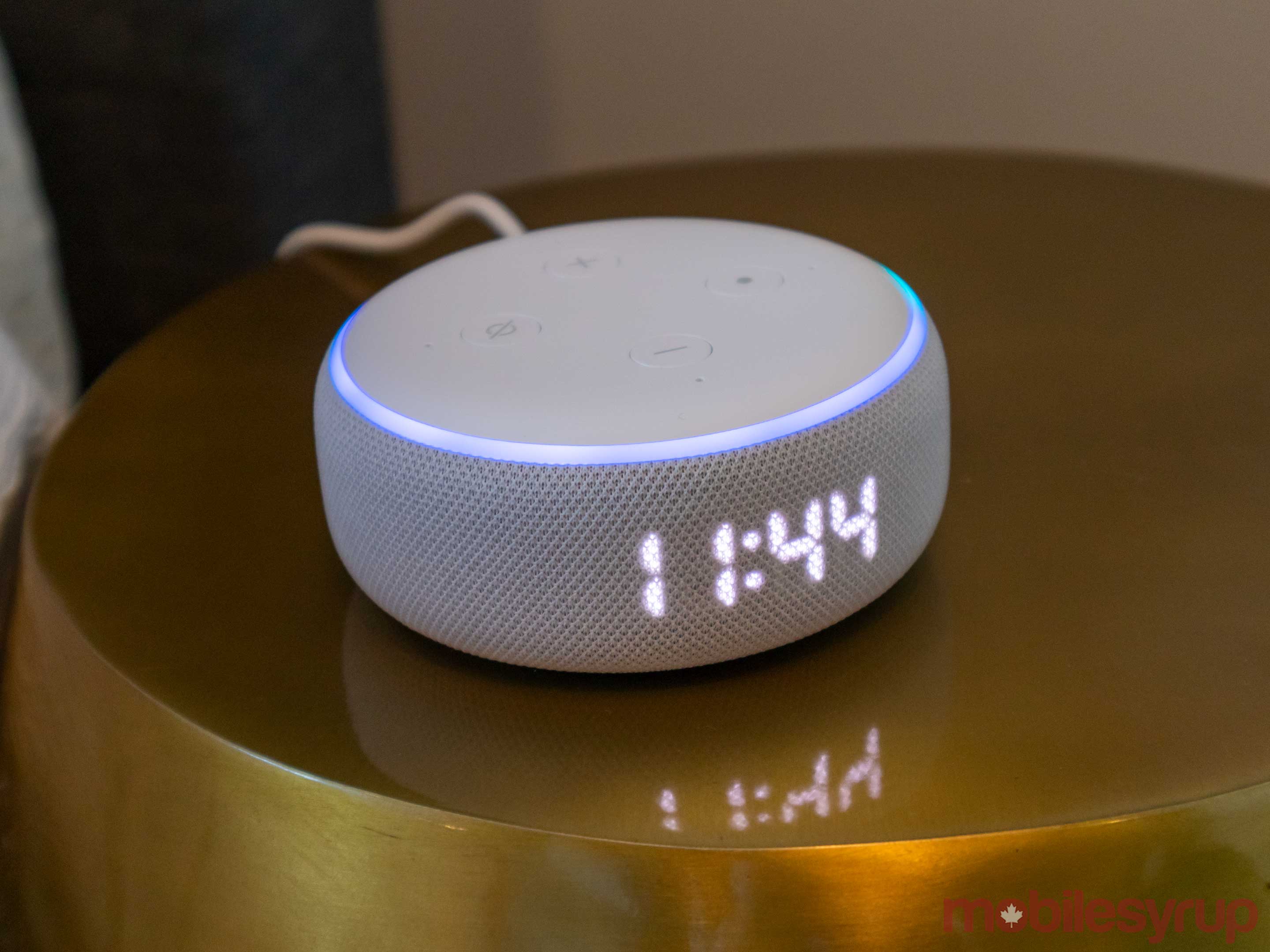 For some, this may be a bit of a dry announcement, but I found that the new Echo Dot with a built-in LED clock was one of my favourite devices shown off today.

The speaker looks just like the 3rd generation Echo Dot from last year, but there is a four-digit LED panel hidden under the mesh fabric.

Adding the LED clock face makes the company’s main entry-level Echo a lot more useful in locations like the bedroom. The screen even dims to match the ambient lighting conditions in the room.

In terms of other changes, Amazon added the excellent tap to snooze functionality from the Echo Show 5 into this new device. So instead of saying “Alexa, snooze the alarm,” you can just hit it on the top to get nine more minutes of shut-eye. 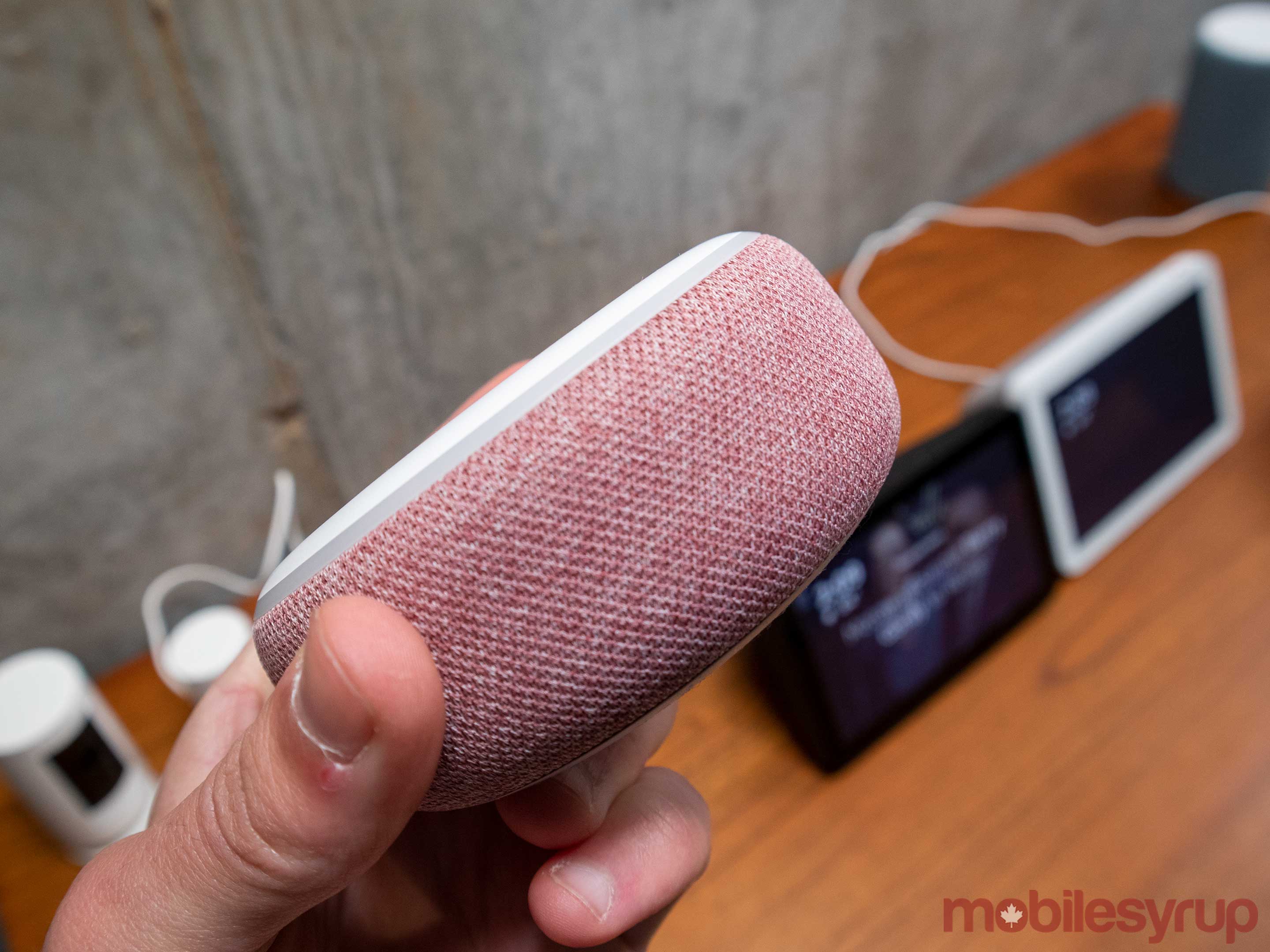 The new ‘Plum’ Echo Dot. You can’t get this colour with the new clock interface.

The screen can also display timers and the temperature outside if you ask Alexa for the weather. Two dots light up on the right side of the clock face to signify an enabled alarm or timer.

While the clock version only ships in white, the regular Dot ships in four colours including a new red-like ‘Plum’ variant.

The Dot with clock will be available to sit on your nightstand on October 16th for $79.99 CAD. Pre-orders for the new device are available now. 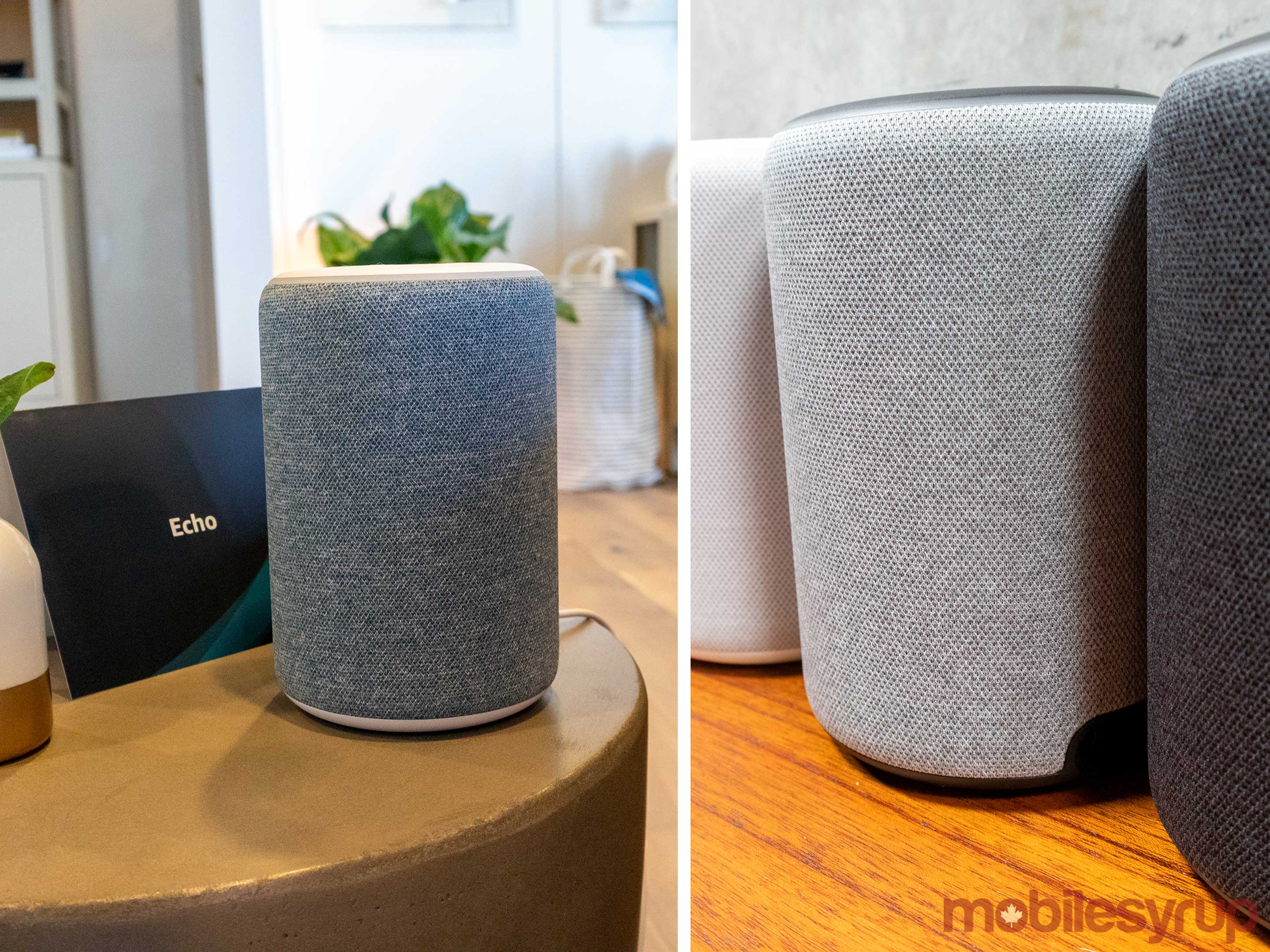 Amazon kept it simple when it refreshed the regular Echo this year by adding better speakers and tweaking the design.

The new design is a nice change as it now looks like an Echo Dot that had a growth spurt. The weaved fabric that wrapped around the Dot now shrouds the full-sized Echo, and it looks fantastic. There’s still the light ring around the top of the device that people are used to and the same array of volume, connect and mute buttons.

To add some flair to the new look, Amazon also added an additional colour to the Echo lineup called ‘Twilight Blue.’ The new blue hue looks great and features a white top like the new Plum Echo Dot. This means you can now get the Echo in ‘Black,’ ‘Grey’, ‘White’ and ‘Blue.’

To really make the new Echo an appealing buy, Amazon packed the same audio technology into it that is included in its Echo Plus.

While this may seem like Amazon cannibalizing its own products, the Echo Plus still features smart home hub technology and a temperature sensor.

During my brief time with the new Echo, I think it looked awesome and I was impressed with the volume and the clarity it was able to produce. While the Echo Studio may have been Amazon’s showstopping speaker today, the new Echo shouldn’t be overlooked since it’s likely good enough for most people.

The new Echo can be pre-ordered right now on Amazon.ca for $129. The smart speaker is set to release on October 16th. 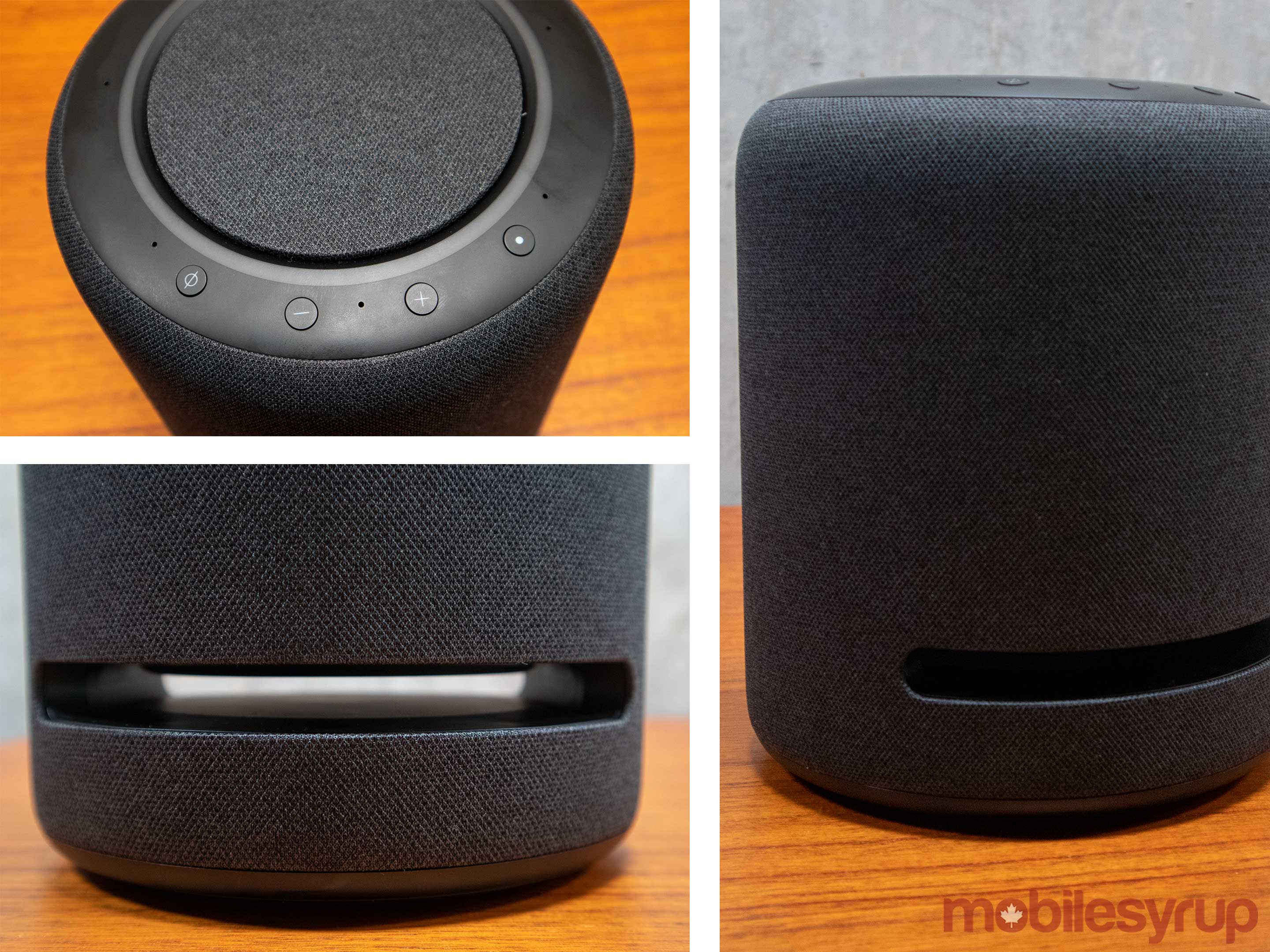 This is one of the missing links from Amazon’s Echo product line that is sure to delight a lot of audiophiles who use Echo devices for multi-room audio playback.

The Studio features five speakers — three mid-range woofers, a high-frequency tweeter and a 5.25-inch subwoofer. In my time listening to the Studio I think it was plenty loud, but I didn’t get to listen to it enough to judge its audio fidelity.

That said, in my brief demo time I think it sounded decent and a single Studio filled the rather large presentation room with sound during the announcement. My second listen later in the day didn’t impress me as much, but it was a very brief test with a song I’d never heard before.

Amazon also says that the speaker is Dolby Atmos compatible so you can connect two of them to a Fire TV Stick 4K for surround sound. This only works if the content you’re watching supports the high-end audio format.

The device can also act just like a regular Echo so you can ask it about the news, weather, or whatever else pops into mind. Though Amazon’s main focus is definitely to use it as a music player. 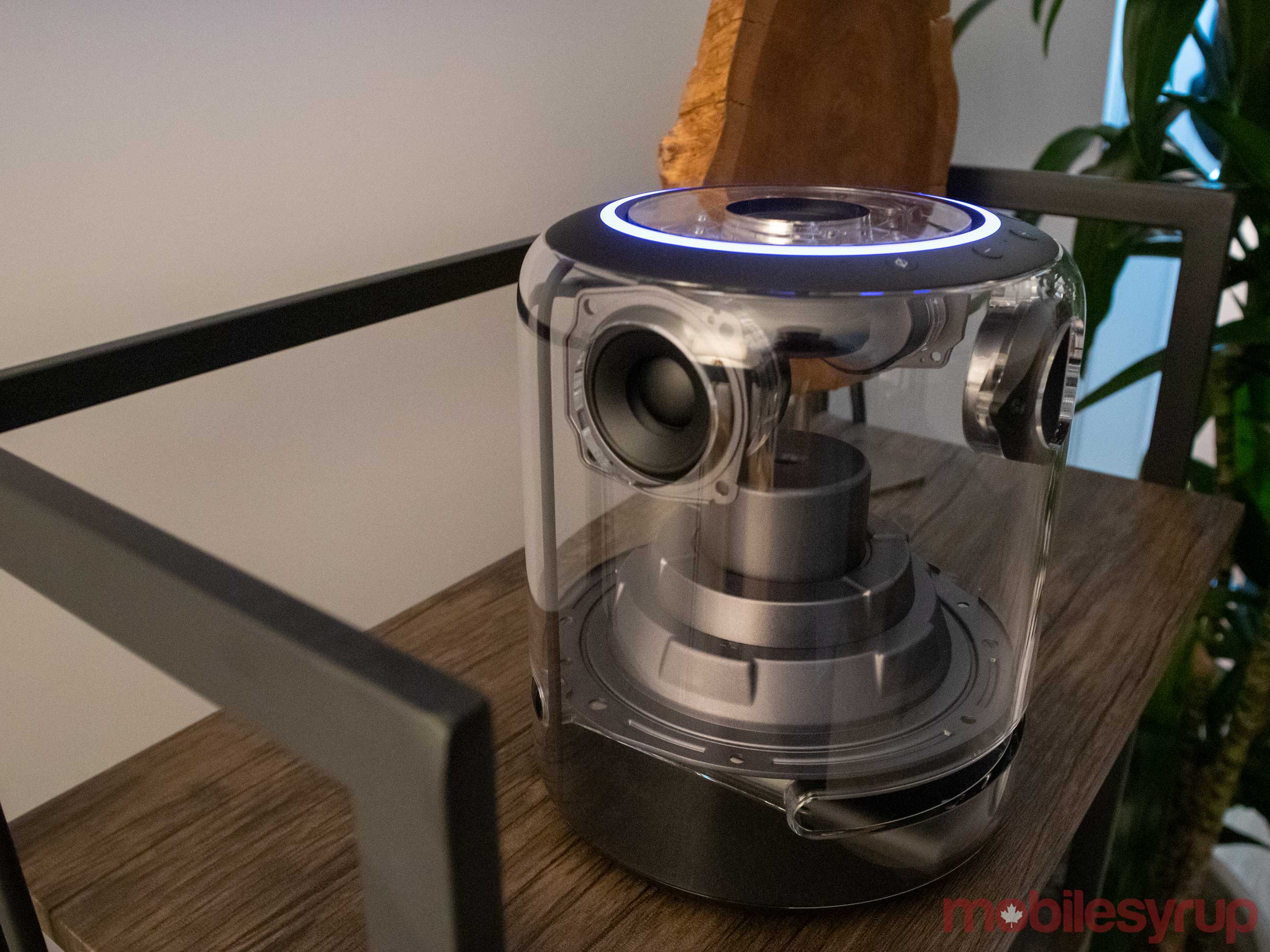 The internals of the Echo Studio. (Not the retail version unfortunately.)Design-wise it’s maybe a little bit smaller than the recently released Sonos Move, but larger than Apple’s HomePod. It also features a unique cutout near the bottom to help maximize the bass sounds.

It only comes in black, but it follows the familiar fabric-wrapped design language that the other Echo products use so it won’t look out of place in your home.

Like the Echo Plus, this device also has a smart home hub for controlling supported smart gadgets.

Just like the Move and the HomePod, the Studio can also analyze the spaces it’s sitting in and tune itself to maximize audio playback in that room. It does seem a little odd that Amazon didn’t include this feature in the new Echo, but none-the-less it’s exciting to see here.

I’ll be very interested to see how the new device stands up compared to existing high-end audio devices from Sonos, Apple and Google.

The best part about the studio is that it offers all of this for $259 CAD, which is much lower than the HomePod and the Google Home Max.

Pre-orders begin today and the Studio ships on November 7th. 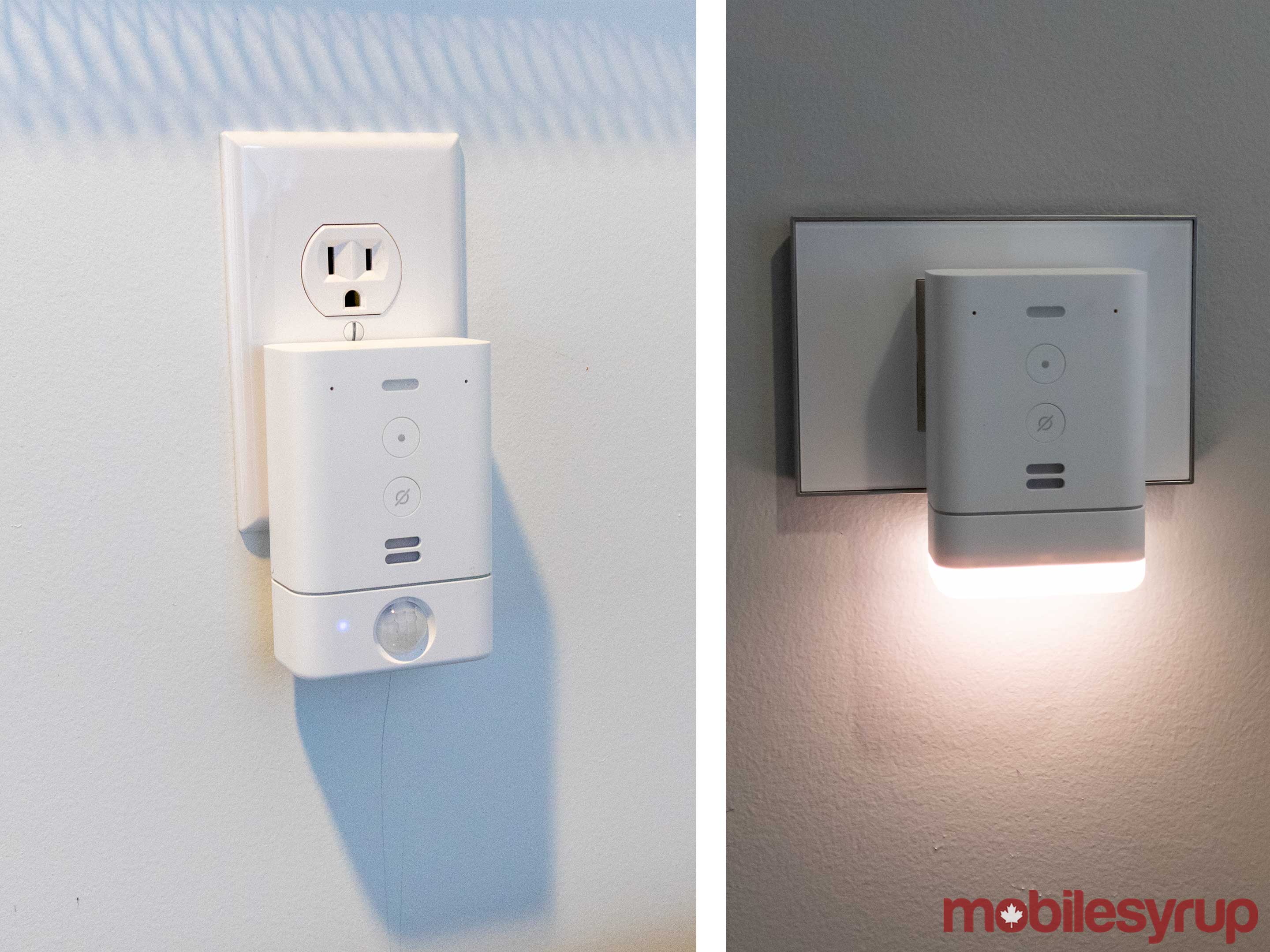 Perhaps the most interesting device to be announced today is the cheapest and it’s called the Echo Flex. The device plugs into the wall like a carbon monoxide detector.

I see the Flex having about three unique goals. One, it’s only $35 Canadian, so it’s the cheapest and most accessible Echo device available in Canada. Two, it’s super small and has the ability for unique attachments to automate the Alexa experience easily, and finally, it can fit in all kinds of weird places all over people’s homes.

Users can buy two $14 add-ons for the device. The first is a nightlight, and the other is a motion sensor. While it’s been possible to use Ring branded motion sensors with Alexa before, this makes it more accessible and puts the feature into more users’ hands.

For example, you could set the motion sensor to turn on your bathroom lights or open your garage door, depending on where you’ve placed it.

Beyond the attachments, you can place it into weird places like the laundry room or the bathroom without having a ton of extra wires to deal with. Amazon says it’s not meant to play music since it has a tiny speaker, but it easily adds Alexa to more rooms in your house for a low price, which will get users to interact with the assistant more.

The Flex is $34 CAD and will be available on November 14th. 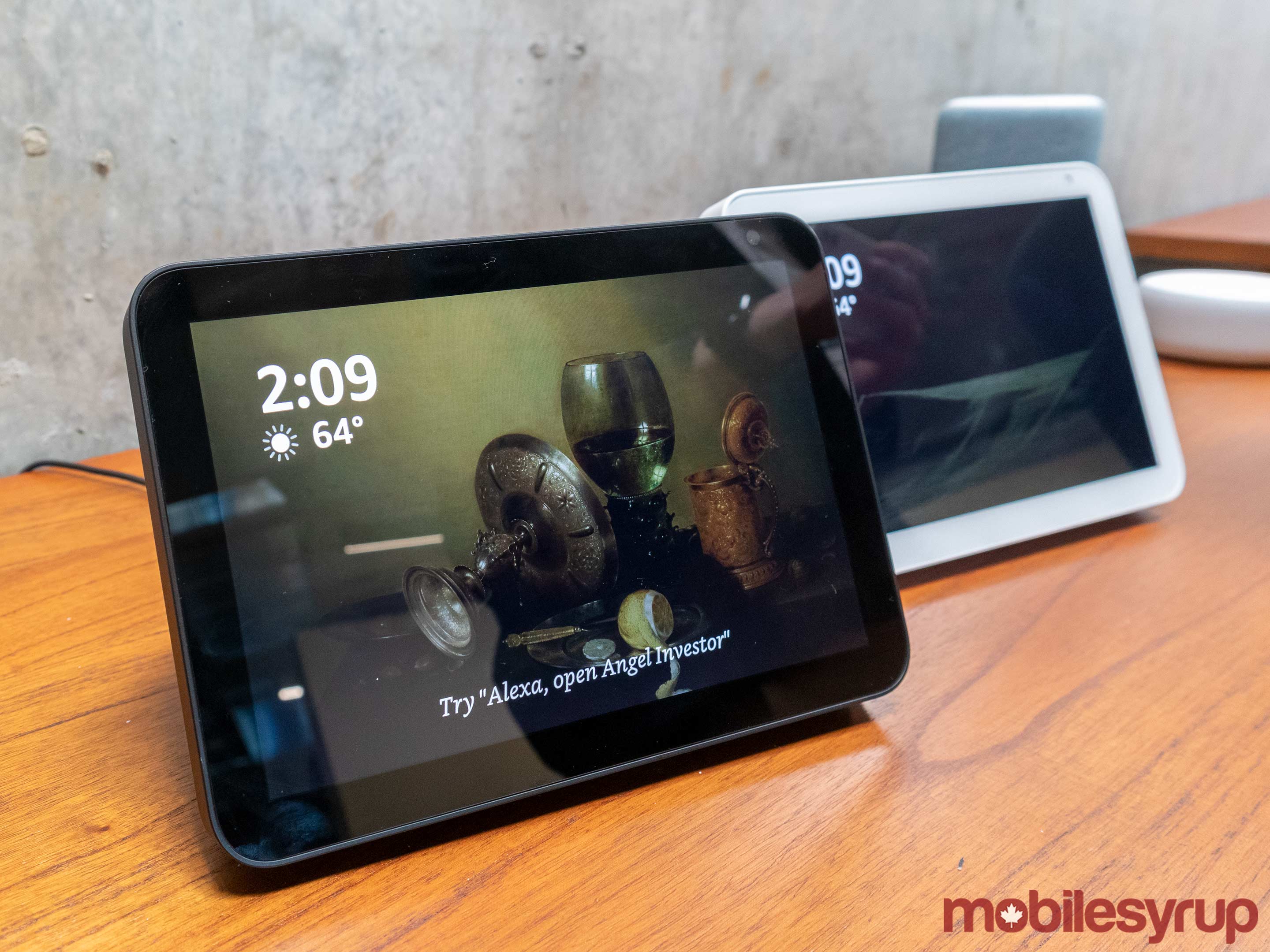 I didn’t get to spend a lot of time with the Echo Show 8, but I still walked away impressed by it. The device takes the cute design of the Echo Show 5 and scales it up three inches.

The Show 8 is available in both ‘White’ and ‘Black’ and features a cloth covering on its rear.

Amazon says that the new smart display will have the speaker capabilities of the larger Echo Show 1o while maintaining a smaller footprint. The Echo Show 8 seems like a decent smart display for larger rooms like a kitchen or a living room.

In terms of, design I don’t find it as appealing as Facebook’s new Portal devices, but its $170 price tag makes up for that.

Overall, this product rounds out Amazon’s first-party smart display offerings, which is useful as it now gives consumers even more choices.

Overall, all of the Echo hardware that was shown off today helps Amazon round out its digital assistant offerings. From the tiny Echo Flex to the large Echo Studio, there should be a device now that fits neatly into any room in your house.