Sonos Move Review: Taking the music with you

The new Sonos is meant to go anywhere, but it excels at home 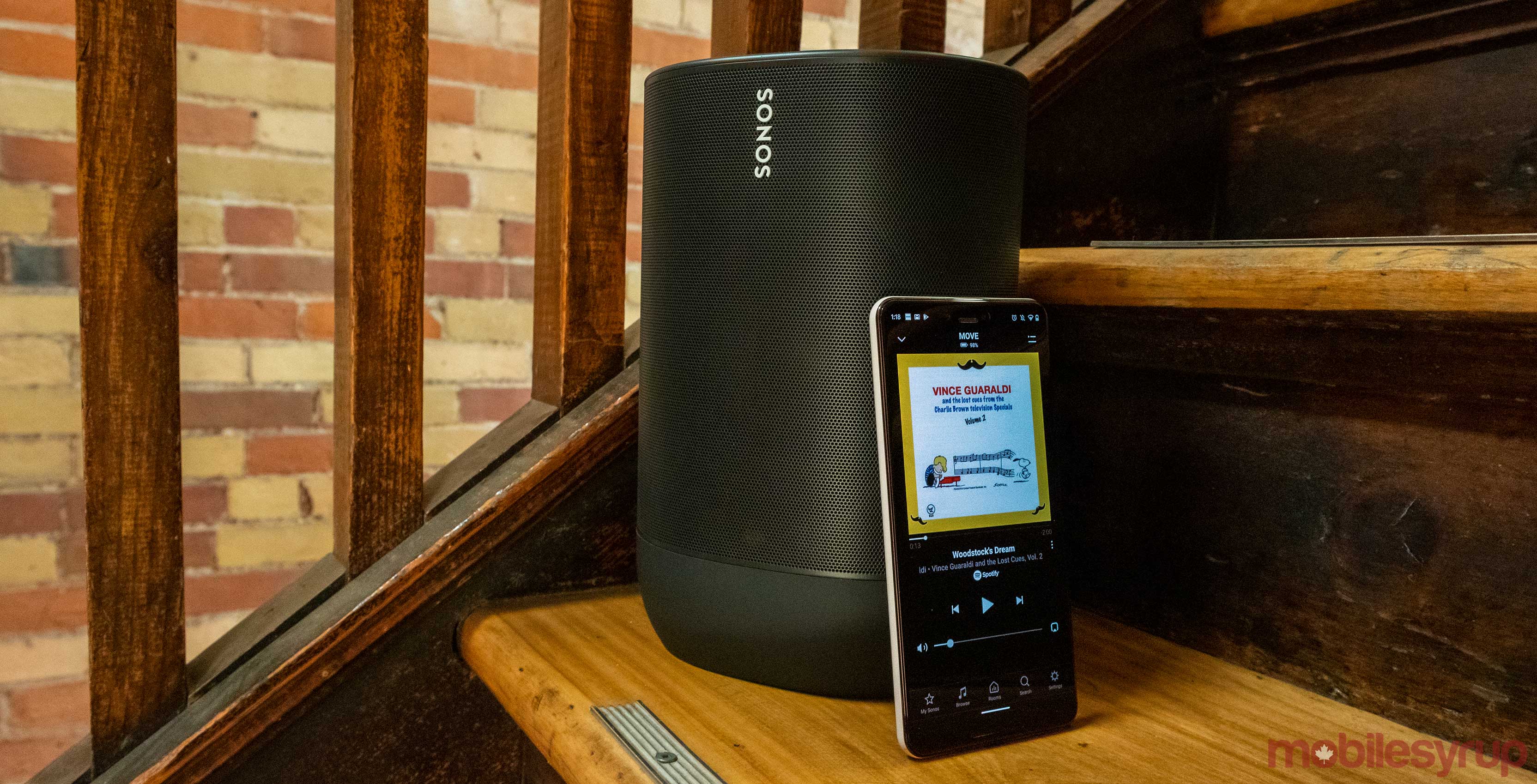 Sonos is dropping a new portable speaker called the Move, and if you’re embedded in the company’s ecosystem, then this is hands-down the next device to get.

Sonos makes a variety of speakers and audio equipment that wirelessly play music together to create multi-room audio setups. The system can also be configured to work with a TV or even a record player depending on the devices you have. While all of this is great, one major issue plagued users: they couldn’t easily move their speakers.

That’s where the Move comes in. If you want to listen to a vinyl outside on the patio, just pick up the Move and lug it outside. Want to play some wake-up music while you’re having a shower? Easy, because no matter where you want music in your house, the Move has your back. You can even take it outside of Wi-Fi range since, for the first time in a Sonos device, it features usable Bluetooth.

The speaker takes everything Sonos has built its reputation on, like fantastic sound quality and seamless multi-room audio, and adds in a few new features, including Bluetooth and a 10-hour battery. Combined, these two features make the Move the most versatile speaker in the company’s portfolio 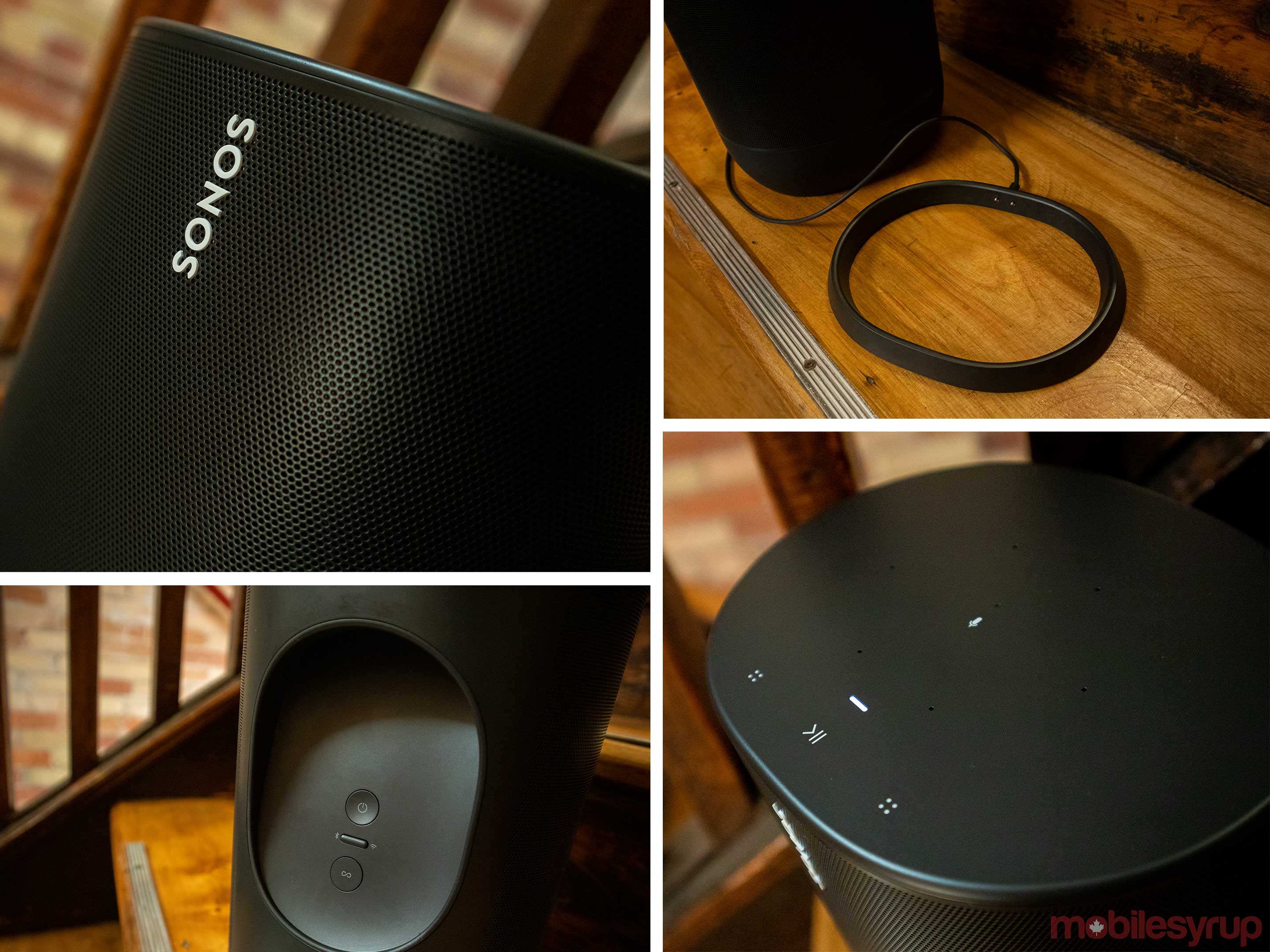 One thing that stands out about the Move is the attention to detail. Sonos spent around two years developing and refining its first portable speaker — and you can tell.

It feels and sounds excellent and can withstand drops, rain, sand and more.

In terms of looks, the Move has an appealing design. It features a simple, yet broad body, all while being relatively understated. This makes it an unobtrusive addition to most rooms.

Most of the speaker is covered in a metallic black grill with a single Sonos logo running vertically near the top. The bottom fifth of the speaker is made of plastic covered with silicone so it doesn’t slide around when playing music.

There’s also an integrated handle in the back that makes it easy to carry with one hand. 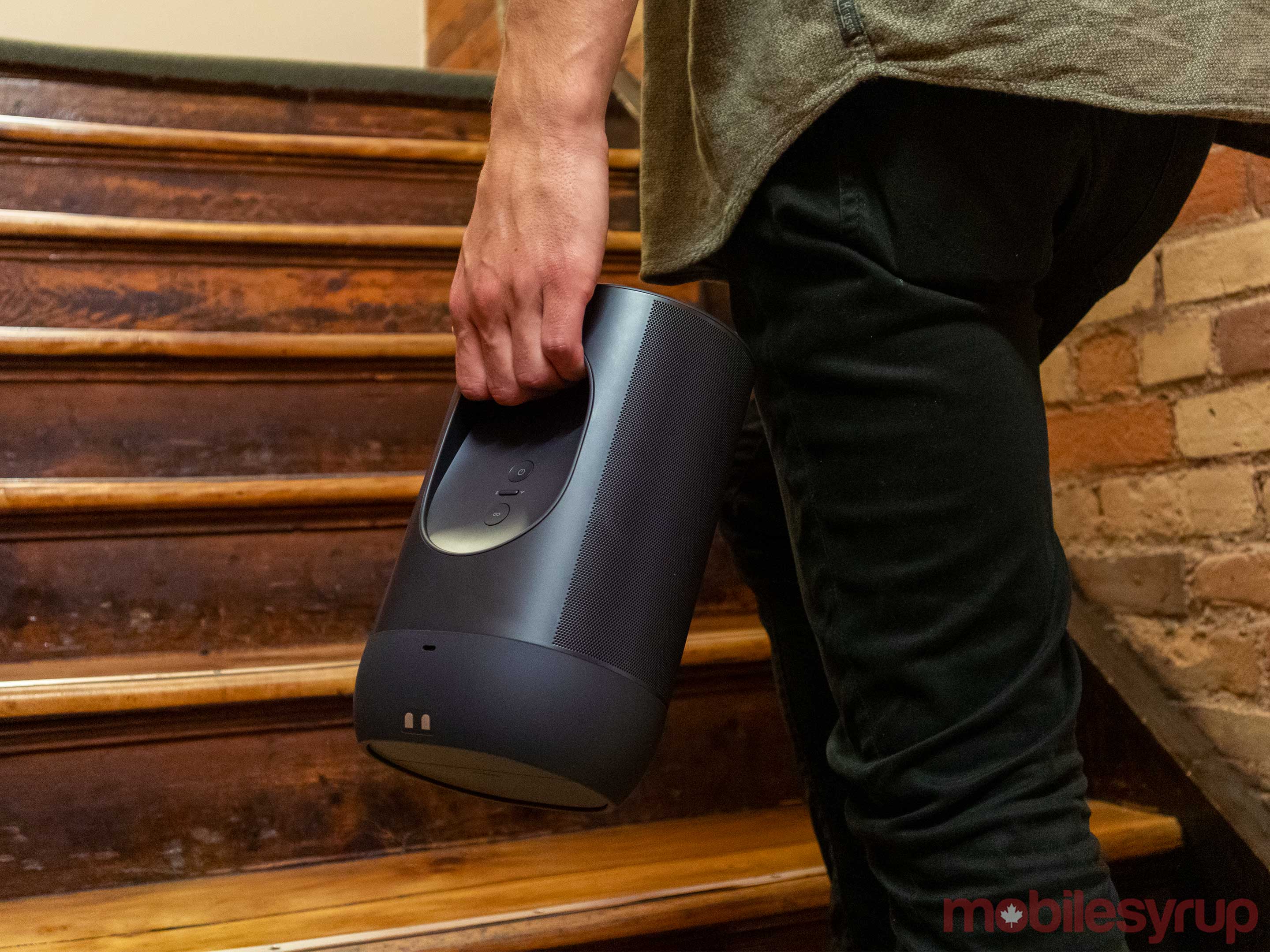 It’s only available in one colour called ‘Shadow Black.’ To my eyes, it looks like a very dark grey. Sonos purposefully chose this colour since it doesn’t get uncomfortably hot when sitting in the sun.

On top of the speaker, you’ll notice four icons: a microphone symbol for muting the four far-field mics, a play/pause button and two icons consisting of four dots to the left and right of the play/pause button. Tapping those buttons turns the volume up and down and swiping from one to the other skips forward or backwards. If you hold the play button, it also connects the Move to whatever music your other Sonos speakers are playing.

There are also two lights. The smaller one near the microphone button indicates if the device’s mics are turned on or not. The other larger light near the play/pause icon is the status light. It can mean a wide variety of things.

On the back, there are three toggles: the power button, a Bluetooth/Wi-Fi switch and the ‘Join’ button for setting up the speaker.

The devil is in the details 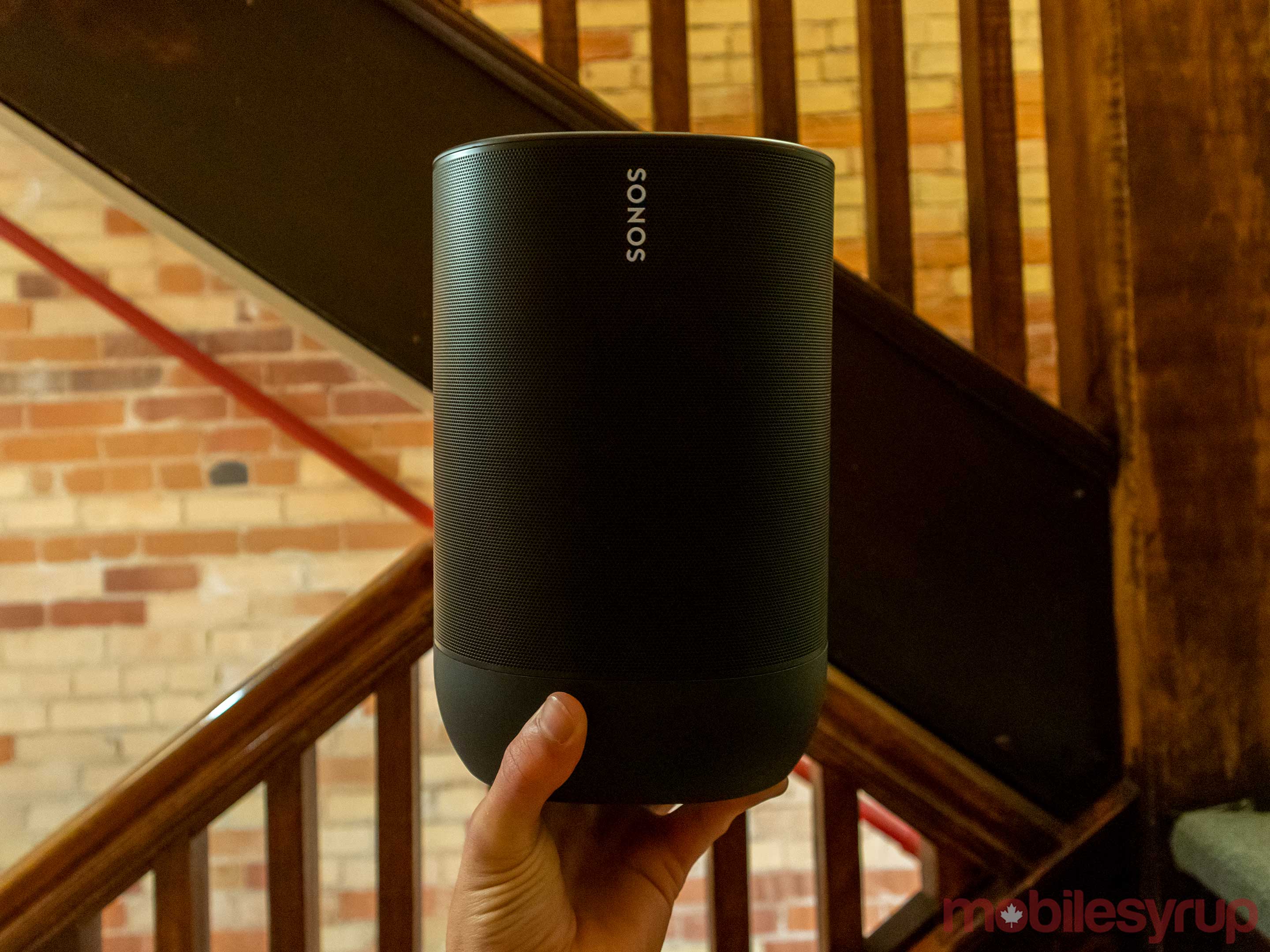 One of the best things about the Move is how tough it is.

The speaker has an IP56 water and dustproof rating. This means you can take it to the beach, cover it in sand and wash it off with ease. It can also play music in temperatures up to 55 degrees Celsius and as low as minus 10.

As I’ve said before, the speaker is sizable due to its integrated 2,420 to 2,500mAh battery and large speakers, which I’ll get into later. Sonos’ website lists the battery like this so it seems that some models have a smaller cell.

Sonos says that the battery lasts for about 10 hours and in my experience, this is accurate, though battery fluctuates slightly depending on how loud you’re playing music.

Sonos has also included a little charging dock with the Move. It can hit about 50 percent of the Move’s charge in an hour and then it takes around three hours to charge it to 100 percent.

You can also charge the speaker with a USB-C charger, but Sonos recommends using power bricks that supply either 2V/3A, 15V/3A or 20V/2.25A.

One detail I really like is that the battery is replaceable. This means that as your speaker ages you can get a new one, and is an excellent move against planned obsolescence.

Much like most of Sonos’ other speakers, the Move can act as a conduit for Amazon’s Alexa or Google Assistant. It’s also AirPlay 2 and Spotify Connect compatible, so you can use it without the Sonos app if you want.

It sounds clear, clean and crisp 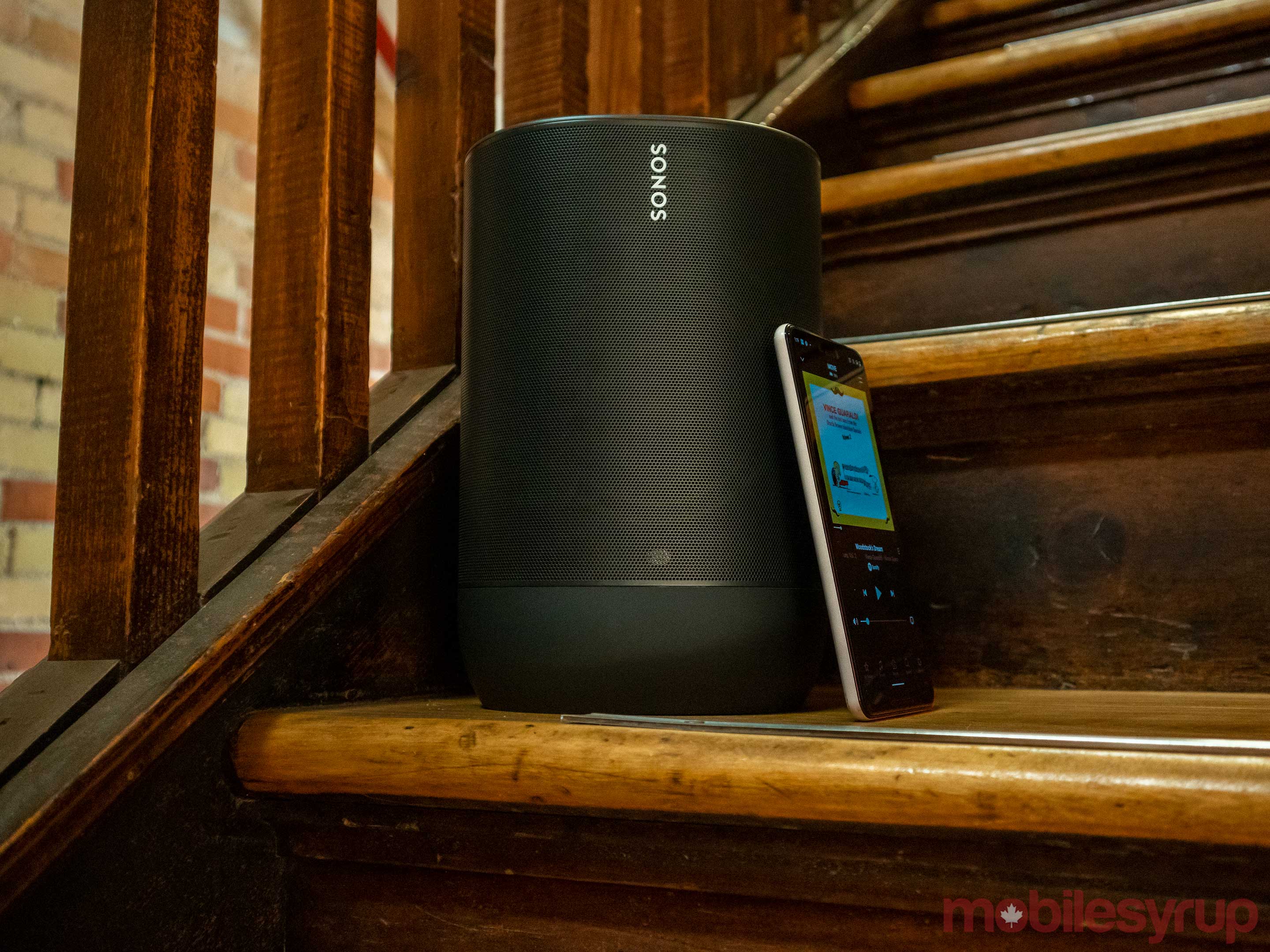 There are two speakers inside of the Move, a single tweeter working in conjunction with one mid-range woofer. Each speaker is powered by a Class-D digital amplifiers.

The tweeter creates the high end of music and the woofer provides faithful mid-range sounds and deep bass notes.

Together the entire system sounds incredibly crisp, detailed and accurate. Plus it gets quite loud and retains an outstanding balance between highs, mids and lows at high volumes. One of my favourite aspects of it is that I could often hear quiet background sounds that I didn’t notice on smaller speakers.

Overall the sound has a ton of body as well as the power to not only fill a room but also blanket a wide outdoor area with music.

When I was testing the Move I listened to a wide range of music. This included pop and rap from Kanye, jazz from Vince Guaraldi and R&B from Jamila Woods, along with some country and other genres. Across the board, the Move portrayed each one accurately.

While Sonos needed to put lots of power behind the speakers, it came with the trade-off of the Move weighing 6.6lbs or 3kg. It’s also a lot larger than other portable speakers. It’s 24 cm tall (9.44-inches) and about 16 cm (6.3-inches) wide. Overall, it’s not impossible to lug around, and it also has the sound to back it up, so it’s a compromise I’m willing to make.

It’s also worth noting that while you’re using the Move connected to Wi-Fi, it uses a new Sonos feature called Automatic Trueplay. This feature listens to the area the Move is in and tunes it to a specific room’s shape.

In my testing, Auto Trueplay worked as advertised, making sure the listener was always getting the best performance possible. However, it’s a bit annoying that it doesn’t work with Bluetooth.

Although the speaker can tune itself to any environment, it doesn’t provide perfect sound when it’s facing away from you.  It is lacking 360 degree sound output, so the Move sounds better when it’s directed at you. This isn’t a knock on the speaker, but more of a heads up for when you set it up. 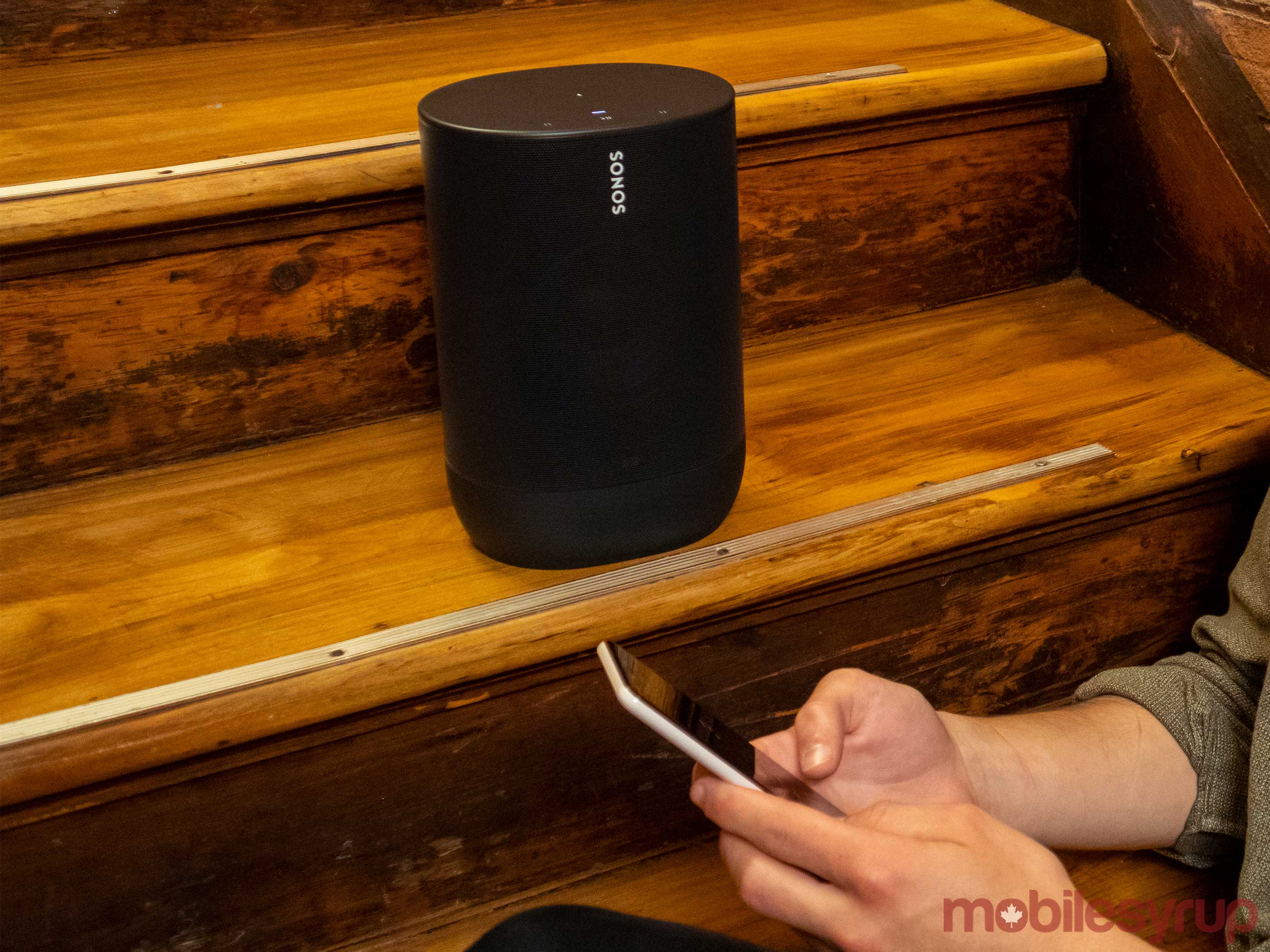 At its very core, the Move is a superb speaker that has the power to play music outside at a party and the versatility to come inside and integrate into an existing Sonos setup.

But if you don’t already have an existing Sonos set up, or at least one other Sonos speaker, this is a hard sell since it’s so expensive.

If you already own a few Sonos, this is for sure the next one you should buy. It integrates into an existing Sonos ecosystem perfectly.

But you can pick it up and move it which opens up many more possibilities. Say you have a Sonos soundbar, and you’re watching something like a hockey game on the TV, but you have to go to the kitchen mid-game to prepare food. Just take the Move with you and you’ll still be able to hear the TV. You can even use Google Assistant or Alexa to set cooking timers.

Since it’s more often than not on its dock, the Sonos Move is charged and ready when you pick it up and can be moved just about anywhere. 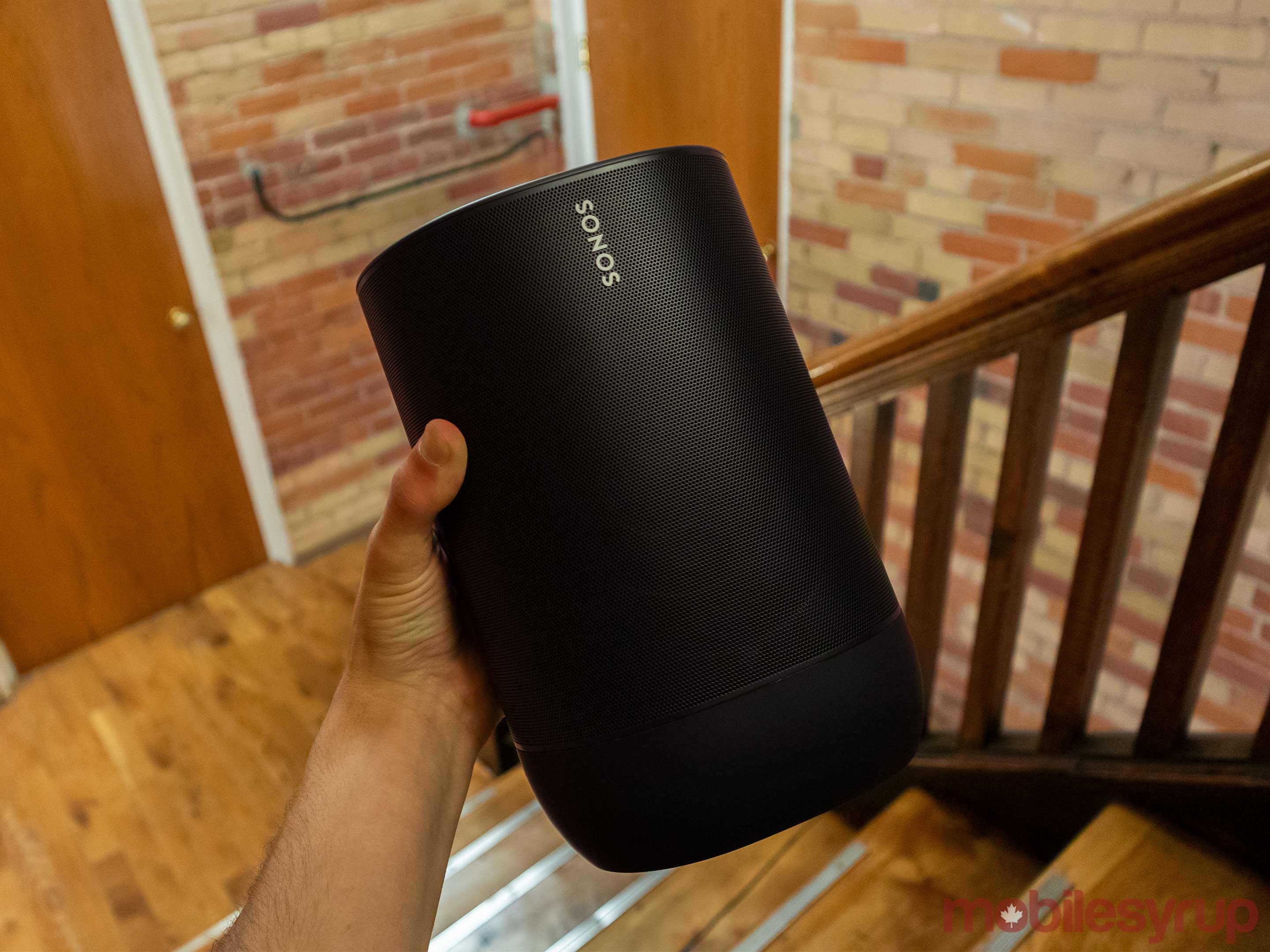 If you don’t already own at least a couple of Sonos devices, the Move might not be the most useful speaker for you.

One aspect that’s a little annoying is the Move’s size. While I understand why it’s this big, I do wish it was a little smaller so I could easily put it in a bag.

It’s also priced really high for a portable speaker. While other options in the market like the UE Boom 3 cost around $200 CAD, the Move seems a tad expensive in comparison. If you have other Sonos speakers then maybe it’s an easier pill to swallow, but if you just want it to use it as a Bluetooth speaker to take to your cottage, I’d look elsewhere. 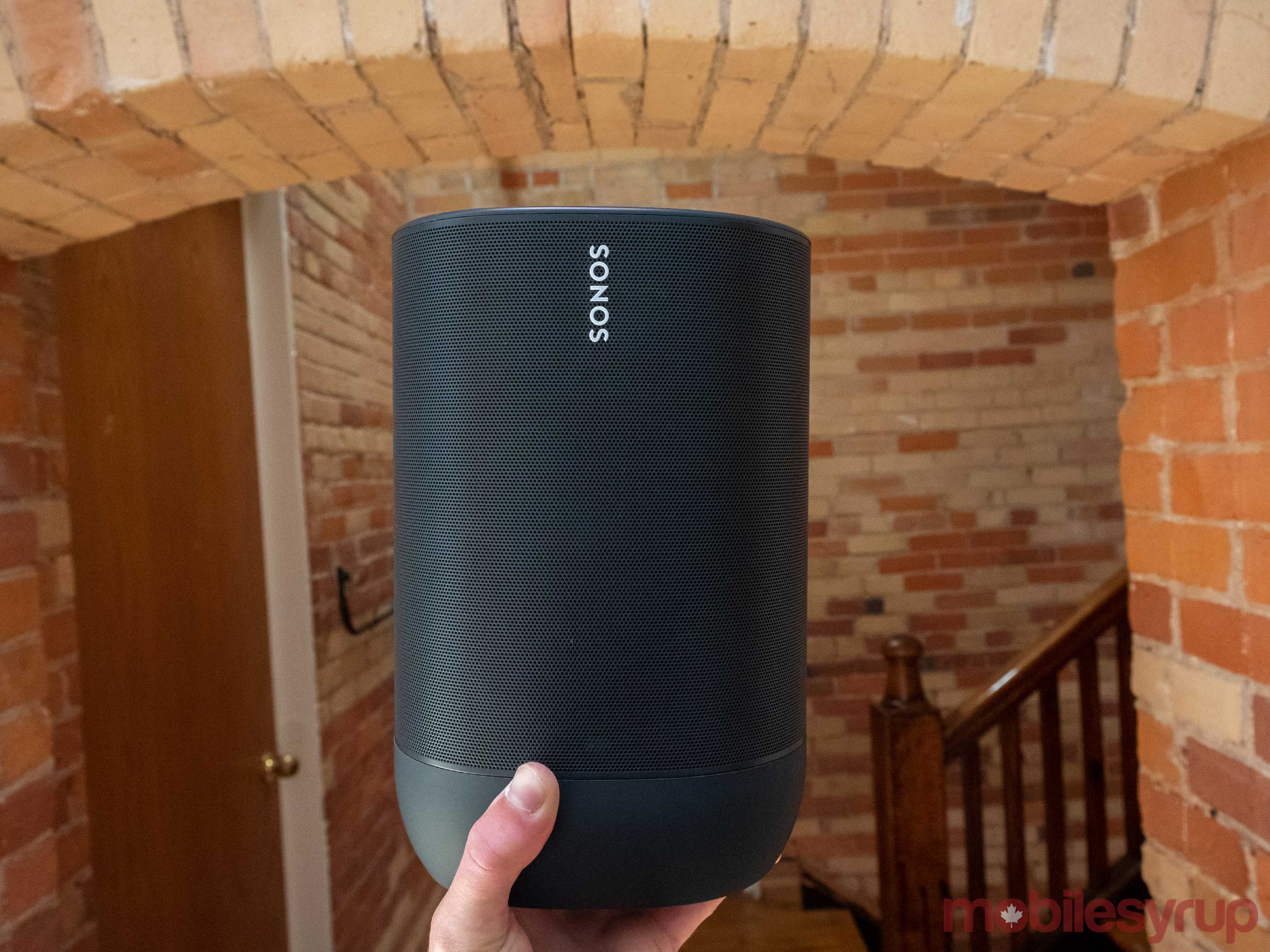 The perfect speaker for Sonos users

The Sonos Move is an excellent speaker with a ton of neat features that makes it the perfect addition to any Sonos-equipped home.

The sound quality made me smile every time I turned it on, and being able to play records that are then digitized by the Sonos Amp and sent to the Move in another room or outside is an amazing feature that is sure to please audiophiles.

Not to mention that its battery can be replaced so it should last for a long time, which helps recoup its high upfront cost in Canada.

If you already own some Sonos products then get the Move. If you don’t, weigh your options very carefully since a lot of the features I liked the most about it won’t be available to you.

You can Pre-order the Move online from Sonos $499 CAD. It will be on store shelves on September 24th.

"If you already own some Sonos products then get the Move. If you don’t, weigh your options very carefully since a lot of the features I liked the most about it won’t be available to you"