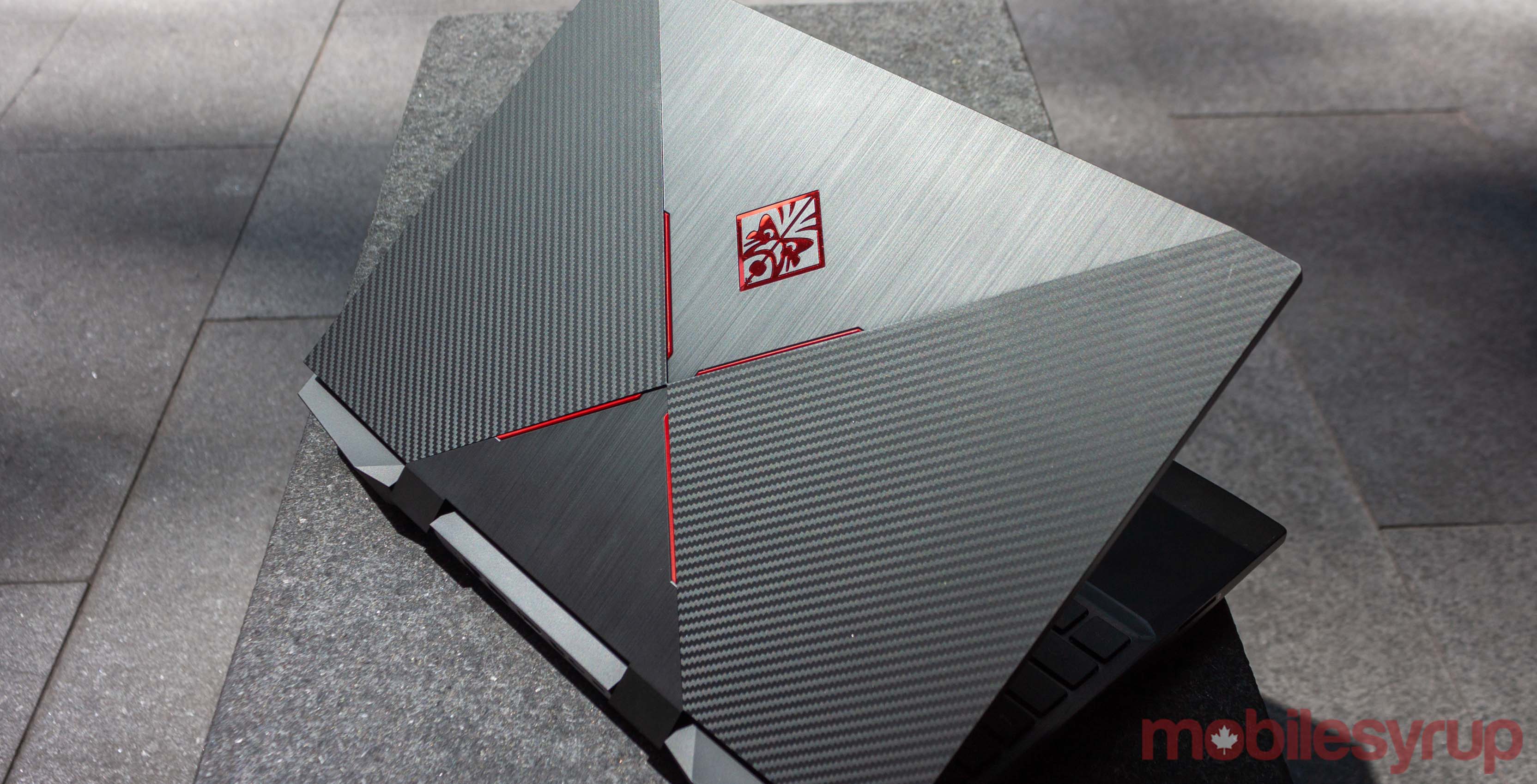 Gaming laptops are a funny category of portable computing. These are often some of the most powerful computers the average consumer can get their hands on, loaded up with excellent CPUs and discrete graphics cards, large displays with high refresh rates and more.

At the same time, gaming laptops fail at the fundamentals laptops strive for: portability, affordability and usability. When I want to bring a computer on the go with me, I want it to fit in my backpack.

Despite my personal quibblings, many gaming laptops are competent machines. HP recently sent over one of its high-end gaming laptops, the HP Omen 15, which I had the pleasure of trying out, and it more than lived up to the reputation. While I won’t be doing a traditional review, I did want to share some of my thoughts and impressions about the Omen. 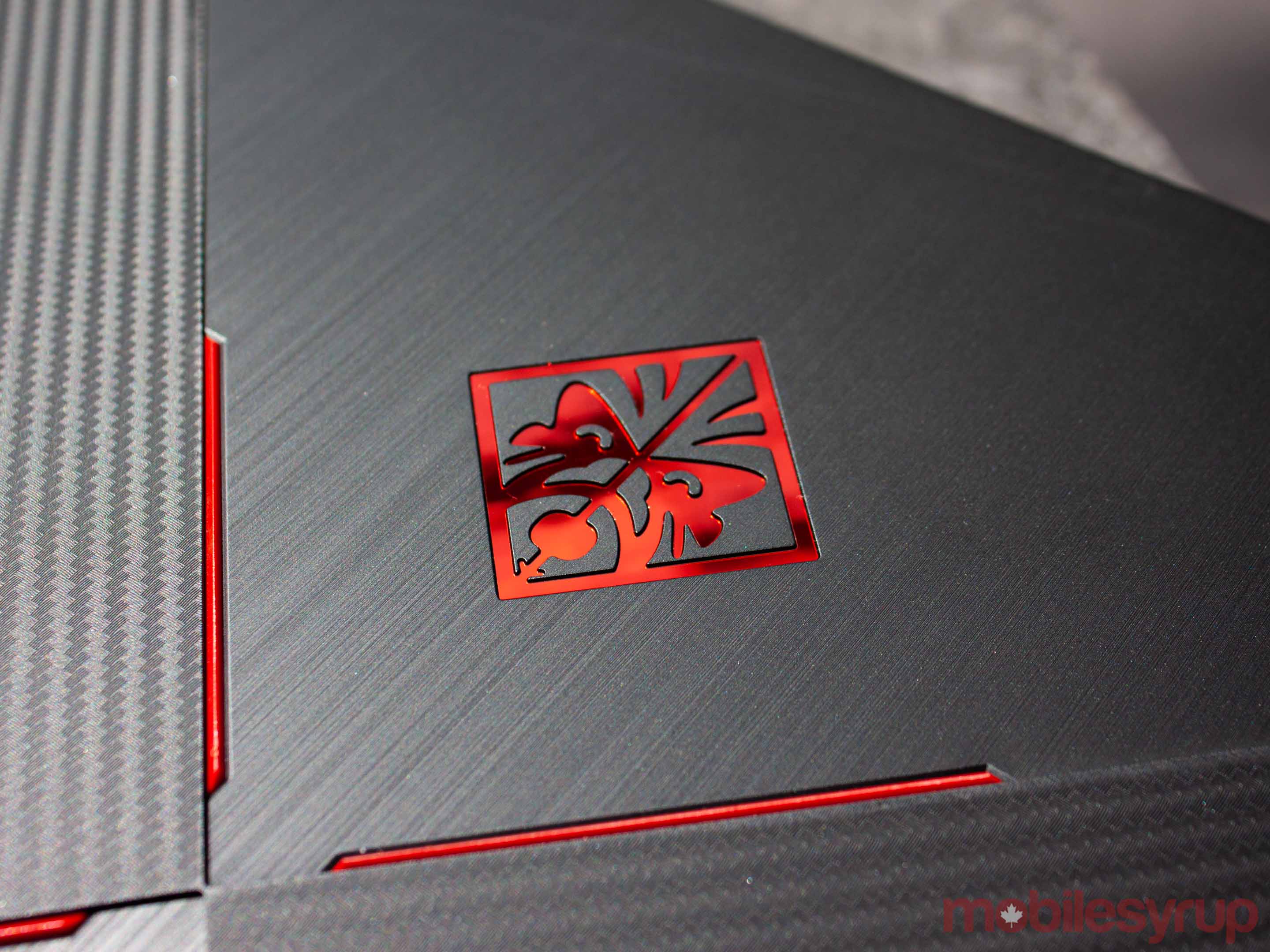 Over the last few years, gaming products, especially in the computer segment, have taken on a specific ‘aesthetic.’ This typically includes RGB lightning, aggressively chiselled and boxy designs, massive vents and fans, and even weird keyboard placements.

HP’s design choices with the Omen place the laptop squarely in that aesthetic, love it or hate it. Thankfully, the Omen 15 dodges some of the worst traits — like moving the keyboard — and keeps things in good order. And while I’m usually not a fan of the standard gamer aesthetic, the Omen does an excellent job of making it less garish than others.

The Omen’s lid sports a cool design that features a red ‘X’ marking the intersecting lines created by the two carbon fibre panels and two brushed metal panels. Above the red X is the Omen logo, also in red. I’m not entirely sure what the logo is, but it looks fancy. It makes for a rugged style that pleases the eye without distracting. However, I still prefer the more minimal look of laptops like HP’s Spectre x360, which only has a logo. 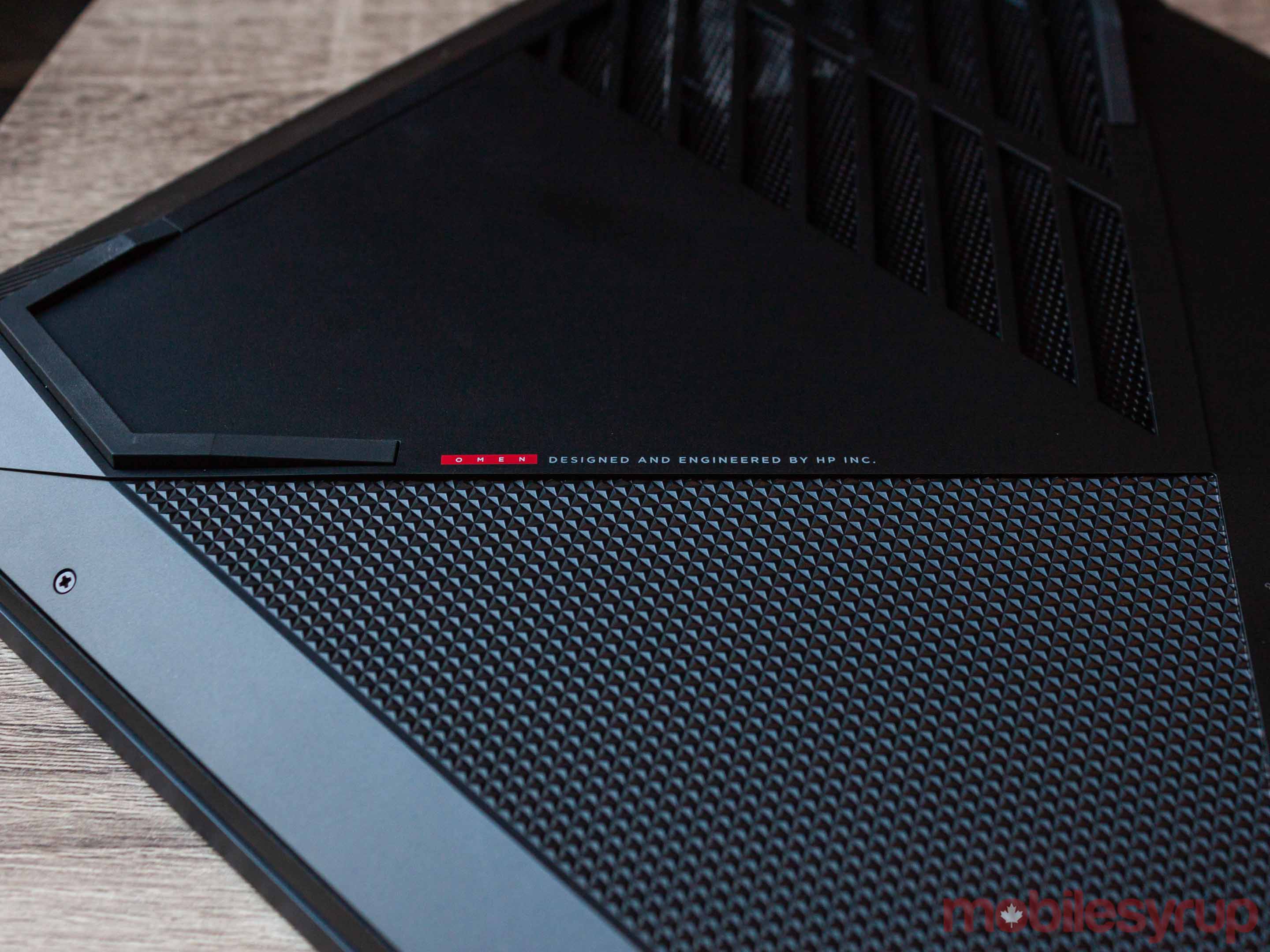 On the inside, the Omen 15 is also impressive. The model HP sent me sported an 8th Gen Intel Core i7-8750H processor clocked at 2.2GHz base with turbo up to 4.1GHz paired with 16GB of RAM. On the graphics side, it has an Nvidia GeForce RTX 2070 MaxQ with 8GB of VRAM. For storage, the Omen has a 128GB SSD and a 1TB hard drive.

Interestingly, some aspects of the Omen are configurable by users. For example, the RAM sticks are accessible, so you can swap those out if you want.

However, HP offers a variety of configurations for the HP Omen 15, so users can pick the right combination of CPU, RAM, GPU and storage to work for them. 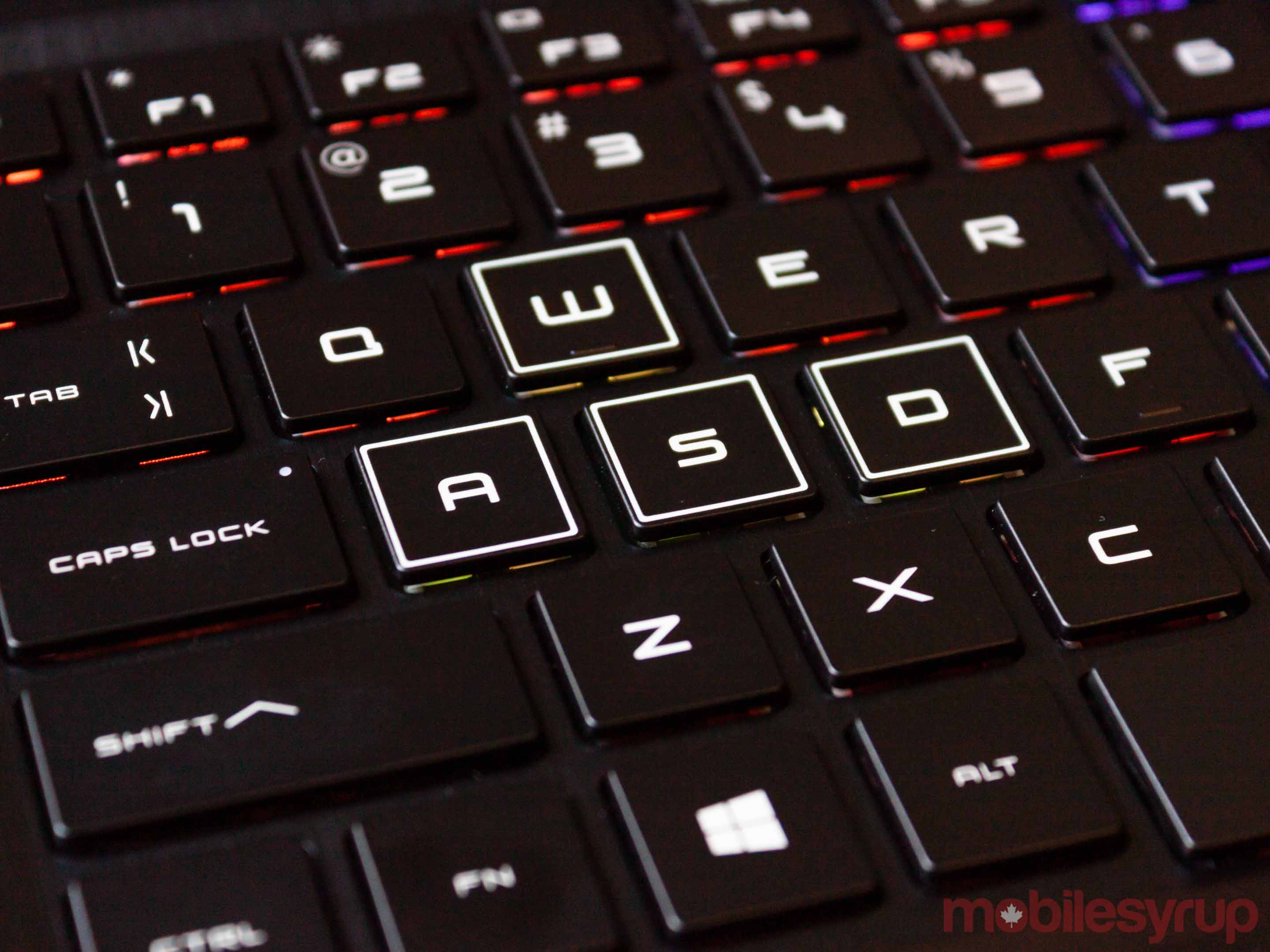 The HP Omen sports a 15.6-inch Full HD (FHD) IPS 1920 x 1080 pixel display, with a reasonably thin bezel around the edge. HP also applied an anti-glare coating to the screen, which helps in some situations but gives the picture a grainy look to my eye.

Ultimately, the display is more than usable. At the size the screen is, 1080p looks excellent, and it’s fewer pixels for the GPU to push so it helps with performance as well.

However, its colours aren’t great. HP lists the display with a colour gamut of 45 percent NTSC, which means that it isn’t super accurate. Further, the screen doesn’t get overly bright, with its maximum brightness sitting at about the 50 percent mark on my Spectre x360.

In other words, if you’re looking to use some of the Omen’s power to edit photos or videos, you may want to grab a second, more accurate display. For gaming and typical use, the screen was adequate. 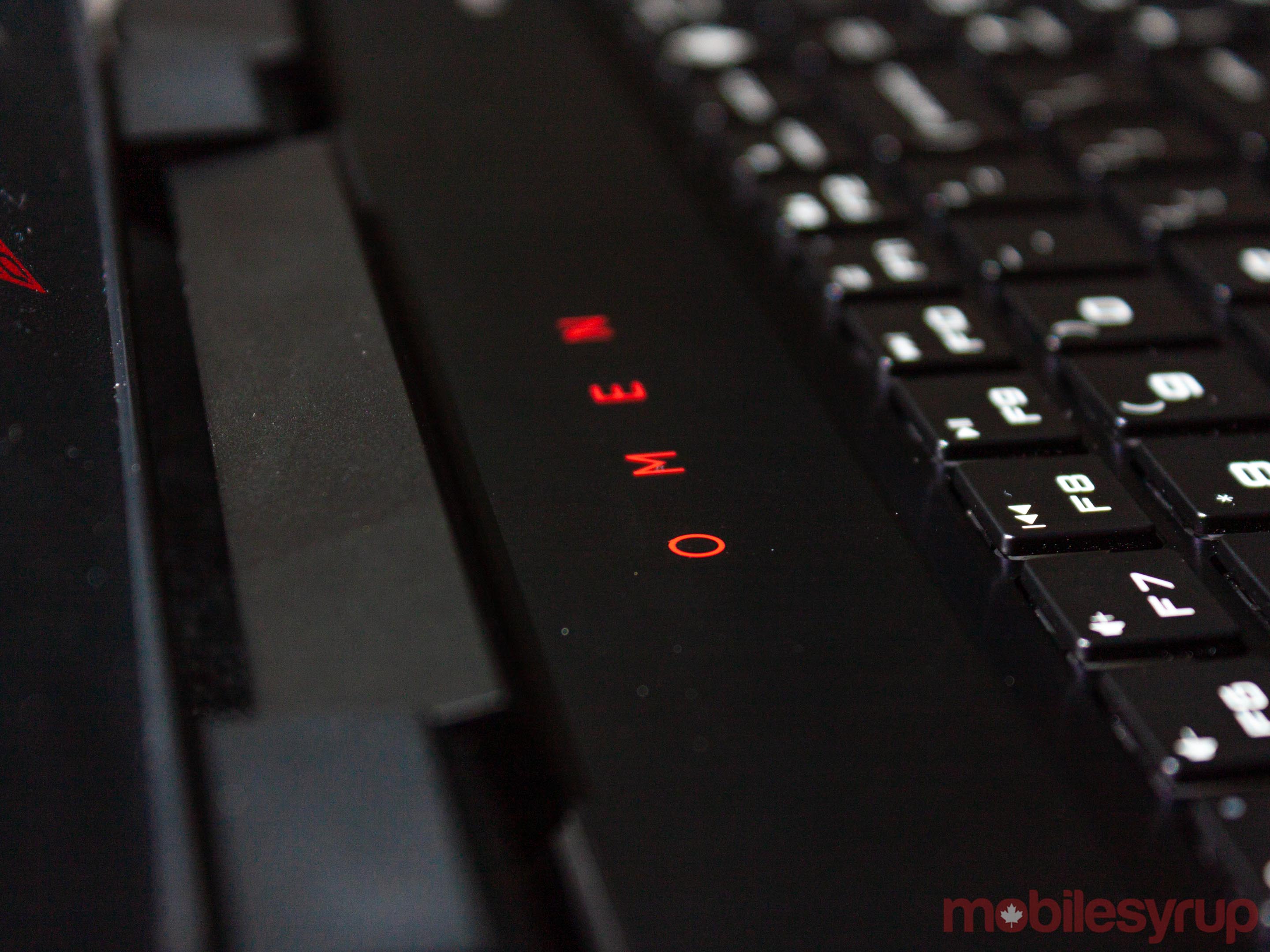 The keyboard was also fine. The multicoloured backlighting was a nice touch, but it’s a shame there’s no way to customize or tweak it beyond just turning it off.

As for the feel of the keys, again, things are fine. The keyboard isn’t anything to write home about: it’s clicky and responsive, and the keys have a respectable amount of travel if you like that (I do). It isn’t the best laptop keyboard I’ve used, but it certainly isn’t the worst. It performs well in gaming too, and I appreciated the specially marked ‘WASD’ keys to get my fingers in position with ease.

The keyboard also does a great job utilizing the space it has available. For one, HP squeezed a whole number pad onto the Omen, an absolute must-have on keyboards, in my opinion. Additionally, HP didn’t make many sacrifices to do it, like mushing the arrow keys into the awful split layout so many laptops rely on. That said, the arrow keys are smaller than typical keys, but not enough to affect using them significantly. 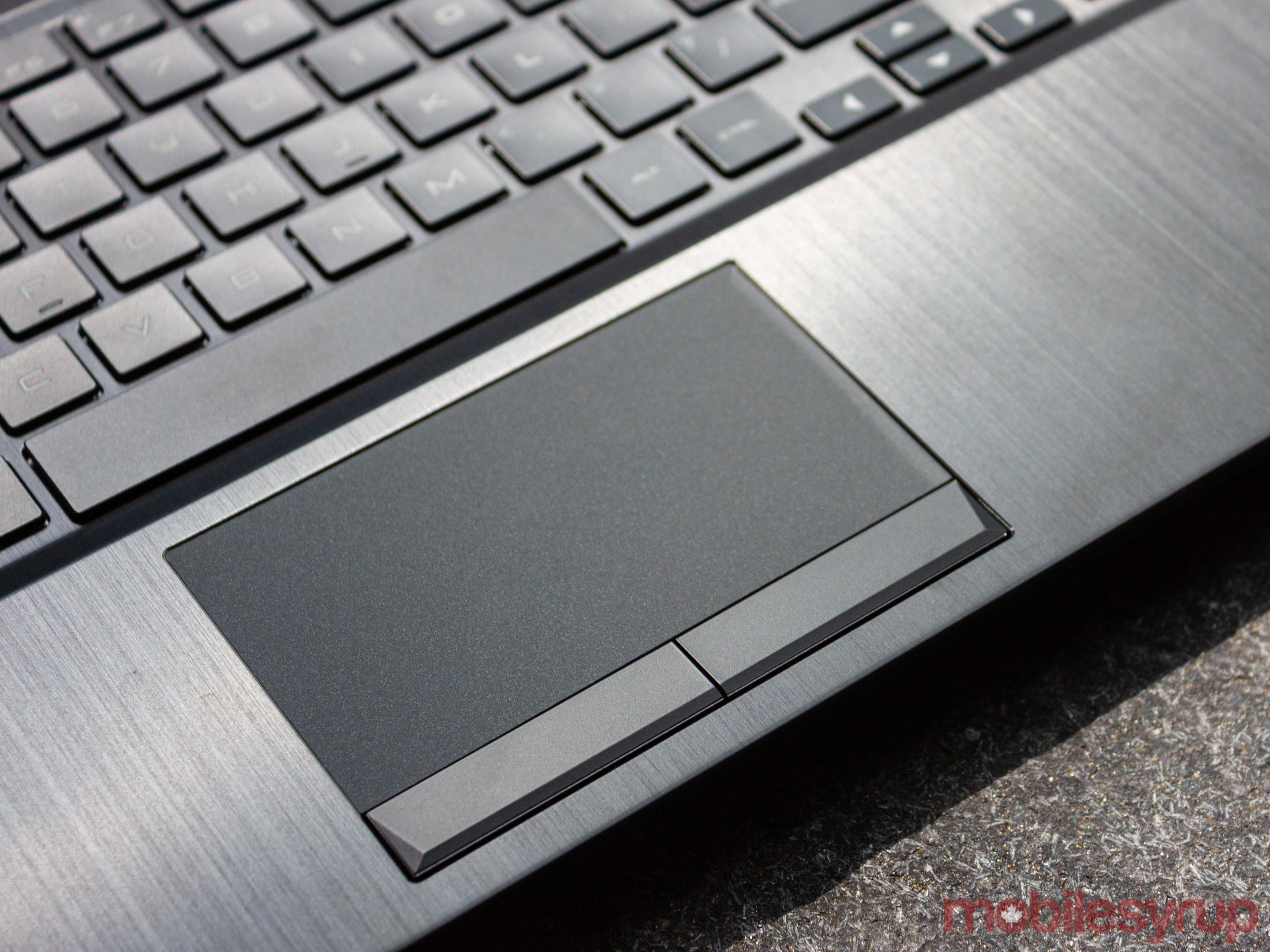 While the Omen’s keyboard will serve users well, the trackpad is another matter.

Using it felt like taking a trip back to the early 2000s, with the raised touch buttons, no tactile click when pressing the trackpad and it generally being way too small.

Maybe I was spoiled by the large, clicky trackpad on the HP Spectre x360, but the Omen’s touchpad is frankly not good enough for 2019.

Because of the size of the touchpad, you can’t scroll the cursor from one side of the screen to the other. I found I had to continually lift and place my finger to move the cursor around and over time it got very annoying. Plus, the lack of a click on the trackpad meant there was no tactile feedback unless you used the right and left-click buttons.

Ultimately, it’s not a big deal: most people don’t use a trackpad when gaming, regardless if it’s good or not. But, that also makes the Omen a less portable device, because you’ll need a mouse to use it efficiently. 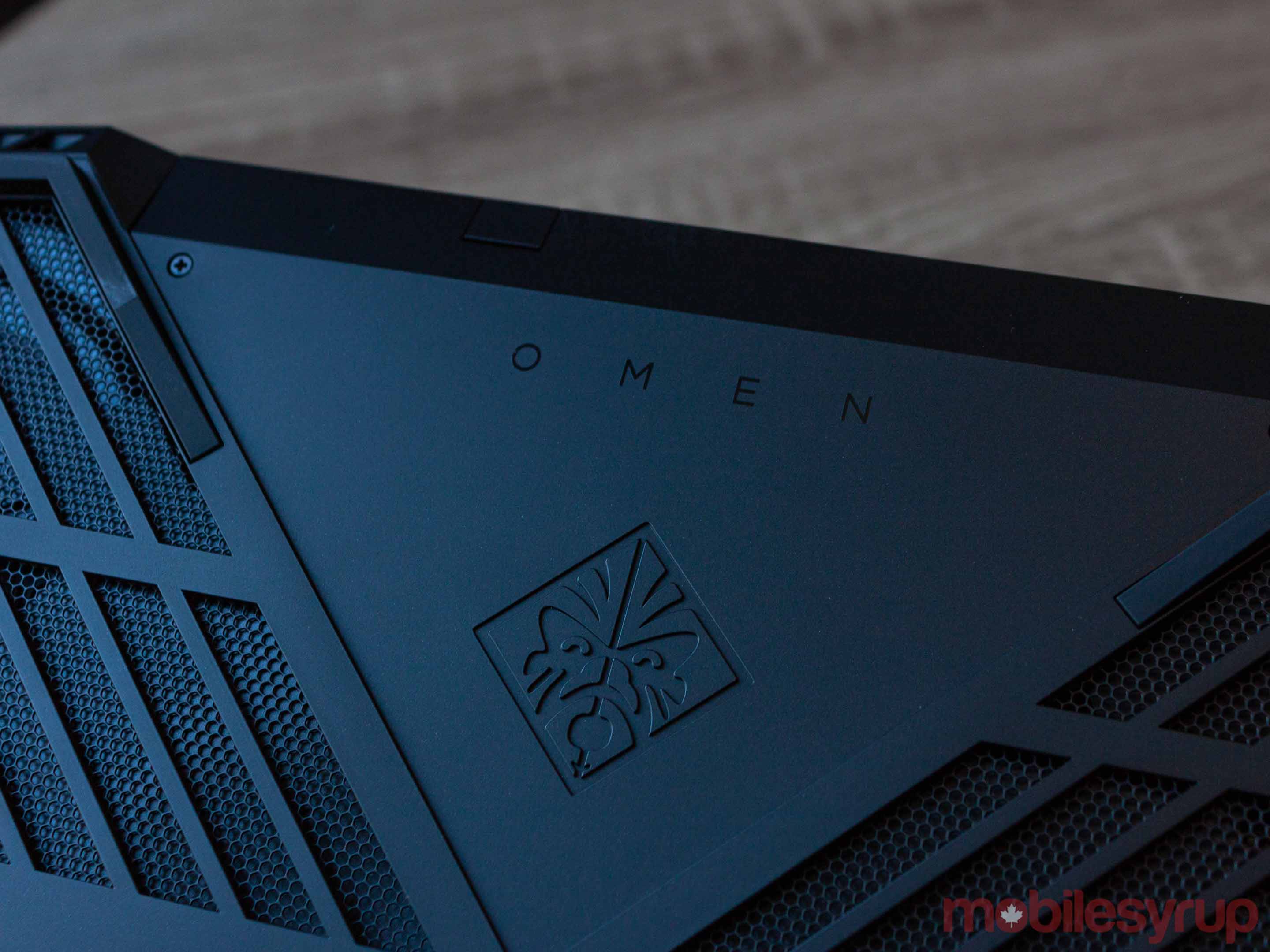 I can hardly write about a PC these days without taking a moment to talk about bloat.

So many manufacturers load up their computers with extra software that users often don’t want or don’t need — and removing it can be frustrating.

HP has gotten better in this regard, but it still follows this annoying trend, including several of its own apps. It does so redundantly, as many of the HP offerings provide similar feature sets, meaning one would do in place of four or more.

Plus, as with the HP Spectre x360 I recently reviewed, some of the extra software masquerades as necessary, even if it isn’t. HP includes several audio apps, for example, and it isn’t clear if users can safely delete any of them without messing up things like the Bang and Olufsen speakers. 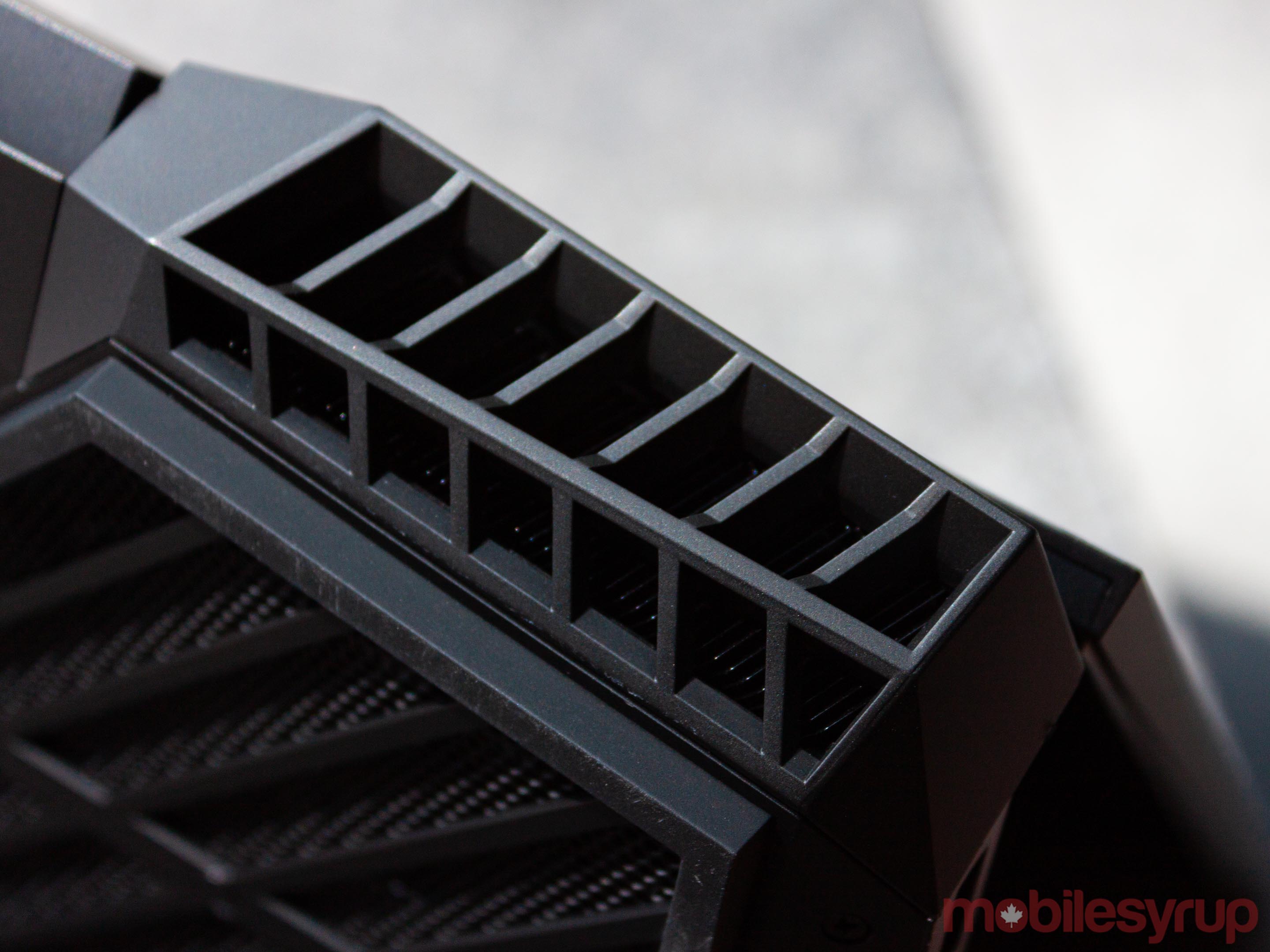 On that note, the speakers on the Omen are significantly better than those on the Spectre, so if that’s a concern for you, there’s nothing to worry about here.

Battery life, however, is not so great. HP says the Omen 15 can get up to four hours and 45 minutes, but in practice, I found it got even less. I unplugged it while I was downloading a game to test — nothing else was running on the laptop — and it lasted about three and a half hours before I had to plug it in again.

I’d imagine if you’re doing heavier lifting, such as playing a game, your mileage will be even worse. And the charging adapter is massive, so if you’re taking the computer and charger on the go with you, you’ll be doing the heavy lifting instead.

The Omen sacrifices portability for performance 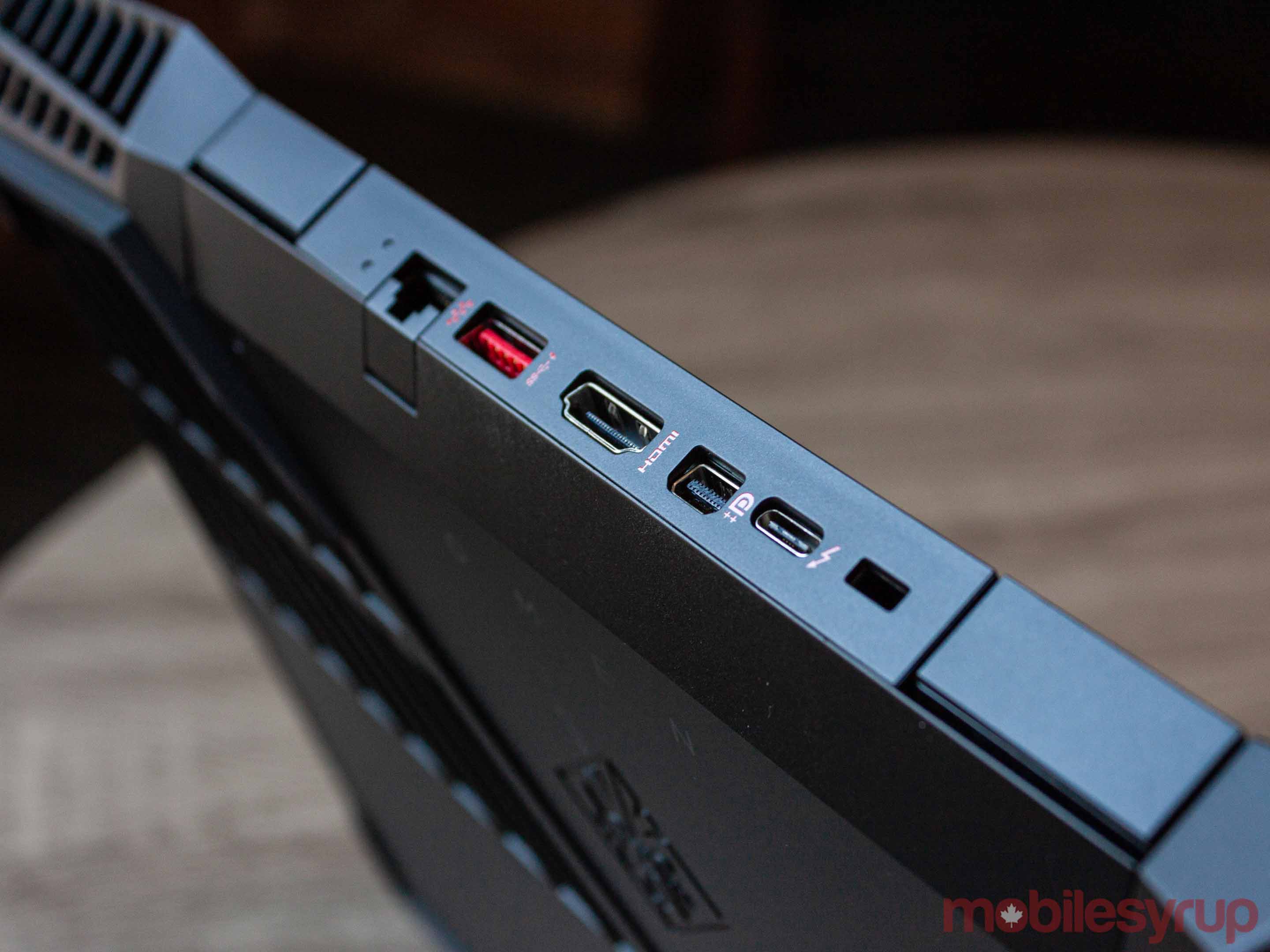 Ultimately, HP’s Omen 15 gaming laptop does what most gaming laptops do: it sacrifices portability for performance.

The problem with gaming laptops is that, at least in PCs, it’s hard to pack great performance into small spaces. That’s not to say it’s impossible, but it’s definitely difficult. Coupled with the other purposes a laptop needs to fulfill — battery life, built-in keyboard, track pad and screen — it makes the goal of creating a gaming device with all the right pieces a herculean task. Sacrifices have to be made.

Unfortunately, that’s why the HP Omen are massive, heavy computers loaded with fan systems to dissipate heat and allow it to run at a reasonable level of performance. On top of that, by packing things in tightly enough to fit the laptop form factor, it makes it hard to upgrade individual pieces. Yes, you can swap out the RAM sticks on the Omen, but your CPU and GPU will need an upgrade first. And you can’t swap those out. 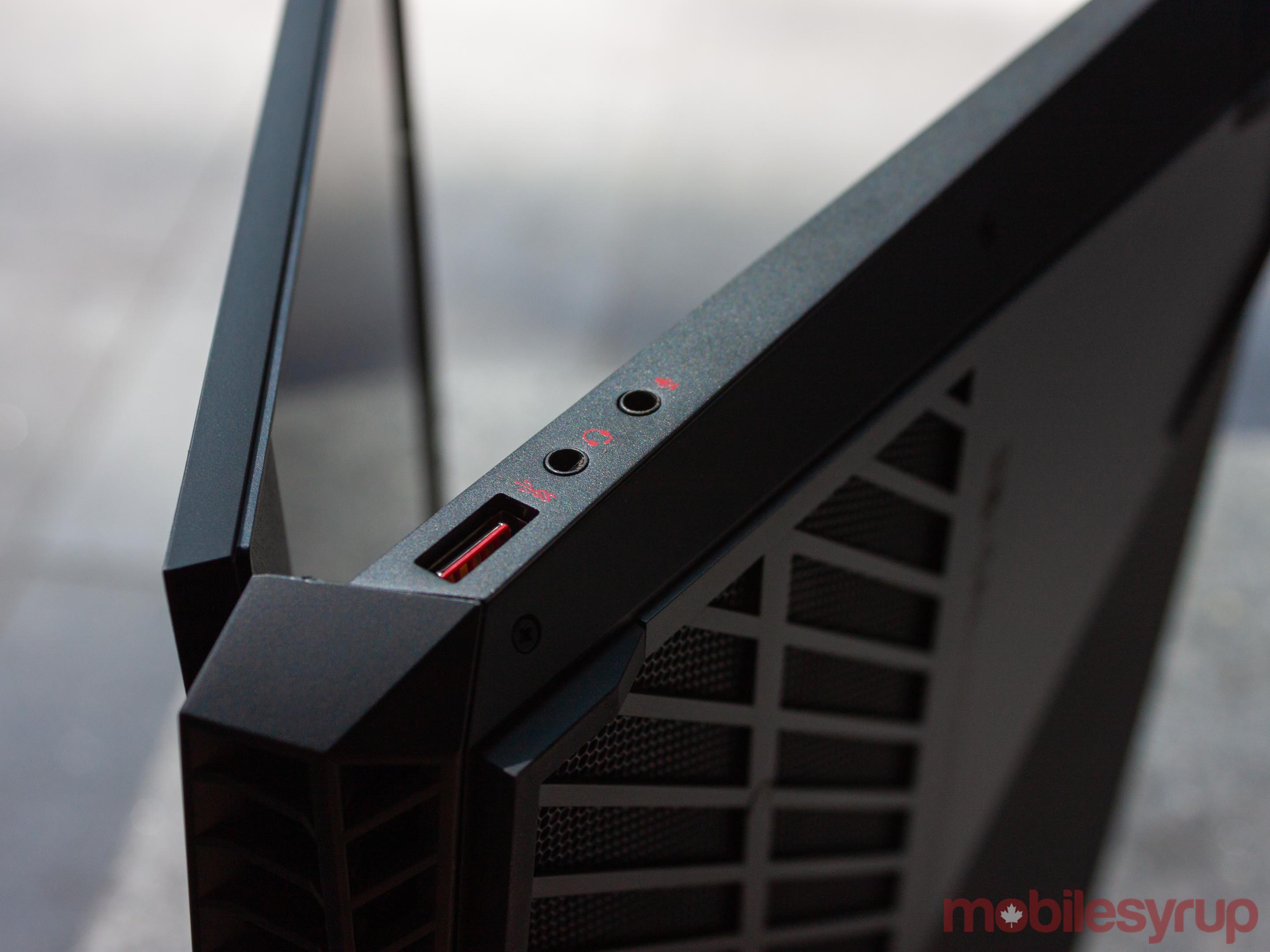 So, here’s the bottom line. The HP Omen 15 offers excellent gaming performance. It’ll cost you in the realm of $1,999.99 to $2,299.99, depending on the configuration. It’s semi-portable compared to most laptops (and highly portable when compared to desktops). If you were to build your own desktop with similar specs, you’d probably save around $500, if not more, on the price.

In other words, you’re looking at a $500 premium to be able to bring your gaming with you and play anywhere. The question then becomes if gaming on the go is your goal. If that’s what you want to do, then the HP Omen 15 is among the best gaming laptops you can buy. If you don’t want to game on the go, look elsewhere. There are plenty of high-performance, extremely portable laptops if you’re looking to do work, and a nearly infinite number of ways to build a custom PC for gaming. Or, you can buy a pre-built rig and still come out ahead.

Check out the HP Omen 15 here from HP Canada.