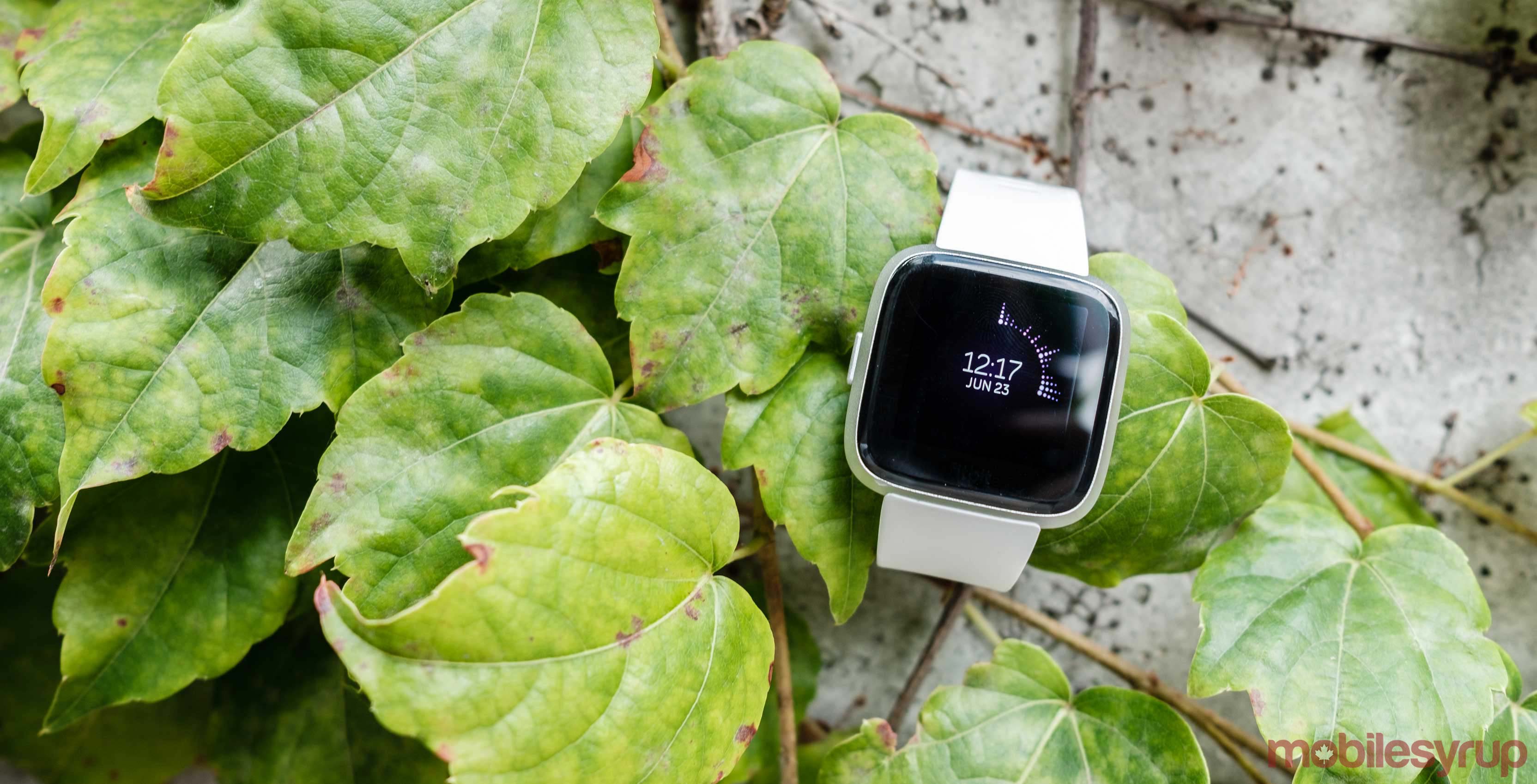 In 2018, Fitbit released the Versa, a wearable that took the best aspects of the company’s Ionic smartwatch and distilled it down to a more affordable and attractive package.

One year later, the company is back with the Versa Lite, a smartwatch that takes the core idea of the Versa further, cutting additional features in the pursuit of an even more affordable price.

What’s surprising is that Fitbit’s new wearable suffers little for including fewer features. In the case of the Versa Lite, more affordable does not necessarily mean worse. 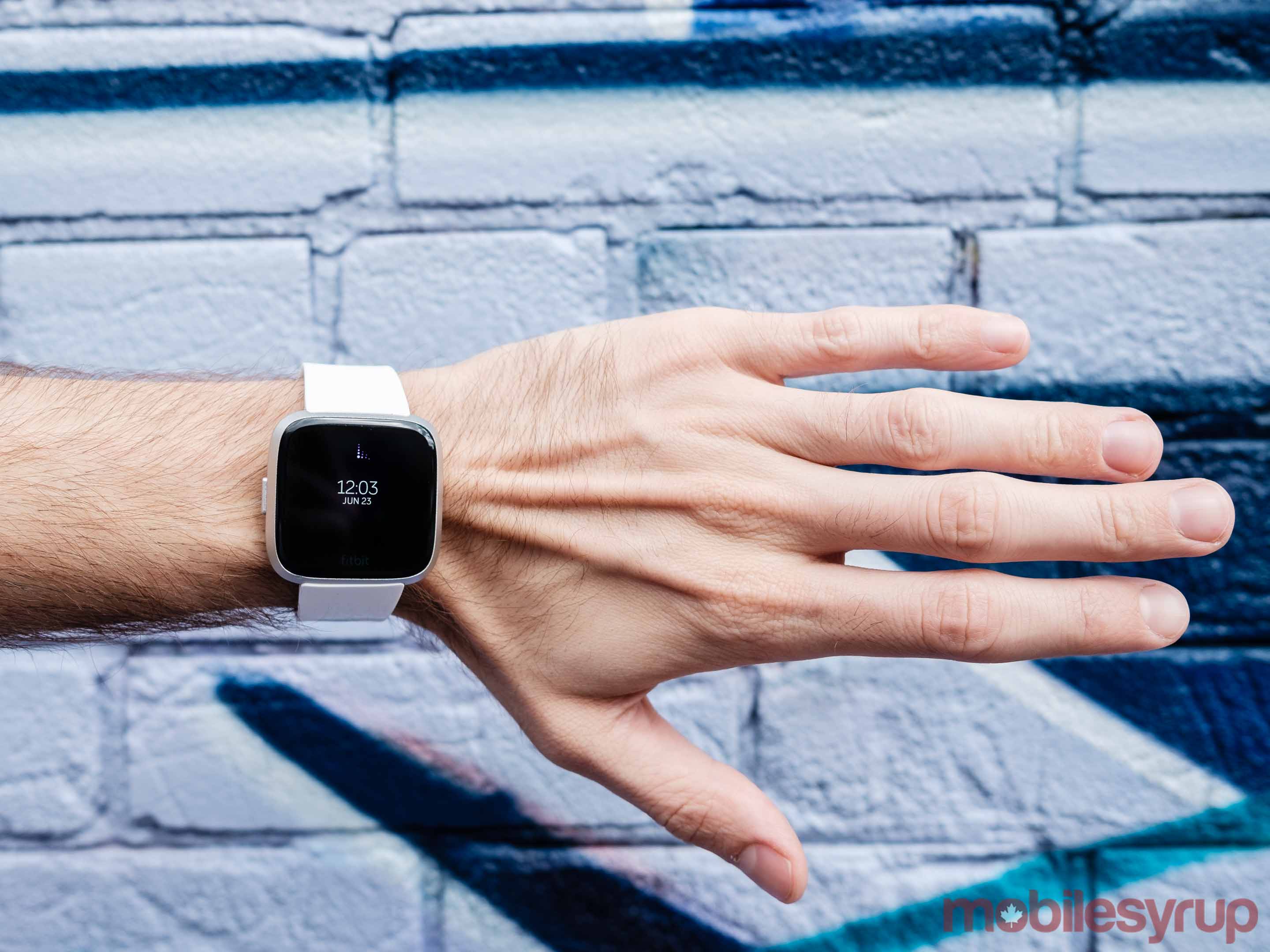 Put next to one another, the only suggestion that the Versa Lite is somehow a lesser device than the original Versa is the fact that it features one — instead of three — physical buttons.

At first, I was off put off by this change, but quickly came to realize it doesn’t significantly affect the experience, either positively or negatively, of navigating the Versa Lite’s interface.

The two extra buttons the Versa featured helped make jumping to specific elements of Fitbit OS, such as the exercise menu, faster. The Versa Lite’s touch interface is more than up to the task of making the interface easy to navigate, even if doing so is a touch slower.

Fewer buttons aside, the Versa Lite inherits all the other physical characteristics of the Versa, including its clasp mechanism.

Every time I’ve reviewed a Fitbit product, the company has sent me multiple bands to try with its newest tracker. With devices like Ionic and Charge 3, it was fun to switch between bands and experiment to see what style combinations I could dream up.

With the Versa, in contrast, due to difficult the clasp mechanism made it to change bands, I picked one and stuck with it even if it meant wearing the same silicone band consistently.

For both better and worse, Fitbit hasn’t updated or reworked the Versa Lite’s clasp mechanism. It’s still fussy as ever, making it a chore to switch between bands. However, with all the bands Fitbit has released since it first launched the Versa, the selection of available first-party bands is now truly expansive.

To start, Fitbit now has 12 different coloured silicone bands. The company also offers more expensive leather, polyester and stainless steel bands. What’s more, the Versa Lite is available in two attractive new colours called ‘Mulberry’ and ‘Marina Blue.’ For those who don’t mind putting up with the Versa Lite’s clasp mechanism, there’s essentially a band for every occasion. And clasp mechanism aside, the bands themselves are great. I’m particularly fond of the white and lilac silicone bands, but I also enjoyed the Horween leather bands. 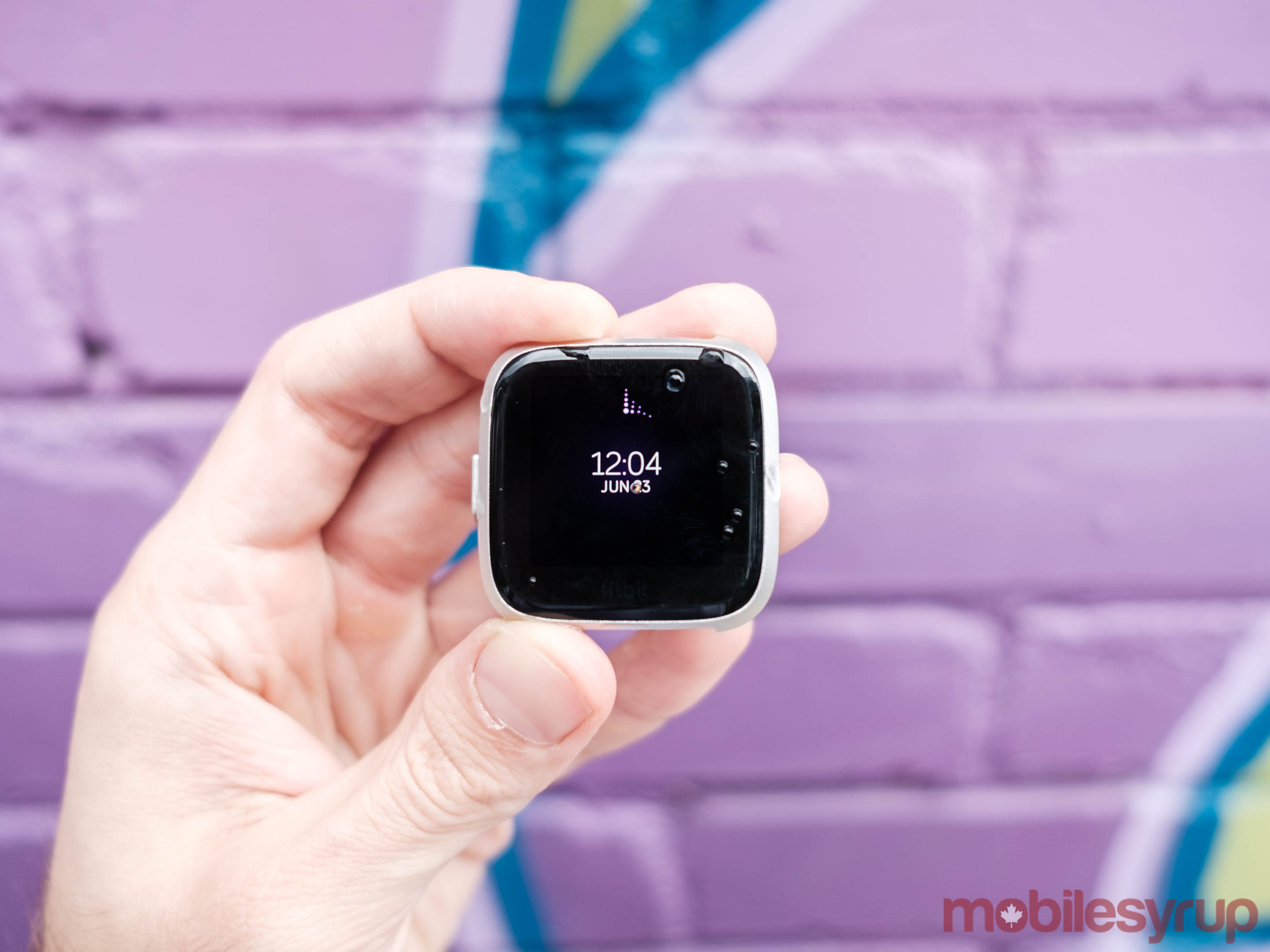 Internally, the differences between the Versa Lite and Versa are more pronounced and will determine whether you should buy one over the other.

Most notably, the Versa Lite isn’t capable of swim-tracking — though it’s still water-resistant up to a depth of 50m. It also doesn’t include an altimeter, which makes it incapable of tracking elevation. It’s also missing local music storage. And last but not least, the Versa Lite doesn’t include Fitbit Coach, which, on the company’s higher-end smartwatches, offers guided video workouts.

Of all the Versa features Fitbit removed to make the Versa Lite, the one I missed the most, if only because I climb the stairs to my 12th-floor condo every day, was the altimeter. The absence of swim tracking will make the Versa Lite a non-starter for some. For the most part, however, I think Fitbit cut features with a fine scalpel.

What’s more, Versa Lite still includes Fitbit’s PurePulse heart rate technology, which enables a host of high-end features, including accurate, all-day calorie burn tracking, guided meditation routines and advanced sleep tracking. In the year since Fitbit released the Versa, the company has polished the software underlying the Versa Lite’s heart rate tracking algorithm. As a result, it now feels more accurate, both when exercising and in regular day-to-day use. 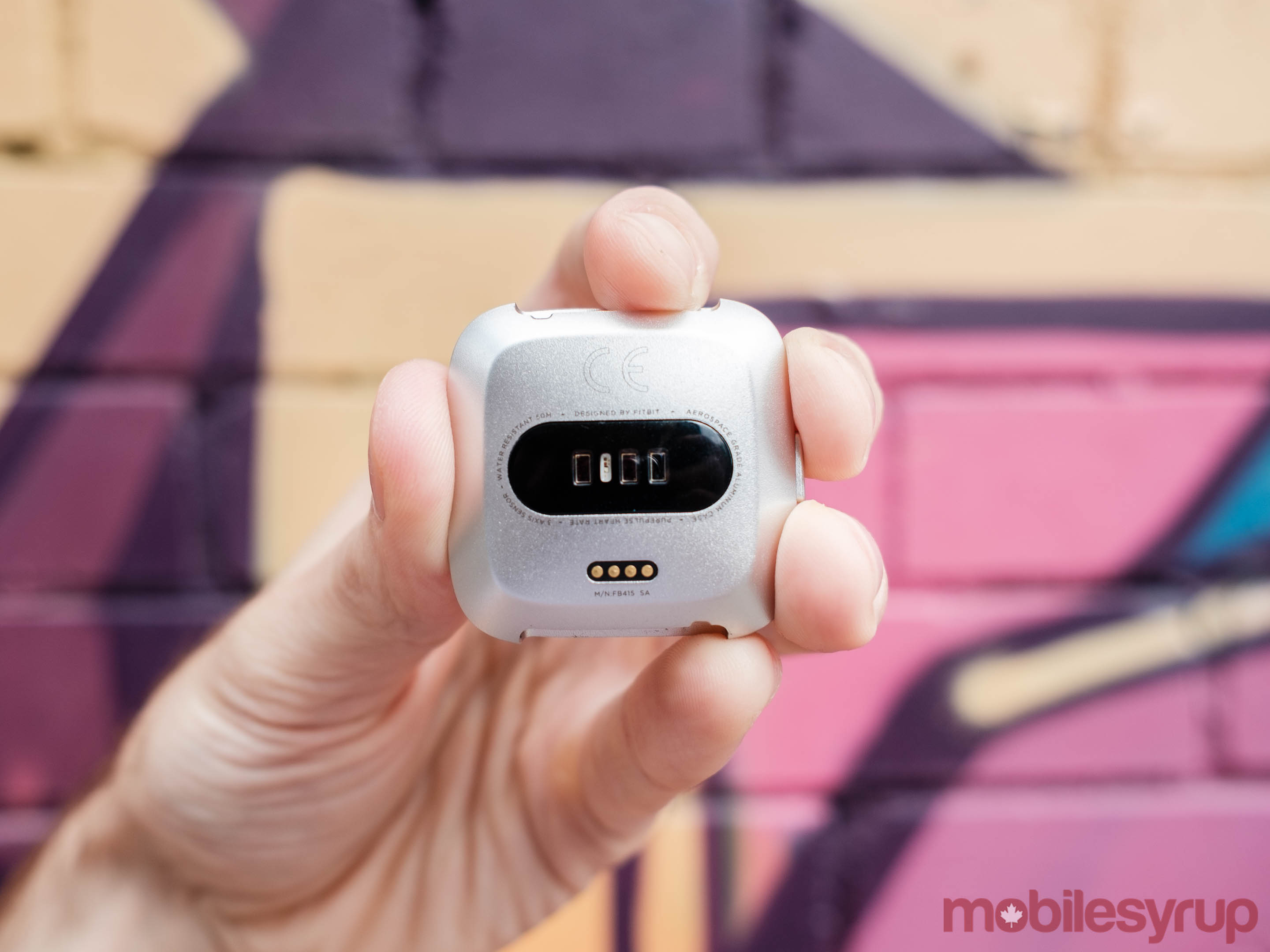 What hasn’t changed is battery life: both wearables promise four days of uptime, a promise the Versa Lite largely delivers on.

One aspect of the Versa lineup’s design I would like to see Fitbit change is how you go about charging the wearable. Like all of Fitbit’s products, the Versa Lite comes with a proprietary charger; it doesn’t support wireless charging. Even Apple, so fond of its walled gardens, specs out the Apple Watch with Qi support. Of course, the Versa Lite was never gonna be the device where Fitbit adopted more open standards, but it something that would elevate the company’s future products. 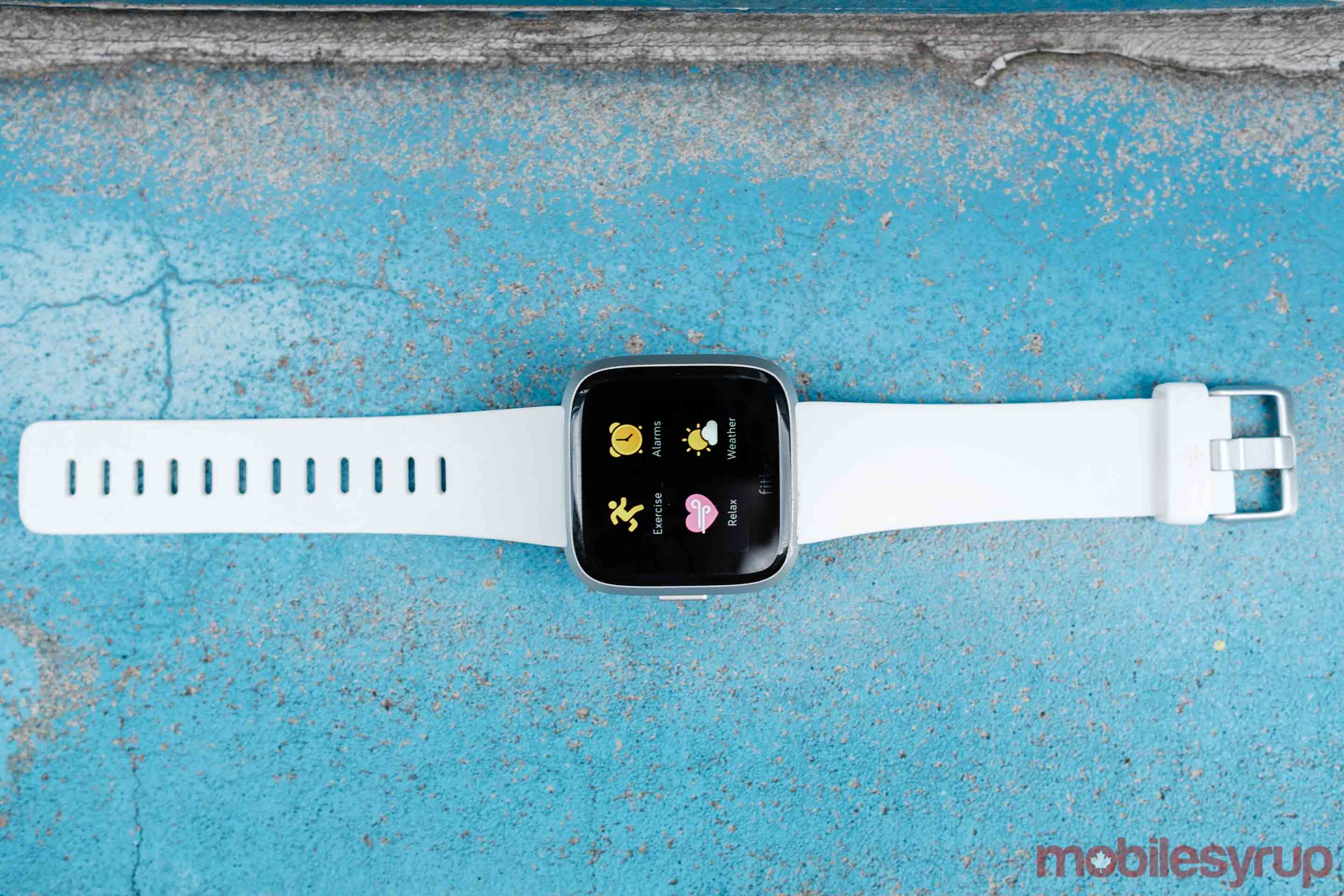 For better and worse, there isn’t a marquee new software feature that differentiates the Versa Lite from its predecessor.

That said, the wearable greatly benefits from the past year of development work Fitbit has invested into the platform. In conjunction with both Android and iOS, Versa Lite does a better job of displaying push notifications. As I’ve said in previous reviews of the Ionic and Versa, I don’t think Fitbit OS is a great option if notification management is a priority. However, as a health, fitness and wellness platform, it’s hard to beat the combination of features Fitbit offers through its newest smartwatch.

For example, Fitbit’s brand of sleep tracking, which automatically identifies and logs sleep stages, is one of the best I’ve tested. For those with a competitive streak, Fitbit’s social features continue to be one of the major selling points of the platform.

One feature Fitbit added shortly after it launched Versa Lite is support for Bitmoji. If you taken the time to create a Bitmoji, you can use it as part of your watch face and it will try its best to motivate you through a workout.

From a fitness perspective, the only instance in which I wouldn’t recommend a Fitbit tracker is if strength training is a priority.

As I mentioned last year, one of my ongoing disappointments with Fitbit’s trackers is that they treat weightlifting like a cardio activity. For what it’s worth, I’ve spoken to a Fitbit spokesperson about this and I now have a better appreciation of why the company has yet to add more robust weightlifting functionality.

Essentially, Fitbit’s slow movement here, comes down to the fact that it’s tricky to accurately and consistently track weightlifting moments. It wouldn’t be so bad if the Versa Lite were a more capable multitasker. Unfortunately, it’s not possible to switch the watch over to a dedicated sports tracking mode and to start, for instance, a timer at the same time.

Another annoyance is that Fitbit doesn’t allow users to share their data with other apps such as Google Fit, nor, for that matter, a variety of other platforms like MyFitness Pal.

None of these are major issues; they’re more so things that have dampened my enjoyment of the platform.

The Versa Lite isn’t going to sell anyone who wasn’t already sold on Fitbit’s new smartwatches on the company’s vision. What it will do, however, is make the company’s ecosystem more accessible, which is I think an applaudable outcome in itself.

As I mention above, there’s a lot to like about Fitbit’s ecosystem, especially if cardio is a major component of your weekly workout routine.

At $200 CAD, the same price as the Charge 3, the Versa Lite is a great option for those who were interested in the Versa and Ionic but felt they were still a bit too expensive for the features offered.

"At $200 CAD, the same price as the Charge 3, the Versa Lite is a great option for those who were interested in the Versa and Ionic but felt they were still a bit too expensive for the features offered."