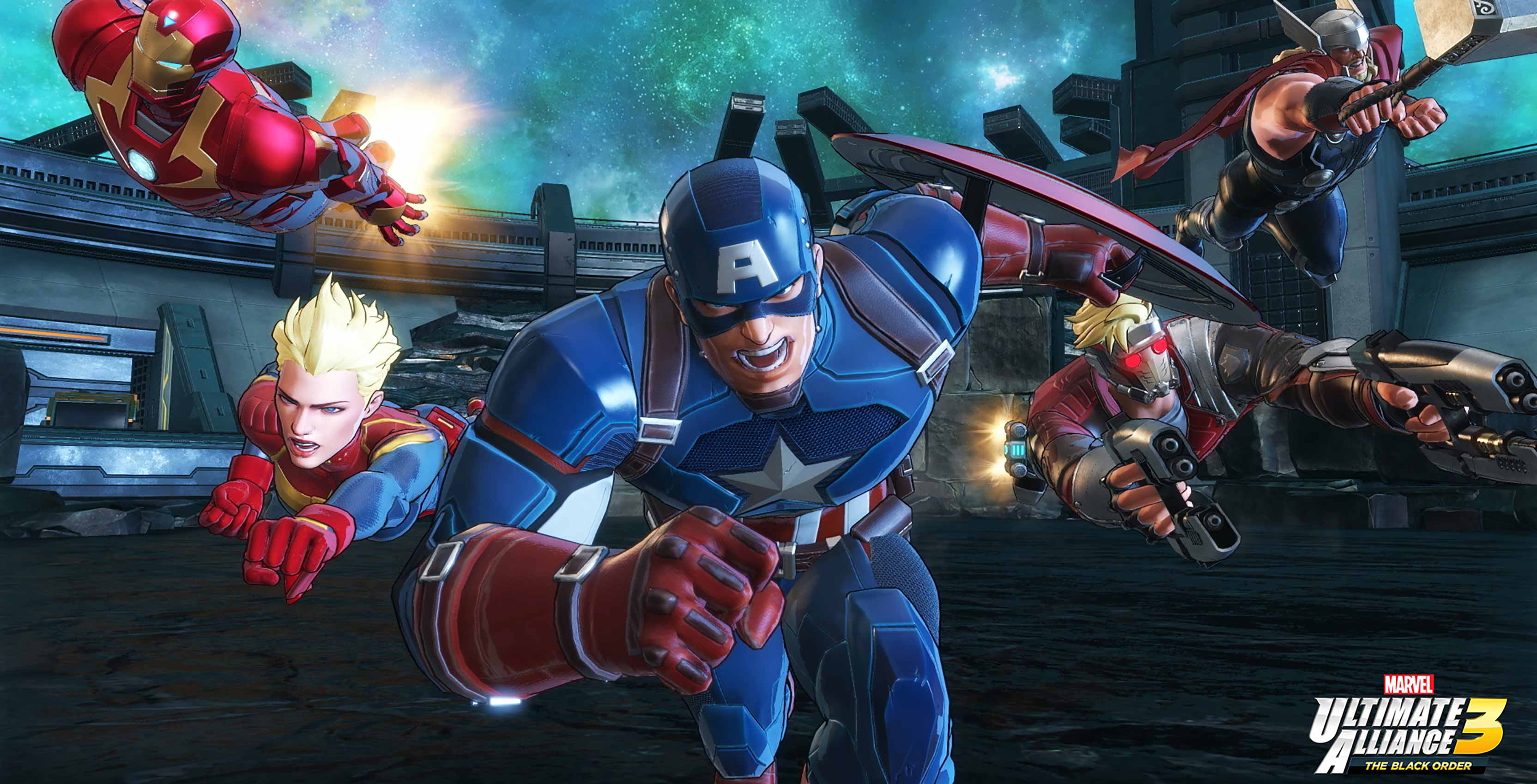 One of Nintendo’s biggest surprises last year came when the Japanese gaming giant revealed it would be publishing a new game in the well-received Marvel Ultimate Alliance action-RPG franchise.

The first two Marvel Ultimate Alliance games came out in 2006 and 2009, respectively, and were on virtually every platform at the time, not just Nintendo systems. That’s why a third entry in the series coming exclusively to the Nintendo Switch — 10 years after its predecessor, no less — was so unexpected.

The new game, officially titled Marvel Ultimate Alliance 3: The Black Order, is being developed by Team Ninja, the makers of the Ninja Gaiden and Dead or Alive franchises. Ultimate Alliance 3 features an ensemble cast made up of the likes of The Avengers, X-Men, Guardians of the Galaxy and Spider-Man, who must all unite to save the universe from Thanos and his Black Order.

Question: How did this project come together? How did Nintendo and Team Ninja come on board?

Jones: At Marvel, we’ve been trying to kind of rebuild the Marvel brand in gaming and work with best in class game partners to really bring great Marvel games to the world. And every time our team would go to [San Diego] Comic-Con, fans would come up and ask ‘when are you going to bring back Ultimate Alliance?’

We know that it’s a beloved franchise and there are a lot of fans out there. But we knew after 10 years that just doing a sequel wasn’t going to be enough. It needed to be special and unexpected. A few years ago, we had a meeting with Nintendo. Early on, they didn’t have a working Switch. It was like like a 3D printed plastic version of a Switch and they walked us through their vision for the platform. 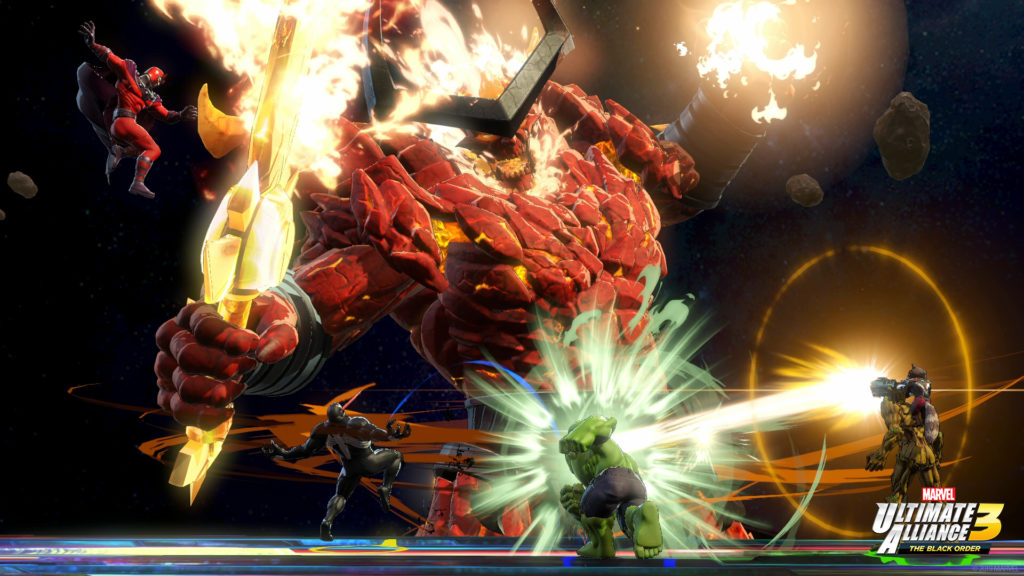 And we said, ‘this is what’s next for Ultimate Alliance because it’s perfect — however you want, build your dream team on the go while on a Marvel adventure.’ But then the question remained of who’s going to develop it. We’re actually huge fans of Hayashi-san and Team Ninja. I love Nioh and all their old games. We’d been looking for a way to work together for quite a while. They also have a great relationship with Nintendo [since] they’ve done a number of games for them.

It just became this perfect fit: they wanted to work on Marvel, we’re huge fans of them, Nintendo had this great platform opportunity, and Team Ninja was excited about what they could bring to Ultimate Alliance — that Team Ninja DNA and action gameplay and really kind of ramp up the superhero feel of the game. It really was this ‘stars aligning’ sort of moment.

Q: Once you decided on all of this, how did you settle on what the story would be? Specifically, how did the massive success of the Marvel films over the past 10 years influence the approach to this game?

Sumerak: [Marvel] is a much bigger universe now than it ever was with so many characters that fans love, so it was a real challenge to find a way to bring all these characters from all these different families — the Avengers, X-Men, Guardians of the Galaxy, Defenders, Inhumans — together into one story. It was about finding a way to bring them all together for the right reasons — in terms of the villains they needed to face and the cosmic threat that was approaching — and give each of these special characters a moment to shine. 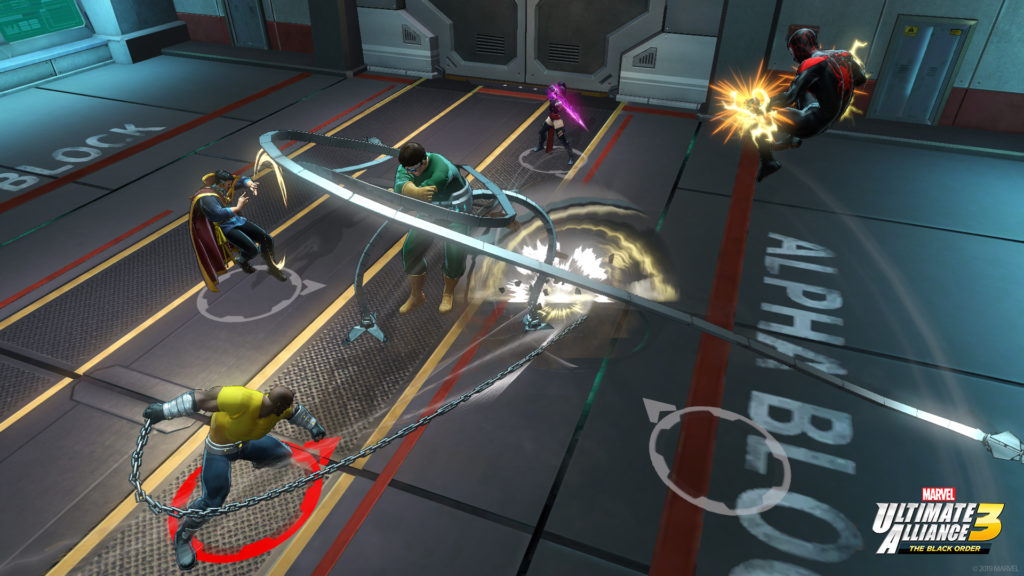 We never want one of the characters in the game to feel like they’re less important than the others. If you’ve got a favourite character in this roster of 30-plus characters, we want you to know that they’re part of the story as well. We want them all to have their own unique voices and their own unique moments in the story.

Were there any specific stories from the comics, movies, TV and the like that inspired Ultimate Alliance 3, either from a narrative or gameplay perspective?

Sumerak: It’s the wealth of the Marvel Universe that I think is important for a game like Marvel Ultimate Alliance. Because we’re exploring so many locations and meeting so many different villains and heroes, it’s more about just immersing yourself in the [whole] Marvel Universe.

I could point to things like [Spider-Man:] Into the Spider-Verse as inspirations for Miles and Gwen in this game, but I also look to the comics for their appearances. When Thanos is a major part of the game with the Black Order, of course you’re going to think of Avengers: Infinity War and Avengers: Endgame, but I also go back to 1991 and I think about the original Infinity Gauntlet event and I go back further than that and I think of old [Adam] Warlock comics.

It’s the depth and scope of the Marvel Universe as a whole that really comes to the surface here and, hopefully, is infused within the story of the game. 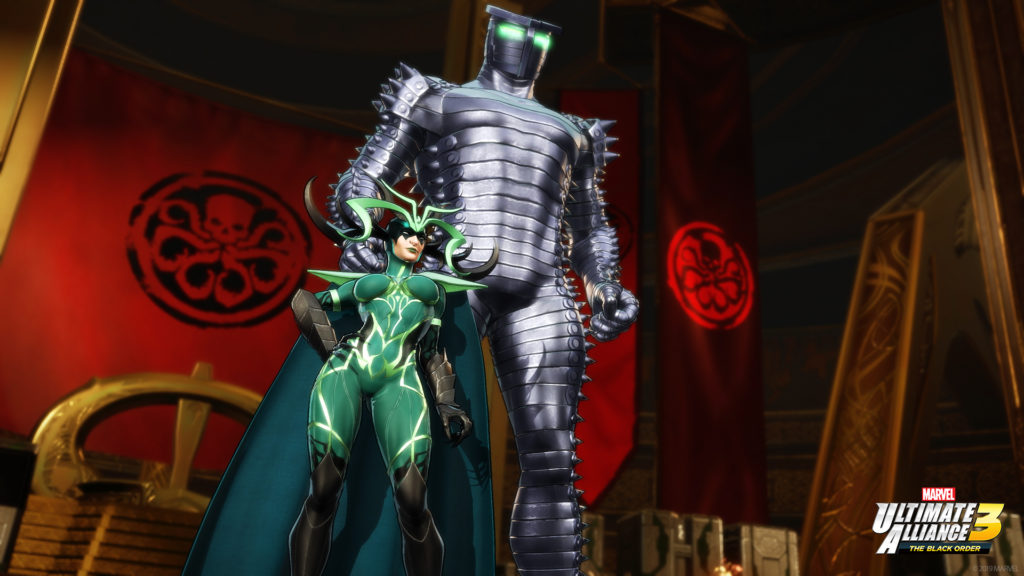 Q: On that note, what does the process look like when you’re deciding on which characters to include in the game? Since this is such a collaborative effort and [Sumerak] and Team Ninja must each have their own favourite characters, how do you come to a consensus on who ultimately makes it in?

Jones: It’s like music and lyrics — how do you write a song? You write the poetry first, you write the rhythm, the beat, the melody… there’s a little bit of all the above. Sometimes we say, ‘hey, this character would be a really cool surprise in the story,’ or ‘we think we can make the gameplay of this character super cool and our team is really excited about [him].’

From a Marvel standpoint, from an Ultimate Alliance standpoint, we want the game to feel like you have all your favourite characters there. We wanted to make sure we had coverage across all the different types of characters — supernatural characters, younger characters, cosmic characters and mutants, as well as characters that Team Ninja really felt they could bring to life from a gameplay perspective.

[In terms of work], that means lots of iteration, discussion, whiteboard sessions, documents [….] I can’t overstate enough the amount of effort and iteration that Hayashi-san and the team and Mark went through to get the voices right, the character designs right, the cinematics right, to bring all of it to life and make you feel like you’re going on an adventure in the Marvel universe.

Q: Team Ninja is largely known for over-the-top action games that are based on original gaming properties. What was it like to work on a license as big as Marvel?

Hayashi [speaking through a translator]: When we started working on this game, we thought we wanted to bring feel-good action to the gameplay — that was kind of our priority. But Marvel let us know that they really wanted us to bring out the specific character traits of these various heroes. 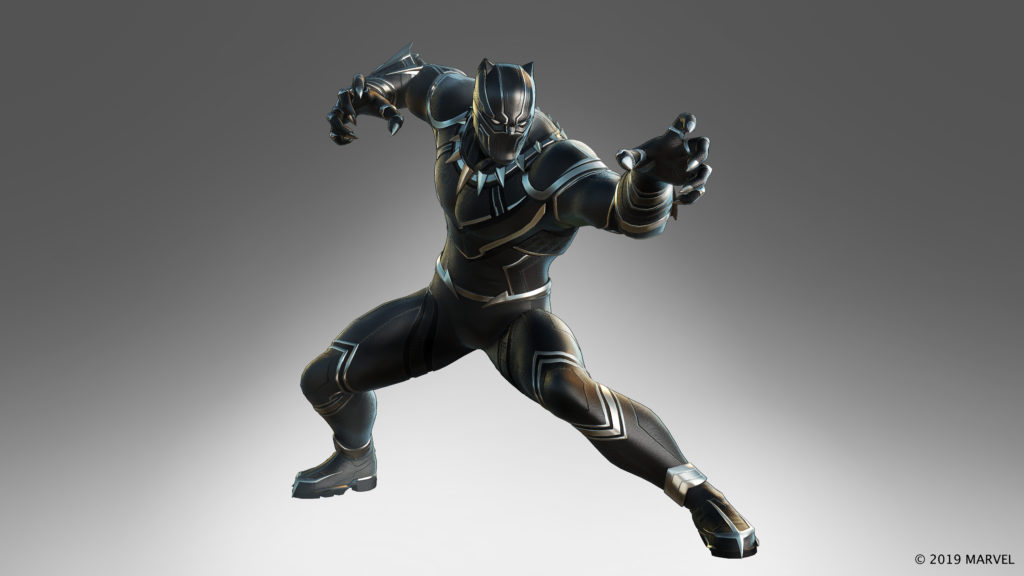 Just to bring up one situation, when Black Panther came out, we saw that they really highlighted a lot of the powers that his suit had. We figured that this is something that fans are going to want to see when they play as him and that’s something we brushed up.

Partway through the project, we did really think about the various character traits that fans would be looking forward to, and after we brought that out, we made sure it was feel-good action for all of these characters.

Q: What are some of the ways Team Ninja tried to bring its own style of games to the characters and the gameplay?

Hayashi: When Mike and Nintendo came to us with this proposal, we definitely played a lot of the Ultimate Alliance games to get our grounding right. These games have a really rich story and lots of interesting characters, so what we thought we could bring to the table was really great action.

We wanted to kind of change some of the elements of the [other games’] action gameplay. This meant working on various characteristics of each of the playable characters and really highlighting certain aspects in the gameplay.

For example, Iron Man is always flying, Wolverine has his healing factor, Hulk doesn’t get knocked back, Black Widow kind of attacks from a distance — that kind of thing. And we just wanted to bring out each of those characteristics in gameplay and make sure that was highlighted. 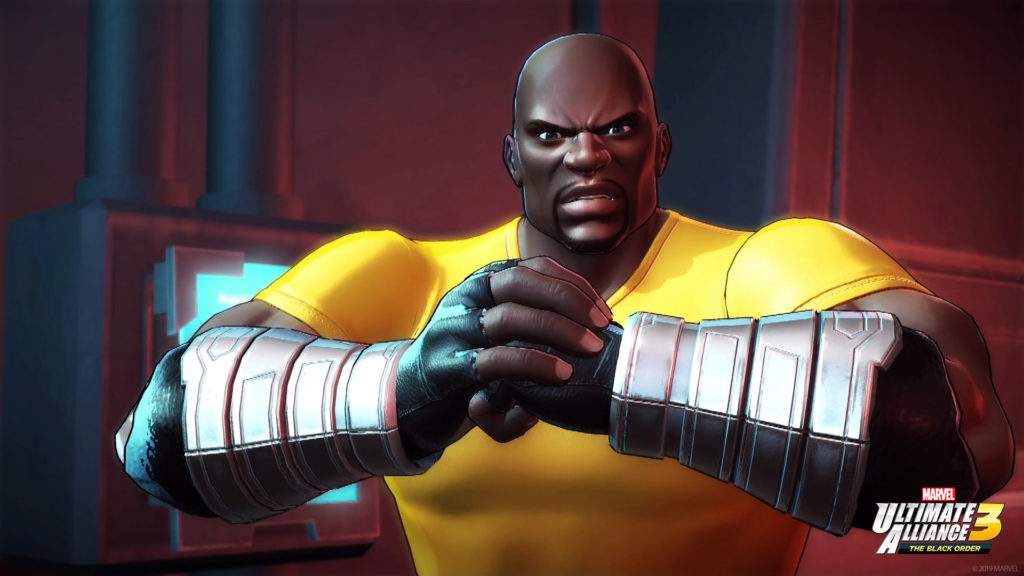 So you actually start thinking about those things as you’re building a team, like ‘I’m trying to stun a boss, it’s good to have Captain Marvel, but when I want to just do full-on damage, it’s good to have Wolverine.’ Or if I need a character who’s going to stand in the middle of a huge group, it’s good to have Hulk, since he’s not going to get interrupted — he’s got armor.

Marvel Games’ approach in the last several years has been to get involved in all kinds of different games [from Marvel’s Spider-Man with Sony to Guardians of the Galaxy with Telltale]. What are some of the challenges in balancing all of this and making sure there’s no overlap in, say, Ultimate Alliance 3 versus what Square Enix is doing with Marvel’s Avengers?

To speak broadly, Marvel Games is a multiverse — all of the games exist and we want [developers] to create their own universe and their own original stories and not be encumbered by other mediums or what other games may be doing.

That’s the goal — to understand what their vision is and help them make the best possible version of that. When writing an original story and doing an original take on you on characters, it’s similar to the comics — having different writers and creators come in and do their take on the X-Men, or the Defenders, or whatever it might be. 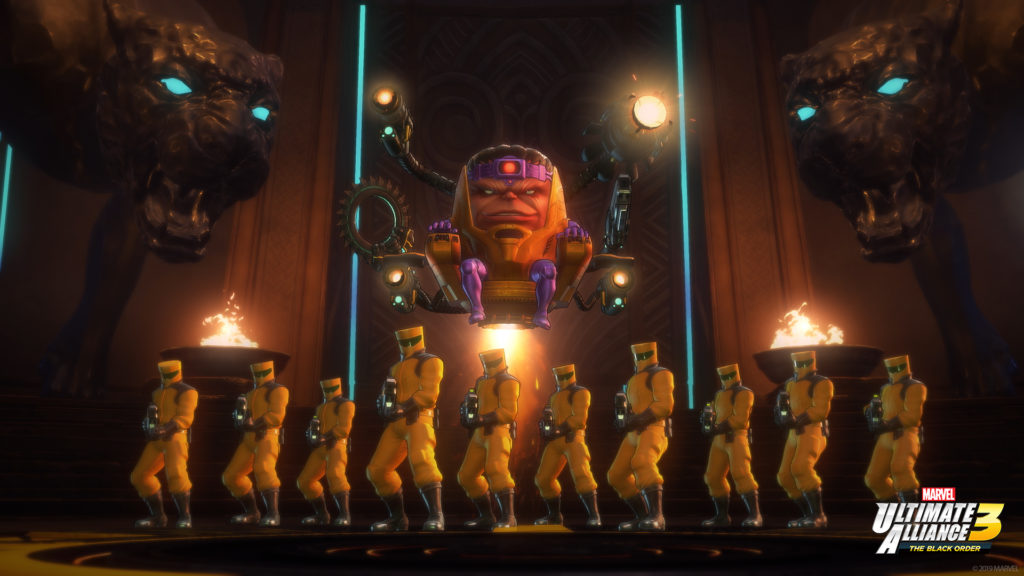 That’s the fun of the Marvel Universe. It’s not just one universe and one creator. We have the freedom to have all these kind of great different takes and in the case of Ultimate Alliance, specifically, to put them all in one place.

Marvel Ultimate Alliance 3: The Black Order will launch on the Nintendo Switch on July 19th, 2019.