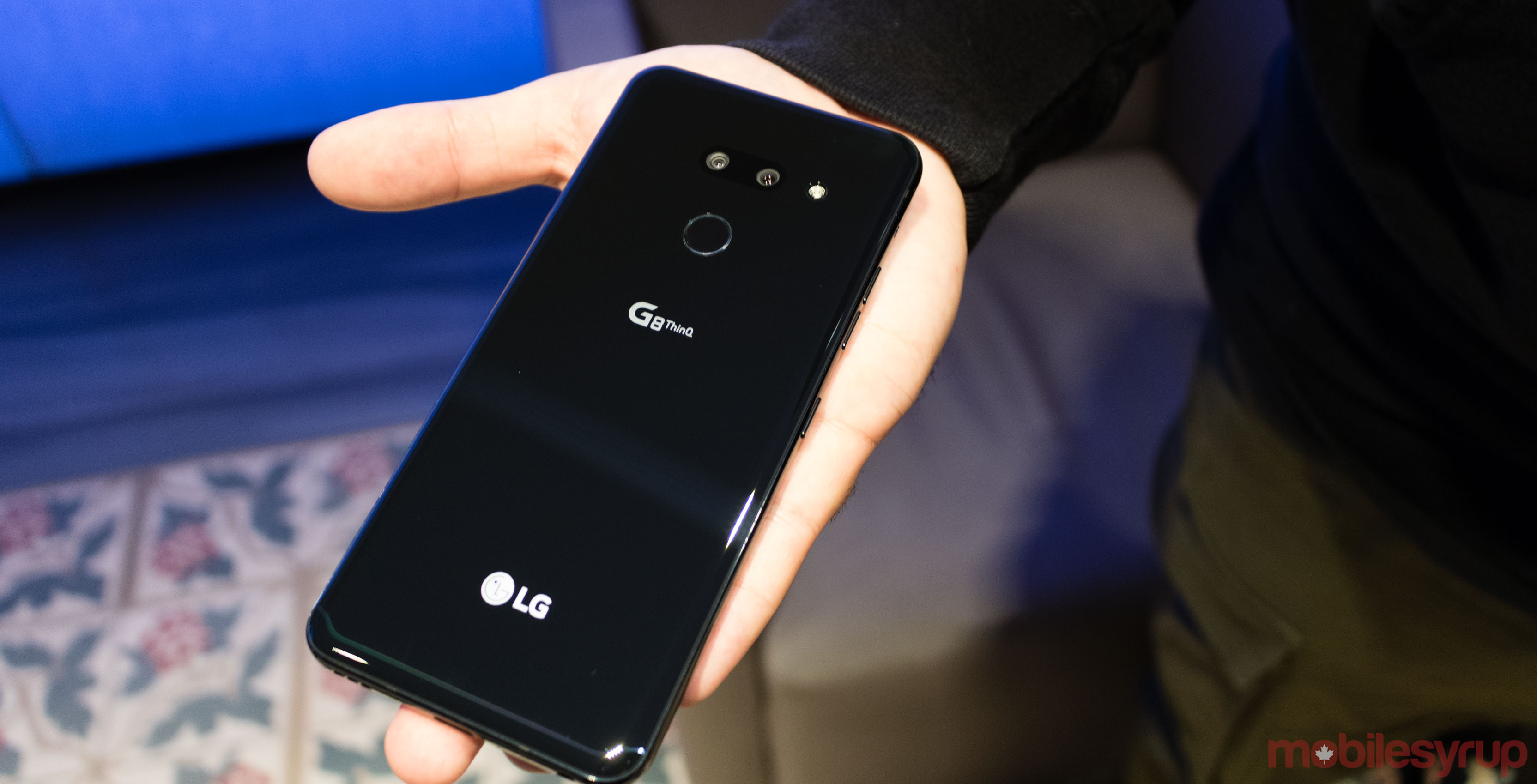 South Korean electronics giant LG has revealed its newest G-series smartphone, the G8 ThinQ, and while from a design perspective it doesn’t stray too far from its predecessor, the handset brings a variety of new features to the table.

I went hands-on with the G8 ThinQ in Barcelona, Spain, and even though the phone doesn’t sport a foldable screen, dual displays or a hole punch cutout, I was still quite impressed with LG’s latest offering.

It’s important to note that the G8 ThinQ I demoed wasn’t a final version of the phone, according to LG. 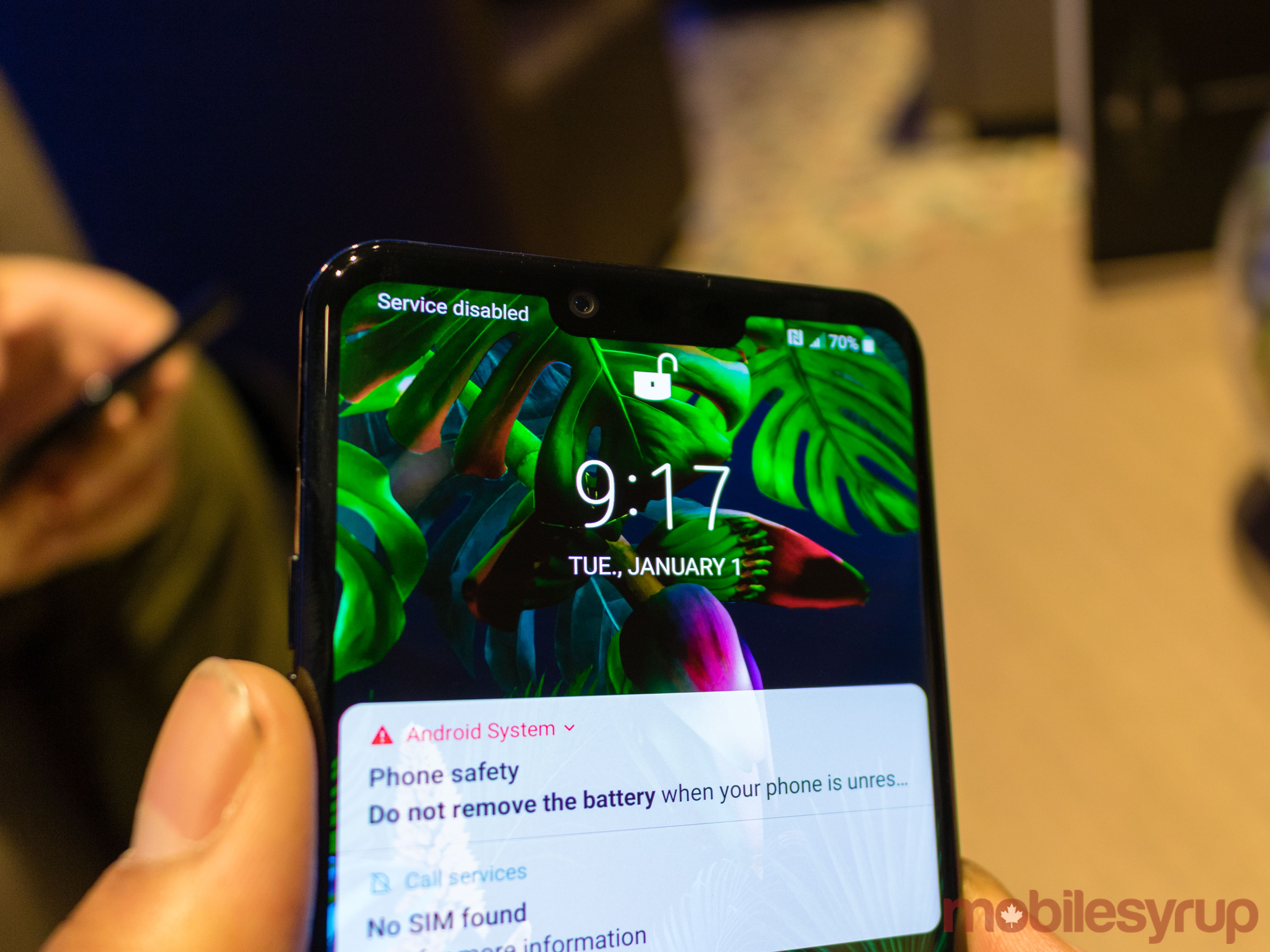 Starting with the phone’s flashiest hardware, the LG G8 ThinQ sports a time-of-flight (ToF) sensor that sends infrared waves out from the handset’s iPhone X-style notch towards a subject.

The ToF sensor helps the G8 ThinQ surpass Android’s built-in facial recognition capabilities. In my time with the device, the feature worked better than expected.

Once I added my face, the ToF was speedy and worked similarly to devices like the Huawei Mate 20 Pro and iPhone XS Max, two smartphones that both utilize more advanced facial recognition. The sensor should even allow users to unlock their phones in the dark.

As for bokeh selfies, during my brief time with the phone I didn’t get the chance to snap any photos. I’ll test out the selfie camera and compare it with handsets such as the Google Pixel 3 XL and the iPhone XS, two smartphones that I consider to be ‘selfie champions,’ when I get my hands on a review device. 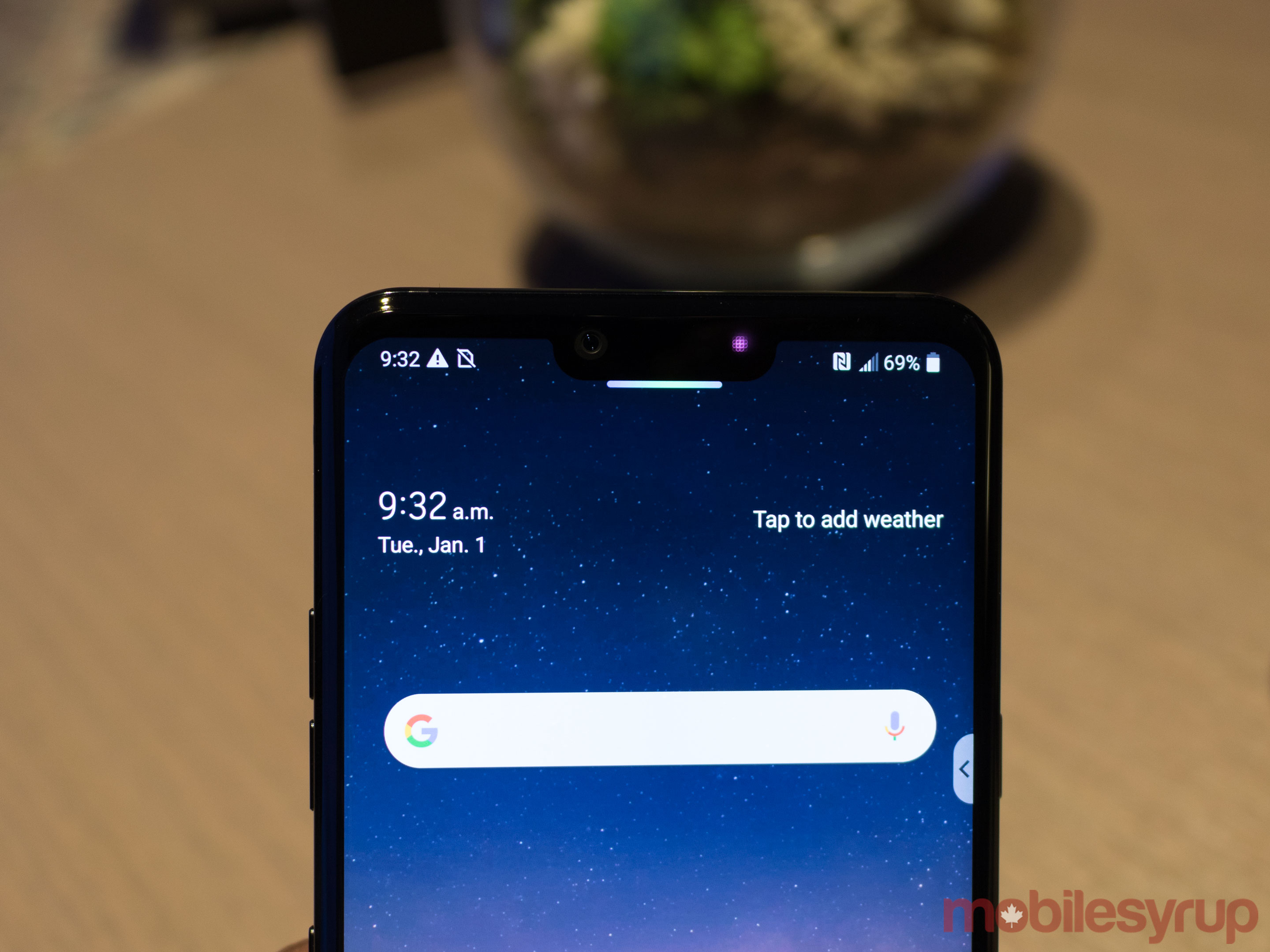 ‘Air Motion,’ on the other hand, is functionality that I tried out quite a few times during my time with the phone. Air Motion is a new feature that allows users to open apps and perform certain in-app actions without touching the phone.

Users can simply turn the gesture feature on, and then raise their hand above the device’s front-facing camera — this seemed to work best while the handset was lying flat on a table. Raising my hand above the camera opened up a mini app launcher, allowing me to swipe right for one app and left for the other. In the demo, swiping right opened ‘Spotify,’ and then raising my hand over the camera again, I could choose to start music playback.

LG says with the final product users will be able to adjust volume without touching the device.

While an odd feature, LG says this is helpful when you’re using your hands to cook or when driving, and that it even works with gloves on. This means it’s specifically useful in Canadian winters when users don’t want to remove their gloves to interact with the device.

The final product will also allow users to answer their phone using Air Motion. In this instance, the phone will switch to loudspeaker automatically.

I thought the feature was impressive, though it’s difficult to say how often I’d use it. It’ll be a functionality I’ll try out extensively during my full review.

Hand ID is a new way to unlock your device that LG says provides twice as much as security as a fingerprint sensor. To use the feature, users need to scan their palm with the ToF sensor.

This process took me a few minutes as it was difficult to figure out exactly where the phone wanted me to position my hand. However, I faced a similar issue with Huawei’s in-display fingerprint sensor technology when first setting that up as well. After setting up the functionality, I was able to unlock the device by placing my hand about 22.8 centimetres (roughly nine inches) above the front-facing camera and slowly start to move my palm closer to the shooter.

Though it took me a few moments to consistently unlock my handset with my palm, the more I used Hand ID, the easier it got. 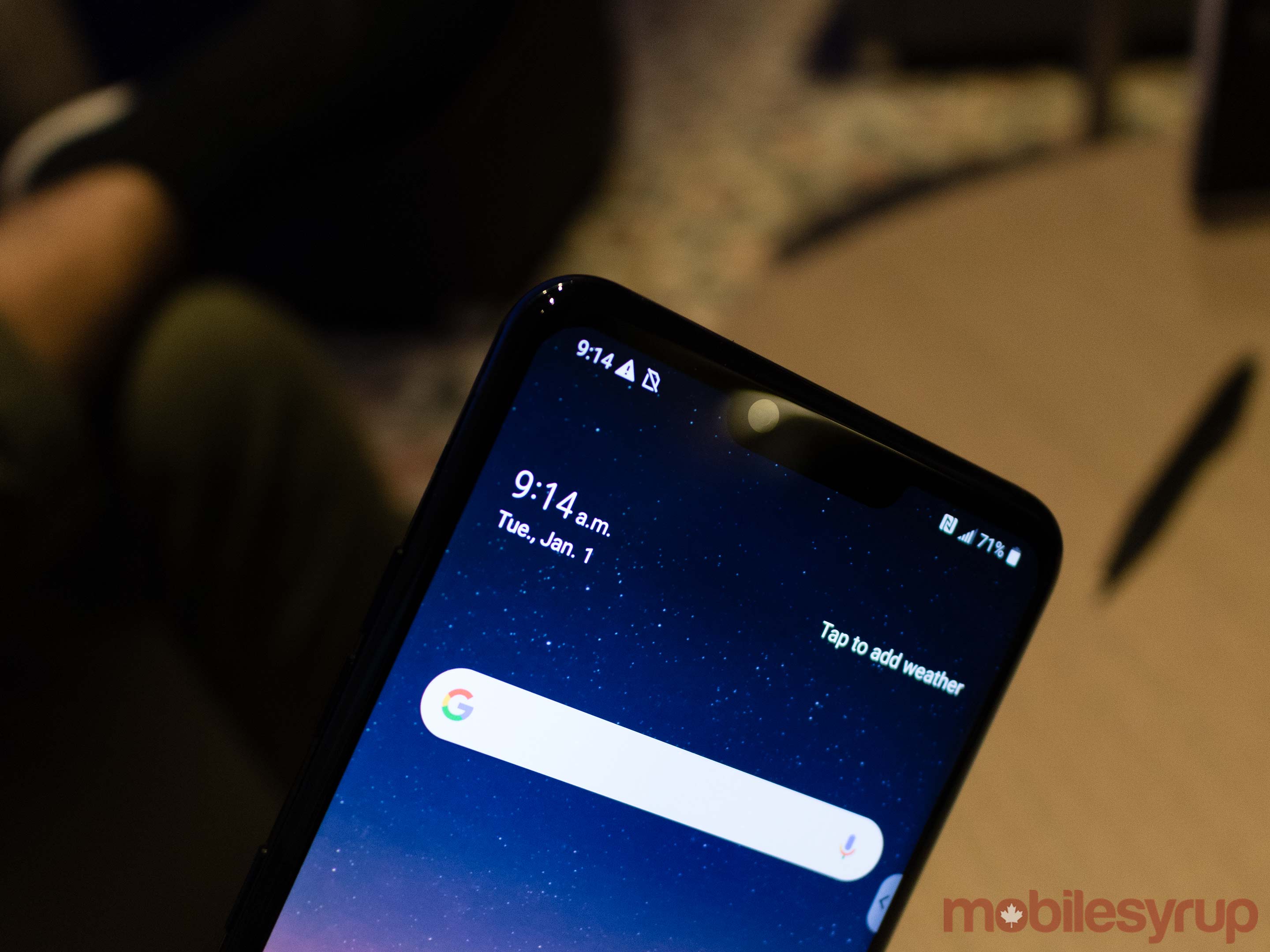 Hand ID is interesting because instead of simply taking a picture of a palm, the infrared technology actually penetrates through the user’s skin and recognizes the veins in your hand. While this might seem like science fiction for us in North America, in Japan and South Korea banks often use palm-vein authentication to verify identity.

The feature worked well but it wasn’t the speediest unlocking method. LG promises that the final version of the G8’s palm-vein authentication will work even faster than a fingerprint scanner.

Design that doesn’t stray too far

Moving onto the rest of the G8 ThinQ, the phone doesn’t stray too far from the G7 ThinQ, but its subtle changes help the handset feel even more premium.

Immediately when picking up the handset I noticed the device’s curved bezels, which makes the G8 feel more comfortable in the hand in comparison to the G7 ThinQ. In what I consider an odd move, LG didn’t curve the actual display of the phone, like Huawei’s Mate 20 Pro and Samsung’s latest S series handsets. Instead, only the bezel is curved. To explain further, the G8’s bezel wraps around the phone’s edge and then seamlessly connects with the device’s flat display. This makes the handset feel like it has a curved screen without actually curving the panel.

At first I didn’t think I’d like this look but in a way it makes sense. LG explained that not curving the screen gets rid of an extra bright white line that phones like the Galaxy Note 9 feature around their displays.

Also with the flat panel, the G8 avoids the colour disfiguration that the Mate 20 Pro features around its curved screen. 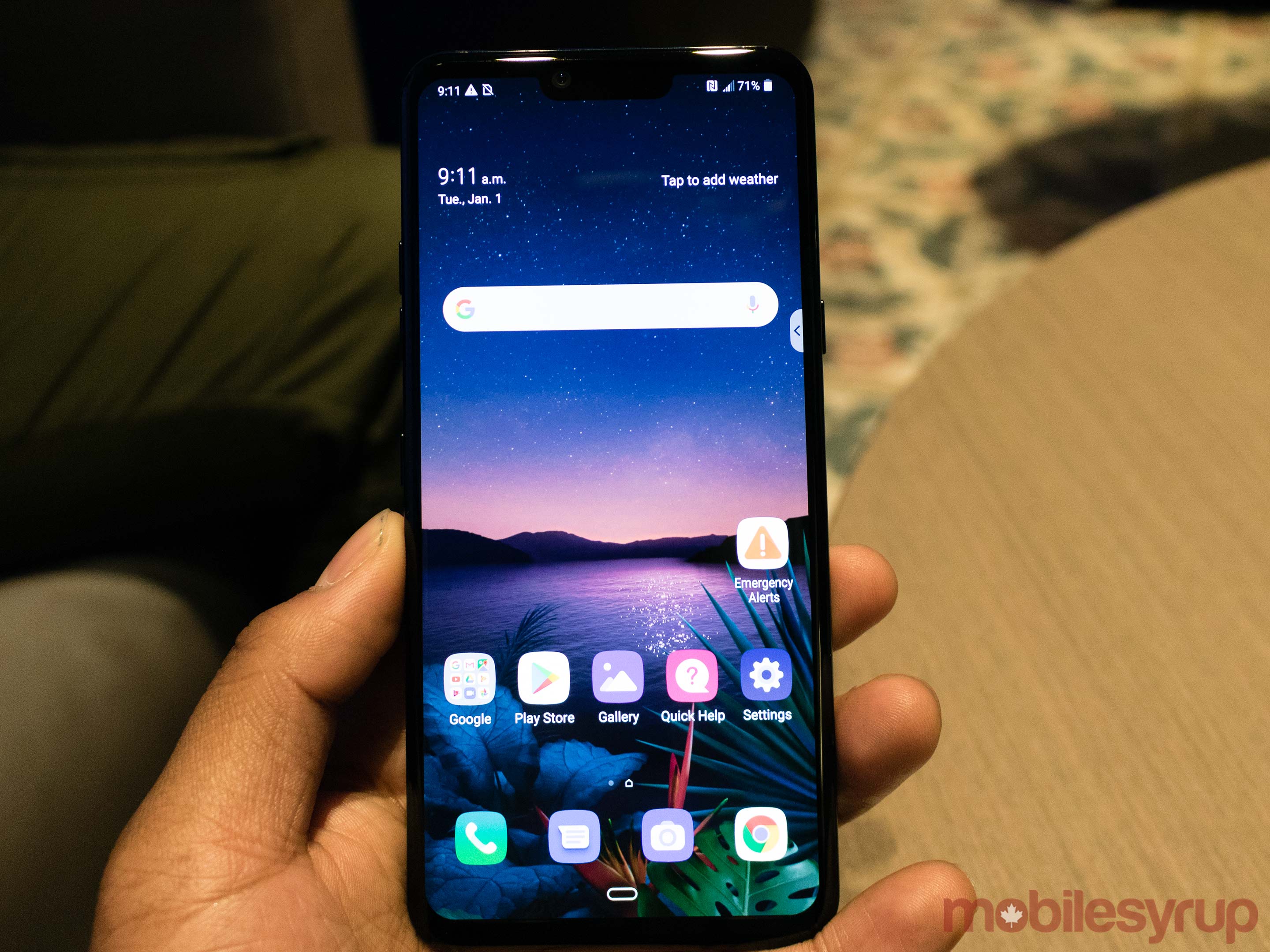 While on the subject of the display, the G8 ThinQ features a 6.1-inch Plastic OLED (P-OLED) panel, which is a first for the G-series brand.

I really liked the screen, which is odd considering I’m usually not the biggest fan of OLED panels, as in my experience they sometimes give me headaches. However, what’s worrisome is that the last time LG brought its P-OLED panels to Canada they had an issue with screen-burn in, like with the LG V30 and the Pixel 2 XL.

However, it seems like the V40 ThinQ, a phone that didn’t make its way to Canada, lacked the screen burn-in issues, so the G8 ThinQ might be safe. Either way, I’ll keep an eye out on this concern during the full review of the handset.

The G8’s display sports a 3,120 x 1,440-pixel resolution, that supports HDR10 and can achieve 600 nits of brightness. During my limited time with the phone, the picture looked great. However, I didn’t get a chance to watch any videos on the handset.

What else is new about the phone’s design is that it lacks a front-facing receiver and uses what LG calls ‘Crystal Sound OLED Display,’ which pushes sound from the back of the smartphone through the devices’ display. 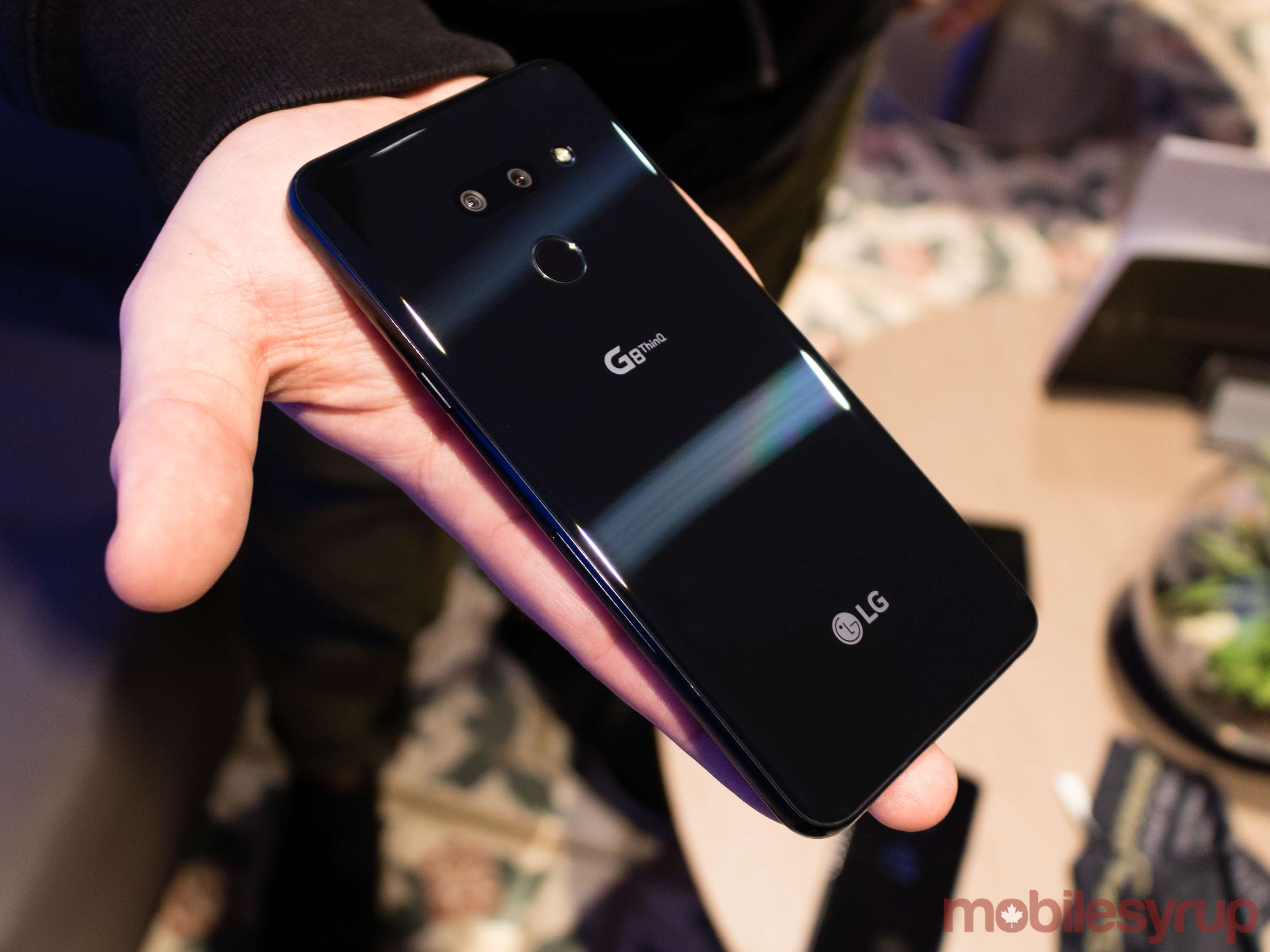 The rear of the handset now sports horizontal dual camera setup that has no camera bump whatsoever. In fact, the device’s rear is completely fleshed out, helping the handset feel and look even more premium.

Camera-wise, the phone features a 16-megapixel camera with an f/1.9 aperture wide angle lens as well as a 12-megapixel standard camera with optical image stabilization and an f/1.5 aperture. LG says the phone features better low-light capabilities, on both rear-facing lenses. The phone also sports a new camera function called ‘Studio,’ which lets users adjust the lighting, background, brightness and temperature. As previously mentioned, I’ll test out the phone’s camera functionality in full during my review.

The G8 ThinQ also sports a side-facing button that activates Google Assistant, similar to the G7. 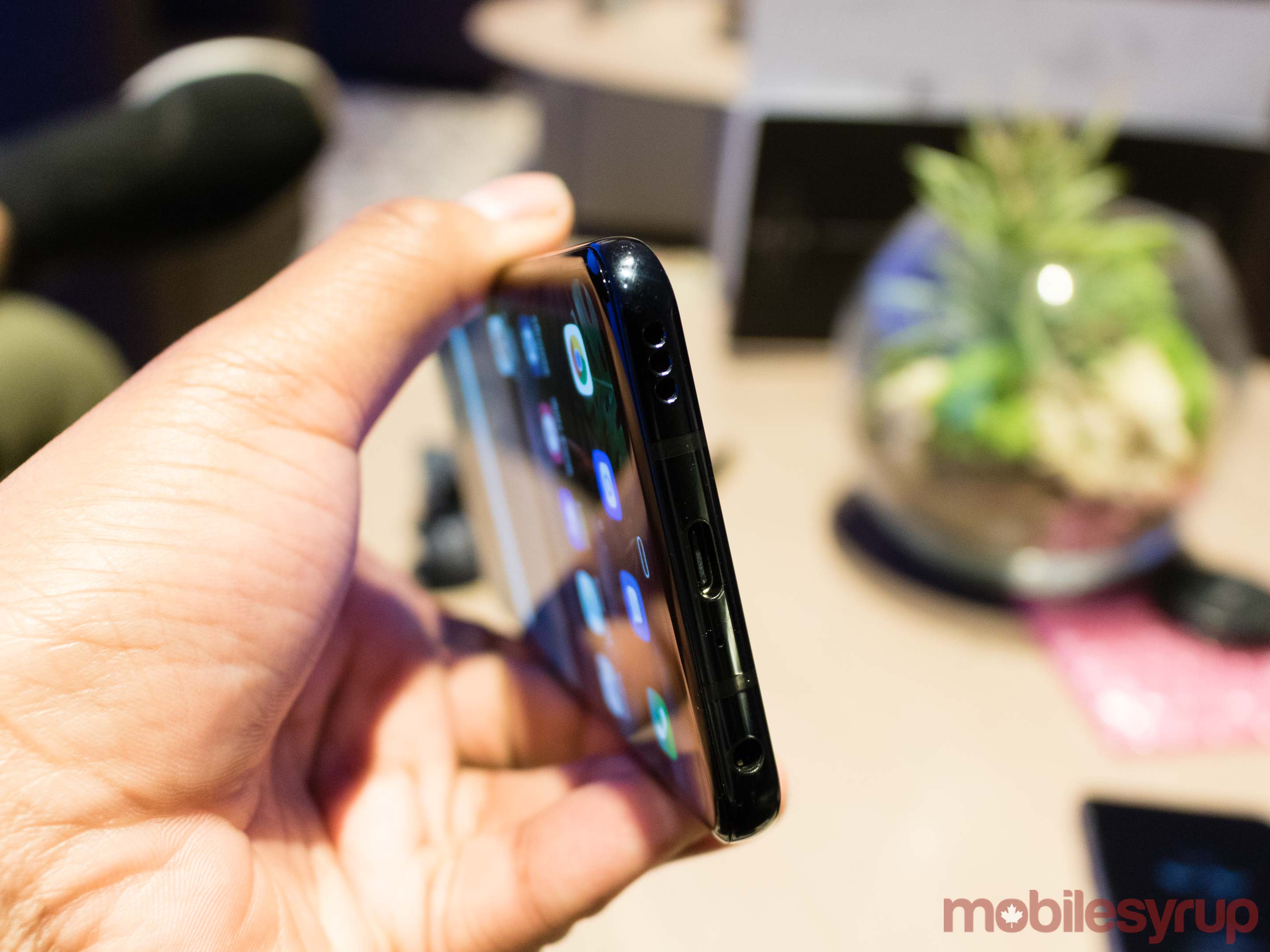 The LG G8 continues to feature the G7 ThinQ’s ‘Boombox speaker,’ allowing the phone to get quite loud and vibrate when listening to music. However, on top of the Boombox speaker, the phone’s Crystal Sound OLED Display also produces sound when audio is playing, making the device even louder than its predecessor. While it’s difficult to say if the phone was the loudest device I’ve ever used, it produced reasonably loud sound.

The Crystal Sound Display worked as a front firing speaker, so when I held the phone in portrait — as if I was watching a video or playing a game — and blocked the downward facing speaker, the sound emanating from the display was still clear.

That said, the Boombox speaker is a lot louder than the Crystal Sound Display. As a result, it’s better to keep the downward facing speaker grill unobstructed when listening to music. 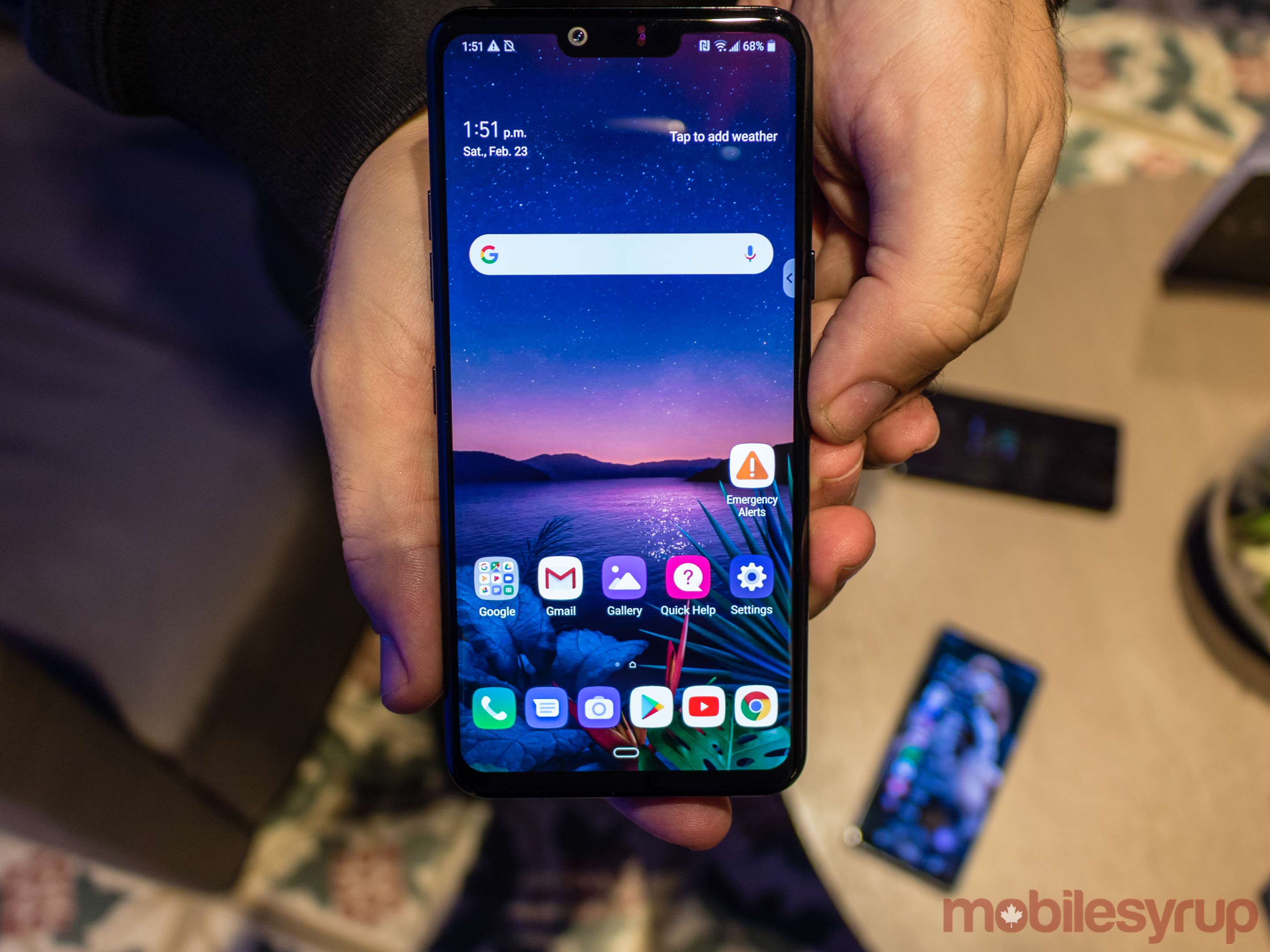 The LG G8 ThinQ sports Qualcomm’s flagship Snapdragon 855 processor with 6GB of RAM and 128GB of expandable storage. While I didn’t spend a lot of time with the handset, the G8 ThinQ felt quick and snappy. The phone doesn’t sport 8GB or 12GB of RAM like Samsung’s Galaxy S10+, 6GB of RAM will let LG keep the device’s cost down.

Additionally, 6GB of RAM is likely all the average user needs. In the full review of the handset, I will benchmark and test out the device’s performance while gaming, watching videos and day to day tasks.

The device also sports a 3,500mAh battery as well as 9-watt wireless charging. Additionally, it has an IP68 water and dust resistance and an 810G military grade standard, though I don’t advice dropping the handset. 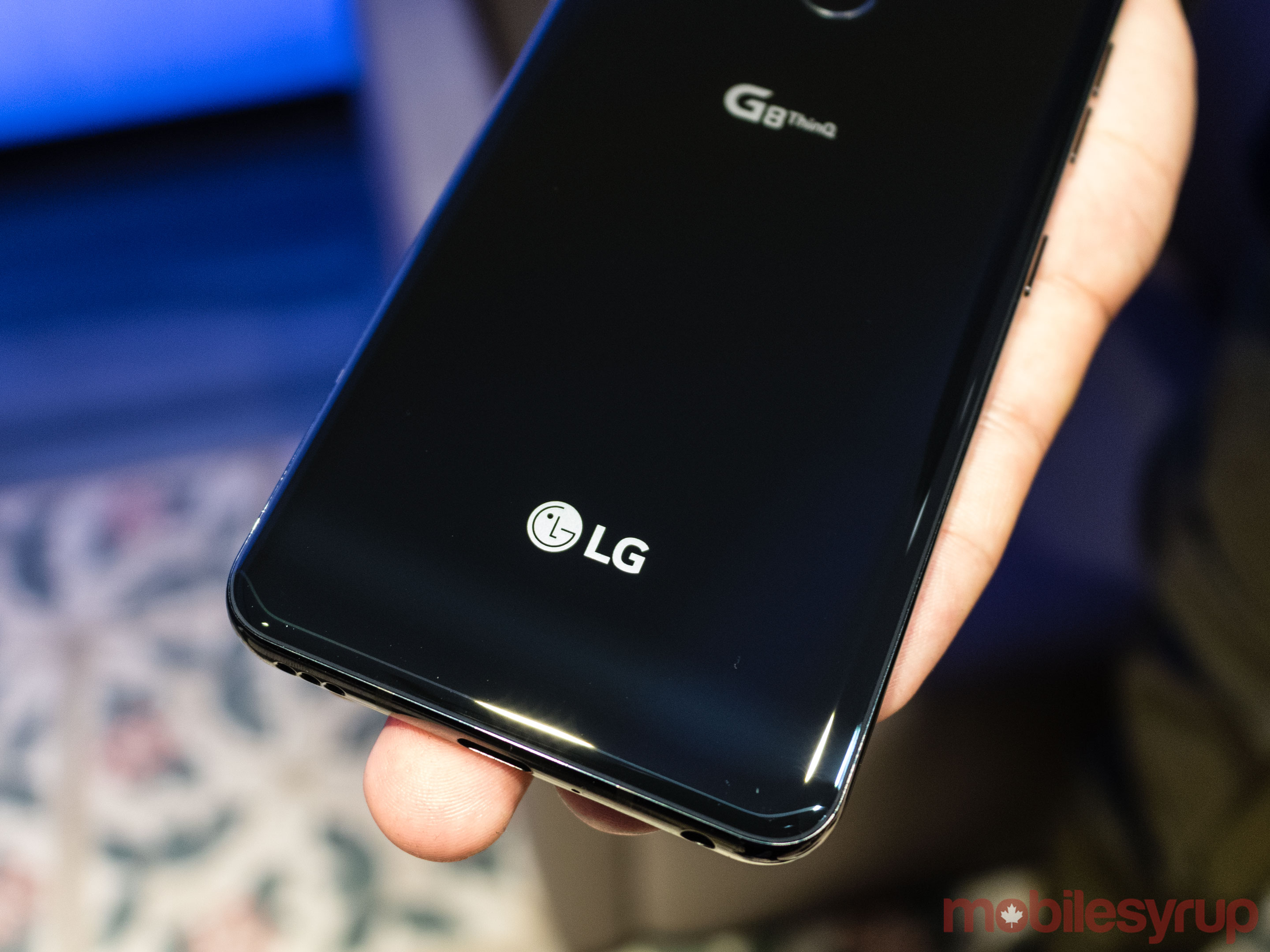 I’m excited about the LG G8 ThinQ, the handset features top-of-the-line specs, Android 9 Pie out of the box and an all-new ToF sensor. Being able to unlock your handset and launch new apps without actually touching the device is quite a fun experience. How useful I’ll find it, however, is unclear but it’s definitely alluring.

What makes this phone even more enticing is the G8 ThinQ’s price tag.

Outright the G8 ThinQ will cost $999 CAD through LG. Canadian carrier pricing and a specific release date beyond “spring 2019” for the G8 is still unknown. The Canadian variant will only come in ‘Aurora Black’ colour option.