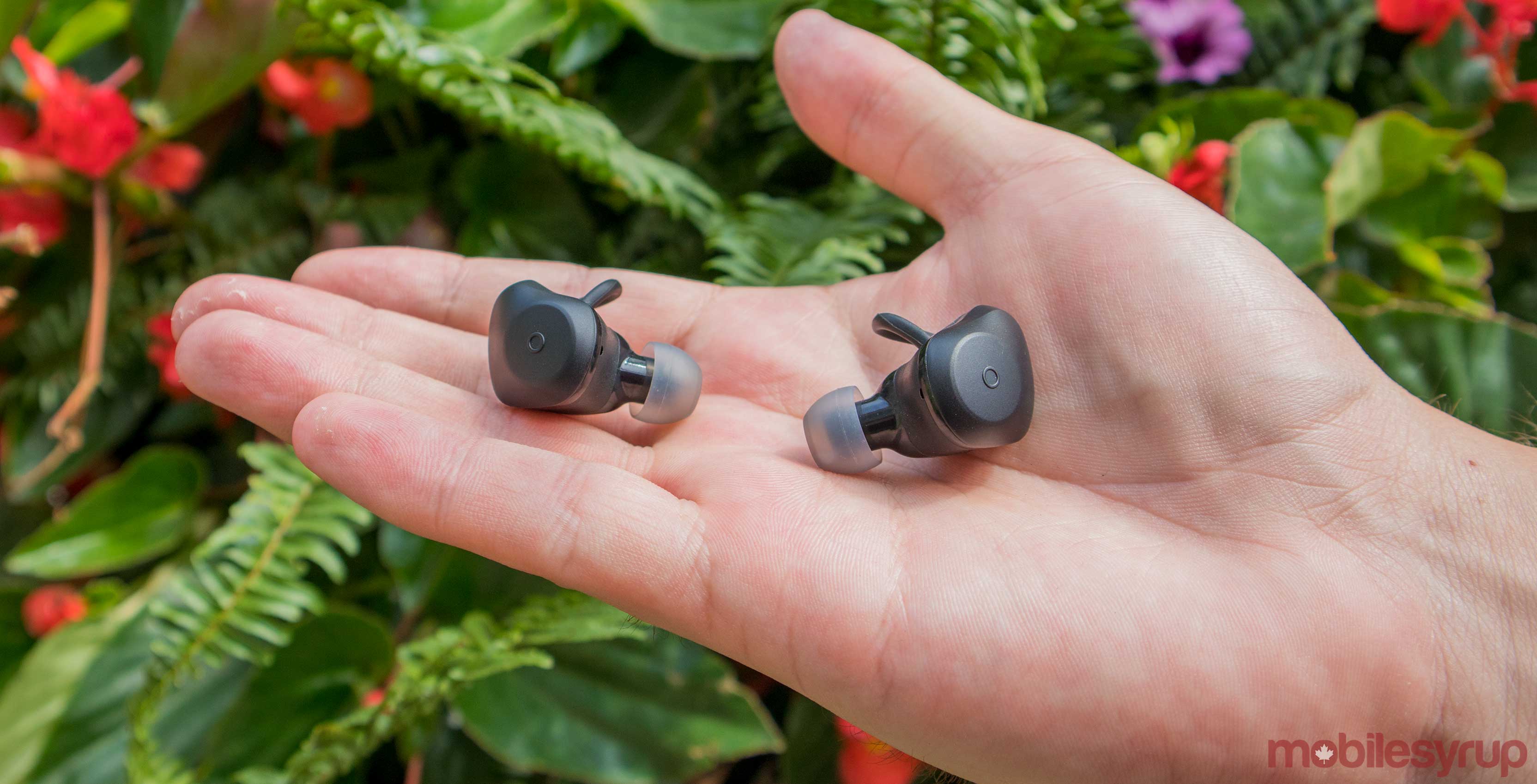 There are so many styles of wireless headphone available these days, but the flashiest are true-wireless.

While some may not believe in truly wireless headphones — I certainly didn’t — there are good arguments for their existence.

Unfortunately, those arguments often come with a hefty price tag.

Thankfully, a new Toronto-based start-up has a solution. Loop Earbuds won’t break the bank, and they’re pretty solid for their price. 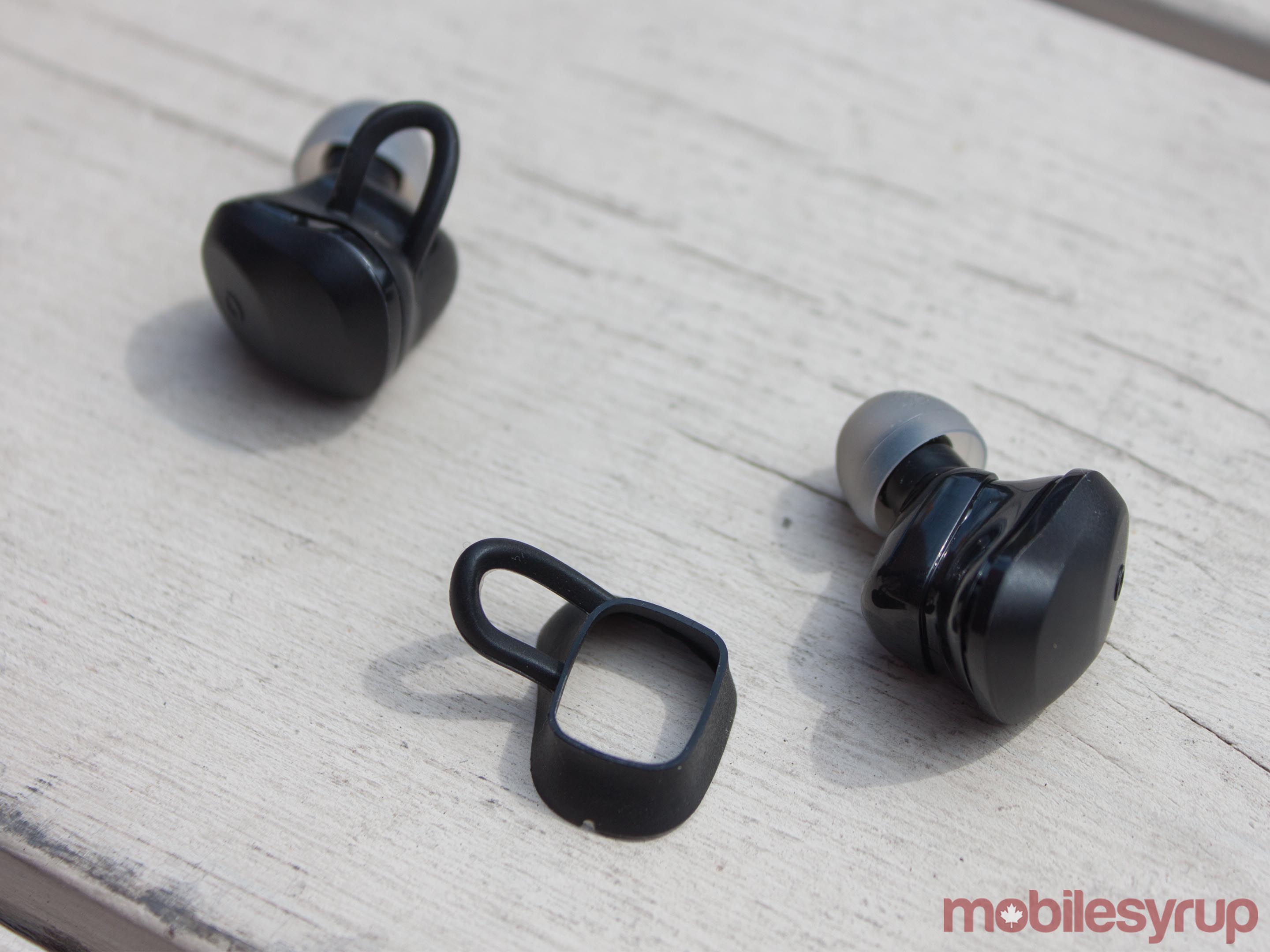 As far as ergonomics go, the earbuds are fairly comfy. The buds are your standard-fare silicon tip that fit in the ear. It comes with three sizes, as most headphones do. I found the medium size fit snugly in my ear.

What sets the Loop apart, however, is the titular loop. Each earbud features a unique silicon ring that slips onto the bud. On top of the ring is a loop of silicon that nestles gently into the cartilage of the ear. The loop helps keep the buds in place and it does a reasonably good job.

However, the loop isn’t perfect. I found after long periods of use my ears would get a bit sore. For what it’s worth, I haven’t used a pair of headphones that hasn’t hurt my ears after a long time, so your mileage may vary.

Loop also says the earbuds won’t fall out. Unfortunately, I can’t say that’s true. While the earbuds often fit snugly in my ears, there was one occasion where the right bud slipped out. I wasn’t exercising or exerting myself and was just walking to the train station, so I was surprised the bud came loose.

However, it only happened one time and the buds usually do feel secure in my ear.

One button too many 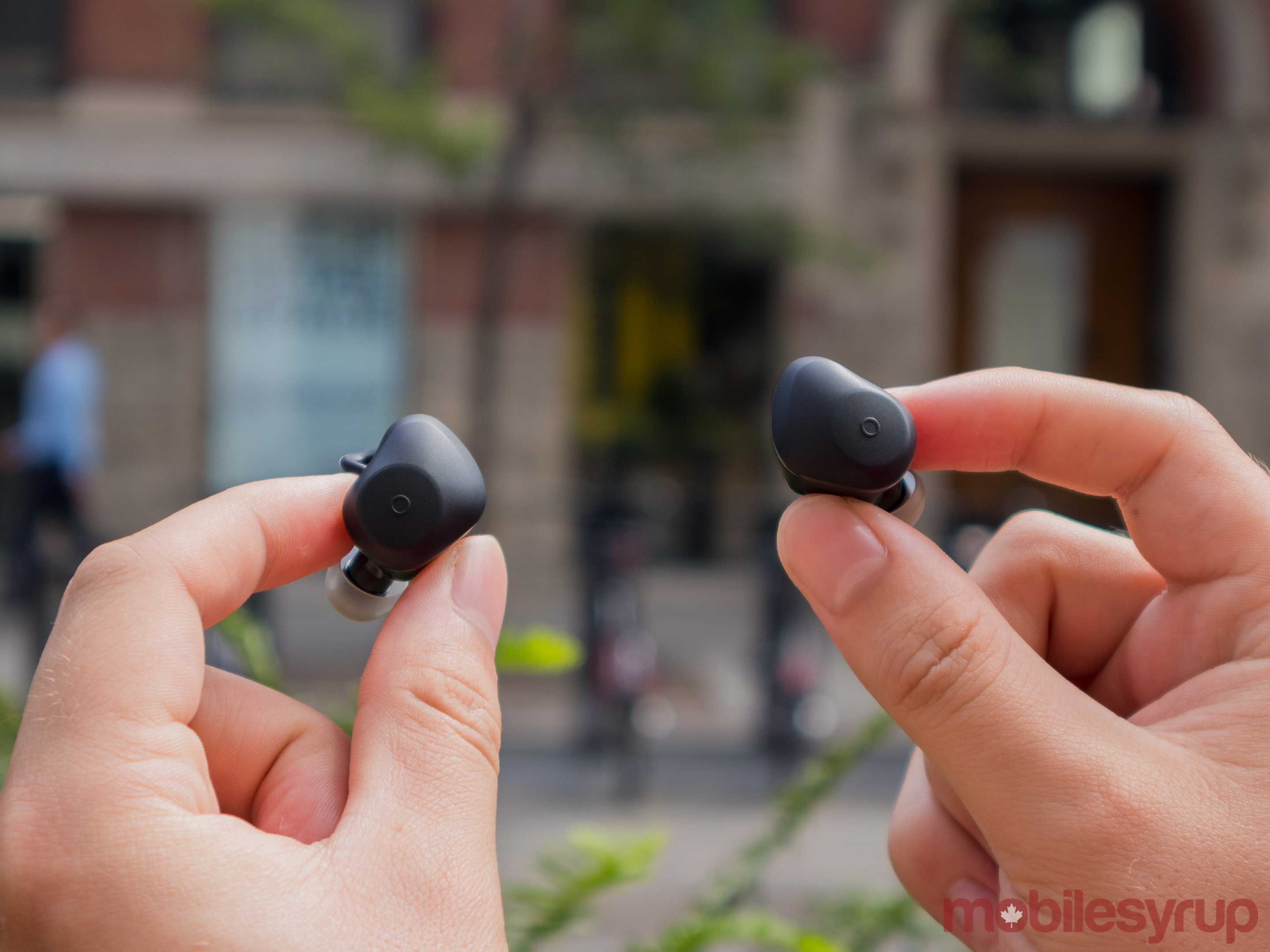 On the topic of big claims from Loop, the company boasts about the earbuds’ easy one button controls. In practice, these were less than ideal.

Both earbuds feature a single button that plays or pauses music, skips tracks and activates Google Assistant or Siri. You can also press it to answer a phone call.

However, I found them awkward to press. They’re clicky and tactile, don’t get me wrong. The issue is that they take a decent force to activate. When the earbuds are comfortably resting in my ear, I don’t particularly enjoy pushing them that hard.

Granted it’s a small complaint, but I found more often than not I chose to control music from my phone rather than the earbuds just to avoid pressing them. Alternatively, I’d take out one headphone to press them. 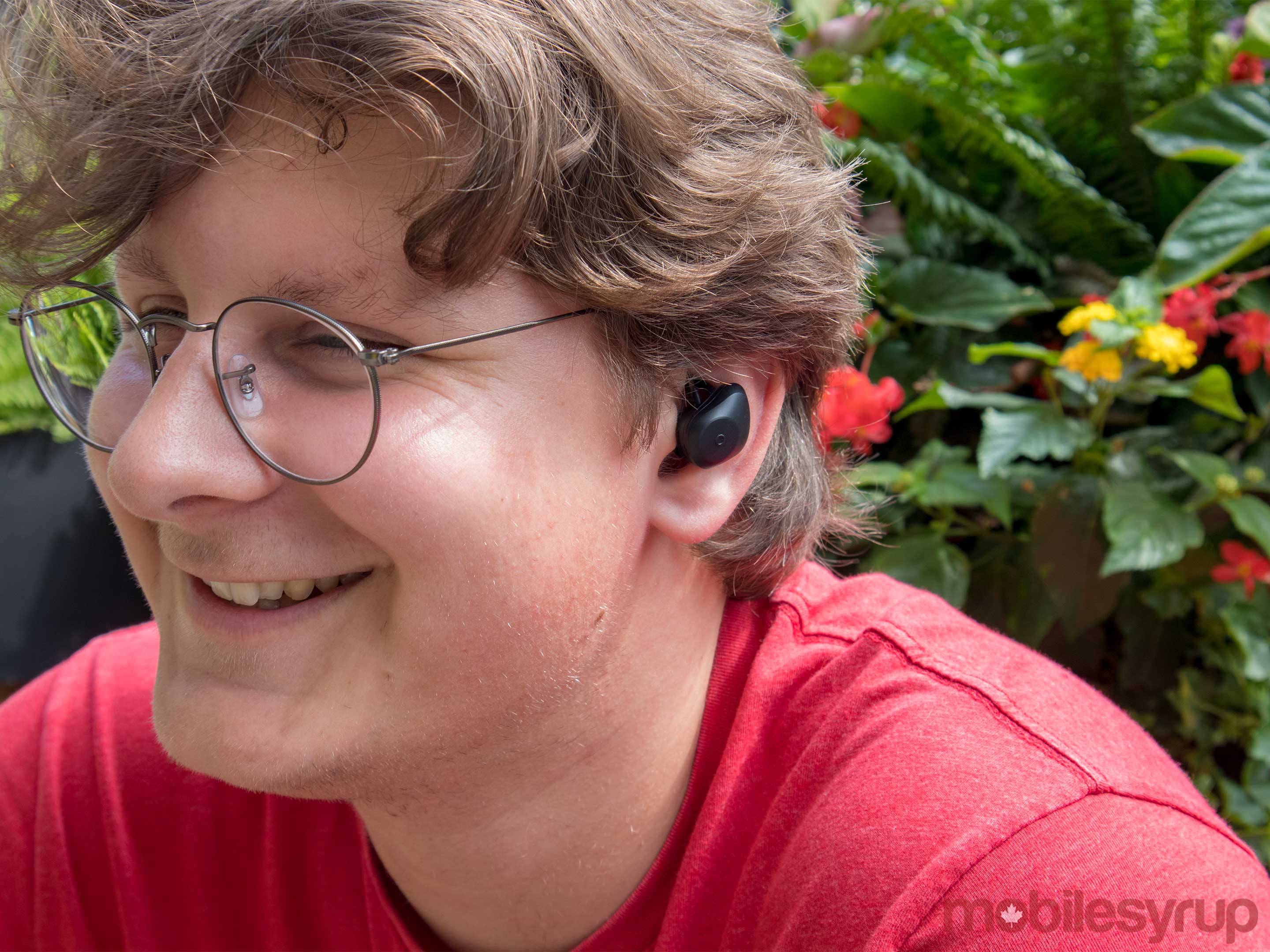 Loop earbuds feature both high-fidelity (Hi-Fi) sound and passive noise cancellation. I found the latter to be quite good — putting in the headphones really cuts out the sound around me, but not too much. I use headphones primarily at work and while commuting.

At work, the Loop Earbuds are fantastic. It’s almost absolute silence with them in. While commuting I find they let in a little bit of noise, but not too much. For me, this is important because it lets me hear people around me as well as vehicles on the road, approaching trains and other potential hazards like that.

As for the Hi-Fi sound, that’s a different story. I’ll preface this by saying I’m not an audiophile by any means. With that said, I find the Loop earbuds sound good. I wouldn’t say they’re acoustically great, but they’re certainly not awful.

I find the biggest factor is the song I listen to. Some songs sound very shallow, like there just isn’t enough bass. Other songs sound fantastic and very full and loud.

My baseline here are my regular headphones. On the go, I use a pair of Jaybird Freedoms. At home, I use Audio-Technica ATH-M50 headphones. I’d place the Loop earbuds at about the same level of the Freeedoms, which is to say decent sound.

I think having an app to customize EQ settings and sound curve, such as the Jaybird app, would go a long way to making the sound more consistent.

Bluetooth 5 helps, but it doesn’t solve the problem 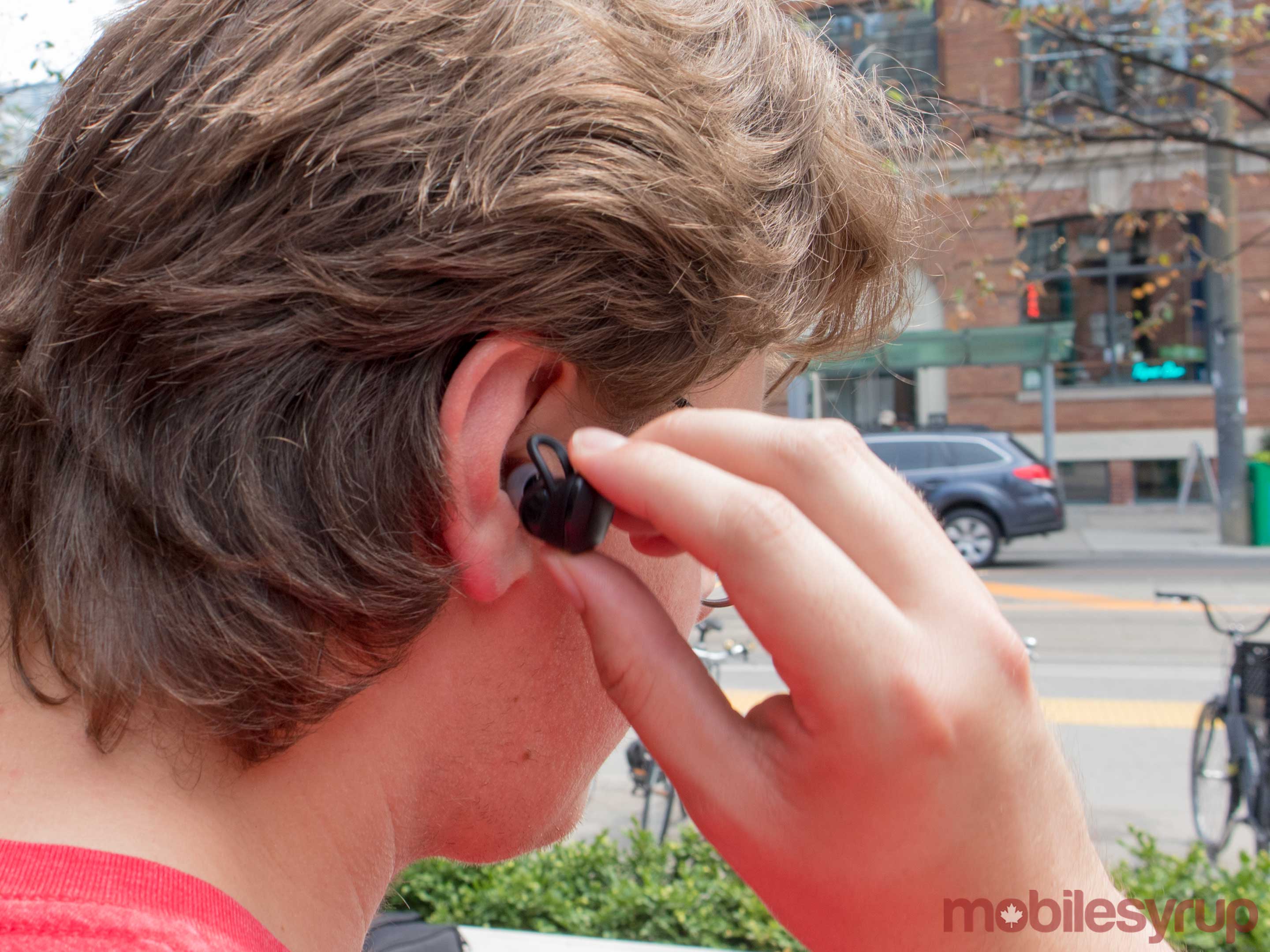 Another point for Loop is Bluetooth 5.0. The newest Bluetooth standard allows for higher transmission speed and greater range than Bluetooth 4.2. This is great for headphones, as it enables higher quality audio transmission.

Furthermore, the main competitors Loop cites, like Apple’s AirPods and Bose SoundSport, use the older standard.

However, this isn’t as much a knock against them as you’d think. Bluetooth 5 doesn’t fix some of the most glaring issues with truly-wireless headphones, being connection. The first part of that is initial set-up.

AirPods’ most killer feature is that set-up. You flip open the case and it prompts you to connect it. After that, whenever you want to use them you just flip open the AirPods case to connect.

Unfortunately, Loop Earbuds aren’t that seamless. First you have to press-and-hold the button to initiate pairing, then find Loop in your phone’s Bluetooth settings. After that initial pairing, I’ve found it seamless. Opening the case connects the buds to your phone.

While overall it isn’t bad, it creates more failure points. One bud could lose connection to the other. If the main bud loses connection to the phone, they both go. I found this happened to me a lot. Granted, I was testing a prototype unit.

Loop told me that there may be some issues with the prototype. The company also said they’ve worked out those kinks in the final product.

Charged up and ready to go

The last big claim from Loop is a 12-hour battery life. That breaks down as four hours in the headphones and eight hours in the case. Total that number up results in a lot of listening time. Specifically, Loop says the earbuds are capable of three hours of music playback at full charge, or four hours of phone calling.

I found the earbuds were solidly reliable in battery life. My typical commute takes about two hours of walking and train-riding, and I spend that time listening to music. Often, I’d get to work with about 50 percent battery left on my earbuds. Additionally, the buds charge up quickly in the carrying case.

The case also provided the battery life advertised. I found I’d have to give the case a charge once every couple days, which is fairly reasonable considering how much I use the headphones. 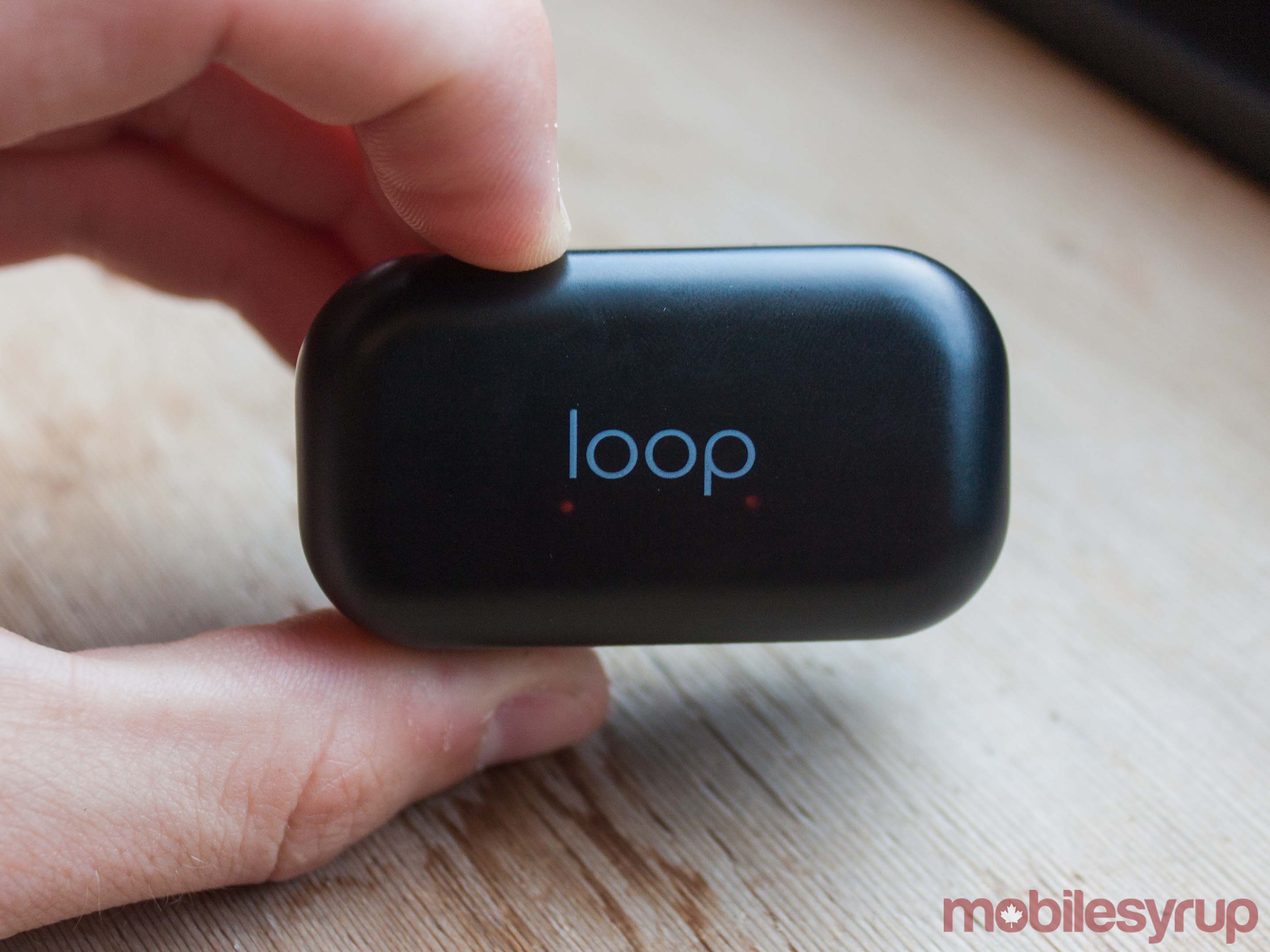 The charging case also comes equipped with four orange LEDs on the front that indicate the charge level of the case.

Additionally, the top of the case has two semi-transparent holes, just below the ‘l’ and ‘p.’ The holes let you see the charging status of your earbuds.

Great for the price

Overall, the Loop Earbuds are a solid offer for anyone who wants truly wireless headphones without breaking the bank. Compared to the $220 AirPods or the $250 Bose SoundSport headphones, $130 is a steal.

Furthermore, the headphones are well thought out and designed. The charging case is smart and convenient, the headphones comfortable and durable. Additionally, the earbuds are IP54 water resistant, which is great if you sweat a lot or get caught in the rain.

That being said, there are some drawbacks to the Loops. They don’t have the same instant connection as the AirPods, and while the sound quality is good, it isn’t great. At the Loops' price though, those are drawbacks I can live with.

Finally, its worth noting that these headphones aren’t publicly available yet. Currently, Loop is running an Indiegogo campaign set to end in about two weeks. At time of writing, the company was 83 percent of the way to its goal.

The team behind Loop is currently offering a number of earlybird deals, including a limited time offer that netted the headphones at 50 percent off. At that price, you certainly can’t go wrong with Loop.

"Comfortable truly wireless headphones for people who don't want to spend a lot of money."