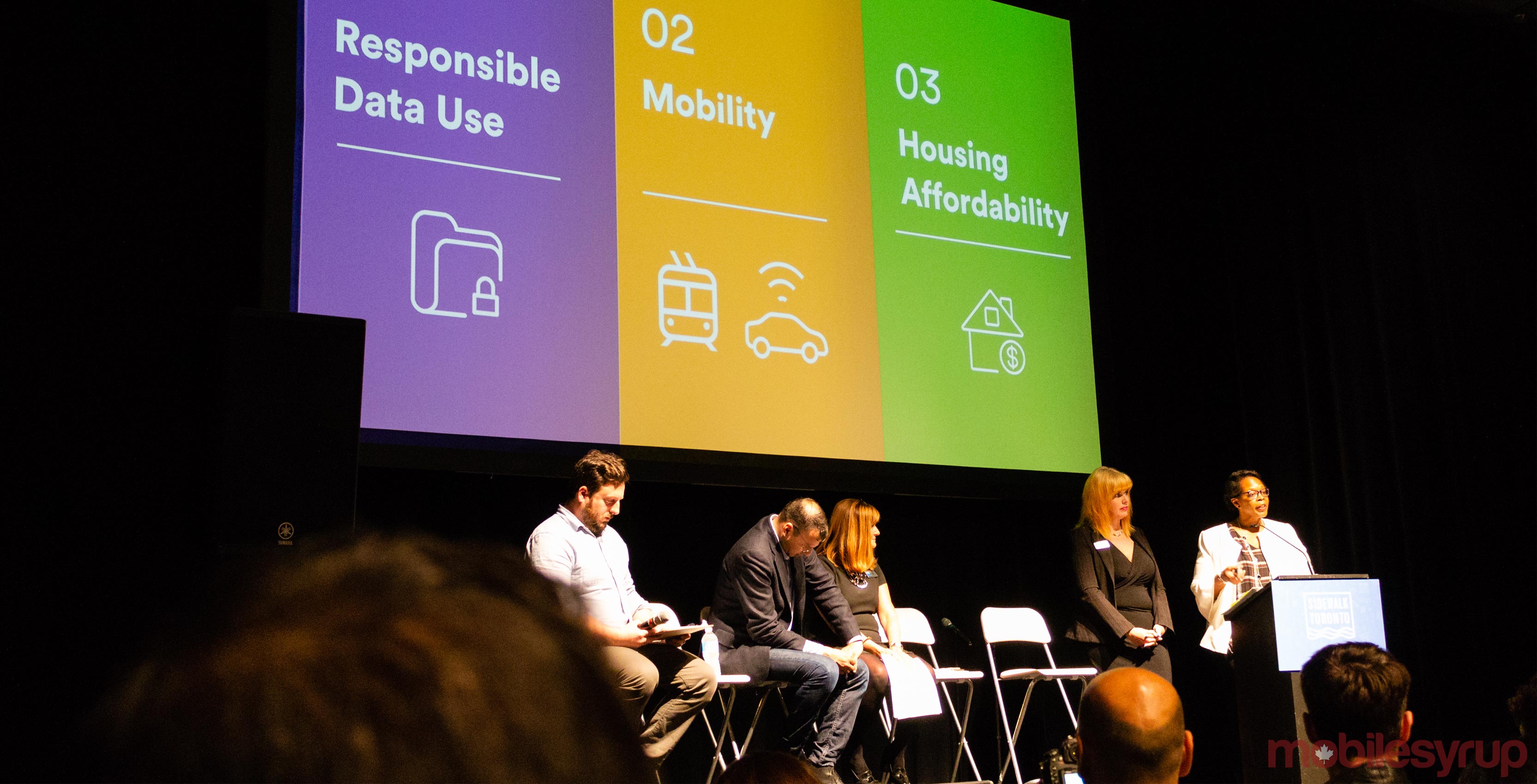 The gathering featured presentations on mobility and affordable housing, but most audience questions and comments were based on concerns about privacy and data collection.

One attendee, for instance, expressed the belief that a “multi-stage holder” group with representatives from multiple groups would be best for managing data.

However, it was Toronto-resident Jennifer Joiner, who took to the mic and posed perhaps the most impassioned plea for accountability and transparency of the evening.

“We are possibly in deep trouble” — Jennifer Joiner, Toronto resident

“You’ve gotta get down and do more than just present best-case scenarios like wanting to see a senior cross the sidewalk safely,” said Joiner, during the question-and-answer period. “We are possibly in deep trouble.”

In an interview with MobileSyrup following the presentation, Joiner said that she recognizes that cities already collect quite a bit of public data, but that she wants Sidewalk Toronto to be more forthcoming about how it plans to use and store the terabytes of data it will eventually gather.

“…If the tradeoff is more data that’s not well-controlled, I don’t know” — Jennifer Joiner, Toronto resident

“It is a corporation, it is a for-profit corporation. There will be oversight from local governments, there are legal frameworks and so forth, especially around privacy, so I think I’d like to see more acknowledgment from them on this context that they’re working within.”

Still, even though she expressed concerns, Joiner did admit that she believes there’s quite a bit of good that can come from Sidewalk Toronto and other similar projects.

“It’s a brave new world there and I think we’re seeing the beginnings of it,” said Joiner.

“But if the tradeoff is more data that’s not well-controlled, I don’t know.”

Sidewalk Labs and responsible data use

For its part, Sidewalk Labs’s used the presentation to discuss its recently released Responsible Data Use Policy Framework.

“We need to have not just a good but a great privacy and data-use policy…” — Alyssa Harvey Dawson, Sidewalk Labs

The two discussed the policy framework, explaining that the conversations currently taking place around Sidewalk Toronto’s data gathering and data storage continue to play an important part in shaping the project’s direction.

“We need to have not just a good but a great privacy and data-use policy, and one of the reasons that we released our framework is because we are striving to get there,” said Harvey Dawson, during the presentation. “Without it, we understand that this is a place that’s not going to be successful.”

Harvey Dawson and Verner both echoed the fact that Sidewalk Toronto is a unique project and that the privacy policy that’s currently in the works will be one of the first in the world.

“We’re literally building this together along with you guys,” said Harvey Dawson.

“We’re literally building this together along with you guys” — Alyssa Harvey Dawson, Sidewalk Labs

“What it means for this project is that we’re going to have privacy considerations that are based on and applying the principles that we laid out from the beginning of the project through its design and through its implementation and as we go on an iterate on it,” said Harvey Dawson.

Though Sidewalk Labs proudly showed off its newly minted policy framework, Harvey Dawson told MobileSyrup in an interview following the presentation that the company is still engaging in early discussions with its community partners.

“We have our digital advisory board where we have people from Waterfront For All and Evergreen who’ve been engaged with us at the early stages and so we’re literally at the beginning of the conversations,” she said.

“We haven’t had substantive conversations with them yet. We’re actually having a kick-off meeting to have more deeper dives next week.”

“We haven’t had substantive conversations with them yet” — Alyssa Harvey Dawson, Sidewalk Labs

Harvey Dawson also told MobileSyrup that conversations about where precisely data will be stored are still ongoing.

Sidewalk Toronto’s 307 Lake Shore Boulevard East offices are set to open to the public in June 2018.

The company’s next public roundtable will be held on July 11th, 2018.