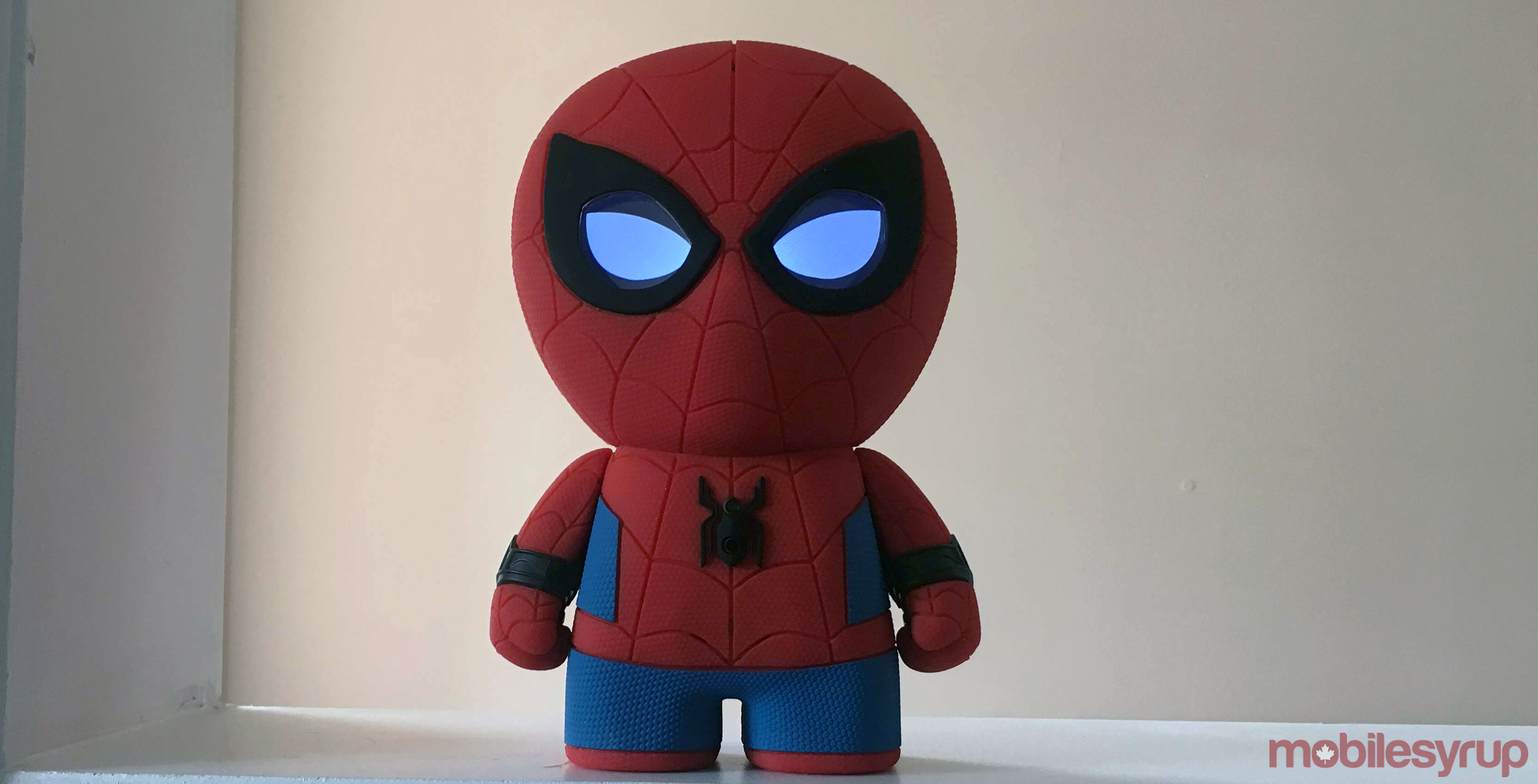 Connected toy maker Sphero has gotten the licenses to some major properties.

In 2015, the company made a Star Wars BB-8 droid, and more recently, it worked with Disney again to make a remote-controlled Lightning McQueen car. Now, Sphero is continuing this partnership with Disney by tackling Marvel’s Spider-Man, to coincide with the new film Homecoming.

To start, the toy’s design is based on Spider-Man’s sublime costume from the latest movie, and is coated with a sleek ultra-premium silicone suit to boot, which looks and feels great. He also has high-resolution LCD eyes to show happiness or blinking, also following suit of the movie Spider-Man’s wonderfully expressive eyes.

But what can he actually do? That, as it were, is up to you. The Spider-Man toy can be controlled via Bluetooth through dedicated iOS and Android apps, or by voice commands. The latter is initiated by double tapping the spider button on his chest. It’s simple to use and fairly responsive, although there were times when I thought I was speaking clearly but the toy didn’t seem to understand.

There is also a degree of personalization involved. When initially pairing the app to Spider-Man — and after the requisite updates are completed — you’ll be prompted to give yourself a name. You can choose from a slew of titles, like ‘Tiger,’ ‘Patriot,’ ‘Machine’ and ‘Hunter,’ as well as words to describe them, like ‘Incredible,’ ‘Colossal,’ ‘Battle’ or ‘Pyro.’ Letting my humility momentarily slip, I named myself ‘Amazing Dude.’

You can also select a super power to choose from, and this can be used in missions where Spider-Man needs your help. I went with ‘Indestructible Arms,’ although you can make such combinations as ‘Whirlwind Claws,’ ‘Shockwave Blasters,’ ‘Bionic Waves’ and more. 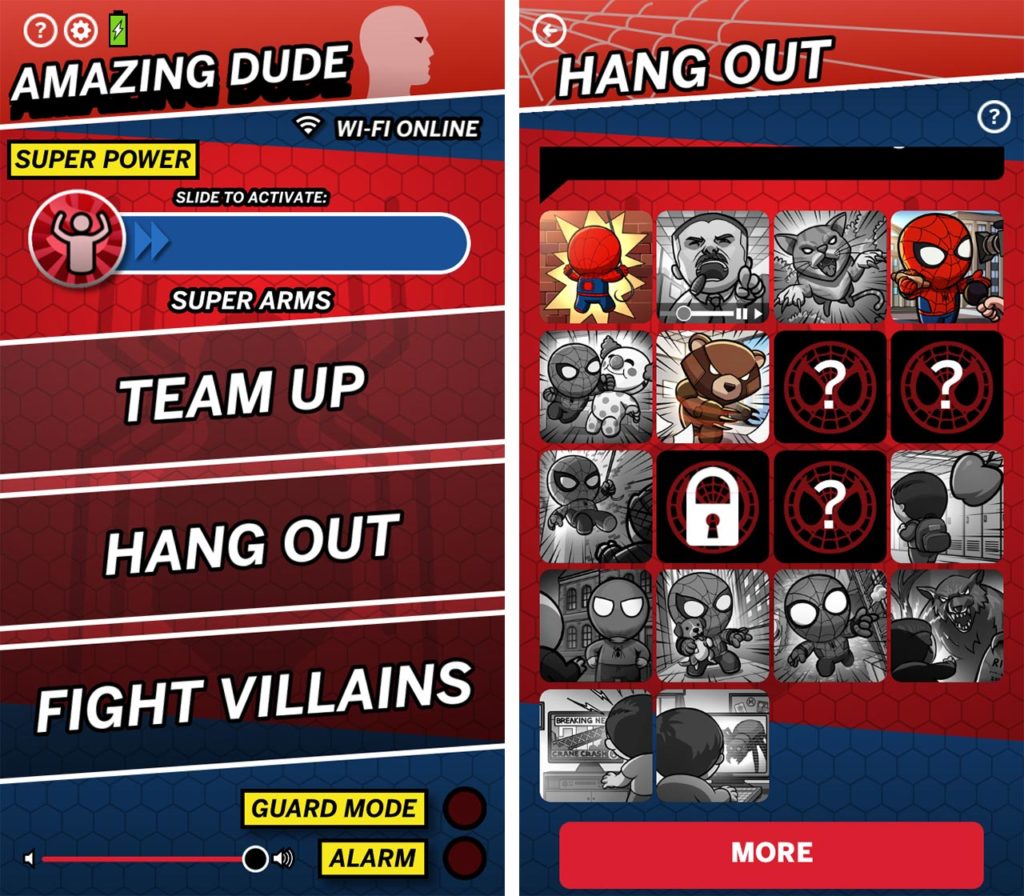 Once you’re setup, you can select “Team Up,” “Hang Out” 0r “Fight Villains” options from the app. In Team Up, you’ll be able to play a series of mini-games with Spider-Man, such as trivia (where he quizzes you on himself) and seeing if you can sneak up on him before his built-in motion sensors find you.

In Hang Out, you can listen to him recount stories (a highlight was one about a J. Jonah Jameson rant that was autotuned), tell jokes and more.

Finally, Fight Villains lets you go on crime-fighting excursions with Spider-Man. In one of them, Spider-Man fights the Rhino, and when you hear the villain snort, you have to lift the toy to “avoid” his attacks. At one point, Spider-Man will ask you to use your superpower, which is triggered through the app, to give him a hand. 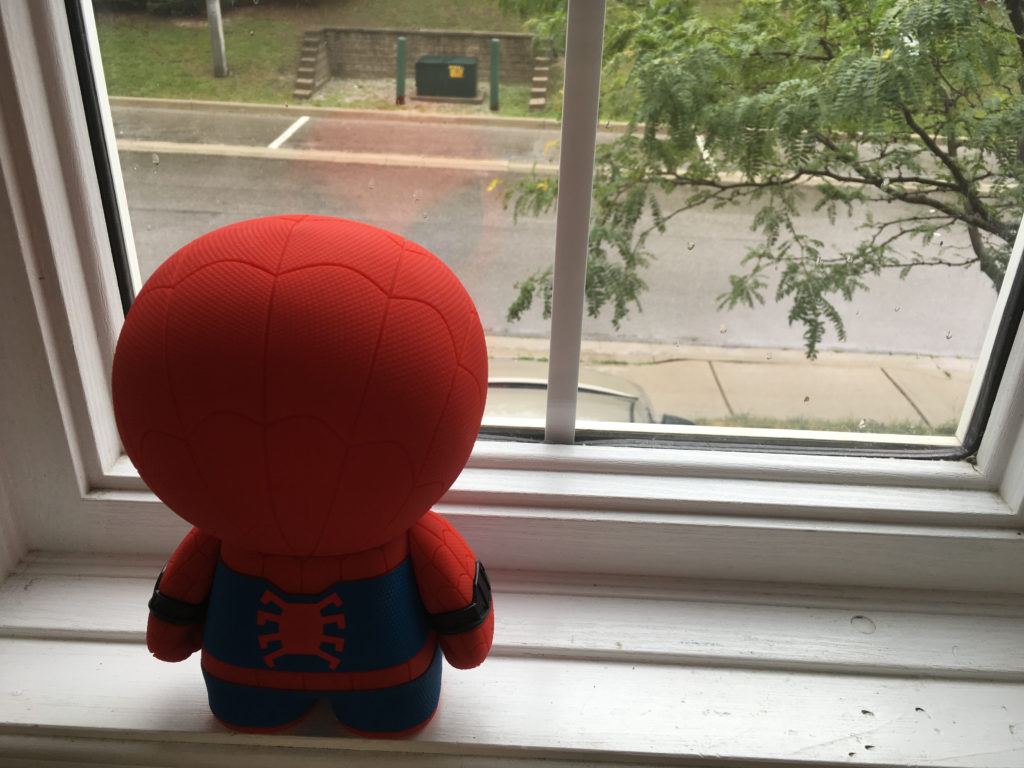 Another mission had us investigating a bank robbery, with Spider-Man asking me what clues to investigate first. It adds a nice little ‘Choose Your Own Adventure’ flair to the proceedings.

Perhaps the most interesting feature is his Guard Mode, in which Spider-Man’s eyes will dim and he’ll look out for ‘intruders.’ Using motion sensors, Spider-Man will know when there is movement around him and react accordingly.

I was impressed (and sometimes startled) by his motion-tracking abilities. I put Spider-Man in Guard Mode on a table beside me while I sat and played a video game, and every time I would lean over to pick up my nearby phone, he reacted to my movement. 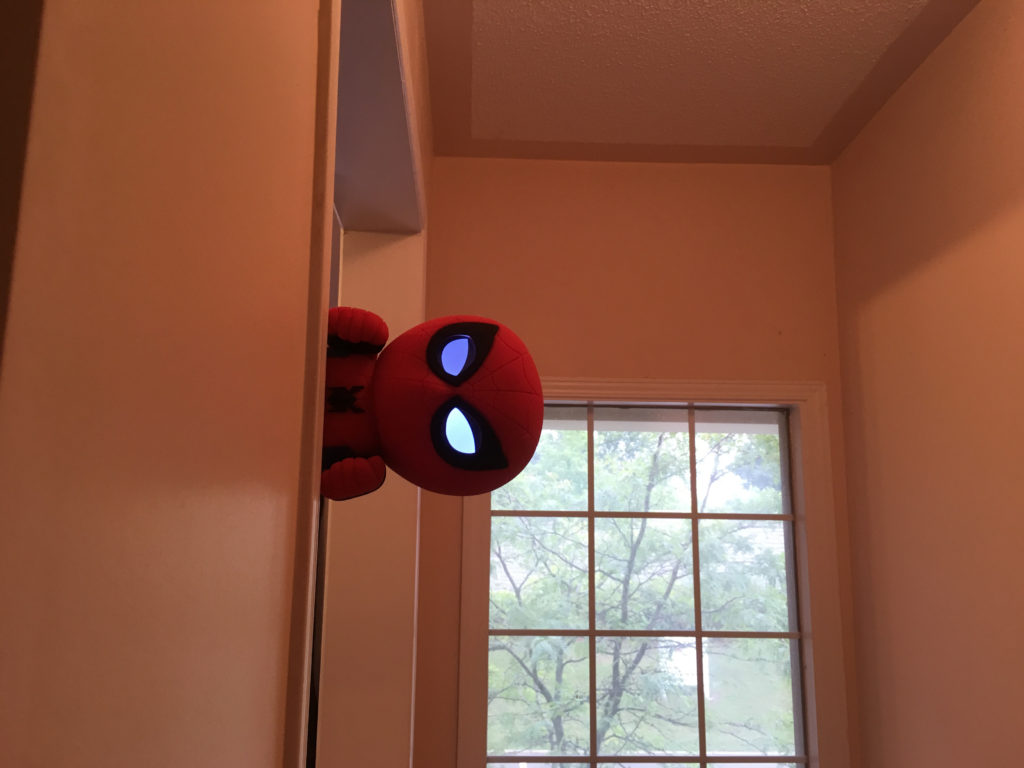 “Hey, you! You don’t belong here!” he might say, before ‘webbing’ me with a little “thwip” sound. Following this, a little “whoosh” sound plays to signify that he’s swinging away to fight more crime. This was particularly entertaining with my dog, who was perplexed at this small speaking toy reacting to her movements. Placing Spider-Man while in Guard Mode in a dark room is also a great way to mess around with others; I put him in my kitchen with the lights off and when my mum walked in, she was momentarily scared by the toy’s sudden outburst.

Leaving him in Guard Mode and going off to do something else can be interesting as well. I returned to him a few hours later and he gave me a report indicating the actual real times during which he noticed “suspicious” activity. You can then tell him to “Stand Down” to end Guard Mode. Amusingly, when I turned off this mode, Spider-Man once made an amusing spoof of “Turn Down for What” by saying “Stand Down for What” and playing accompanying music. He can also be set as an alarm using the app. More content will be added, too via updates through the toy’s app, according to Sphero. 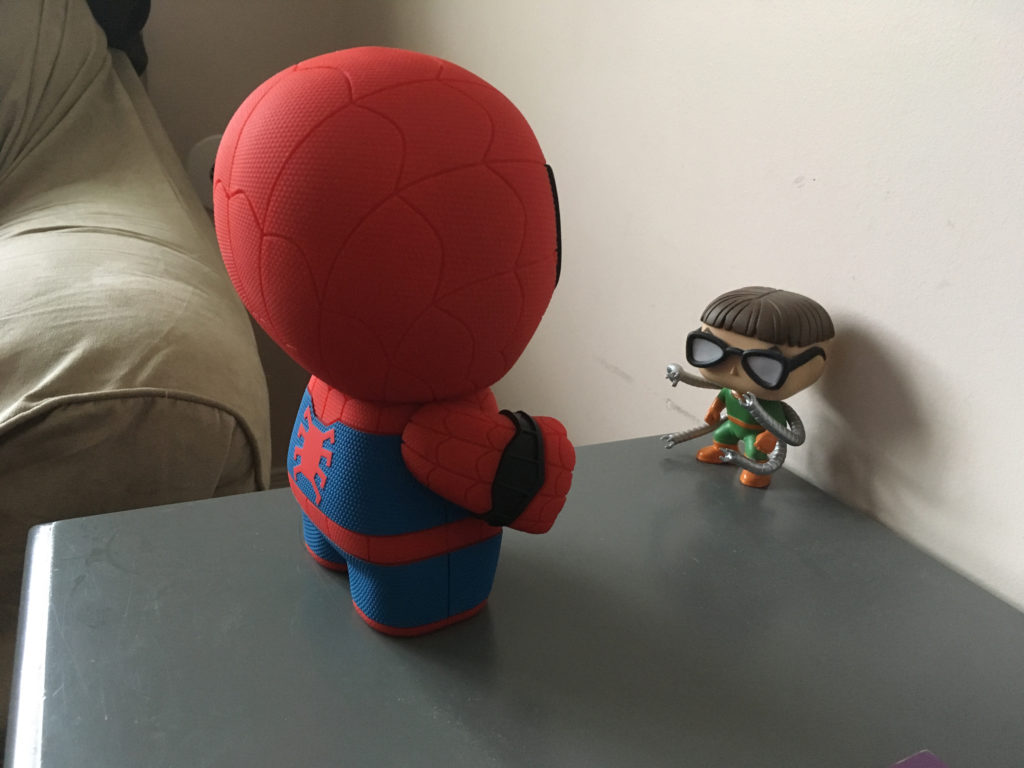 With all that said, I’m not sure if I would recommend the Spider-Man Sphero. The toy oozes charm, no doubt, from his enthusiastically-voiced and colourfully-written dialogue, but outside of that, he’s rather limited in what he can do. While the Lightning McQueen and BB-8 toys are movable via remote controls, Spider-Man is a lot less dynamic.

You can move his arms slightly, but otherwise he’s effectively a cool-looking figure that speaks. Of course, I wasn’t expecting him to actually be able to swing from a web or climb a wall, but at least a few more points of articulation and maybe even robotic moving arms would have gone a long way. 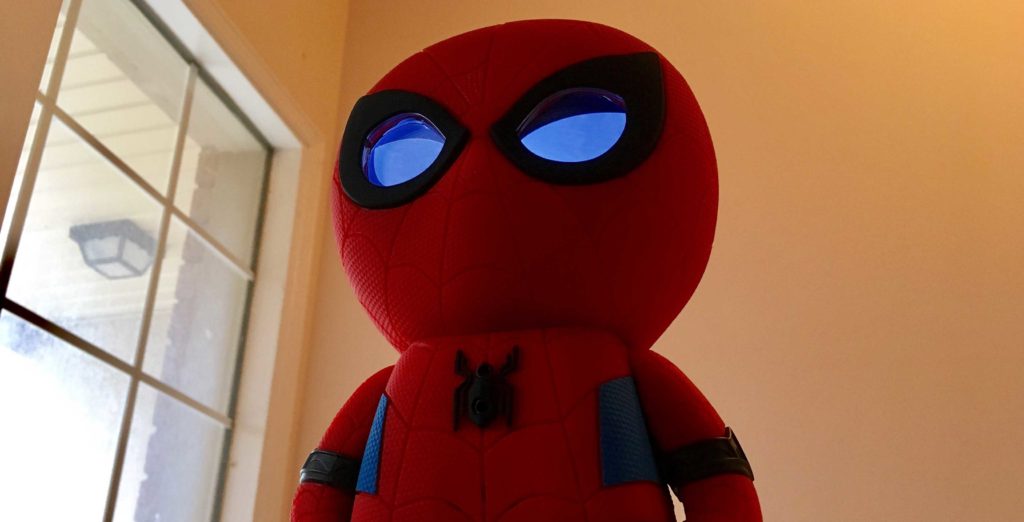 Furthermore, since most of the content is dispersed through Spider-Man’s dialogue, a lot of the missions and other features have to be imagined, rather than actually seen. Because of this, even though there are dozens and dozens of different missions and dialogue options, they are all fundamentally similar in execution.

In and of itself, this somewhat restricted functionality that the toy actually has would be perfectly fine, but given the rather steep $200 price tag, I’m not sure if it’s worth it. Still, the toy is faithful and endearing recreation of Spider-Man’s wise-cracking, whimsical and fun nature, and for young kids especially it could be quite entertaining, as long as you’re mindful of the price and limitations.

Spider-Man by Sphero is available exclusively through Best Buy.