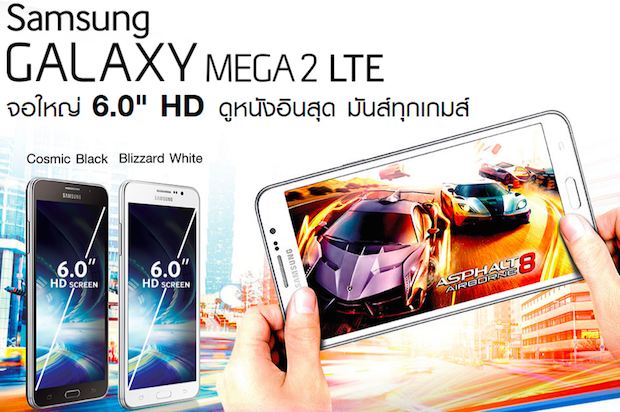 Samsung’s Galaxy Mega 2 has been on our radar for a couple of months but the device has yet to enjoy any kind of official unveiling from Samsung.

The sequel to Samsung’s 6.3-inch behemoth, the Galaxy Mega 2 was made available in parts of Asia last month, and has now shown up on Samsung’s own Thai website. This marks the first time we’ve seen any kind of official spec sheet for the Galaxy Mega 2.

This year’s Galaxy Mega sports a 6-inch 720p display, and it looks like Samsung has decided to stick with just one size this year (last year’s model was produced in both 5.8- and 6.3-inch variants). The Galaxy Mega 2 boasts Samsung’s own Exynos 4415 SoC with a 1.5 GHz processor, 1.5 GB of RAM, an 8MP camera in the back, a 2.1MP camera in the front, support for dual-SIM, and LTE. These specs are similar to the 2013 Mega, but in a smaller and more manageable package given the reduction in screen size.

Though there’s no word on North American availability, price estimates (based on Asian retail pricing) put the Galaxy Mega 2 at around $400, which is significantly less than the original Mega. That device launched at $500 and $550 when it arrive in Canada last August.