Bell and Rogers have been crowned ‘Fastest Mobile Networks’ in Canada, according to PCMag.

The publication unveiled the results of its second FMNC test, which took the team coast-to-coast in what became a half travelogue, half network-testing expedition.

The team used a suite of unlocked HTC One M8’s, which supports speeds of 150Mbps using the Category 4 LTE standard, and a specially-made version of Sensorly’s network data aggregation app.

According to PCMag’s lead mobile analyst, Sascha Segan, the Big Three networks all put in strong showings, but there were areas of the country where one dominated over the rest. “Bell and Rogers do different things well,” he told me. “Rogers appears to prioritize the downlink on its Band 7 (2600Mhz) network, which results in screaming fast download speeds in the centres of major cities. Bell has gone for a more balanced approach,” noting that Bell’s average national upload speeds were some 45% higher than Rogers’s.

All three networks improved in speed over last year’s testing, but Segan and his team found that even in areas where Bell and TELUS share a network, the latter scored consistently lower both the downlink and uplink. “TELUS and Bell should be almost equal,” as they share a network in all but Bell’s 2600Mhz Band 7 deployment. “But the TELUS phones lagged behind [Bell’s] in many cities,” a reality likely caused by issues on the device configuration side.

PCMag also found that while “national” new entrants like WIND lagged considerably behind the incumbents in both speed and network coverage, regional upstarts like Eastlink in Nova Scotia, Videotron in Quebec and MTS in Manitoba have matured to offer considerable value for money in their respective vicinities. 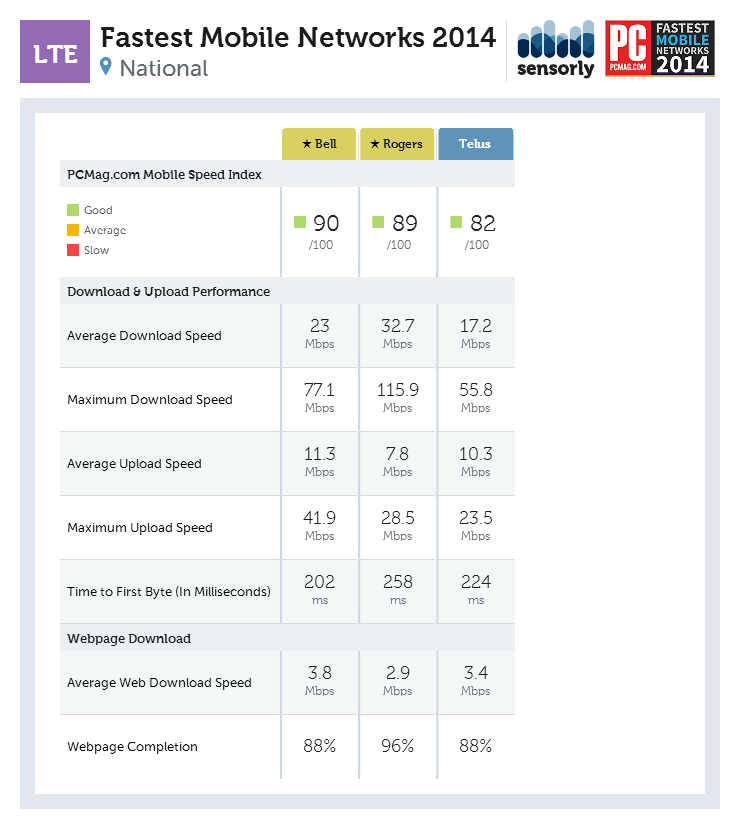 Nationally, Rogers topped the tests at 115.9Mbps in suburban Vancouver (perhaps a case of an unused Band 7 tower with a lot of iPhone users, who, until the iPhone 6/6 Plus, didn’t have access to 2600Mhz LTE), while Bell topped maximum uploads speeds at 41.9Mbps, with Rogers coming in second at 28.5Mbps and TELUS a close third at 23.5Mbps.

Average download speeds were 32.7Mbps for Rogers, 23Mbps for Bell and 17.2Mbps for TELUS. Of course, latency matters just as much as speed, and Bell ended up winning that contest, too, with an average “Time to First Byte” of 202ms, followed by TELUS and Rogers.

Indeed, it appears that Rogers has heavily biased speed over latency across its network, as it likes to advertise being the fastest ISP both on the mobile and cable side.

Rogers was also the clear winner in Quebec, with Bell winning the battle of Southern Ontario and most Eastern provinces. In fact, Bell was so far ahead in New Brunswick that Rogers was pretty much a no-show. Bell and Eastlink battled it out in Halifax, Nova Scotia, with the latter coming in ahead by a wide margin. Similarly in Winnipeg, Manitoba, MTS bested Bell and Rogers (though it shares both 3G and LTE infrastructure with Rogers).

Ultimately, PCMag notes that mobile users in areas with a viable fourth carrier like MTS, Videotron or Eastlink can safely change carriers without sacrificing performance, saving a bit of money in the process, but users in Southern Ontario, Alberta, New Brunswick and parts of British Columbia are best served by Bell. Rogers maintained its performance lead in Vancouver and parts of Quebec, though Videotron encroached on its dominance in that province by offering similar performance at a far better price point.

With WIND Mobile receiving an influx of capital and Videotron poised to launch a national network pending domestic roaming regulation, the chart may look quite different a year from now (though probably more like two years from now).