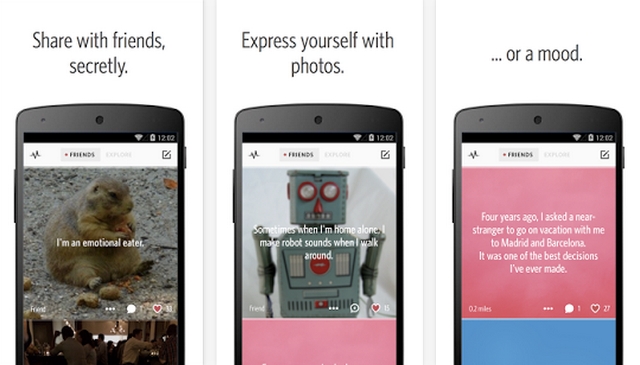 Just four months after a U.S. launch, Secret has made its anonymous communication app available worldwide. Secret’s global expansion brings with it a few new features as well as support for Android smartphones.

For the uninitiated, Secret allows users to post thoughts and feelings anonymously to friends and friends of friends. The new version adds a quick share button for sending posted secrets out across Facebook, Twitter, email or SMS, as well as what the company calls Icebreakers: in-stream prompts to share secrets around specific question or ask them of friends. The Android version of the new app also contains a feature not yet found in the iOS version, separating content from friends and friends of friends with that of users further outside your social graph for easy switching between the two.

The concept of sharing secrets publicly yet anonymously holds little appeal to me, but I’m paid to put my name to my thoughts and words. Let us know if you’re interested in using an app like Secret, or don’t, if you’d rather just keep it to yourself. Download links for both versions can be found at the source links below.

Note: Toronto tech celeb Will Lam let us know that Sara Haider, a University of Waterloo alum, Canadian, and former Twitter/Vine Android Engineer led the effort behind Secret’s Android version. Thanks Will!