Motorola Moto E: the smartphone for the rest of the world, coming in June for $179 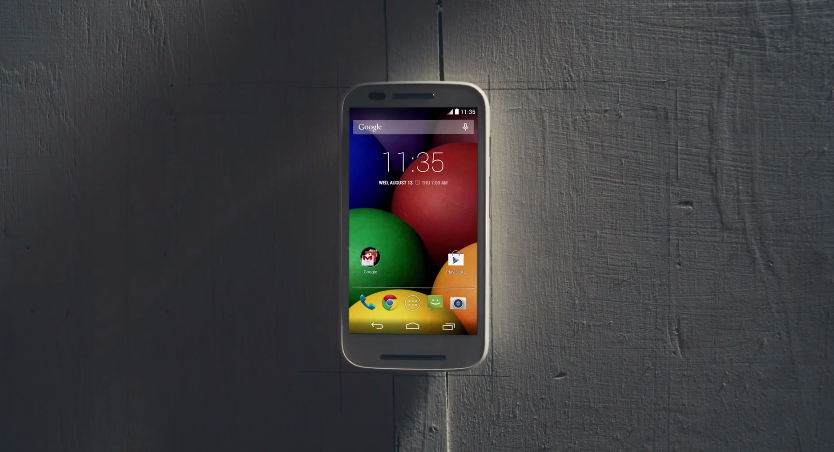 If you thought the Moto G was affordable, wait until you see this.

Motorola has announced its most inexpensive smartphone yet, and the Moto E is a thing of beauty, not for its looks but its accessibility. For $179 CDN, the device is less adorned and considerably more utilitarian that the ultra-sleek Moto X and ergonomic Moto G, but users will still find a reasonably fast dual-core processor, 1GB of RAM, a non-removable 1980mAh battery, a 5MP camera and HSPA+ connectivity up to 21Mbps.

Its 4.3-inch screen offers a qHD resolution of 960 x 540 pixels, but it’s an optically-bonded, low-glare panel covered in Gorilla Glass 3, making it just as resilient as many devices currently on the market. Motorola also promises a modicum of environmental protection, so while it’s not exactly IP67 rated, a bit of rain shouldn’t hurt the device, either.

The 5MP shooter lacks a flash — and there is no front-facing camera — but users will still be able to capture video at 720p, and assign a microSD card slot to augment the 4GB of storage available out of the box.

As for connectivity, supporting 850/1900Mhz and AWS networks, the Moto E will run on practically every Canadian carrier, including WIND, Videotron and Mobilicity.

Running stock Android 4.4.2 with a few Motorola tweaks, the Moto E is going to be a great entry-level smartphone for many first-time phone users. Motorola is also guaranteeing software updates for the device until at least the next full major revision of the operating system — so likely two years.

Available in black or white beginning in June at select retailers, the Moto E will come unlocked and without a contract, an increasingly important checkbox for Canadians concerned over handset pricing. Strangely, the Canadian Moto E will cost $50 more than the American equivalent, which sells for $129. Considering the low price of the device itself, that’s a pronounced and unwelcome markup, especially since the Canadian dollar still 90 cents to the USD.

Motorola hopes that the Moto E, even cheaper than the already-inexpensive Moto G, will be just the right balance of price to performance to steal away many stubborn dumb phone users.  Stay tuned for our full review to see whether that’s the case.