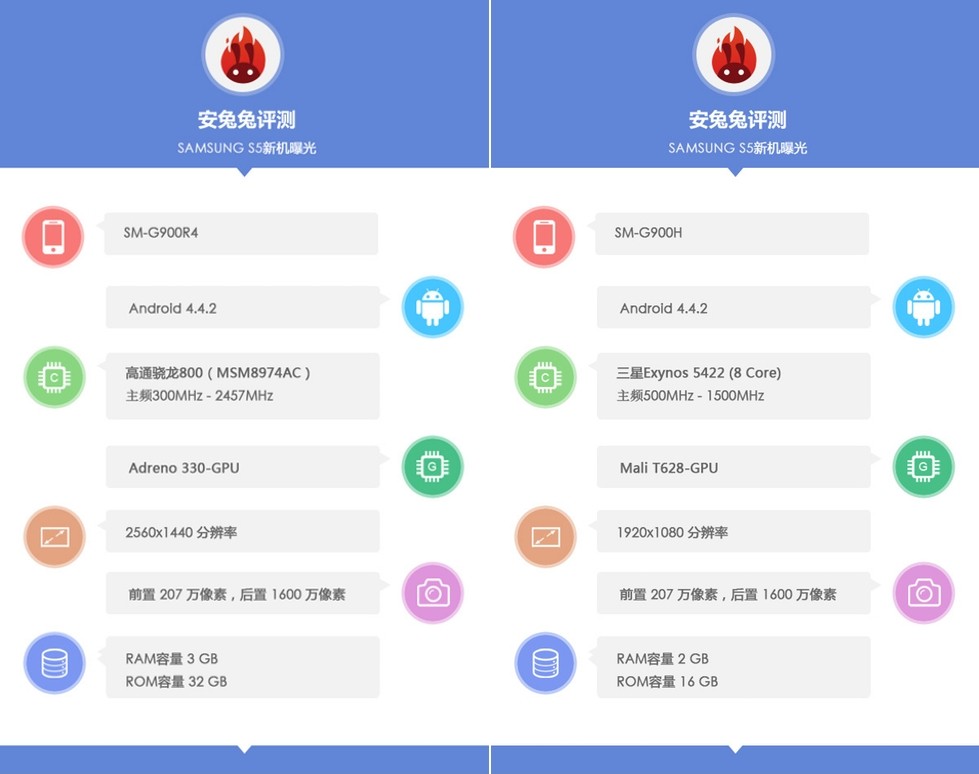 The next Samsung flagship is but weeks from being announced, but early benchmark results uploaded to AnTuTu indicate that, aside from mere chipset alterations based on region or build quality, the company may intend to offer two devices with completely different specs.

Model SM-G900R4 appears to be the higher-spec’d of the two models, sporting a 2560×1440 pixel display, a 2.5Ghz Qualcomm Snapdragon 800 processor with an Adreno 330GPU, 3GB of RAM, 32GB internal storage, a 2MP front-facing camera and 16MP rear camera. The Snapdragon 800 chip, though the same family as that of the Note 3, will be clocked some 200Mhz higher, likely due to better yields on the MSM8974AC SoC.

Another device, SM-G900H, appears to be destined for the European and Asian markets, but unlike Exynos-sporting Galaxies of the past, this one also appears to be aimed at the mid-range market. Indeed, the octa-core Exynos 5422 appears to be a minor bump from the 5420 found in some Galaxy Note 3’s and Galaxy Note 10.1 2014 Edition models, and will sport Cortex-A15 cores clocked at around 1.9Ghz, along with an ARM Mali-T628 GPU. This benchmarked model was clocked at 1.5Ghz, but that likely won’t be the clock speed at launch.

What’s more interesting about this rumoured device is its 1920×1080 pixel screen resolution, along with 2GB of RAM and 16GB of internal storage. It could be that Samsung intends to launch a Galaxy S5 Neo, akin to the recently-announced Galaxy Note 3 Neo, simultaneously with the GS5 itself, or it could be that this is merely a test device destined to never reach the public. Either way, it will be interesting to see how the Snapdragon 800/Adreno 330 duo deals with a 2560×1440 pixel display.

Both models appear to be running Android 4.4.2 KitKat, so at least Samsung is running the latest software.